We no longer live at a time when people have to depend on each other for getting a job done, because of everything back then, basically requires manual labor. Today, the availability of machines has saved the workforce a lot of trouble when it comes to getting a task done. In these modern times, various industries are dependent on their tools like computers, in answering production demands. Modern technology has launched various breakthroughs for decades. This had paved the way for companies to depend on their machinery for their operations. To put it mildly, the equipment that an office has plays a vital role in their success too. But never more so as to how people run them. Sometimes they are effective and pure lifesavers. Other times they can fail you just when you need them to be working perfectly, which is practically every day. You may also see service agreement templates.

Technology has no signs of stopping anytime soon when it comes to providing almost any kind of convenience for both business and leisure. What with the tech giants never running out of ideas in Silicon Valley and trying to outdo each other. It looks like you have not even gotten the hang out of one software that supports your operations, and then here comes another much more promising one. And another. Communication at its finest, is really also about as dynamic as today’s age of information technology, that most companies, big and small rely on it for major areas of business, and rightfully so. 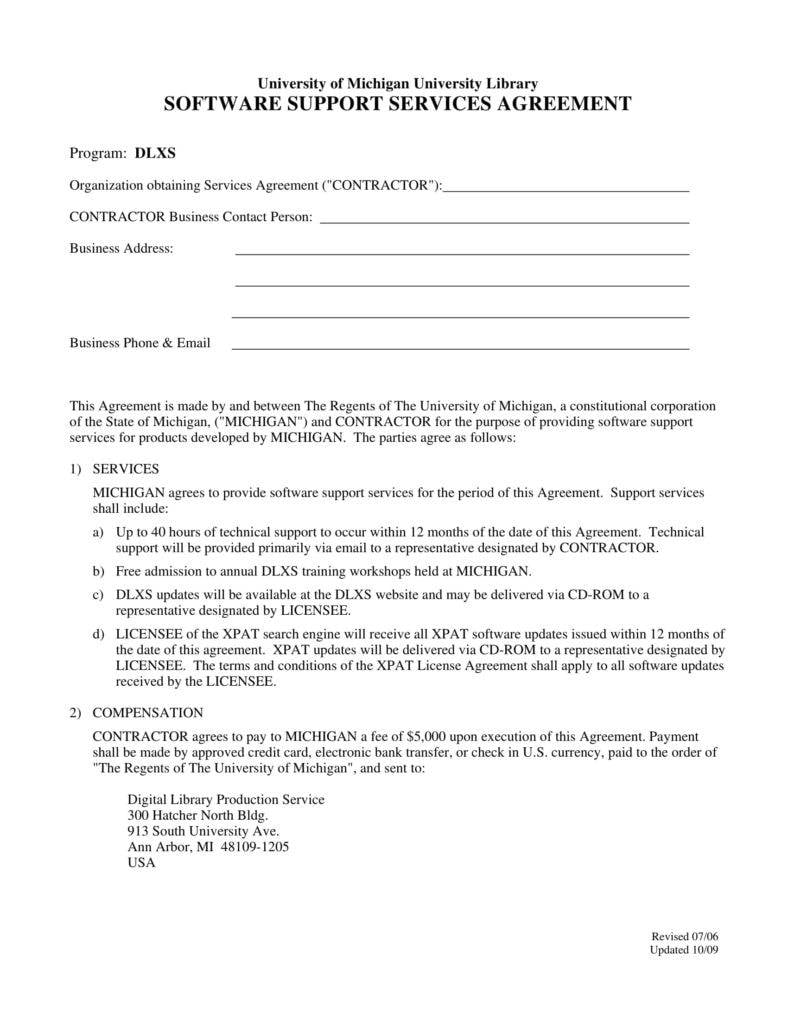 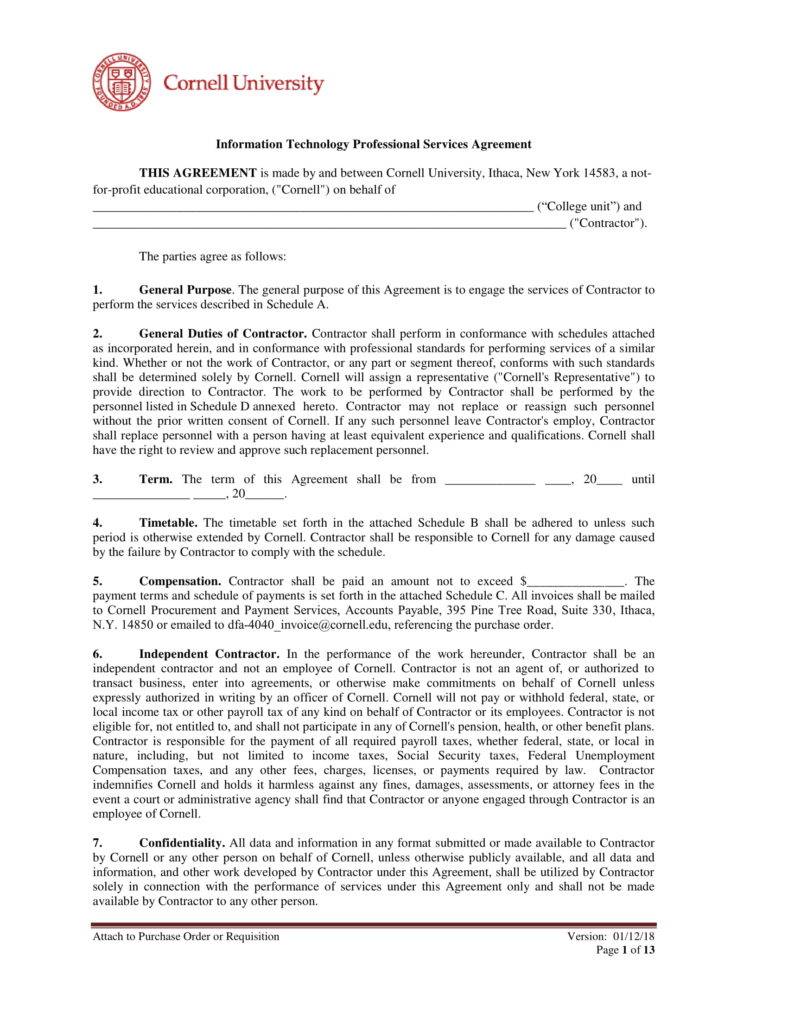 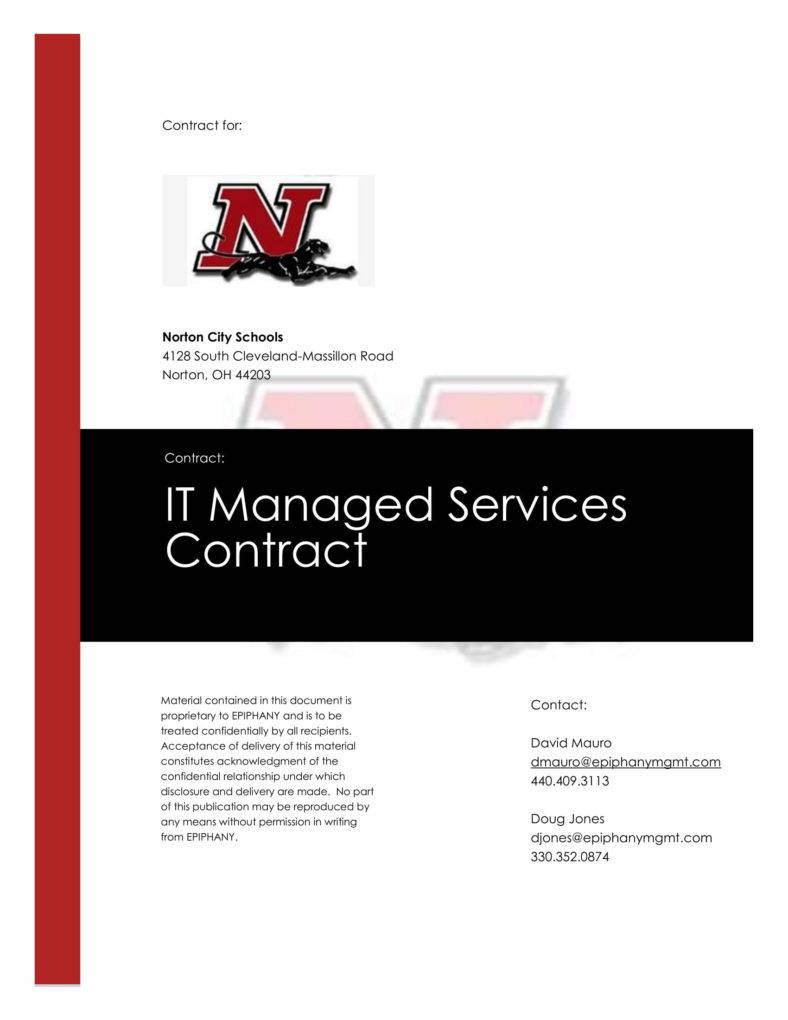 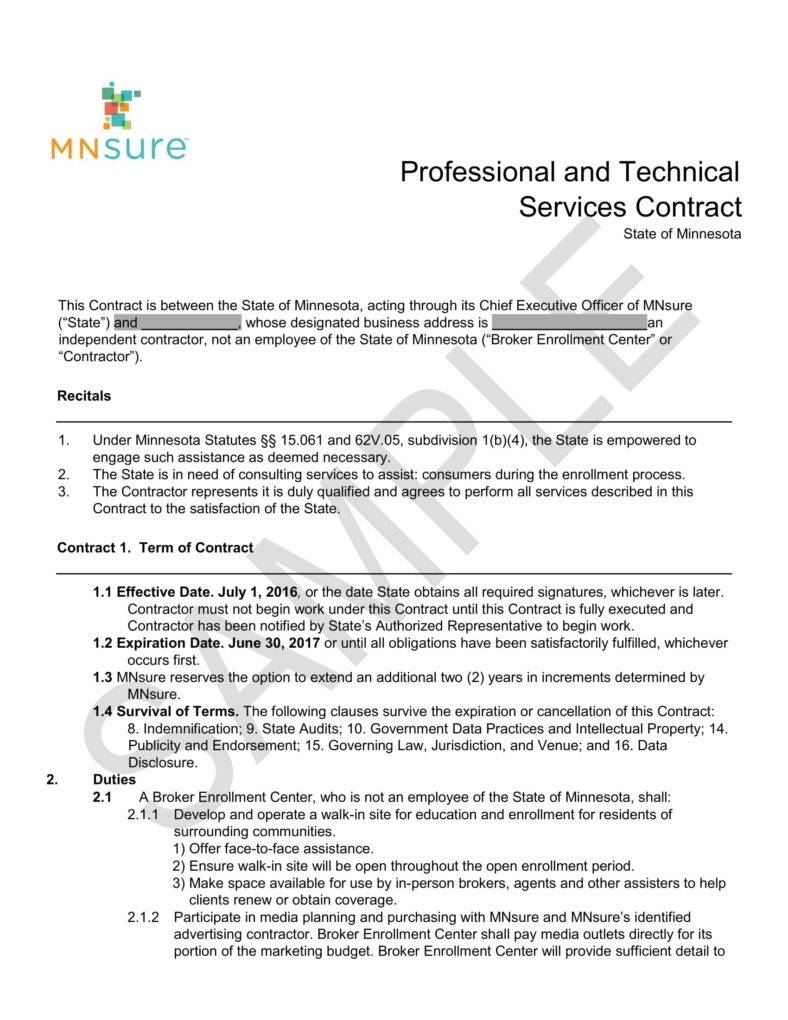 Management should also understand that the demand for services when you do not have your own team of IT experts could work for the business’ advantage. That it is no longer limited to being the work of a single department is a challenge in itself, in managing issues like system errors. Based on studies from Accenture, there are 34% companies that consider the IT team as the main catalyst for business innovation, which is a lesser figure from an astounding 71% a couple of years ago, however, this could be down to the changing infrastructure more than anything else. We see the IT worker of today as obviously tech-savvy, bringing possibilities for the benefit of the organization as a whole and not just limited to one area. As workers have the ability to create and maximize change on an organizational level, the IT we now know defies the boundaries of the not-so yester-years. You may also like simple service agreements. 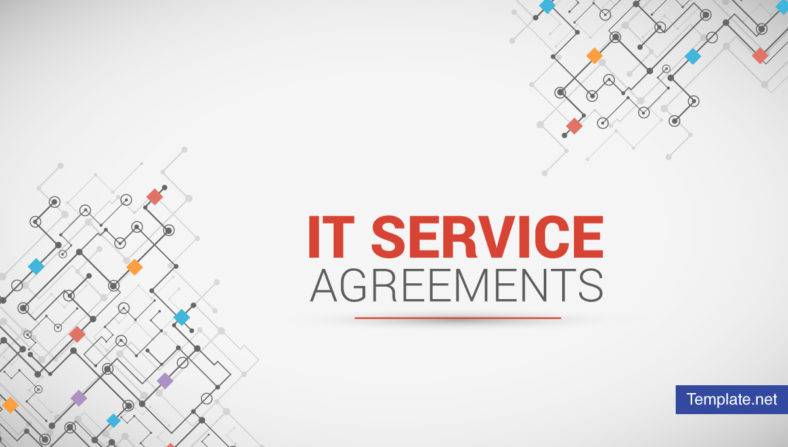 To get the present issues as well as identify future problems with the network, make sure to only do business with professional and credible tech support services, because a stable network system will be reliant on them, thereby increasing productivity and profit in the process. Tech workers don’t just further business goals, they also make change possible at a higher level, in the company. These days, managers and CEOs are depending on their IT professionals to be competent enough for them to also help the business’ marketing strategies. Experts say this is not only a sign of innovation but also a step closer to the future of the internet, where every aspect of a business, or even our lives as people functioning in society, will be done with and through the internet, virtually and literally. It doesn’t come as a surprise at all, with regards to which direction we’re headed to, since we are already extremely reliant on technology, every day, so much so that the computer and the internet make up a big part of the business’ front lines.

Because of this increased reliance, the world of information technology is also in dire need of improving skills for its practitioners, as its role continues to be dynamic, changing and more demanding by the day. Even machines seem to be becoming smarter. It’s only right that we, in turn, should be able to keep up n business, training employees to work with and not apart from them, maybe learn a few basic tricks while they are at it, so that when downtime happens, employees, at the very least wouldn’t panic, unsure of what to do, wasting precious hours. With almost every industry becoming more tech-savvy, IT pros must recognize the challenges that come with tech support so that the people they work with and for, would be willing to adjust to the changing breed of talents if they are to reach an agreement with them.

The organization must make sure to not just support but also lead in helping its team drive its goals further by using its IT support to their advantage. Management of services provided is the stronghold of an organization, meaning you have to include all areas from planning, providing, coordinating, monitoring and reporting the type of service you are getting, and any mishaps, should there be one. It is the same with making sure your tech support service goes as planned, from the contracts to the actual work because this would set the basis for the service and how the process will be delivered. It also establishes security, continuity, and capacity for managing risks of business interruption caused by network issues or other such errors. You may also like service agreement forms.

In this day and age, it is almost impossible to name any business that didn’t benefit from the success of the digital world. Even the most hands-on and manual jobs such as agriculture already acknowledge the need for tasks to be finished faster, and that it is achieved best by using computers as a tool. Records are already digital, as well as strategies and financial planning. In fact, most, if not all, are going paperless, since records are best copied and kept easily by going digital. In the case of most modern day businesses, it is important to get skilled IT technicians on your side, to prevent and manage interruptions caused by inevitable computer and system mishaps. Without information technology as part of a company’s backbone, a business is not going to go far, no matter how much potential it has.

We like to picture that from the beginning, humans were always innovative. However, innovation was a little too slow for the majority of the 20th century. Thanks to thinking tanks and individual geniuses like Alan Turing who should really be spoken in the same breath as Steve Jobs, as we wouldn’t even know the computer science discipline without his contributions in inventing a machine that has the same components as the computer. Brilliant people like him embraced the idea of technological advancements especially when war tactics demanded it. Because of people like Turing, a great proof of the mainstream love affair with innovation began with computers. That was in the early 1930s. Following Turing’s lead, more or less, 60 years later, another Englishman by the name of Tim Berners-Lee introduced the world wide web to the world but the news hardly spoke of it. Most people went on with their lives, not realizing that on August 6, 1991, communication and technology around the world and also arguably our lives, would take a new 360 degrees turn for the better. It wasn’t until the end of the 90’s decade that the internet finally made the rounds and became popular, with companies slowly using it as a part of the way they run a business.

It’s pretty simple really. There is no tool in the world, digital or not, that will be rendered extremely useless and utterly frustrating than a computer that doesn’t work. Whatever is wrong with it, be it the hardware or the network system itself that needs fixing, you will be left staring hopelessly at your screen, waiting for some kind of miracle, because you still have so many tasks to do, using the computer. If t is the network system itself that got damaged somehow, it could lead to more overhead costs, decreased productivity at work and unhappy customers, since you wouldn’t be able to attend to them, whilst the network is experiencing downtime. In short, this situation could lead to extreme profit losses in business. This is especially true for companies whose revenue depend on their Information technology department. With small business owners, dealing with IT issues also strips them of their ability to operate and gain profit, increasing pressure for a maximized pool of skilled IT analysts or tech support workers who can fix issues like this, in the future for the company, in real time. 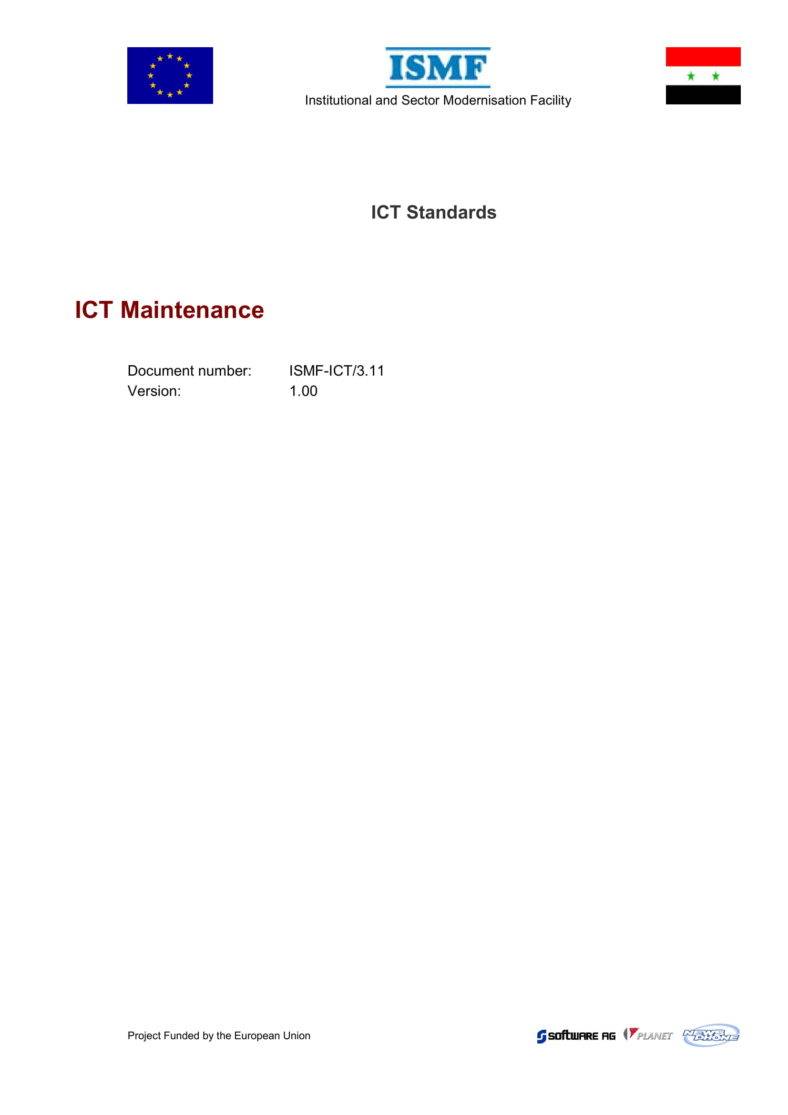 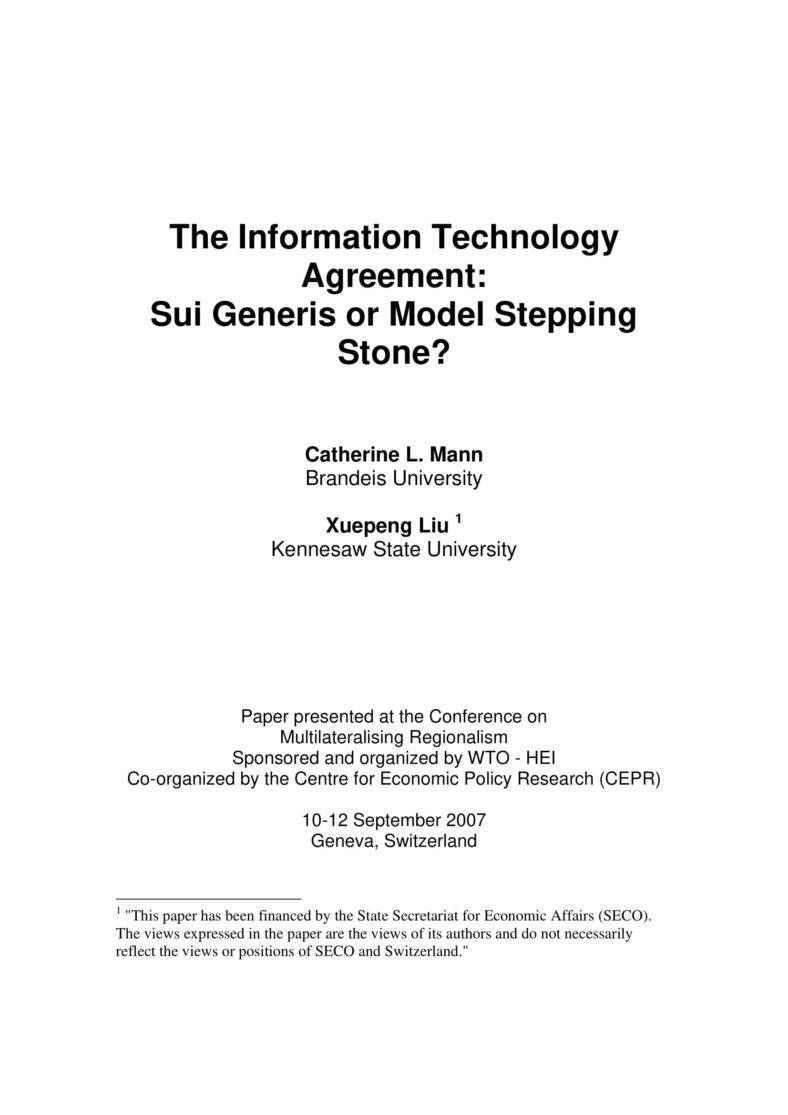 Information technology brings innovation and innovation paves the way for a company to compete in a dynamic industry and be successful. Just like the steam of the Industrial Revolution a few hundred years ago, innovation completes a business’ bread and butter. In the 21st century, the face of business is changing, as we strive to keep up with the ever-evolving technology. Each department in a business demands more pace in multitasking and are becoming agiler by the day. When it comes to information technology, companies are becoming more involved as IT plays roles that far exceeds various industries’ needs and expectations, bringing customer satisfaction, sales and even strategies in business as a whole.