There are situations where one will have no choice but to terminate a contract between him/her and another party. In the event that it happens, then the other party must be sent a termination letter which points out everything from why the contract is being terminated to when the termination will take place. This article will provide you with the information that will allow you to properly create one.

Step 1: Provide information about the company responsible for sending the letter.

The first thing that you will need to do is to place the complete name of the company responsible for creating and sending the letter at the top of the document. Also, be sure to include the company’s address and contact details right below the name.

Step 2: Provide information on who is meant to receive the letter.

Next is for you to place information on the intended recipient of the letter. Make sure to place that individual’s complete name and follow that with his/her position title, the name of the company he/she works for, company address and contact details. Also, include the date in which the letter was made above the recipient’s basic information.

Step 3: Greet the recipient and provide a brief statement regarding the purpose of the letter.

Address the recipient appropriately with either “Mr.” or “Ms.” followed by his/her last name. After the greeting, create a brief statement that points out the reason as behind the letter. Make sure that it gets straight to the point so that the recipient will immediately understand the letter’s purpose.

You will need to provide more details in regards to why the contract between you and the other party is being terminated. Include any names, dates, or even clauses within the contract if deemed necessary. Also, be sure to keep the tone formal to ensure professionalism.

When doing this, provide a statement that contains your contact information and one that tells that recipient that he/she may use it if there are any concerns regarding the contract termination. Finish everything by placing your complete name, position title, and signature at the bottom of the letter. 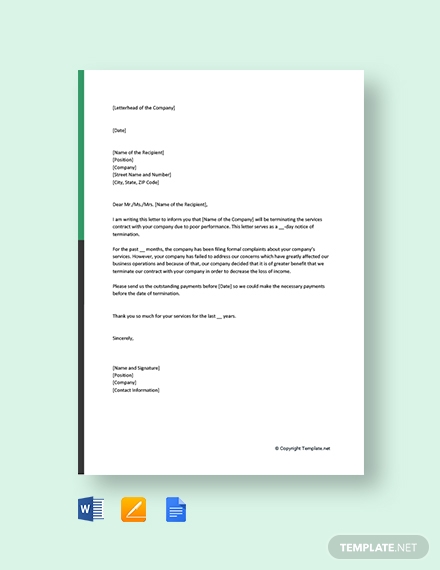 An employee who has continuously failed to deliver in terms of performance may have to be let go. In the event that it needs to happen, then you will need to notify that employee about his/her contract termination. Download this template so that you can create and send a letter that can do exactly that. 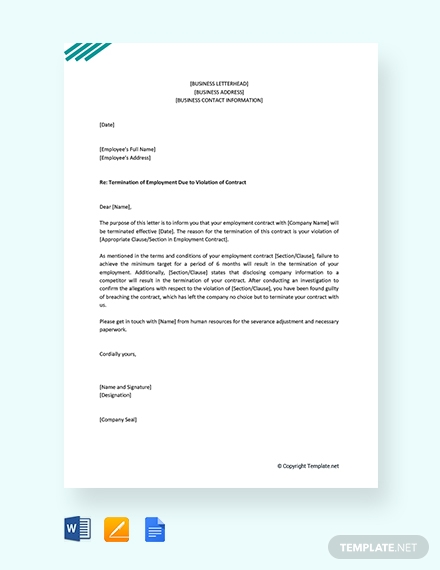 There will be those employees who may have continuously failed to meet standards and expectations or who have broken company rules and regulations. Should you ever encounter one, then you may have to put an end to his/her employment contract. Download this template now so that you can send a letter to an employee whose contract you wish to terminate. 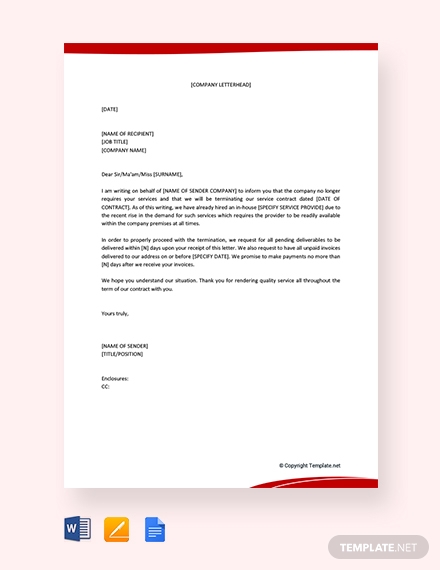 If you have formed a service contract with an individual or business and that it must be terminated due to whatever legal reason, then you will need to notify the service provider about the matter. By downloading this template, you can create the letter which can do exactly that. 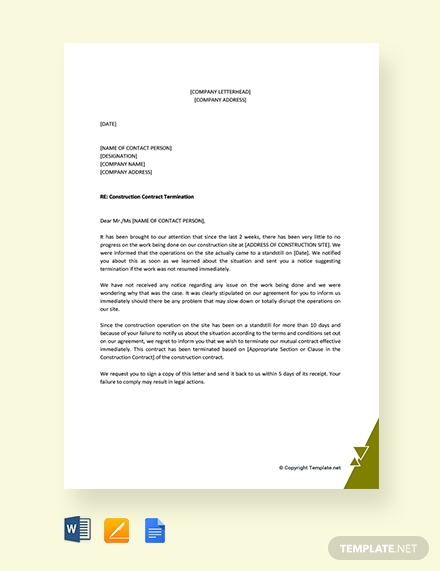 Let’s say that the team you have hired to take charge of your construction project has continuously failed to fulfill their obligations. In that situation, one would terminate the contract between them. Downloading this template will allow you to create a letter that will notify the other party about the contract termination. 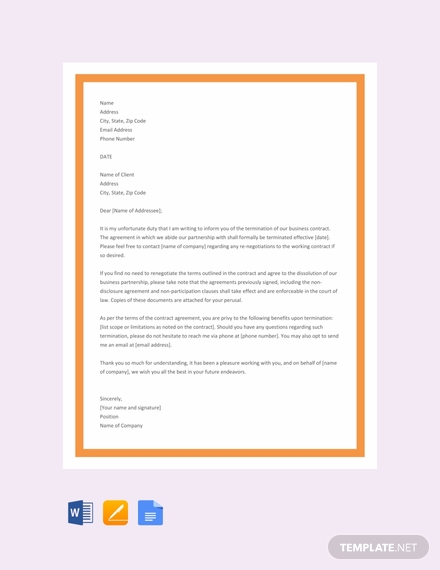 In the event that you wish to end a contract between you and an individual or business, then this is the template for you. Download it so that you can make a letter which tells the recipient the reason as to why the contract is being terminated and other details such as the date it will officially end. 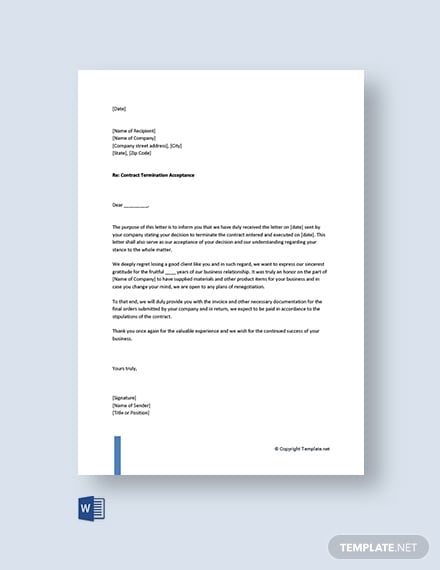 If you were to receive a letter that tells you that your contract with another party has been terminated, it is your decision as to whether or not to accept it. Should you choose to be okay with the termination, then you should consider getting this template. With it, you can make a letter in response to the one that you have received, effectively telling the other party of your acceptance of the end of the contract. 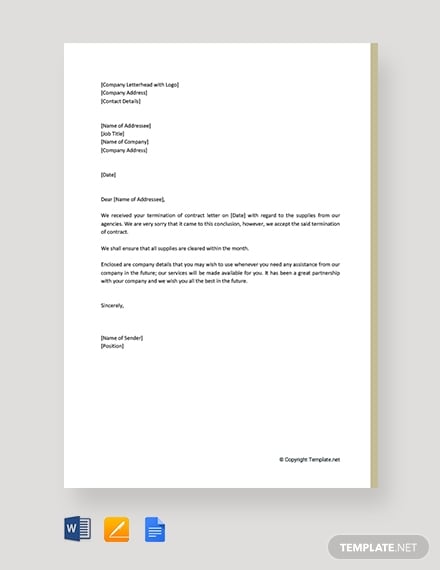 In the event that you receive a letter regarding the termination of a contract between you and another party, then it is important that you respond to it as soon as possible. By downloading this template, you can create a letter that, when in a situation similar to the one mentioned, can be sent to whoever you need 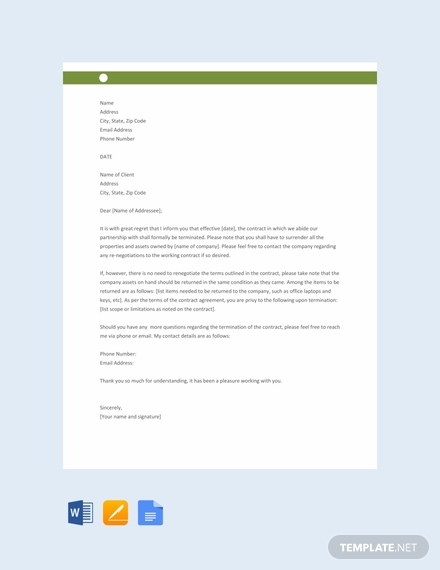 Should a time come that you have to terminate a contract between you and another party, then it is important that the other party is notified about your intentions. Download this template now so that you can start making the letter that can do exactly that. 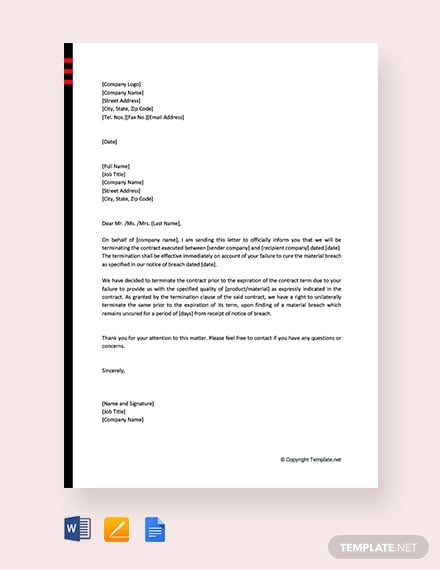 In the event that you have to make a letter that notifies the other party about the termination of a business contract between you both, then be sure to download this template. If you choose to do so, then know that you will need to use either Google Docs, Microsoft Word or Apple Pages or other programs that allow you to open and edit the template. 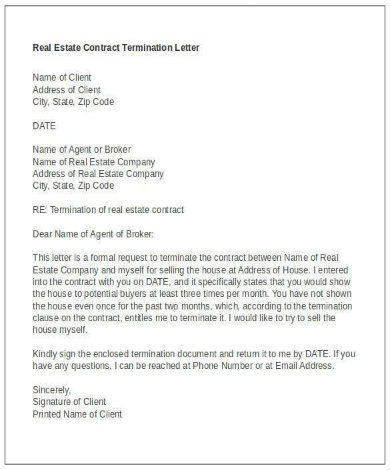 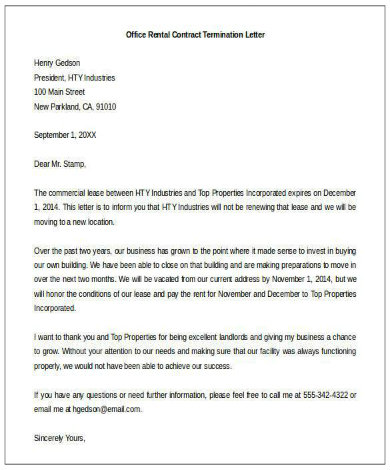 In the event that you wish to end a contract on an office that’s being rented, then consider downloading this template. Get it to make a letter that you can send to the other party involved in the office rental contract to notify him/her about the contract termination.