11+ Time off to Vote Policy Templates in PDF, Word

In 1776, voting was controlled by individual state legislatures and only white men aged 21 and older who were landowners, were allowed to vote. Since then, the American voting system has changed considerably, and it took a long hard fought battle over the years, before every American citizen, regardless of class, gender and color finally had the right to vote for people who would represent them and their voices in the government. You may also see the policy templates.

In April 1789 the first person elected as president of the United States, George Washington noted in his diary: ‘I bade adieu to Mount Vernon, to private life, and to domestic felicity, and with a mind oppressed with more anxious and painful sensations than I have words to express.” Personifying the principles by which his generation lived by, George Washington, had been given the unanimous vote of the new nation’s electors. You may also like the policy samples. 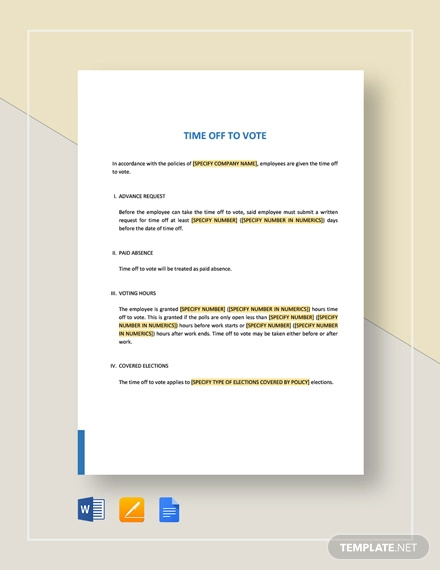 Time off to Vote Rule 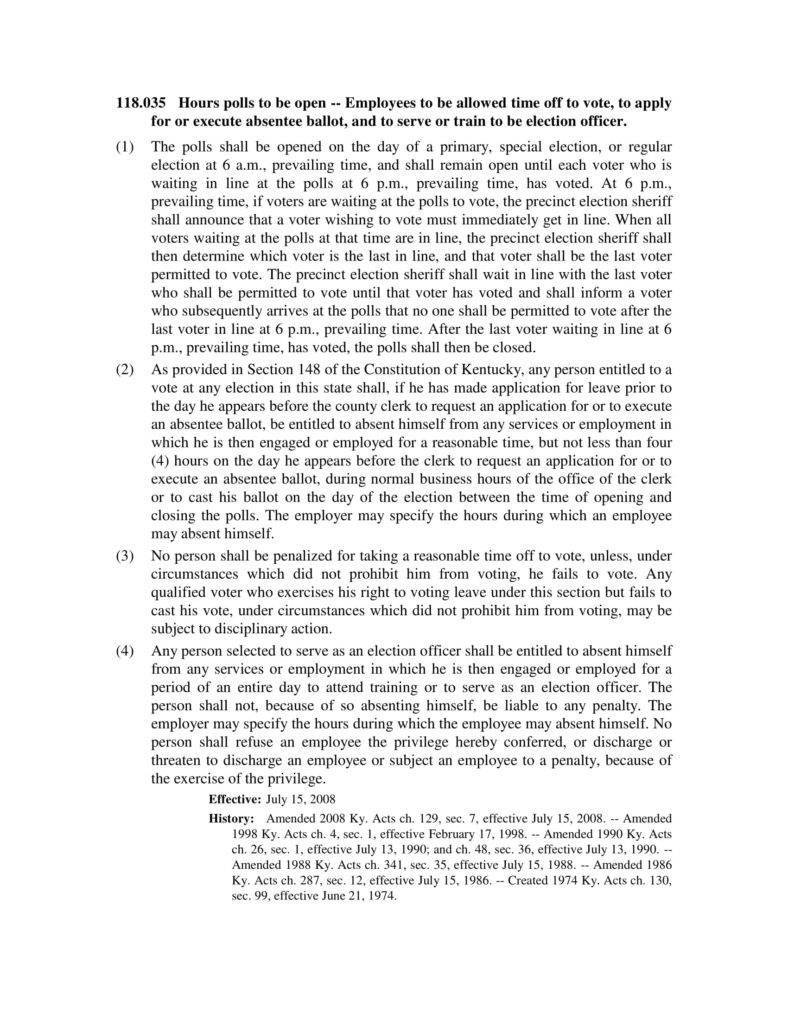 Time off to Vote Announcement 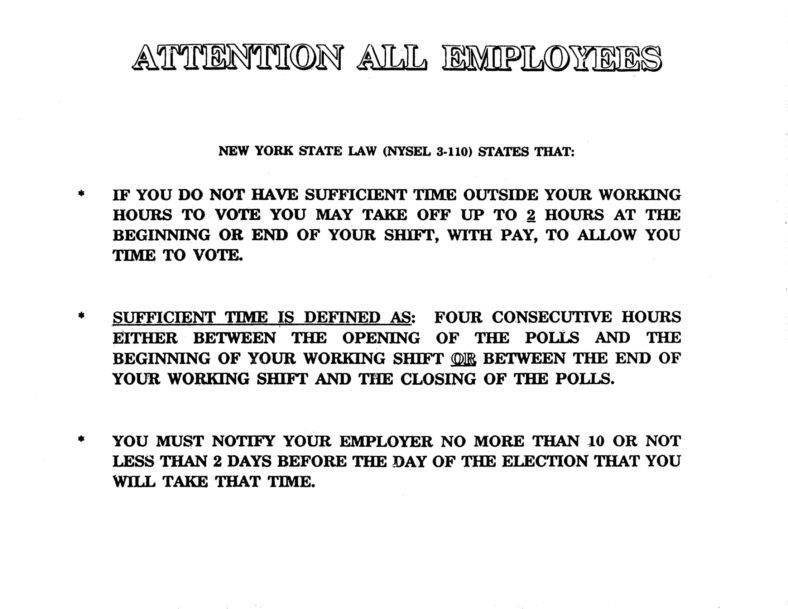 Time off for Voting Procedure 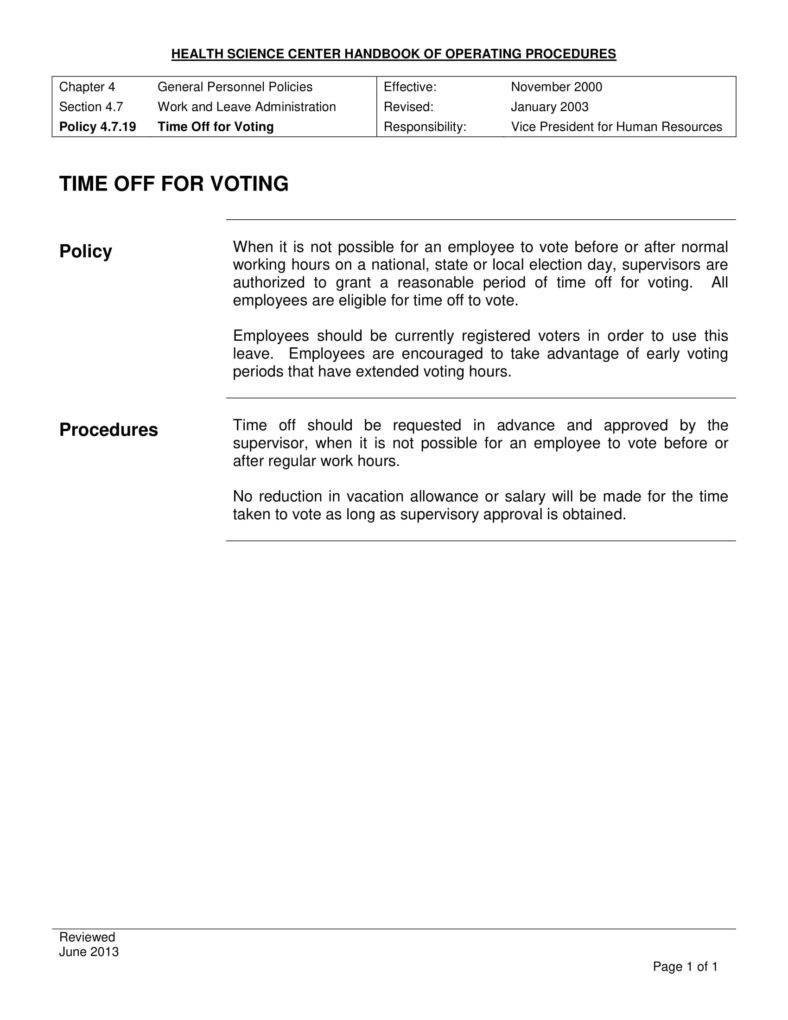 Today we see politicians with an almost no holds barred campaigns because a campaign is an important part of an election. The last presidential election would be a great example to that. Not only did America watch, the entire world watched along with them as both candidates from both the parties tried to outdo each other in both their campaigns. A year later, many of us still cannot get our heads as to what happened. We really haven’t fully recovered yet, from the nausea of the 2016 Presidential elections.

Perhaps it will take years for Americans and their leaders to understand what exactly happened during the elections. But that’s only a part of it. Because the rest of the world cannot yet grasp whatever would come next, with the influence of the media, and a president who is larger than life when it comes to social media interaction with both his people and the citizens of the global community.

It is interesting to note that Washington did no campaigning and didn’t need any effort whatsoever to promote himself as a presidential candidate. Based on those lines he wrote in his diary when he was sworn to office, he accepted the task of being the first person to lead the New World, not exactly sure of himself but with every intention of fulfilling his responsibilities. Any sign of reluctance and personal misgivings was masked by how smoothly his term went in office that I’s imminent success was received with another unanimous endorsement in 1792 by the electors.

Today everybody has an opinion about the first year of the Trump presidency but regardless of opinion, the result of the votes should speak for the voters. Whoever wins, is on the people. Whoever wins an election depends on what the people and those who represent them, decides. And, it can’t be decided if you don’t exercise your right to vote. You may also like the privacy policy templates. 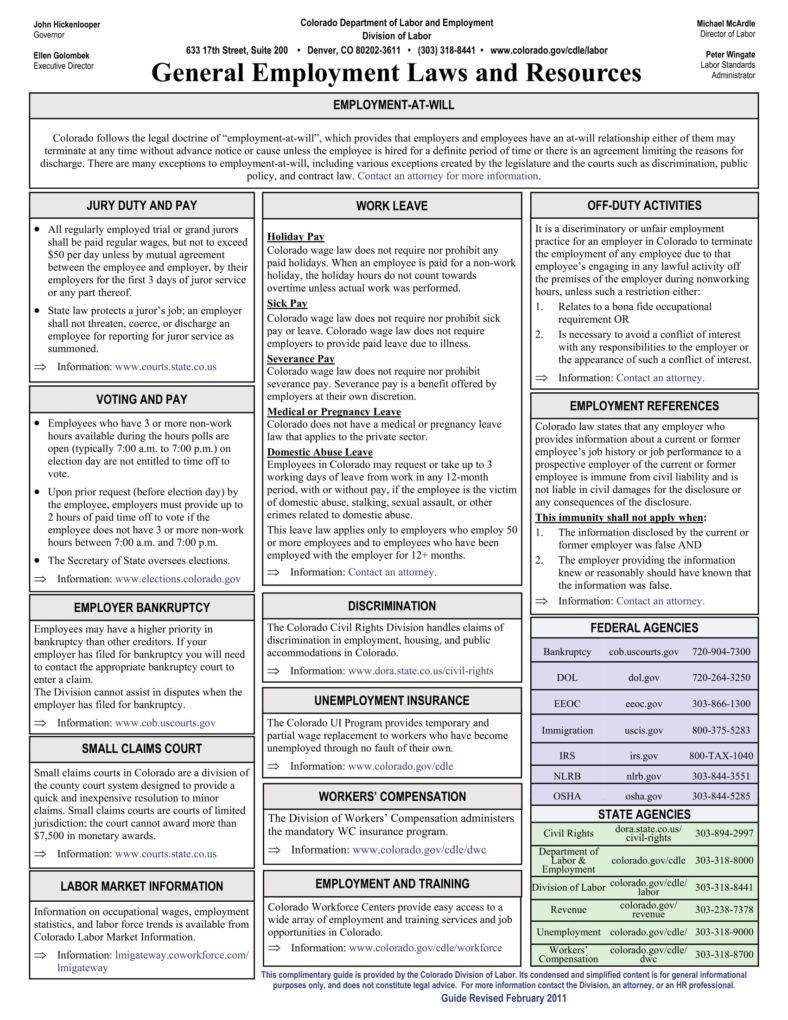 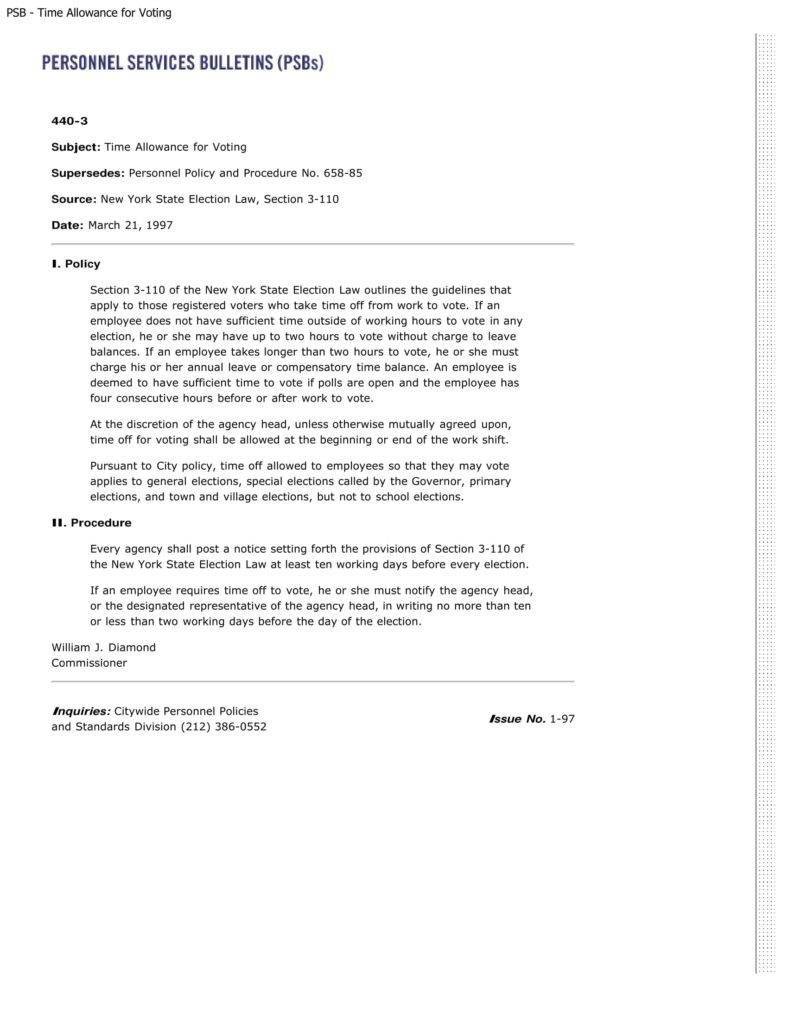 Time off for Voting Policies 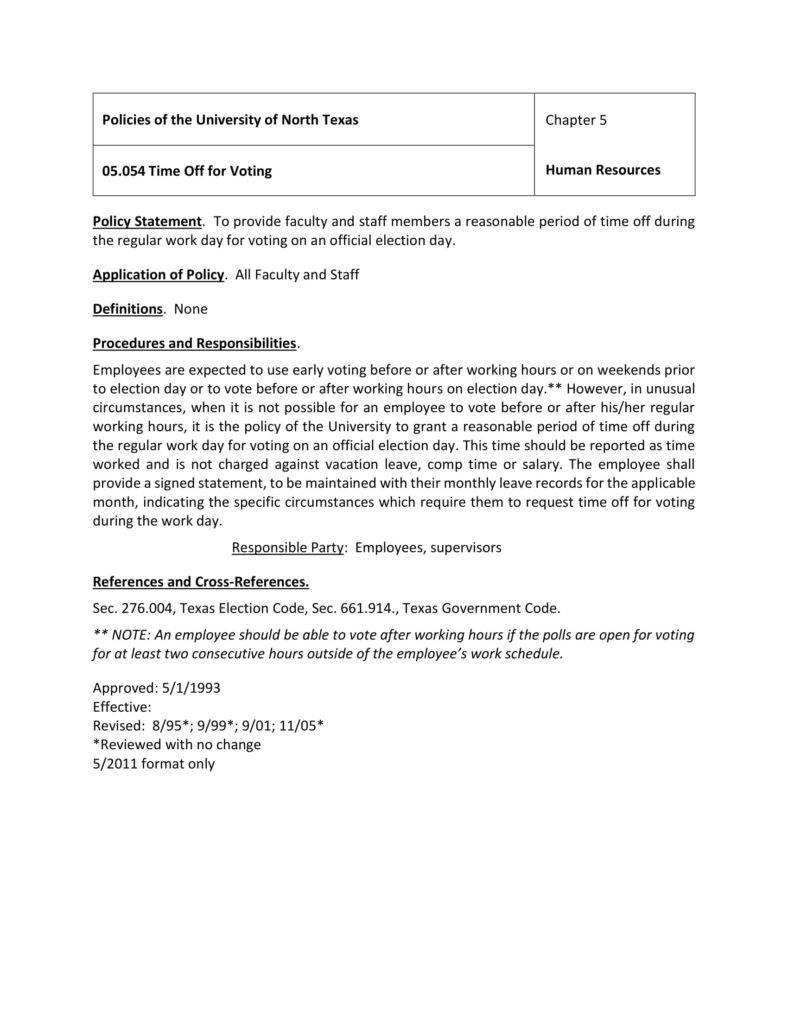 As it did in 1789, the United States still uses the Electoral College system as established by the U.S. Constitution, which at present gives all American citizens over the age of 18 the right to vote for electors. These electors then are required to vote for the president and whoever wins the electoral vote, wins the presidency and the vice presidency, whether or not they won the direct popular vote. The two people who will take the seat of the two highest positions in the government are the only ones decided by the votes of the Electoral College. The rest is decided by direct popular vote.

Over the years, the Electoral College has been met with criticisms from both sides of opposing parties. In 2016, many people took to the streets to protest Democratic Party’s Hillary Clinton’s loss. Majority of them argued that the people voted for Hillary and not Donald Trump. The Electoral College has a winner-take-all system that critics argue to be an edge for a candidate to be elected president even he loses popular votes by a great margin, which was the case with Donald Trump. Supporters of the electoral system have a pint though. When you take out the Electoral College, heavily populated states get to decide every presidency and the voices of people from the fewer population would be ignored in the process. You may also like the policy templates in a word.

Elections are the stronghold of the modern democracy. It forms the foundations by which a country would and should govern its people. This is probably why more than any other country in the world, the United States schedules and holds elections every year. Every year people complain and a democratic country’s people have every right to dissent if that’s what it would come down to. And, every year the turnout of voters doesn’t even come up to 60%. Some claims it wouldn’t make a difference.

You thought your vote wouldn’t count for much. You thought wrong. Elections decide a country, and it’s people’s direction. And, one cannot emphasize the importance of the elections in the most powerful country in the world enough, so much so that for years, the United States elections has taken up most of the media coverage on world politics, as the global community wait how foreign and economic policies will be decided, since it is as equally important to them as it is to the Americans. No one can question the involvement of modern voters to their government and their politics but you only have to check the turnout of votes in the United States for the past few years to realize that something isn’t right. You may also like the time off policy.

Voting is an important process in making sure that the system of a government works to suit the democracies where the Declaration of Independence has especially been founded on. It is only through elections, that people get to decide who represents them in the government, and it is only through voting that they stand a chance of choosing who will lead and serve them, be it local, official, national representative or the president.

No matter the result, at least you get to rest at night, knowing you did your part in choosing the country’s leaders, especially that in total, on all levels of government in the United States, more than 500,000 people are elected, filling up the government offices. However, CNN has reported that the voter turnout has reached a 20-year low. In 2016, more than 58% Americans came out to the polls to cast their vote. But 58% is still very low, considering that in 2008, 64% of voting age citizens had cast a ballot. You may also see the holiday vacation policy.

More than half of the voter population were able to vote, but do not let that figure deceive you. The politicians will use apathy as an excuse but the number of people using social media as a platform to air their views will tell a different story. Most Americans care enough to vote. And, they probably cared enough to vote in the recent elections more than the past years. There are other challenges to the voting population that keep them from the polls, no matter how much they want to be there.

One of the major setbacks is the fact that election day is always a working day. Sure, the government has emphasized the importance of getting their citizens to cast their votes but it might not have been enough to encourage the working class. The threat of having wages chucked out of them for the number of hours they will be gone just to vote, is enough to make them decide against it, especially that the regular millennials nowadays, live from paycheck to paycheck to pay debts and bills. You may also see the leave policy templates.

Depending on the nature of their jobs and company policies, everybody, of course, have different contracted hours, but it’s not that hard to see that voters turnout would be improved if employers will exercise more flexibility with their policy regarding elections. Not only would this help ensure everyone who wanted to vote could, but there’s also a good chance of raising the figures.

Voting is the cornerstone which a democracy, especially the free world’s democracy, stands on. The fact that almost half of eligible American voters aren’t able to vote isn’t a good sign for the future of its democracy. Among the 35 countries in the Organization for Economic Cooperation and Development in voter turnout, the U.S. ranks 31st, near the bottom. It is not half as embarrassing as it is dangerous. It weakens not only the system but the people’s trust in its government as well, and if America would want to be the world leader that it is known for, then it’s about time this changes. 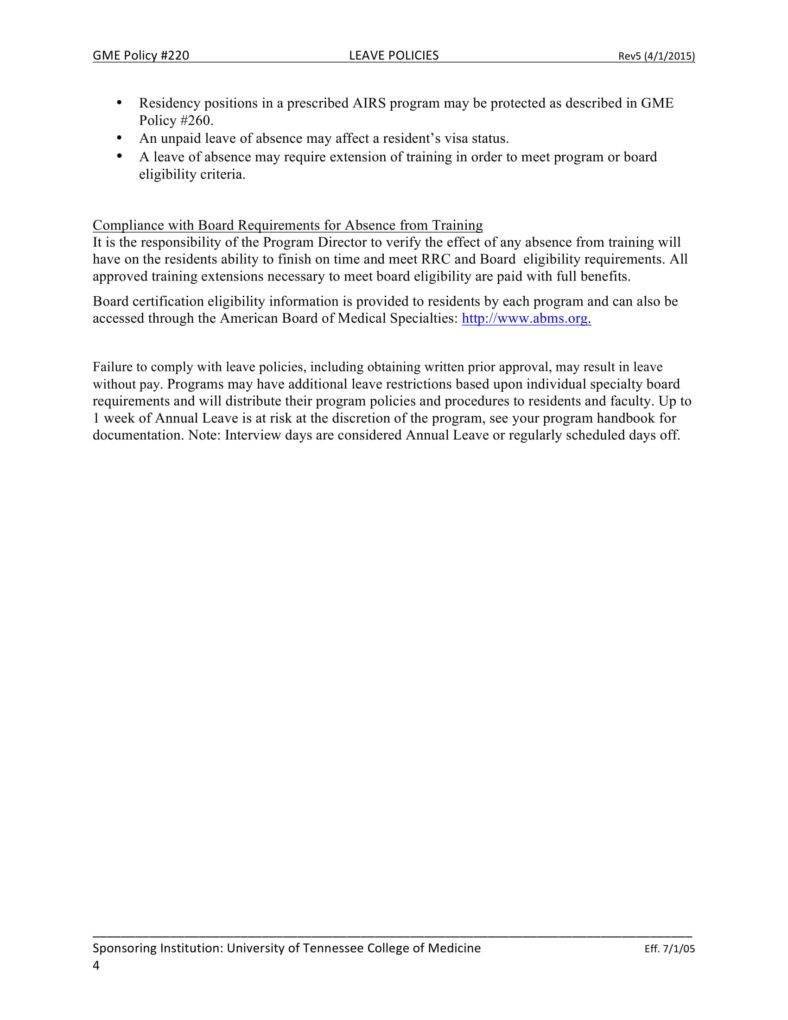 Time off and Vacation Pay 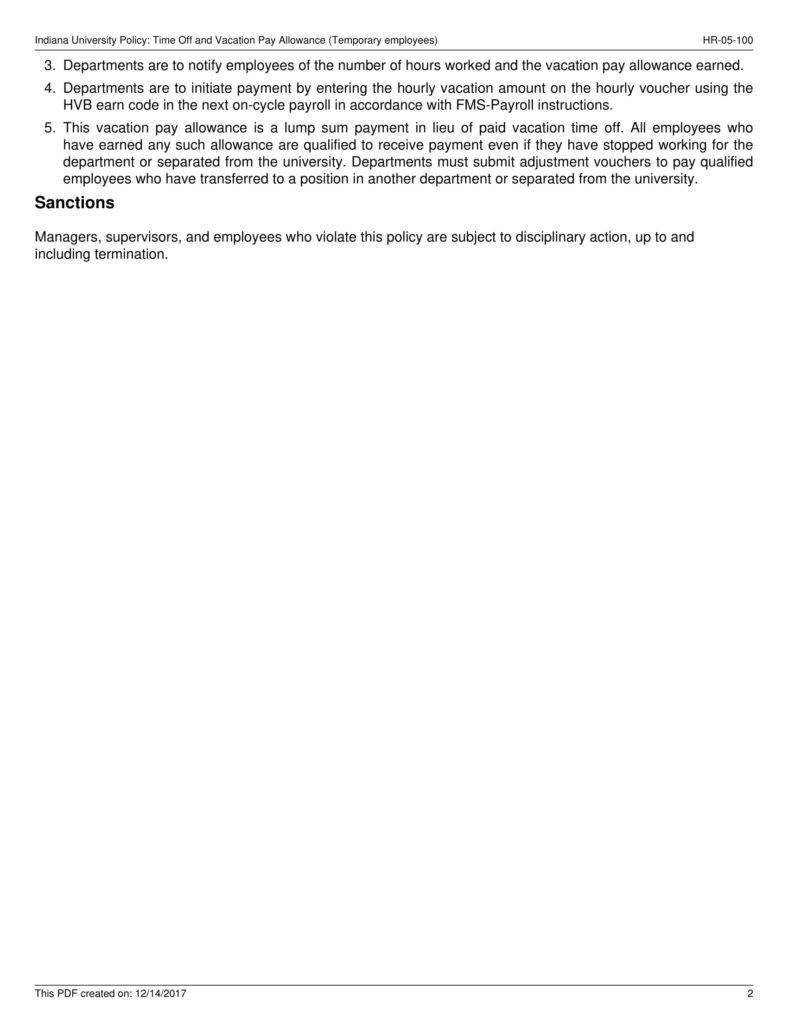 Notice of Time off to Vote 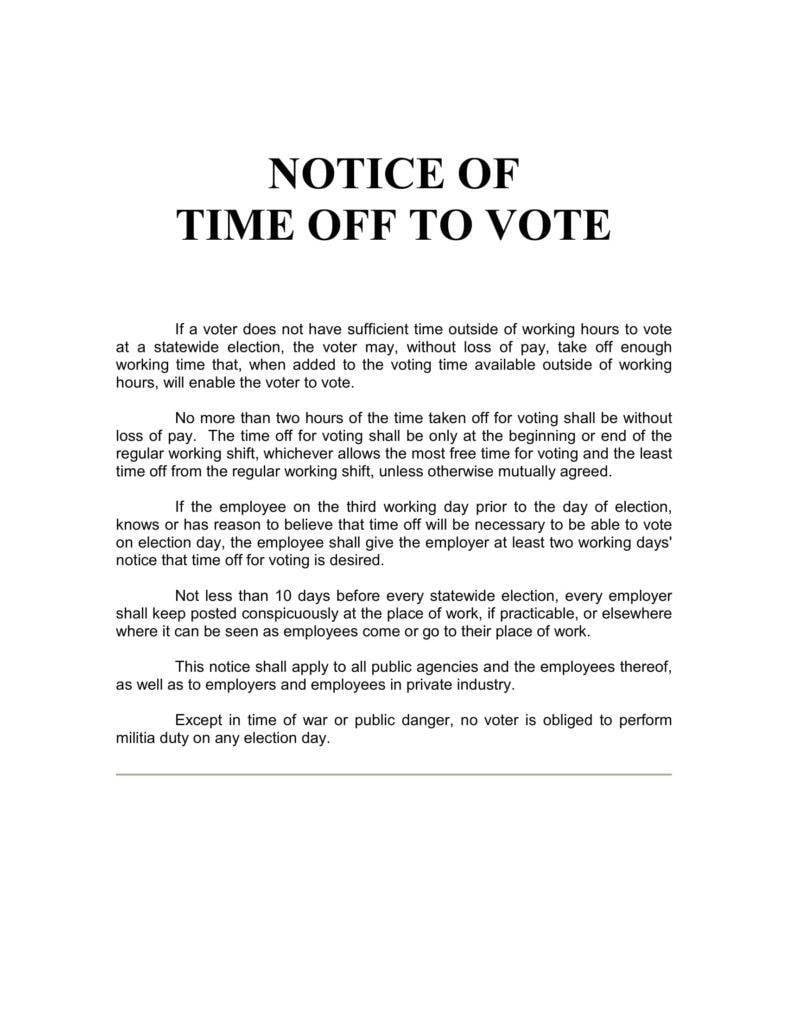 Time off to Vote Memorandum 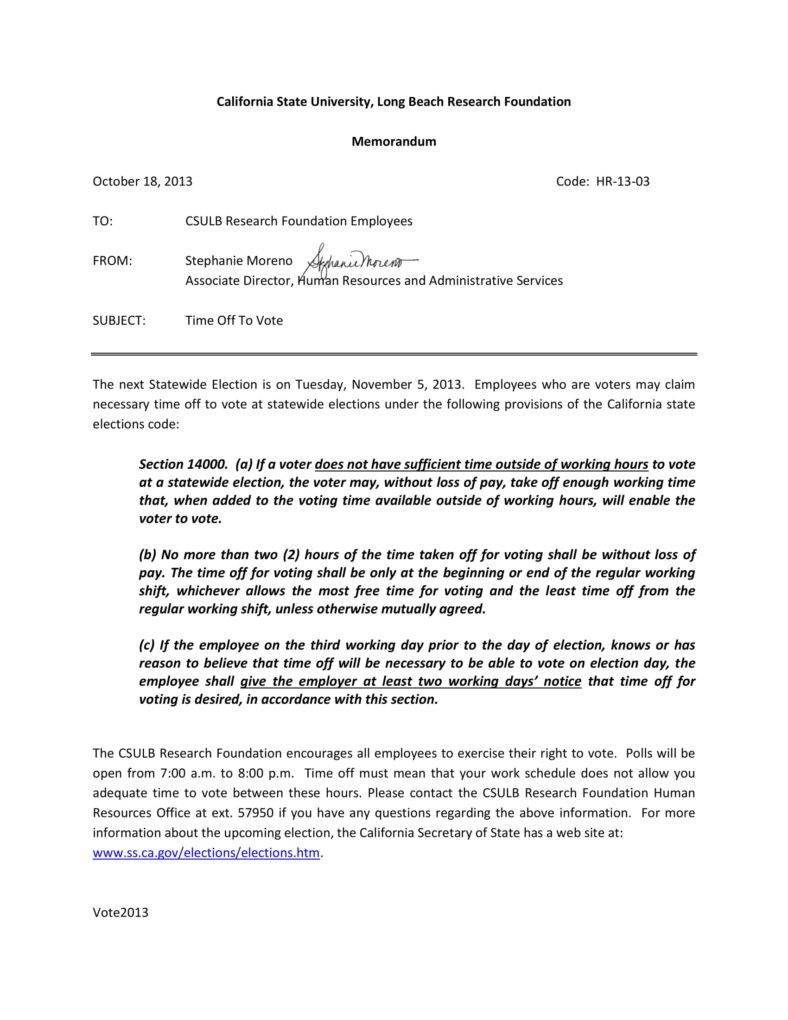 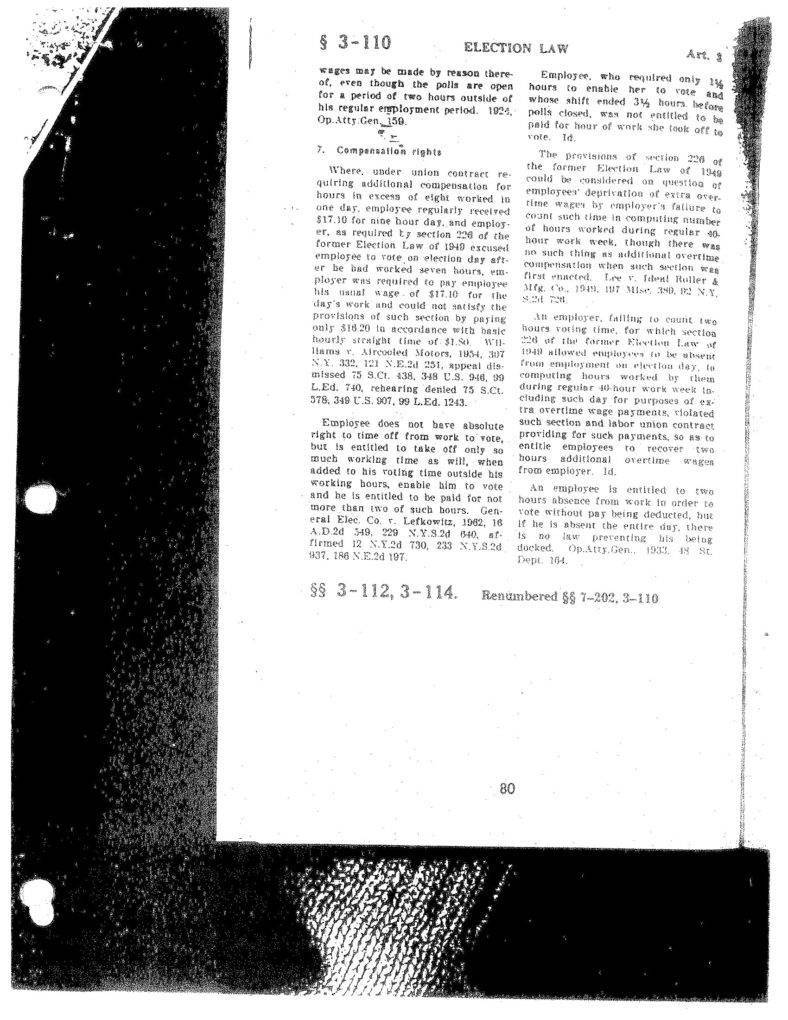 If the legislators can’t, then maybe the people, the employers, at the very least, would be able to show that they care, by exercising a fair time off to vote policy that won’t only benefit the workplace but the employee’s overall involvement in the functions of the company as well. An employee who can exercise his right to vote, without fear of heavy sanctions would be a productive employee and an equally productive citizen.

For more than a hundred years, America has fought a long hard battle for equal voting rights. People have gone to jail, tortured and beaten just to gain the same rights as the privileged, ruling class. Women took to the streets, men paid their dues in blood, sweat and a great many tears.

Our forefathers didn’t pay with their lives just for the present generation to treat the right to vote as the privilege and luxury that it isn’t. You may also like the guidelines for policy templates.