Conflict of interest is common around the world. These are things everyone has already experienced. One of the most common scenarios where this happens is when your wants and needs don’t matter to your parents thus leading you guys to argue. Another could be with some of your friends who want to eat at an expensive restaurant but you just want to eat cheap food for the moment. Conflict of interest is not only present in the real world but also in the corporate one. You may also see HR Policies.

In the corporate world, there are always circumstances that people will let their personal biases get in the way of their way. This, on the other hand, does not suit well for companies. They even try their best to avoid these certain situations. In the next few paragraphs, you will read about what is the meaning of conflict of interest, view some templates of it and what are examples that show the conflict of interest and how you can avoid it in the company. 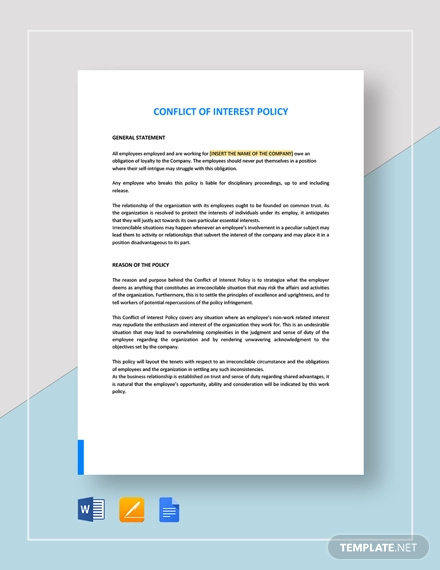 What is it and what are some examples?

A Conflict of Interest Policy is basically a policy that companies adhere to not let the employees’ forget their responsibilities and let their personal biases get in the way of the company’s interest. Conflict of interest happens when an employee can personally benefit from their position in the workplace. When things like this happen, it won’t only affect the company, but will also ruin the reputation of the parties and involved and would stir a grapevine communication between the employees. Below, we will show you some examples where the conflict of interest happens in the workplace: 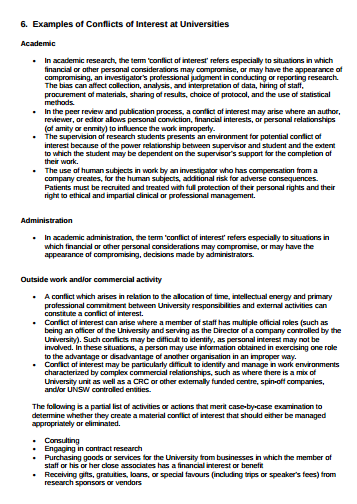 To give you a more clear vision of what compromises the Conflict of Interest Policy, we will provide you the general parts and give them, of course, a definition. 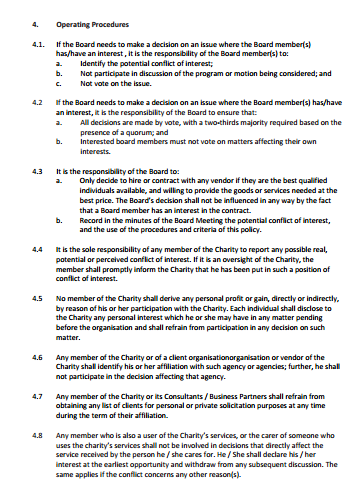 If you’re a manager or a supervisor, there are always ways and means on how to prevent these conflict of interests from happening. But take note, this requires a great amount of effort and consistency in order for this to be achieved in the workplace environment.

Drafting policies like this might be tricky but eventually, you would find out later on that it is needed. A  lot of bad things can happen if the conflict of interest happens in the office. The reputation of the company and its people are also at stake because someone just decided to turn bias all of the sudden and forgot how others would feel. So, when you draft your policy, if ever you’re planning to make one, make sure it is clear and concise and be firm about it. What I mean by being firm is when you have the ability, regardless of what position you are in the office, to remind the employees of the existence of the policy. With that being consistent, your company will be in good standing.