When we throw a party, we will always need to make use of something that will inform people about it, how else will you be able to gather attendees if people don’t even know that your party exists? There are numerous ways on how to let people know about your event, you can do it through party flyers, posters, or party invitations, but if you wish to broaden your choices, even more, you may want to check for announcement templates as well.

If ever you decide on using announcement flyers or any other tool to promote your party, then we have just the thing for you. Below is a collection of various party announcement templates that we have gathered from the internet. Feel free to look around, you may be able to find not just one but multiple design templates that will work for you. 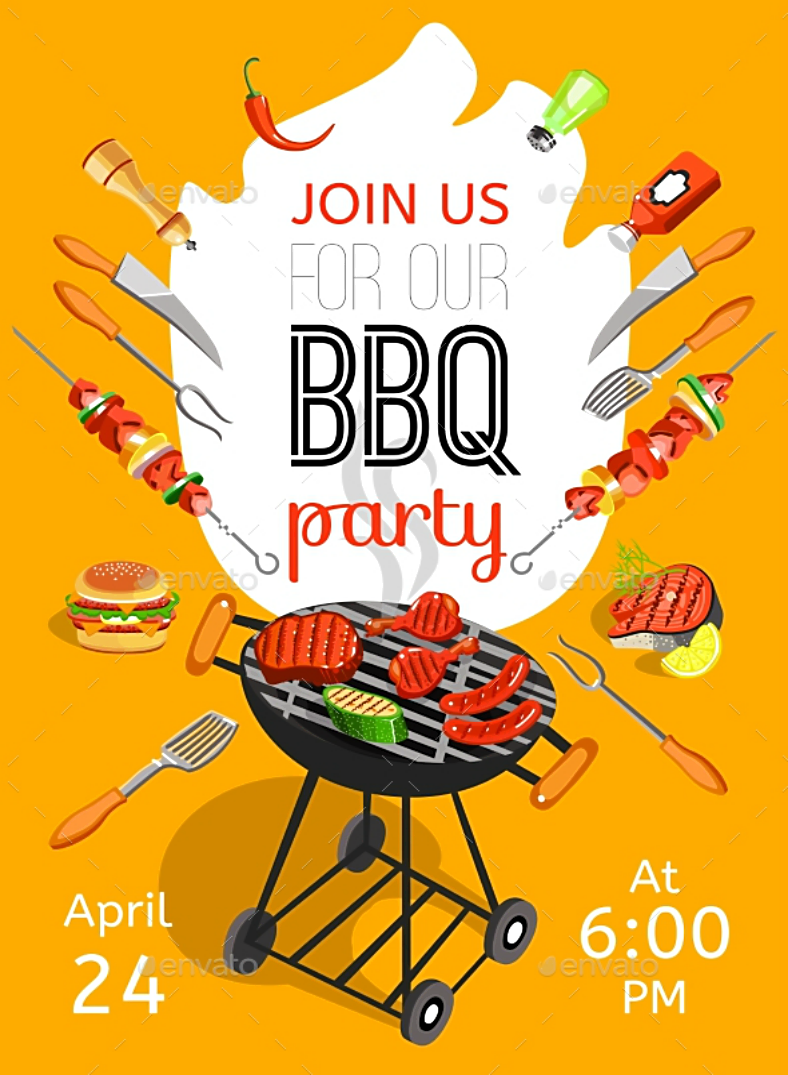 Planning to hold a barbecue party? Want to make it known to people in the most time-efficient way possible? Do it with our announcement poster template. As you can see from the image above, it shows an illustration of a barbecue grill from an isometric point of view. Surrounding the grill are a variety of foods that are usually served in barbecue parties, some condiments, and some tools that are used for cooking such as knives and spatulas. If you want to make use of an announcement poster that is sure to grab the attention of your audiences, then don’t think twice about downloading the template above. 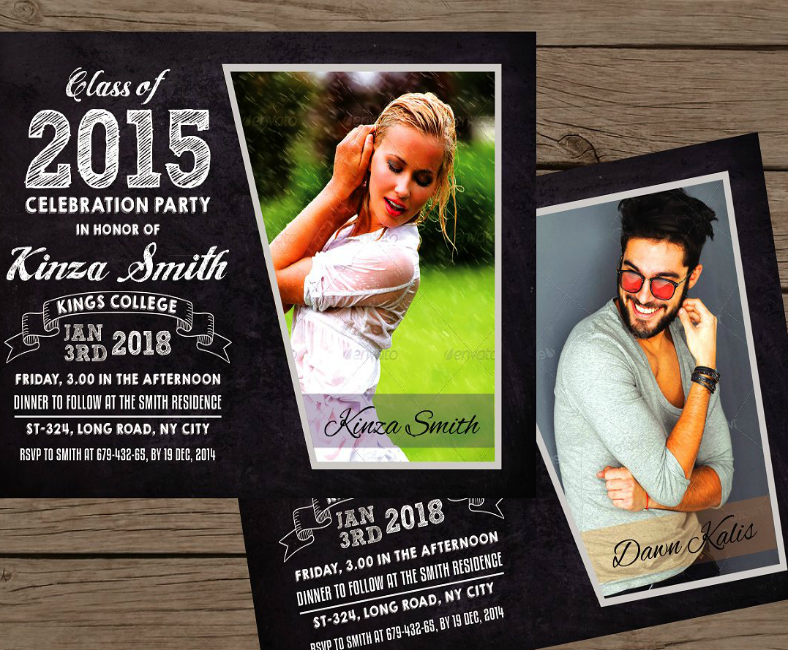 Graduations come only once in every chapter for school-aged children and teens, though the most meaningful of them all would probably be the one after college since it is considered as the final phase wherein a person formally goes to school. Which is why college gradations are indeed worth celebrating because it closes the entire story of a person’s life in school and opens an entirely new book that talks about their experiences and struggles in the real world. But enough about that, if you are planning to hold a party, then the graduation announcement card template above would probably be the most appropriate considering it has a chalkboard theme. 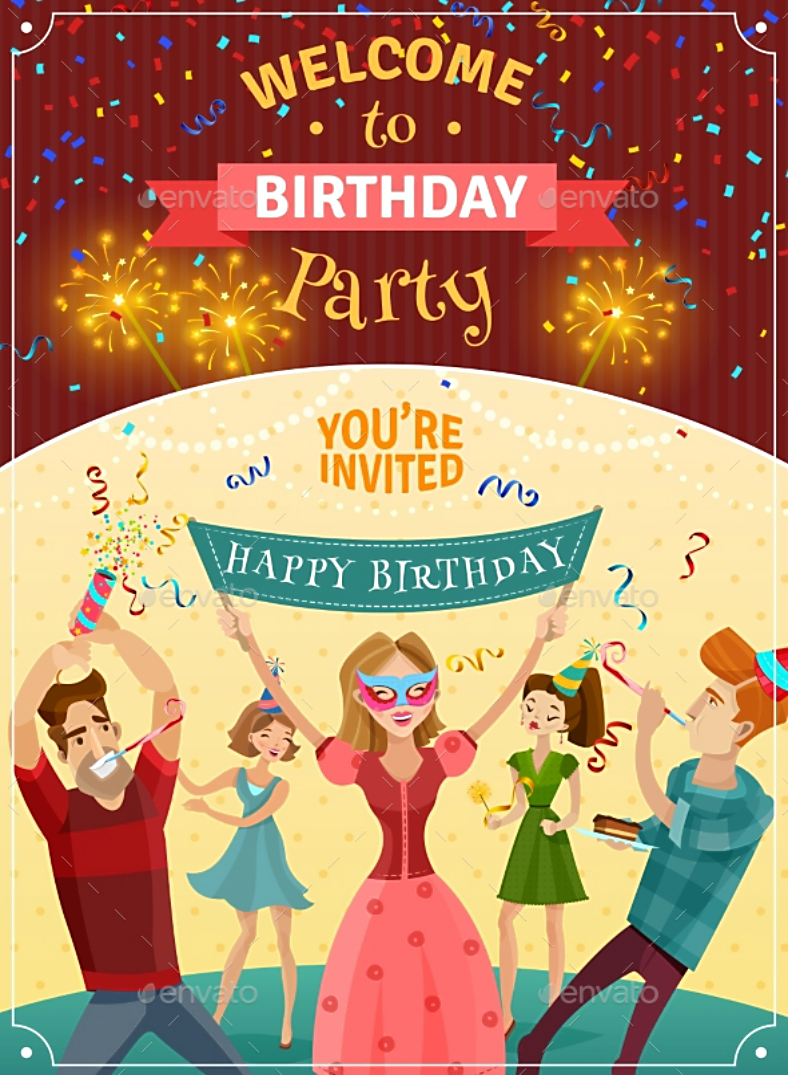 Have your birthday (or someone else’s) announced in a rather exciting and cartoonish way with the birthday party announcement poster above. For sure, from the way this birthday card template is being designed, it will hardly go unnoticed even at a distance. As you can see from the design above, the top-most portion shows a red curtain where some texts are written. Right below that is character illustrations of people enjoying the birthday party with the placed right in the middle holding a banner that indicates the birthday greeting. Lastly, if you look closely at the design, there are confetti elements scattered all over it, thus the title of this template.

Those four-legged creatures that we call dogs? They’re not just pets, they are family, and we all know how we treat our family, especially the newest additions. We don’t just adopt a dog just because we want to, we adopt them because we need them in our lives just as much as they need someone to love them. Which is why when we adopt a dog, we will need to welcome them through a celebration, the same way that we do when someone in our family gives birth to their baby. If you have just adopted a new dog and want to introduce the newest addition of your family to your relatives and closest friends, then do it by throwing a party, and we may just have what you need to make the announcement. You may also see PSD wedding announcement templates. 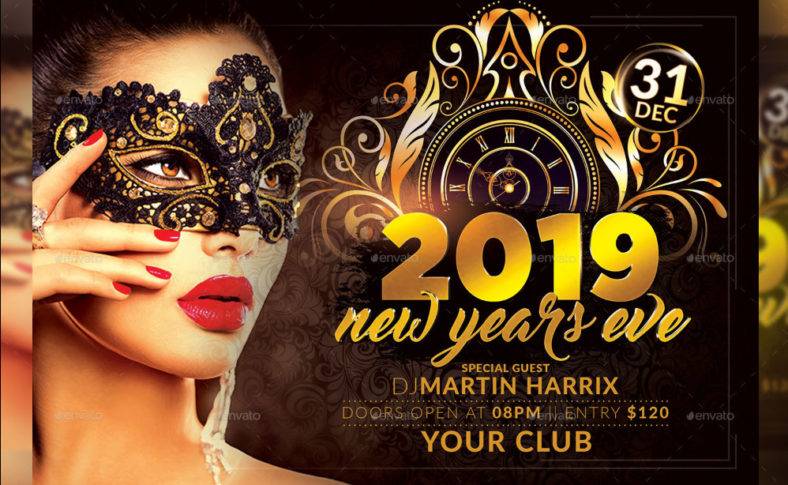 Dinner parties are something that can be held for all sorts of events, from casual to formal ones, and it is up to you if you would want it held at the convenience of your own home or someplace else. Whatever the reason and however you want your dinner party to be celebrated, you may want to use our party announcement template above, which uses an inverted color scheme. What that means is that the entire background of the design is in black, and the elements added to it are merely white silhouettes—or you may even describe the elements as being illustrated using the background’s negative space. All in all, this template is very simplistic, and people might find it appealing because of its minimalism and its easiness on the eyes.

Once again, an announcement banner template for your social media needs, but unlike the previous one, the template above is intended to announce Valentine’s day party. Yeah, we’re well aware that Valentine’s day has already passed and the next one is still nearly a year away. But who knows? You may want to keep a design template handy just in case you decide on making your next Valentine’s day more memorable by throwing a party. The design of the template above is a bit grungy because of its texture but still manages to make itself attractive and romantic with its use of cute colors and illustrations. 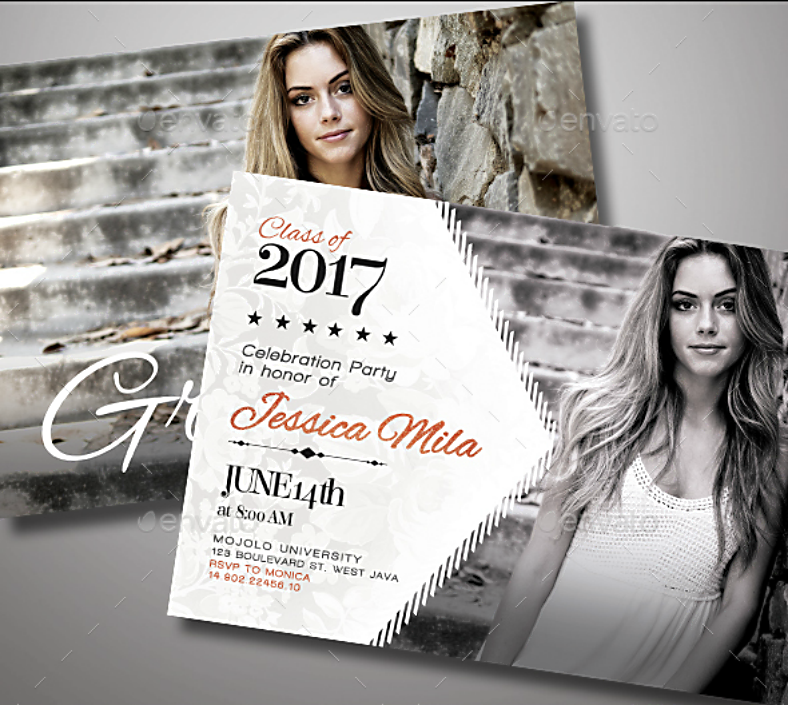 Above is another one of those templates intended for making announcements for a graduation party. As you can see from the design above, this template is a no-brainer, and anybody who sees it can definitely determine what this party will be all about. This announcement template utilizes both front and back sides of the card, with both of them basically containing the same image of the graduate, although one side is in gray-scale and has the details of the party listed inside a semi-opaque text box. If you’re planning to throw a graduation party, then make the most out of it by using this graduation announcement card template.

Planning to go on a trip to Disneyland? Well then, make it even more special to children by making an announcement card that is supposedly written by Minnie Mouse herself. Just think of how they would react when they receive the card and read the message with “Minnie” inviting them to come visit here at Disneyland? If that is the idea that’s going through your head, then we may just have an announcement letter template made specifically for that purpose. Check out the template above, simply download it and put the name of the child whom you will be giving this card to. And once they get their hands on this card, see their faces glow before your eyes. 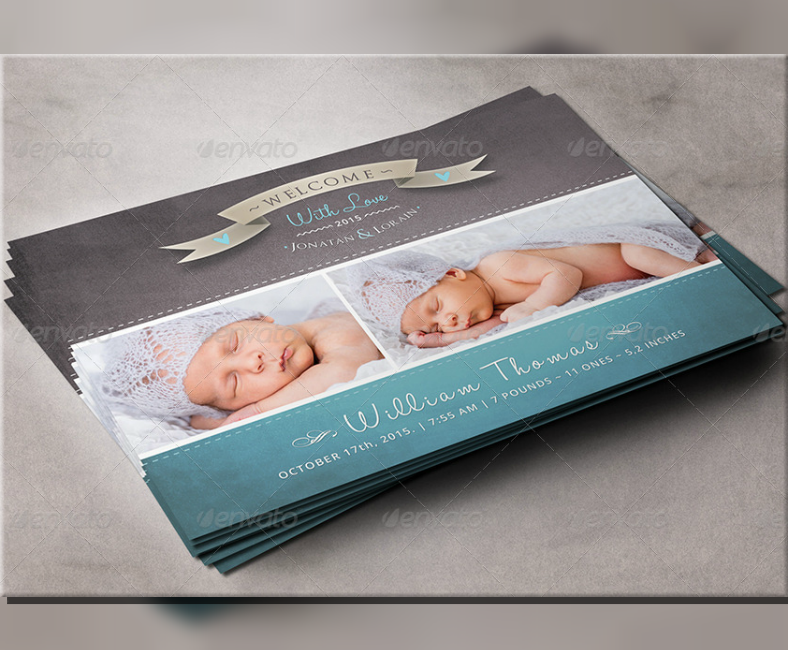 As mentioned earlier, it’s always special when there’s a new addition to your family (even when that new addition is a four-legged fur ball). But when it comes to babies, many would throw a party even before the baby is born, and this celebration is called a baby shower. And then another celebration will be held after the baby is born to officially welcome them to the family. We have a collection of baby shower templates here that you can check out. However, if you are looking for something that you can use for after the baby is born, then we have a baby birth announcement card template above that you can download and use. 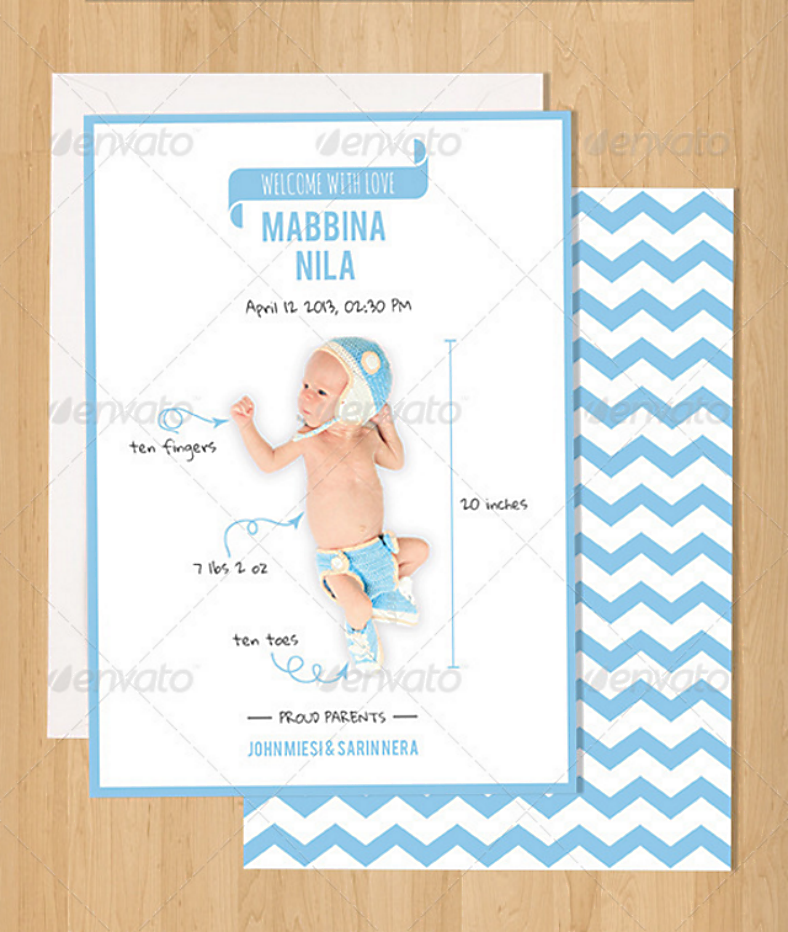 Speaking of baby birth announcement cards, here is another one that you may also be interested in. For this template, the front side simply shows an image of the baby with some added information regarding the baby’s birth weight and length, while also hilariously including the number of digits per hand and feet, and the names of the very proud parents. This announcement card speaks for itself and doesn’t need further explanation as to what the sender wishes to convey to the reader. 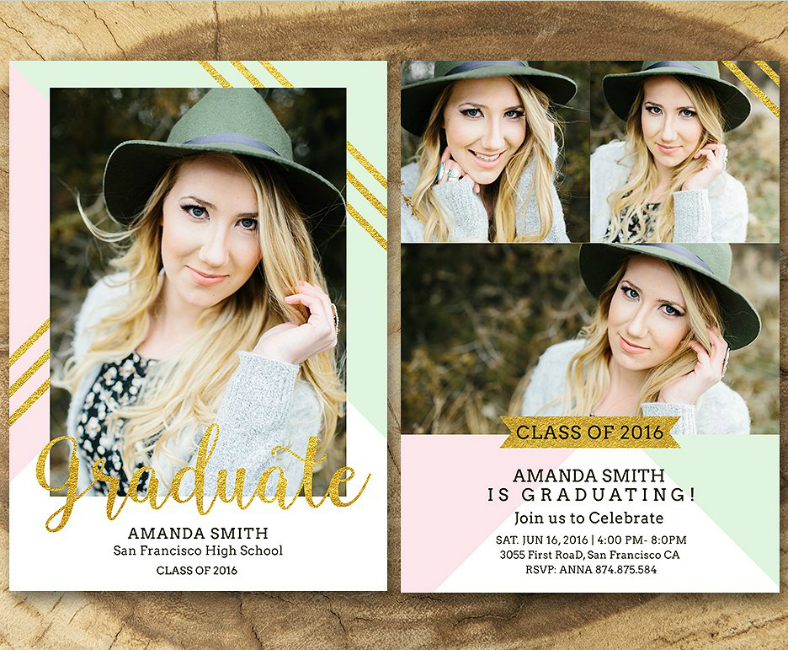 If you are still looking for a graduation party announcement template, the one above is the last template in this article, and we are hoping that you are able to find at least one template that works for you to make the most in letting people know regarding the party. Same as the previous ones, this template features two beautifully-crafted sides which feature images of the graduate, with the back side containing a collage of portraits along with the details regarding the party. You may also see funeral announcement templates. 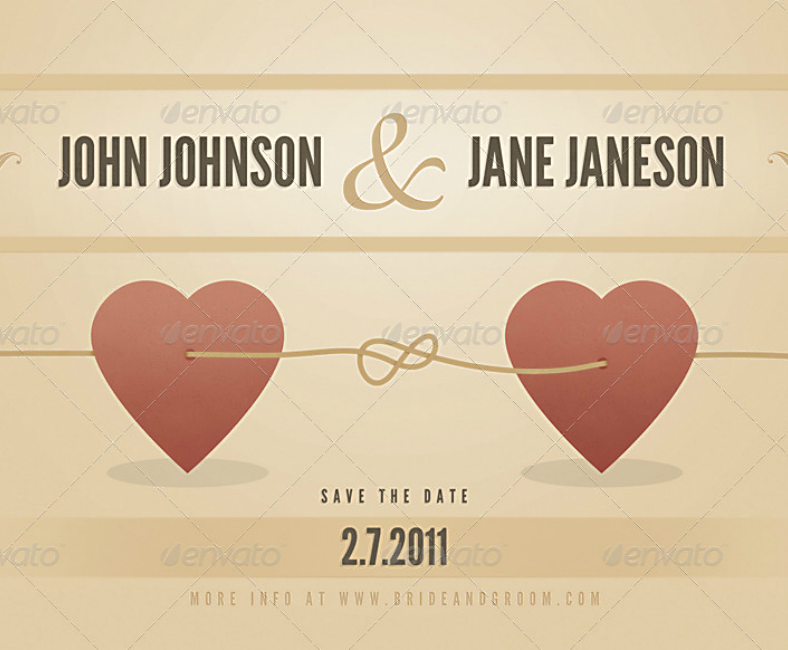 The wedding announcement template above takes the phrase “tying the knot” to a literal level. As you can see from the design above, this vintage wedding template features flat illustrations of a pair of heart symbols, with a thread running through both of them and tied to a knot in the middle. In addition, this template makes use of a warm filter to make it appear vintage-like, which enhances the quality of the template. 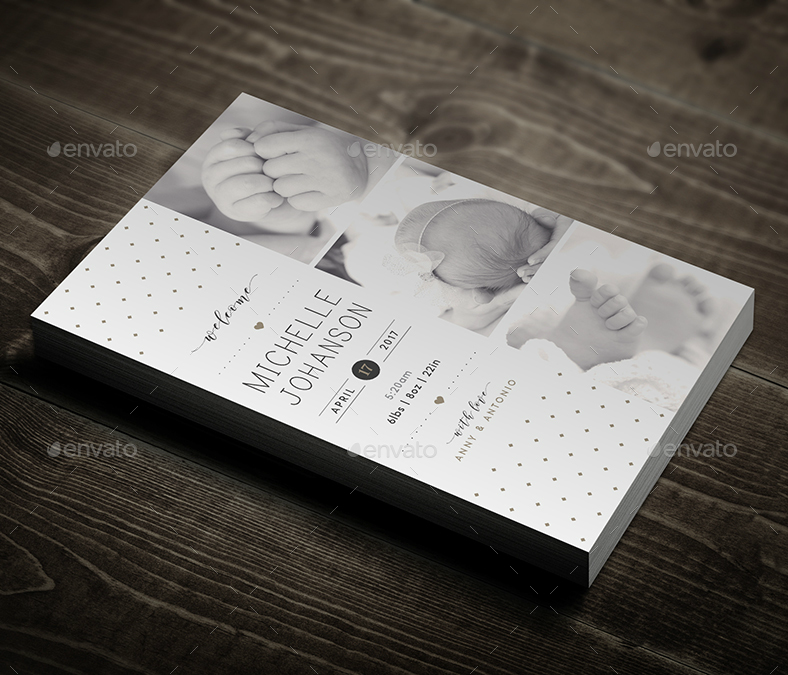 And then, the last announcement template on this list is again intended for baby birth celebrations. For this baby announcement template, you may notice that the image appears to be a little more dramatic than the previous baby birth announcement card that we have shown you that was somewhat humorous. The secret to pulling off a dramatic look in the most effortless way possible is by using a monochrome filter on the image, as seen in the design above. 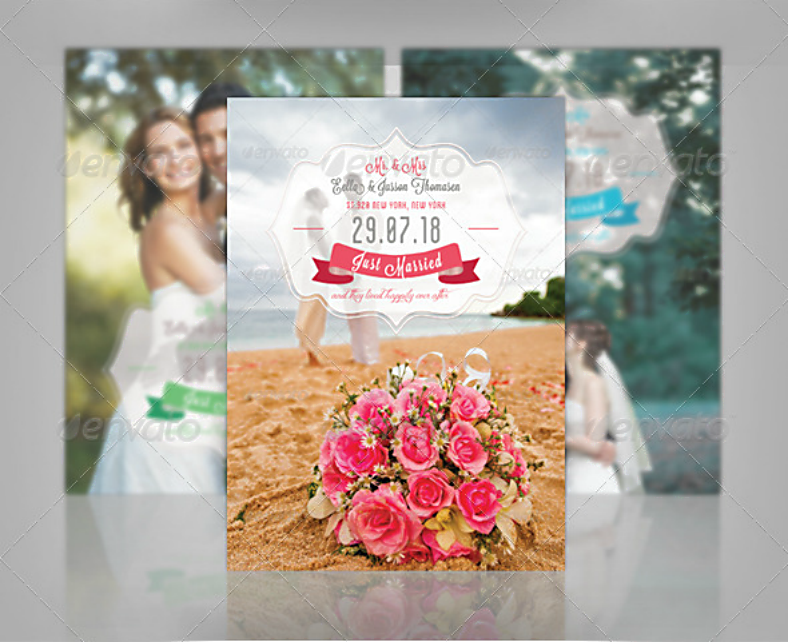 Speaking of events that happen only once in most people, weddings are one of them—considering that nothing bad happens to the marriage. Because of this, it is totally normal if the to-be-wedded couple would want their wedding ceremony and reception to be as extravagant as it can be unless they choose to make it simple. When it comes to the wedding announcement cards, why would you want to hold back? Regardless if you want your wedding to be fancy or simple, the announcement template above may be a good pick for you since it shows both minimalism and elegance in one picture. 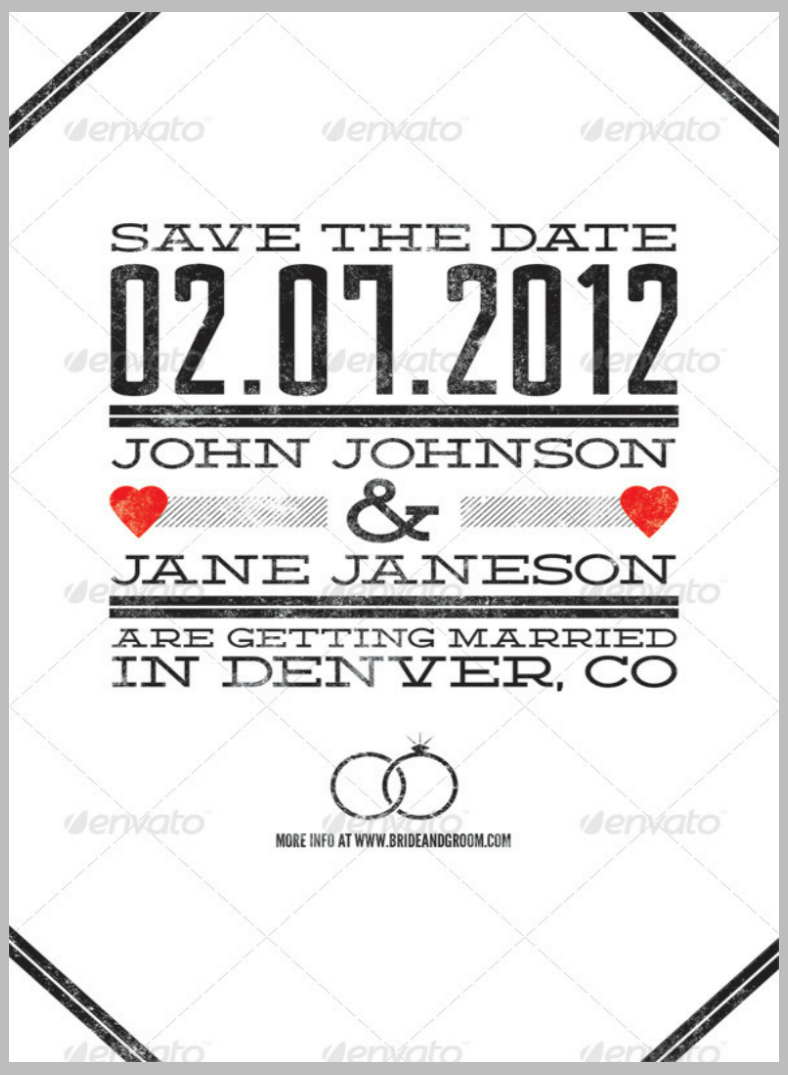 On the other hand, if you are one of those people who really embraces minimalism and simplicity, then check out the wedding announcement template above which is highly straightforward, typographic, as well as grungy.

If you check out the design above, you will notice that almost the entire template is typographic except for the illustration of a pair of red heart symbols, the wedding rings at the bottom half of the design and the diagonal lines around the corners. And to further make the template appear simple and clean—as well as to make the elements stand out—a solid white color is used for the background. Same as the previous announcement template, this one is highly versatile and can be used regardless of the wedding event’s simplicity.

So were you able to find an announcement template that works for the party that you are planning? If so, then don’t hesitate to download it. Trust me, you will not regret it. Why? Because all of these templates have been designed professionally by some of today’s best graphic artists from all over the world. But there’s more to these templates than just being visually-appealing. You may also see moving announcement designs.

These templates are also fully editable, and as long as you have the right editing tool for them, you may be able to edit them efficiently while keeping the quality at its finest. And lastly, these templates have been priced very reasonably, which means there is absolutely no reason that you won’t be able to afford them. Now that we’ve got that covered, it’s time for you to download a template so you can start working on your party announcement. You may also see graduation announcement invitations.