At some point in our careers, we get promoted to a higher position or remain where we are. Promotions are given to deserving employees who have worked hard and gave an example of excellence to others over a period of time. It is one way of boosting the employees’ dedication and enhance their desire to work harder. You may also see announcement letters. 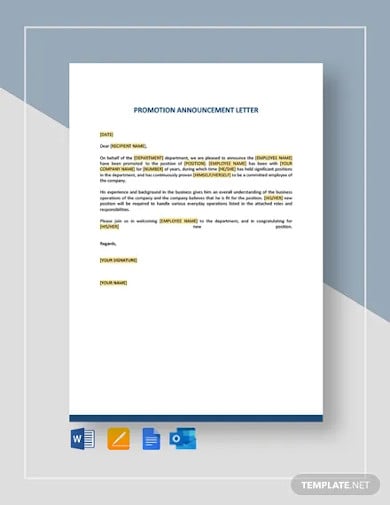 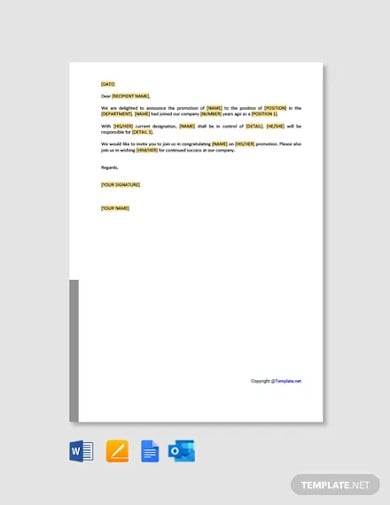 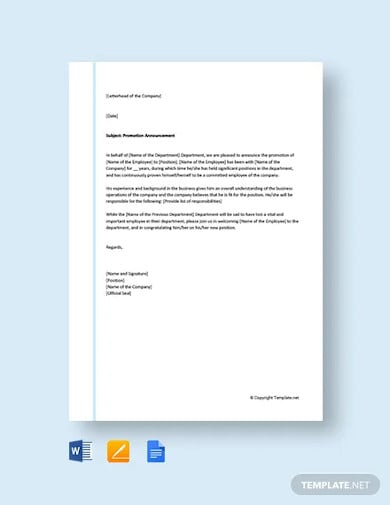 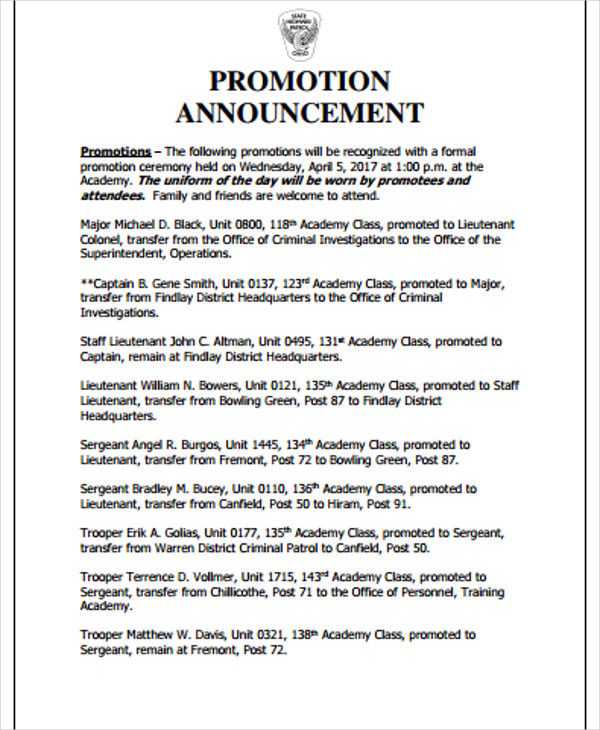 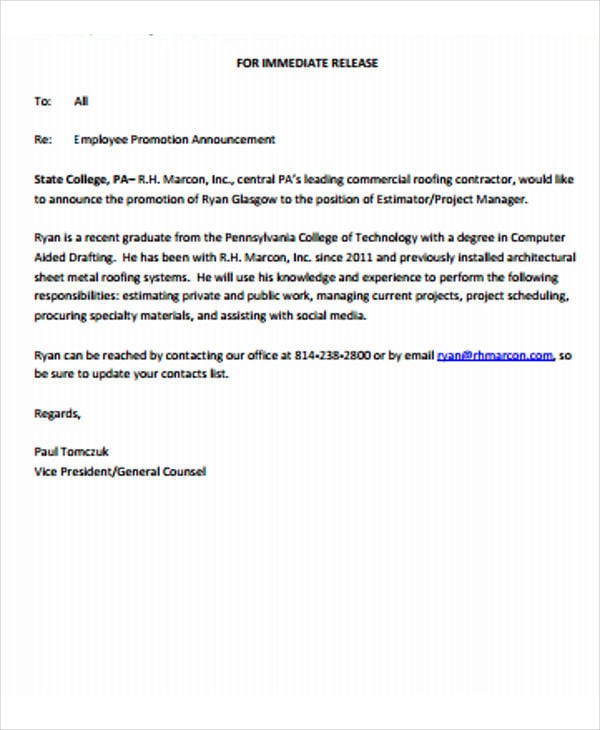 Promotion announcements have to be made for the other employees to be aware of their new superiors. Each department has to coordinate with each other in announcing the promotions, as it is sometimes announced as one. The promotions of employees don’t happen at the same date. You may also see sample wedding announcement templates.

Another reason why promotion announcements are made is for the employees to know formally about the promotion and extend their congratulations. There has to be some kind of formality in news like this, as it is often rude and informal to just hear it from one employee to another. Employers need to shed light to the other employees on why this certain person deserved the promotion. You may also see printable birth announcement templates.

Announcing promotions can also open new opportunities for people in the rank and file level to work harder. This gives them an aim to be promoted sooner or later. Promotion announcements also become a starting point for change within the company. Some changes in how the team works is also tackled, especially when one gets promoted to a higher position. Adjustments have to be made and everyone must comply with it. You may also see wedding announcement templates.

As in every aspect of work inside the office, promotion announcements are put into formal writing for the purpose of formality. It is written after an employee accepts the promotion and it needs to be announced via email and a small meeting. Writing one is a challenge for brevity and formality. You may also see birth announcement cards.

First of all, you need to write the important information such as his name, his old and new position, and when he is going to do the job as a promoted employee. These are the first few things every employee must know when a promotion is announced. Come up with a coherent explanation as to why an employee was promoted and the decision behind it. To make it look more credible, including the employee’s track record and his accomplishments. A questionable promotion is in danger of harsh criticism. You may also see pregnancy announcement cards.

Second, you need to explain the old and new roles of the newly promoted employee in the company. This will give the employees an idea of their new job. With promotion announcements come the new changes in the office. You also need to tell them to adapt to any change that will take place anytime soon. You may also see death announcement templates.

Lastly, conclude it by encouraging everyone to congratulate the newly promoted employee. These people who just ascended the company ladder needs all the encouragement and well wishes they can get. You may also see party announcement designs. 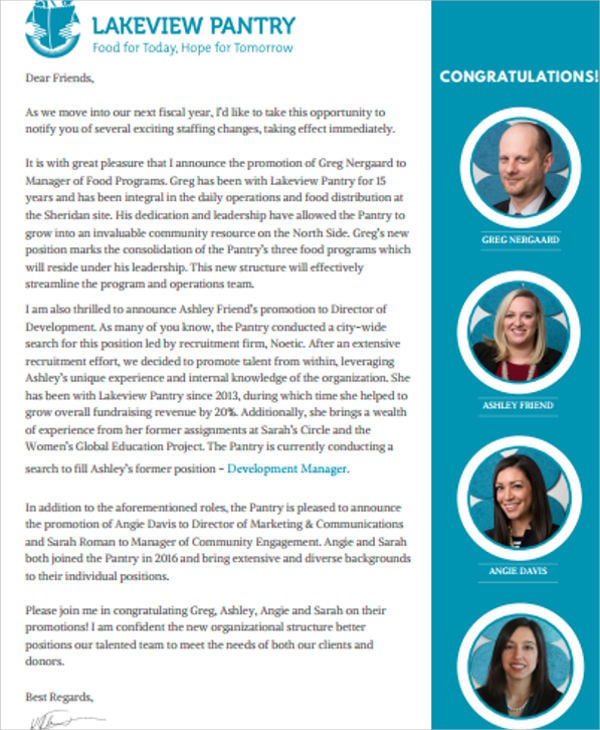 Factors To Getting A Promotion

The corporate ladder is a heavily structured map where people are in positions and holding various degree of power in the company. In getting a promotion, you must work hard from where you are and step up your game. Promotion is the next level from your current position, and there are several factors that can help it. You may also see PSD wedding announcement templates.

An employee gets promoted to a higher position if he has worked for the company for a long period of time. One of the factors of not leaving a company is reasonable to pay. The employer has earned the loyalty of the employee and can be one of the factors for promotion. Despite the countless changes and challenges the company had to face, the employee remains resilient and positive. Loyalty is a guaranteeing factor to promote an employee who’s been with an employer through and through. You may also see moving announcement templates.

Another factor for promotion is dependability. When an employee can work on his own without any supervision, he is considered dependable by the employer. He can make decisions on his own, on what’s best for the situation, without asking for approval since it is the right thing anyway. Dependability is a quality all employees must learn to possess since their superiors are not there to guide them all the time. You may also see wedding announcement card templates.

3. Excellence in doing the tasks.

An employer considers an employee for promotion when he does the task in an excellent manner and delivered in its best quality. The employee always strives for excellence and does not give a subpar quality of what the finished outcome will look like. A keen eye for details and a logical way of carrying out the tasks are what makes an employee able to do the task well.

A good track record of an employee is a major factor for promotion. Track record covers the employee’s accomplishments in the company as well as his experiences in his previous jobs and in school. Track records help the employers decide if the employee is worthy to be promoted to a higher position. His skills are considered a big factor along with his track record. You may also see announcement flyers.

The above-mentioned qualities are important factors for promotion. Along with these, good work ethics is also a crucial factor. When an employee exhibits good work ethics such as coming to work on time, being considerate of other people, meeting deadlines, and other good deeds, he is on his way to getting promoted. Your skills, competency, and loyalty the company will never matter if you don’t have good work ethics. You may also see event announcement designs.

Work can take so much toll on a person’s emotional quotient. He should control his emotions and set aside personal matters while at work. Emotional stability is an important reason why people get promoted. They are able to keep their emotions under control while dealing with work matters. They don’t easily get swayed and know the difference between acting on what they know and how they feel. You may also see graduation announcement templates.

A company’s promotion scheme gives it a few advantages on their part. Instead of hiring new people, motivating the employees to work harder with the assurance of a better position retains them from hiring new people. Some of the promotion’s best advantages are the following:

One sure fire benefit of promoting employees is reducing the costs and expenses the company might end up doing when they hire new people. They don’t have to think of allotting a portion of the budget to the salary of the new hires. They can just add it up to the salary of the newly promoted people. In this way, there will be extra money left for other expenses. These can cover more important needs than the salary for the new people. You may also see engagement announcement templates.

Promotion really helps in selecting the right people for the position. There has to be a rigid screening of the candidates up for promotion. It’s the call of the human resources team on who to promote. Given the track record and the work ethics of the employees, they have a clear idea and a set of standards on who gets the coveted position.

When an employee is promoted, it motivates other employees to work harder. They have high hopes in reaching the same position as the ones who were earlier promoted. Motivation is an important thing for every employee in order to deliver the best quality of work at all times. It also makes the workplace healthier as each employee is motivated to bring out the best of what they can do. You may also see a new business announcement.

4. Prevents resistance from others.

Hiring a new leader who needs to be trained on the work processes take so much time and resistance from the old employees who know better. There will surely be a rift between the new employee and the older ones, with the clashing of ideas and exchange of words. It takes time adjusting to the traits of the new hire. If employers promote someone within the company, these things can be minimally avoided. The newly promoted employee is already known to the people and has adjusted to how his brain works. You may also see anniversary announcement templates.

The promotion within the company enhances its image. It gives the people from the outside world an idea of how the company values its people. The loyal employees will recommend working in his workplace to the people he knows. The company gets the boost it needs through advertisement and word of mouth. You may also see gender reveal announcement templates.

Promoting people within the company is a training ground for making new leaders. The company sees potential in the people they hired. The best leaders are those with experience and those who can handle people well. You may also see death announcement cards.

Gunning for promotion entails a thousand things. You really have to have the right attitude and skills to deal with other people and the tasks you need to do. But first, you have to know your role in the company. Familiarize the tasks that you are assigned to do. Always think you can do better every single day. Think of ways on how to level up from the usual way of doing things. You can get pretty creative and push yourself to do more. This allows you to demonstrate the skills you have and show some other skills that you are capable of. You may also see engagement announcement cards.

Promotion is a boost for the pocket, the record, and your image as well. When you get promoted, do your job better and be more compassionate to those below you. You may also see free graduation announcement invitation templates.