“It is 2018!” – A remark commonly said by people who want to imply change, progressiveness, and even uniqueness. It is some sort of excuse to get away with almost anything absurd. People now are more open to the idea of same-sex union, even the younger ones being open about their political views. It is indeed 2018 and nothing odd is greatly irrelevant in this ever-changing, not to mention more accepting, times. You may also see Creative Wedding Invitation Cards.

Same goes for a wedding, people come up each time with more and more outrageous idea for their special day. Some brides simply deviate from the common white beautiful dress and opt for colors that are irreverent and non-conforming such as black, navy blue, and so on. Others focus their uniqueness and outrageousness in the details that make up their wedding, like for example, a more modern and digitalized invite with a video snippet of both the groom and bride to be. There are also some that go far extents such as putting a butterfly in the invitation for that extra, extra special effect. However, you can still be outrageous and unique without having to spend a lot with just your invitation card, you can simply have a different perspective and use that to make your wedding different from others. That said, here is a list of elegant wedding invitation card templates inspired by the application WhatsApp. Anything is indeed possible in 2018. 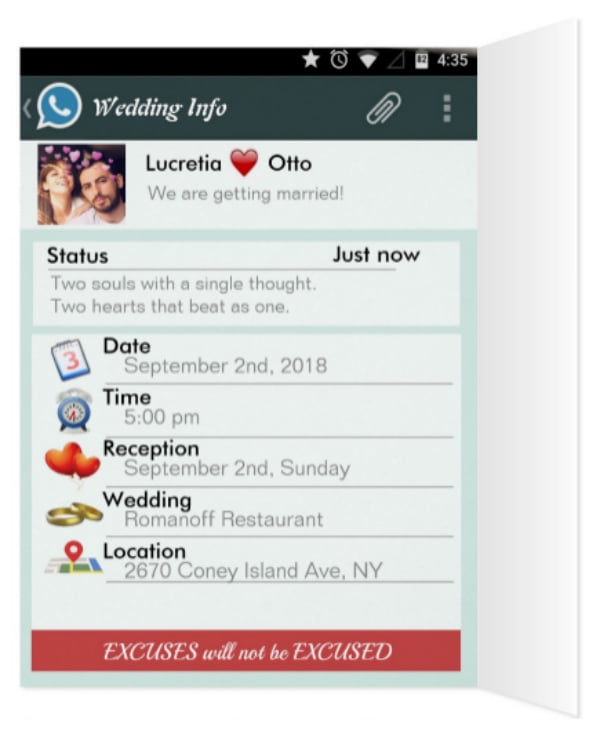 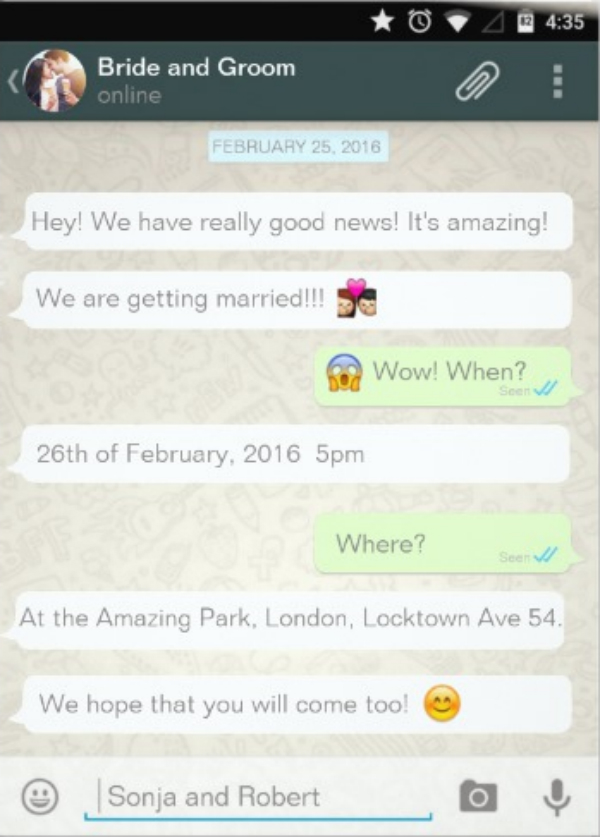 Founded by two former employees of Yahoo!, Brian Acton and Jan Koum, WhatsApp grew from a simple vision to being a billion-dollar app. It all started when both Acton and Koum left their jobs as engineers at Yahoo! in order to give themselves a break and they did by traveling to South America. They even applied for jobs at Facebook at some point and got rejected. You may also see Romantic Wedding Invitation Designs

But, WhatsApp really began when Koum saw the potential of the app industry after purchasing himself an iPhone. There he thought what could possibly be done and realized everything was impossible without a developer. Koum acquired the help of his friend whom he frequently visited, Alex Fishman, who found a Russian developer, Igor Solomennikov, who he then introduced to Koum. Solomennikov then started to develop the app which Koum later named as WhatsApp to sound like the common way of the slang greeting “what’s up?”.

Then on the 24th of February in 2004, Koum incorporated WhtsApp Inc. In California, but got heavily discouraged and had plans on laying the plan samples down and look for other jobs as the earlier versions of the app kept crashing. It was Acton who encouraged him to wait a few more months.

At the time when Apple released pushed notifications, which pings users even when they are not using an app, Koum saw the opportunity to change WhatsApp into a much better version. An app that notifies everyone in the network whenever one changes their status. With those changes, Whatsapp 2.0 was released, now with a message component. This feature alone made a great shift in their number of active users which suddenly increased to 250,000. At that time, Acton was managing a different startup, with which he left to officially join WhatsApp on November 1. But, prior to that, in October, he coaxed five employees of Yahoo! To invest $250,000 in seed funding. Later on, Acton became a co-founder of the application. Then in 2011, WhatsApp became one of the Top 20 Apps of Apple in the US and by 2013 they had about 400 million active users, far from their very first 250,000. You may also check out Floral Wedding Invitation Designs.

On 2014, with the incrementing popularity of the app and after separate investments of $8 million and $50 million by Jim Goetz, WhatsApp was valued at $1.5 billion. But it was then later on acquired by Facebook at a whopping value of $16 billion. And the very intent and idea of the acquisition were to provide internet services that were free of charge. And in February 2016, it was recorded that the application samples had a billion active users. 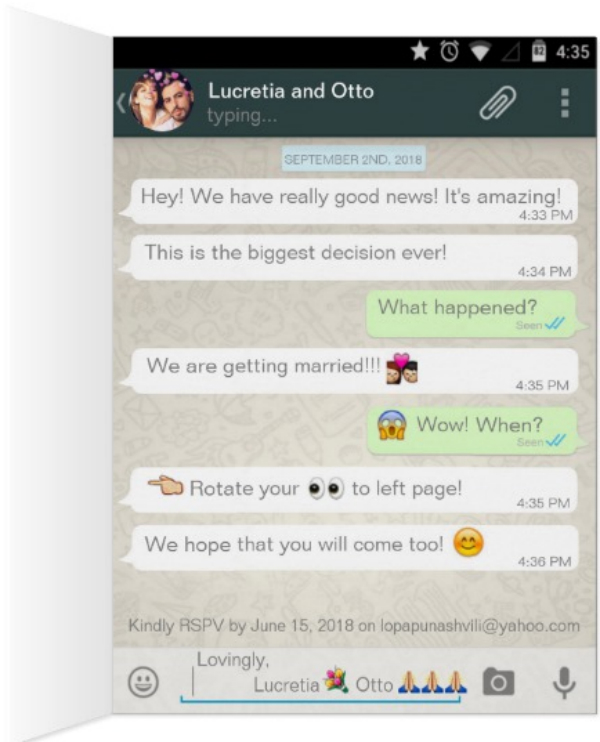 Given the popularity of the app, it will not be a surprise when you opt for something as modern and unique as a WhatsApp-inspired invitation card. It will mostly ring to every guest given that everyone now lives in a more technology and social-media-centered life. That said, although a deviation from the usual white, fairytale-like invitation cards, that seems to have come out straight from a princess’ storybook, a WhatsApp invitation card is also as enticing.

It is definitely a more modern approach in terms of invitation card ideas. Given that it is based off an application, the word app will simply precede the card itself, thus guests giving the impression that it is modern.

But even with its irreverence, all these WhatsApp-inspired invitation cards are still proper and fitting for a wedding. Think of it simply as a more fun approach to inviting or informing your guests about the event.

Importance of an Invitation Card

Wedding invitation cards hold great importance that most people fail to recognize. All of these, together make up the reason why having a more palpable medium for inviting should continue to be patronized despite the continued growth and power of technology and social media.

One of the assets that make beautiful invitation cards important is how you get to keep it for keepsakes. In moments where reminiscing is called for, you can simply look at the invitation card and all the beautiful memories it entails.

It is undeniable how accessible everyone is with technology and social media. One can just simply make a call or send a text and is already able to inform the guests about the wedding or if not, make a digital card and sent it to everyone via email. However, with an actual invitation card, it is a more formal gesture compared to just simply resorting to the accessibility of today’s gadgets.

Since an invitation card is what usually is given out weeks before the event, it has the tendency to excite guests about the coming event. Invitation cards serve as a prelude to your wedding, it gives guests a hint of what to expect of the affair. You may also see Anniversary Invitation Cards.

Invitation cards can create a well-thought out and well-planned impression in your guests. Given the unique concept of your invitation card, it will most certainly generate positive feedback report from everyone who gets to receive one.

Although there are tons of ways one can acquire their very own wedding invitation card, choosing to simply buy one that is premade and readily available online is simply the best, if not better, option out there. And there are definitely reasons that prove why the pre-made option is the option to go for. You may also check out here Anniversary Invitation Cards.

The very reason why the pre-made option is very appealing to most is that of its affordability. Premade wedding party invitation card designs and templates are generally affordable because it is made according to the graphic designer’s preference. They are not obligated to follow any demands or guidelines unlike with going for the custom-made option which determines the price of the product. Also, premade options are affordable but are of the best quality design.

Premade wedding invitation card designs and templates are also very easy to work with. Considering that they are all premade, with initial designs already laid out, you can just simply use that as a guide when you start to work on your wedding invitation card or use it as inspiration to base off of. Also, you do not need to have extensive knowledge about design or different design software, as basic knowledge can already help to fully materialize your invitation card.

These premade wedding invitation card designs and templates are all fully editable and customizable. You are given ample liberty to do whatever you want with it from texts, fonts, colors, sizes, and a few other elements in the design. Sometimes it comes with smart object layers or vector files that enable you to move around an element, creating a more unique-looking and more personalized and traditional wedding invitation.

There are countless design options that come with the premade option and as for a WhatsApp-inspired invitation card, there is also an array you can choose from. There are simple designs, minimal designs, modern designs, fun designs, and even floral designs. There is definitely one for every different preference, perfect for any themes for a wedding.

If you find this article helpful in any way, do not forget to bookmark this page for future references. Kindly share this with other individuals or couples looking for unique invitation cards to use on their wedding day. You may also see Photo Wedding Invitations.