Back in the days, chalkboards were the most commonly used medium for writing in a large format and intended for a big audience. These were being used in schools as an instructing tool for teachers, and in food establishments as a tool for listing down the food and drinks that are being served for that day. Also, the great thing about chalkboards that further boosted its popularity is the fact that they are relatively easy to make, and chalk sticks can be bought anywhere for a very cheap price. You can also read vintage ticket designs.

Since chalkboards are very rarely being used nowadays because people have opted to use whiteboards instead, we have a collection of templates below that are quite nostalgic for those who have come across chalkboards. These templates come in the form of tickets, and can actually be used for any event that you can think of. The great thing about these ticket templates is that they can be downloaded and edited very easily. So if you’re interested or just curious, feel free to scroll down to see the templates yourself. 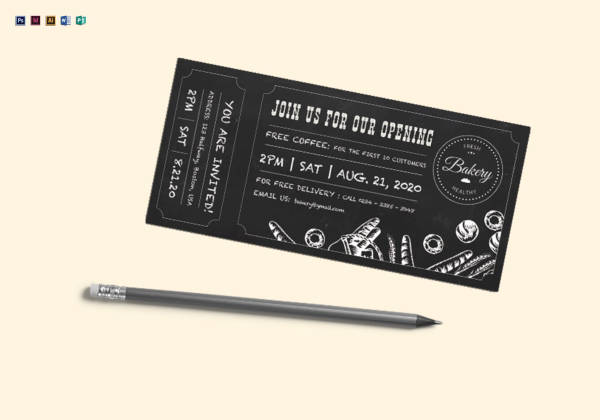 In the food industry, chalkboards are commonly used as food menus and are usually seen outside the establishment to give passersby a clue as to what dishes and drinks are being served. Among the various types of food menus, this one is called the Du Jour Menu which translates to “of the day” menu. The reason why chalkboards menu are used for this type of menu because it allows for easy changing of content as well as being highly visible even at a distance.

The reason why we talked about food menus is that the creative ticket design above bears a design that is intended for opening celebrations of food establishments. If you are planning to open your very own restaurant, fast food joint, or any food place, then the ticket template above would probably be a good choice.

Yes, we know what you’re thinking, “What’s a Christmas ticket template doing here at a time like this?” We are well aware that it is still a couple of months before Christmas, but if you’re planning to throw a party sometime during the Christmas season, it doesn’t necessarily mean that you need to wait until the season comes to prepare your party tools. You can also like dinner ticket templates.

The great thing about having these resources available on the internet is that it allows you to use them before you actually need them. For this template right here, you can get them right now and it will only cost you $7.00. If this Christmas-themed chalkboard ticket template seems to work perfectly for you, then don’t hesitate to download it right now, you might not get another chance in the future. You can also read exit ticket templates. 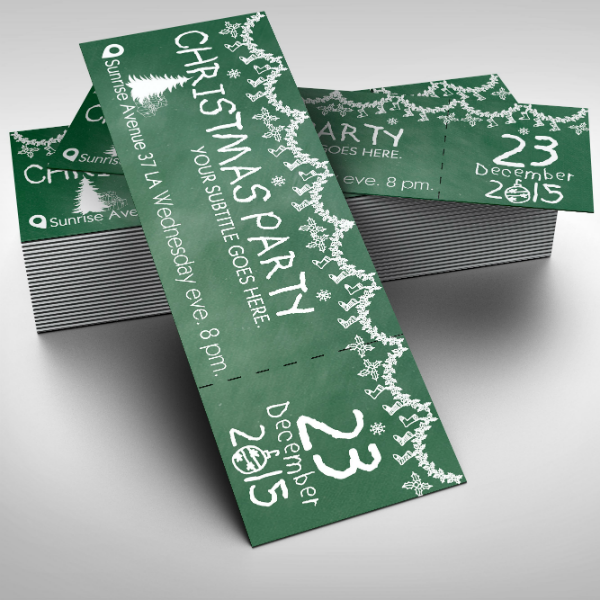 By the 20th century, the new generation of blackboards were painted with porcelain paint that gave it a greenish hue. This new version of chalkboard caught on very quickly among instructors because it was more comfortable to stare at long periods of time as opposed to the previous black ones, but the name was kept as is because greenboards did not sound catchy enough. You may also see event ticket templates.

Now that you know the brief history of chalkboards, you might want to consider using the creative template above for making your own event tickets.

The History of Chalkboards

While there isn’t a definite date as to when chalkboards (or blackboards) were first used, there has been a mention of black tablets being used in India by school-aged children as a form of writing medium, and the tool they used for writing was a white-colored material. This was found in Alberuni’s Indica which was written sometime during the early 11th century. You may also see banquet ticket templates.

Around the 16th century, blackboards were being used in Europe for both music composition and education, but it was only called blackboard ticket design during the mid-18th century (“to write with a chalk on a black-colored board” circa 1973). In 1801, the first time the chalk stick was used as a writing tool for the blackboard was recorded in the United States in a mathematics lecture. And in 1814, colored chalk came into existence after it was invented by mixing together ground chalk, porridge, and coloring dyes.

Though very little number of schools nowadays still use chalkboards over whiteboards, but this is still a good and quite cliched way of turning over a new leaf. Every single text in this elegant ticket template is editable, you can even use Adobe Reader to edit the text—that is, if you have the paid version of the software that allows you to edit PDF files. For as low as $7.50, you’ll be getting two high-quality PDF files that are fully and easily editable. 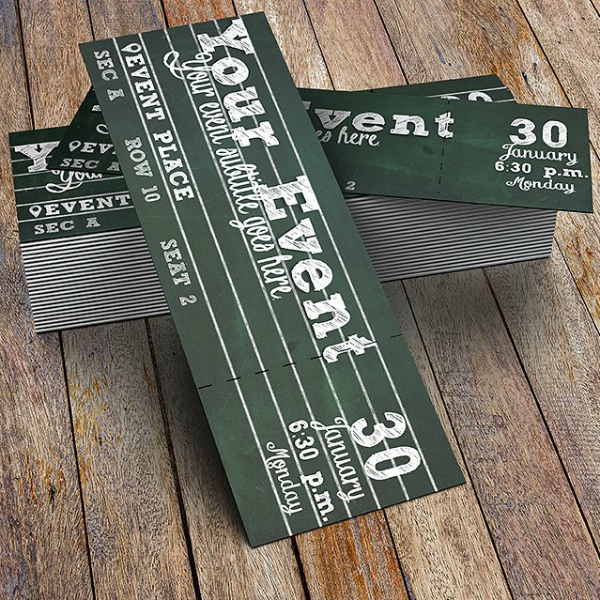 Here’s a multipurpose ticket template in PSD that actually looks like a genuine chalkboard because of the uneven colors on the background and the texture of the font. Measuring at 7 by 2 inches, this template will give you enough room to include all the necessary information regarding your event. Not only is the text editable for this template, you are also give various options for the background from the two color schemes (black or green) down to the addition of horizontal lines.

Planning to throw a stag party for a friend? Well, we have the resources you need to help you make ticket-styled invitation cards. If you aren’t familiar with what a stag party is, it is actually another term for bachelor party, which is a party held for a man who is about to get married. For this template, the entire surface appears rustic and worn out, actually making it look like a chalkboard. If this template impressed you with its creativity, then go ahead and download it.

Other Uses of the Chalkboard

Previously, we have shown you a ticket template for a stag party. This time around, we have a couple of stag and doe party ticket templates that you can check out. Commonly, we see bachelor parties and bridal showers held separately, but oftentimes, a joint party is held and is usually intended as a fundraising event for the engaged couple, and this event is called a stag and doe party. Though this type of celebration is very common in Canada, it has also been celebrated occasionally in the United States.

Since this event is intended to raise funds for the future of the couple, there has to be something used in order to come up with those funds. This is where tickets come in, and guests who are planning to attend the party will need to buy entrance tickets. Shown above is a template that you can easily download and use for making your own tickets, and just like the rest of the printable ticket templates that you have just seen in this article, this one also uses a chalkboard theme.