If you are neither the expectant mother nor the were you asked by one to throw them a baby shower, then you may be allowed to plan one. Take note that these so-called rules are based on the traditional etiquette of baby shower celebrations, but may most likely vary according to the culture. Nevertheless, if you are planning a party, then you will definitely need to send out event invitations to the people that you want to come.

Making invitations are actually not that difficult, you may even be able to make one from scratch if you just commit to it. Then again, not everyone has that much time on their hands, most people have other things to worry about every day, and this is why templates are relevant. Pre-designed templates can save you a lot of time and effort since they are already halfway finished, and you simply need to download them. That said, you’ll be able to find a collection of baby shower invitation templates below that are ready for download. 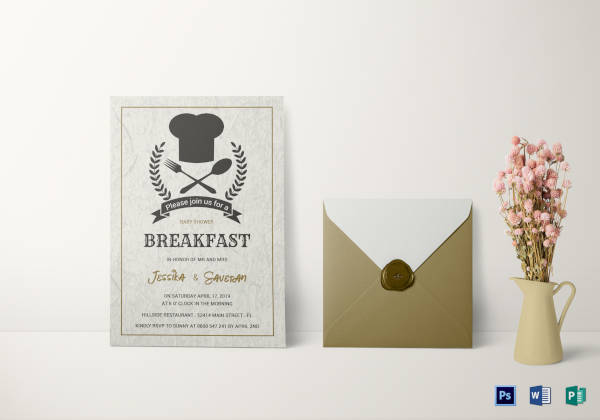 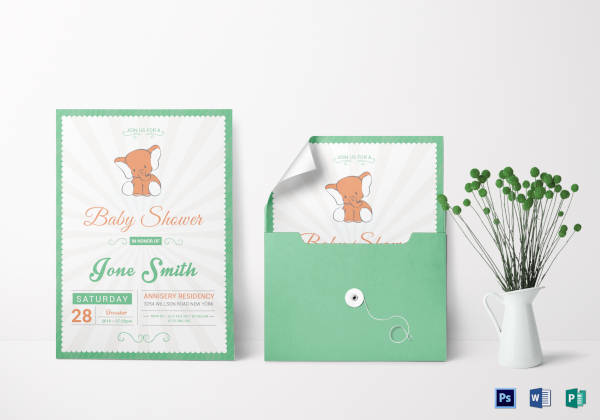 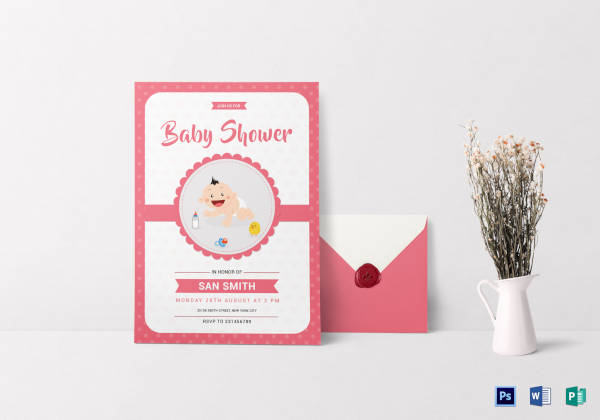 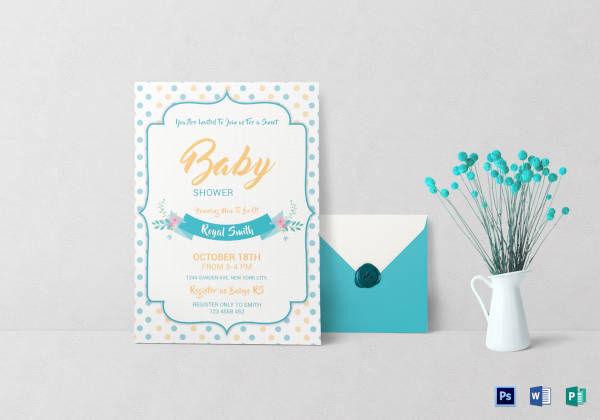 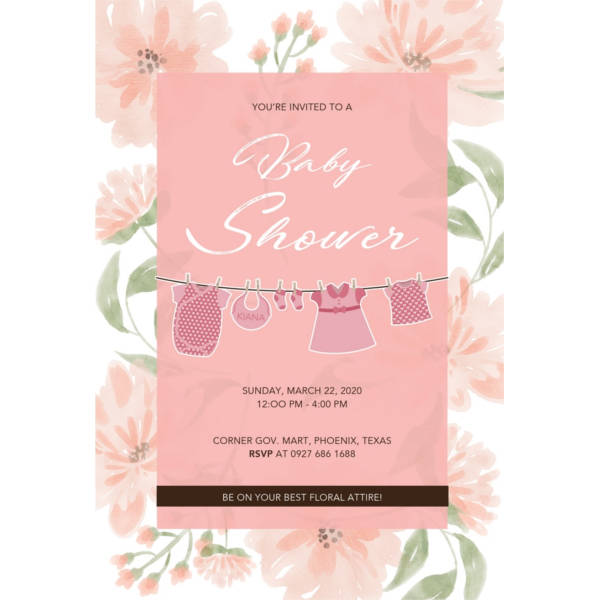 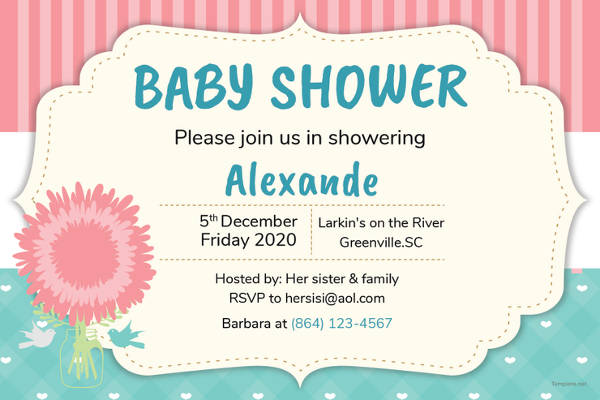 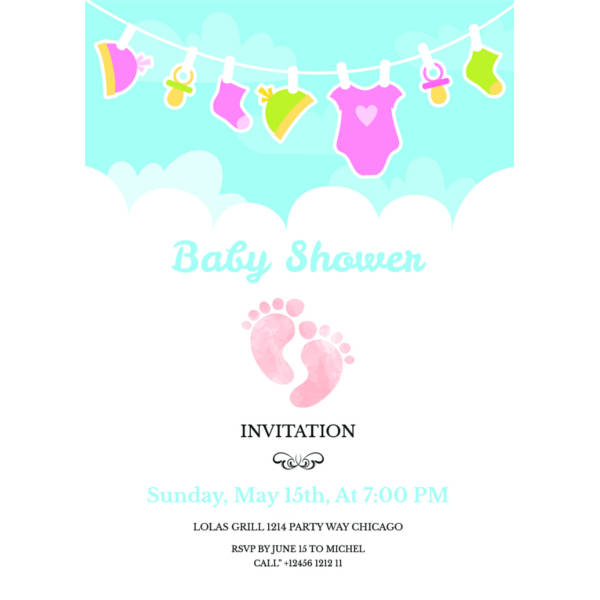 What Is a Baby Shower?

A baby shower is a celebration held in honor of an expectant mother, though there have also been instances of a baby shower event held after the birth of the baby. During the celebration, the mother or the child is presented with various gifts from the guests. Though these gifts are given directly to the mother, they are commonly meant to be used by the child, and these gifts would include baby clothes, blankets, milk bottles, and even toys. For some people, they would incorporate a baby shower with a gender reveal if it has not yet been done beforehand. And, just like any other exciting celebration, baby shower events will include games that will be played by the guests. 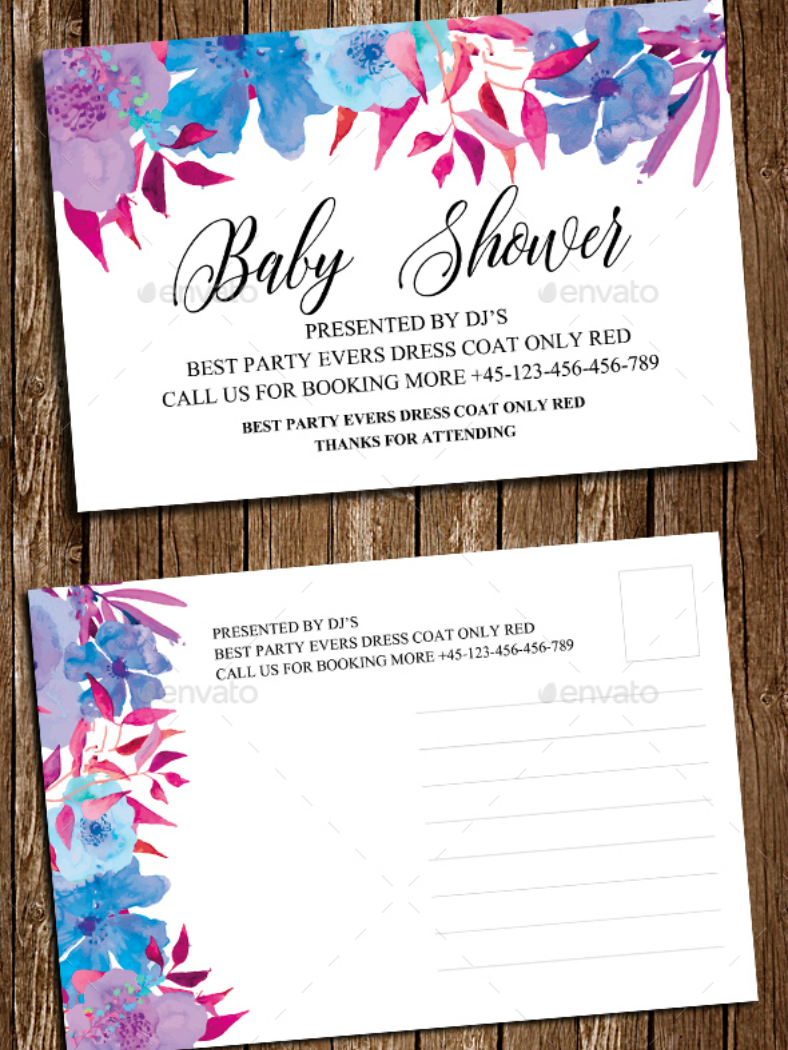 Make your invitations practical by utilizing a postcard theme. This way, you won’t have to put it in an envelope before sending it, you will only need to attach a postage stamp somewhere on the back. With regards to the design, this invitation postcard template is such a beauty with its floral elements that resemble watercolor illustrations. 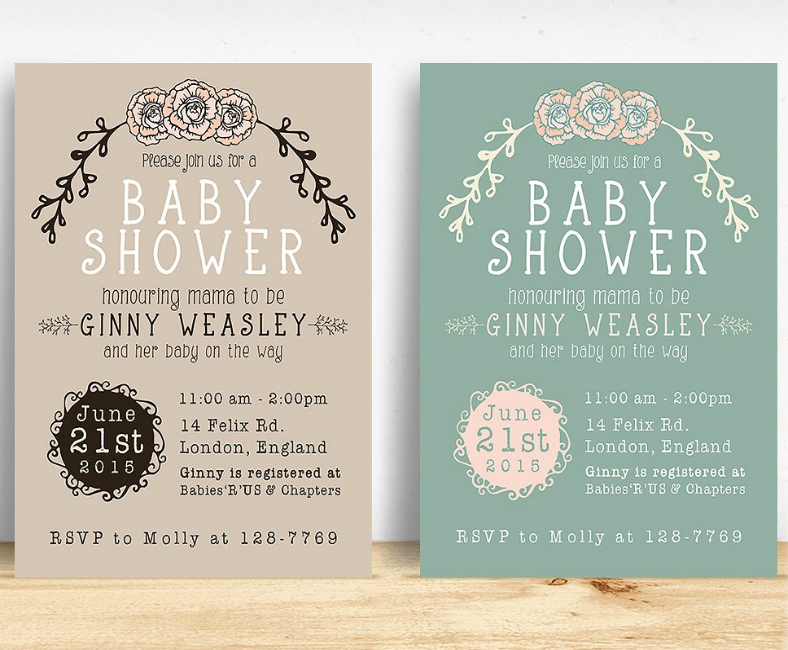 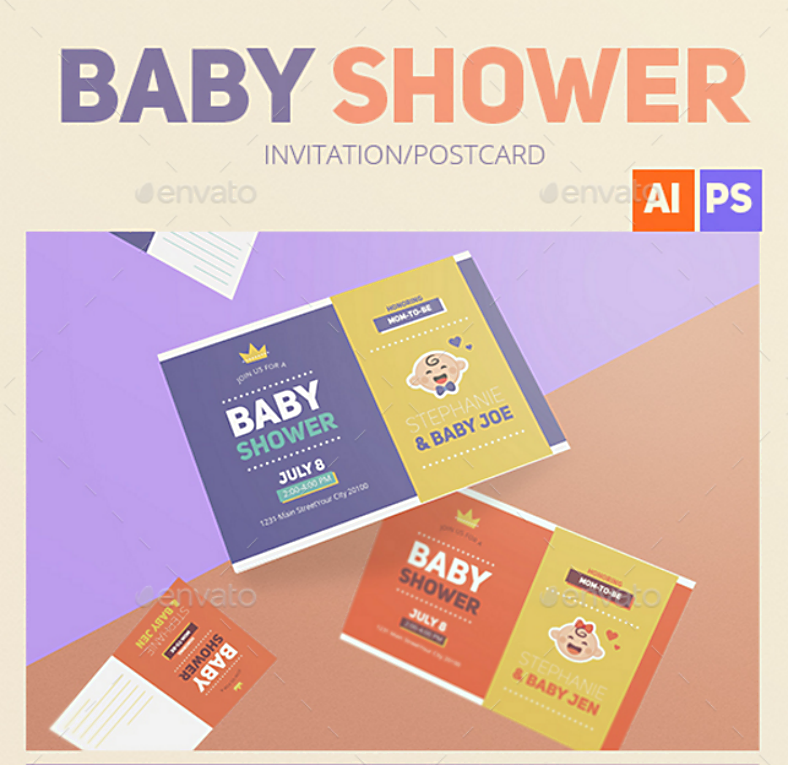 Here is another invitation template that utilizes a postcard style, and you can actually choose from among two different colors depending on the baby’s gender. However, if you feel like the preset colors don’t fit the theme of the event, you may be able to change it during the editing phase. 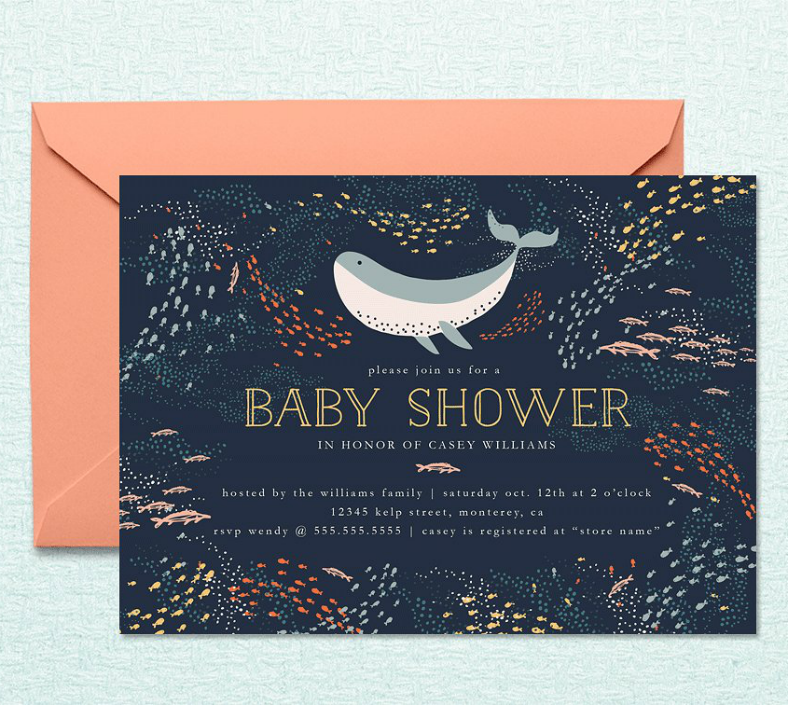 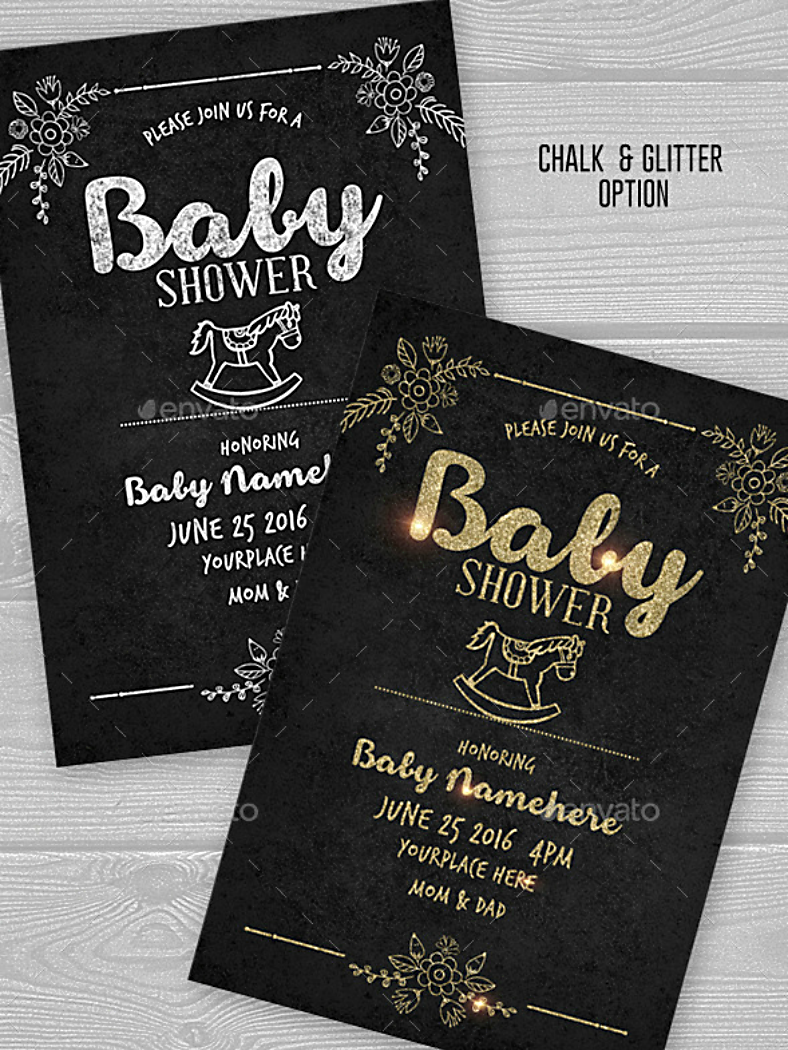 To those who prefer something elegant yet simplistic, you may probably be interested in the invitation design template shown above. For this template, you can choose between a gold and a silver theme, the common feature between the two color schemes is the shiny, glittery effects on the elements. 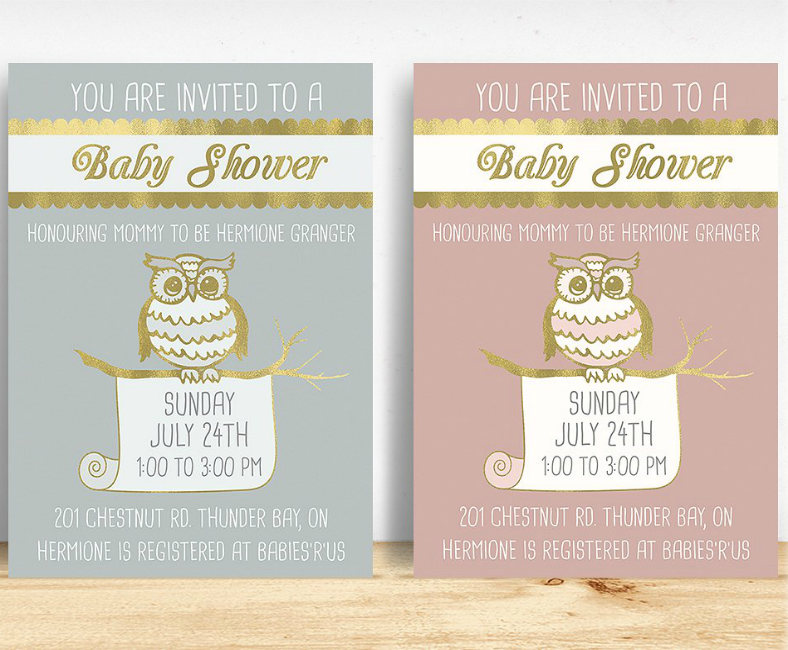 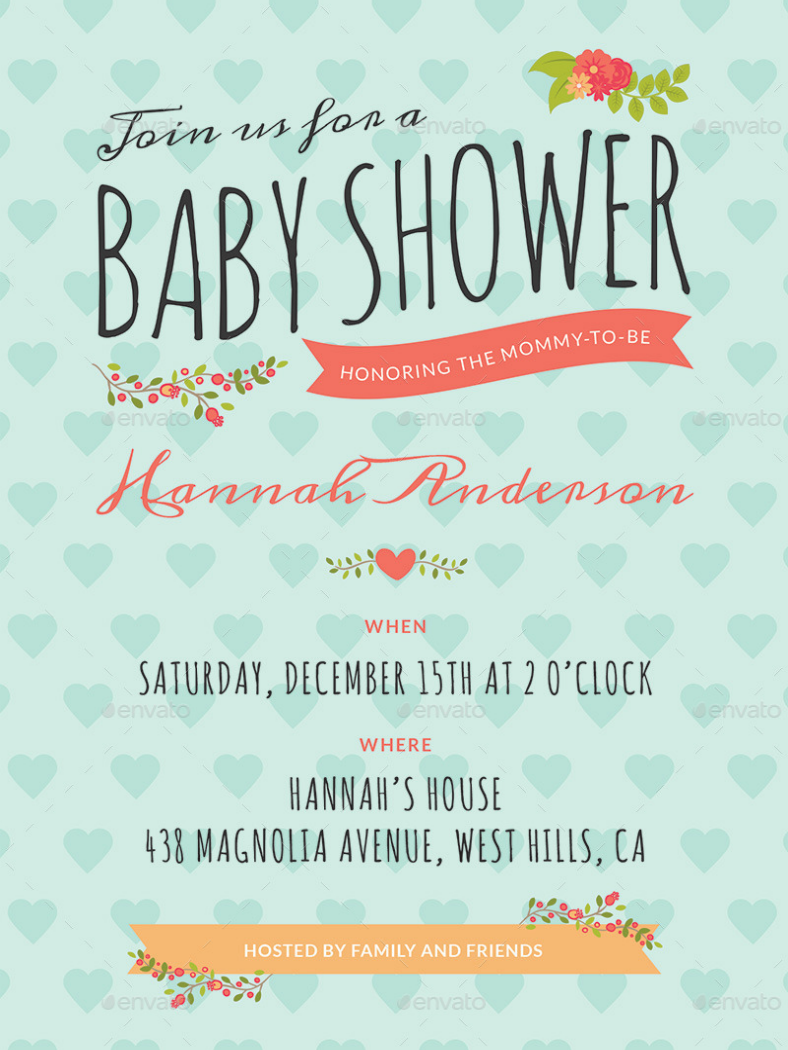 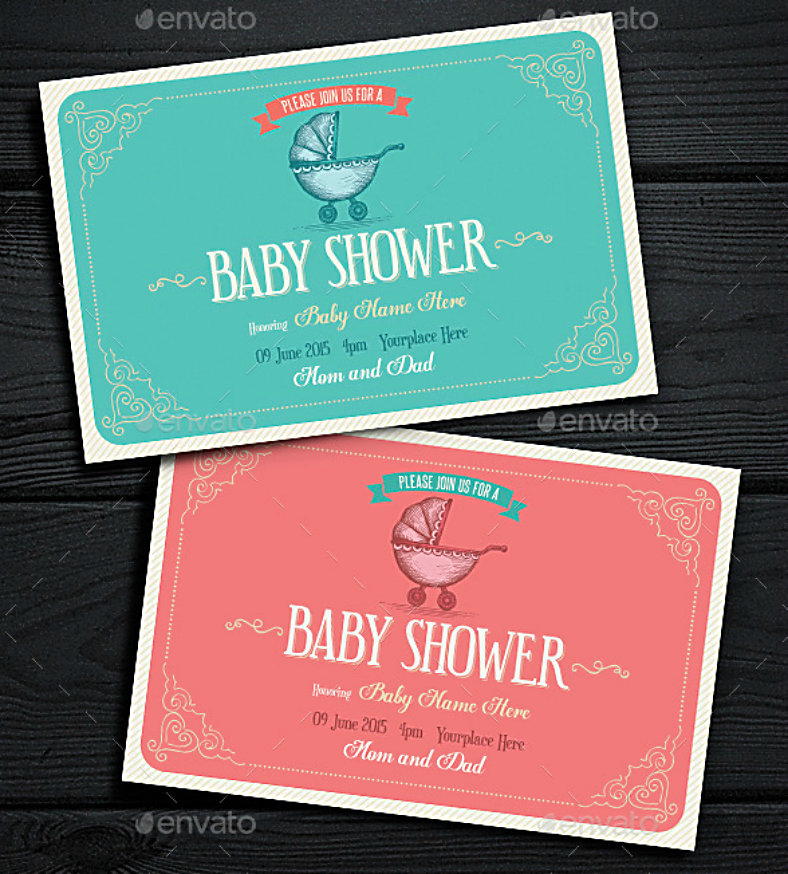 If you prefer to go vintage-styled, then the mesmerizing invitation template above may be what you are looking for. Just like most of the templates in this article, you can choose from among two colors depending on the baby’s gender, though you are still allowed to change the hue to better suit your preference. You may also see baby shower invitation examples. 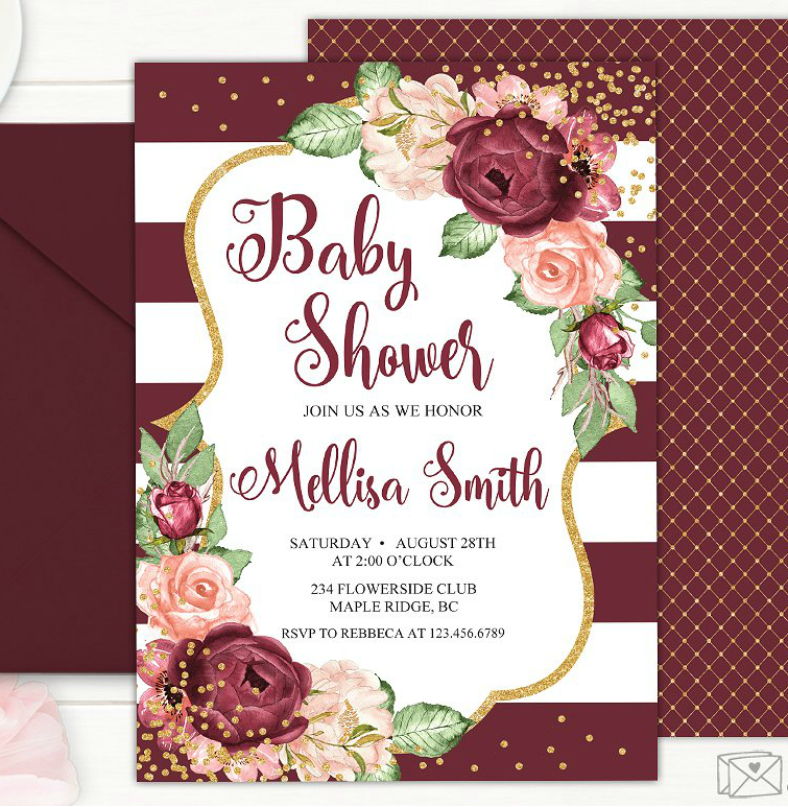 Who Usually Throws a Baby Shower?

At the introduction portion of this article, we have mentioned a few baby shower etiquette that should be considered if you are thinking of going the traditional way. These etiquette include who and who should not be allowed to throw a baby shower party. For this section, we will be discussing further with regards to those etiquettes so that the next time you’ll consider throwing a baby shower, you’ll be able to determine whether or not you are eligible to do so. You may also see baby shower cards.

1. The expectant mother is not allowed to throw a baby shower for themselves, it should be done by somebody else.

2. While it would be best that a baby shower is planned, but it should not be the result of a request made by the expectant mother. You may also see printable baby shower invitations.

3. Someone in the expectant mother’s family is allowed to throw the baby shower, though in most cases, it is usually done by the mother of the pregnant woman. You may also see baby shower invitation designs.

4. But in other instances, if a sister or a close friend decides to throw a baby shower for the expectant mother, it is also acceptable. You may also see baby shower invitation banners. 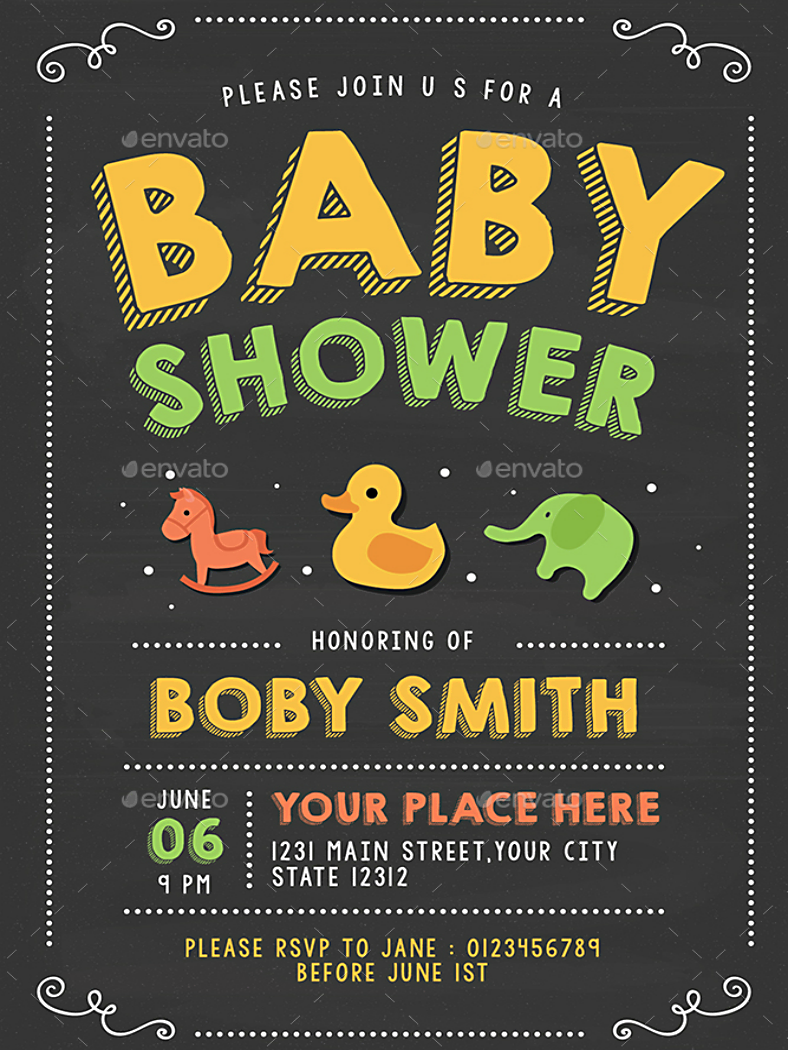 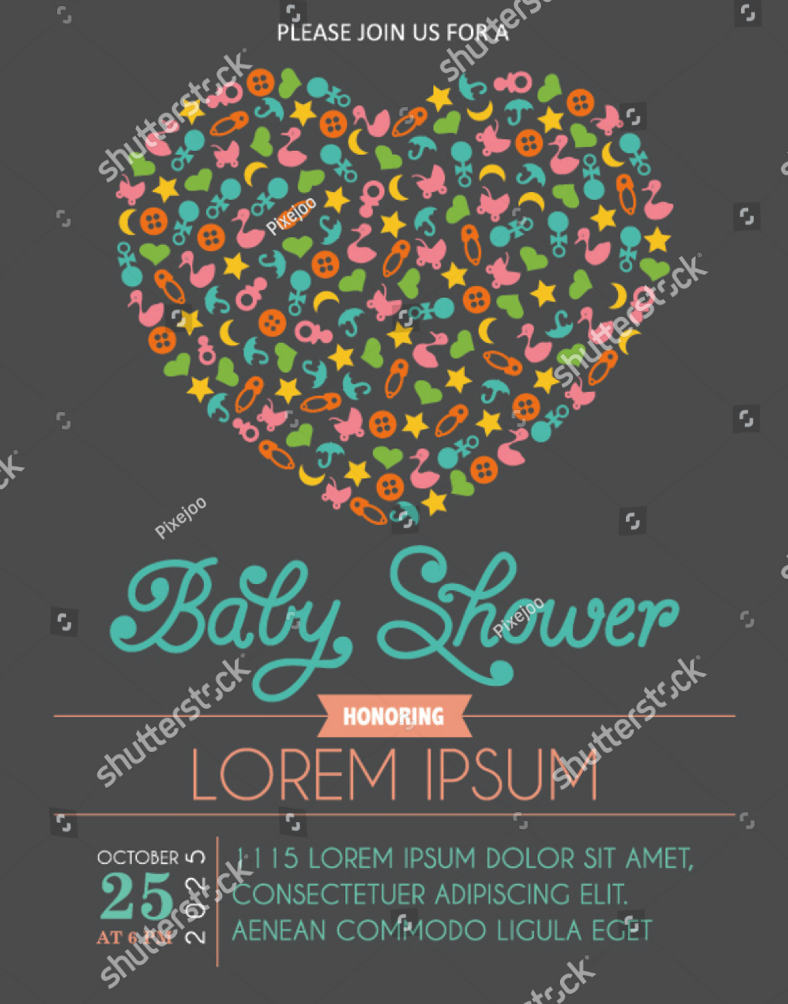 Spread the love and make it evident on your invitation card. With this party invitation template, you can do just that with the heart-shaped element that consists of different baby-related objects. 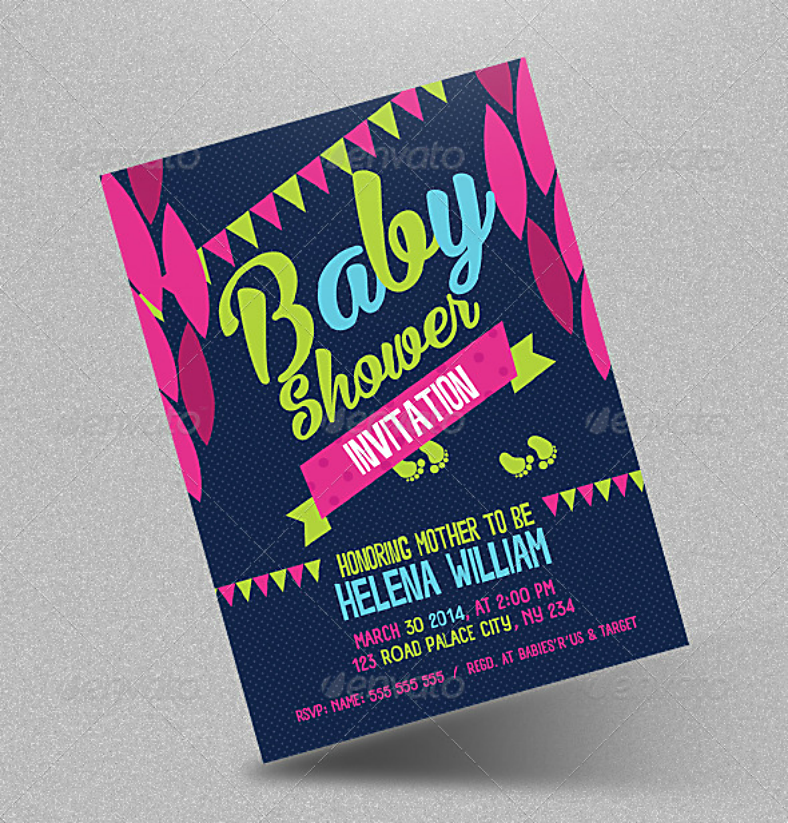 When Should You Throw a Baby Shower?

Ideally, baby showers are thrown within four to six weeks prior to the baby’s expected date of delivery. This way, the expectant mother will have the space they need to give them the chance to still enjoy the party without having to worry about severe contractions or false alarms. Also, throwing a party within this time frame can give the pregnant woman a chance to prepare the necessities they need for their baby from the gifts that they will be receiving during the party. You may also see whale baby shower invitations.

For the planners, on the other hand, just because the baby shower is still on the pregnant woman’s third trimester, it doesn’t mean that you also have to wait for that time to plan for the party. As early as the first trimester, you should already start planning for the baby shower in order to give yourself enough time if changes need to be done. The party elements that would require planning include the food, games, venue, date and time, and the invitation for the guests. You may also see baby shower photo invitations.

Luckily enough, you don’t have to worry too much about the making of the invitations since a lot of your time has already been spared with the help of our templates. Which is why we strongly suggest that you download and use our baby shower invitation templates to let you focus more on planning the other aspects of the event. 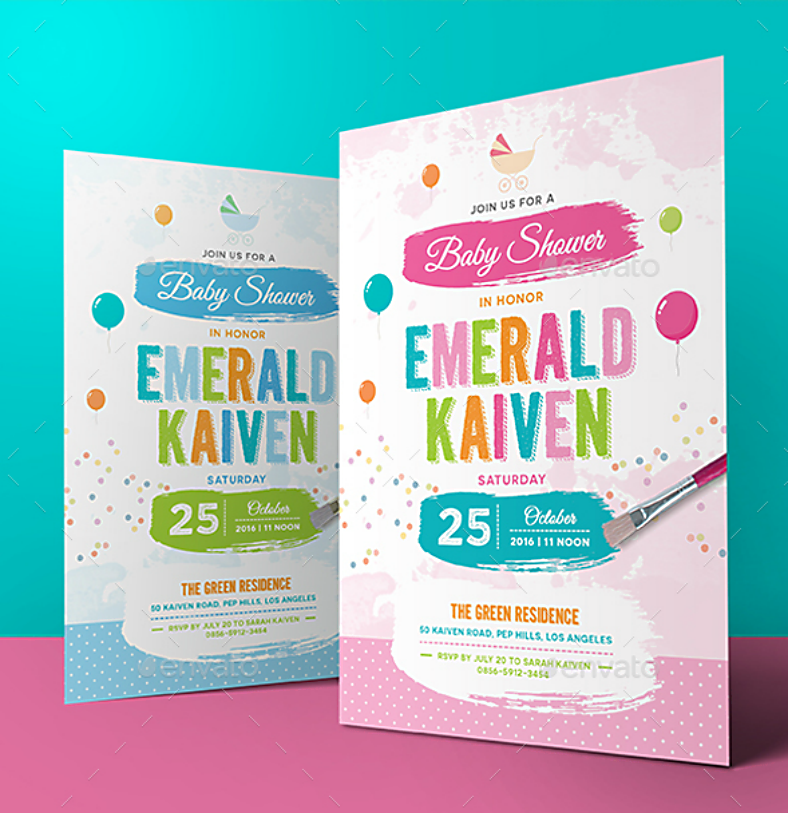 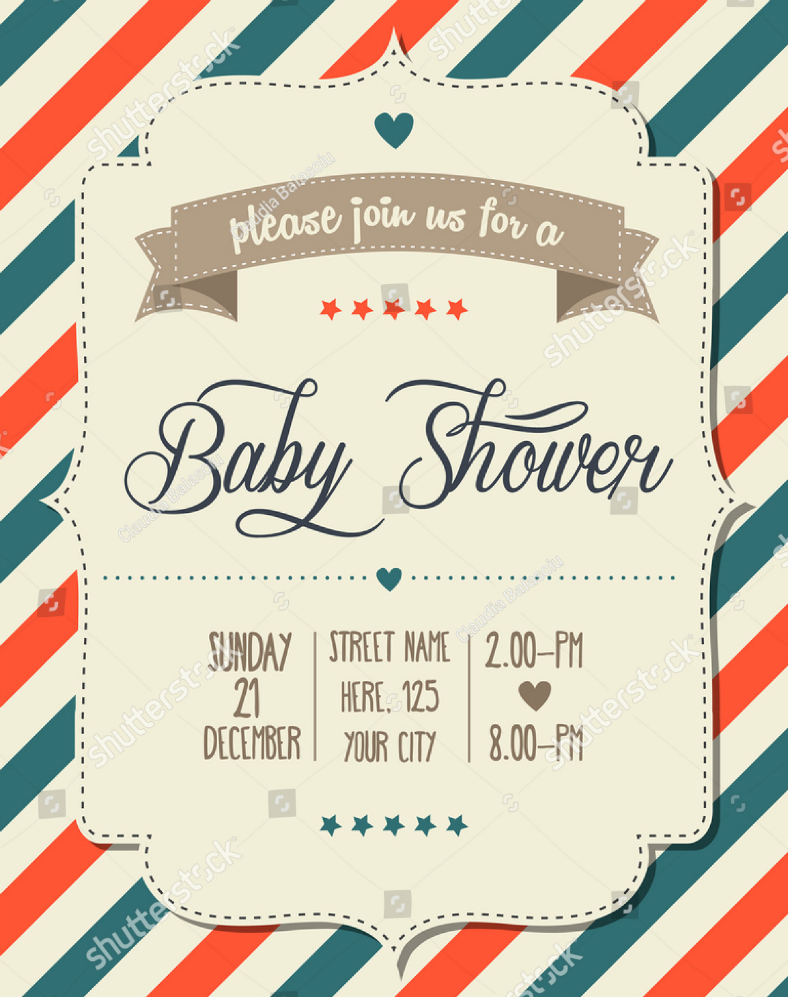 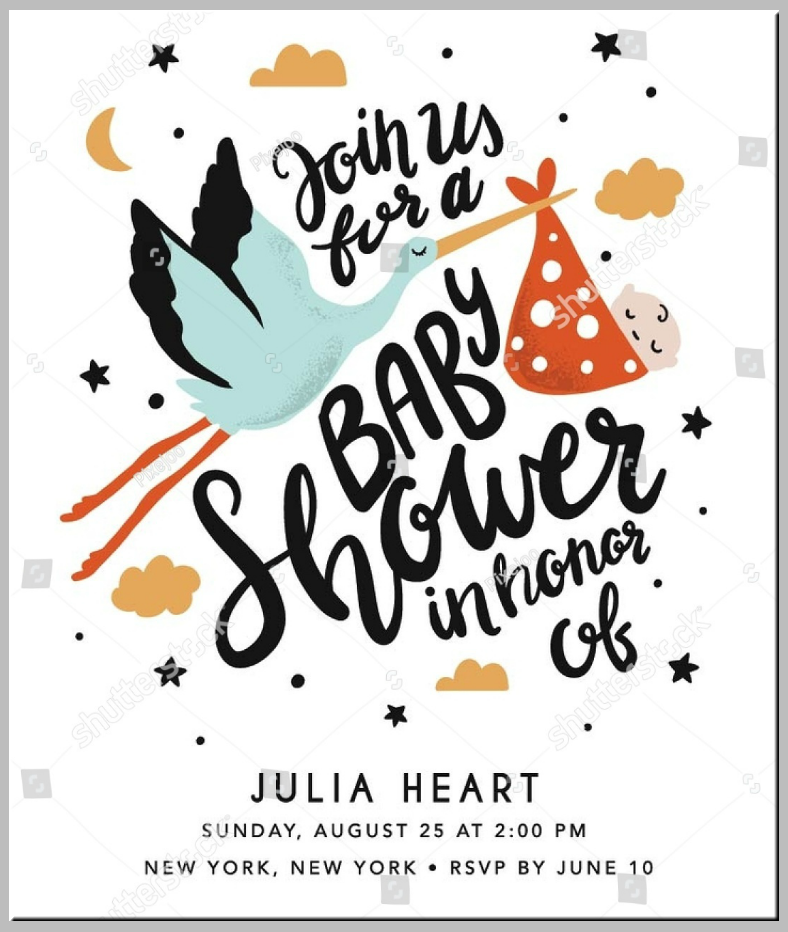 According to Greek mythology, the goddess of women Hera turned her rival into a stork, and this stork attempted to steal her baby. In Egyptian mythology, on the other hand, the person’s soul is commonly represented by a stork, and the return of a stork would mean the return of the soul. There have been many stories the associated storks with babies, but the most common one that people know today is that storks are responsible in bringing a newborn baby right at their doorstep. If you find that story interesting, then you may also like the invitation template above. You may also see baby shower invitation postcards. 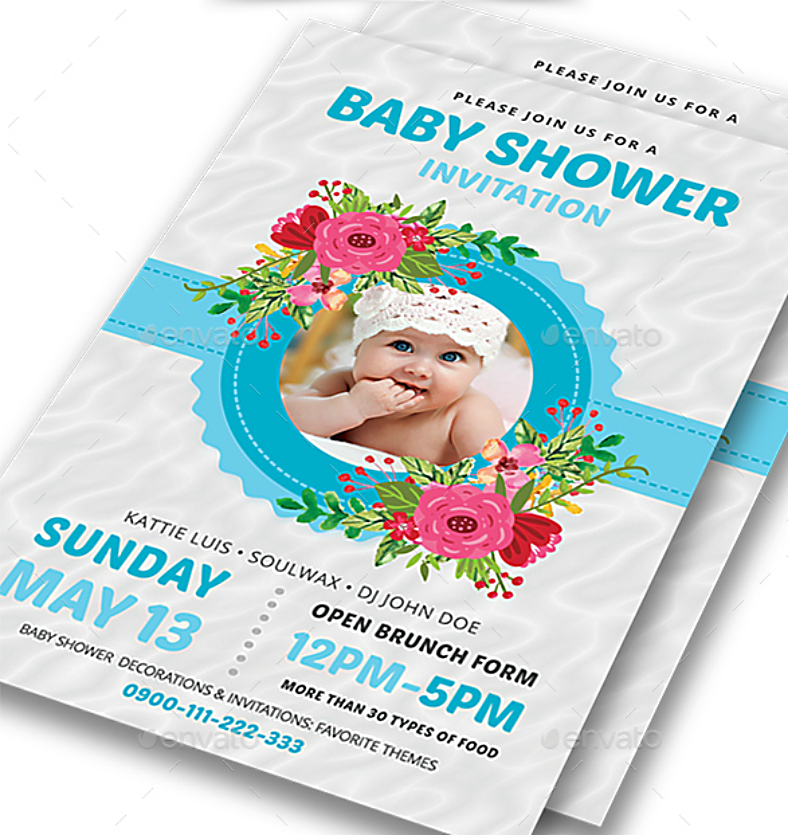 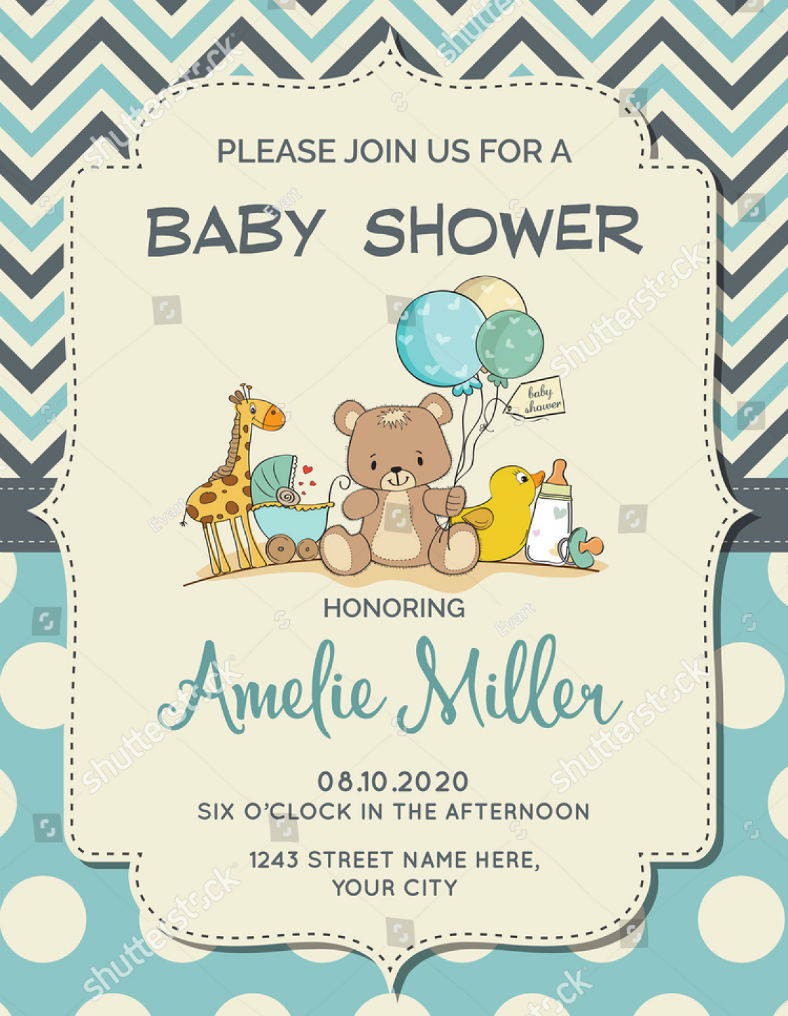 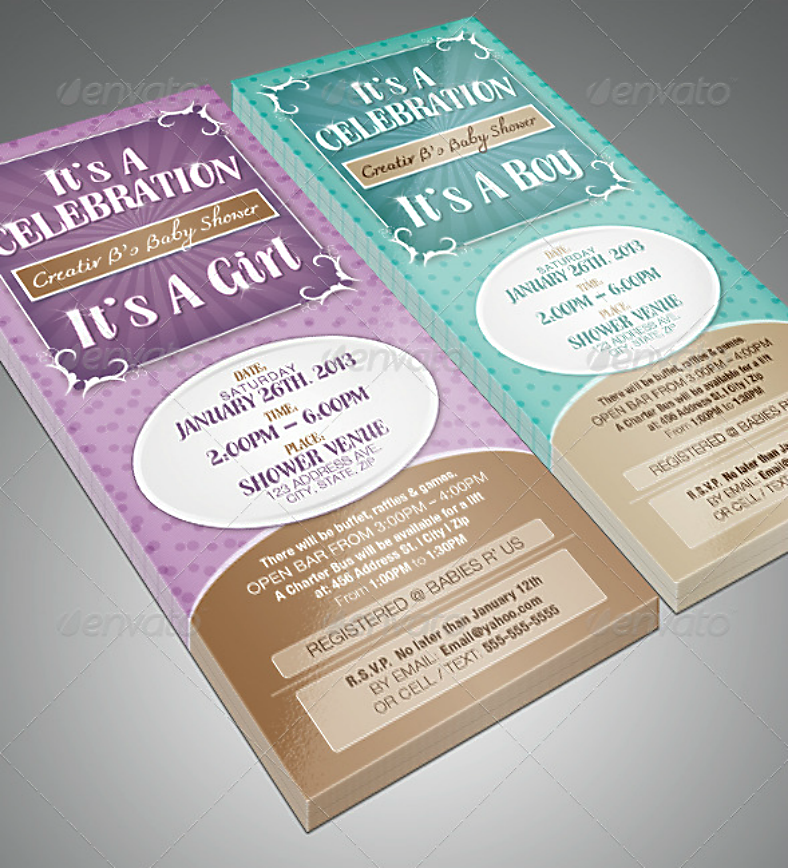 Baby Shower Traditions Around the World

As we may have already known, different cultures would mean different practices of certain celebrations, and the baby shower is no exemption to that statement. Across the entire globe, there are different ways that the baby shower is celebrated, most of them may closely resemble the practice in the United States, Canada, Australia, and New Zealand, while some may even be entirely different. How different could they get? We’re here to find out. You may also see butterfly invitations.

Baby showers are neither customary nor commonly held in the UK, though it has slowly been practiced in the recent years. Baby showers in the UK have followed the same traditions observed in the United States. You may also see diaper invitations.

A party very similar to a baby shower—called sadh or sadhbhokkhon—is practiced in Bangladesh. Here, once the woman reaches her seventh month of pregnancy, she will have to stay at her parent’s house until the baby’s due date. She will only be allowed to move back to her husband’s house after the birth of the baby. You may also see baby shower postcards.

According to a superstitious belief, it is improper for the parents to receive gifts for the baby prior to its birth. After the baby is born and within its first forty days, they are typically kept from the public to prevent getting exposed to infections. However, during this time frame, the family are already allowed to accept unsolicited gifts from friends and relatives. You may also see couples baby shower invitations.

An event called the manyue—which is very similar to western baby showers—are held for the baby, but instead of holding it prior to the baby’s birth, this one is held on the baby’s first month. You may also see folded invitation templates.

Here, their version of the baby shower is referred to as a stork party—taken from the story that babies were delivered by stork messengers. This celebration is typically held during the pregnant woman’s sixth month, usually involve silly themes and costumes. Men are not allowed to attend stork parties. You may also see gender reveal invitation templates.