When there’s an upcoming wedding, there will also be another event paving the way to this, and this event is to celebrate each of the respective party’s last days of being single. Many people say that these events are to celebrate the couple’s last days of freedom, but the word “freedom” seems to feel like an overstatement. These events are referred to as the bachelor and bachelorette parties for the groom and bride, respectively.

Of course, invitations will always be necessary when it comes to events. Sure, the host may simply notify the guests through other means, but invitations are indeed the best and most formal means. Below, we have some invitation designs and templates specifically meant for bachelor invitations. Feel free to check them out below before deciding to download any of them. 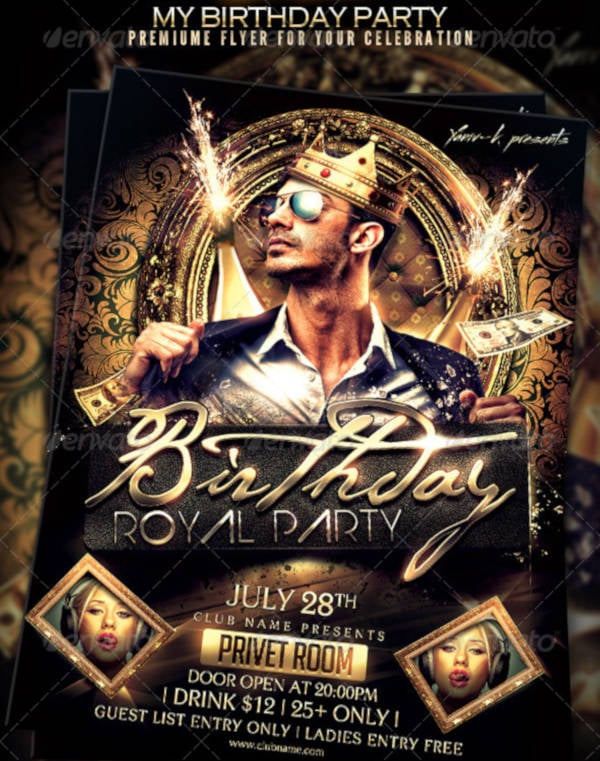 What Is a Bachelor’s Party?

A bachelor’s party—also known as stag party and buck’s night in Europe and Australia, respectively—is an event held for a soon-to-be groom. This is the male counterpart of the bachelorette’s party or bridal shower since it is held before the couple’s wedding, and is intended to celebrate the individual’s last days of being single.

If you’re looking for more templates, check out our other collection of party invitation templates. 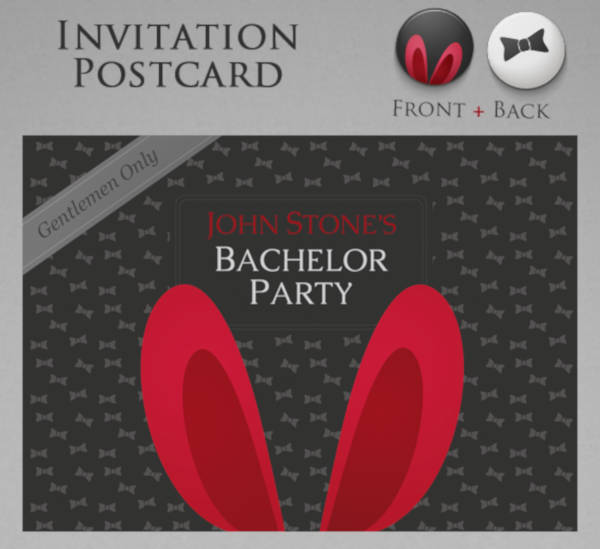 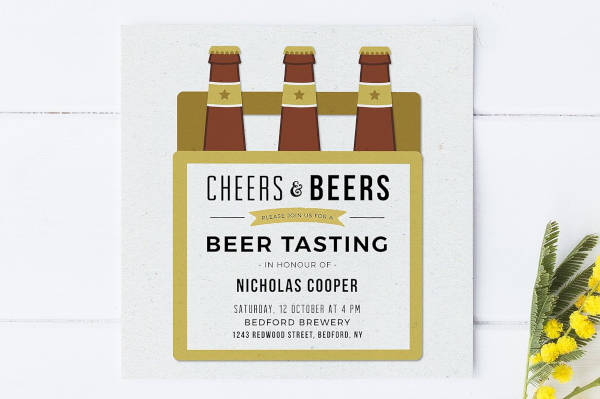 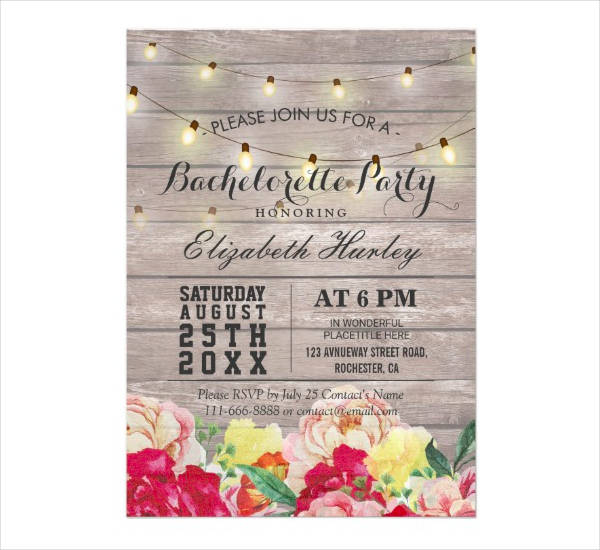 What Should Be Included on an Invitation?

When designing party invitations, it should always be able to provide the invitee with the information they need regarding the event such as the answers to the what, when, and where questions. You may even want to include an RSVP with your invitations—either attached on the sample invitation card or on a separate card—to determine the confirmed number of people who will attend the event. Now, to help you get started, here are the following elements that should be included on your invitations.

1. Name of the Honoree

The section that provides the answer to the who question. This is to inform the invitee with regards to who the party is meant for, or in this case, who is about to get married soon. You can also like rustic invitation designs.

Of course, how will the invitee know when the party is held if this is not found on the simple invitation. This section answers the when question.

The section that provides the invitee with the answer to the where question. This should contain the complete physical address of the venue, which includes the building number and street name. Just to make sure, you may even include a small map of the place if in case there are guests who are unfamiliar with the place. You may also like official invitation templates.

If in case the invitee needs to contact the host with regards to some concerns, this should be the phone number that they will use. If you prefer, you may use your email address on this section of the invitation, or you can also use both phone number and email address, whichever is more convenient for you. You may also like party invitation templates. 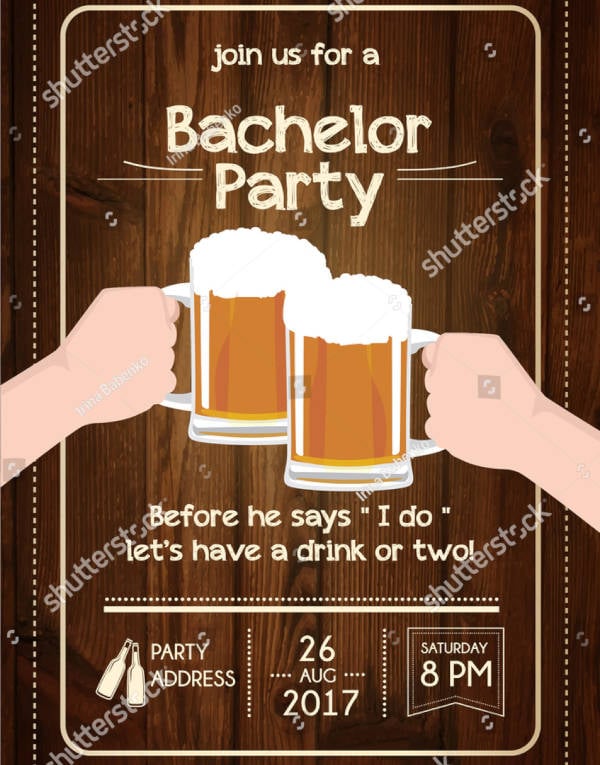 According to historians and researchers, bachelor’s parties actually take us back to the 5th century B.C., during the time of the Spartans. Though the main purpose of throwing the event remains the same—which is to celebrate the groom-to-be’s last moment of being single—the difference is that they held it a night prior to the wedding day, and that it only involved a feast and nothing more.

In 1896, a stag party was held by Herbert Barnum Seeley for his brother (now infamously known as the Awful Seeley Dinner) which ended up with an officer stopping the event. This party involved a dancer was said to have danced naked around and in the desserts. After the event, the Seeley family filed a complaint against the police officer for “conduct unbecoming to an officer of the law”. This resulted to bachelor parties being held “behind closed doors”. You may also like invitation samples.

During the early times, the term “bachelor” was originally used to refer to a “young knight undergoing training”, but was then used to refer to an unmarried man in Geoffrey Chaucer’s work The Canterbury Tales in the 14th century. By the early 19th century, the term ‘bachelor party” was then used by William Chambers in his Journal of Literature, Science and Arts, and was used to describe to a “jolly old” party involving men. You can also like invitation formats. 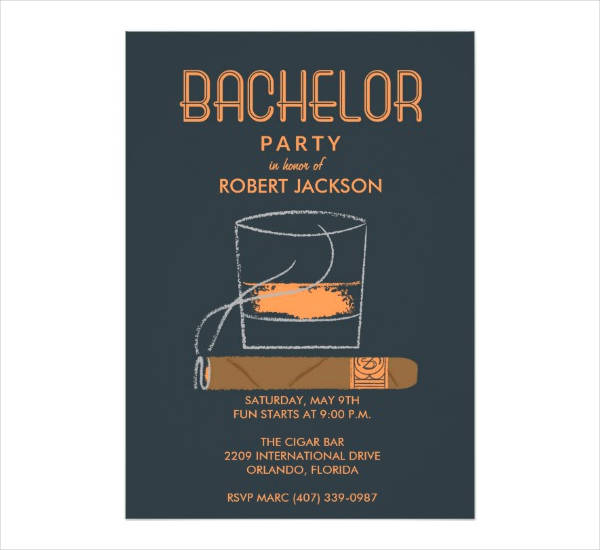 What Happens During a Bachelor’s Party?

As much as the bridal entourage want their soon-to-be-married friend to enjoy her last moments of being a single lady, the groom’s entourage also want their guy-friend to feel the same. After all, nobody wants to be left out, right? The difference is that—and this has nothing to do with being sexist—parties that are attended by mostly guys are usually much wilder. Which now leads us to ask ourselves, what really happens during bachelor parties? You can also like party invitation in PSD.

A rather crazy thing that you can expect during bachelor parties is guys binge drinking and getting drunk until they fall to the floor totally passed-out. This is to live the best moment and enjoy it to the fullest since the groom might no longer be able to do this after marriage. However, if the groom doesn’t drink alcohol, the people responsible in planning the party can always opt for alternatives that do not involve alcohol.

While bachelorette’s parties have their share of a half-naked man dancing around the bride-to-be, the men have their’s as well (a female stripper, of course). The groomsmen hire a stripper to dance for the groom-to-be simply to allow him to enjoy his last few days (or hours) of being a bachelor to the fullest. You can also read summer party invitations.

Well, we’re hoping it never gets to this since this is, well, somewhat crossing the line, but one night stands seldom occur during or right after the party. Usually kept a secret among the guys, friends of the bachelor usually get someone—either a female friend or somebody totally unknown to the bachelor—to sleep with him for one night. Then again, we really hope it doesn’t get to this. You may also like sample wedding party invitations.

Dirty or daring games are usually involved in bachelor parties, and it is almost always the bachelor who’s being dared to do embarrassing stuff. Since this is to let the bachelor live his last moments of freedom to the fullest, they might not be able to get a chance to do these crazy things once they are already married. You may also like potluck party invitations.

Here are even more sample invitations to those looking for more templates to choose from. 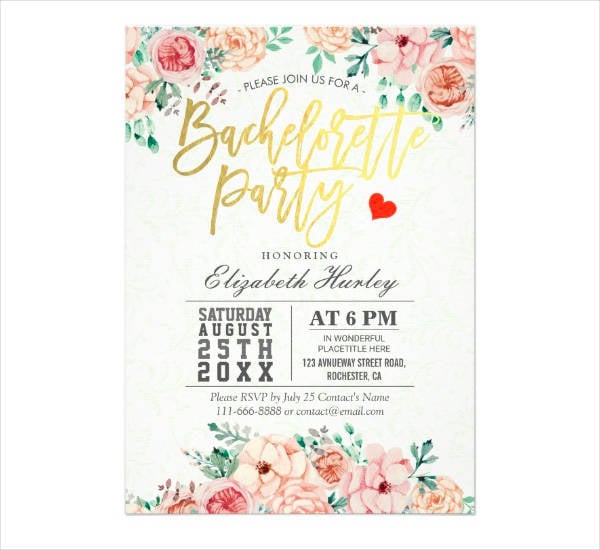 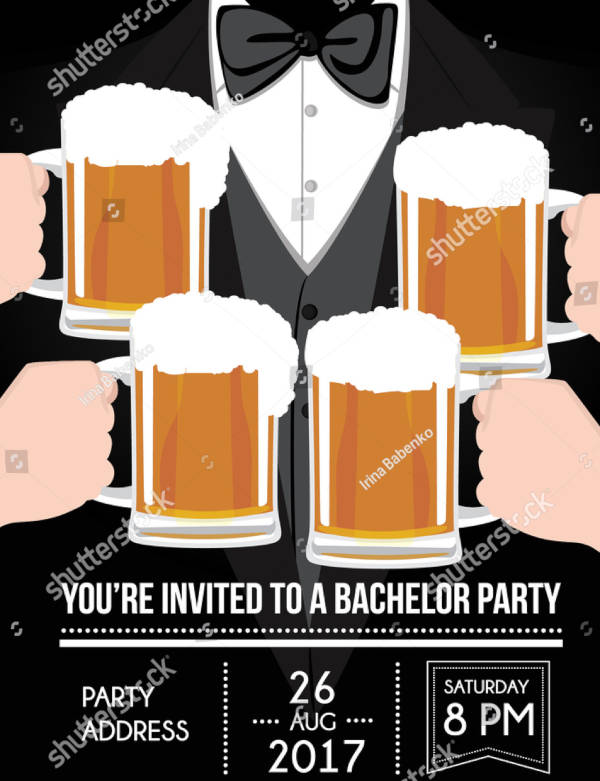 How to Plan a Bachelor’s Party?

To those involved in the planning of the bachelor’s party, you should give it your best since your friend who’s soon to be married will never get the chance to celebrate this kind of party again (unless of course, he gets married again, but we just hope he doesn’t). Though nothing can ever be perfect, there might by hindrances during the planning and execution of the event, but try to keep the party as close to perfect as it can be. So whether or not you’ve tried planning a bachelor’s party before, take note of the guidelines below on how you can pull of a great and memorable party for your bachelor friend. You may also like princess party invitations.

We did mention at the history of bachelor parties that this event was once held with open doors which resulted in complaints and issues with authorities. So after those problems, it was then decided that bachelor parties should be held privately, and it does seem appropriate considering that many of these events involve booze, gambling, and half-naked women dancing around the bachelor. You may also like dance party invitations.

So when picking out a venue, be sure that it’s somewhere private, such as a hotel room, a local bar that you can have to yourselves exclusively for the night, the bachelor’s apartment if they have one. If you want to go for something unique and a bit conservative, you can hold your bachelor’s party in mini-golf park, beach resort, or out in the woods. You may also like kitty party invitations.

2. Budget that You Are Willing to Spend

But if you’re low on the funds, then just keep it simple but still memorable. The best way to keep your expenses as low as possible is to check frequently for discounts and promos with regards to the planner and the venue. This way, you won’t have to spend a lot for an extravagant bachelor’s party. You can also read black & white party invitations.

This may also be dependent on how much you are willing to spend for the event, if you’ve got the funds for it, then you may invite not only the groom’s entourage but every male friend and relative of the groom. But if you’re trying to control yourselves into not spending a lot, then you can just include the groomsmen to the party. To sum up, the larger the number of guests, the more expensive it will be; the fewer number, the cheaper. So, which one will it be? Also, be sure to send out invitation card examples to each and every person on the list.