Planning to hold a party inside a bowling alley? That is actually not something new, especially for children’s birthday parties. The bowling alley can be the perfect place for parties since people can actually enjoy playing the game aside from interacting with the other guests. For sure, nobody will ever get bored when a party is held in a bowling alley.

Of course, if you are planning to host a party, you will need to send out invitation samples to the people who you want to come, how else would they know that you’re expecting them? Below is a collection of various bowling-themed party invitation templates and designs that we have gathered from the internet, feel free to use them to make your own invitations. 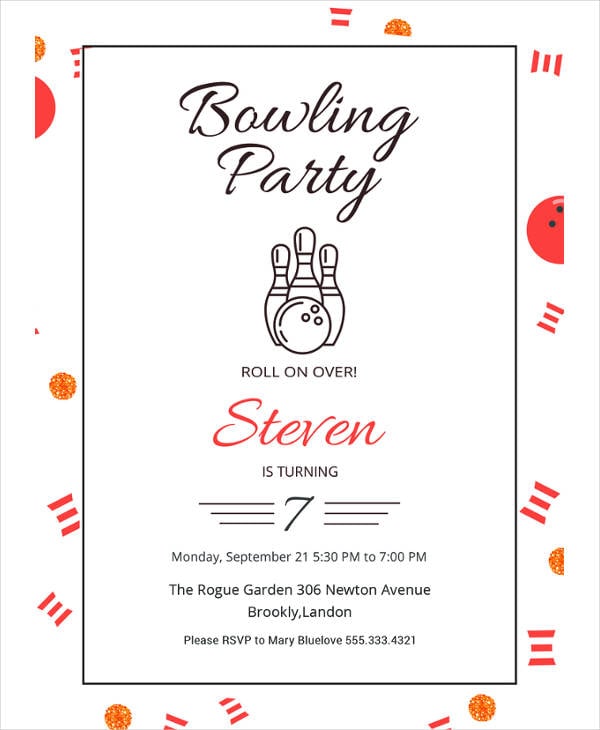 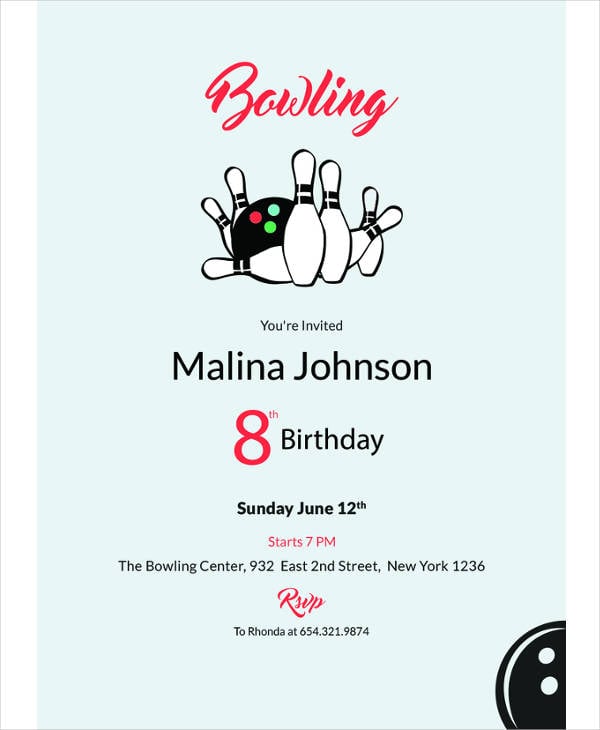 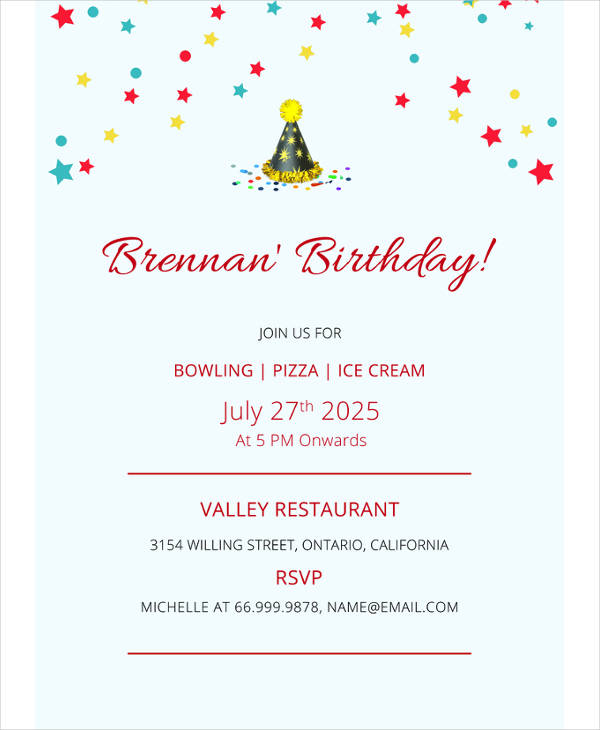 Do you want your birthday invitations to easily stand out? Then why not make them resemble actual tickets? With this, you can choose to either tear off the other half and give it back to the guest as a souvenir, or just let them keep the whole thing. After all, these are made to simply look like tickets, aren’t they? 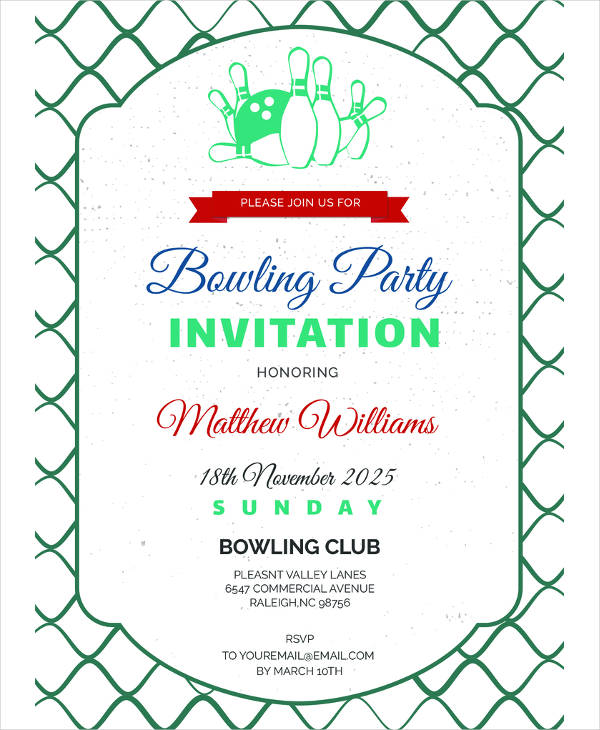 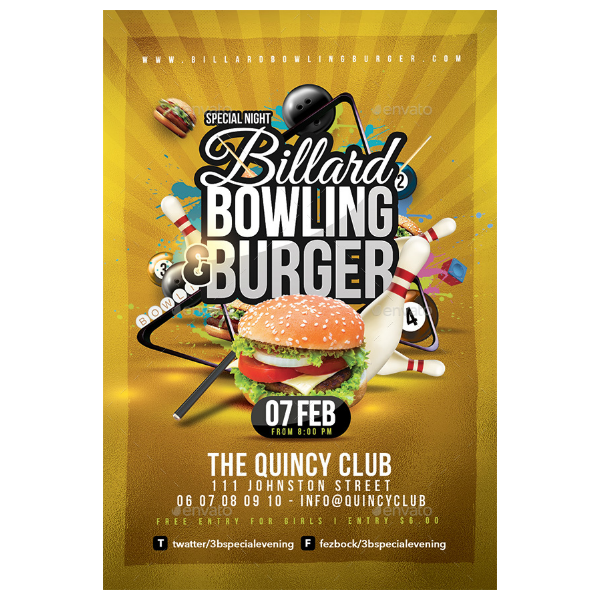 Make the birthday party really special, make the invitation sparkle with this printable birthday invitation template. Though this template may seem minimalist, but it has got enough dazzling features for it to look stunning. 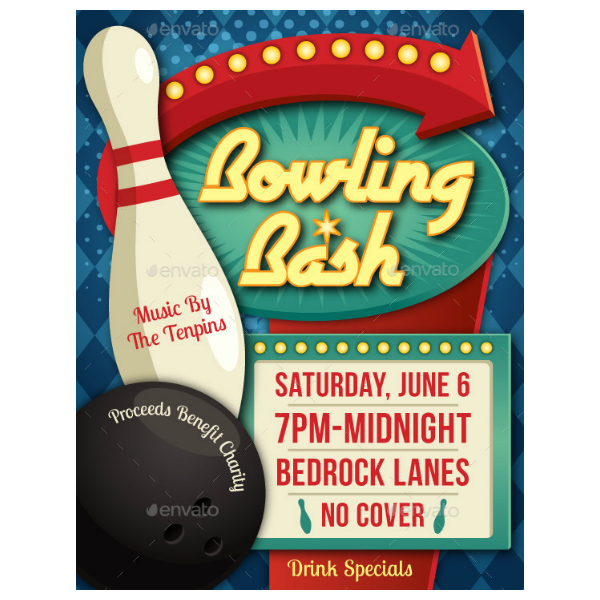 According to historians, bowling is one of the world’s oldest and most popular sports that it can be dated back to as early as 3200 BC. In fact, during the 1930’s, a British anthropologist by the name of Sir Flanders Petrie discovered an Egyptian child’s grave with a collection of items that seemed to resemble bowling. These items included a primitive type of ball and a set of pins that were all kid-sized. Along with these items were artifacts which came into existence in 3200 BC. From this discovery alone, it gives the impression that bowling has been around for over 5000 years already. You may also see birthday invitation designs.

Another claim on the origins of bowling was reported by German historian William Pehle, who said that the modern-day bowling originated in Germany. According to him, most Germans during 300 AD would carry around wooden pin-shaped rods called kegels, which would then be knocked down using rocks. Aside from just being a sport, this was also considered a religious practice by Germans since they believed that knocking down these kegels would pardon them from their sins. You may also see free printable birthday invitations.

After the Germans have made their claims, the English people debated that the sport actually originated in England. This was the result of an antique bowling green in Southampton that was found to date back to 1299. In 1366, because bowling caused the distraction of King Edward III’s troops from their archery practice, he decided to ban the sport. When King Henry VIII took over, the game was brought back, and several other games that involved pins were also invented. You may also see printable party invitations.

Bowling is said to have been introduced in the United States by the British, German, and Dutch settlers. The earliest recorded game of bowling in America dates back to 1670, but the first mention of the game was by Washington Irving in his 1819 book Rip Van Winkle. By the 1820’s, the sport was once again banned after people used bowling alleys as a gambling place, but this ban was only temporary and was withdrawn after a unified set of rules and regulations were implemented to the sport. You may also see birthday invitation templates in PSD.

The popularity of bowling continued to rise by the start of the 20th century with beer companies beginning to sponsor both professional and amateur bowling teams, the first broadcast of Championship Bowling, and the founding of the Professional Bowlers Association. In 1988, bowling was first demonstrated in the Olympics but no medals were awarded since it was not considered as an official Olympic sport. Plans were made to include bowling to the 2020 Summer Olympics, but it was eventually pulled back due to financial constraints. You may also see printable birthday party invitations. 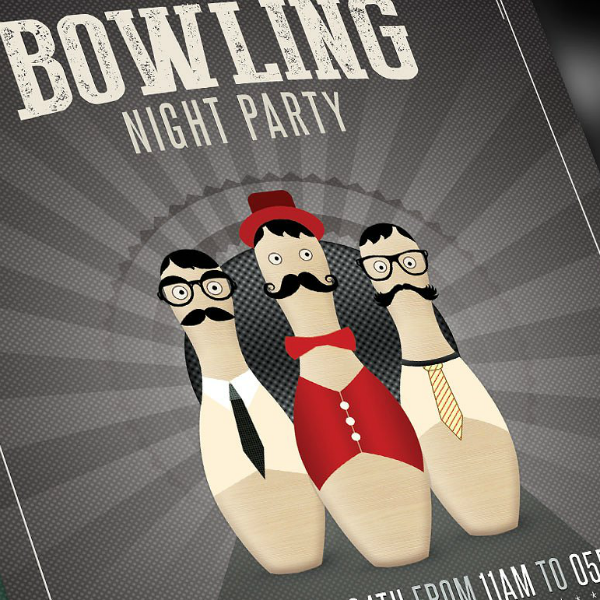 Make your invitation design bring out some giggles from your invitees with this template. Here, the bowling pins are given eyes and other facial features to make them resemble people, too bad they’ll get knocked down by the ball eventually.

1. Bowling can actually help in toning and strengthen the muscles, joints, tendons, and ligaments—particularly the ones around the arms. Bowling balls are generally heavy, and walking around while carrying it is already enough to strengthen your muscles. When the ball is thrown, a swinging motion is done to create a momentum, and this provides even more stretch and exercise to the arm. You may also see corporate party invitations.

2. Just like most sports, bowling can also help in weight loss, and while bowling only involves movements of a few parts of the body, moving constantly can actually help in burning excess fat. The parts of the body that constantly move in bowling include the legs as you’re walking back and forth, the arms as you lift and swing the ball, and the spine since you will need to have a good posture while carrying and swinging the ball. You may also see teenage birthday invitations.

3. Bowling is a good source of stress relief, and this is one of the reasons why the sport became highly popular in the United States and all over the world. And once you engage in sports, you will also be motivated to socialize with other bowlers, and this too can help in relieving your stress. A good social life with people who share the same interests with you can actually lead to longevity. You may also see retro birthday invitations.

4. Playing bowling can improve the coordination between your hand and your eyes. When trying to hit the pins with the ball, you will really need to focus on those pins with your eyes and coordinate that with the movement of your arm and hand in order to knock down those pins. The focus required from you when playing bowling can actually stimulate your mental awareness and concentration, which makes it a perfect game for both young and old. You may also see beautiful party invitations.

5. The rules of bowling are easy to understand, the sport itself is easy to learn (yet difficult to master), and the scoring system is simple. Because of that, bowling is fun for the entire family. When people play bowling, they can look at it not just as a competition between players, but as a simple pastime that the entire family can enjoy, regardless of the age. You may also see examples of birthday invitations. 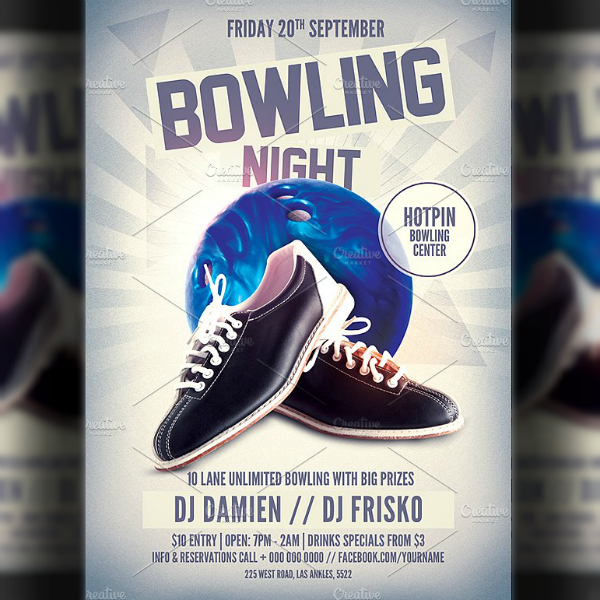 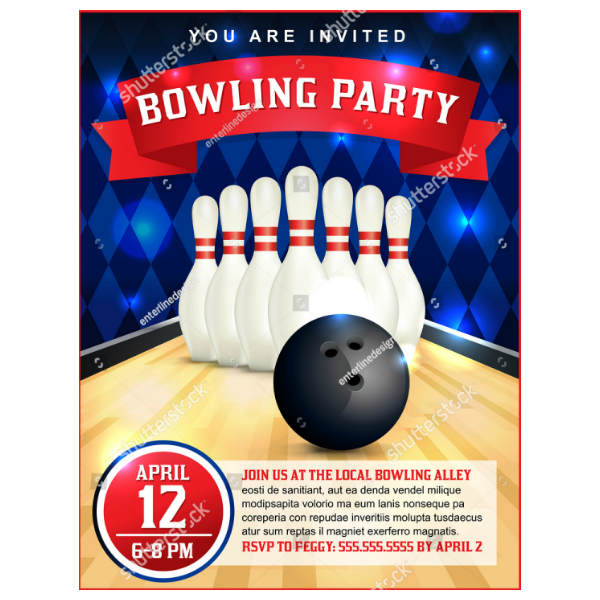 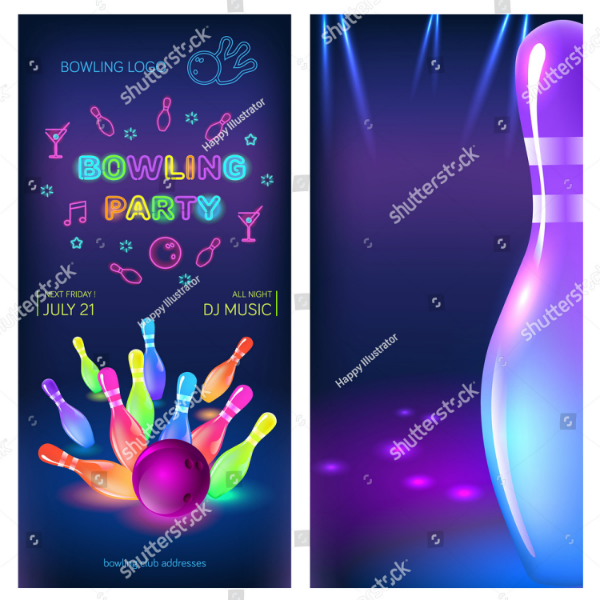 Here’s a design that takes us back in time to how things were being advertised in the past. For this retro invitation template, the illustrations, font, color scheme, and the other elements make it genuinely retro-looking, which is actually a good thing.

Some of the Most Notable Bowling Players in History

A left-handed professional bowler from Washington who accumulated a total of 43 titles and 6 Player of the Year awards by the PBA. Not only is he known for the record-breaking number of titles and awards, he also happened to be responsible in increasing the popularity of bowling in the United States. You may also see surprise party invitations.

A professional bowler who currently holds the record for the most all-time standard PBA Tour career titles at 47. He is also a 7-time PBA Player of the Year awardee, which is another record that he holds. As of April 2018, he has a total of 107 PBA titles, and he is also considered as the first player in history to have reached 100 PBA titles. You may also see free printable birthday party invitation.

He—along with Earl Anthony—are the two most important persons in the history of US bowling since they helped in boosting its popularity in the country. Aside from that, he is also one of the founding members of the Professional Bowlers Association. Dick Weber is widely known as the very first superstar in professional bowling. You may also see free party invitations.

Also known for his nickname “PDW”, he is the son of Dick Weber, and is a member of both the PBA and the United States Bowling Congress Halls of Fame. Pete Weber became famous for his rebellious and unorthodox nature, which earned him the title of being the “bad boy of bowling”. He is also known for his extended backswing and the side rotation he applies on his bowling ball. You may also see kid’s birthday party invitations.

A professional bowler from New York, he was inducted into the PBA Hall of Fame in 1987, and into the USBC Hall of Fame in 2009. Considered as one of the best spare shooters of all time, he is very well-known for being the first bowler to pick-up a 7 to 10 split on national television back in 1980. He is also known for his unique throwing style which led to many other bowlers following his footsteps. You may also see invitation card tempaltes.

If you already know how to design your own party invitations, then feel free to download any of the templates above.