I’m sure most of us have already heard the phrase “Parting is such sweet sorrow”, which is actually a line written by William Shakespeare in his tragic love story “Romeo and Juliet”. In the story, Romeo and Juliet were young lovers with families that disallowed their relationship. Because of this, Romeo had to visit Juliet in secret, and this is commonly depicted by him climbing up her balcony at night. Upon Romeo’s leaving, Juliet expresses her goodbye by saying the phrase, followed by “That I shall say goodnight until it be morrow”, meaning she is expecting him to visit again the following evening. You may also see Free Party Invitations.

Indeed, we don’t like saying goodbye especially if we have grown attached to the person that we are saying goodbye to. But regardless of how saddening saying goodbye is, we will have to do it since there will be times that we can never do anything about it. Because of this, the best thing that we can do is to honor them by putting together a farewell party invitation. During this occasion, the person leaving is provided a chance to give out their last hurrah before they actually bid farewell and are exposed to a completely new environment.

And of course, just like any other party, this one requires the use of invitations to be able to convey the needed information to others. Not only are invitations effective in gathering up guests to the event, but it is also the most formal way. If you agree with invitations as being formal and proper, then we may just have what you need. Below is a collection of creative farewell invitation designs and templates that we have gathered from the internet, and these templates come in PSD and AI format. If you’re ready, scroll down to check out the templates.

What Is a Farewell Party?

Basically, a farewell party is an event that is held to honor a person who is leaving to another place, though it doesn’t necessarily mean that the person will never be seen again in either the near or distant future. Also referred to as a going away party—or despedida, in Spanish—this is considered as the best and most memorable way of saying goodbye someone close.

And just like any other party invitation, this one involves the gathering of people who are close to the person leaving, and these guests will cherish their last moments with the honoree before the latter bids farewell. While the idea of saying goodbye seems saddening, farewell parties are commonly lively and exciting so as to help the honoree build memories that they can treasure after they leave. 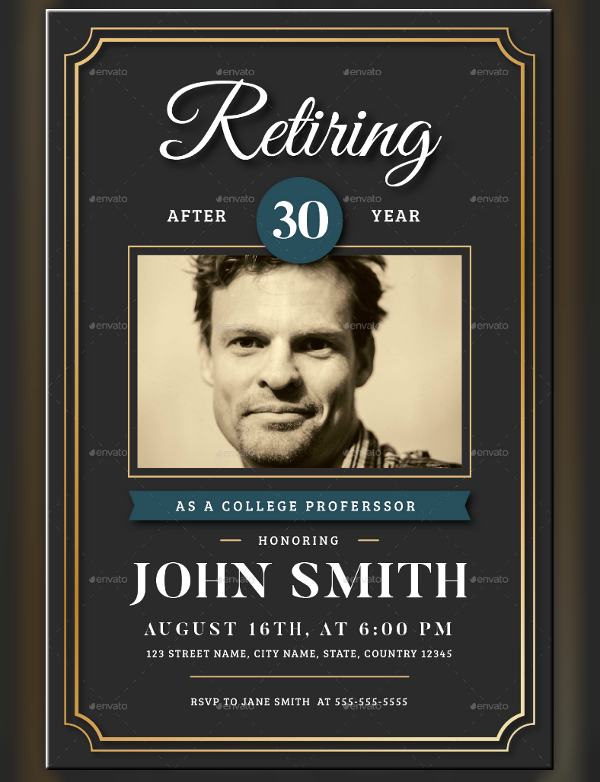 Things to Know About Retirement

Thinking about retiring? Or do you know someone who is? If so, then try asking them how they feel about retiring or if they are ready for it. Let’s face it, people are divided when it comes to retirement invitation, some are looking forward to it while there are also people who are still thinking twice about it. In reality, it totally just depends on the person but they may also want to seek other people’s advice. To provide you with some insights, here are some interesting facts about retirement that you may want to know.

1. According to a recent survey, the number of people who are doubtful whether or not retirement farewell invitation will be comfortable has risen when compared to the survey done the previous year. With regards to being comfortable, it actually refers to having enough financial resource for the couple or family throughout the retirement.

2. For retired people, they will slowly come to realize that they will be spending most of their time by themselves and doing nothing, which results in boredom. The best way to overcome boredom resulting from retirement is to engage in volunteer work. That way, even though you won’t be paid for your service, but it’s a lot better than spending most of your time watching television, sleeping, or simply being unproductive.

3. The early part of retirement party may need a lot of adjusting, unless you have been waiting for this moment for a long time. In relation to the last bullet point, the retired person will realize how boring it is to be alone and have nothing to do and will become uneasy with being unproductive.

4. Most people who retire have insufficient to no retirement savings, which is somewhat saddening. This, too, is based on a survey conducted recently, and it ended up showing that people still don’t realize how important it is to save, especially when approaching retirement. you may also see Retirement Party Invitations.

5. And lastly, with regards to healthcare costs and insurances, people may need to spend a massive amount from their pocket just to avail the healthcare services intended for retired individuals. Though this is highly likely to happen, you may also increase your chances of spending less for these services by keeping yourself as healthy as you can by eating healthy and exercising regularly.

Check out the event invitation template above which is actually made to resemble ticket stubs. As you can see from the samples above, you can actually choose between three titles that you can use to refer to the event. 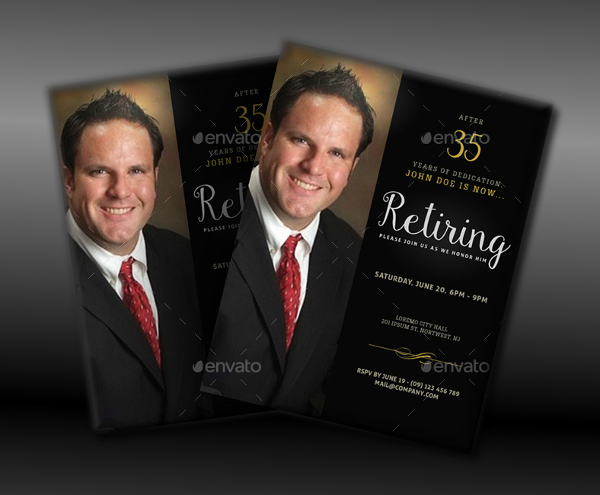 Pulling Off a Rustic Look

Rustic, we have heard this term so many times but do we really know what it is? When we hear that word as a theme for events, we commonly associate it with what see at countrysides, but it’s actually more than just that. To put it simply, rustic invitation themes are simply the outdoors, taking that concept and adding it onto a design. Read the list below to find out more about the rustic theme.

1. Rustic themes commonly involve leaves and wood, and it doesn’t necessarily have to be the actual thing but simply an image or the feel of it. When creating rustic designs, simply add a background that resembles a wooden surface, and you may even want to throw in some images of leaves—preferably autumn leaves—to complete the look.

2. What is it about autumn leaves that make them more preferred that regular green ones? The answer to that is the color, and we are already aware by now that the color scheme is able to contribute to the feel of a design. With rustic themes, there are actually a lot of colors aside from the shade of orange seen on autumn leaves, and this includes pastel pink, lavender, moss green, and chocolate brown. you may also see Rustic Party Invitations.

3. To easily achieve a rustic invitation look on your design, you may also consider giving this go-to strategy a try. Rustic-themed designs also resemble DIY creations, and if you want your design to look rustic, simply make it look like it is actually homemade. 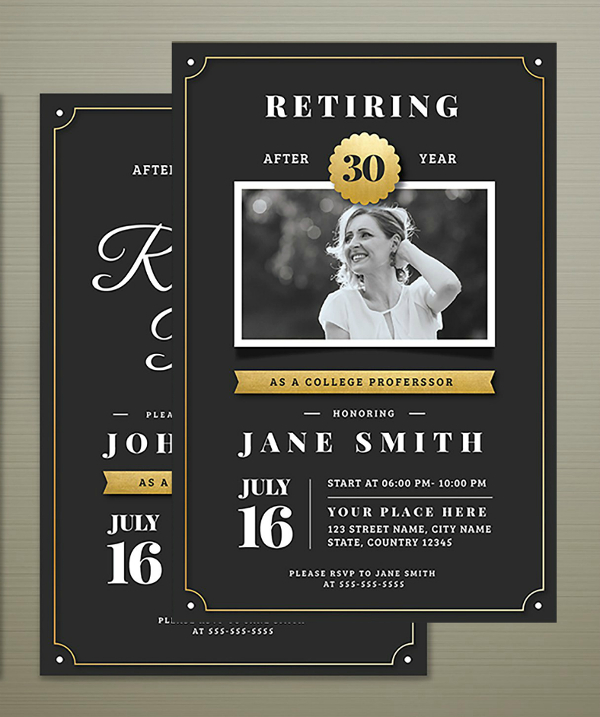 There are multiple ways of saying goodbye to someone, and the invitation card template above shows just that by translating the word in different languages. 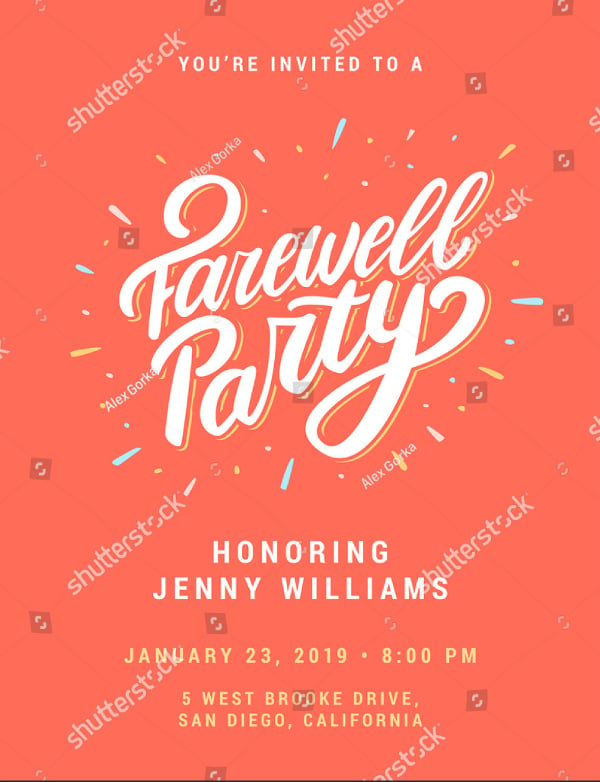 How to Make Your Own Invitation Cards?

Making your own invitations is actually not that hard if you only know how to channel your inner creativity and bring that our to your creations. And of course, you may also need the necessary tools and resources to help you create them. But when it comes to the process, below is a list of guidelines that you may want to read to help you out in creating you very own event invitations.

1. Decide on the theme of your invitation, and to really make it work, go with a theme that’s compatible with the one you’re using for the event itself. For example, the invitation template above shows a sparkly unicorn theme, make sure to incorporate that sparkly theme to the event. This way, the invitee will already have an idea with regards to the tone of the event.

3. To save you a lot of precious time, refer to the internet for pre-designed invitation card templates that you can download and edit. This way, you can save yourself the time and effort from having to make your invitations from total scratch.

4. Once you have found the template that works for you, download it to your computer and edit it. Assuming that you have made a draft of the invitation card’s appearance, this stage will go very smoothly since you already have an idea as to the overall look of your invitation card.

5. After the editing stage, have your farewell invitation card design printed on either a card stock or a thicker-than-usual piece of paper. And once that’s done, you can then start sending them out. 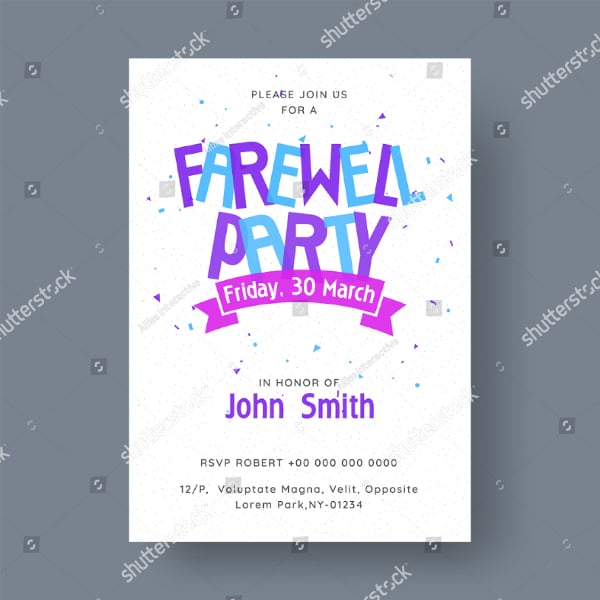 Check out the sample above and see if it interests you. If you’re planning a lunch party, we also have lunch invitation templates for you. 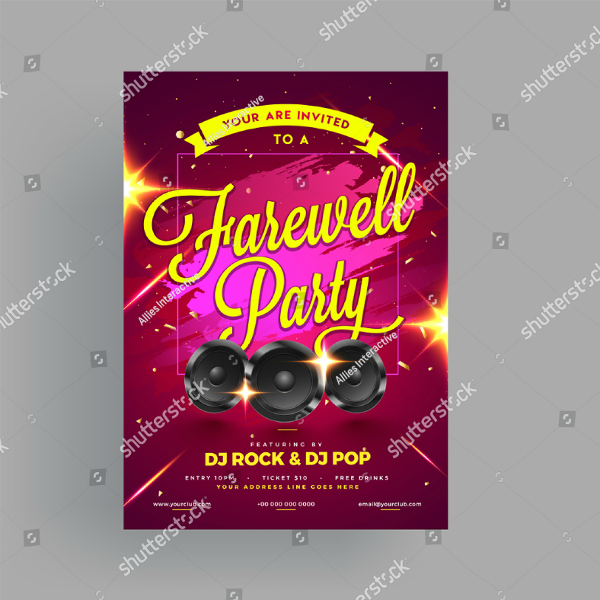 Looking for a very simplistic look for your farewell party invitation? Check out the typographic dinner invitation template above, you will never go wrong with it. 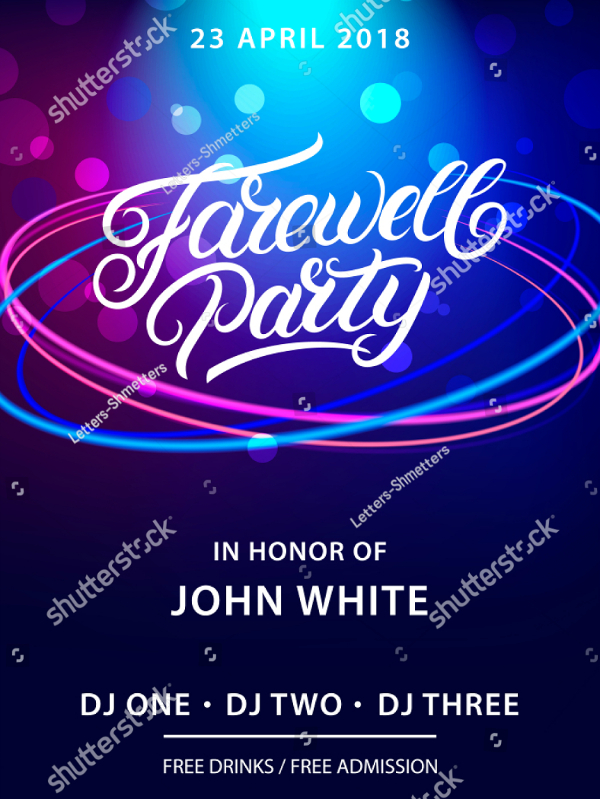 Make the event even more livelier and colorful by using the artistic event invitation template above. Celebrate a fiesta in honor of the person leaving instead of making them feel sad.