When we hear the word monster, it is usually something that frightens people. It’s true, monsters are something that are beyond the regular species, or in other words, they are fictional creatures. This is the reason why we get scared of them, because we have no idea what they are and how they would interact with humans. You may also see personalized birthday invitation templates.

But then again, monsters are not always scary, and we have already been accustomed to that since those television shows which featured monsters as the main characters. If you are planning an event and you want monsters to appear on your invitation cards, then look no further. You may also see photo birthday invitation templates.

Below is a collection of monster event invitation templates and designs that we have gathered here for you. Some templates feature scary monsters, while some also feature cute ones. Whatever type of event you are putting together, or whatever the theme of your event may be, we assure you that at least one of the templates below will work on your favor. Start scrolling down to see the templates yourself. 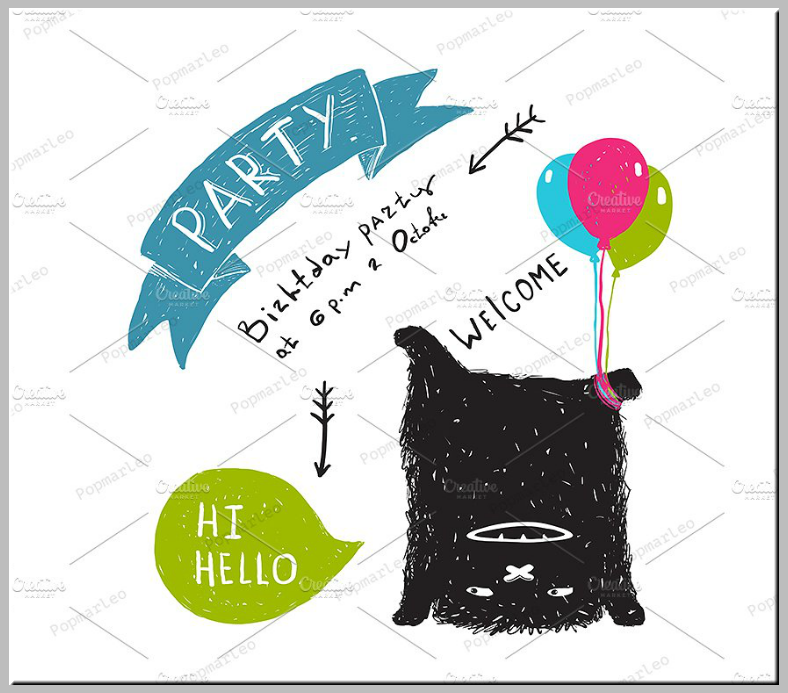 Seriously, it took me a very long time to realize that the monster on this template is actually doing a headstand, and the balloon is actually tied to its leg. If you look closely at the elements on this template, they appear to have been illustrated using a pen, as evidenced by the uneven strokes and the hollow spaces within the elements. Nevertheless, this birthday event invitation template would most likely make a great invitation for a children’s birthday party. 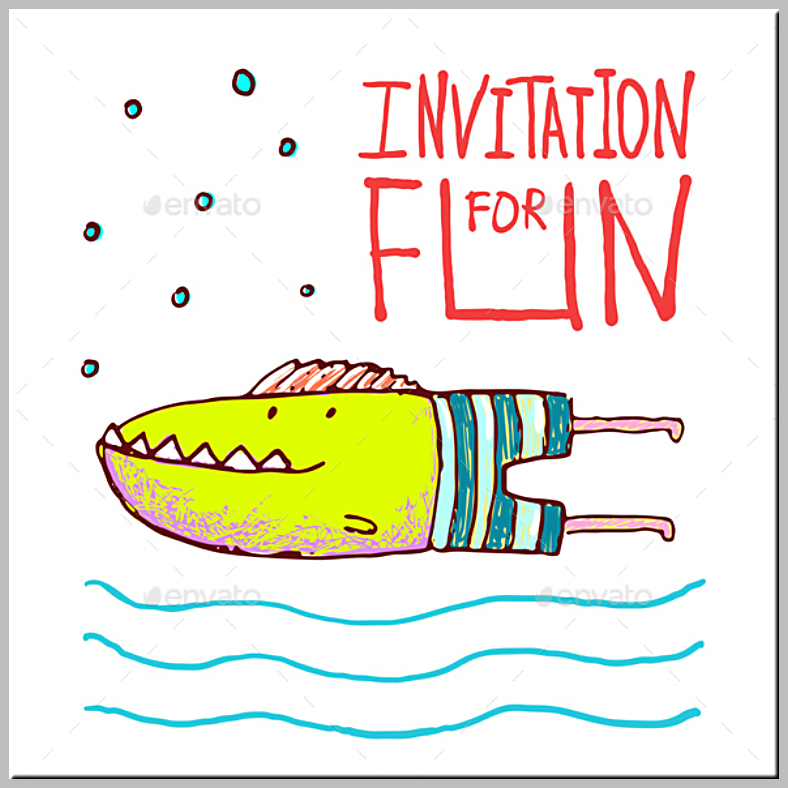 Have you ever seen a fish with legs and wearing beach shorts? No? Me neither. And that outrageous thought is what makes the illustration on the template above rather hilarious. Whoever said that event invitation should always be serious and formal? Maybe for formal events, but for others, you are allowed to incorporate humor into the design, and the template above is a good example of an invitation that is sure to draw a lot of laughs.

Have you ever seen the film Monsters, Inc.? If you liked the characters James “Sulley” P. Sullivan and Mike, then you will most likely love what the template above has for you. It actually has the best of both of them, mainly the color and fuzziness of Sulley and the facial features of Mike. If you’re planning on throwing a monster-themed children’s birthday party, then the template above would be an awesome choice. 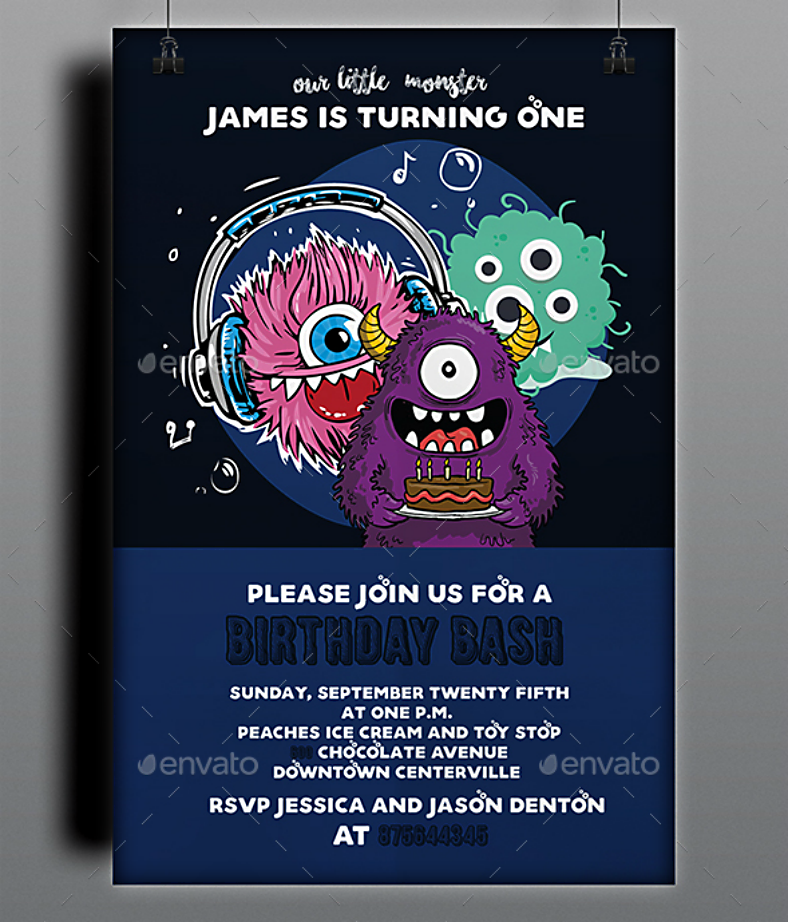 Look at all the fluffy monsters on this template! Don’t be scared, they won’t hurt you, they just want to greet you a happy birthday, and they even brought you a birthday cake. Also, these monsters are very willing to help you in gathering attendees for your birthday party, so download this birthday invitation template to let them do what they want to do. 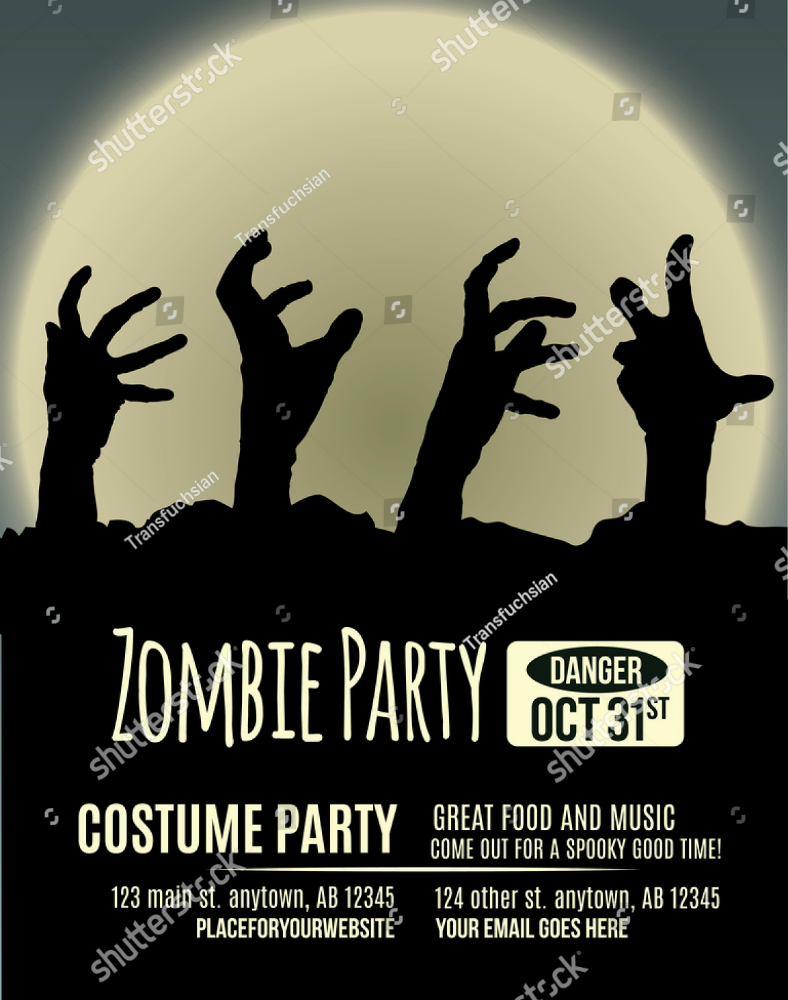 If you are looking for something that’s more on the spooky than cute, then the template above may be able to provide you with the goosebumps that you want. It just goes to show that even the most minimalist of designs can still get a little scary, considering that this template only features silhouettes of zombie hands reaching out from the ground. However, this is not something that we haven’t seen before, this has already been used in a lot of zombie flicks, which is why we can very much relate to its scare factors. 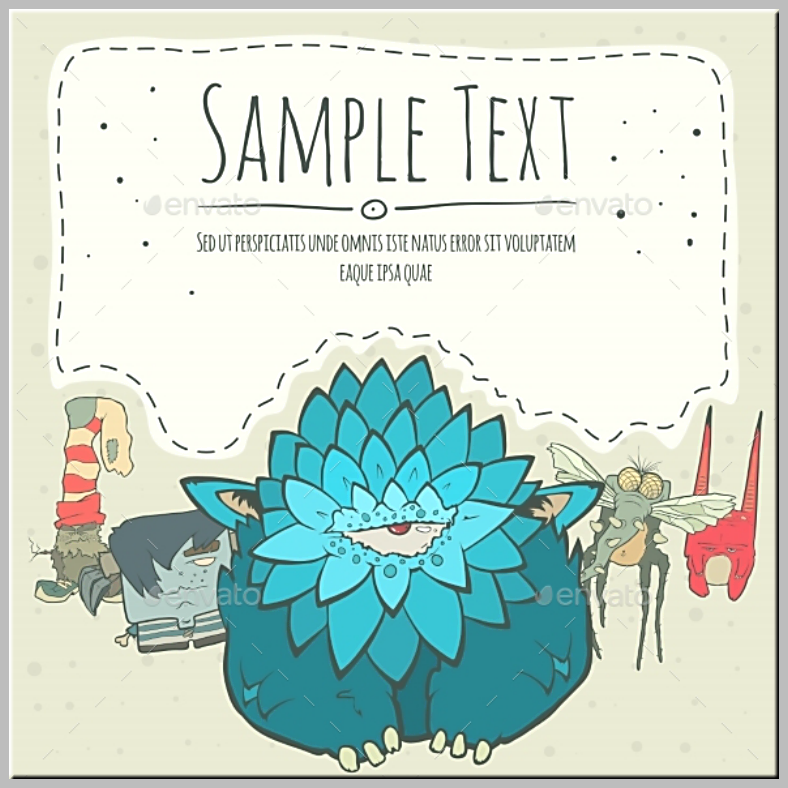 They may be grumpy-looking, but believe us when we say that they are there to wish you a happy birthday. And just like the previous template that we have shown you, these monsters also want you to have a great time on your birthday, and they want to help out in inviting guests to your party. So let them, don’t let their seemingly grumpy appearances let you think otherwise.

Earlier, we were able to show you a template that had elements which resemble pen drawings. This time around, we will be showing you a template that features text that appear to have been written using a chalk. The chalkboard birthday invitation template above is absolutely perfect for making invitations for children’s parties and events, and for sure, the kids will love the cute little monsters on the design. 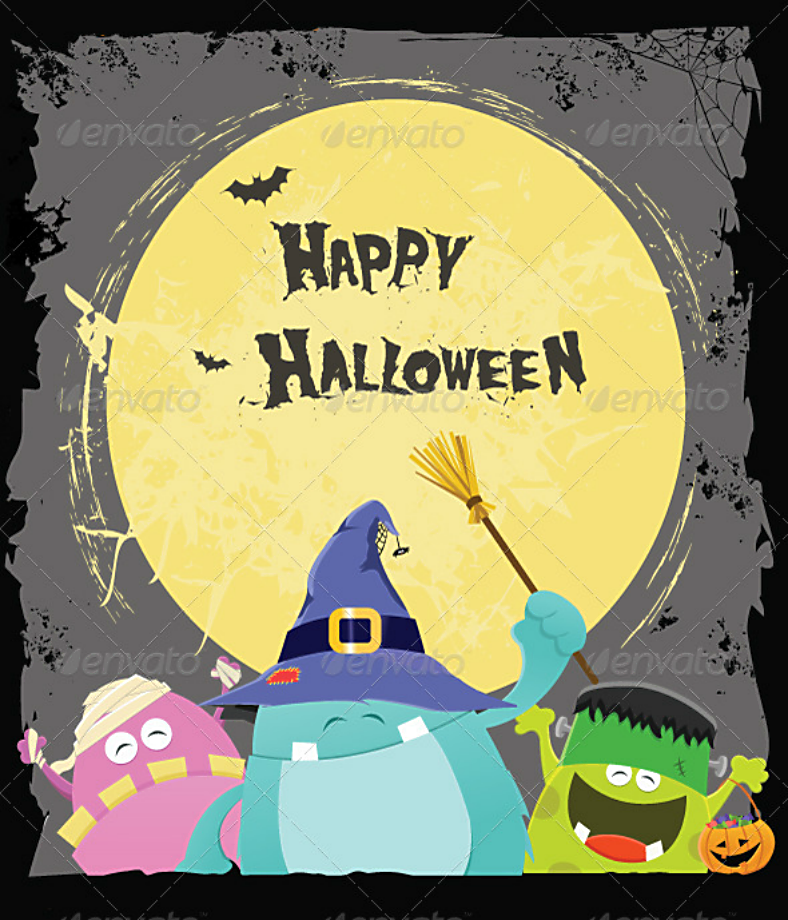 A monster dressed up as another monster? Seems too over the top, but the monsters on this Halloween invitation template seemed to have pulled it off. But no matter how much effort they’re putting to make themselves look scary, they still look as adorable as they really are, which is why this template is great for making trick or treat parties for children.

Yes, the big blue monster may have a very big mouth, but unlike the big bad wolf, he’s not going to use it for eating you (he’s probably vegetarian), he’s going to use it for singing a happy birthday song to you. For this birthday invitation template, the entire design consists of a stretched out face of the blue monster, and the texts are scattered all over his face, and inside his mouth as well. Download and use this template if you wish to surprise your friends, family, and relatives with an unexpected visitor who simply wants to invite them to the birthday party. 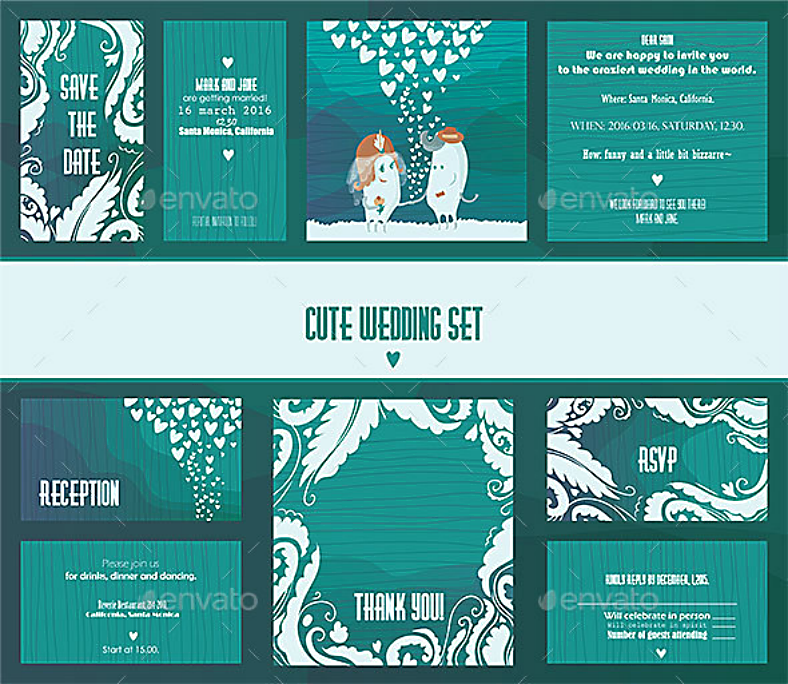 When putting together a wedding, one of the most tedious parts would probably be designing the invitations and the other necessary cards. Many find this task stressful because they will need to match or at least coordinate the designs of the different cards (invitation card, RSVP card, thank you card). However, there is an easy way around this issue, and it is to use a bundle of designs or templates such as the one shown above. With bundles, you can focus more on the editing phase than to spend a lot of time searching for individual templates, but then again, you should also be aware of the five mistakes to avoid when writing wedding invitations. 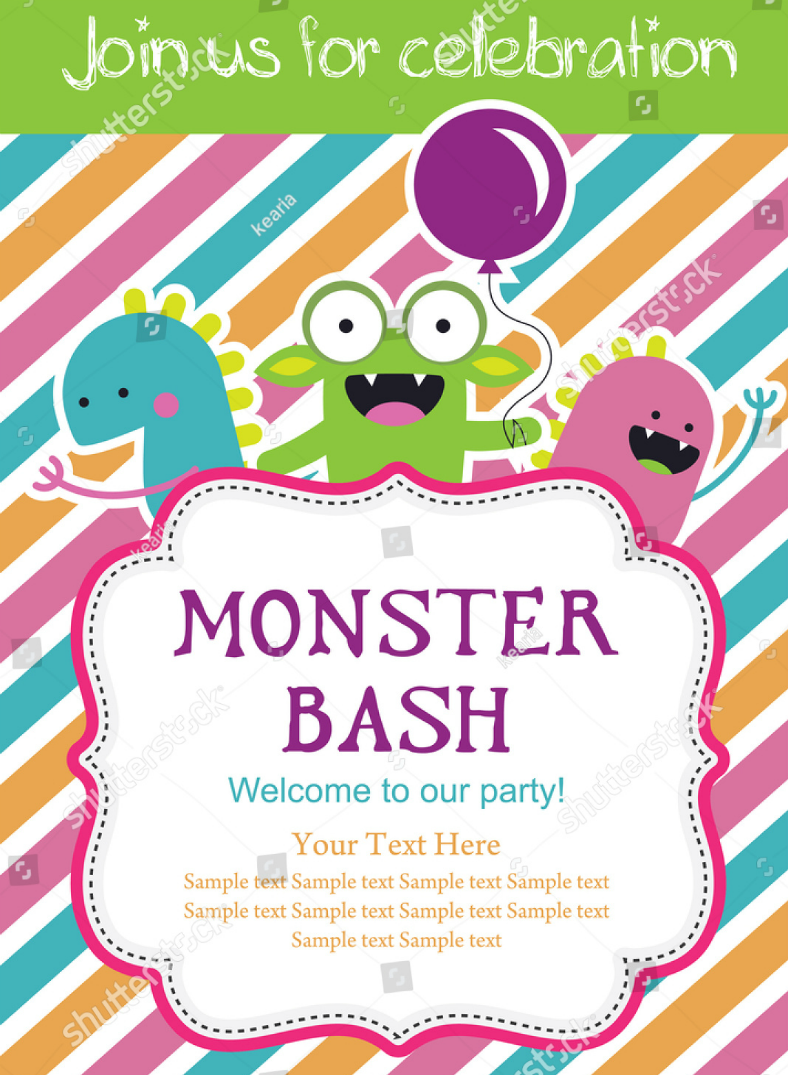 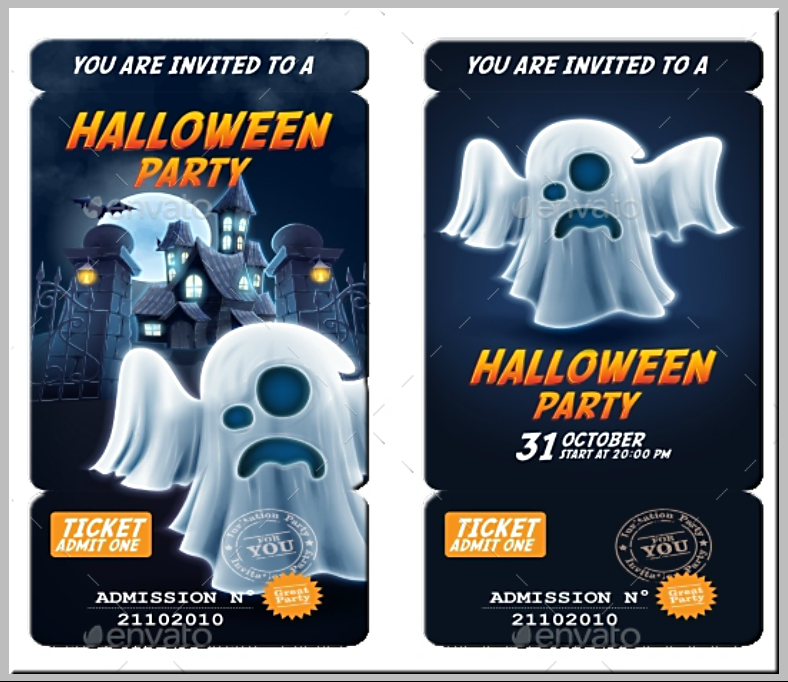 Ghosts! Yes, we are all scared of them, after all the horror movies that featured meanies that can not be seen by the naked eye. But then again, there are also friendly ghosts, such as the one featured on the template above. The ghost on this design is unlike those in movies that try to drive away people, this one is actually inviting you to come over for Halloween. So, if you’ve got no other plans for that night, then why would you say no to the friendly ghost’s invitation? You may also see Halloween birthday invitation templates. 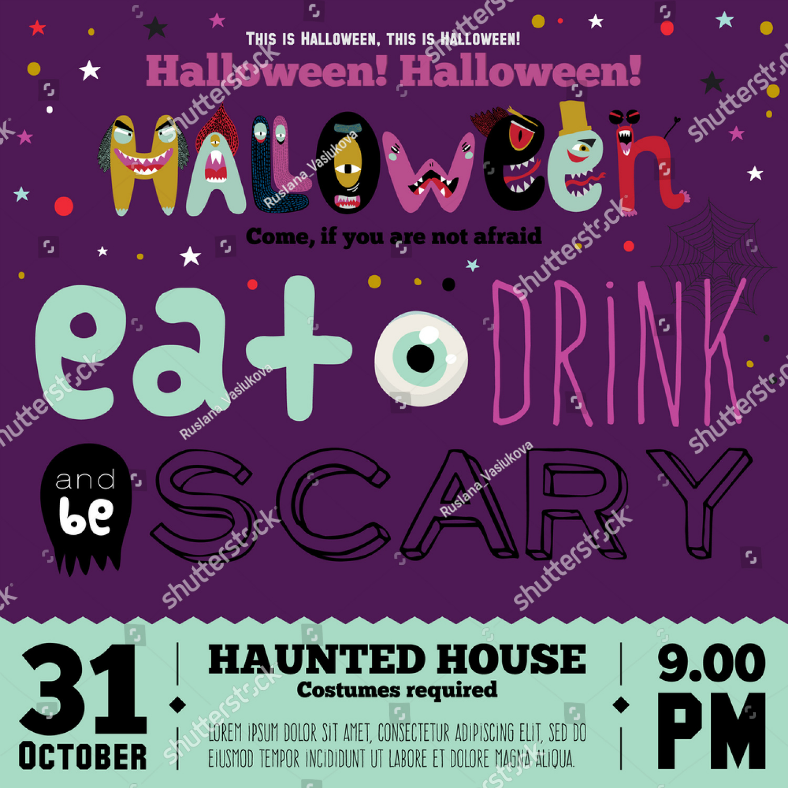 Check out the uniquely-designed monster invitation template above, the letters are made to look like monsters (or it could also be that the monsters are made to look like sample letters), and this effectively adds to the creativity of this template. The design on this template may seem straightforward, but the unique choice of font is already enough to make this both informative and visually appealing. We guarantee that this invitation template will definitely capture people’s attentions, especially from the fact that there is an eyeball in the middle of the design that’s staring right back at them. If you liked the color scheme used on the template above, then you may also like our collection of purple invitation templates. 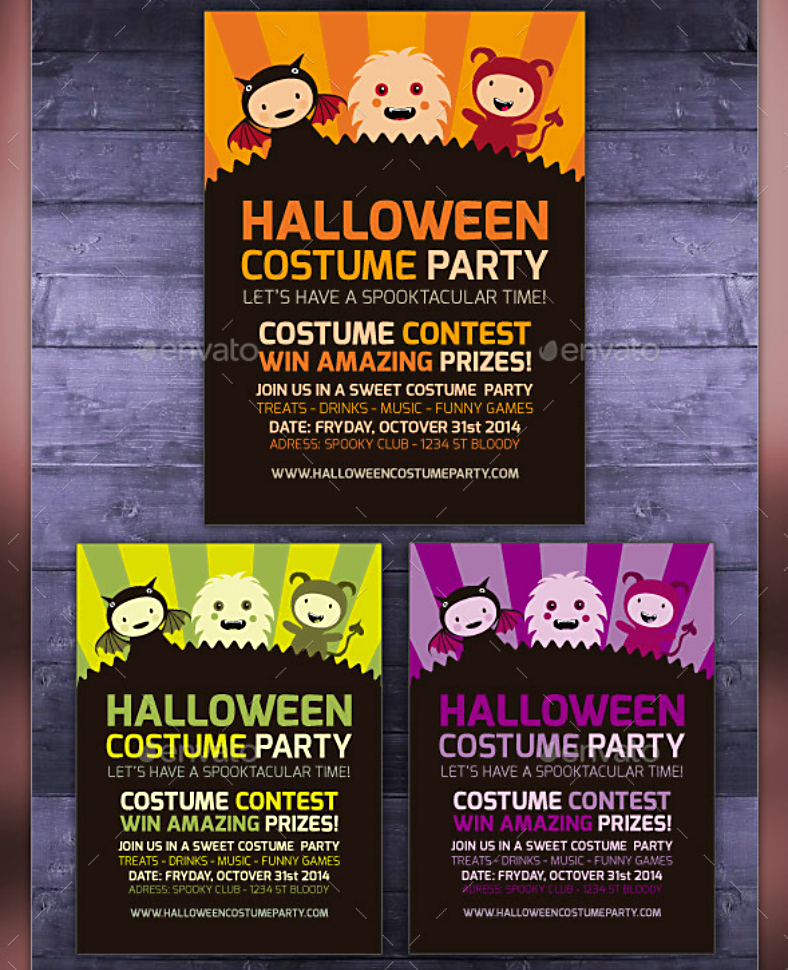 The Halloween may seem to be all about spooky themes, but when we actually try to think about it, the age group that commonly celebrates Halloween is mostly comprised of children. Since that’s the case, then it would probably be best to host a Halloween costume party that caters mostly to children, and we may just have the invitation template for that kind of party. Check out the template above, if that is what you are looking for, then don’t hesitate to download it. 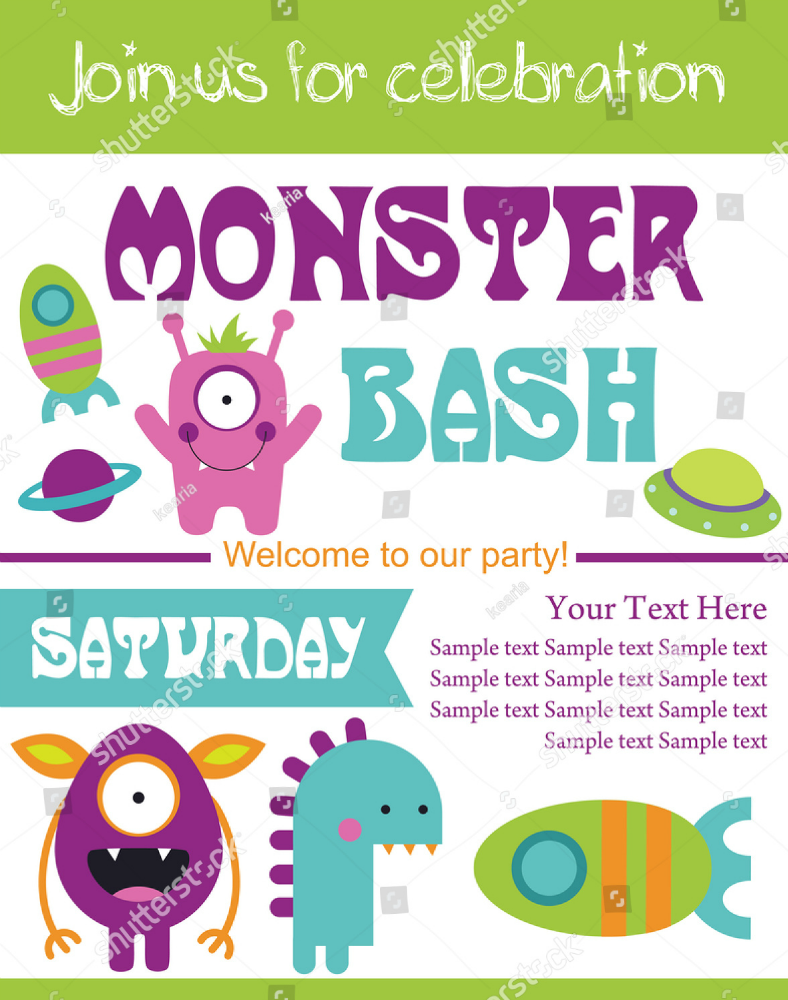 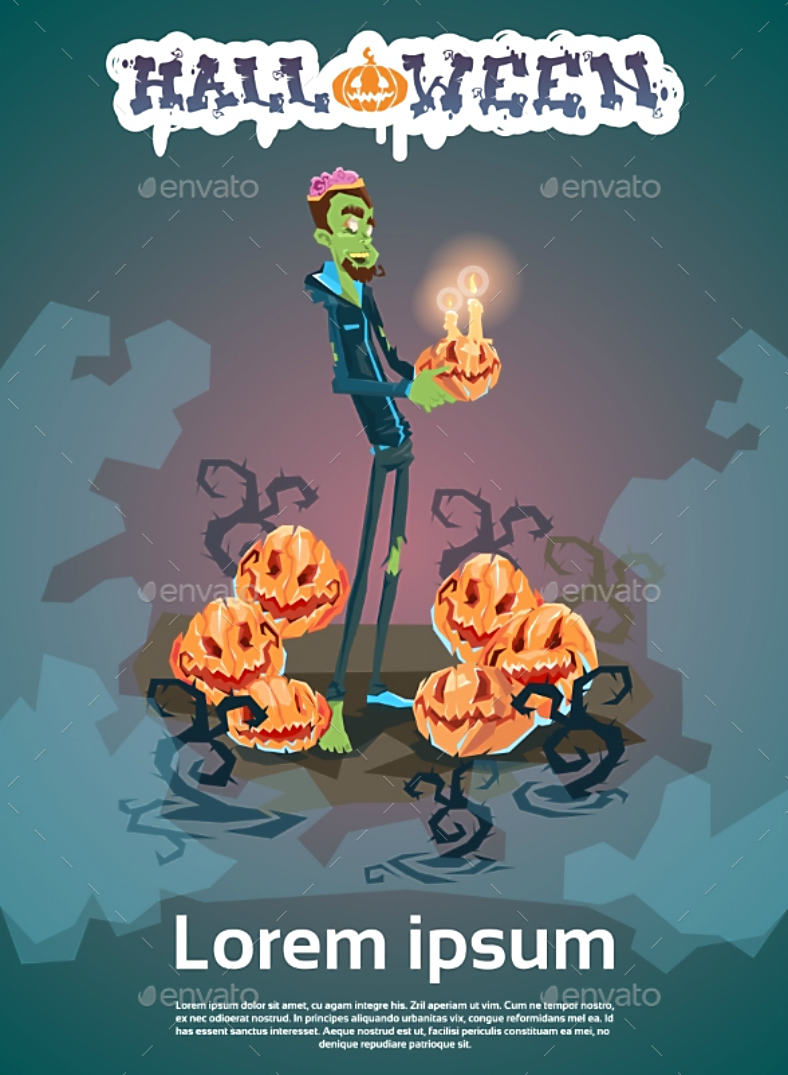 According to the media, literature, and even video games, zombies are mindless undead monsters who walk around the earth simply to satisfy their most basic of needs, which is to feed on brains. But is that really what they are? Has anybody really seen a zombie? You may want to move on from that belief and look at zombies the same way as we look at other people. Check out the party invitation template above, which shows a zombie surrounded by pumpkins. He’s not after your brain, he’s simply decorating the place to prepare for the coming Halloween. 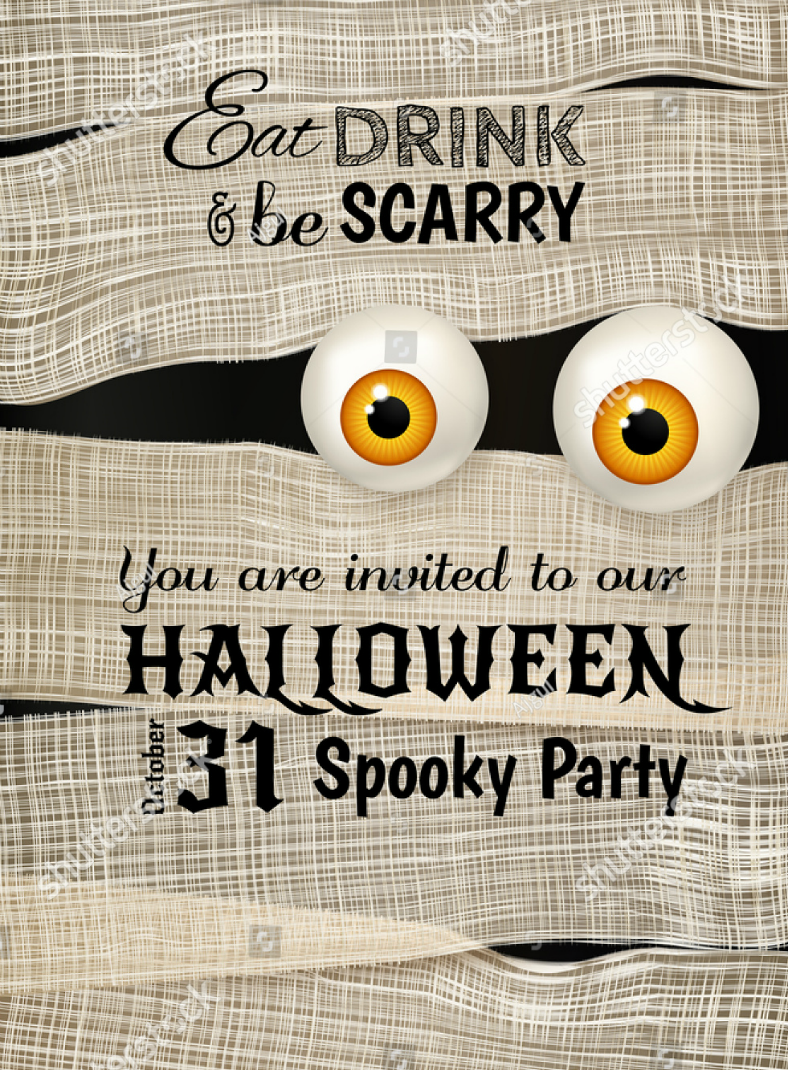 Look who’s peeking out from their bandage wrap? It’s no other than our friendly neighborhood mummy! While he may not always be an invited guest because he’s been depicted as the “bad guy” in the movies, but he really just wants to party and eat some candy. So if you’re planning to host a Halloween party, invite them over, and place an image of them on your party invitation design. Who knows? They might easily get along with everyone, most especially the guest who’s also dressed up as a mummy.

Were you entertained by our monster-rific invitation templates? Or were you scared of them? And I mean that in a good way. We hope you did and we also hope that you have realized that you can hardly find template like these anywhere else. What do we actually mean by that? You’ll find out below. You may also see email birthday invitation templates.

These invitation design templates have been gathered from various reliable sources that offer many kinds of templates, and these were made by some of this generation’s most talented and most imaginative graphic artists. With these templates, you can already assure yourself that you will indeed get your money’s worth if you choose to download from this collection.

But there is more to these templates than meets the eye, and that’s where editability is being measured. When it comes to templates, it is very important that nothing will hold you back during the editing process. Thankfully, our invitation templates will allow you to make as much changes as you need, all while keeping the quality outstandingly sharp. What more do you need to know? If you already know how to design party invitations, then download your own monster invitation template now.