What could possibly be more exciting than finding out someone you know is getting married? The family, relatives, and friends will all be so stoked, you can’t tell which of them is more thrilled and looking forward to the event. But for one thing, the appointed maid of honor has some responsibilities to take care of before the wedding day since they are usually tasked with planning for the bride’s shower party.

Bridal showers are just like any other party, the difference with this one is that they occur only once for every woman—considering that they only get married once. Because bridal showers—and wedding—happen only once, it is very important to make the most out of it. When planning for a bridal shower, it is best to match its theme with that of the wedding, meaning if the wedding is going to be rustic-themed, the bridal shower should at least follow suit.

If so, then you have definitely found the right place. Below is a collection of bridal shower invitation designs and templates that are all downloadable, and the best thing about them is that they are all rustic-themed. If you’re already excited about the wedding and are also looking forward to throwing a bridal shower, feel free to download and use any of our event invitation card templates. 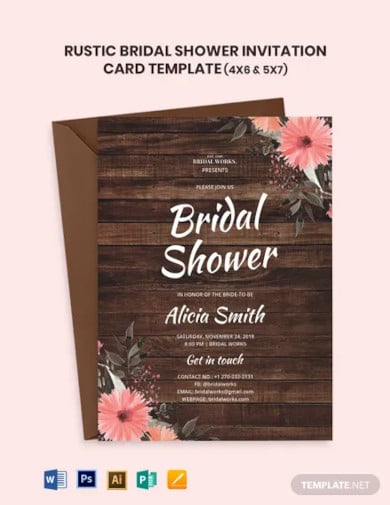 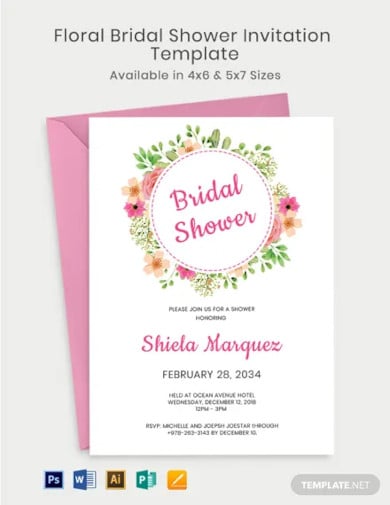 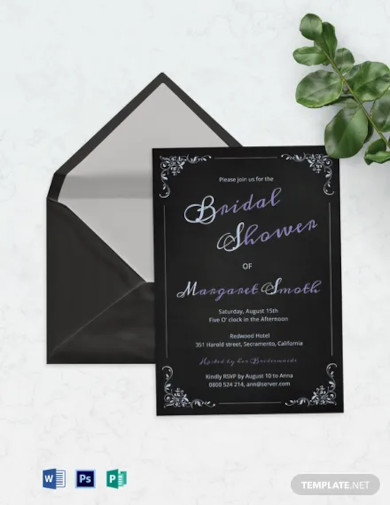 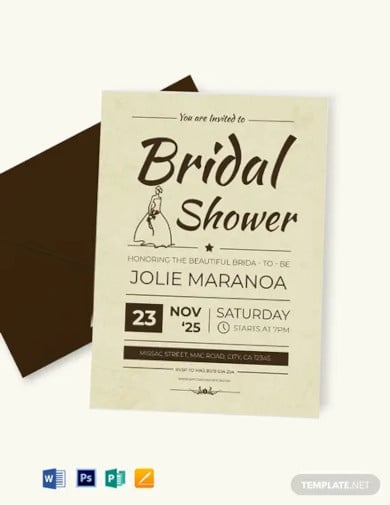 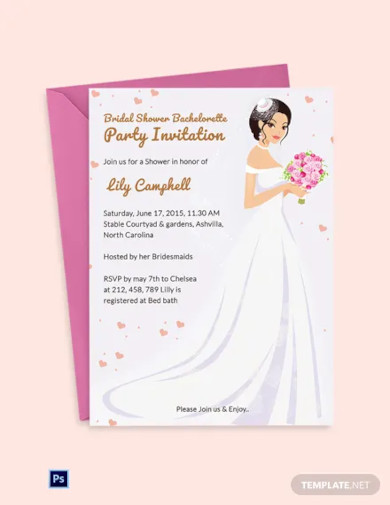 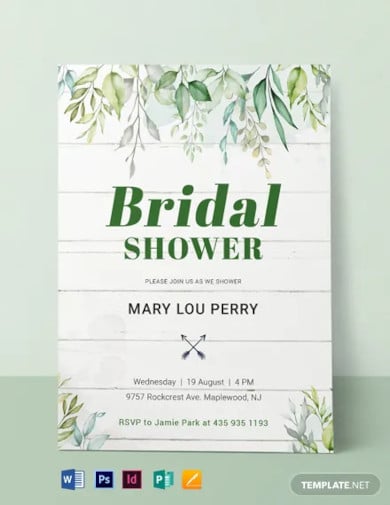 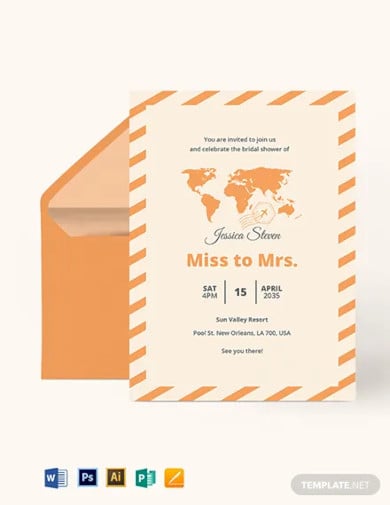 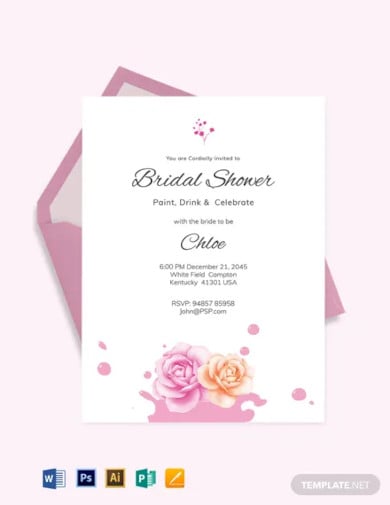 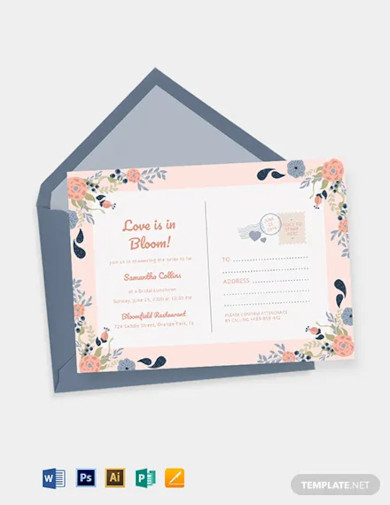 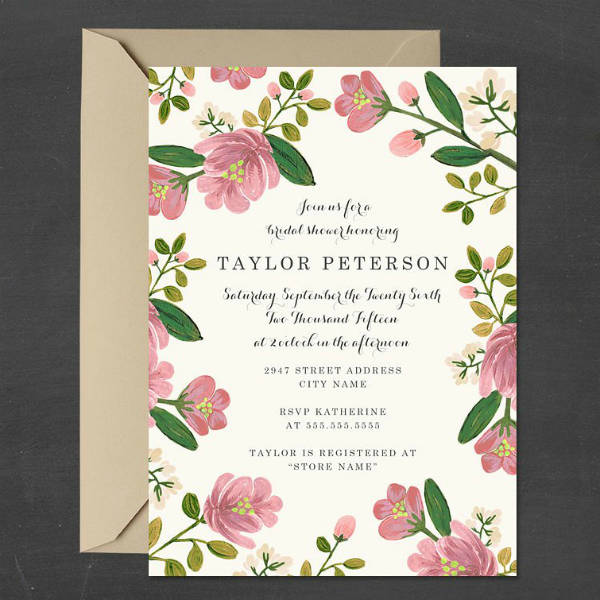 The bridal bouquet is considered as one of the bride’s essential accessories as they walk down the aisle, and this has its origins as well. For the event invitation template above, the entire design is surrounded by various illustrations of flower element which add to its overall beauty. 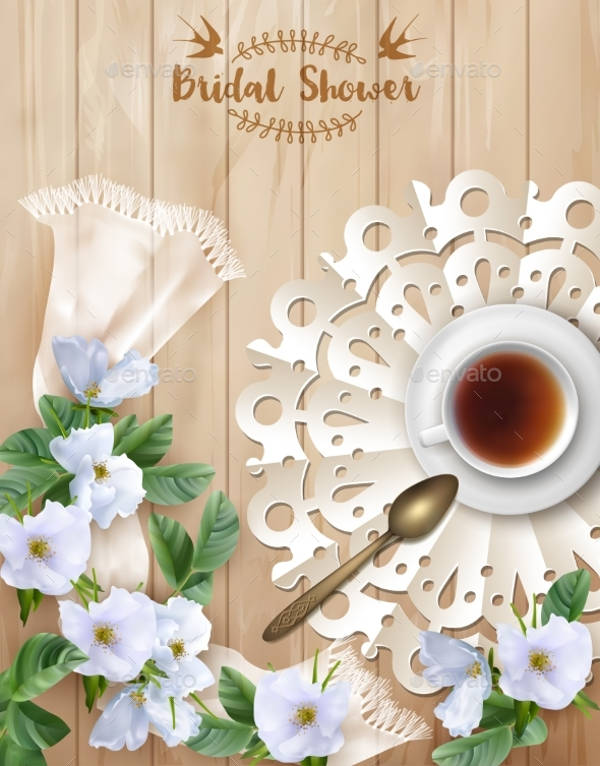 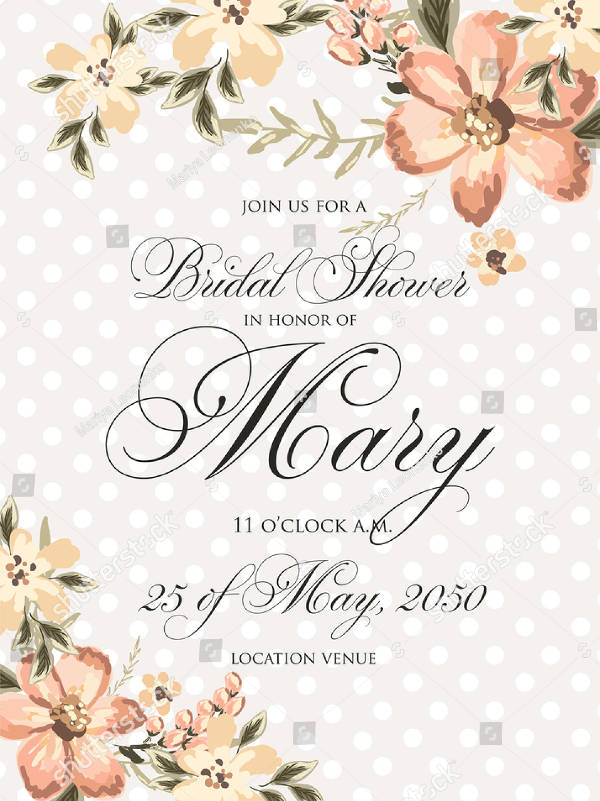 What Are the Origins of Throwing Bridal Showers?

In the past—particularly during the 16th century—the dowry system was practiced by many people during the couple’s marriage announcement. To those who are not familiar with the dowry system, we will be discussing that below, but for now, let’s focus on discussing how bridal showers came about. Bridal showers were adapted as an alternative to the dowry if the bride was unable to provide one for the groom, or if the latter’s father insisted not to accept a dowry from his son’s soon-to-be wife.

In other beliefs, the reason why bridal showers began was that of those instances wherein a wealthy woman fell in with a boy who was below her class. Because of her family’s disapproval, they would threaten to withhold her dowry if she would not marry someone who is also wealthy. Because of this, the friends would buy gifts and give them to the bride in lieu of the dowry. Touched by the friend’s efforts, the father eventually agreed to the wedding. You may also see bridal shower invitations.

But there is also an origin to the use of the term shower. According to historians, upper-class women would throw parties in order to celebrate woman’s last few days of being single by exchanging gifts, feasting on food, and sharing thoughts on the soon-to-be-wedded woman’s new role. During these celebrations, the guests would place small gifts inside a paper container and shower them over the bride-to-be. Over the next few years, the gifts given during bridal showers became more and more practical, specifically goods that can be used at home. You may also see printable bridal shower invitations. 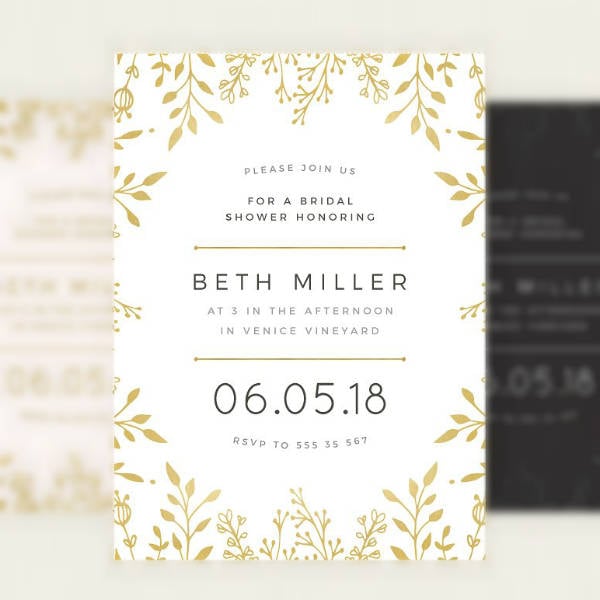 If you’d rather go minimalist but still keep the rustic theme, then you might want to use the elegant leaves invitation template above. The design on this template makes use of a lot of white space and is decorated with gold-colored botanical illustrations. 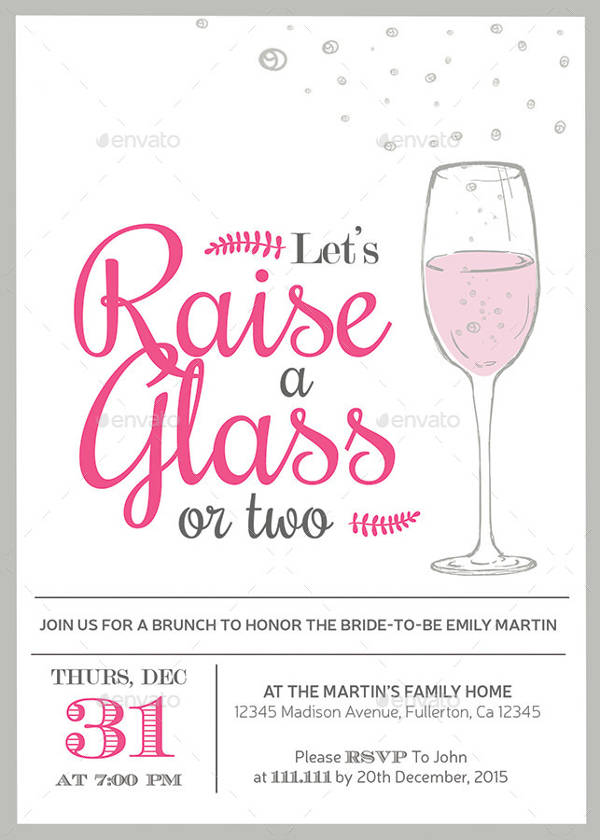 Proposing a toast is usually done to wish someone a happy and successful future, and you can notice this during wedding receptions. However, a toast can actually be done at any formal occasion, and bridal showers are one of them. For those who wish to throw a more formal bridal shower event, then the printable invitation template above may be an ideal choice.

What Is the Dowry System?

The dowry system is a custom that was practiced worldwide when a marriage is announced between couples. This custom was very common during the ancient times, but some cultures still practice it up to this day particularly in Asia, Africa, and some parts of Europe. The dowry involved giving something to the woman’s family (specifically the father) in exchange for her hand in marriage. The gift given may either be in cash, in kind, or something valuable that can be sold. You may also see bridal shower invitation banners.

During the wedding ceremony, once the bride has been passed from the her family to the groom, it signifies that the dowry has been acknowledged and that the negotiations have been successful. Back in the days, the greater the amount or value of the dowry, the higher the likeliness that the couple will get married. Oftentimes, men would consider getting married simply on the size of the dowry, and they would take advantage of this in order to build wealth for their own families. 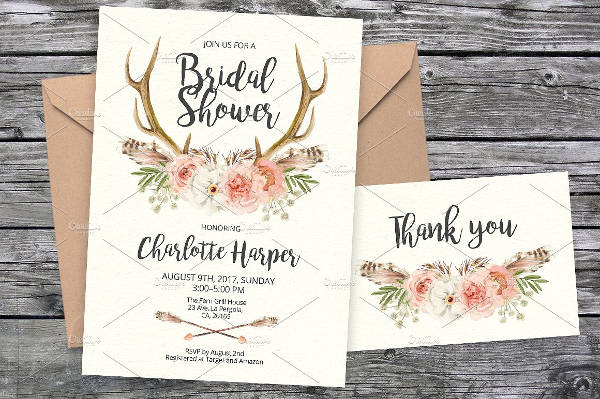 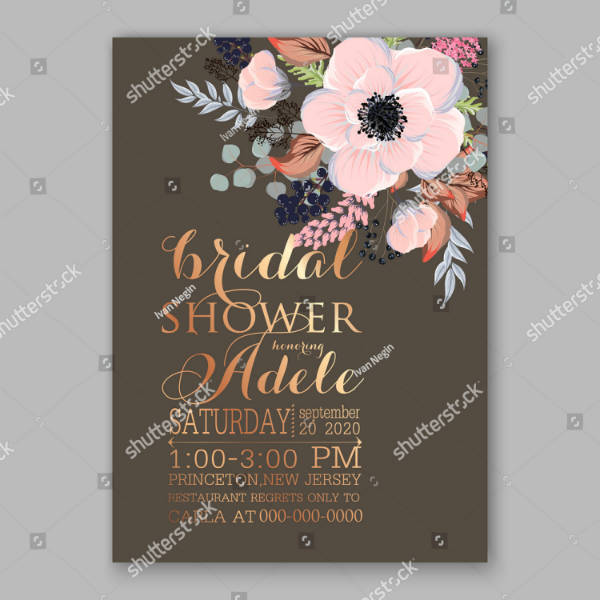 Guidelines When Planning to Throw a Bridal Shower

1. Who Should Throw the Bridal Shower?

2. Where Should Bridal Showers Take Place?

Bridal shower celebrations can be held anywhere, restaurants, dance clubs, beaches, or even at the convenience of the bride’s own home. The host of the party should be the one to decide where the bridal shower will be held, and should coordinate with the venue as early as possible. If the party is going to be held at a restaurant or someplace that requires reservations, then the host should take charge in doing so. If it is going to be held in a public location—such as parks or beaches—then the venue should be prepared by decorating it appropriately. But if the party is to be held in a house, the host should inform the owner with regards to the plan, and at the same time, put up decorations as well. You may also see bridal shower invitations.

3. Who Should be Invited to the Bridal Shower?

If we try to look at the more traditional way of throwing bridal showers, the guests should only consist of female friends and relatives, and that no men are allowed to join. Nowadays, men can also be invited to attend bridal showers, but it needs to be indicated on the invitation cards. It will be solely up to the host whether or not they would want to invite men to come to the bridal shower. Otherwise, they should coordinate with the best man or someone from the groom’s party to throw a similar type of party in honor of the groom. Additionally, if the host of the event wishes to keep the bridal shower intimate, then they can always refer to the guest list for the names of the people that they would like to invite.

4. When to Throw the Bridal Shower?

Bridal showers can be thrown anytime between six months to three days before the wedding day, but it is often advised to have it held closer to the wedding day to give those who need time to travel the chance to attend. Commonly, bridal showers are held at dinnertime, but it can actually be held at any time of the day. If the host prefers to have it during lunch time, she may do so, but it is very important to take into consideration the convenience of the invited guests. You may also see beautiful bridal invitations. 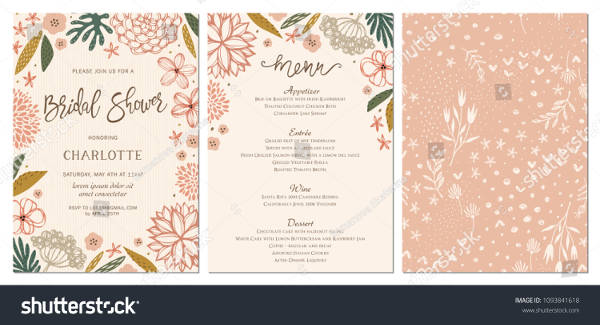 What Are the Characteristics of Rustic Designs?

When we hear the word “rustic”, we can easily associate it with interior designs, and is described as emphasizing the rugged and natural beauty of the overall design. The same thing can be said when it comes to graphic designs, the entire look is inspired by nature.

Oftentimes, rustic designs are minimal and its beauty is derived mostly from its use of organic-inspired colors and textures. With regards to the colors, the ones commonly used are those that are earthy such as brown and green, but in different shades. And for the texture, they are mostly inspired by wooden surfaces, but others usually make use of abstract patterns and lines.