Recipes are the instruction manual of the kitchen. If one is planning to cook or bake something, especially if it is a culinary dish, they would do well with following a recipe. This recipe can be handed down from generation to generation or buying a cookbook written by some famous people like that of Martha Stewart or Gordon Ramsay. Sometimes, recipes can be found along the packaging of the ingredients bought or through the television and the Internet. You can also read blank recipe templates. 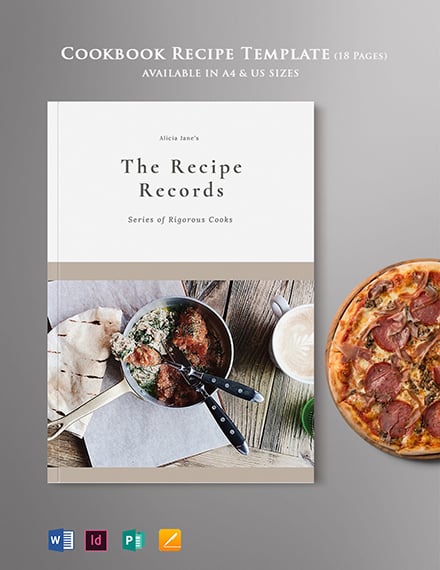 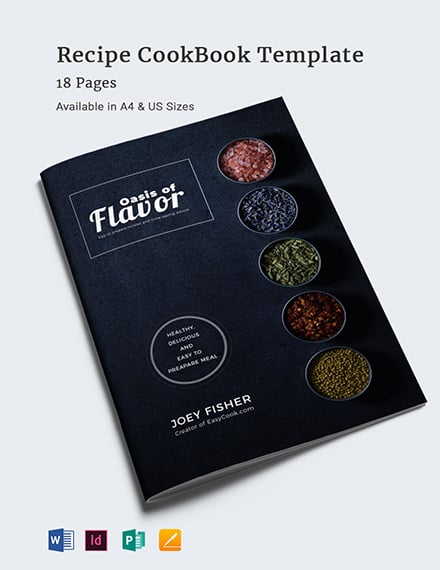 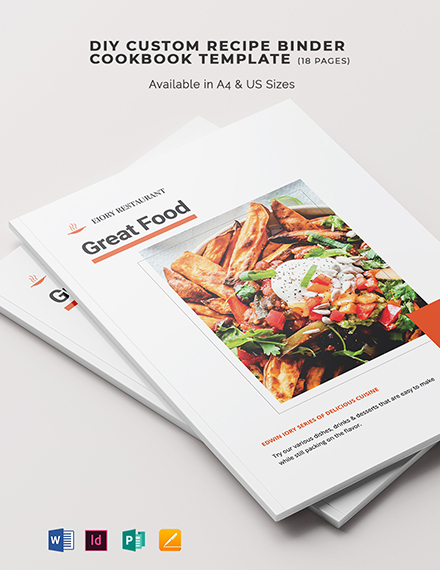 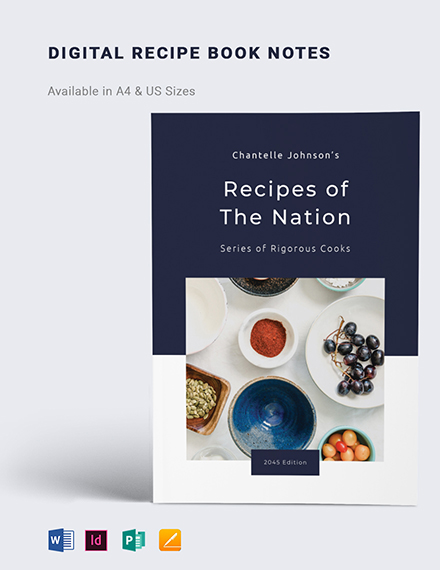 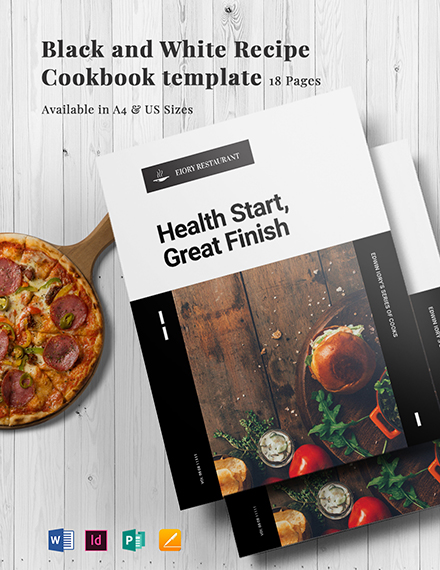 Recipes can be collected and collated into one publication. Such a publication is called a cookbook. Recipes in cookbooks can be organized in different ways: by course (appetizer, first course, main course, dessert), by primary ingredient, by cooking technique (boiling, grilling, frying, etc.), alphabetically, by origin country or region. Cookbooks can also carry an illustration of finished dishes. Preparation steps, discussions of cooking techniques, advice on kitchen equipment, ingredients, possible substitutions to those ingredients, historical and cultural notes and so on. You can also like sample recipe book templates. 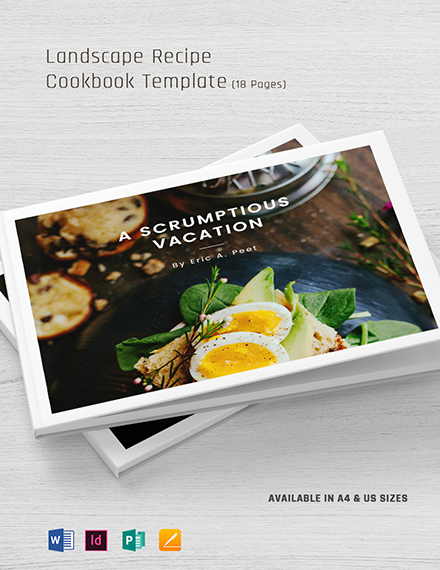 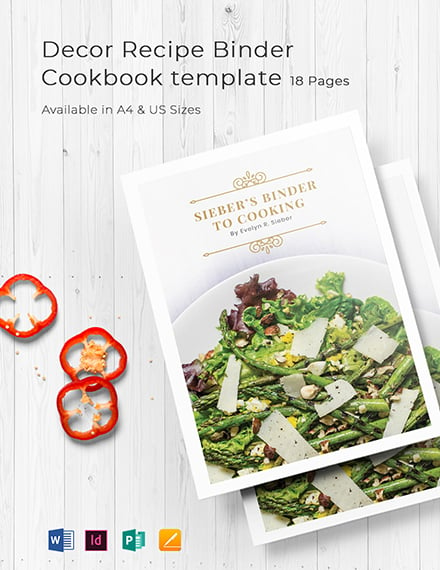 Most cookbooks are published like a proper book, either hardcover or paperback. However, they are not limited to that. Cookbooks can also be published by way of a catalog. Recipe cookbook catalogs are more often than not published and given away along with the ingredients that are relevant to the said recipe. You can also see PSD catalogue templates. 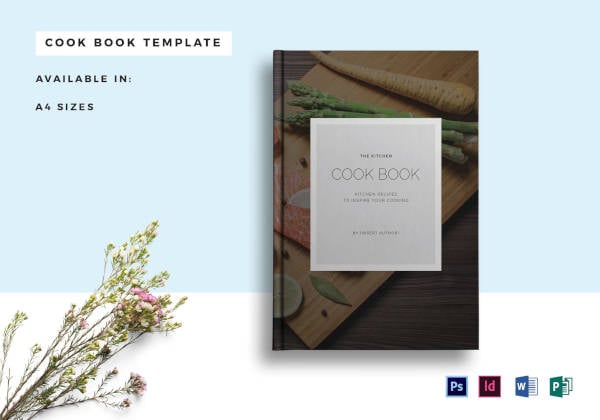 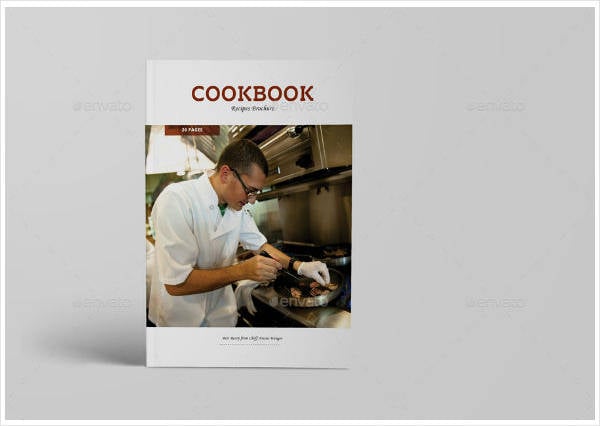 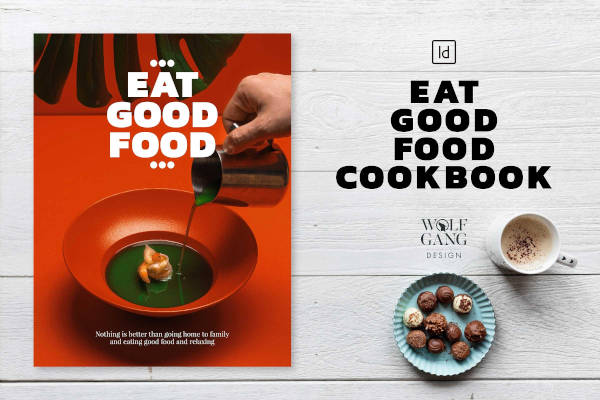 Catalogs can mean different things in different fields. Even then, it still means many different things in business. It can mean as mail order. It can refer to a parts book which is a book published by a manufacturer, containing the part numbers of their products. It can also mean as a way to show the retail product offerings of an online shopping service. However, for the purposes of the recipe cookbook, the trade literature, specifically the trade catalog, is our main concern. You can also read word recipe templates. 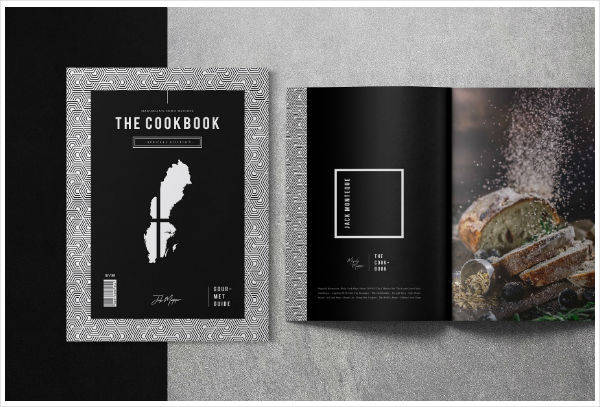 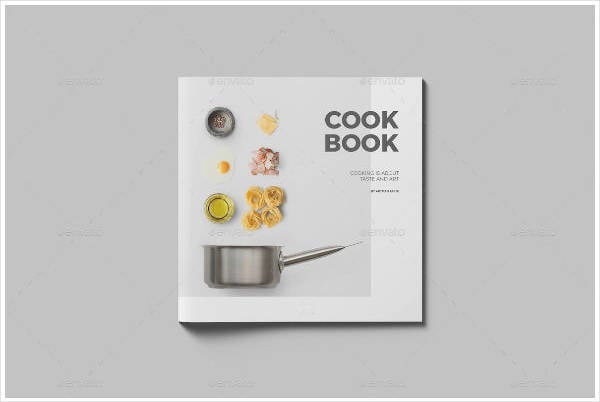 Trade literature is a general term that includes advertising, customer technical communications, and catalogs. The definition of the term “trade catalog” can vary. Generally, however, trade catalogs are printed materials published by manufacturing, wholesaling, or retailing companies. You can also read book templates.

They are basically promotional materials that make advertising claims, give instructions for using these products, give testimonials from customers. They can even include detailed descriptions of sale products. Recipes are perfectly content to include in a trade catalog especially if that catalog aims to sell a food product or ingredient.

Parts of a Recipe

At first, glance, writing a recipe could be an easy task, which is partly true if one knows what they are doing. However, it could be pretty daunting if one does not know where to begin. It is especially daunting if one does not have an ounce of idea on what to include. As such, it is important to know the parts of a recipe in order to get a footing of where to set about. You can also see catalog layout templates.

The yield indicates the number or size of servings the written recipe will make. Having a knowledge of how much the recipe’s yield in advance helps one to know whether more or less food is needed. It also can tell the people following the recipe of whether or not to make more or less food. You may also see beautiful cookbook templates.

Of course, one cannot begin to cook if one does not have the ingredients. Therefore, this part is a no-brainer to include in your recipe. If the recipe being written is a trade catalog for an ingredient like canned pineapples, pancake flour or any other ingredients, it is important that the recipe indicates the brand of which. It is advised to write the ingredients in the order that they are used. This is to prevent leaving out any ingredients in your recipe. Ingredients should also be listed in the exact amount as needed with its specific form also stated. You can also see book layout templates.

3. Step by Step Directions for Mixing and Handling

The main purpose of the recipe is that it is a guide on how to use the ingredients to create delicious food. In its very essence, the recipe is that, an instruction. As such, it should include directions on how to prepare it. The steps should be listed in the order that they should be done. Numbering the steps is advised as the numbering can be easily followed and prevents steps from being skipped. The instructions can also be written in paragraph form, however, it should be carefully read to make sure that the recipe is followed to a T. You can also see free catalog templates.

Most recipes do not state all the necessary equipment. That being said, it is still a good idea to include specific equipment. This is important in order to for the readers to use the stated specific equipment so the food being cooked will not overflow or overcook. You can also see best eBook cover designs.

The proper temperature and time should be followed in order to bring the best of the recipe. Some recipes give you the exact cooking temperatures and times. Others will tell its readers specific instructions on how to cook the food. You can also see photo book cover designs.

This is an optional content that can be included in the nutritional analysis. This part is not necessary for preparing a recipe. However, this part can carry very useful information when planning foods to fit into a particular diet or meal plan. Some recipes usually include the number of calories and grams per serving of the various nutrients. 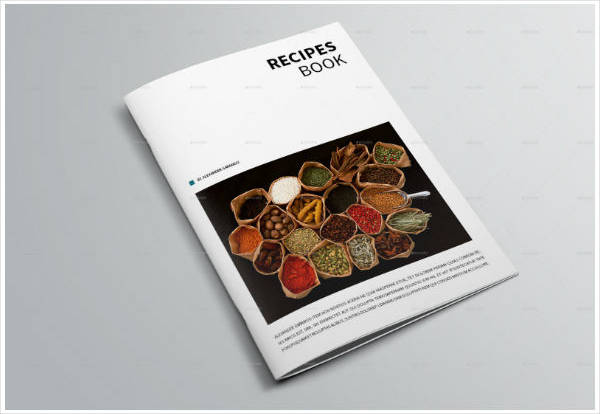 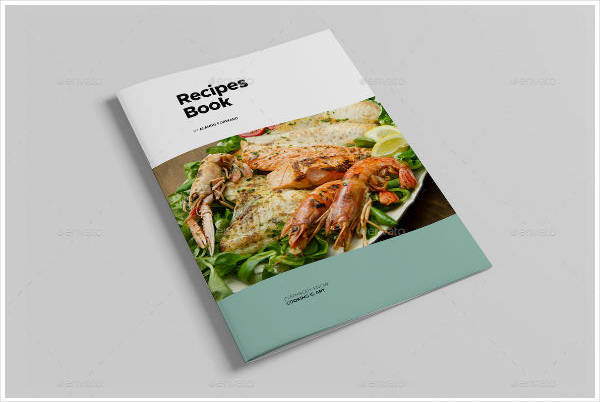 1. Ingredients should be listed in order of use, as described in the sequence of instructions.

2. The most important ingredients should be listed first if it can be consistent with the order of use.

3. Everything must be spelled out: tablespoons, teaspoons, ounces, and gallon.

4. Break up the ingredients list with heading if the recipe has different elements. Headings like “sauce” or “soup” can help readers which ingredients are to be used for which parts of the recipe. You can also like exhibition catalog examples.

5. List the ingredients in descending order according to volume when several ingredients are used at the same time. If there is an issue over preparation, list them in order. If you need to use both the zest and juice of a lemon, list the zest first and then the juice if that is the order needed to do the preparation. You may also see service catalog templates.

6. Do not use two numerals together. Use parenthesis to separate the two numerals if putting both beside each other is unavoidable. This usually comes up with the sizes of packages. You may also see restaurant catalog templates.

7. Capitalize the first letter of the ingredient if it starts with a letter instead of a number.

8. Place preparation techniques in the ingredients list if said technique is simple.

9. List the total amount of an ingredient if it is used more than once at the place in the ingredient list where it is first used. Add “divided”. In the instruction part of the recipe, indicate the amount at each step. You can also see InDesign templates. 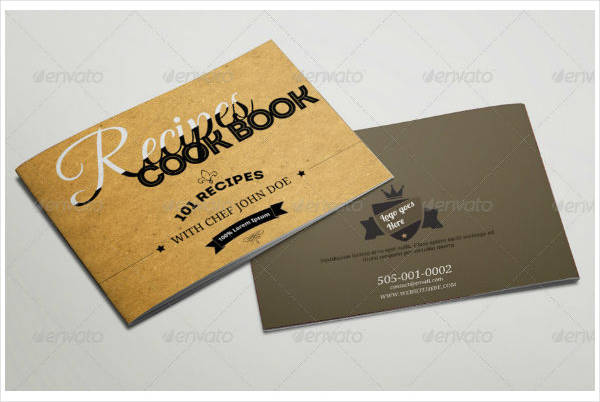 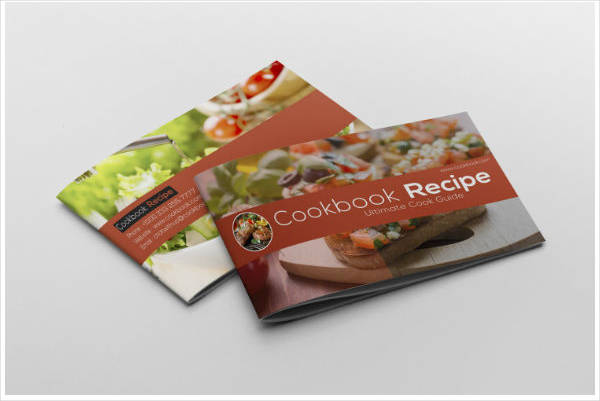 1. Indicate the size of bowls and cookware where it is helpful. Indicate in the recipe if a large mixing bowl or large pan is needed. You can also see children’s book templates.

2. Be as short and concise as possible. Recipes do not need to be written in complete sentences.

3. Indicate the level of heat for the instruction of the stove-top. Temperature and heat is an essential element in cooking. You may also see printable newspaper templates.

4. State exact or estimated cooking times. Include descriptive hints for doneness. Be clear as to help recipe readers avoid overcooking the recipe. You may also like product catalog templates.

5. As with the ingredients list, if the recipe involves different elements, separate out each element in the method.

6. Separate each step into a different paragraph. For example, if the dry ingredients are to be mixed in a bowl, use one paragraph for all the instructions of that step. You can also read business catalog templates.

7. Finish the recipe with instructions on how to plate the food, what temperature to serve it, and how to garnish.

8. Include in the last step instructions regarding storage if storage is applicable. Do not bother if said food cannot be stored. You may also see sales catalog templates. 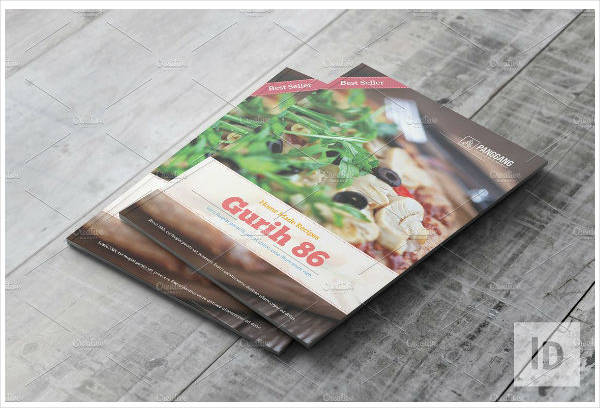 Recipe cookbook catalogs are some of the best ways to promote the sales of ingredients products. That being said, the recipes found in the catalogs should be tested to ensure that they work. Recipes should also be clearly written to make sure that the readers of said recipes can follow it well.

The parts of the recipe should be indicated clearly to avoid confusion. It the catalog is a collection of recipes, ala cookbook, the recipes should be grouped in a comprehensive manner so that readers can find which recipe in an easier manner. You can also see book templates.