A bill of lading is important as there are different kinds of items that get shipped across the world, from letters to large cargoes that weigh several tons. If you run a freight forwarder company or you need to ship something, then there are several kinds of bill of lading ideas and examples that are applicable for your everyday use.

Bill of Lading Ideas and Examples

A bill of lading or BOL is an essential document for shippers, freight forwarders, and carriers alike. Without this document, shipping items and cargoes won’t be possible. A BOL functions as a receipt, a contract, and a document of title of the goods that are to be shipped to their final destination.

To give you an idea of what a BOL document looks like or if you wish to create one as a shipper then make use of this generic bill of lading example. This template will help you generate the document you need and gives you an idea of what kind of information you need to prepare in order to complete the document. Make sure you’ve got every detail covered so your shipment gets processed without issues. 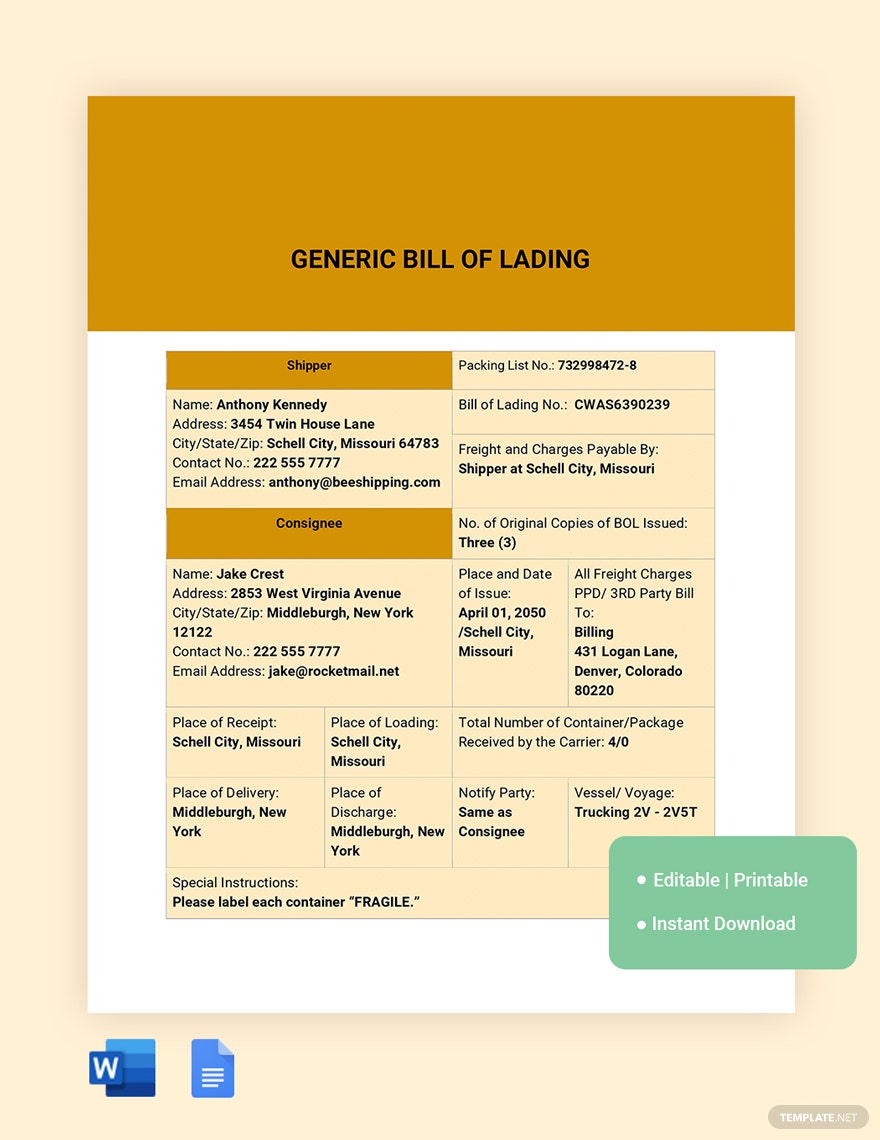 Another kind of BOL document is a straight bill of lading. This particular BOL is used when the goods are consigned directly to the buyer and is non-negotiable. If you need to prepare this document, our template is a great example you can use in order to fill up all the necessary details needed to proceed with the shipment. 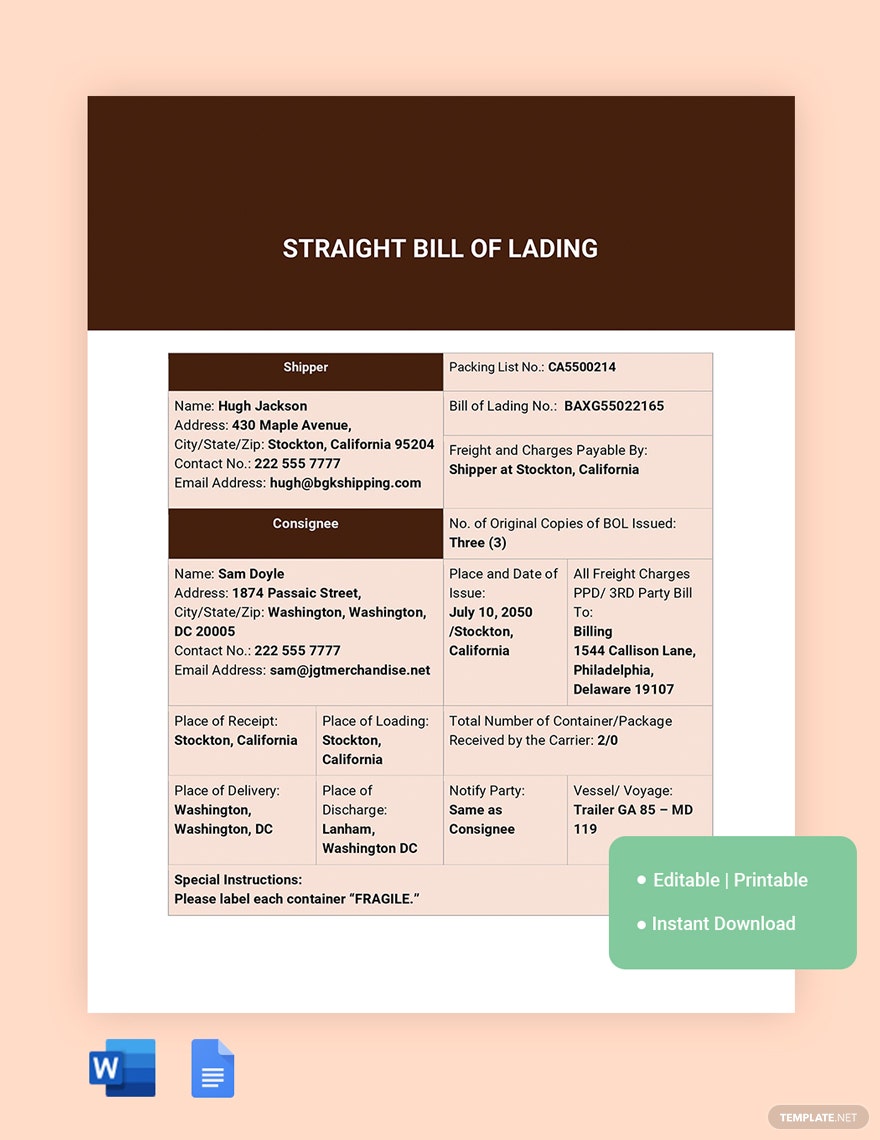 For transportation companies who make a living transferring goods across local and international borders, then a transportation bill of lading is one of the most important documents needed to complete the shipping process. The company is in charge of issuing this document, and so it is critical that every piece of information is written correctly. This would include the details of the shipper and consignee and the details of the cargo, such as its weight, quantity, and description. 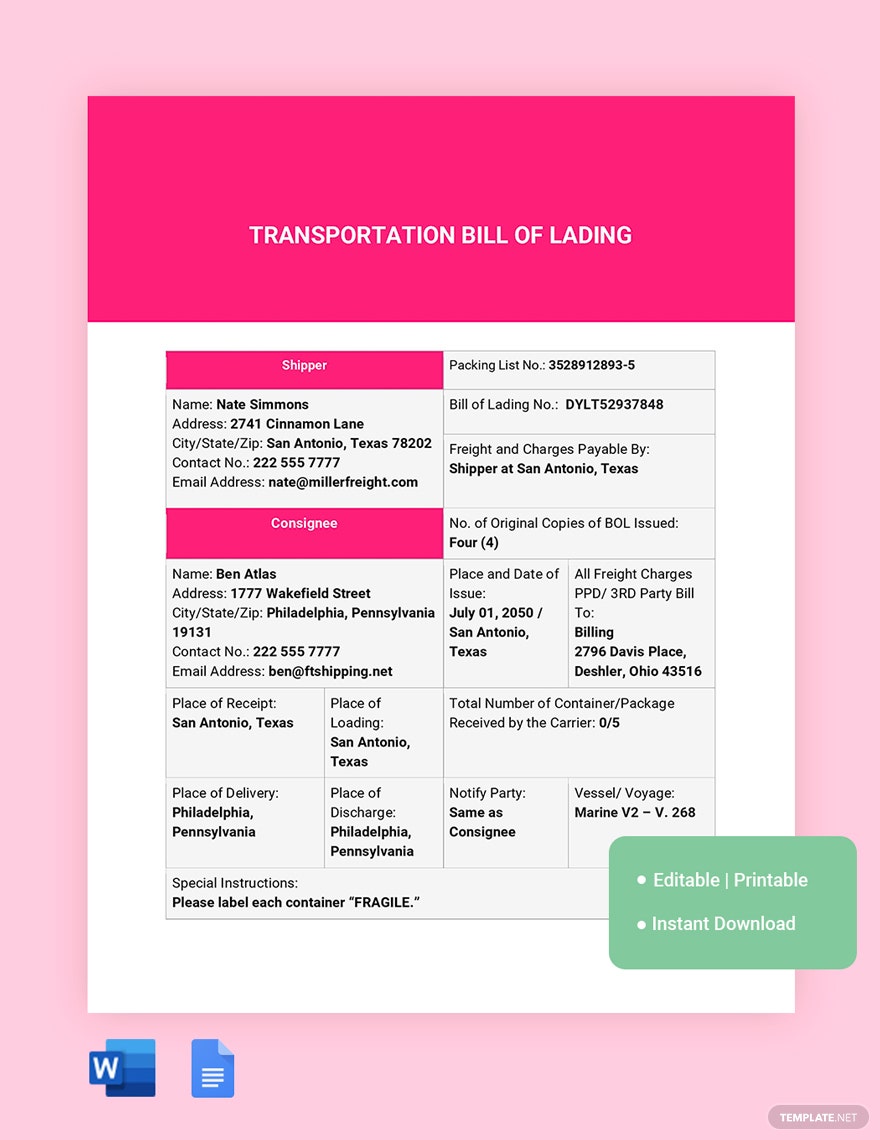 Transferring shipments as big as cars across borders can be quite complicated with several permits needed including a bill of lading document. This is used as an agreement between the driver and the shipping carrier and includes all necessary details to ensure that the car gets shipped. Make use of this car hauler bill of lading example to give you an idea of its layout and content. 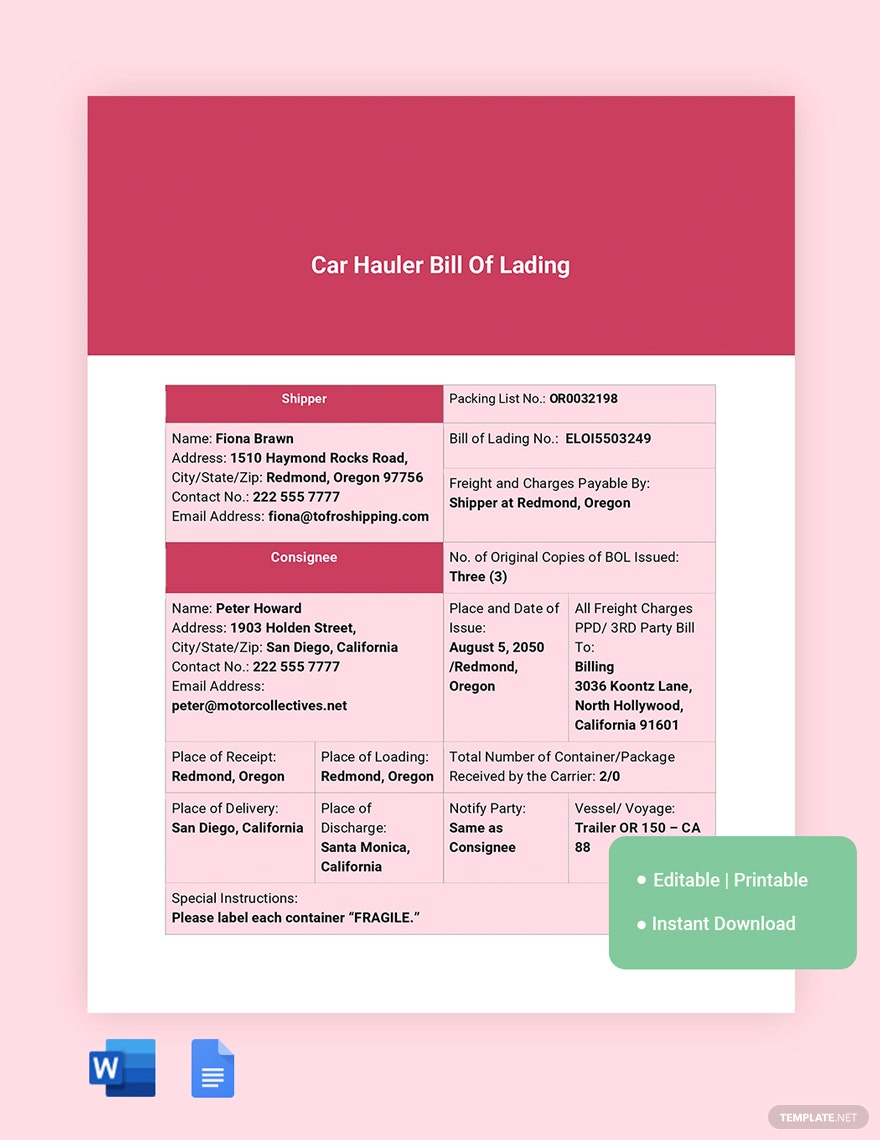 Shipments that are transported through international waters would need an ocean bill of lading document. This would serve as the contract and receipt between the carrier and the shipper. The document should outline the type, quantity, and destination of goods being carried. 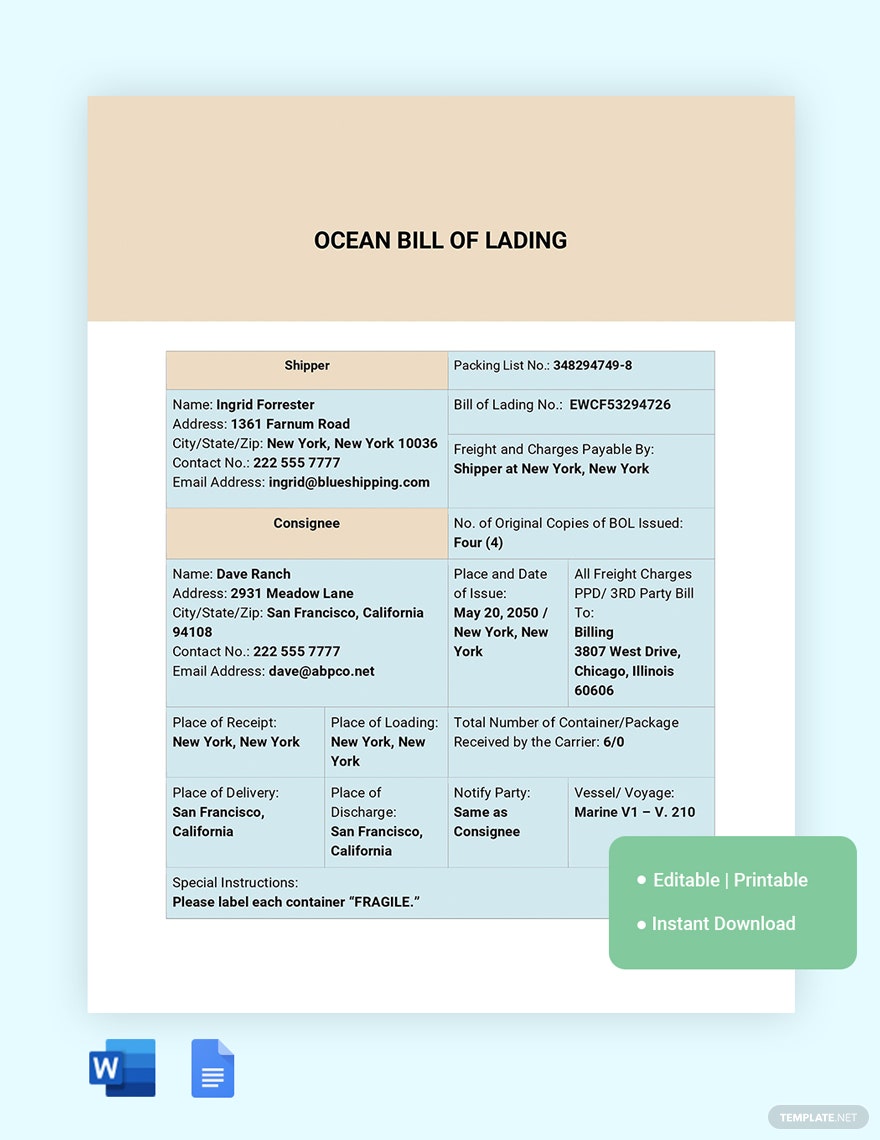 A consignee bill of lading is a document needed by the consignee or the receiver of the shipment. It is important that their names, shipping dates, and other details are written correctly in this form. They will need to present the BOL in order to secure the release of the shipment by the carrier and claim ownership. 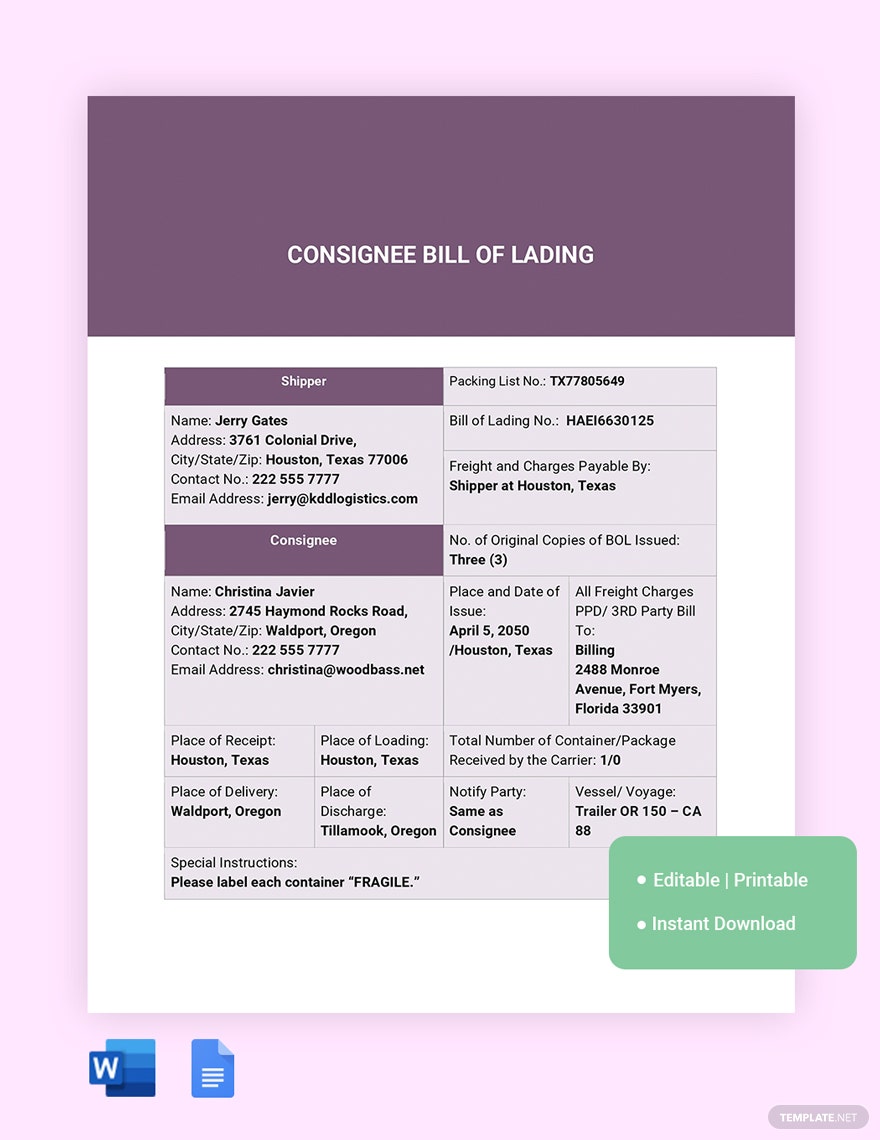 A tanker bill of lading form is essential for large shipments such as tankers or tank ships that carry petroleum products or other liquid cargo. This is a charter party bill of lading that is commonly used when the ship is on a voyage charter. Or perhaps, this is also used for ships that are commissioned to carry liquids or gases in bulk and commodities, such as vegetable oils, molasses, and wine. 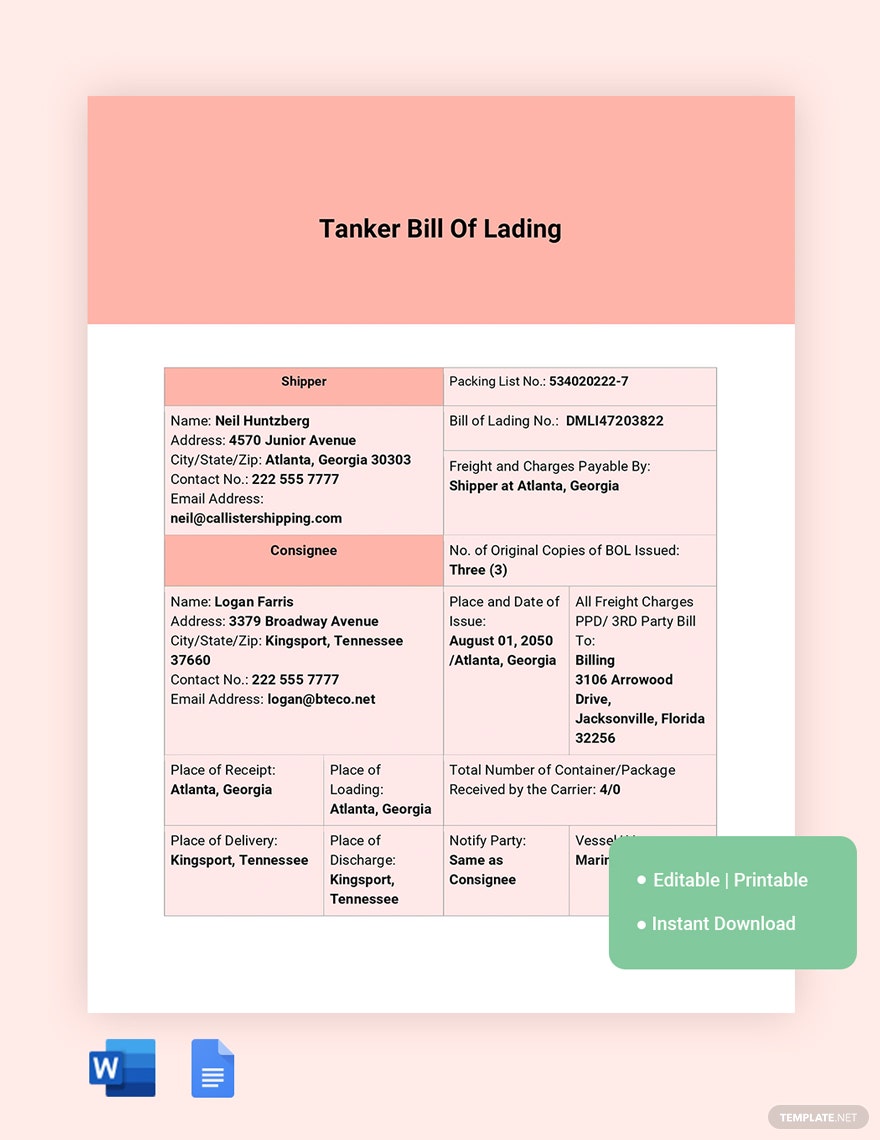 For shipments transported through international airlines, an airway bill of lading, airway bill, or air consignment note is used. It has the same set of details as most bills of ladings and is used to track the shipment’s movement. To create this document, our template is designed to help you complete this document from its layout to its contents. 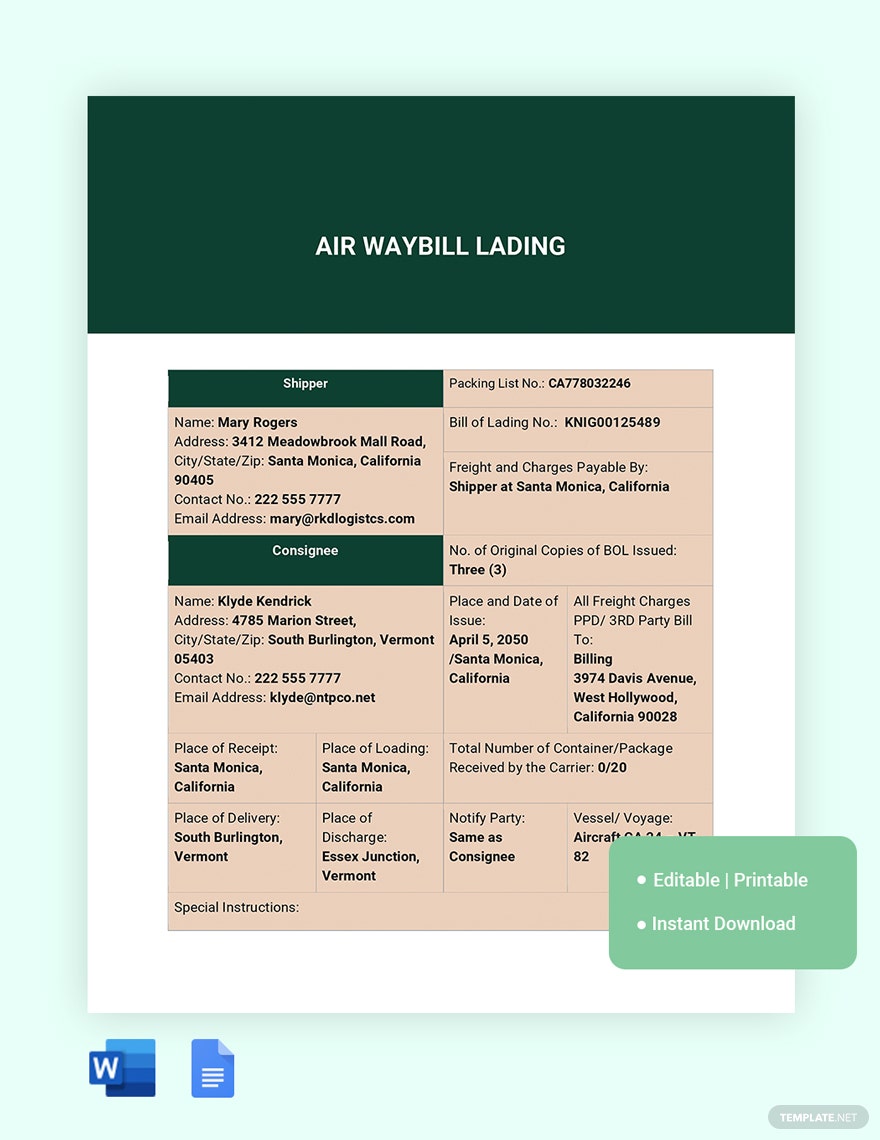 A uniform bill of lading is an essential document used by an exporter and a carrier or forwarder which details the items and property being transported. This details the shipment transaction, which includes terms and policies regarding the carrier’s liability, transport time frame, how to file a claim for a lost or damaged shipment, how insurance will be applied, and the storage and disposal of a shipment. It is important that the details written in the form are correct as additional shipping charges may incur if the shipper misrepresents the type of goods being transported. 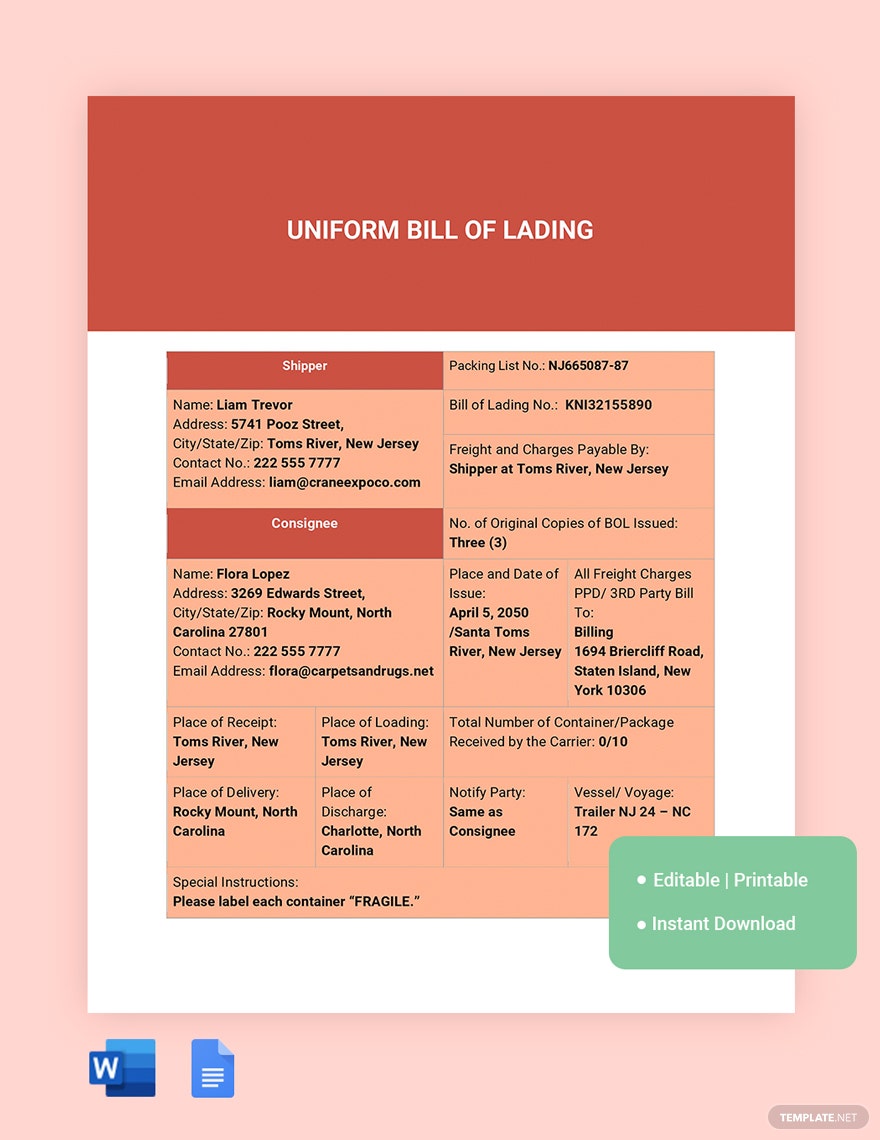 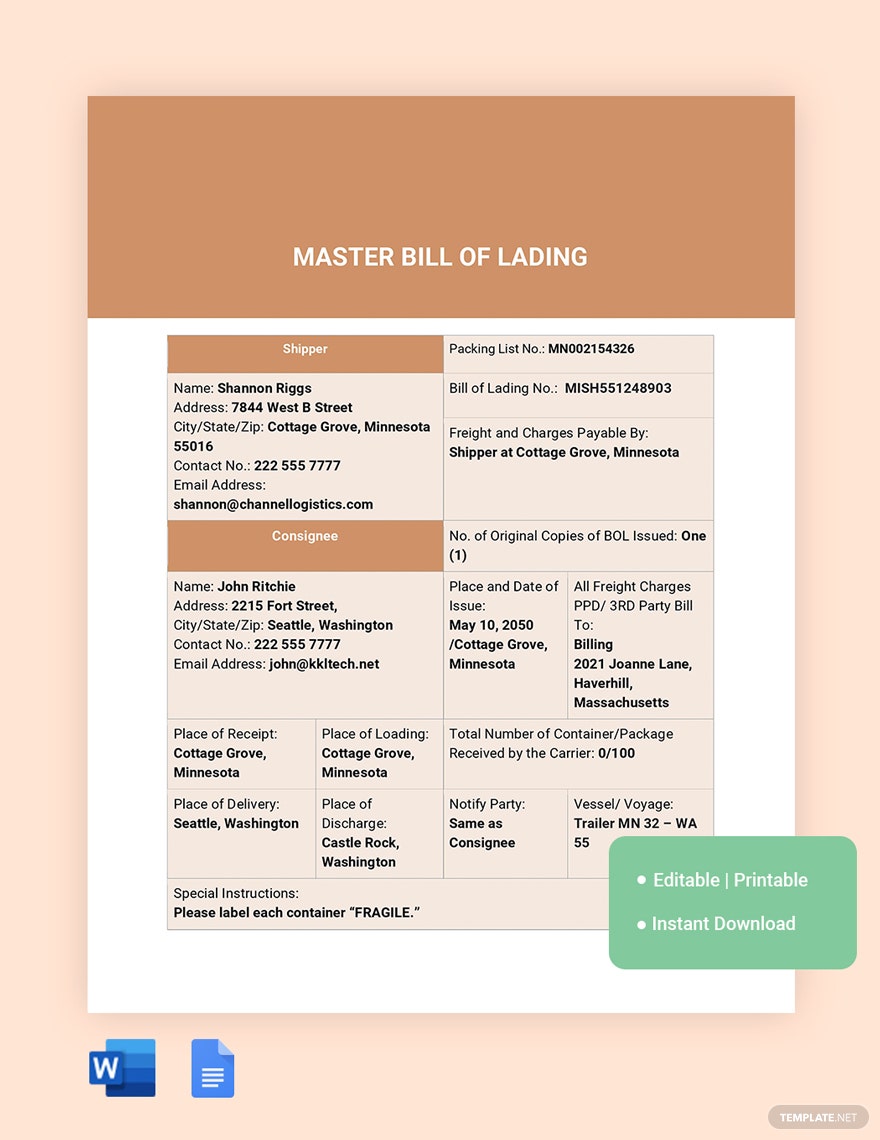 Why Do Carriers use Bills of Lading?

Carriers use bills of lading in order to execute a shipment for import and export trade.

What Is an Express Bill of Lading?

An express bill of lading is a type of BOL that requires the carrier to deliver the consignee since payment has already been made beforehand.

What Is a Bill of Lading Receipt?

One of the main functions of a bill of lading is that it acts as a receipt for the shipping services.

How Do You Release a Bill of Lading?

A bill of lading is released after the delivery has been made and all necessary charges are paid.

What Is the Purpose of the Bill of Lading Airway Bill?

Airlines play a major role in shipping cargo across the borders, so an airway bill of lading is specifically used for the carriage of contract between the carrier and the shipper.

What Does Consignment mean in a Bill of Lading?

A consignment is a process that results from the agreement of parties involving a shipment of goods.

Why Is the Bill of Lading Important in Freight Transport?

A bill of lading plays an important role in freight transport since it contains a trail of information needed to process and execute a shipment.

How Does a Bill of Lading Work?

A bill of lading works as a receipt and contract between freight forwarder and shipper and, in some cases, is used to ensure that exporters receive their payments.

What Do You Do with a Bill of Lading?

You need to complete a bill of lading paper form with all its necessary details in order to safely and successfully ship an item or cargo.

What Is the Impact of the Bill of Lading on the Industry?

The impact of a BOL document in the logistics industry is that it serves as an essential tool that documents a trail of information and ensures the safe passage of one parcel/cargo across local and international borders.

Does Every Shipment Have a Bill of Lading?

A bill of lading is a mandatory document because of the details it contains so failure to prepare this document will risk delays in shipments.

Why Is it Called a Bill of Lading?

A bill of lading is derived from the word “bill” which means a written statement of the amount due and the word “lade” which means to put the cargo onto a ship or mode of transportation.