A press release document can contain a formal statement by the company toward its intended audience or it may also contain a brief announcement. When written properly, the document can garner valuable media attention while allowing the brand or the company to shape the narrative to their preference. 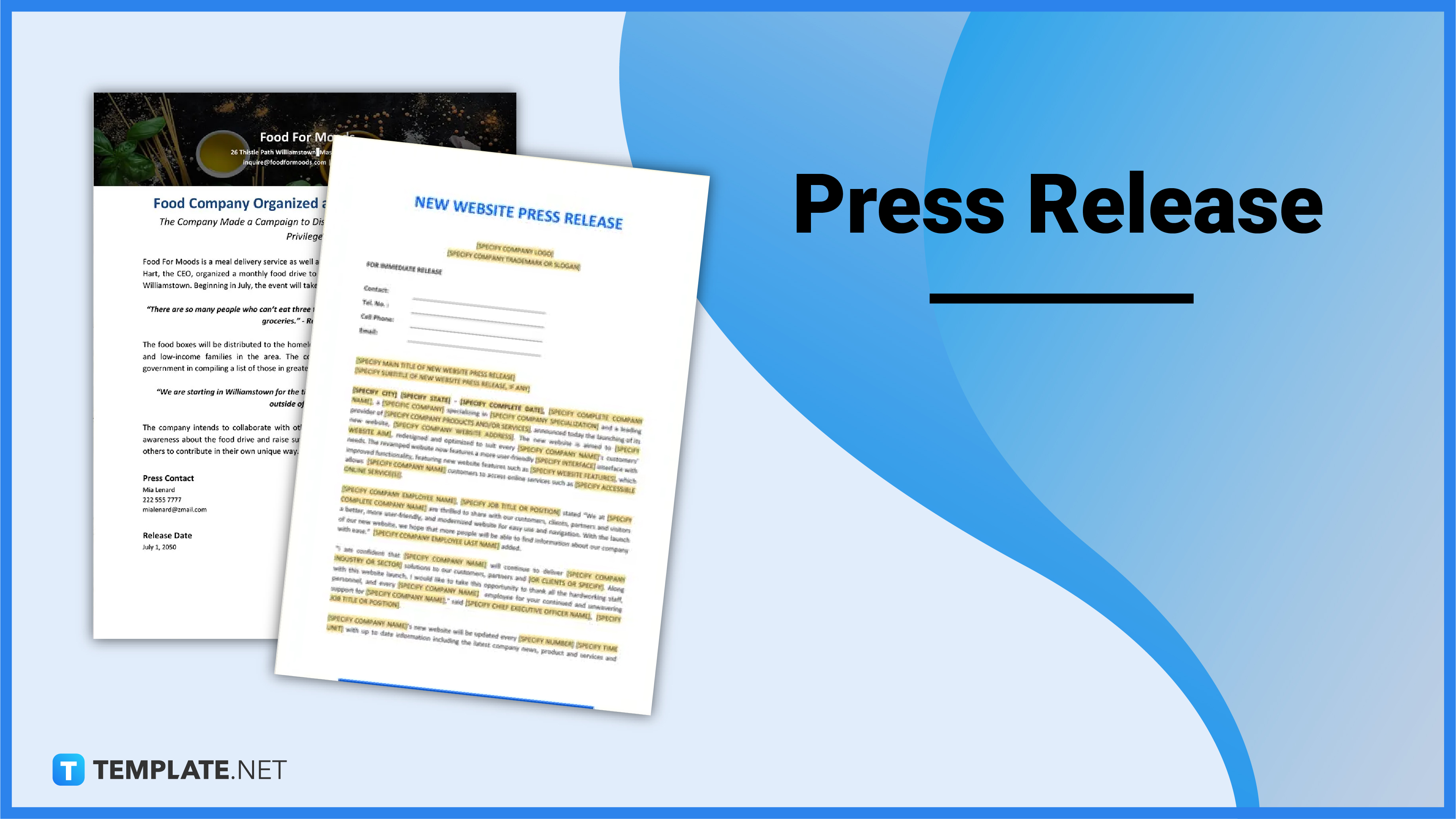 A press release is defined as an official statement issued to newspapers and other media giving information about a particular matter.

It should also read like a news story, written in third-person, should cite quotes and sources, and should also contain standard press release information.

What Is a Press Release?

A press release refers to an official statement delivered to members of the news media to give out relevant information, make an official statement, or have an announcement directed for public release. It’s most commonly delivered via a live conference that’s aired on television or through their respective social media sites or via their official website. This document is usually sent to a company’s stakeholders, their business community, their potential business partners, and so on.

An event press release is a document that is created by a company that’s intended for release to media outlets and announces to current or prospective customers about an event or multiple events that are to be hosted by the company. This document can also be made and released to the public after the event has happened to let the public know about any relevant details regarding the event. This type of press release contains information such as the theme of the event, the location of the event, the date and time of the event, and so on. 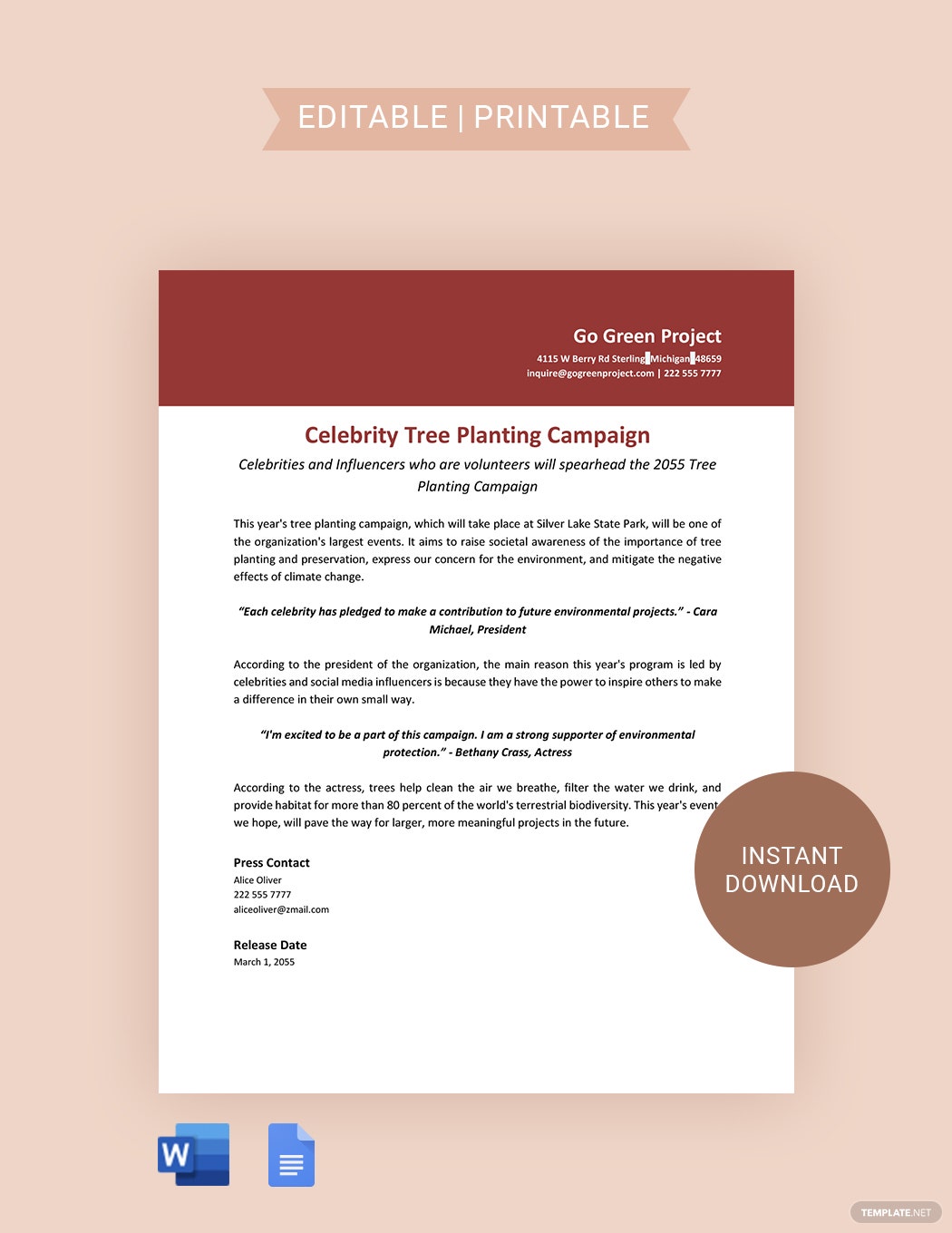 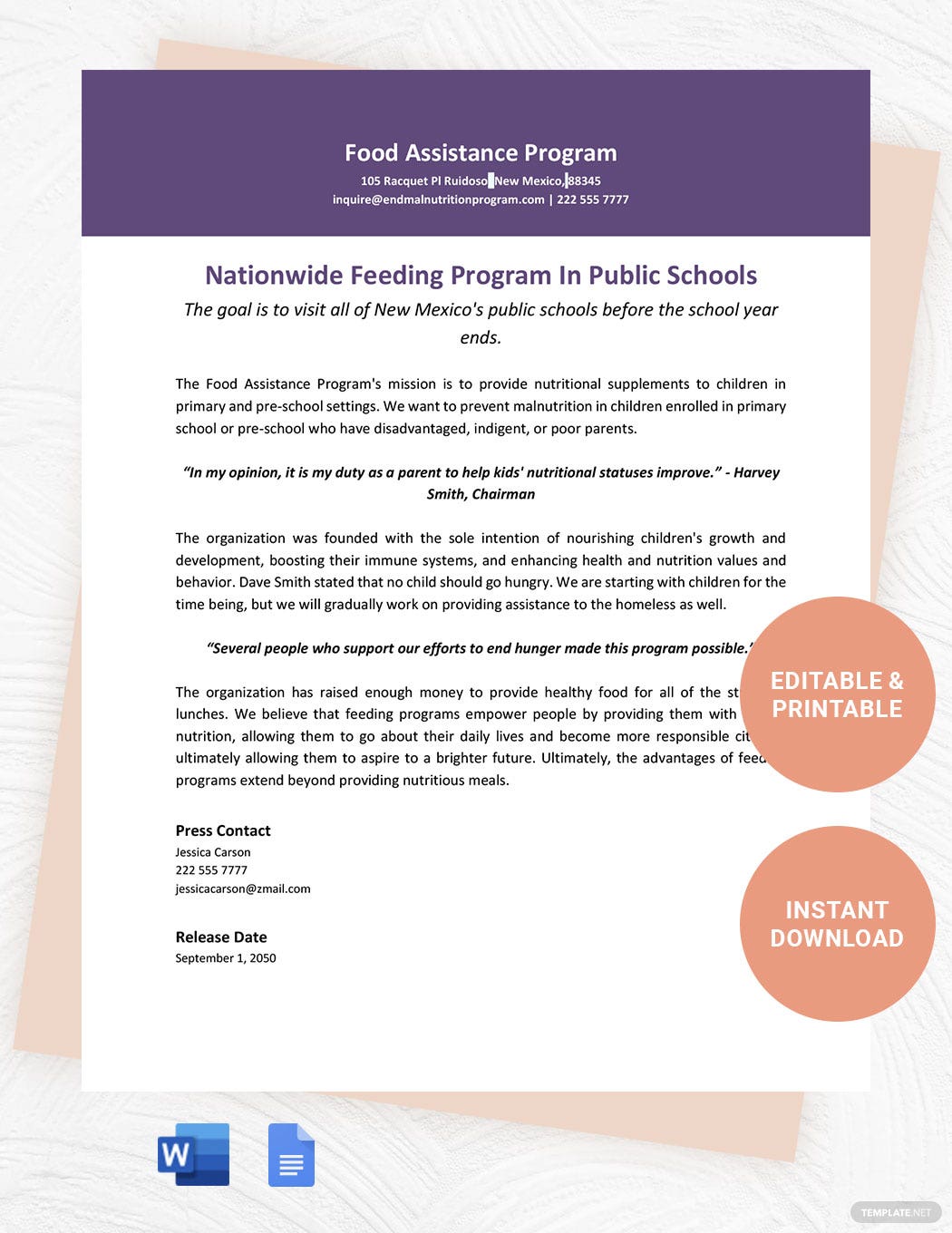 A new hire press release is a report document that’s announced by companies to the public and usually talks about the details of an individual who they’ve just hired. This document usually covers the skills, the work history, and the expected contributions of the new hire. This is generally released by companies to build their brand and raise workplace morale. 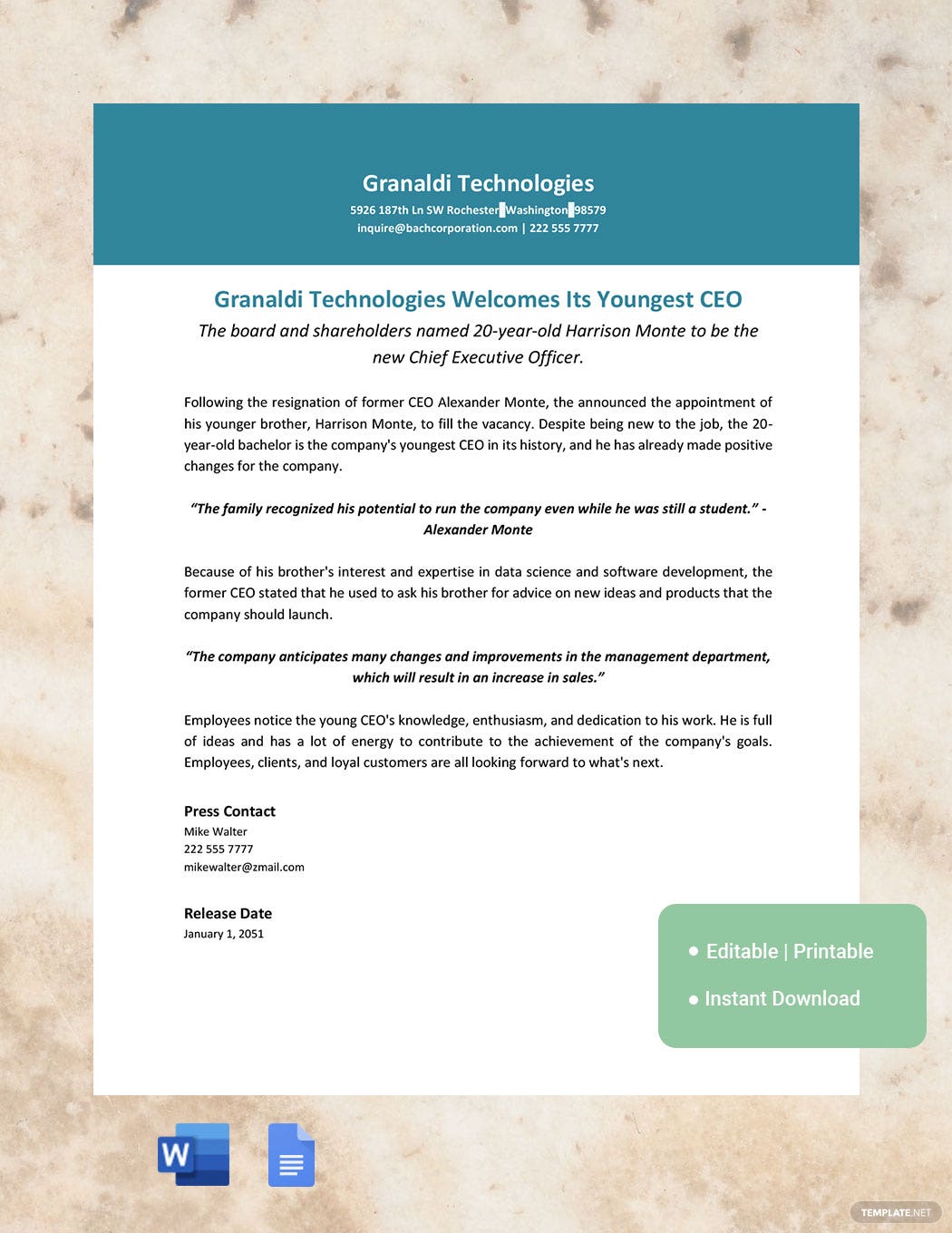 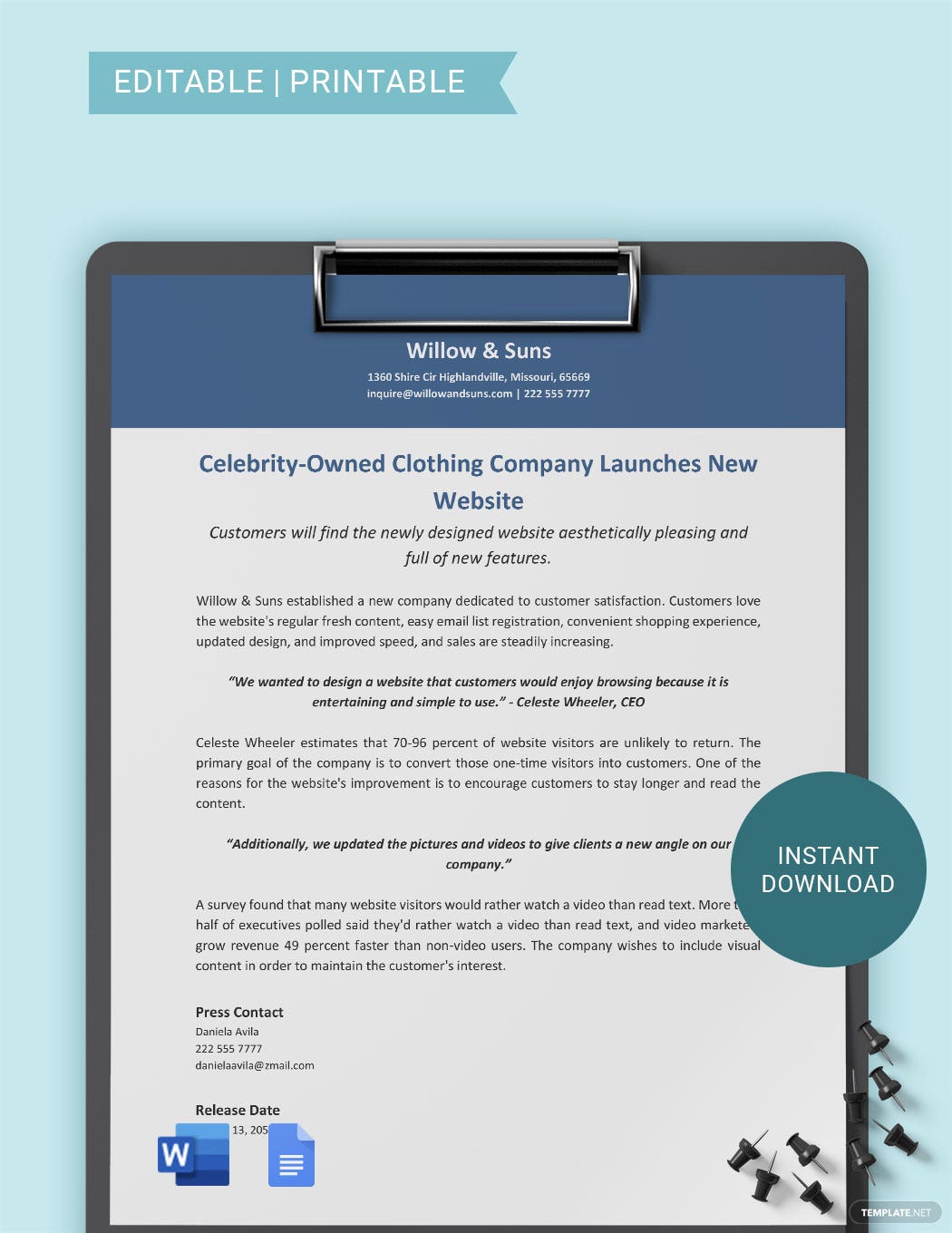 Press release documents are great for most businesses, and a particular example in which this document can be useful is for real estate agents. A real estate press release serves as an avenue for the agents to spread the word about what they do. In other words, this document can be really helpful for them to increase their lead generation and their chances of getting noticed by prospects. 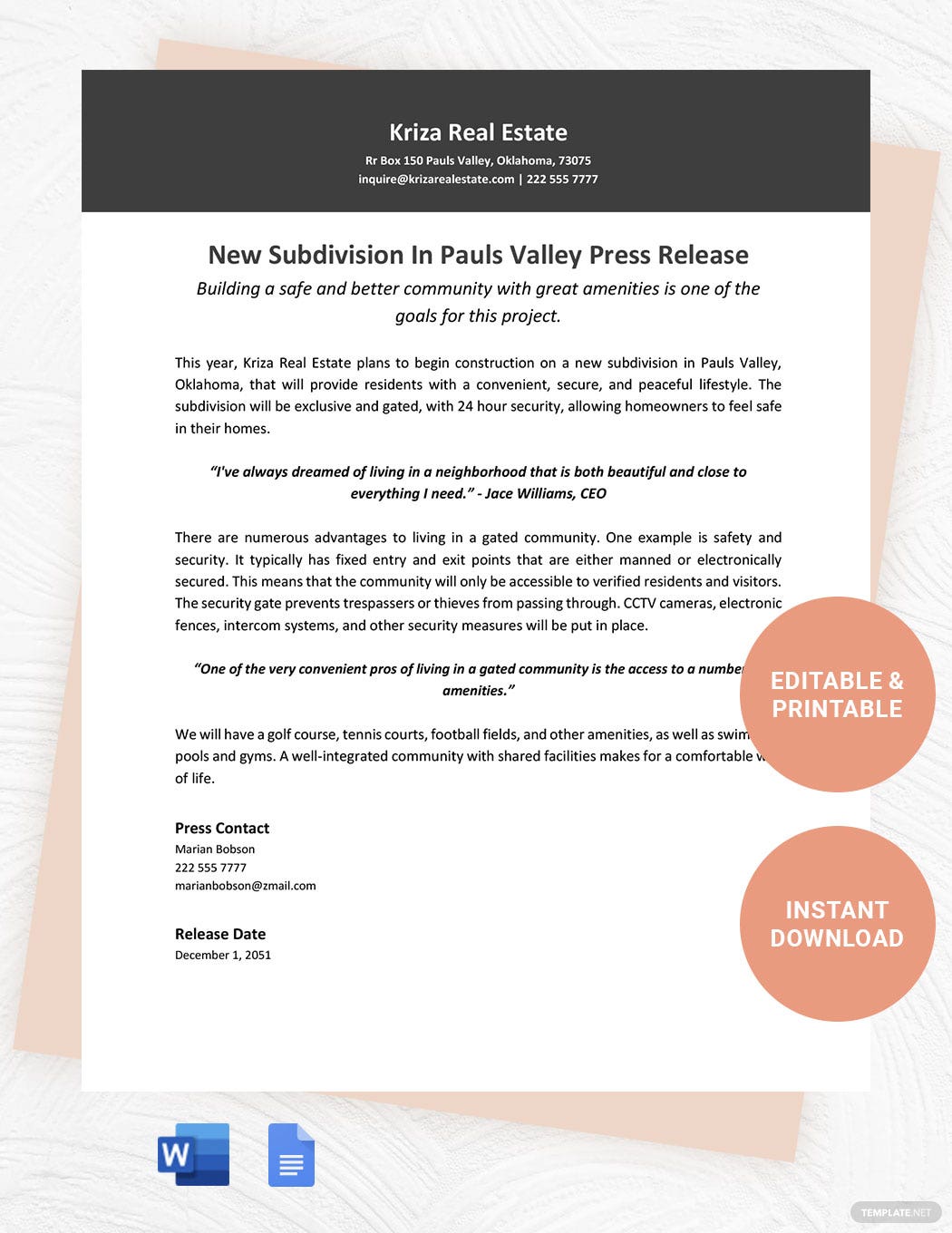 A new employee press release is a document that’s used by companies to welcome a new employee to their department. This document serves as a formal way to inform everyone that needs to be informed about a new employee, which can be a new executive chairman. The format of this press release usually follows specific standards and is usually published in the internal communications channels of the company or on news sites. 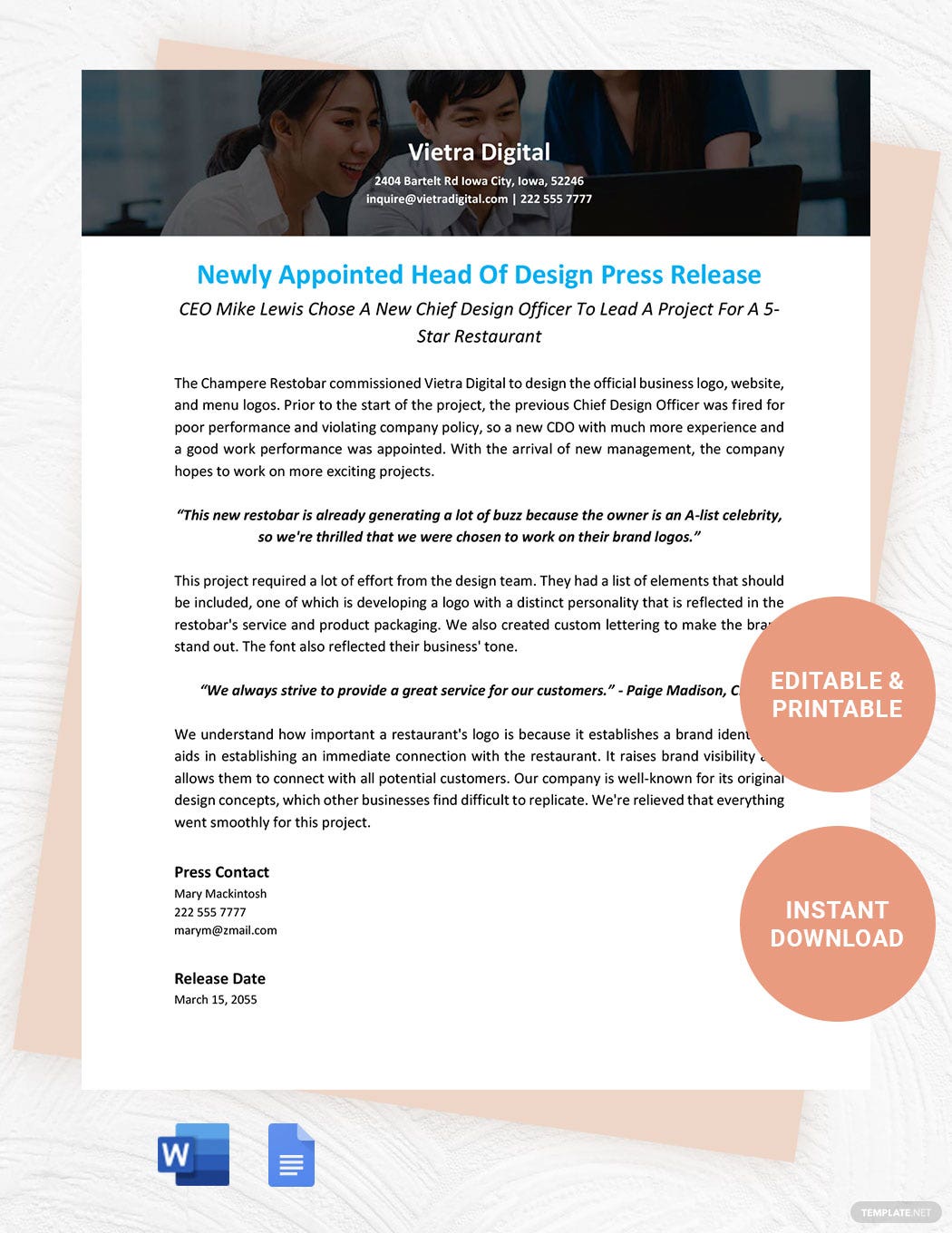 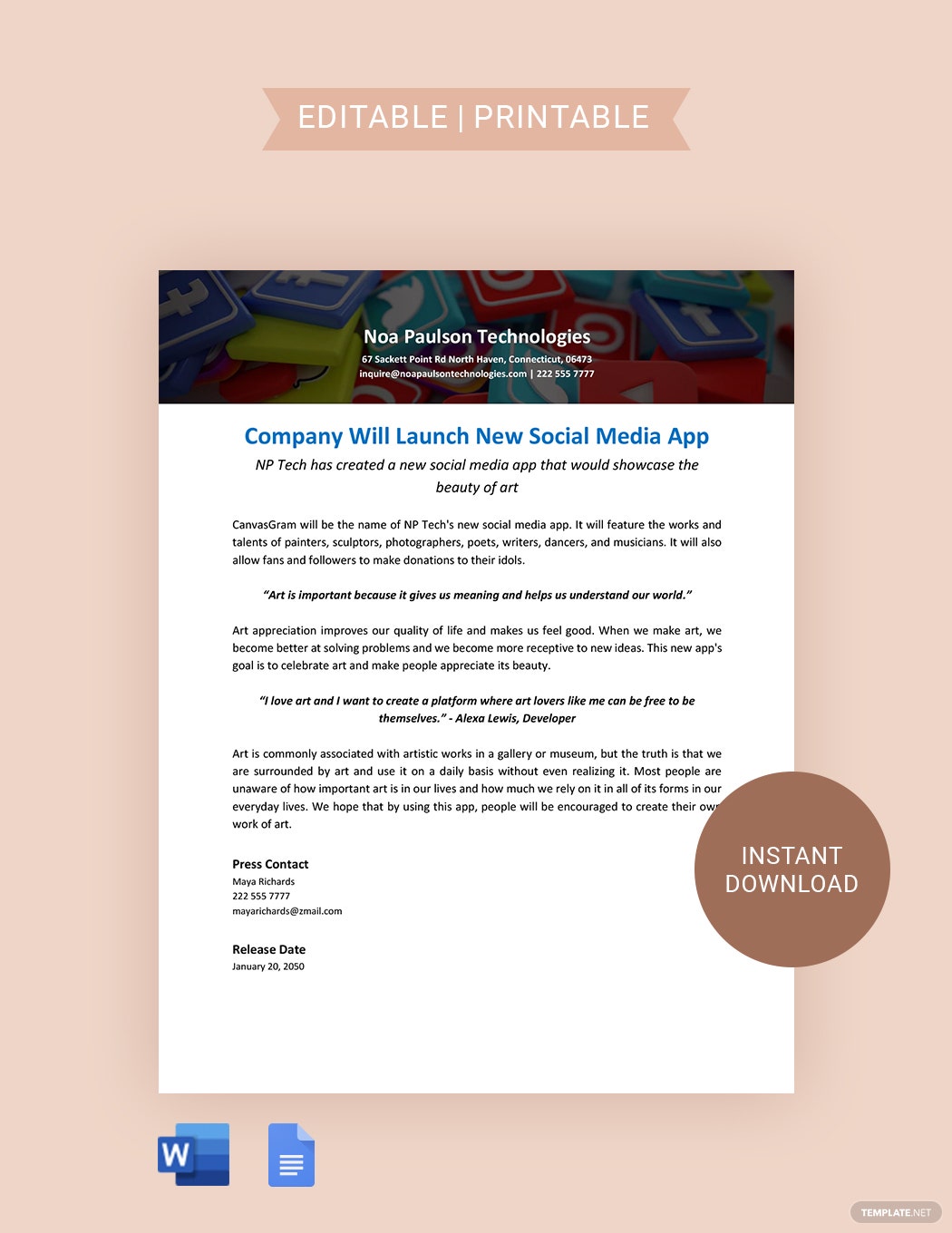 A business acquisition press release is a document that’s released by companies that serve as a message to notify everyone concerned about a recent business acquisition. This style of press release usually covers the names of everyone involved in the acquisition, details about the transaction, and the anticipated effect that it will have. It is also important that this document be presented in a way that the key stakeholders do not refuse the acquisition thoughtlessly. 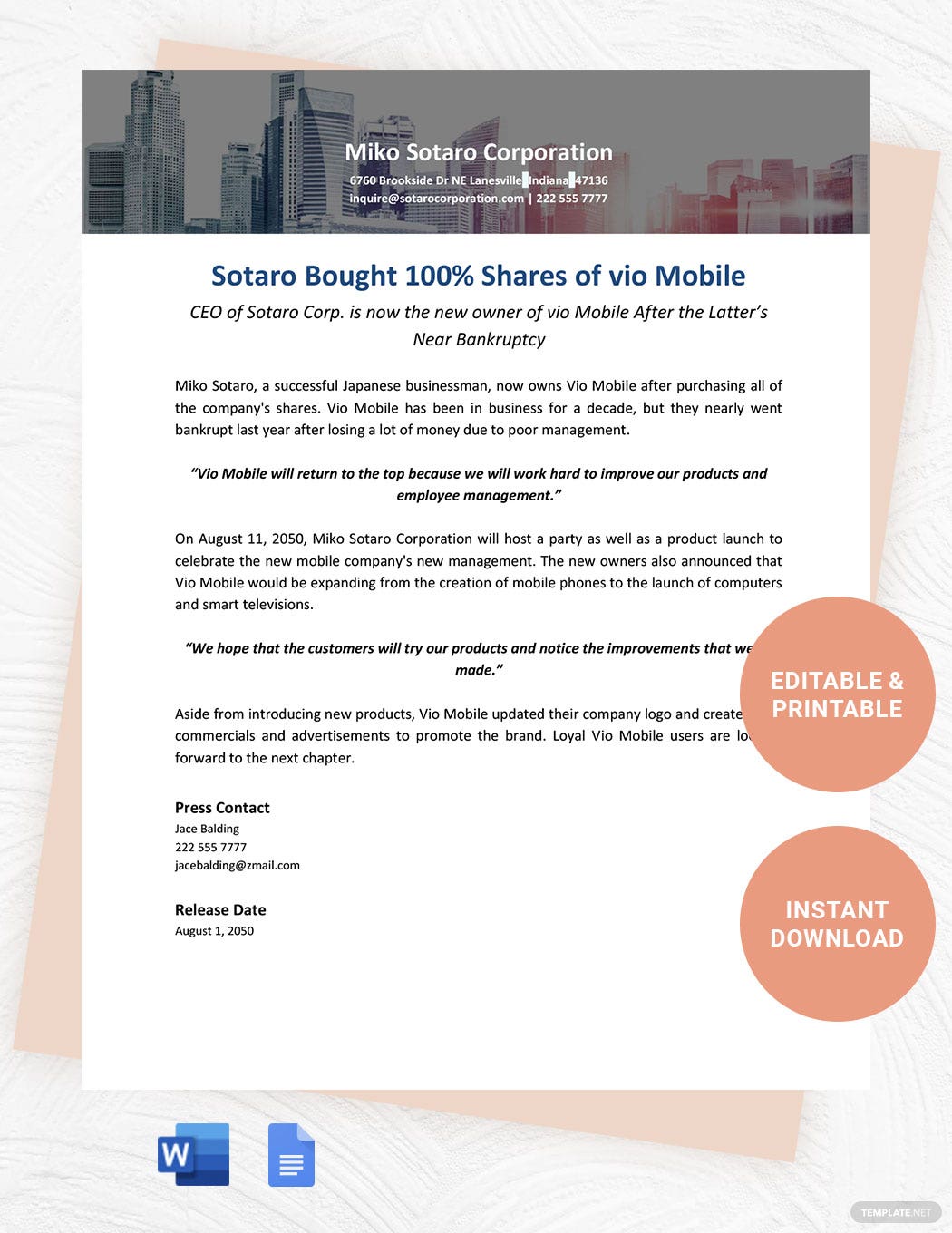 A grand opening press release is a press release template that announces an upcoming opening day of a large establishment. It can be an important document for establishments since this document will allow them to garner public awareness about the upcoming opening event. This also follows a specific format such as the headline, the event details, supporting information, and contact information. 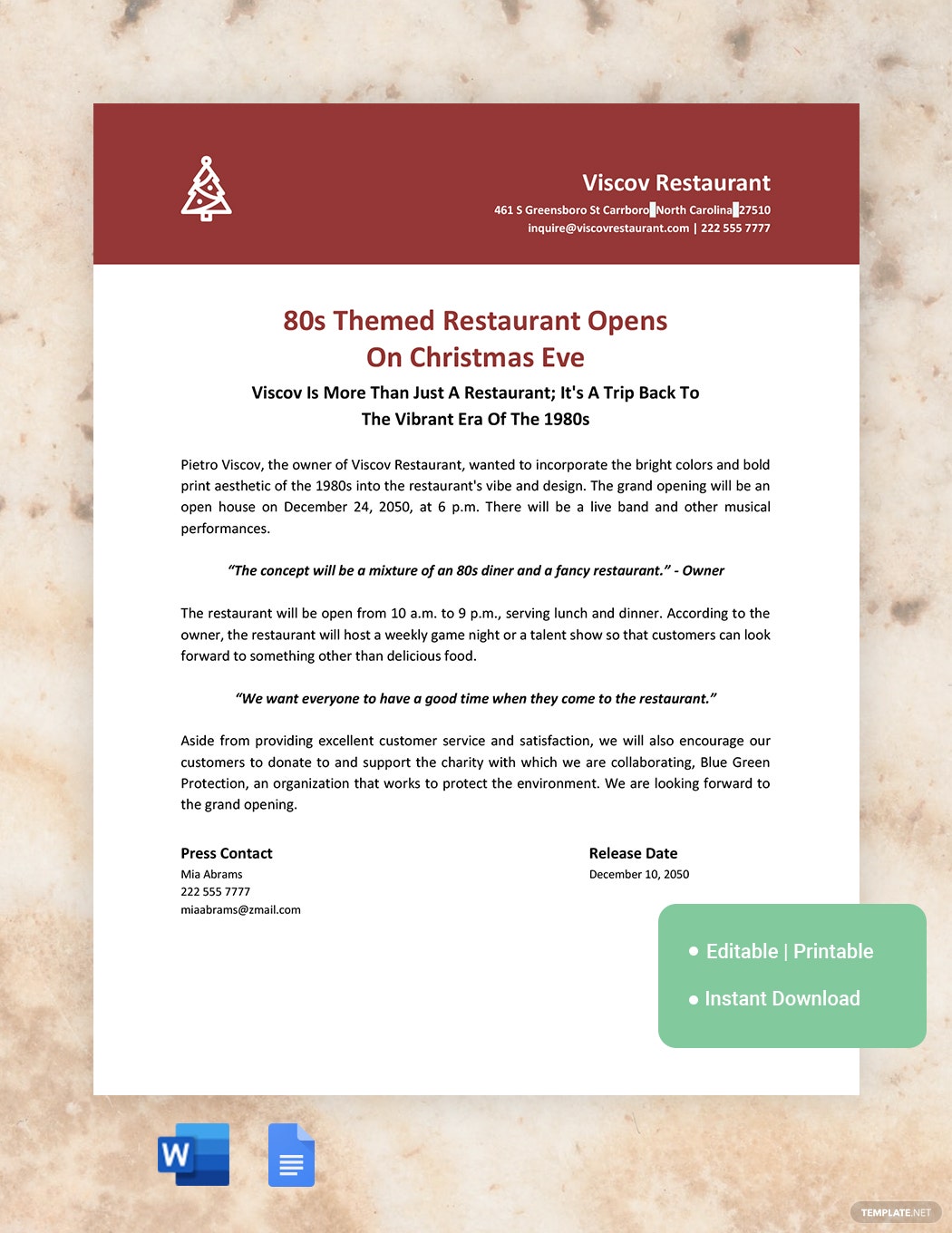 A data breach press release can be used by companies to convey a message to everyone concerned that a security incident such as a data breach has occurred in their office. The content of this document usually revolves around confidential information being taken without the company’s knowledge. Additionally, it may also state the culprit of the incident, such as external perpetrators or former employees. 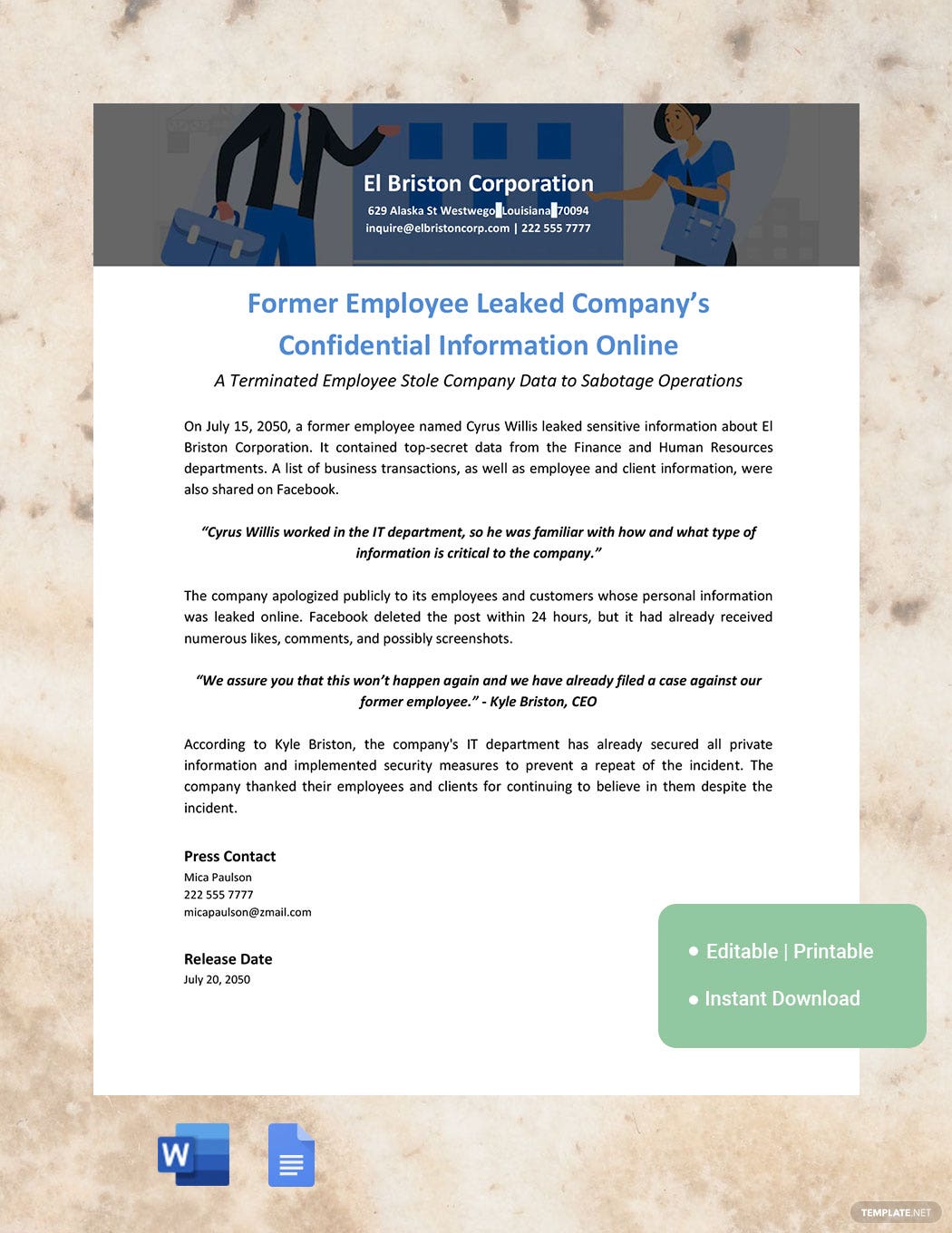 Whenever companies create a press release document, the main goal that they should keep in mind is that the statement should, at the very least, pique the interest of a journalist or publication. Companies should allow these documents to also gain significant attention in the media but at the same time let these documents tell the narrative that they prefer. Here are some other uses and importance of this type of paper.

One key reason why this document is important, especially for large companies is so that they have a medium they can use to deliver any kind of company announcement. This can involve any form of restructuring, company expansion, a big strategic partnership, and so on. Usually, the most important audience of these statements is the company’s stakeholders.

It helps save resources

Press releases are also important for media corporations, and not just the companies that put out these documents. This is because it helps decrease costs while improving the amount of material that a media company can release at a given time. Since the material is already pre-made or pre-packaged for the media companies to use, they save time and the budget that’s needed when they usually get their stories firsthand and build them from scratch.

A reason why this document is essential for brands, no matter how small or big they are, is that it helps them communicate any announcements that are relevant to the product or service they create. This can involve the launch of new products, improvement of current products, and so on. Usually, the audience for this kind of release would be the target market that the brand is appealing to.

This function of a press release document is more prevalent in today’s age due to the widespread use of online news distributors. Whenever a well-written press release gets released to the public, there is a chance that it gets the attention of customers, which, in turn, will lead to direct engagement and sharing on social channels. For this document to be able to do so, however, it needs to place high in the search rankings since it enhances the exposure to the target audience.

Another purpose of a press release that can benefit companies is for breaking news announcements. This can communicate any urgent matters or drastic events in a company, such as the resignation of a major individual, or even the death of a high-ranking company officer. Whenever a document of this purpose is being created, the most efficient way to do so would be to state the facts and accompany it with a clear explanation.

What’s in a Press Release? Parts?

This is the first part that the reader usually sees and indicates what the press release is all about.

This section summarizes the key points of the press release document.

This part of the press release indicates the date and location of the announcement.

The main body serves as the most important part of the press release and provides all the information concisely and effectively.

This provides a quick overview of the company that generated the press release.

This is usually indicated by the symbol ### and helps avoid any extra text to be published by accident.

How to Design a Press Release?

2. Decide on how the document is going to be used

4. Modify the contents and the structure according to your purpose 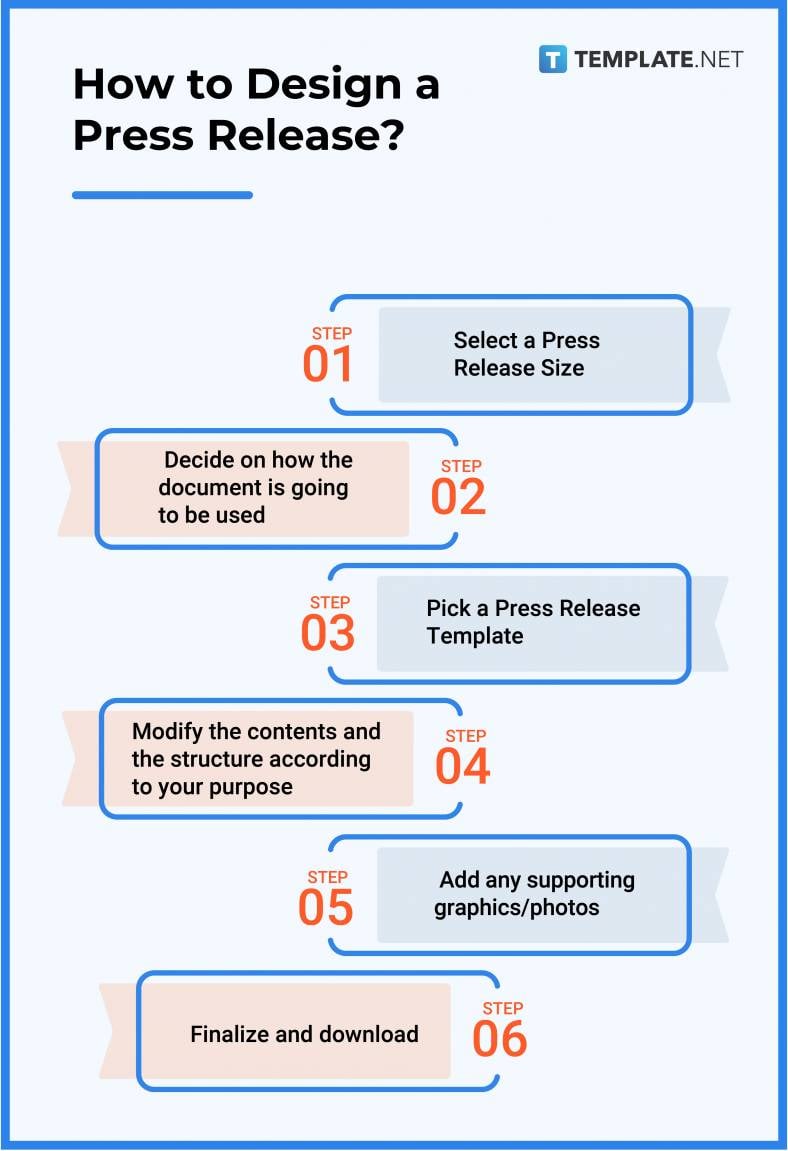 Press release documents are designed to convey information clearly and succinctly, follows a more specific format, and are usually designed to be disseminated to outside media outlets.

A newsletter is a document that’s to be disseminated mainly internally within a business or agency (though exceptions can occur when an external newsletter can also be created), has more freedom of format, and can be varied in its subject matter.

What’s the Difference Between Press Release, Submission, and Report?

A press release is prepared by company staff and usually contains company updates, news, or events, and should be supported by facts or quotes from a company spokesperson.

A submission (or article submission) is a document that usually contains informative content regarding a specific topic and can be written with a casual approach.

A report (or press report) is a document that is prepared by a news reporter and is used as a medium for providing actual information to the general public.

Press release documents usually follow a standardized format, and that includes following the right document sizes to ensure that the layout and structure are preserved and the document can serve its purpose. Here are the common press release sizes that will need to be followed when creating this document.

Press release documents can be pretty commonplace, which makes the process of making one relatively easy. If that doesn’t prove to be the case, then the following press release ideas and examples should be of great help.

What is in a press release?

A press release document usually contains company updates, news, or events, that are deemed by the company to be newsworthy.

What are the 7 parts of a press release?

The 7 parts or key elements of a press release are the headlines, dateline, introduction, body, boilerplate, call to action, and contact details.

What should a press release include?

A press release should include any significant news, company updates regarding new hires or crucial events, and any other information that can be considered newsworthy by the company.

What is the structure of a press release?

The structure of a press release usually includes the headline, the lead paragraph, any supporting paragraphs, and a final one that contains relevant background information.

How do press releases work?

Press releases work by drawing media attention to newsworthy events in the company.

What are the three qualities of a good press release?

The three qualities that make a press release really effective are being nimble, being atomized in content, and is useful to the readers.

What do you do with a press release?

When you create a press release, the one thing that you will do is to accurately represent and promote significant corporate news.

What does ### mean in a press release?

The ### symbol in a press release signifies the end of a document and helps publishers to not accidentally publish any extra text.

What makes a successful press release?

The factors that make a successful press release are the eye-catching headline, a compelling and shareable story, a call to action, and an effective distribution strategy.

What is a call to action in a press release?

A call to action in a press release refers to the implied suggestion of marketing and is designed to produce a measurable action from the reader.