Press release ideas should be pretty commonplace, as it is still frequently used in today’s times. Because of this, creating one should be a straightforward process if one knows what he/she is doing.

A press release document refers to a statement that can be used by a company or a business and is usually distributed to a journalist or a member of the news media for the purpose of giving out information about a particular matter. It is usually brief in its layout and simple in format, which makes it a relatively easy document to create. Should one find themselves in difficulty, however, there are different examples that exist which can be of great help.

A law enforcement press release is an example of a document that can be used by police officers for a variety of purposes. The press release may revolve around the announcement of a new member of their police squad, a replacement of their chief of staff, or a simple public safety notification. Here’s what a sample of this template generally looks like. 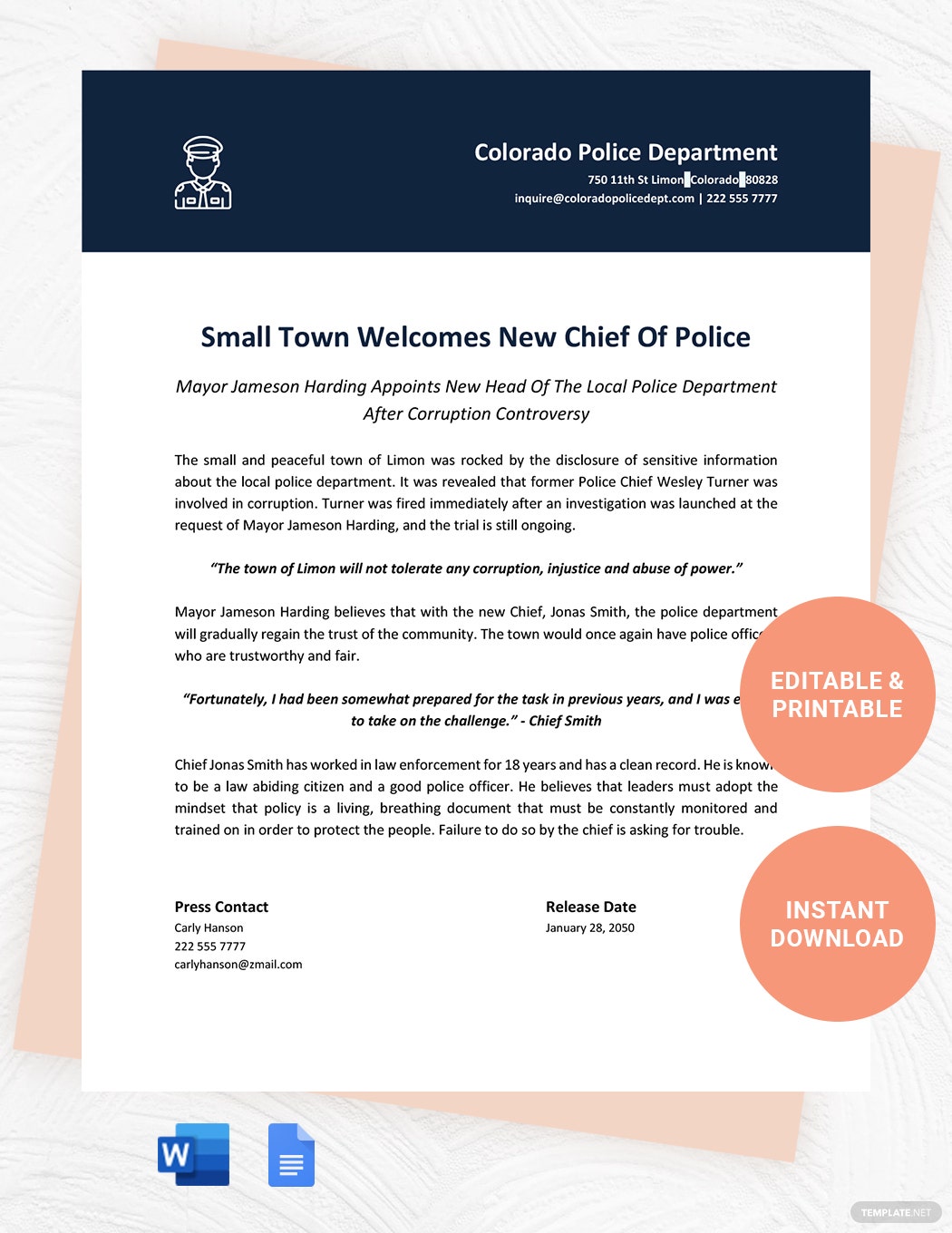 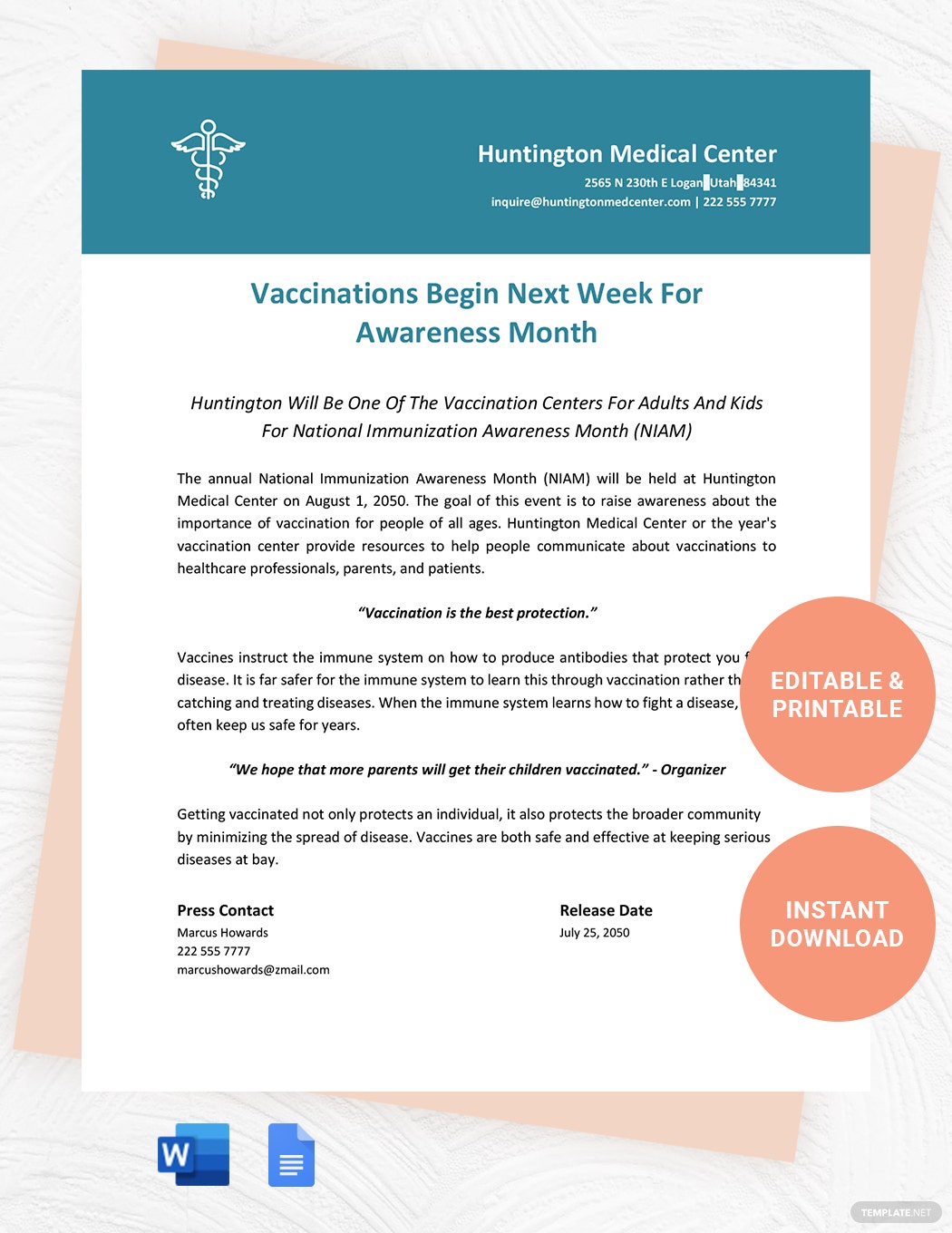 Aside from announcing the release of a new product, a press release can also be used to inform the relevant audience about the addition of a new hire to a company. One such example is a new board member press release, which is used to inform the media and the public of additions to a company’s board. This document contains the roles that the new members will take, and can also include brief quotes that state what will be the future with them onboard. 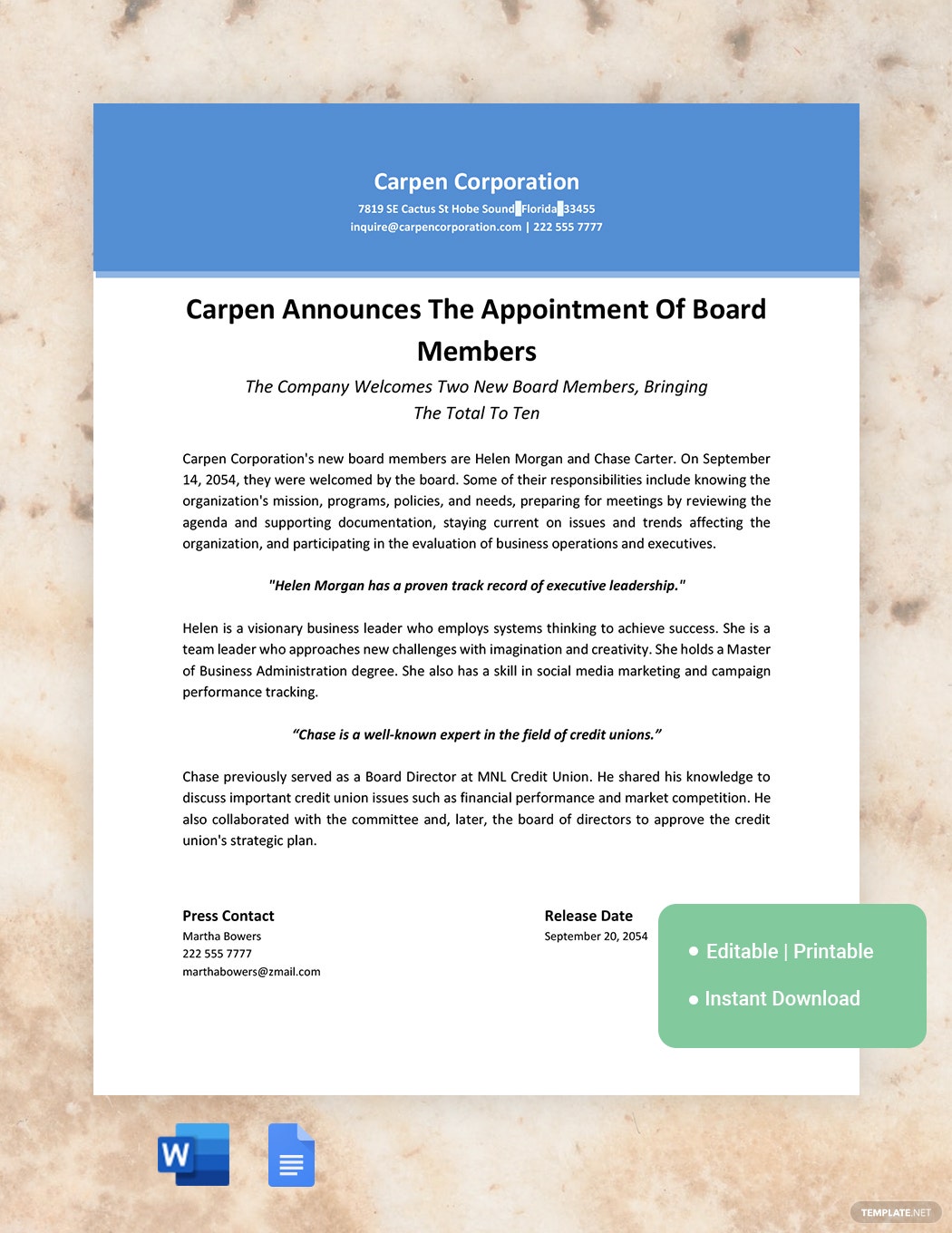 Companies usually celebrate big milestones in their lifetime, which include their founding anniversaries. In order to gain exposure and make headlines from celebrating their anniversary, a company anniversary press release can be utilized by them. When written properly, this document can even set a precedent for business growth and development as more years pass by. 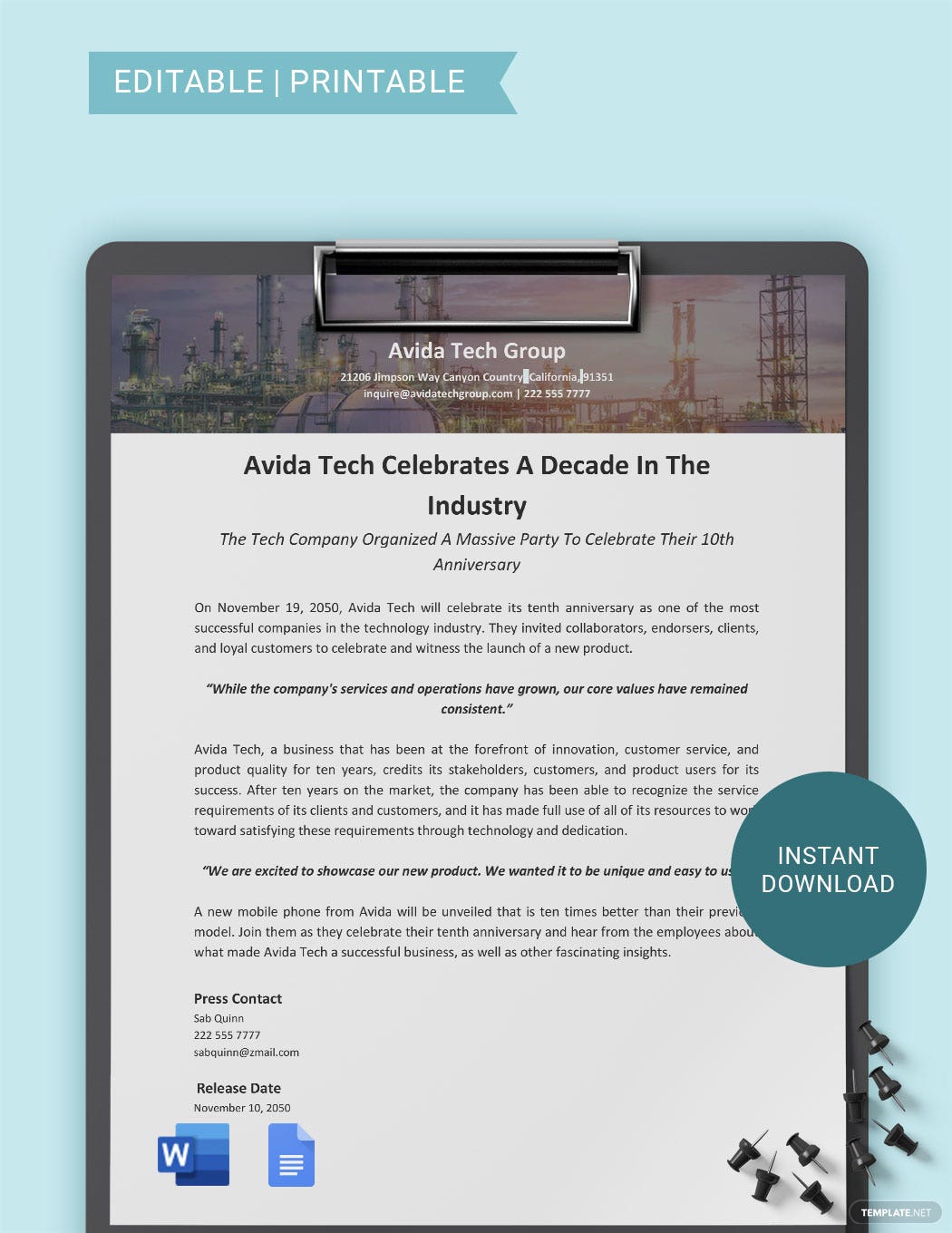 Art exhibitions or shows are really fun places to go to, and one way for the event organizers to let the people know that they’re hosting this event is by creating an art exhibition press release. This usually contains relevant/background information about the artist, the work, and the show. This document often serves as the first introduction to the exhibit for the public and the press. 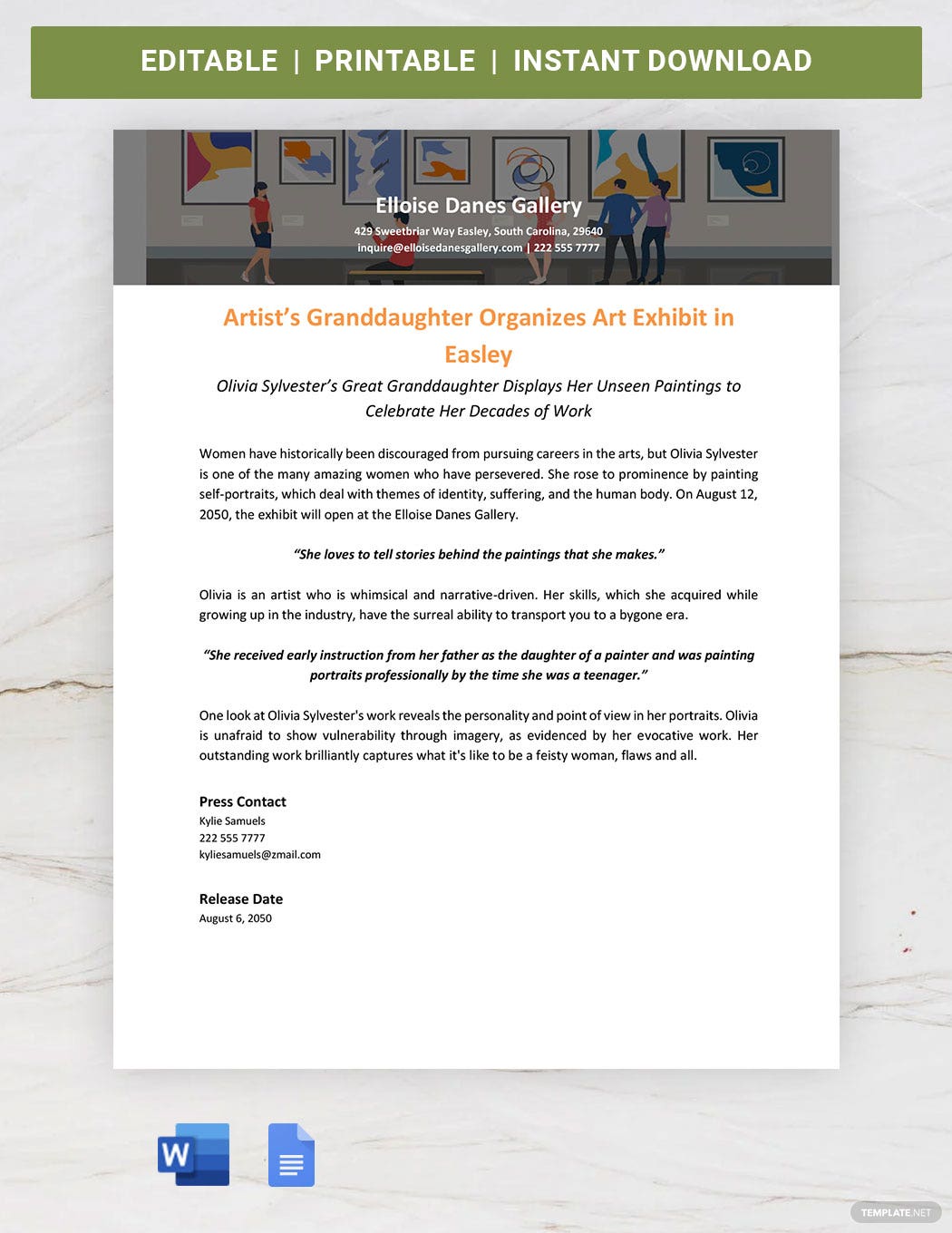 A campaign, in its most basic definition, refers to an organized course of action to achieve a goal. Be it a political campaign or a simple donation drive campaign, information needs to be sent out to the public to gain support, and one of the ideal ways of sending out information is by making a campaign press release. Here’s what the design of this form of press release generally looks like. 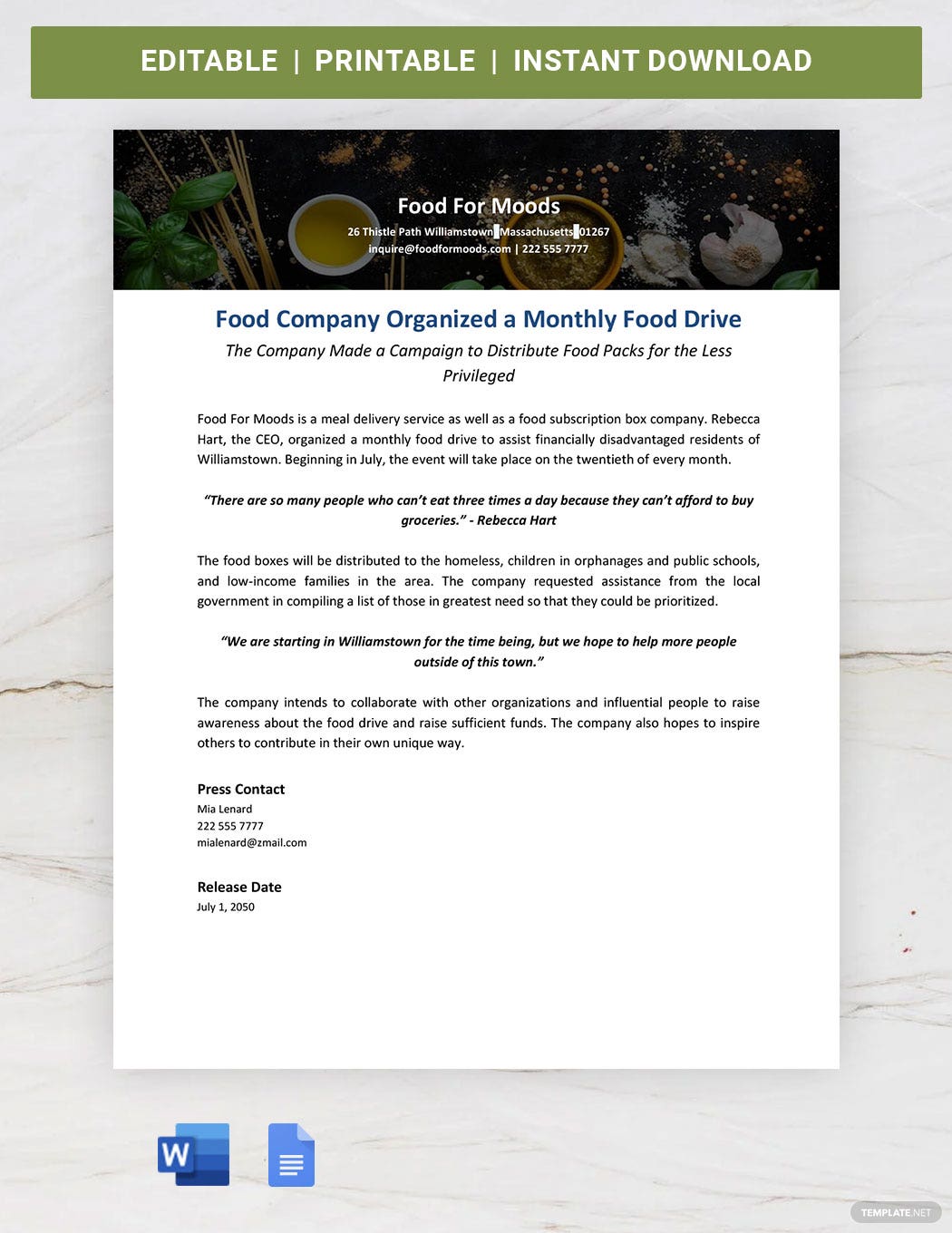 Creating a book press release can be beneficial for an author since it can grab a journalist’s attention about the book you’re making a draft on, which, in turn, will get the audience interested and waiting for its release. In other words, this document can be used by an author to showcase their book to journalists and news organizations in an interesting manner. Its key intention is to convince them that an author’s book is worth covering/writing a story for. 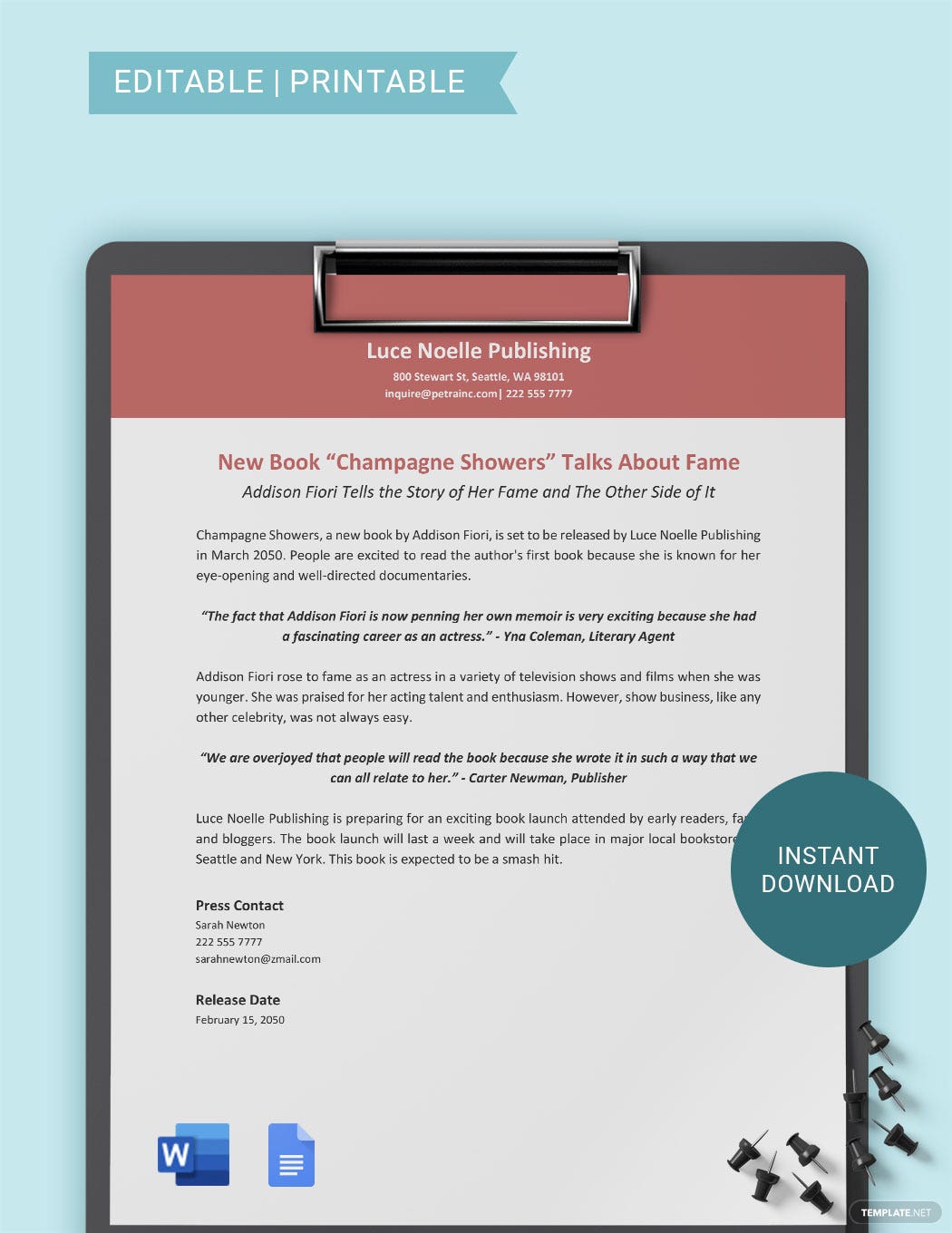 More often than not, artists want their work to be known to the general public. One way of getting their work recognized would be by making an artist press release, which serves as a statement by an artist or a company of artists when declaring important information to their intended audience. The information that can be written here includes new members of an artist group, the release of new music, an artist working on a new film script, or the intention to stop as an artist. 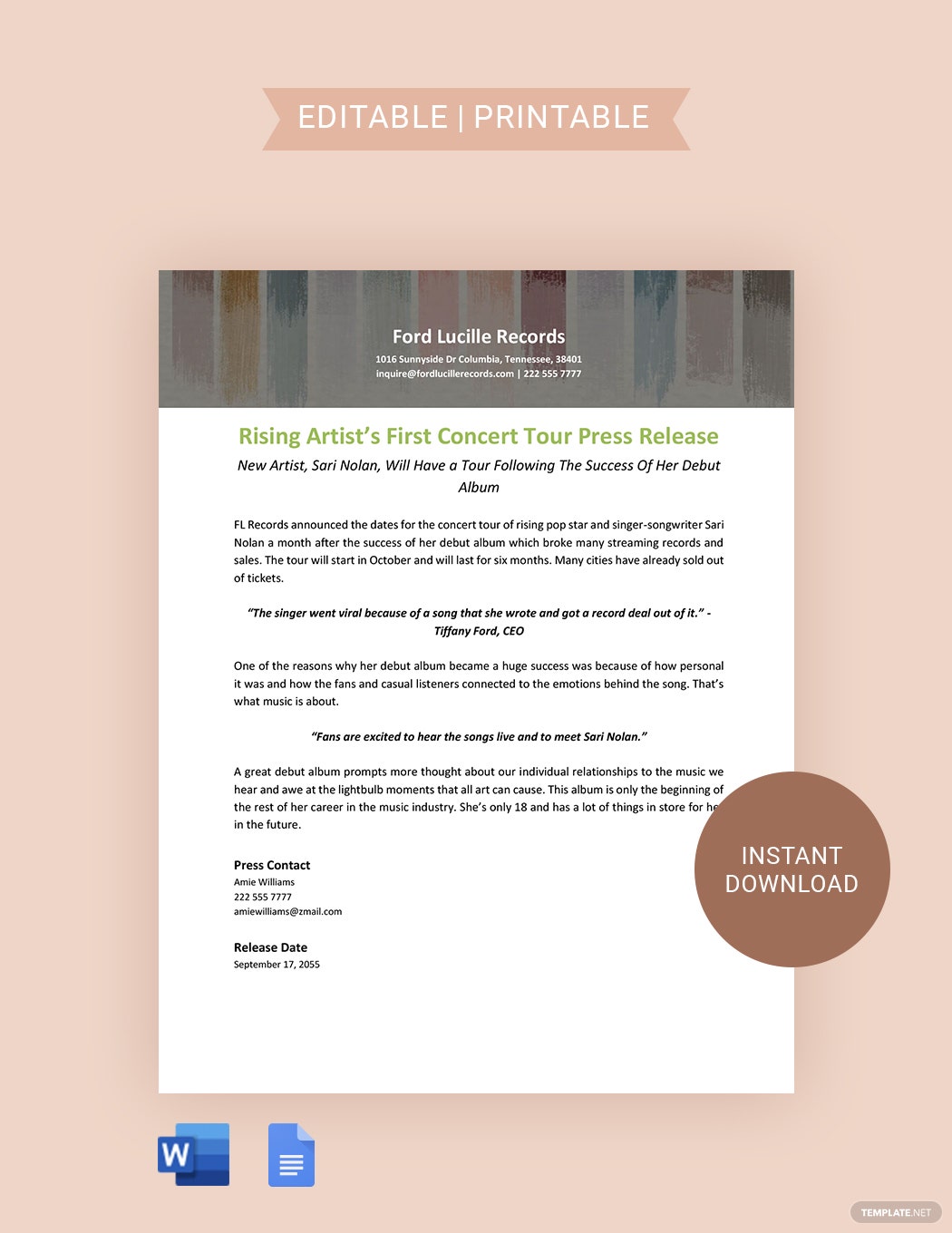 A fundraiser refers to an event that’s designed to raise awareness and support for an organization’s mission, and the proper promotion of such an event is key to gaining support. One way of doing so would be by creating a fundraising press release, which is used to attract both the public and the media to a particular fundraising event. This usually contains the details of the event, the cause that’s being supported, and a call to action. 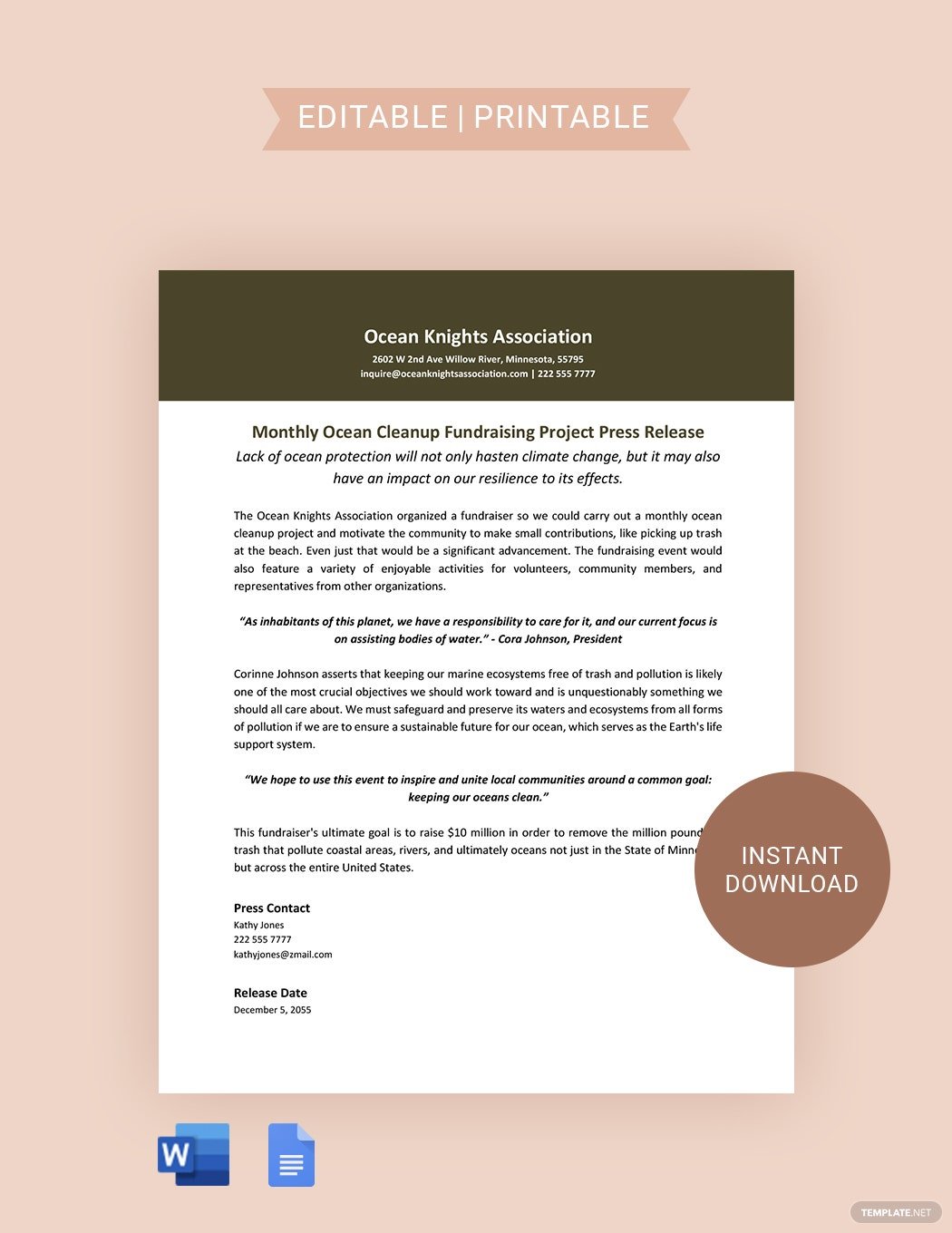 An author press release is a document that can be submitted to journalists or shared on a social website to let the journalists/intended audience know that an author has published a new book. This usually contains quotes from the artist and the publishing company, as well as the main news that a book has been published. This is what the style of this press release page looks like. 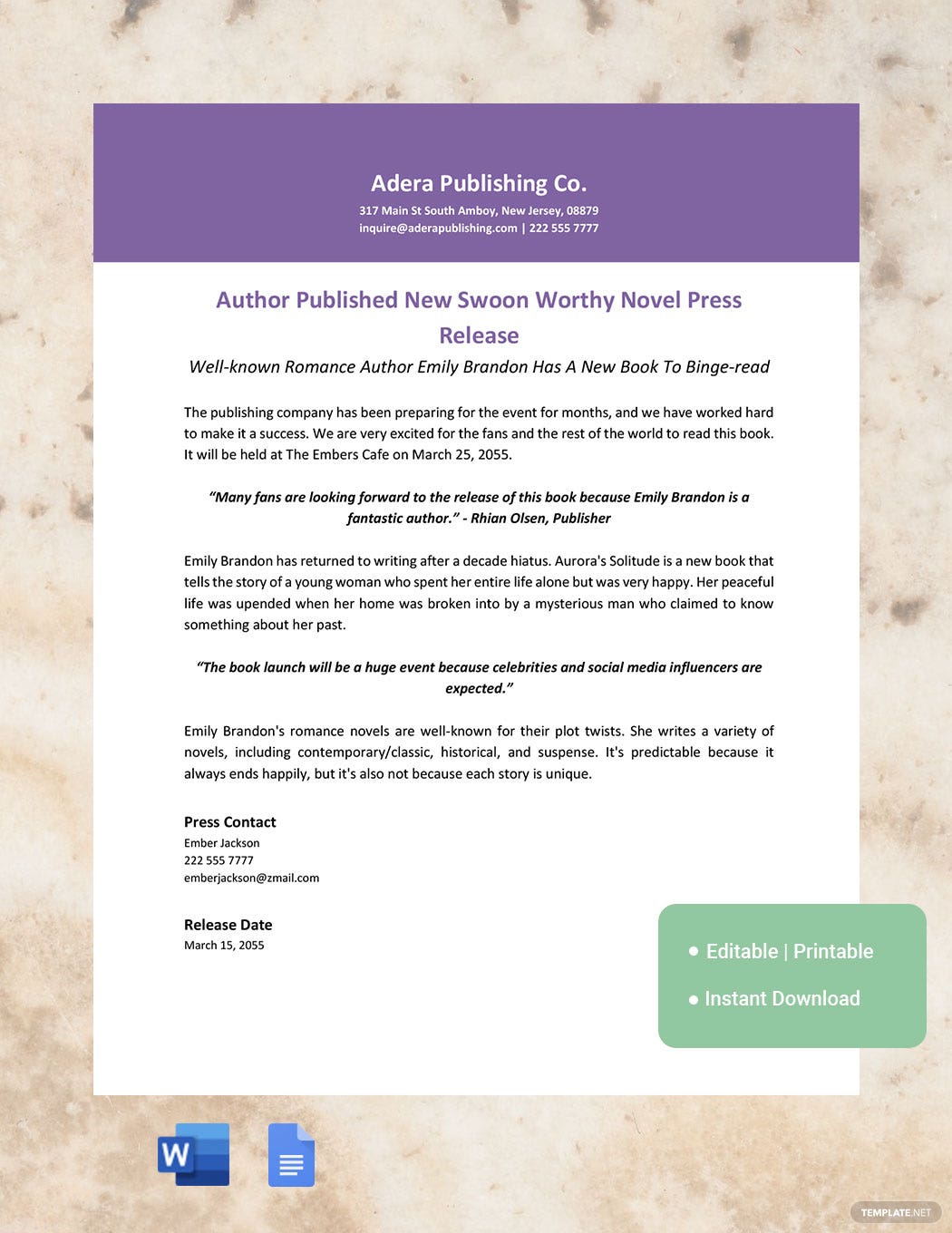 Where does the quote go in a press release?

A quote in a press release is usually inserted in the second or third paragraph and should be written in AP format.

What sort of picture should be in a press release?

The sort of picture that should be included in a press release should be eye-catching, high in quality, and relevant to the topic.

What do journalists look for in a press release?

Aside from the title, the most important elements that the journalists will look for in a press release document are the multimedia assets/effects such as pictures and graphics, contact information, and company background.

What is press release dissemination?

Press release dissemination refers to the process through which specific news contents are articulated and received by the public and audiences.

How to create a press release for a small business?

The tips that need to be followed to create a press release for a small business include following the proper format, making an eye-catching headline, being succinct with the story, finding the right angle to cover, personalizing the press release document, and making use of quotes.

What makes a press release newsworthy?

A press release is deemed to be newsworthy when it addresses issues that the audiences are facing and demonstrates why the customers and the press should care about the document.

What is the goal of a press release?

The main goal of a press release is to get coverage and get noticed by the target audience.

Who is responsible for writing a press release?

The responsibility for writing a press release generally falls on the PR department of a company.

What is a press release for a book?

A press release for a book serves as a formal announcement sent to media organizations and public forums to notify people about a new book and generate engagement.

What type of communication is a press release?

A press release is a type of written communication that reports specific but brief information about an event or a circumstance.

What is the point of a press release?

The point of a press release is to garner attention, make news, and generate publicity.

What is a dateline in a press release?

The dateline in a press release serves to indicate where and when the event took place.