Amendment contract making has been made easier with the help of our 100% customizable, printable, easily editable, and high-quality templates. The best thing about our amendment contract templates is that they are all ready to use and downloadable in all formats of Google Docs, MS Word, and Apple Pages. By downloading our templates we assure you that they are all professionally crafted in order to make it more convenient to use. Feel free to customize our templates which is pre-formatted already and requires a minimal amount of editing. Our quick and time-saving Amendment Contract Templates are made available for you in different sizes to better match your preferences. Let us assist you in your contract making by clicking the download button right now!

What Is an Amendment Contract?

How To Write an Amendment Contract? 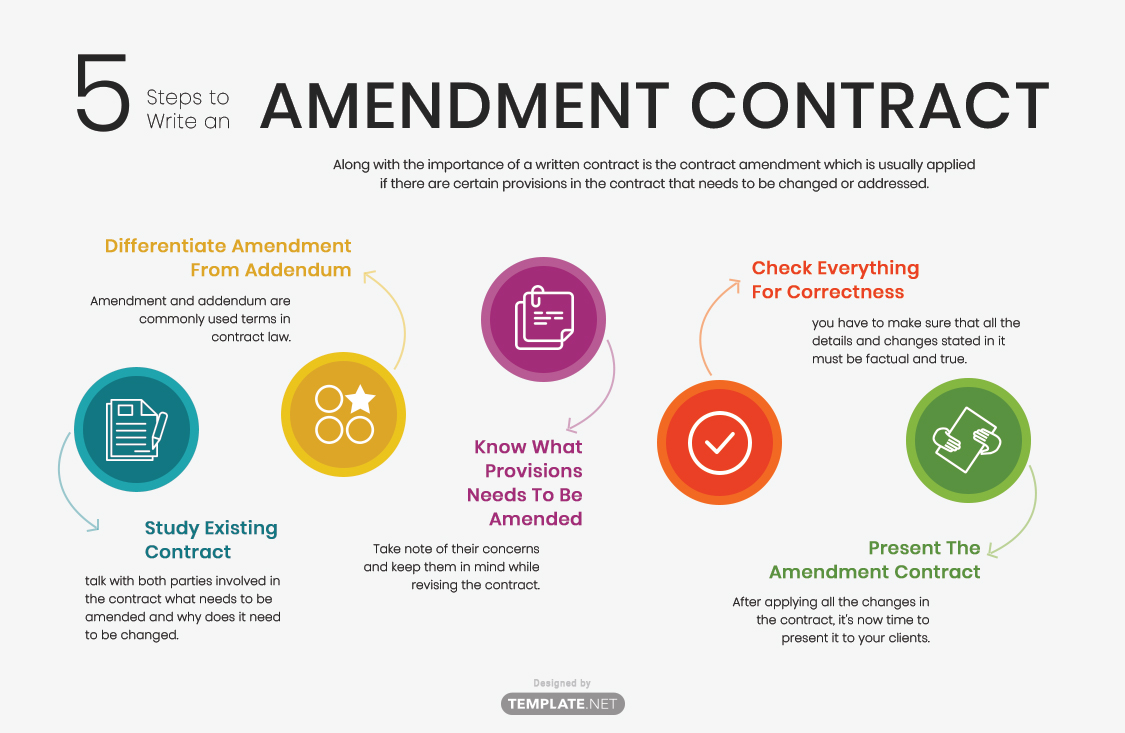 Written contracts play a vital role in everyday negotiations. Along with the importance of a written contract is the contract amendment which is usually applied if there are certain provisions in the contract that needs to be changed or addressed. All forms of negotiations where a contract is involved may be amended such as employment contracts, residential lease, purchasing and partnership agreement contracts, construction agreement, and services contract. In general, contracts are considered legal documents, which only means that it needs to be formal and credible. We have provided a simple step-by-step guide below that might help you in your amendment contract making.

The first step to successfully make an amendment in the sample contract is to read and study it first. If possible, talk with both parties involved in the contract what needs to be amended and why does it need to be changed. Making amendments for legally binding documents such as this is not an easy task to do. You may opt to let both parties involved sign an amendment form in order to make the process formal.

When making an amendment contract, you have to take note of the basics. Amendment and addendum are commonly used terms in contract law. Basically, the amendment means any alteration or revision of an existing document. And contract addendum, on the other hand, does not fully change the contract, it only adds to it. Take note of this and don't be confused when using them for your simple contract making.

3. Know What Provisions Needs To Be Amended

After successfully differentiating the important terms used in an amendment contract, it's now time to make the revisions. The best option to do this is to meet with both parties involved, talk with them properly what certain terms or provisions in the company contract do they wish to change. Take note of their concerns and keep them in mind while revising the contract.

4. Check Everything For Correctness

Since an amendment contract is a formal document, you have to make sure that all the details and changes stated in it must be factual and true. Conduct proofreading to ensure correctness. Are all the needed changes made? If you're confident that you have done everything perfectly, you may now proceed to the last step.

After applying all the changes in the contract, it's now time to present it to your clients. Evaluate and review the formal document together with them, be prepared also to answer all their queries about the contract.