Trying to create a clear independent contractor agreement just for a short period of time? Well, Template.net Pro has got your back! Utilize our comprehensively designed and ready-made Independent Agreement Templates. All these are available in all file formats including Google Docs, MS Word, and Apple Pages, as well as in A4 and US letter sizes. They're 100% customizable for your total satisfaction and great convenience. Hurry and don't miss this one-time opportunity to create the most competitive contractor agreement and give people the opportunity to do what they love without spending a lot! Download today!

How to Write an Independent Contractor Agreement? 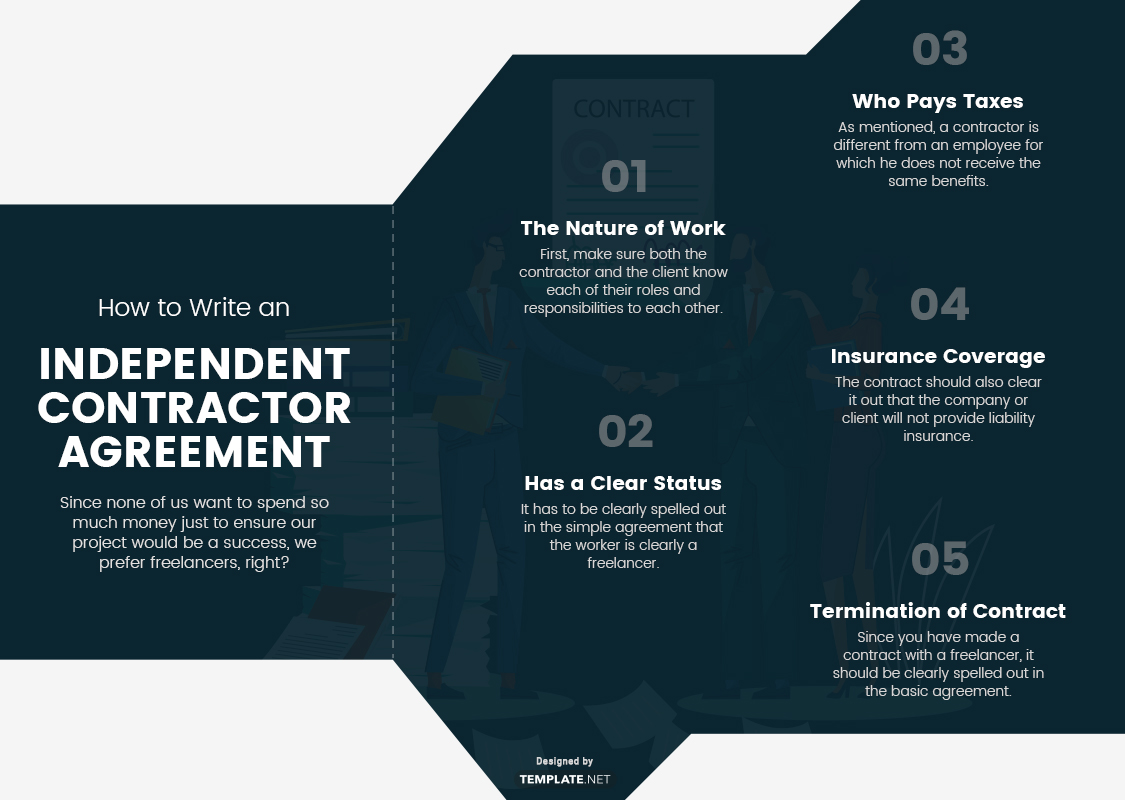 Since none of us want to spend so much money just to ensure our project would be a success, we prefer freelancers, right? In which case, we must make an Independent Contractor Agreement comprehensive. Here are the things you need to include in the agreement to clearly set proper expectations with your contractor.

1. The Nature of Work

First, make sure both the contractor and the client know each of their roles and responsibilities to each other; it has to be detailed and clearly understandable in your payment agreement. This should spell out the kind of work that the contractor will be doing in the production. In addition, he should also be aware of the schedule and the payment amount and terms. In terms of labor as far as the contractor is concerned, he/she should be informed about what he will be providing; when, where, and how will he do so.

2. Has a Clear Status

It has to be clearly spelled out in the simple agreement that the worker is clearly a freelancer and not an employee. In case of being sued in court because of tax avoidance (perhaps)—as per mandated for employees—at least it was legally and clearly stated in the agreement document that the worker is a freelancer; which means, you as the client have no responsibility for such taxes.

As mentioned, a contractor is different from an employee for which he does not receive the same benefits an employee receives, mentioned in the employee agreement. Specifically, a contractor will pay for his own income taxes, sales taxes, Social Security, and Medicare taxes as a self-employed individual. In which case, it should also be spelled out that the contractor does not receive a pension or retirement benefits, health insurance, vacation pay, sick pay, holiday pay, or other fringe benefits typically provided by an employer.

The basic agreement should also clear it out that the company or client will not provide liability insurance for the contractor and that he is not covered by the company's liability insurance policy. This will also be beneficial for you as the client especially that this prevents or protects your company from the danger of damaged property or injury that the contractor may cause.

Since you have made a legal agreement with a freelancer, it should be clearly spelled out in the basic agreement that the company can terminate the contract without further notice. As mentioned, this can also be beneficial especially when your contractor has caused damage to your company without needing to converse with the contractor. In such a case, whatever you said might just be used against you by the contractor.