Billboard ideas come in great, wide-ranging possibilities, especially when there are eclectic options on what to promote or design on billboards. From an automotive dealership, a medical or dental clinic, down to a celebrity beauty campaign, it helps to know plenty of cool and creative strategies on how to optimize a billboard with ideas just as big as the size of the billboard itself. 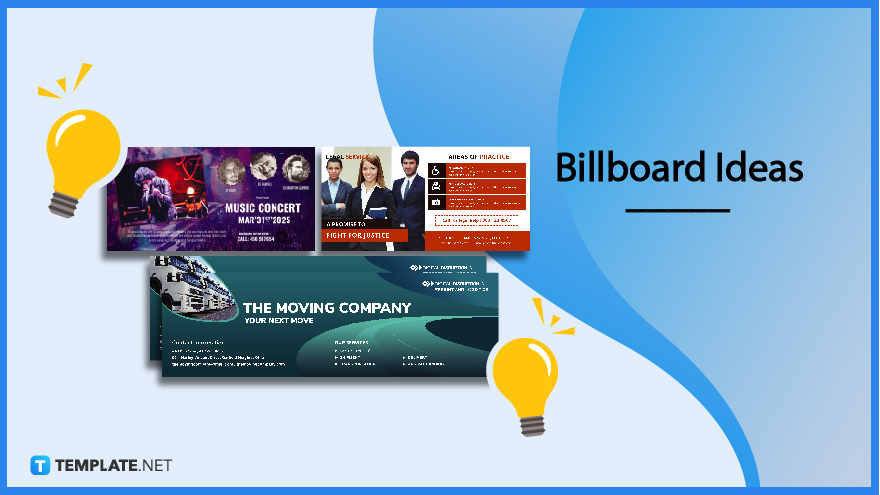 Create billboards that grab attention wherein drivers and passersby would take time in viewing or reading the billboard content. The best tip for a billboard idea is to set a theme that matches your billboard’s purpose. If you’re promoting a kindergarten to high school enrollment, then set back-to-school motifs on the billboard, for example. 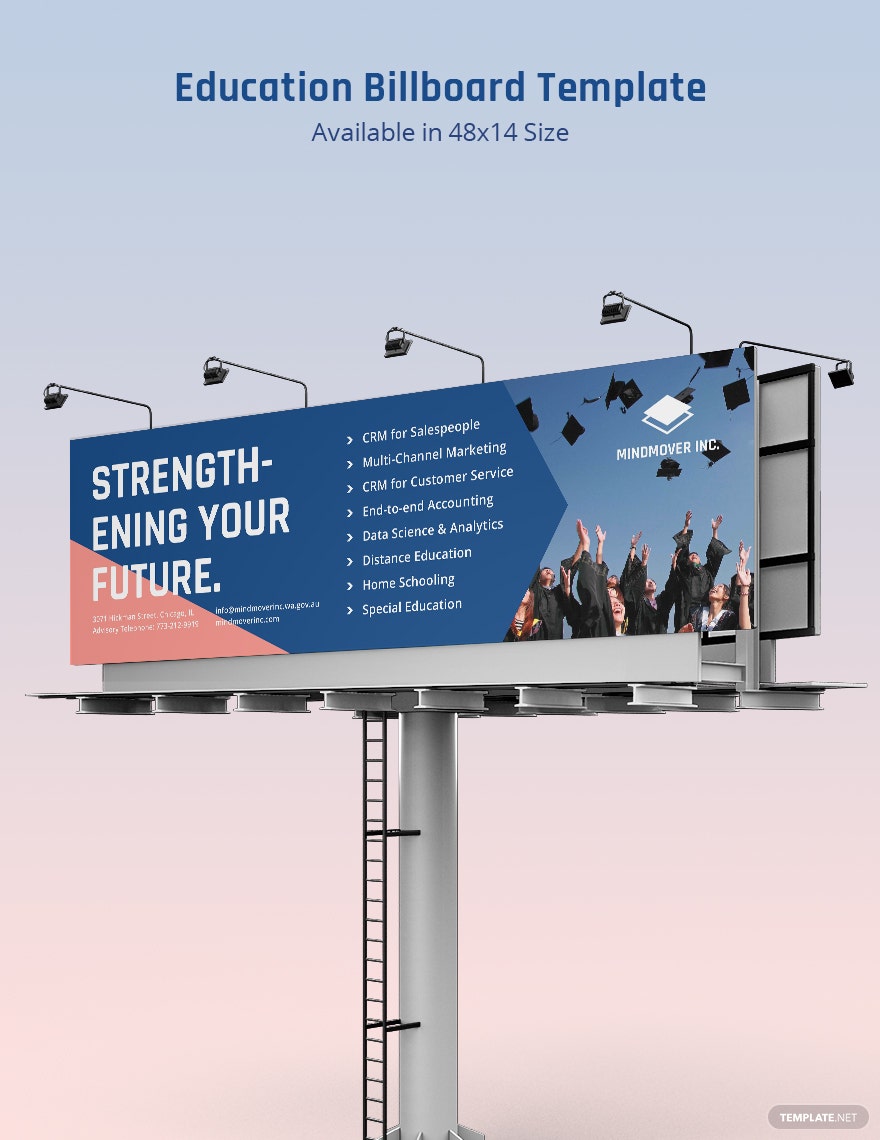 Design a salon billboard with a photo of someone who looks relaxed, carefree, or beautiful. From spa and beauty salons to hair salons, make a human connection where you want audiences to feel or look like the person on the billboard cover. To close the billboard gracefully, don’t forget a compelling CTA so nobody would think twice about booking a salon appointment pronto. 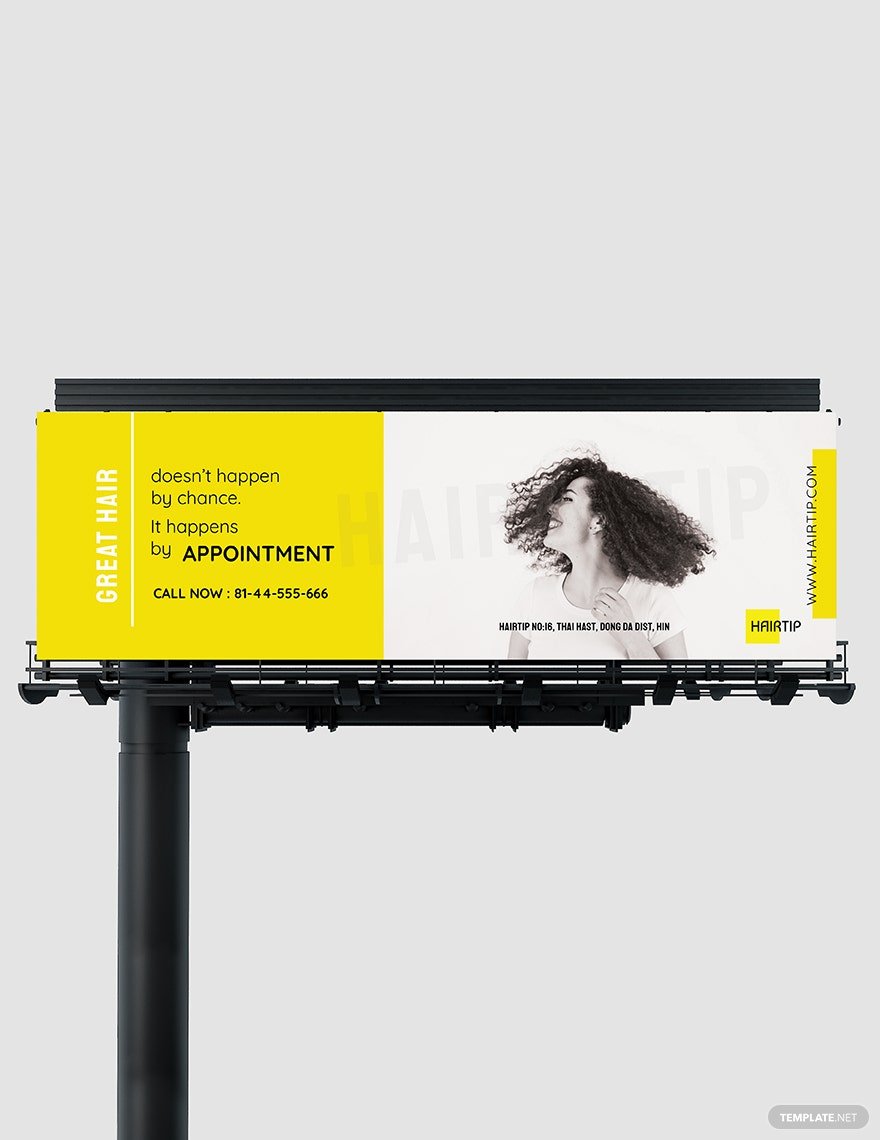 Make a change by inviting more people to a place of worship and connecting spiritually with a riveting church billboard. A church billboard helps you advertise church content such as ministry fellowships, church counseling, services, and more. You’d be surprised at how big of an audience scale you can make with a holy message as your billboard’s center. 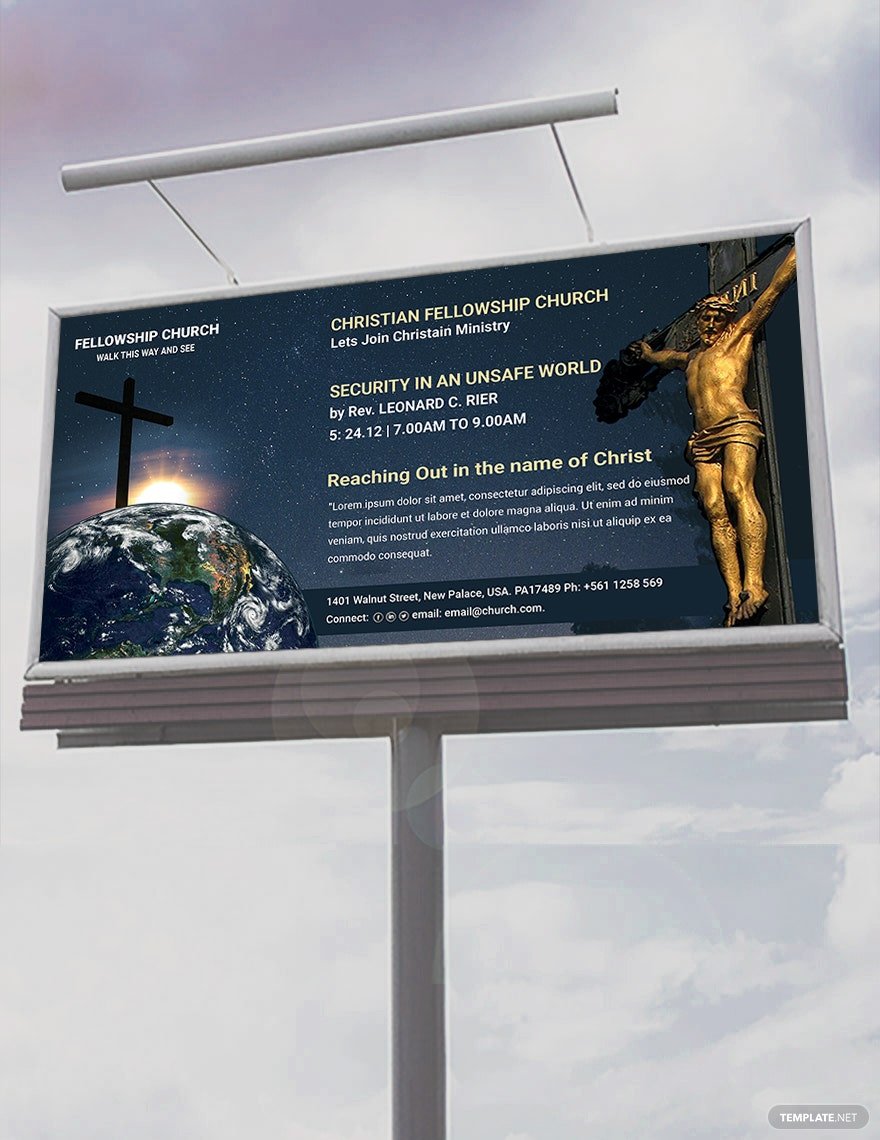 Boost your target market’s travel escapism battery by designing an inspiration travel billboard. Travel billboard ideas run from inserting a majestic travel photography element to adding a motivational message to make a person’s travel bucket list happen. You can also take advantage of mentioning the benefits of traveling and getting under the sun. 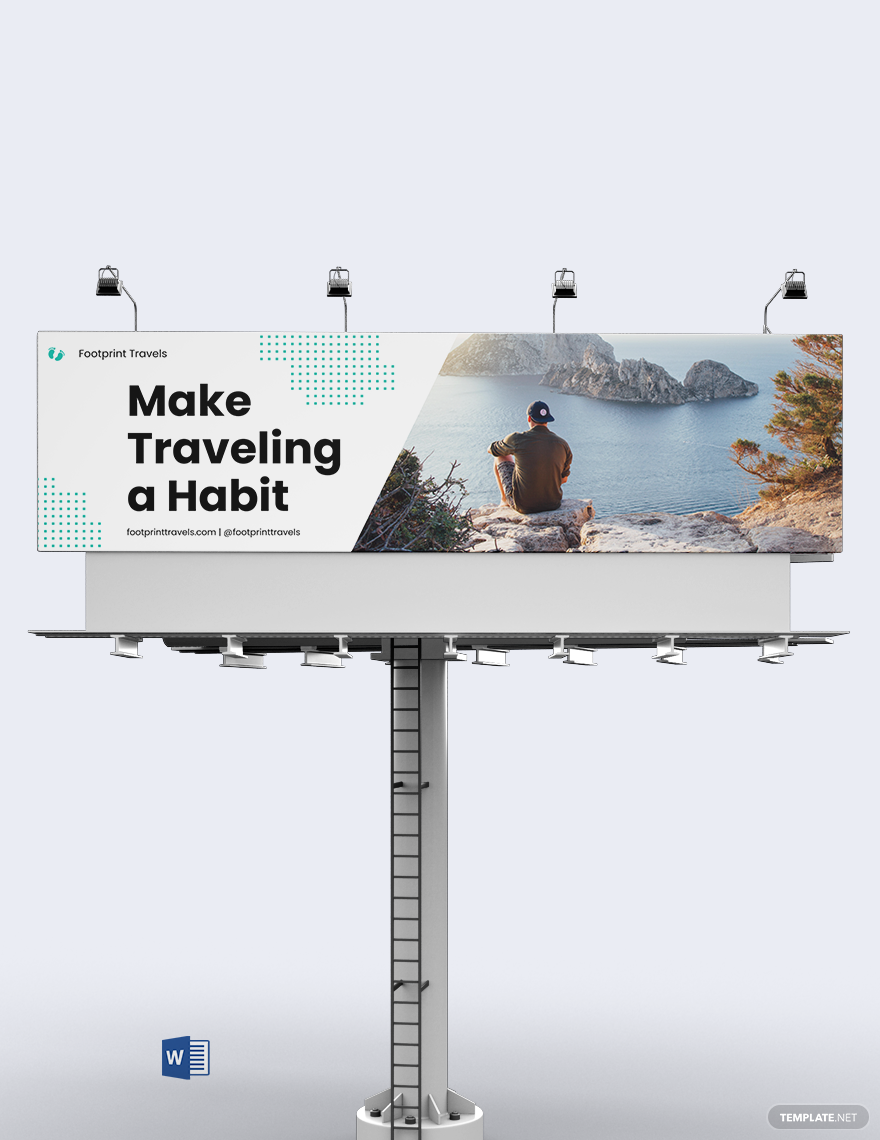 Modern, high-tech, and transformative ideas perfectly represent technology billboards. Technology in itself refers to advanced machinery or equipment so you can benefit from designing billboards with modern LED lights, video animations, and other advanced edition technological effects. Besides being new and innovative, don’t forget to still remind viewers of what you are selling on the billboard. 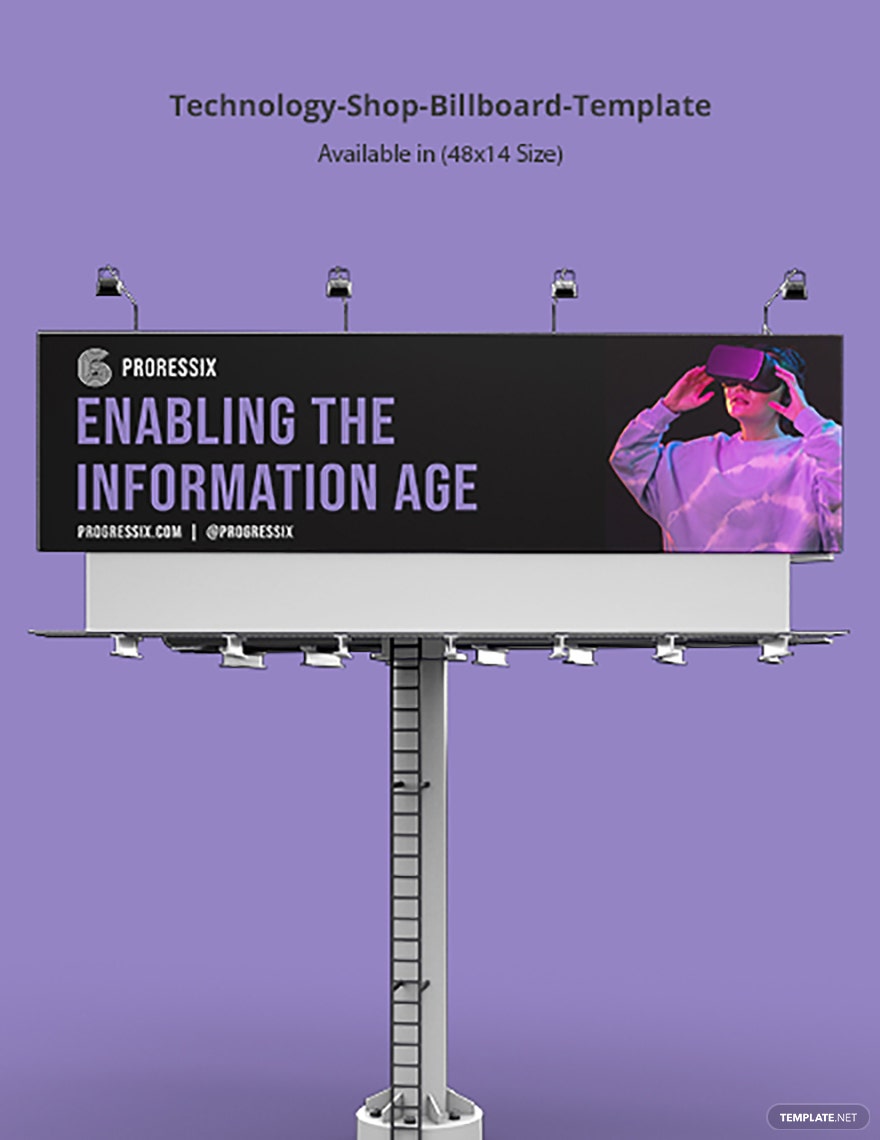 Craft an eye-catching billboard to promote your real estate business using a fair and professional real estate billboard. Whether it is spring, summer, fall, or in the middle of July, any realtor can hope for a prospective home buyer using well-designed billboards. A tip is to display a sample estate project image on the billboard and insert your estate company’s contact info; thus, clients know what to do next after seeing the billboard. 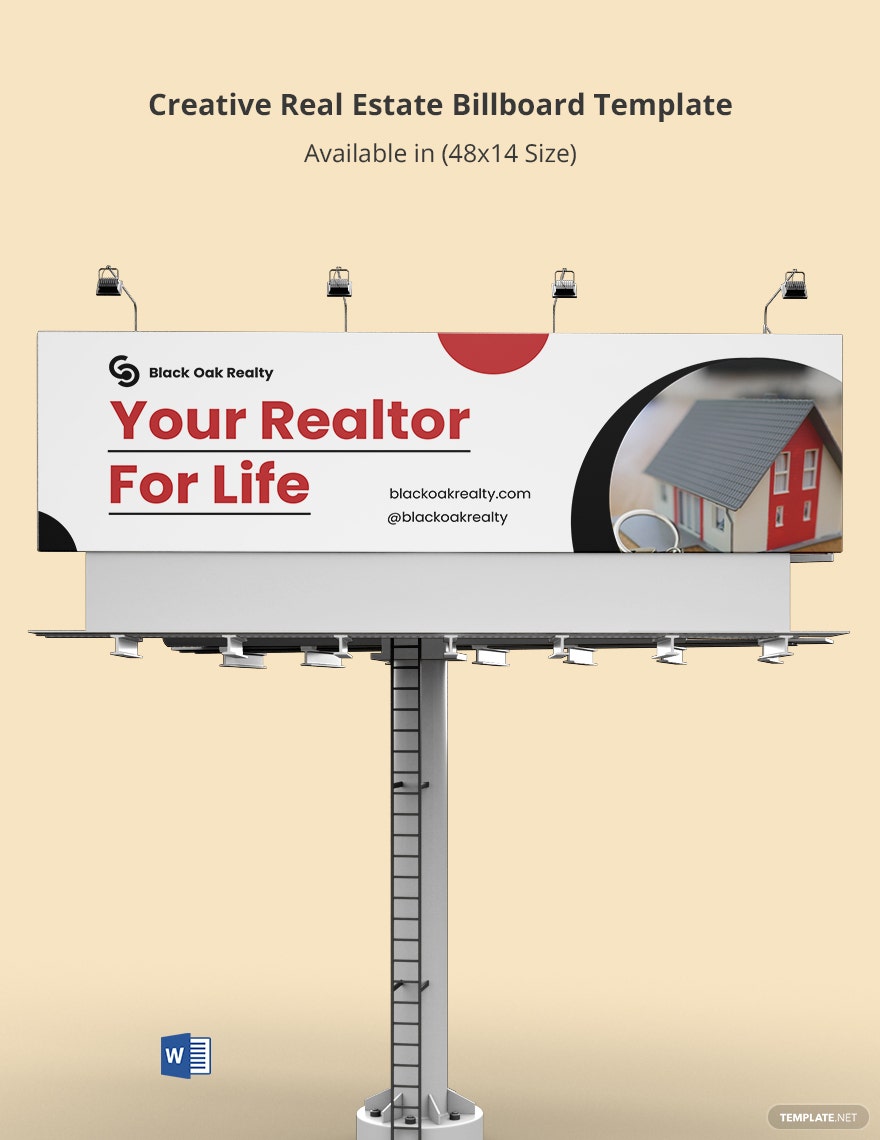 Teachers association studio, nail studio, fitness studio, artwork studio, news extension studio, adult work studio⁠—any type of studio can market with studio billboards. The general public could spend some quality time in your studio when you highlight your studio’s products, services, and packages on a printable or digital billboard. Most importantly, leave a message on how customers can contact your studio. 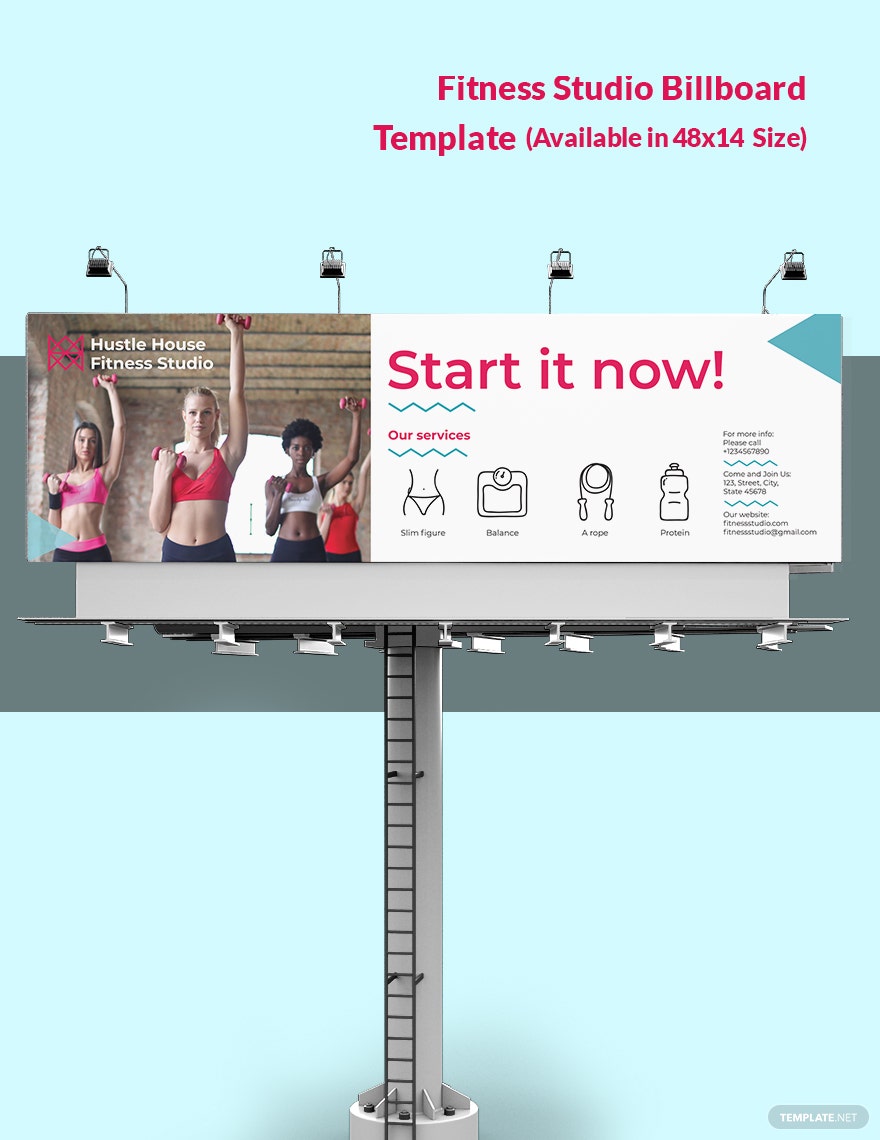 A product billboard has a very simple rule: sell your product. The product you are advertising should be evident in the billboard design whether it is a restaurant coffee display, clothing piece, Instagram accessory, or any item. However, you must showcase the product with presentable elements wherein you can drive audiences to own the product.

Musical instruments, song charts, music festival vibes, concert stages, and any other memory you have about music are the most fitting elements to insert for music billboards. You can even match the vibes of your music billboard according to the type of music you are promoting such as black-and-white and metallic aesthetics for a rock-and-roll concert. Your music billboard’s delivery is effective when people can automatically identify that it is about music. 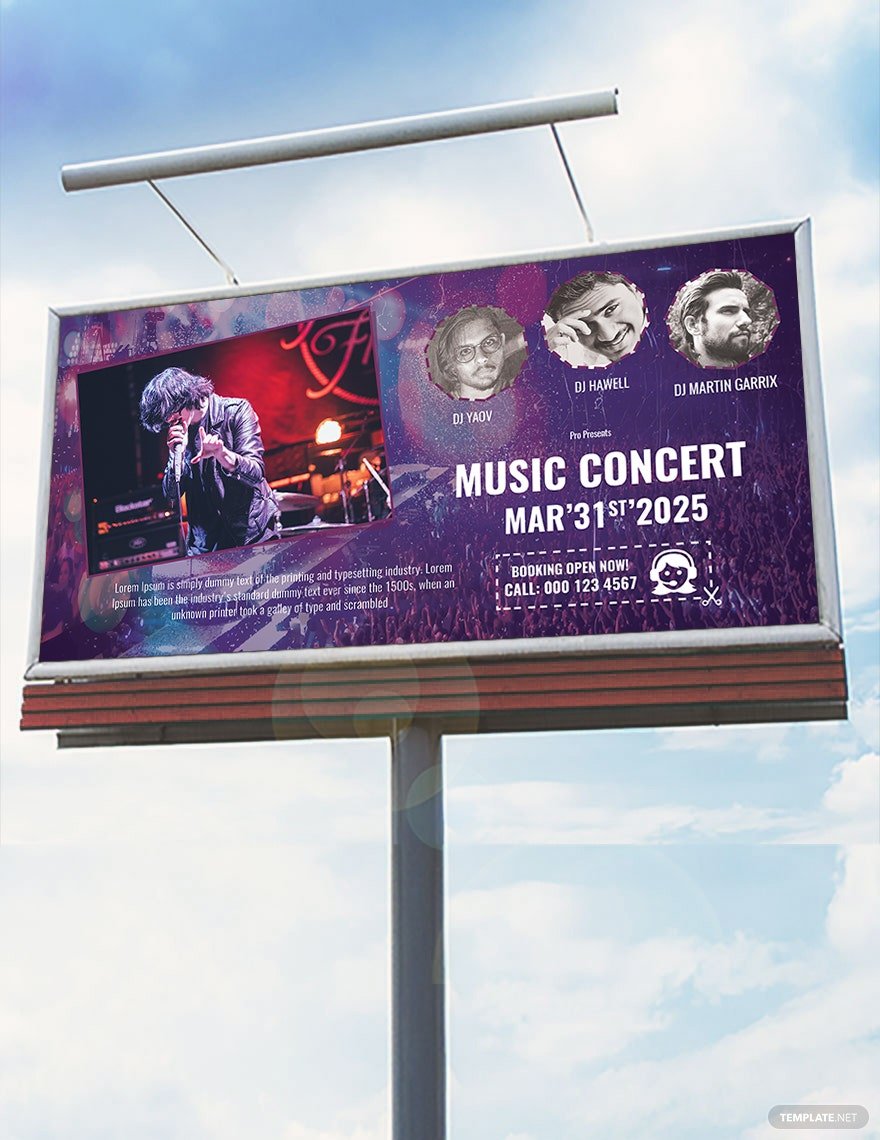 Whether billboards are placed on a highway, airport, or any high-traffic area, you can still inspire people to work out and get physically fit with fitness billboards. Any fitness-related ad can be promoted on the billboard such as a workout classroom, gym equipment, or a yoga studio. In terms of the billboard design, motivate people with physically fit models, high-end gym equipment, and other gym-related aesthetics. 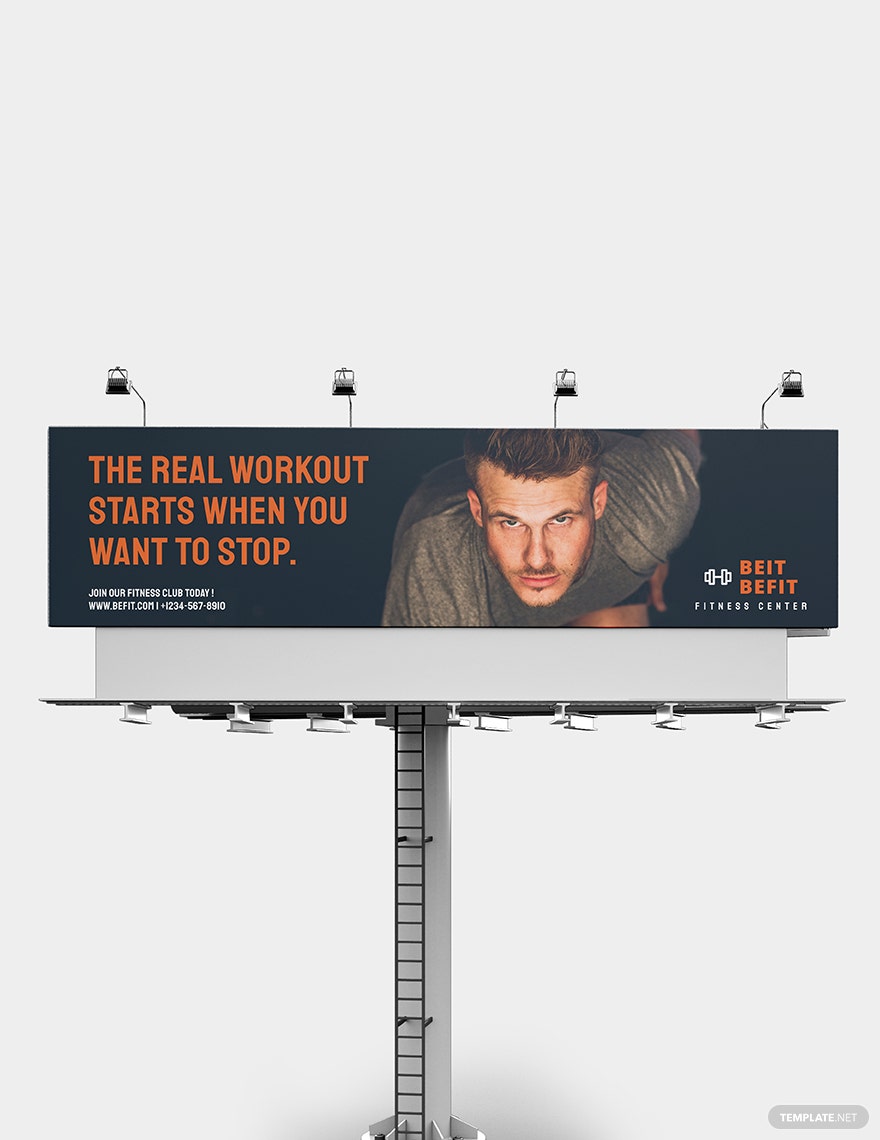 What should be on a billboard?

How do you make a good billboard?

A decent billboard is when you can tell an interesting story, add something memorable, share a clear call-to-action statement, and market a product or service by just looking at the billboard.

How effective is billboard advertising?

Billboard advertising is highly effective that according to a research conducted by the Arbitron National In-Car Study, 71% of US citizens consciously watch billboard ads upon driving.

What color should a billboard be?

Going bold is the key to coloring your billboard including black, white, blue, red, and yellow so that it will be hard to miss even at farther distances.

Are billboards worth it?

Billboards are certainly worth it when it comes to boosting your brand awareness and promoting your product, service, campaign, or company to busy areas with lots of people.

What factors do you need to consider when designing a billboard?

If done right, billboard advertising helps local business growth a lot such as promoting your business to a high-traffic location until more people would recognize your enterprise.

What are the important elements of a billboard?

Significant billboard elements include a brief design, contrasting colors, brand awareness strategy, and originality for people to remember your brand.

Why are billboards important?

Billboards are important to promote anything that would be seen by a huge number of people, thanks to their king-size feature that would be difficult to miss even at a farther distance.

What are the benefits of a billboard?

Billboards have big sizes for easy visibility, are displayed in high-traffic locations to cater to diverse target audiences, improve brand awareness, and come in a variety of sizes and designs.

What makes an attractive billboard?

What are some good billboard ideas?

Some highly recommended billboard ideas are using witty slogans, inserting visually pleasing graphics, adding humor to the billboard design, and focusing more on showing a story rather than telling the story.

What is the purpose of a billboard?

Billboards are meant to market your business, campaign, product, or service to a huge audience and to increase brand awareness.

Why are digital billboards effective?

Digital billboards are effective not only to be seen but also to grab attention because they usually involve moving images, striking lights, and technological displays instead of the steady, printed billboard.