Columbus Day is one of the major holidays in the United States that commemorates a historic event. Whether you’re an American citizen or simply someone who loves studying history, Columbus Day is a holiday that should interest you. 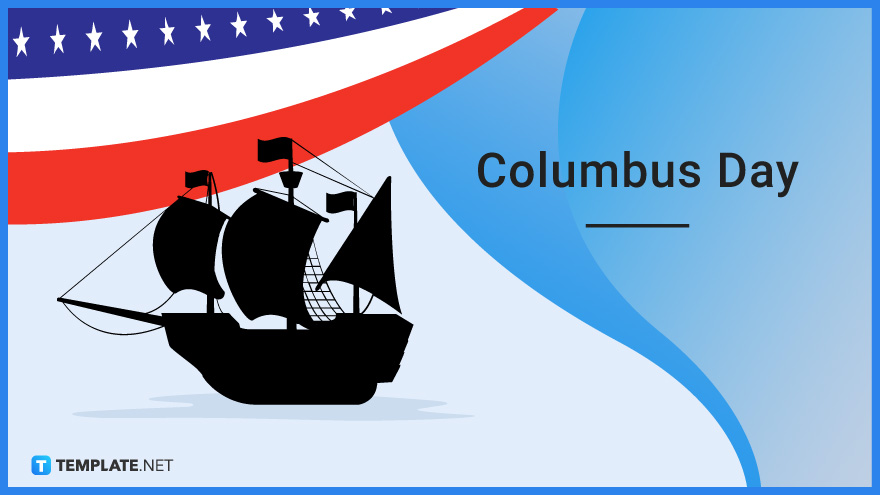 Columbus Day is a federal holiday in the United States commemorating the day Christopher Columbus arrived in the Americas in October of 1492.

Columbus Day is a national holiday in multiple countries, particularly in the Americas, and marks the anniversary of Christopher Columbus’s landing in the “New World.”

When Is Columbus Day?

Columbus Day is to be celebrated annually on the second Monday of October as stated by the Presidential Proclamation (PL90-363) in 1971—the year Columbus Day became a legal federal holiday. In 2022, the event falls on October 10 (Monday).

Columbus Day landed in the Americas in 1492. His arrival on the continent was commemorated by European higher-ups through private gatherings in the years that followed. Fast forward to 1937, Columbus Day was announced as a federal holiday and is still observed in present times.

Columbus Day has sparked some controversy over the years. Some people believe Columbus Day shouldn’t be celebrated because Christoper Columbus was no hero and that he abused the natives and indigenous people. Though those claims are based on hard facts, there are also valid reasons why Columbus Day is an important occasion.

Columbus Opened the Americas to the World

The world wouldn’t have known about the Americas if Christopher Columbus hadn’t arrived there in October 1492. His arrival in the “New World” enabled the Americas to be connected with the rest of the world. Countries in Europe then established relationships with the Americas which led to some economic progress.

Christopher Columbus is not a perfect individual, but his voyages made a huge impact on exploration. He proved that successful overseas travels and building settlements in other nations are possible even with the limited technology during his time. Christopher Columbus also inspired other prominent explorers such as Ferdinand Magellan.

Though his first voyage was financed by Spanish royalty, Christopher Columbus is of Italian descent born in Genoa, Italy. Because of that, he is considered a catalyst for the start of the Italian-American heritage. Italian-Americans in the United States see Columbus as an icon. They celebrate Columbus Day commemorating their heritage’s arrival in the Americas.

On Columbus Day, some streets in the US will have parades and fairs participated mostly by Italian-Americans celebrating their heritage. Schools, businesses, government offices, post offices, and banks are closed. Furthermore, native people and supporters of indigenous groups will honor the memory of the Native Americans abused by Columbus. They have their own celebration called Indigenous People’s Day which is in protest of Columbus Day.

How to Create a Columbus Day Social Media Post

Social media is an effective platform to share just about anything. So if you wish to remind people of Columbus Day, do so on social media. You can get started today by creating a Columbus Day social media post following these guides.

Our Editor tool houses plenty of clip art that you can insert into your post template. Just open the Graphics panel and browse through the different categories. For a Columbus Day post, we recommend that you insert clip art of ships. To find them,  type “ship” in the search box of the Graphic panel. Click and drag the clip art to the template.

When all the edits have been done, save your post draft. Click the button in the upper right corner of the Editor page and select Save. Keep your post draft for now and upload it to Facebook on Columbus day.

Set an Instagrammable background photo for your post. To find a good photo, go to the Background settings panel, select See All in the Photo section, and search for free Christopher Columbus photos under Unsplash. You can also find more on Google, download a photo, upload it via the Uploads tab, and click it to set it as background.

Don’t hesitate to add more clip art if you want. Open the Graphics panel and look for relevant clip art such as digital drawings of compasses or ships. Just click and drag the clip art to the template.

Open the Fill panel and write your quote, message, or greeting in celebration of Columbus Day. As much as possible, keep it simple and brief so that it’s easier to read.

When you’re finished customizing, click the button in the upper right corner and select Save to save your post draft. You can upload it to Instagram on the second Monday of October, Columbus Day.

1. Select from any of our Columbus Day Whatsapp post templates.

2. Type in your Columbus Day message.

After you’ve chosen a template and opened it on our Editor page, you can start writing your Columbus Day message. Go to the Fill panel and simply customize the content of the Fill Text boxes.

3. Customize the background color of the Whatsapp post draft.

If you don’t like the current background color of the template, you can change it. Head to the Background settings panel, click See All under the Colors section and choose a color in the rows of Default Colors.

You make your Whatsapp post even livelier by inserting Columbus Day photos. Go to the Uploads panel and click the Upload Your File button. Select a photo from your desktop computer and upload it to our Editor page. When it’s uploaded you can attach it to the post template.

Last but not the least, save your Columbus Day Whatsapp post draft. Open the Recommended pop-up menu and select Save.

These are some of the most prominent traditions in Columbus Day celebrations:

Columbus Day is a US federal holiday and a national holiday in some countries celebrating the day Christopher Columbus arrived in the Americas in October 1492.

Memorial Day is an annual occasion in the United States dedicated to mourning American military personnel who died in service; it’s also a US federal holiday.

If you plan to celebrate Columbus Day this year, now’s a great time to prepare for it. We can help you by sharing with you our Columbus Day ideas and examples.

You can add these activities to your Columbus Day to-do list:

Listed below are some of our best Columbus Day templates and examples. Check them out now and don’t forget to download them if you like them. 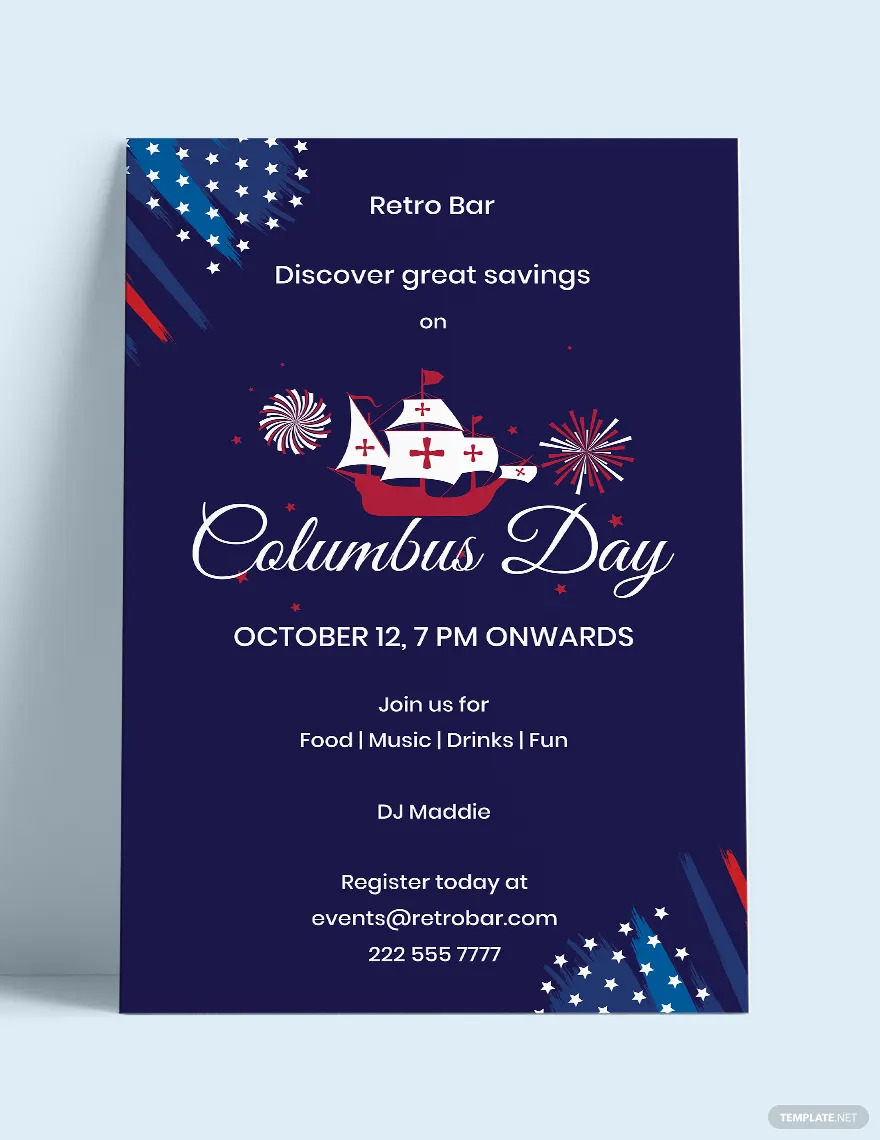 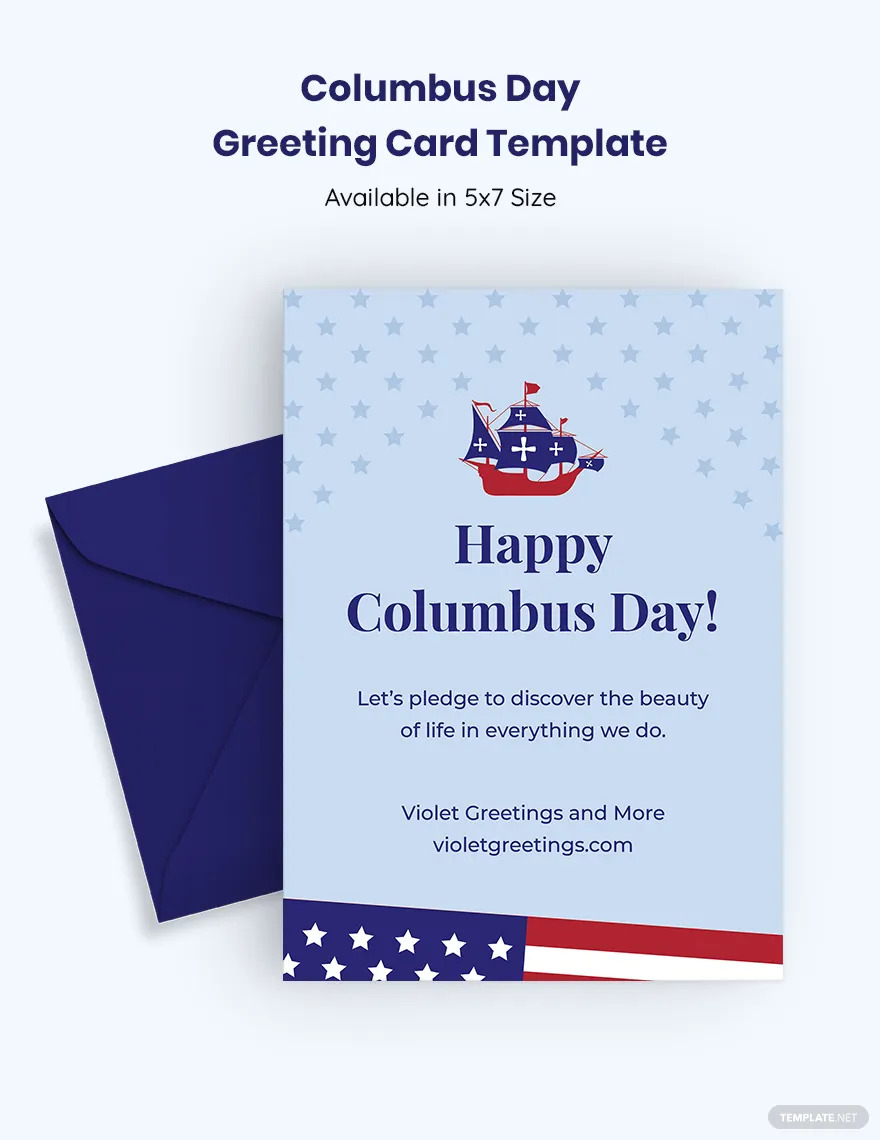 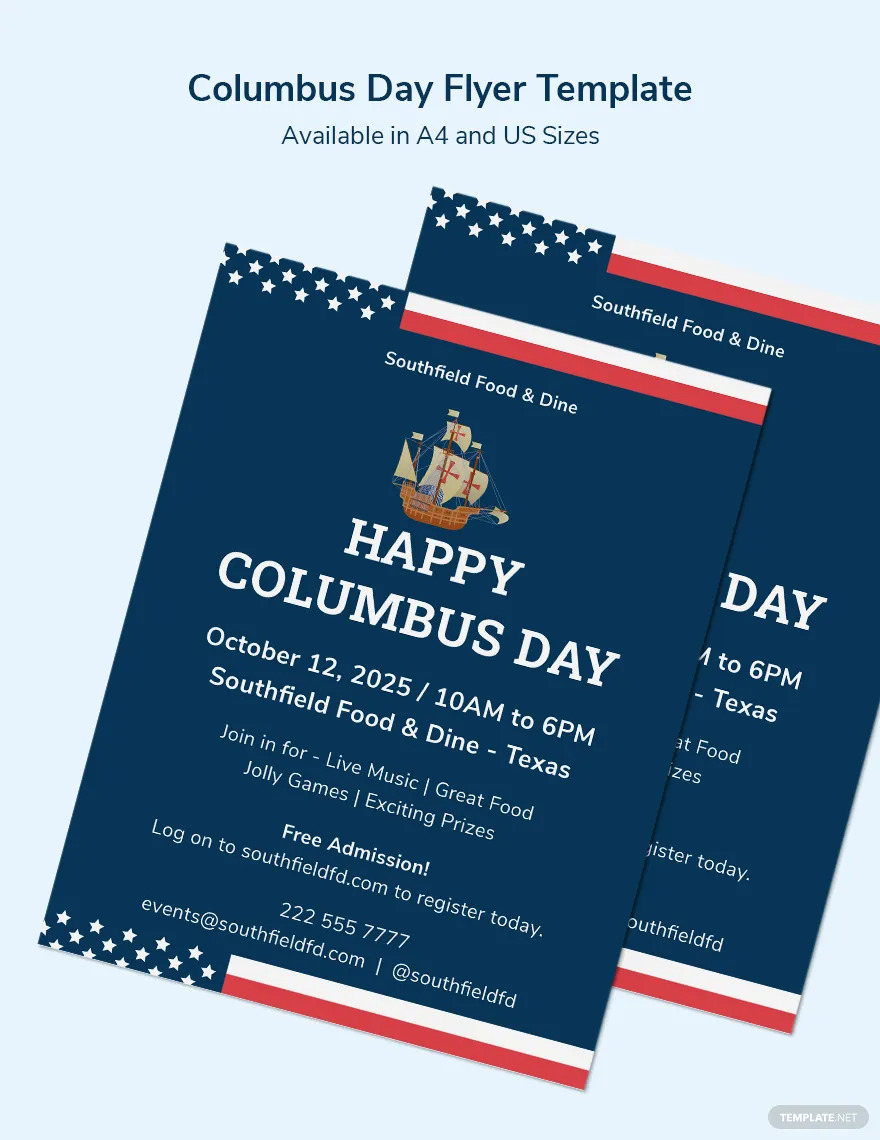 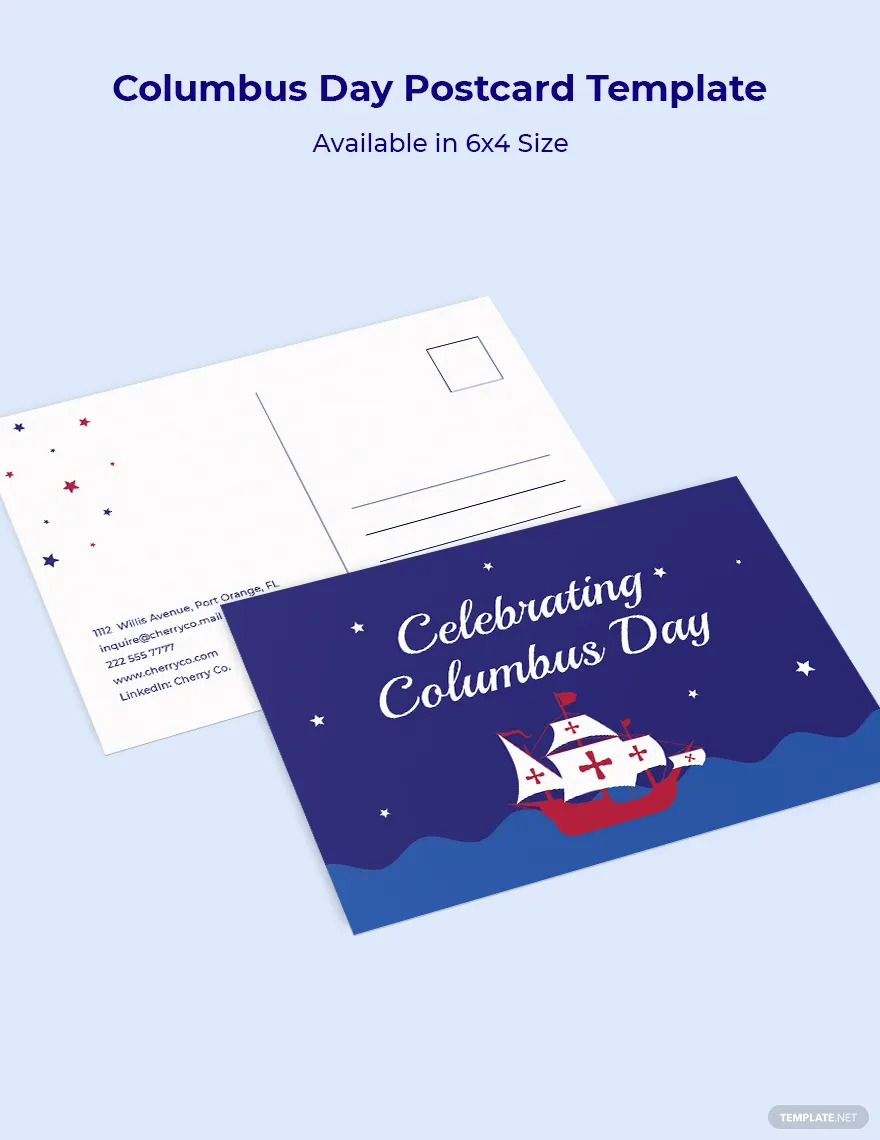 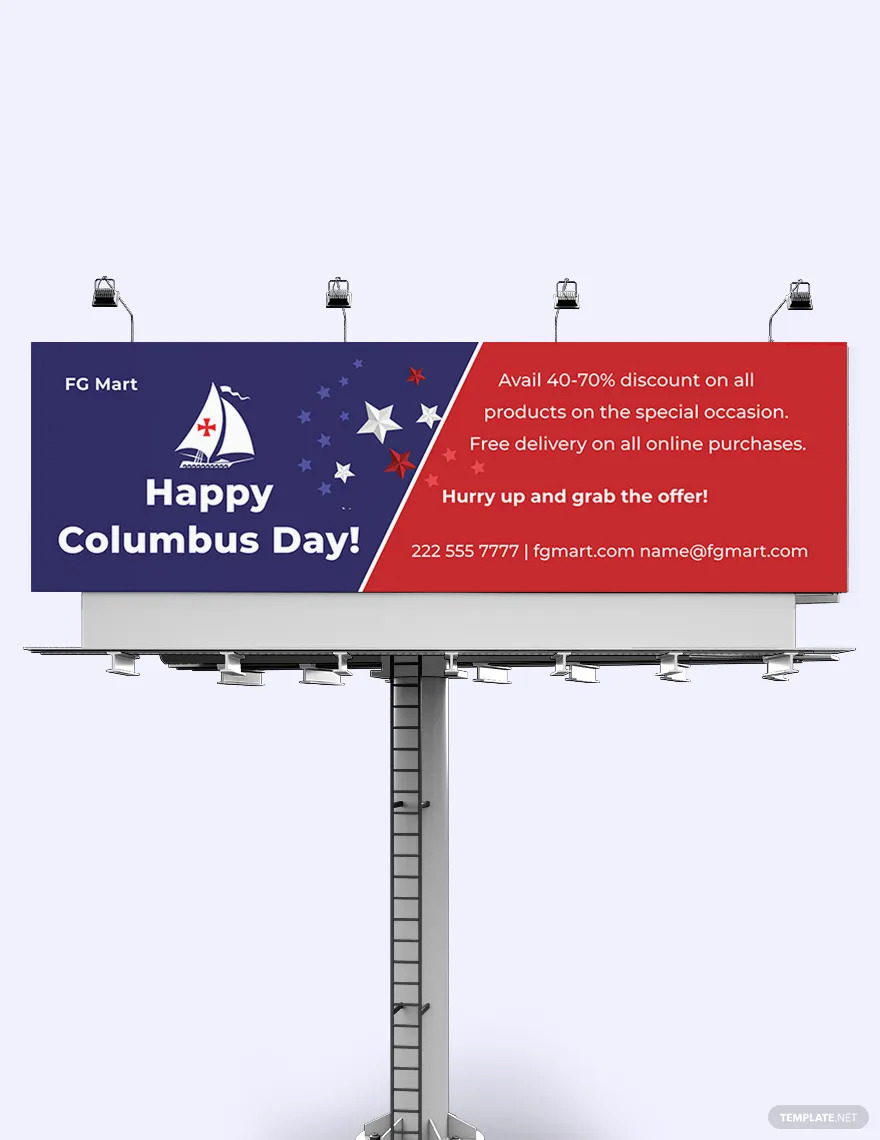 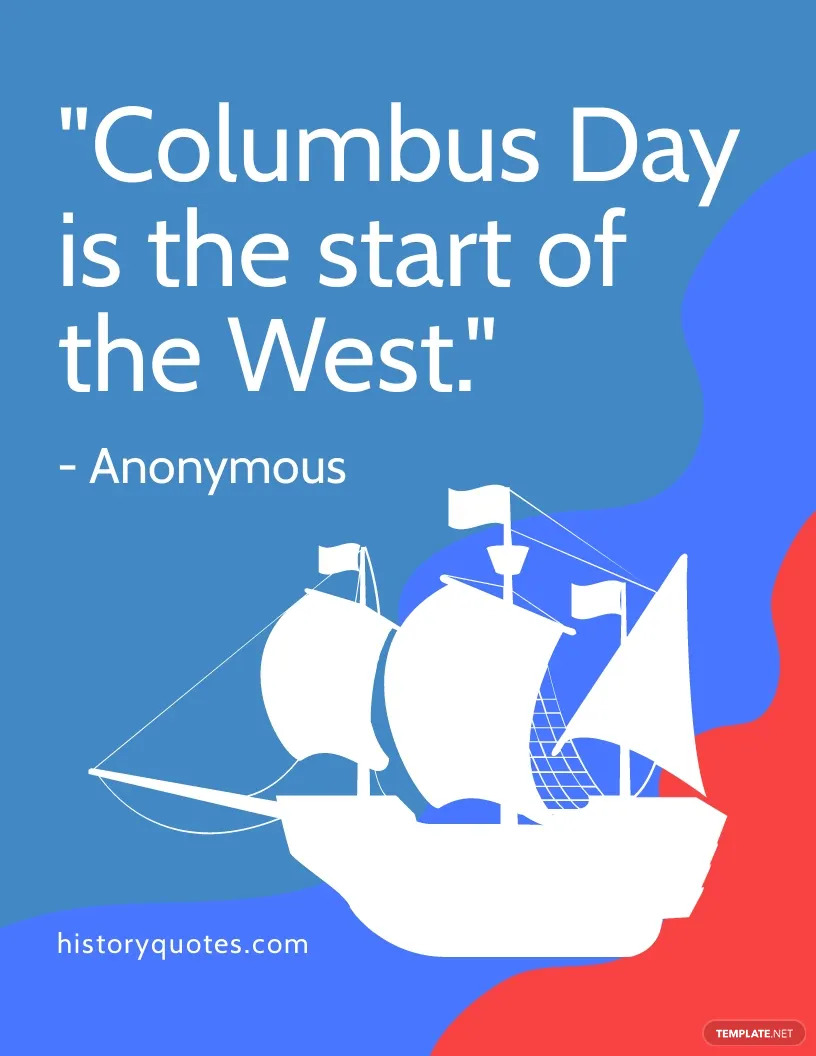 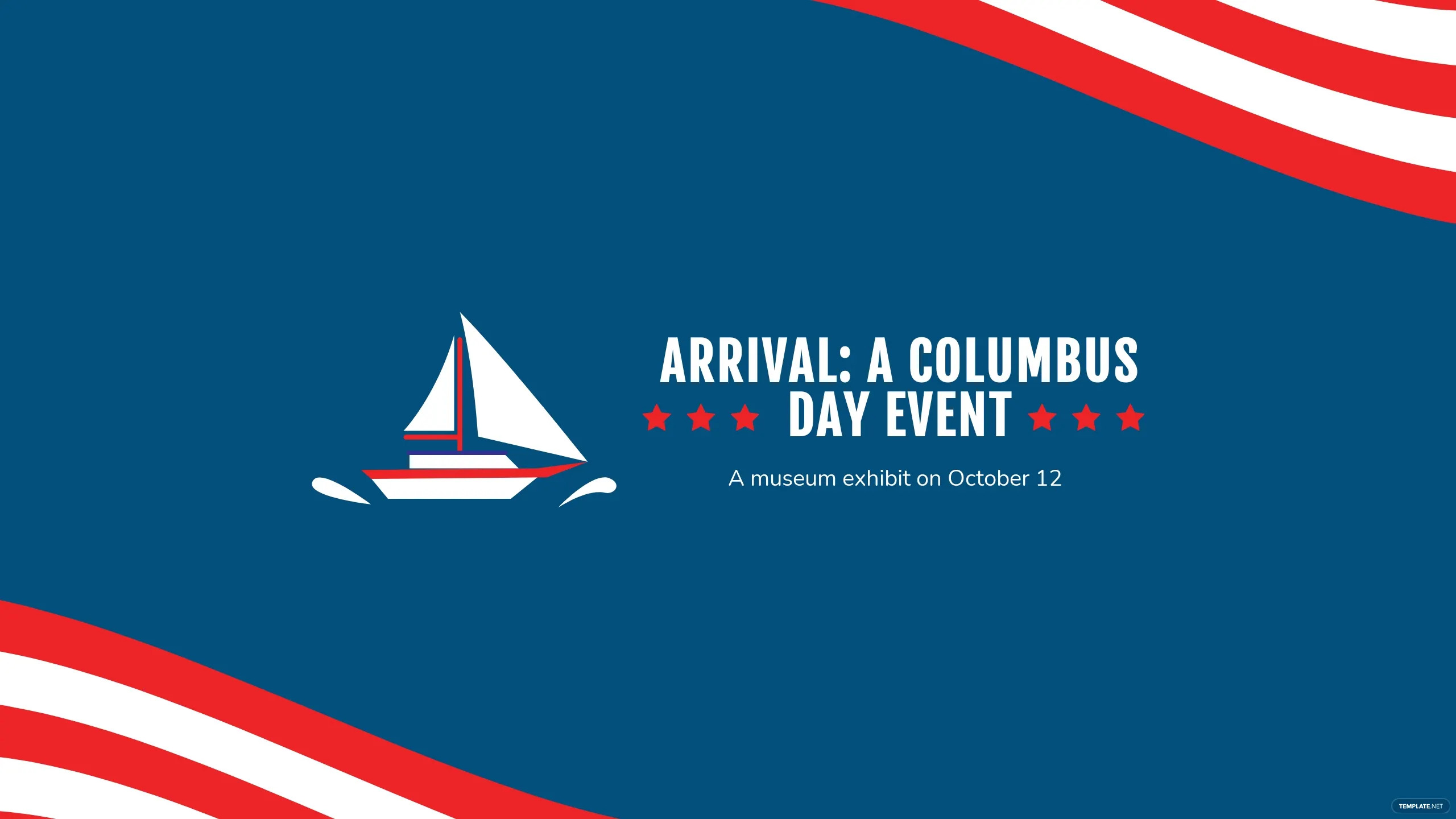 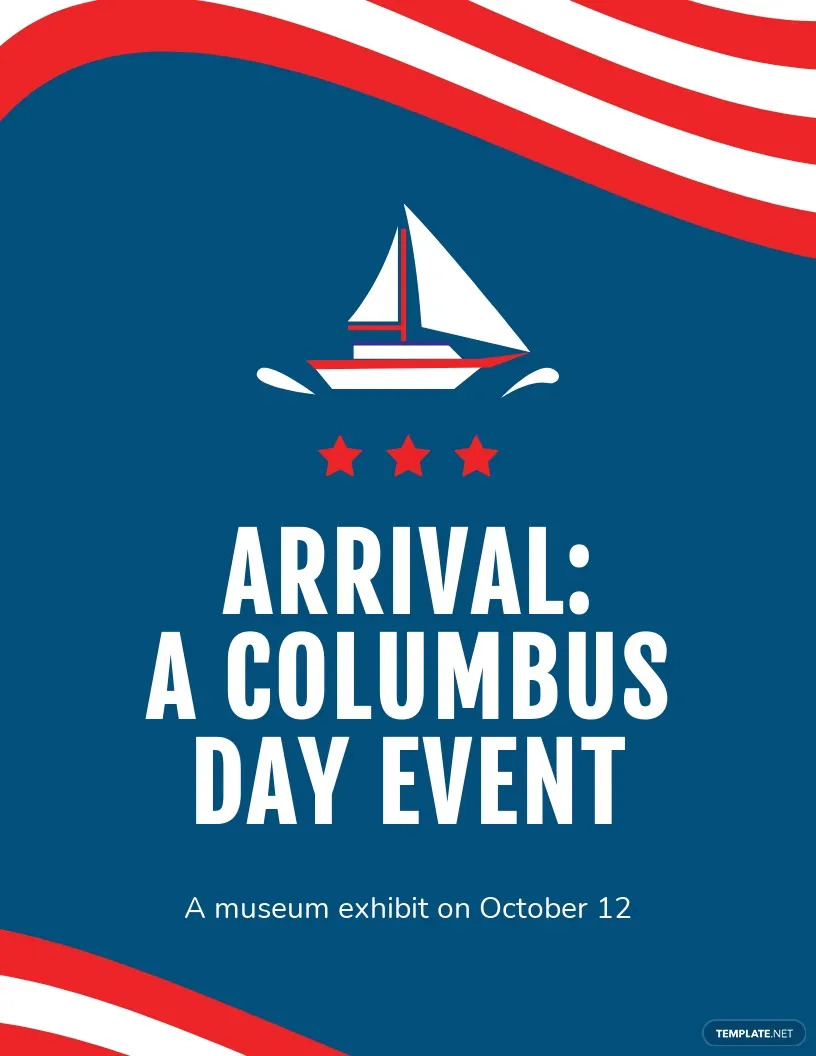 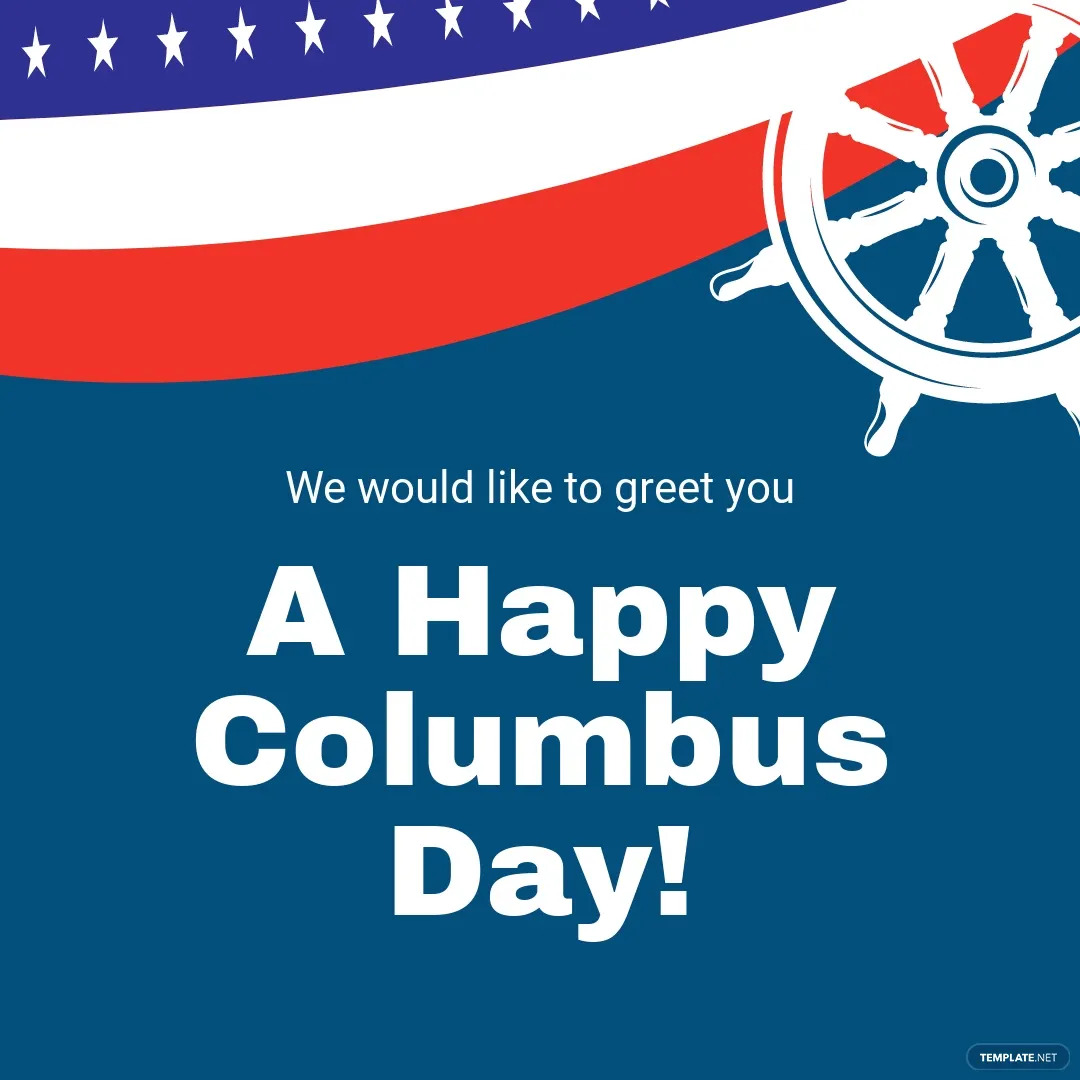 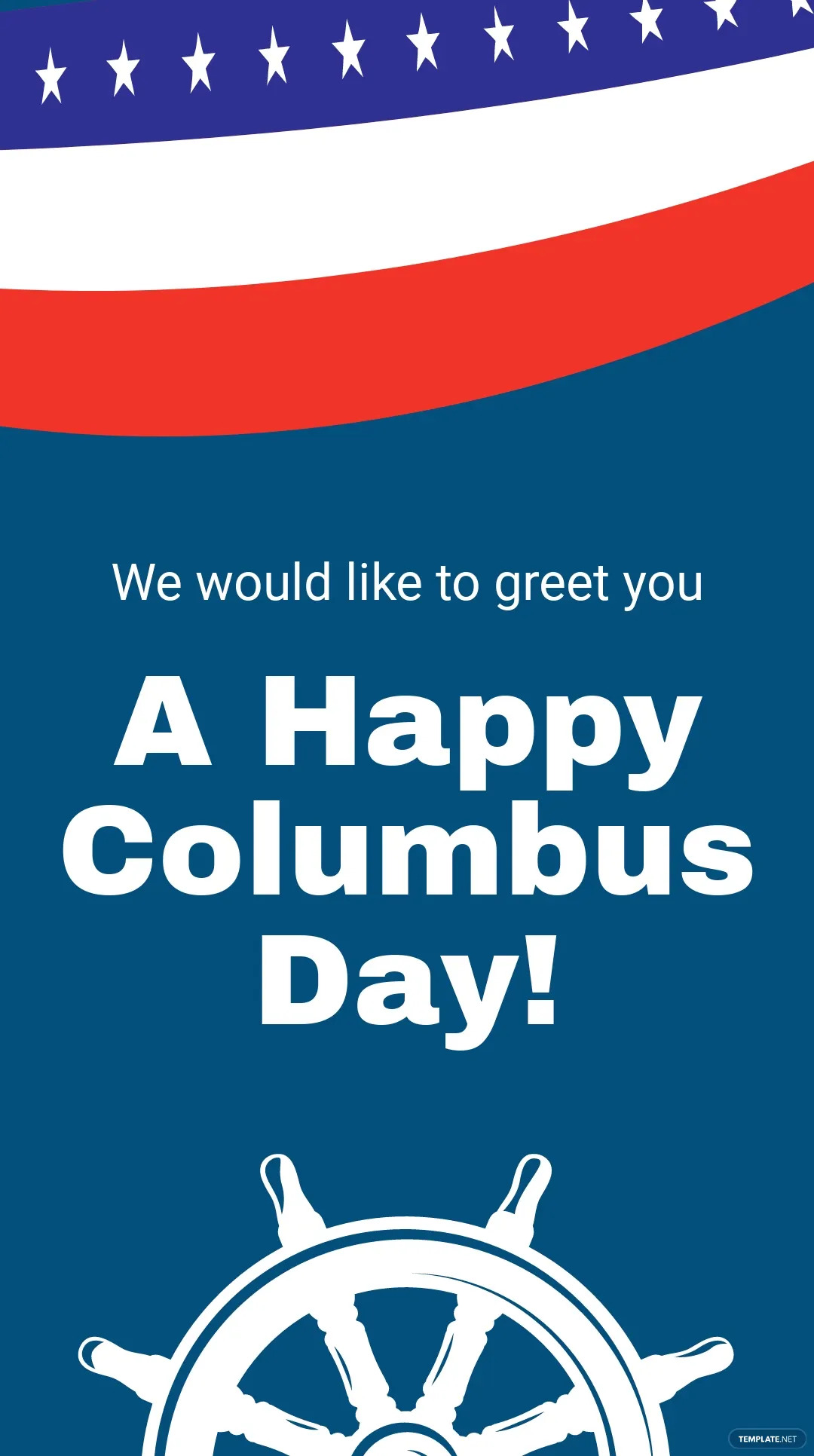 Why do we celebrate Columbus Day?

We celebrate Columbus Day to commemorate the historic arrival of Christopher Columbus in the Americas in October 1492.

When did Columbus Day become a federal holiday?

Columbus Day was declared a federal holiday in 1971.

Why is Columbus Day a problem?

Columbus Day is quite a controversial holiday because some people don’t consider Christopher Columbus a hero and discoverer but rather a colonizer and oppressor.

Columbus Day wasn’t renamed officially, but those who oppose it celebrate Indigenous People’s Day on the second Monday of October as an alternative.

Which states do not recognize Columbus Day?

How did Columbus impact the world?

Columbus impacted the world through his voyages which empowered European countries to exploit and colonize other nations.

What did Christopher Columbus do?

Christopher Columbus is a known explorer and navigator and is considered by some people as the discoverer of the Americas.

Who started Columbus Day and why?

Columbus Day was proclaimed a holiday by Republican President Benjamin Harrison in 1892 to celebrate Christopher Columbus’s 400th anniversary of his arrival in the Americas.

What are three facts about Columbus Day?

Here are three facts about Columbus Day: it was first recognized by Colorado in 1906, it’s the least celebrated US federal holiday, and it’s also a celebration of Italian-American heritage.

What good things did Columbus do?

Some of the great things Columbus did are following his discovery of safe sea travel routes leading to the Americas and his arrival in the Americas led to some economic progression.

What did Columbus bring to America?