Comic-Con is among the largest events in comic book culture. Fans of the sci-fi, superhero, and fantasy genre await this grand gathering every year. The Comic-Con hype train is upon us again, so let’s learn facts about it today. 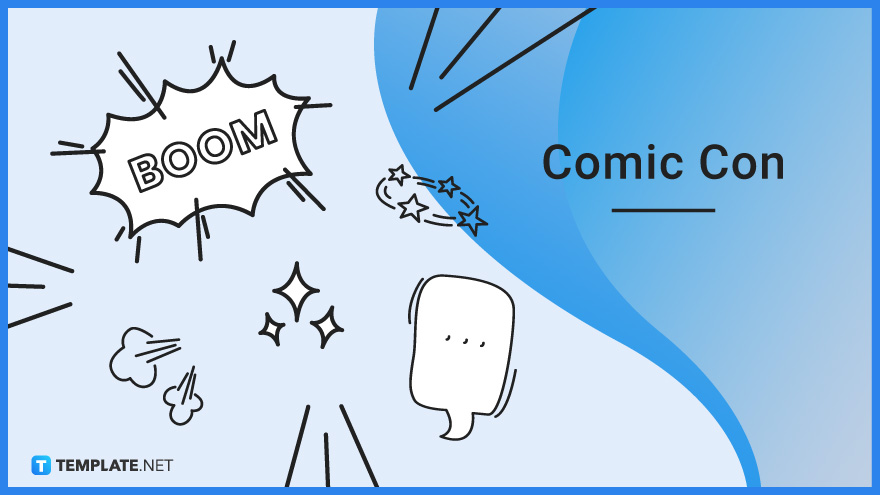 Comic-Con is a yearly event celebrating comic book culture and is participated by comic book fans, artists, writers, directors, and casts of actors.

Comic-Con, short for comic convention, is a four-day event held in San Diego, California that showcases the latest in the comic book industry and geek culture in general.

Since 2003, Comic-Con is held every summer in July in San Diego, California. It usually takes place in mid-July or late July. For 2022, Comic-Con will start on July 21 (Thursday) and ends on July 24 (Sunday). Comic-Con 2022 is expected to attract a large crowd because Comic-Con 2020 and 2021 were canceled due to COVID-19 restrictions.

Comic-Con is like Christmas Day for individuals who love comic books, fantasy stories, video games, sci-fi TV shows, and superhero movies. It’s an event that they have marked on their calendars. Comic-Con is indeed a big deal and let’s discuss the reasons why.

Glimpse Into the Future

Comic-Con showcases a lot of things regarding the future of certain comic book stories and movie franchises. Trailers of upcoming shows, films, and video games will be released during the event. This gives fans something to be excited about. Plus, directors, actors, and guest artists will be in attendance for panel interviews about their future projects.

As mentioned, artists and actors will be in attendance at Comic-Con. For fans attending, this is their chance to see their idols in person. And if they’re lucky, they can meet them up close, take pictures with them, and get them to sign autographs on their memorabilia. It’s special because meeting such celebrities is a once-in-a-lifetime experience that not every fan gets.

Comic-Con is a gathering of geeks—people who love comic books, fantasy, superheroes, and science-fiction. That said, it’s an event celebrating geek culture. Comic-Con is a beacon of what makes those genres special and their positive impact. Everyone is welcome at Comic-Con, whether you’re into Marvel, DC, Star Wars, Star Trek, Game of Thrones, Lord of the Rings, Dungeons & Dragons, Rick & Morty, and more.

A lot of things happen at Comic-Con. There are photo booths, people wearing costumes of their favorite characters, releasing of fresh trailers, artists announcing upcoming projects, and meetings and greetings with fans. The event will also be active online through live streams of panel interviews and other major updates.

Social media is a great platform to share your love of Comic-Con and express your Comic-Con spirit. So take a look at our guides to create a decent Comic-Con social media post below.

Select any of our Comic-Con templates for Facebook. Click the template of your preference and proceed to open it in our Editor tool.

You can start by changing the background color. Head to the Background settings and select the Colors section. From there, you can choose any color you want, be it pink, yellow, green, orange, etc.

If you want to attach images of superheroes or any fictional character, you can upload them. Head to the Uploads panel and select Photo. Upload an image file and then simply click and drag it to the post template.

Last but not the least, make sure to save your Comic-Con Facebook post. For now, keep it. Post it once Comic-Con is only a few days away.

2. Type in your Comic-Con party slogan.

If your post serves as an invitation to your Comic-Con party, you should include your slogan. It would help entice people to attend your party like a physical mail invitation. To do this, just change the default content in the Fill Text boxes under Fill settings.

Feel free to attach images of comics and novels to the post. You can find such images by going to Unsplash under the Graphics panel. You can type “comics” in the search bar to find the best results.

Change the background of the post if you feel like doing so. You can browse through various colors in the Colors sections under the Background panel. Simply click the color of your choice and it’ll automatically apply to the template.

Select any Comic-Con Whatsapp post template that speaks to you. Click it and go ahead opening it in our Editor tool to start the customization process.

2. Write your Comic-Con message or greeting.

Your Comic-Con message or greeting is the main attraction of the post. Encode it inside the Fill Text boxes in the Fill settings. Make it short and simple so that it’s easy to read.

A background image would brighten up the aesthetic of your post, so consider applying one. Go to the Background settings, select Photo, and search for Comic-Con-related images under Unsplash. Click the image you want and it’ll automatically apply as a background to your post.

If you have a personal logo or organizational logo of sorts, you can add it to the post as a way of branding. Simply upload an image file of your logo via the Logo panel in the Editor tool.

After inserting and editing things, save your Comic-Con Whatsapp post. Click the button with a three-dotted symbol in the upper right corner then select Save. When Comic-Con is only days away from commencing, you can upload it to Whatsapp.

Comic-Con is a four-day comic book convention held in San Diego, California every year during the summer.

Wondercon is also a yearly comic book convention event that lasts three days and is exclusively held in the Anaheim Convention Center in Anaheim, California.

If you love fantasy, comics, and science-fiction, Comic-Con should be marked on your calendar. Plan and prepare your Comic-Con celebration now by checking out our Comic-Con ideas and examples.

You can do these activities to celebrate this year’s Comic-Con:

We’ve gathered some of our best Comic-Con examples to help you design your own Comic-Con flyers and social media posts. Check them out below. 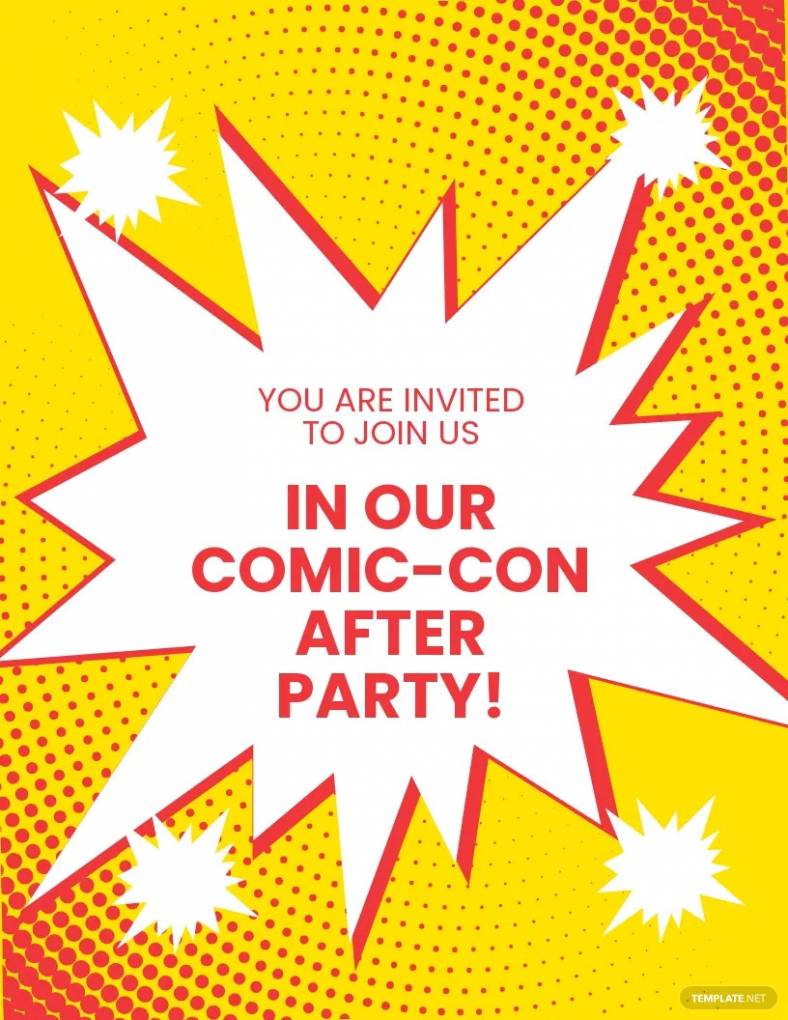 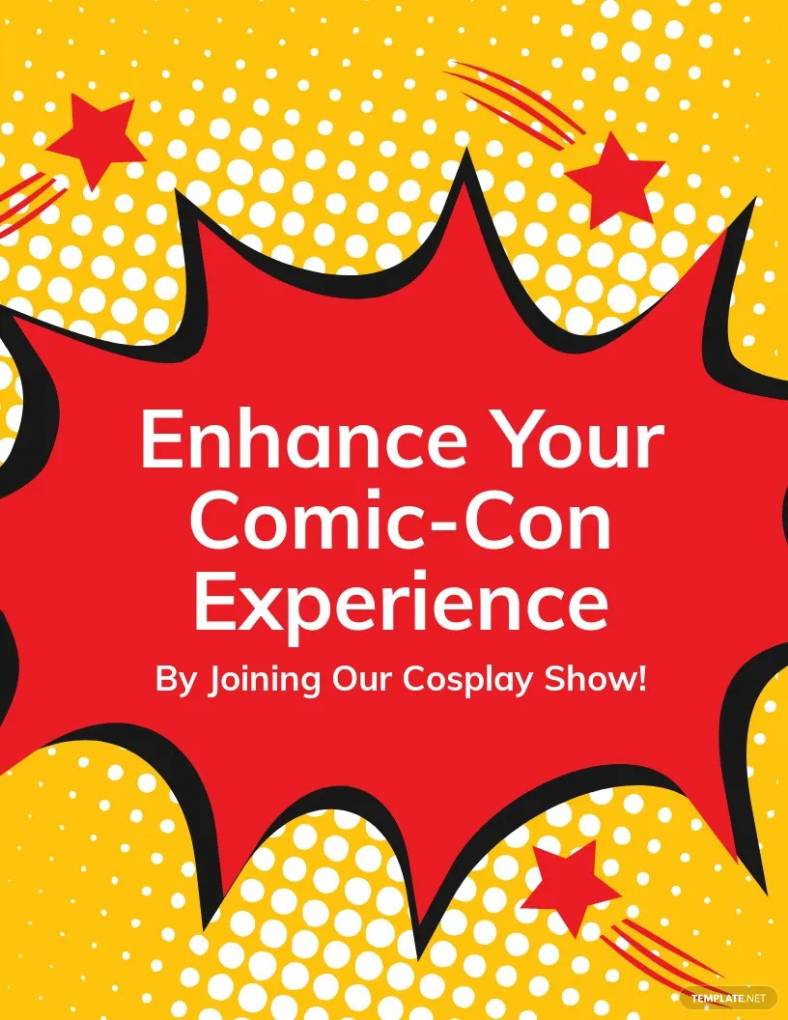 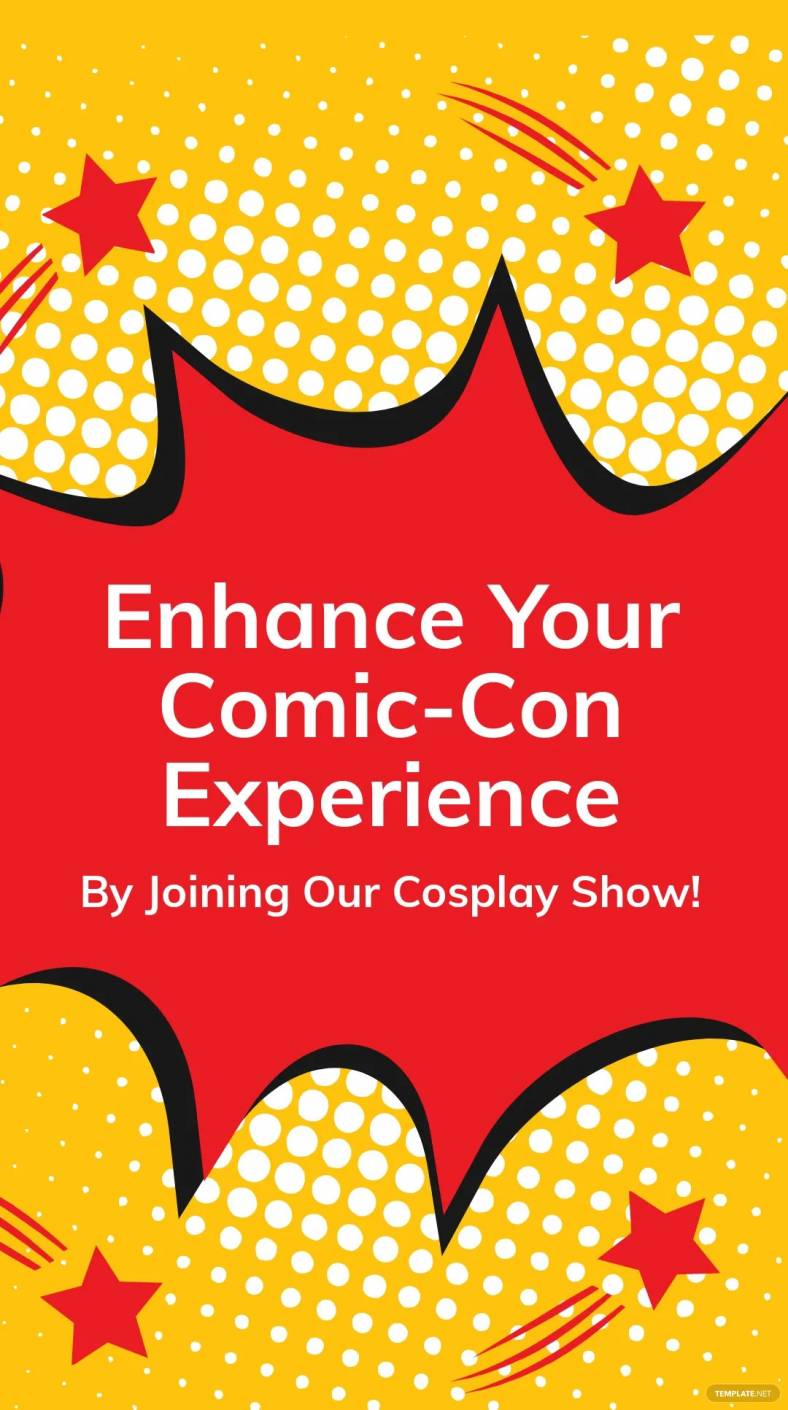 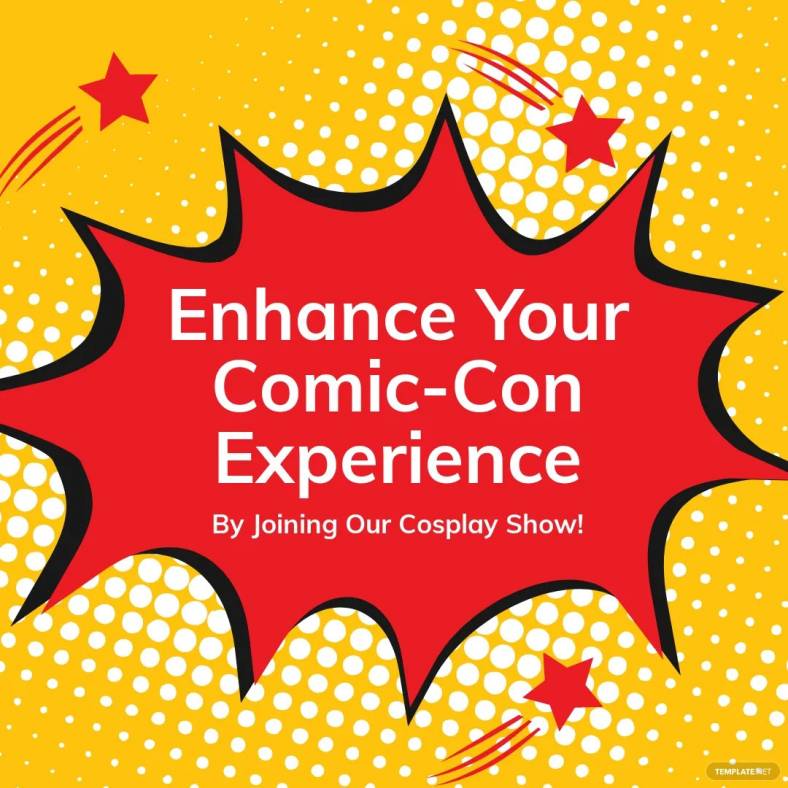 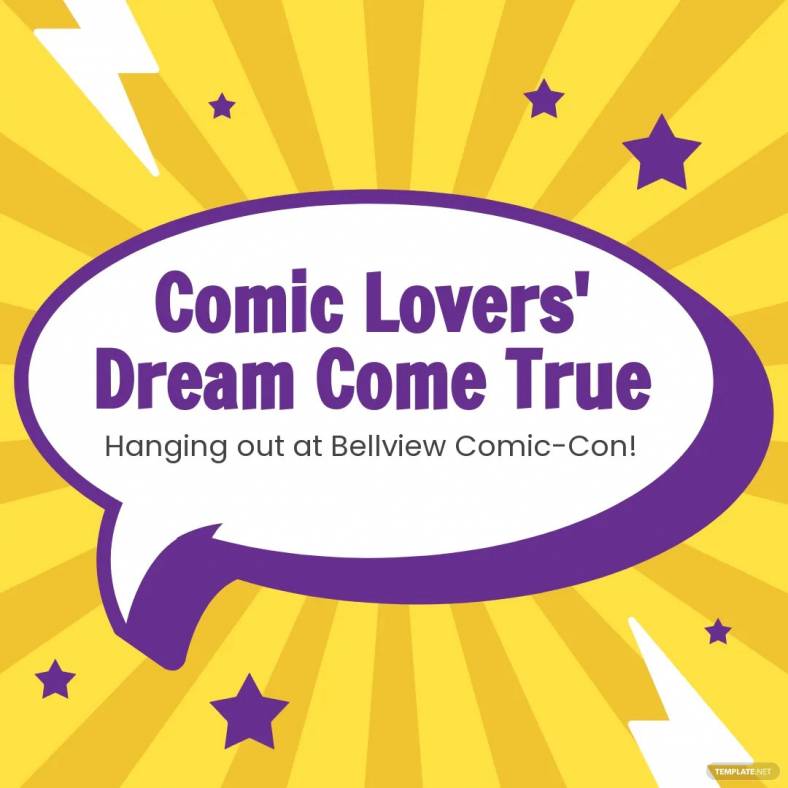 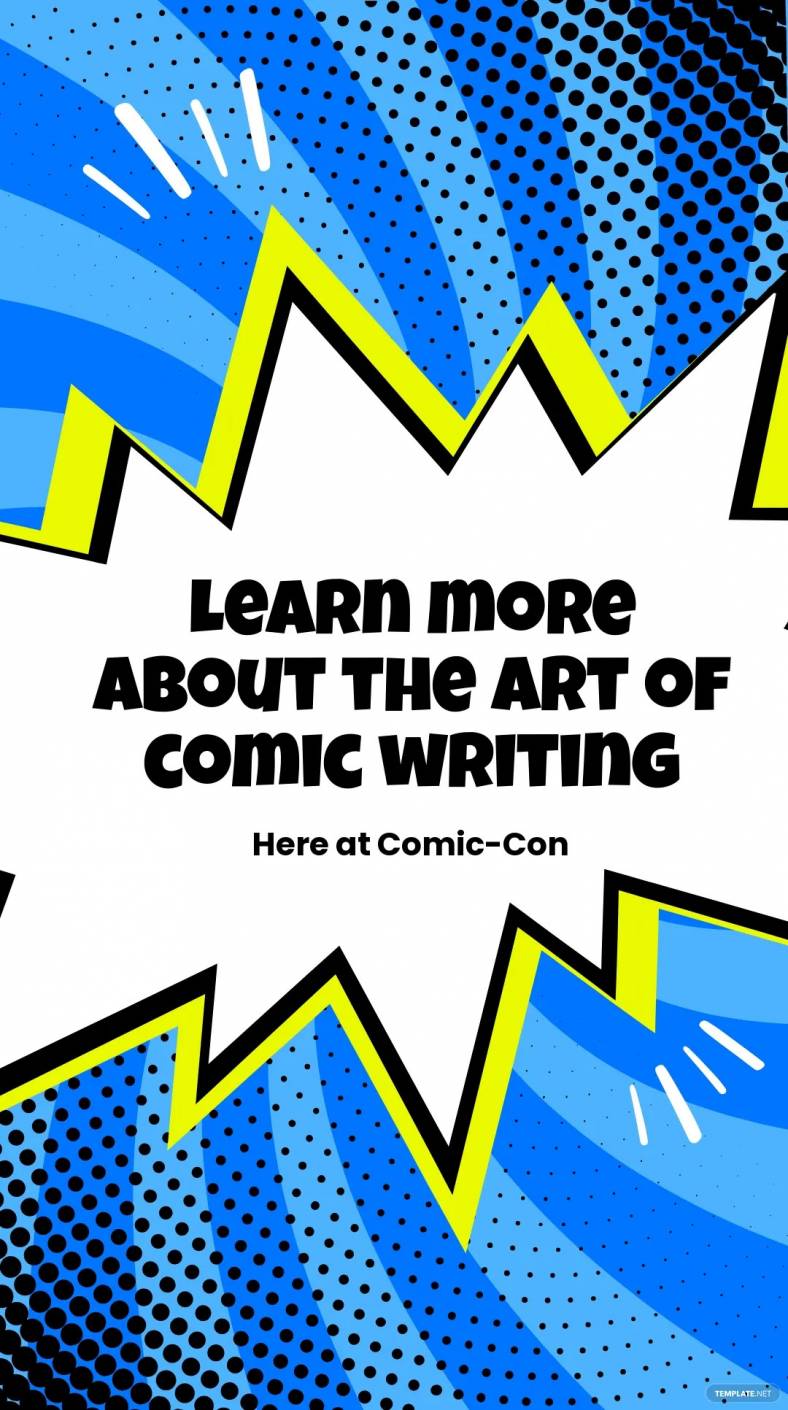 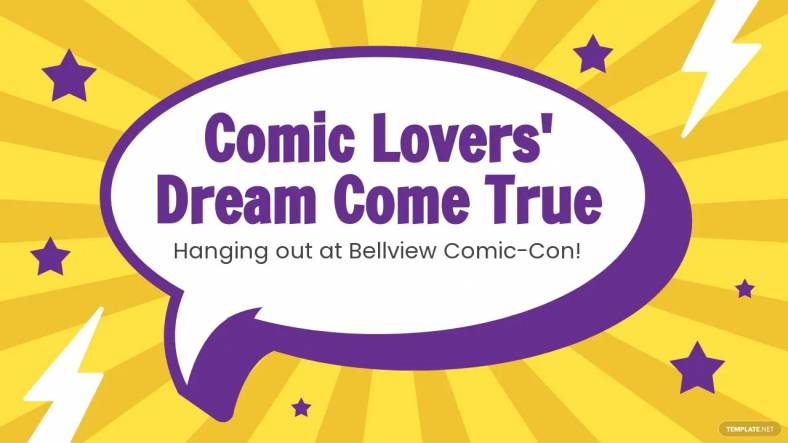 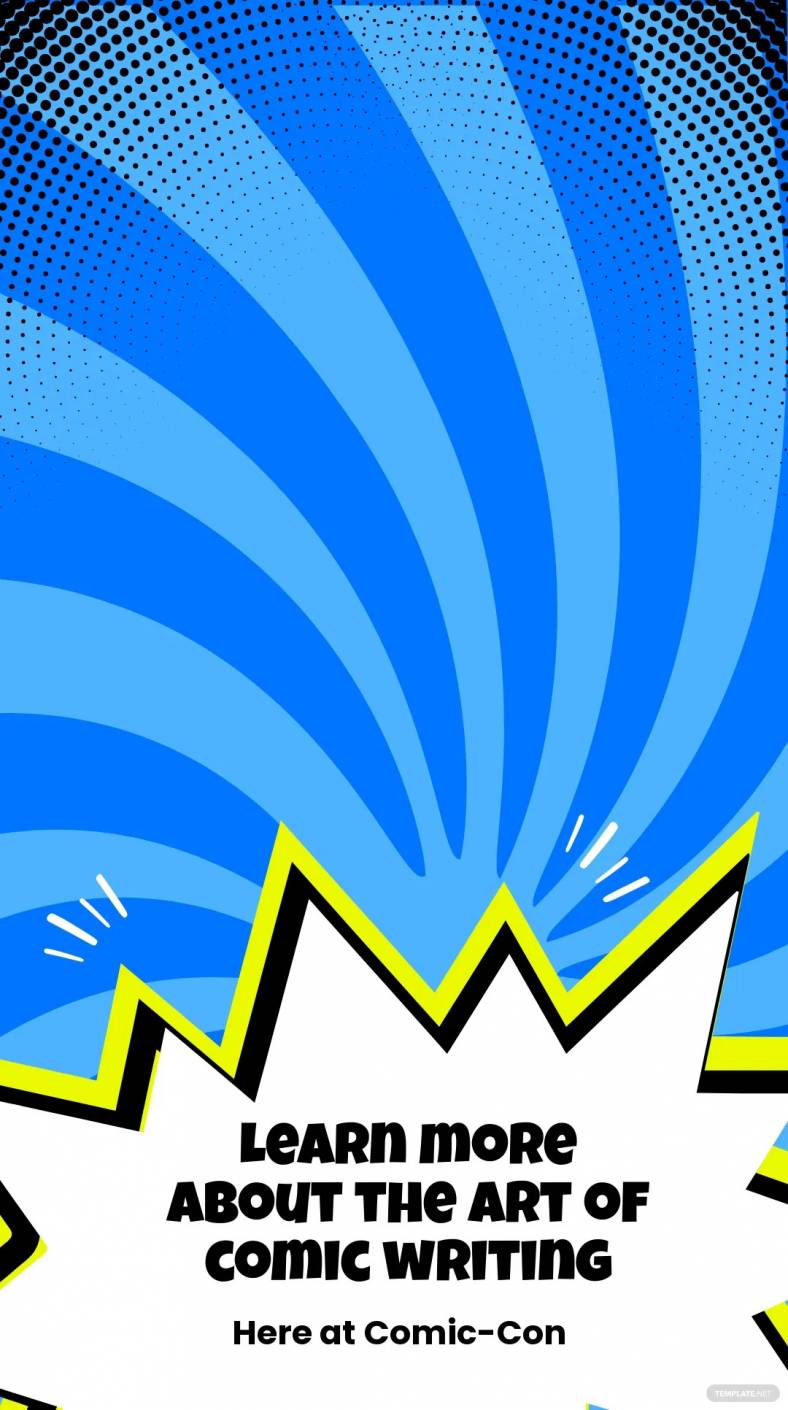 What does Comic-Con include?

Comic-Con primarily includes the showcasing of comic books and other forms of storytelling related to comics such as movies, video games, TV shows, and novels.

What happens at Comic-Con?

Which Comic-Con is the most famous?

There are actually multiple Comic-Cons but the most famous is the San Diego Comic-Con which is also referred to as Comic-Con International or simply Comic-Con.

What is the history of Comic-Con?

Comic-Con started in 1970 and was first organized by a group of sci-fi, movie, and comic book fans in San Diego, California.

What does Comic-Con stand for?

When did comic conventions become popular?

Comic book conventions started becoming popular in 1976 as 20 conventions took place that year across the US.

When was the first Comic-Con?

Why did they change the name of Comic-Con?

They change the name of Comic-Con so it won’t be confused with other comic convention events with similar names.

What is the original Comic-Con?

The original Comic-Con took place in San Diego California in 1970 and was attended by only 300 people.

What are facts about Comic-Con?

Two brilliant facts about Comic-Con are that it’s San Diego’s most profitable event and attracts hundreds of thousands of attendees.

What you should know about Comic-Con?

The one thing you should know about Comic-Con is that new movie trailers are likely to release and announcements of new projects will be made by artists, movie producers, and directors.

Why was Comic-Con created?

Comic-Con was created because its original organizers simply wanted to meet other comic book fans.

What do you see at Comic-Con?

The first things you’ll see at Comic-Con are the people cosplaying their favorite characters and lots of comic book artwork such as posters.

What is not allowed in Comic-Con?

Among the things not allowed at Comic-Con are fireworks, rolling luggage, drones, pets (only service animals are allowed), and helium-filled products.