Flag Day marks one of the most important days in United States history. This holiday is wholeheartedly celebrated by Americans for good reasons. So let’s talk about Flag Day. 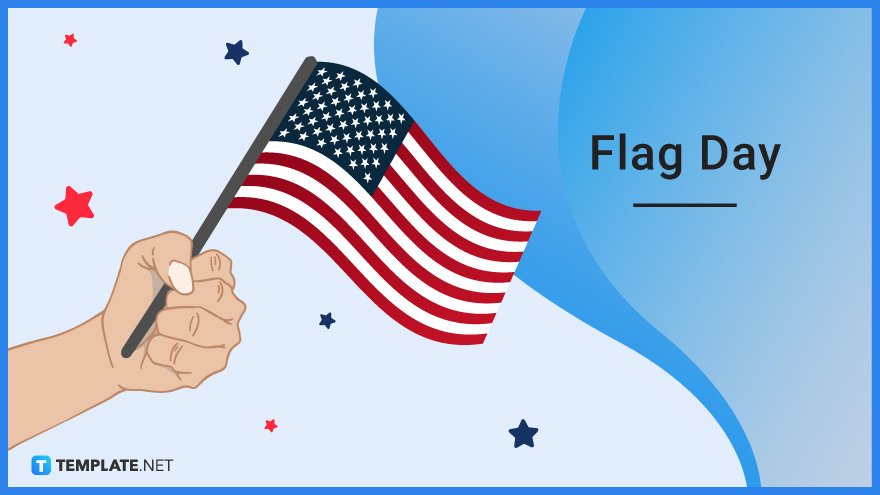 Flag Day, known also as National Flag Day, is a significant US holiday that honors the date that the American flag was adopted.

Flag Day is an American holiday that commemorates the birth and adoption of the star-spangled US flag.

When Is Flag Day?

Flag Day happens on the same date every year which is June 14. This year’s Flag Day falls on a Tuesday, June 14, 2022. The reason why Flag Day is observed on the same date yearly is that it was on June 14, 1777 that the US flag was adopted. The adoption happened under the Flag Act which was approved by the Continental Congress.

Each country has its own flag and each flag is an icon that represents a nation’s culture and identity. So like many other national flags, the US flag holds deep importance to the Americans. That said, let’s discuss why Flag Day is such an important US holiday.

Commemorate the Birth of the US Flag

The main reason Flag Day is celebrated is to commemorate its birth and adoption on June 14, 1777. It’s a special day because, before that time, the US didn’t have an official flag after being declared as an independent country on July 4, 1776. One could even say that Flag Day is the birthday of the American flag.

The US flag doesn’t only represent the country’s foundation. It’s also a symbol of unity. The 50 stars of the flag represent the 50 US states and they’re put together side by side. It’s an indication that every American town, city, and state are united with the country. So every year on Flag Day, Americans celebrate their unity as one nation.

The adoption of the US flag is a historic day and one that must be preserved. That’s why Flag Day is a significant holiday to keep the memory of that day alive and pass it on to younger generations. And also, the celebration of Flag Day is a staple American tradition. So, it must be observed and respected every June 14.

Honor the Brave Men and Women

The United States has Memorial Day and Veterans Day to honor the brave men and women who served the military. However, Flag Day is also a good opportunity to honor them. US military personnel served and fought for the country’s freedom which is one of the things the flag represents. Their valiant efforts are honored on that day through a special tribute ceremony.

Flag Day is a grand American celebration that happens yearly in the month of June. On that day, plenty of social gatherings happen across the country. There are parades, concerts, kids wearing star-spangled outfits, US flag tribute ceremonies, patriotic house party gatherings, and more events.

The story behind Flag Day’s establishment is worth telling. Along the way, you’ll learn important facts about the holiday and the American flag itself. So right now, let’s talk about the significant events that shaped the history of Flag Day.

Creation of the First Flag

The first American flag was designed and sewn by Betsy Ross in 1776. The initial design of the flag had 13 six-pointed stars and 13 red and white stripes. According to some accounts, Betsy was asked by George Washington himself to create the official American flag. She honorably agreed. Later on, she suggested changing the stars from having six points to five points.

Payment from the Pennsylvania State Navy Board

Betsy Ross earned quite a lot of money for her labor and delivery of the flag’s design. She was paid by the Pennsylvania State Navy Board on May 29, 1777 for her efforts in designing and sewing flags. It is, however, unclear how much money she earned.

Adoption of the US Flag

The US flag was adopted on June 14, 1777. The adoption was made possible thanks to the establishment of the Flag Act of 1777 which was passed by the Second Continental Congress. The current version of the flag at that time had 13 alternate stripes of red and white.

Fast forward to June 14 of 1885, Bernard Cigrand, a school teacher in Wisconsin, coined the idea of having an official National Flag Day. He proposed that it should be an annual observance in honor of the day the flag was adopted. Bernard proposed the idea every year in an attempt to make Flag Day a legal holiday.

President Woodrow Wilson declared Flag Day as a celebration to be observed every June 14. He declared it in 1916, over three decades after Bernard Cigrand proposed the idea. Two decades later, the State of Pennsylvania became the first state to observe Flag Day as a legal holiday.

On August 3, 1949, Congress declared June 14 as National Flag Day. It coincides with the birth date of the US army which is June 14, 1775. Since then, June 14 has been a double celebration for the US.

Flag Day is an American holiday honoring the US national flag and its adoption on June 14, 1777.

Independence Day, more popularly known as 4th of July, is a US federal holiday celebrating the anniversary of the Declaration of Independence which was established on July 4, 1776.

As an American citizen, you should proudly fly and celebrate your national flag. Flag Day only comes once a year, so make the most out of it. Here are some Flag Day ideas and examples to help plan your celebration.

Here are some fun, engaging activities you can do to celebrate Flag Day:

Check out these amazing Flag Day examples we’ve combined below. Use them as inspirations to make your own Flag Day clipart, quotes, flyers, posters, and memes. 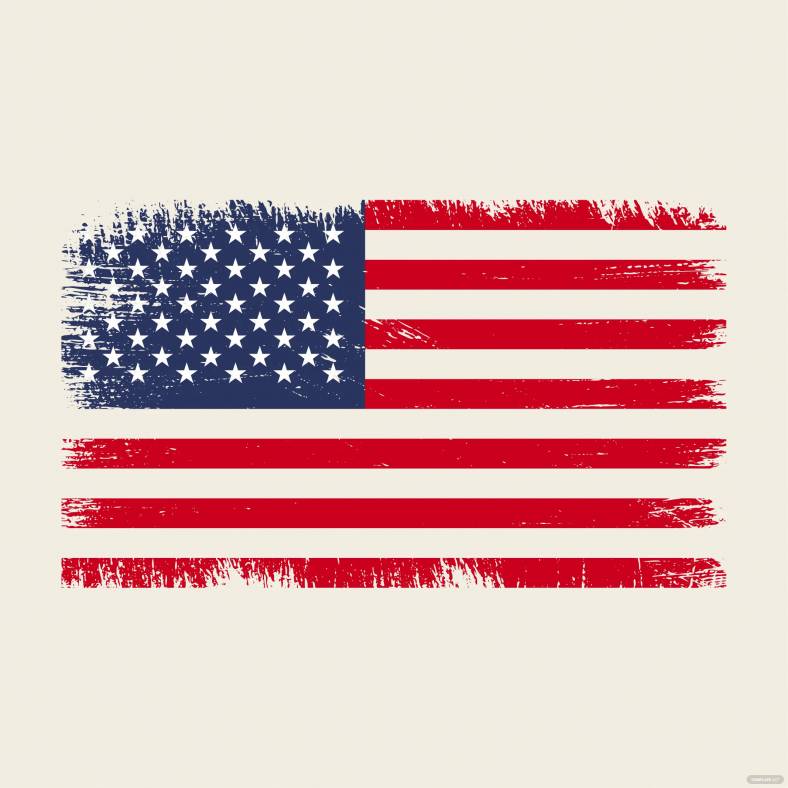 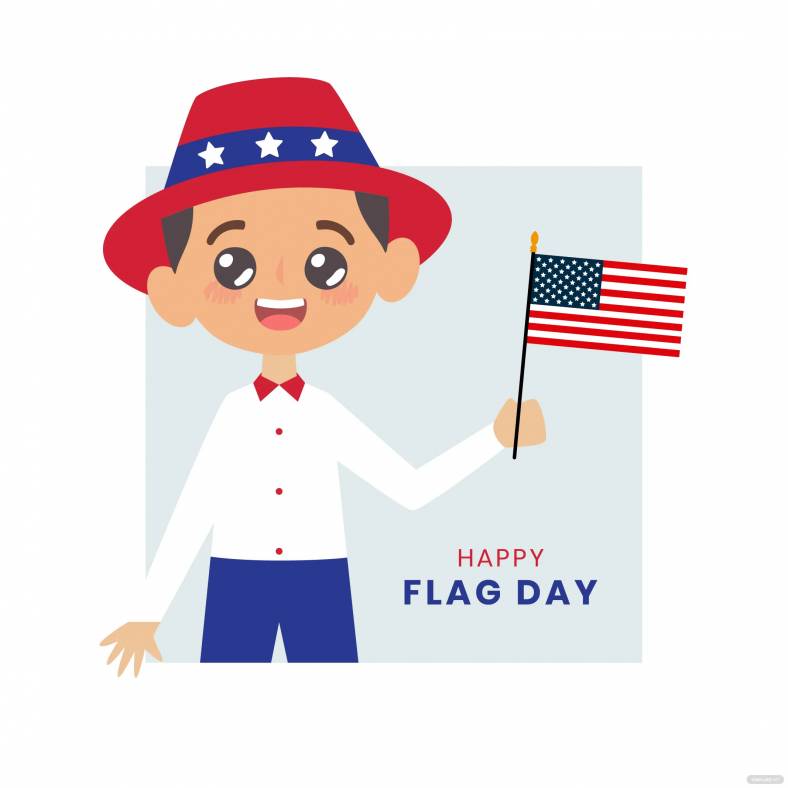 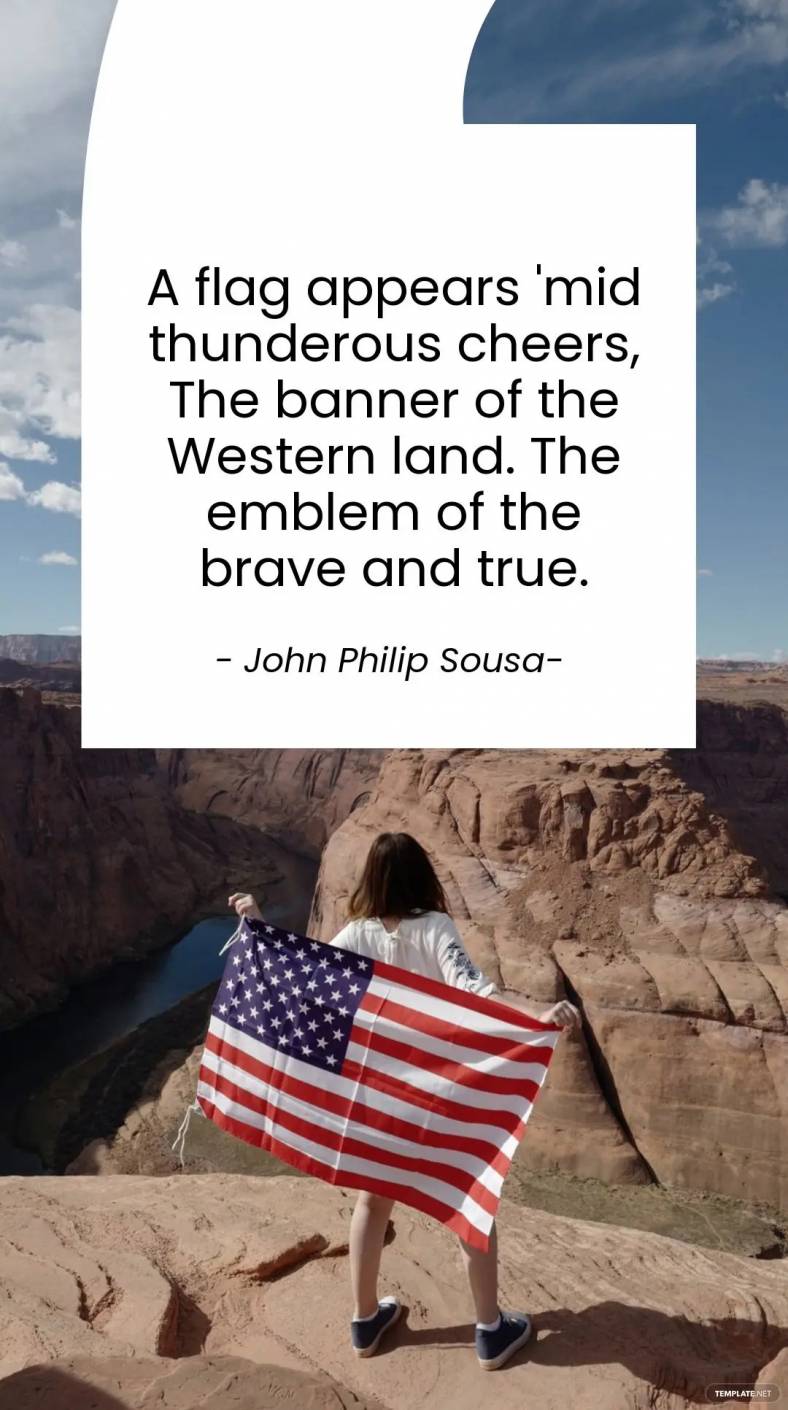 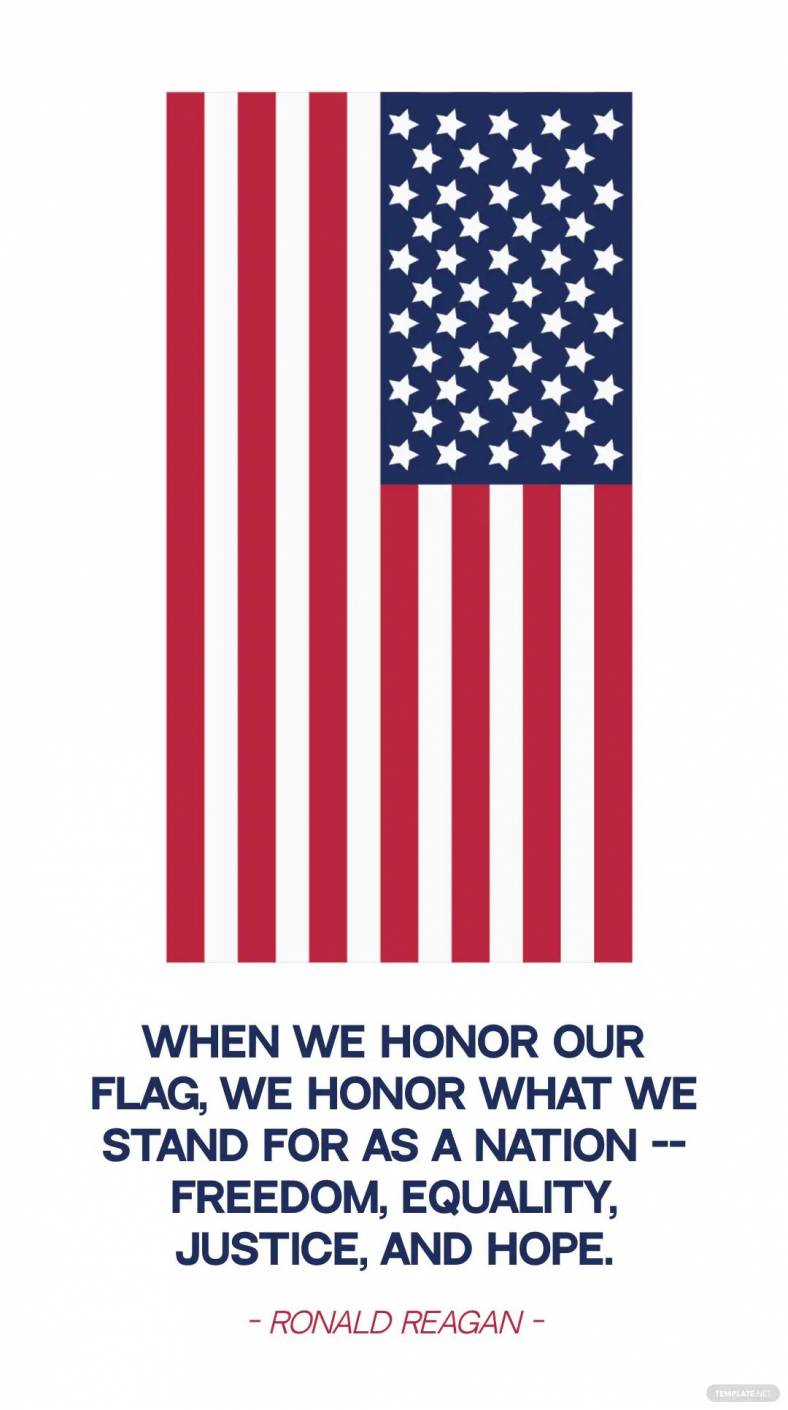 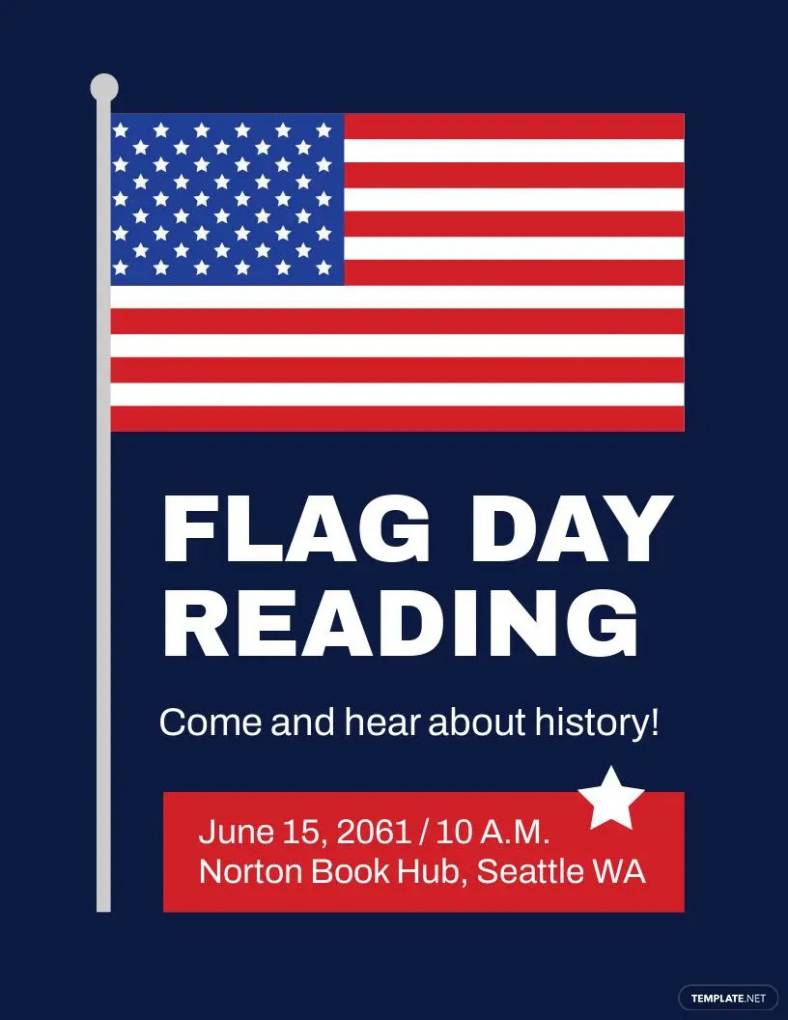 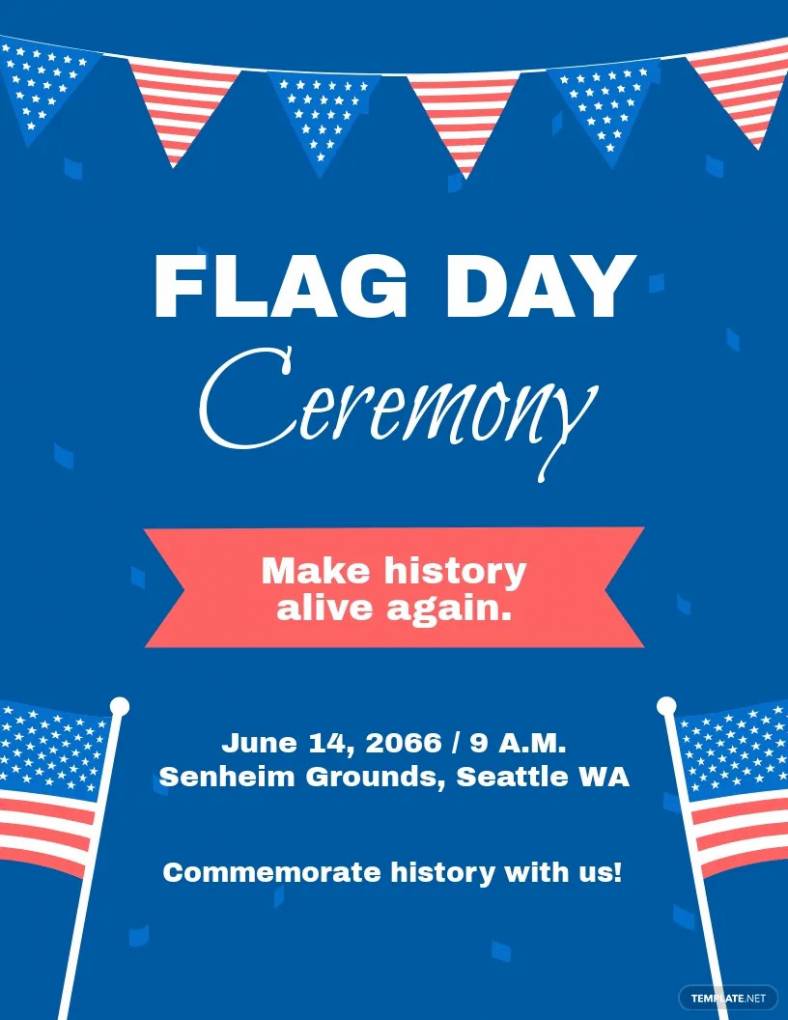 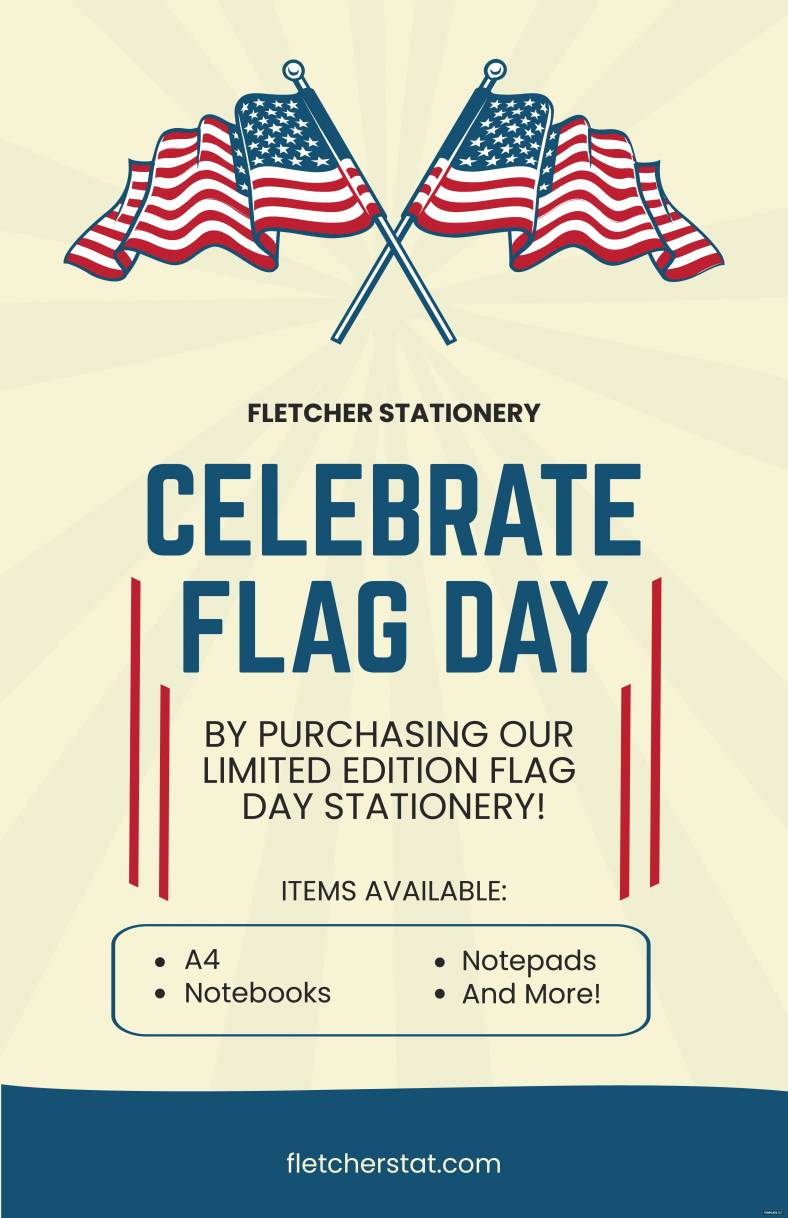 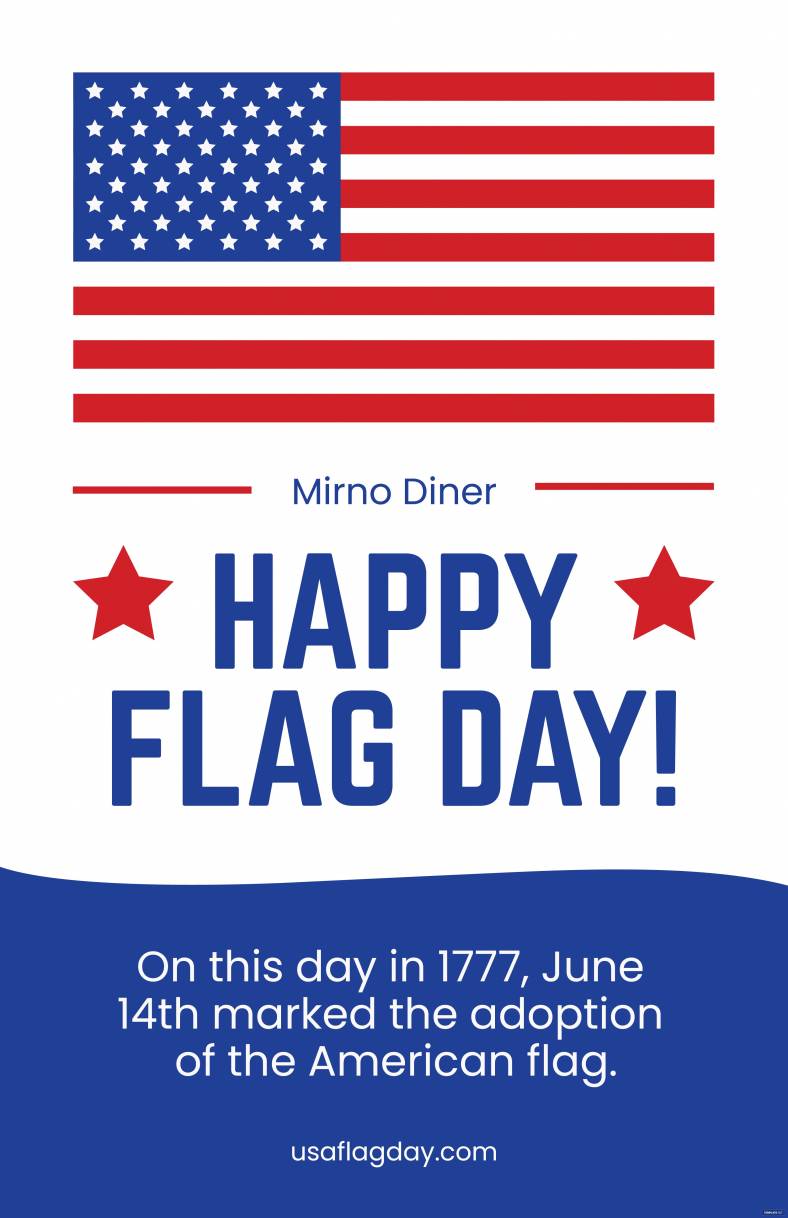 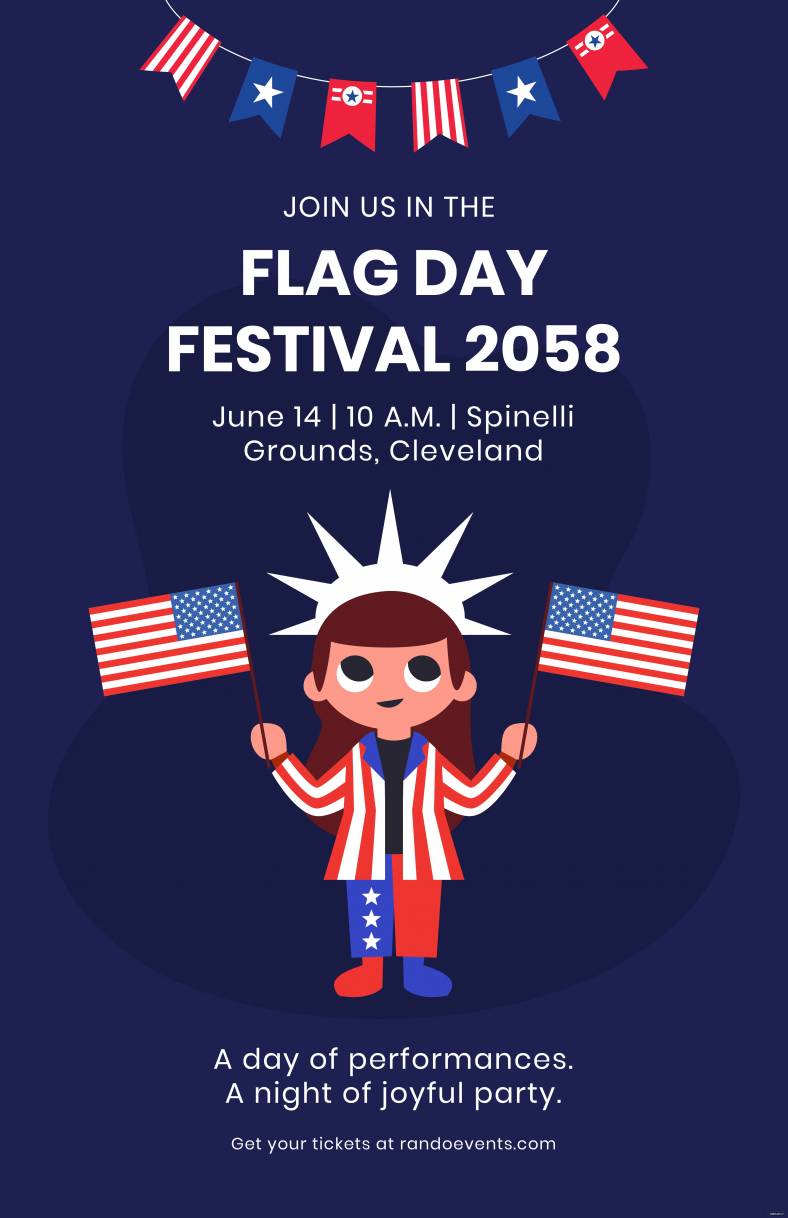 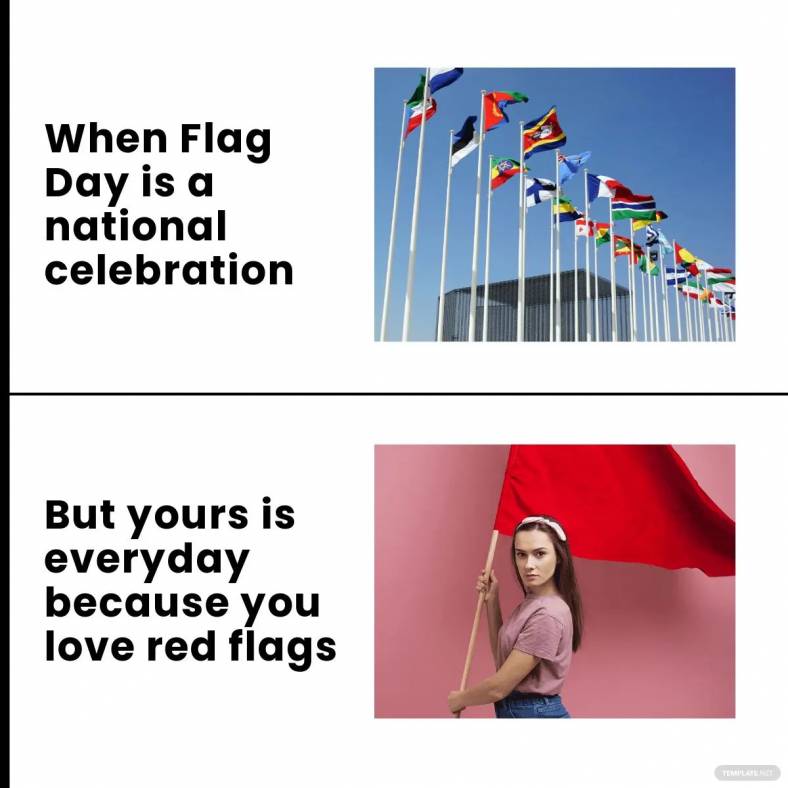 What happens on Flag Day?

On Flag Day, many people will wear red, white, and blue in commemoration of the adoption of the US flag in 1777.

Why do we celebrate Flag Day?

We celebrate Flag Day because it marks the day the US flag was adopted which is a significant event in American history.

Who came up with the idea of Flag Day?

Bernard Cigrand, a Wisconsin school teacher, came up with the idea of Flag Day.

Where is the birthplace of Flag Day?

The small town of Wisconsin is considered the birthplace of Flag Day.

What is the tradition of Flag Day?

Flag Day’s main tradition is to simply commemorate and honor the US national flag with pride and patriotism.

What is the significance of Flag Day?

Flag Day is a significant holiday because it’s the anniversary of the Flag Act of 1777 which approved the adoption of the US flag.

What is the origin of Flag Day?

National Flag Day originated as an idea and was proposed by Bernard Cigrand in 1885, but it was officially declared decades later by President Woodrow Wilson in 1916.

What do you say on Flag Day?

You can greet people on Flag Day by simply saying “Happy Flag Day!”

What is the official Flag Day?

Flag Day is also called National Flag Day and is celebrated every June 14 to commemorate the adoption of the flag.

What does the flag honor?

The US flag symbolizes and honors perseverance, hope, freedom, and individualism.

Why is Military Flag Day celebrated?

Military Flag Day is celebrated to honor the US soldiers who served the military and fought for what the US flag represents.

What does Flag Day symbolize?

Flag Day symbolizes the freedom and independence the Americans achieved through acts of bravery and patriotism.

Is Flag Day the same date every year?

Yes, Flag Day is celebrated on the same date every year on June 14.

What does Flag Day stand for?

Flag Day stands for the celebration of the US flag and what it means to American history.

Flag Day isn’t a national holiday because it wasn’t included in the Uniform Holiday Act of 1968.

What does Flag Day represent?

Flag Day represents the significance of the US flag and the rich history behind its creation.