Hanukkah is a festival observed by the Jewish community. It is one of the holidays that is observed during the winter season. Since winter is coming, let’s learn about this holiday.

Hanukkah is a Jewish festival that celebrates the recovery of Jerusalem and the rededication of the Second Temple during the start of the Maccabean revolt in 2 BCE.

Hanukkah, also known as the Festival of Lights, is celebrated during the winter season and is often celebrated around the same time as the Christmas season.

Hanukkah generally takes place during the winter season or late fall depending on the alignment with the Hebrew calendar. According to the calendar, Hanukkah begins at the start of the 25 Kislev and ends on the 2nd or 3rd Tevet, which means this holiday is celebrated by the Jewish community for around 8 days.

The origins of Hanukkah are an interesting story and one that is definitely worth learning. This all took place during what was known as the Second Temple period in the 2nd century BCE. Here are some of the key details regarding the background of Hanukkah and why it is celebrated differently in modern times.

When the reign of Antiochus IV started in 167 BC, he outlawed Judaism and forced the Jews to worship Greek gods instead. Jerusalem was invaded by Antiochus IV’s army and the Jewish Temple was desecrated.

An uprising occurred against King Antiochus IV led by Jewish Priest Matthias and his five sons. They were known as the Maccabees (Hebrew for ‘hammer’). Antiochus IV lost a series of battles, losing control over Jerusalem, and allowing the Jews to regain the Temple.

They repaired the temple and performed a rededication ceremony, where the first menorah was lit. Despite the lack of oil, it burned for eight nights which they all believed was a miracle. The origins of Hanukkah. Eventually, in 142 BC, Antiochus IV was succeeded by Demetrius who granted the Jews their independence.

A Jewish historian, Flavius Josephus writes down the origins sometime in 86 AD. He called this event the Festival of Lights.

The oral laws of Judaism were put into writing and that’s where the Festival of Lights was called Hanukkah which means ‘dedication’.

Around the 1920s, Hanukkah became an important holiday for the Jewish community in North America. They observed the Festival of Lights by lighting the menorah, serving traditional foods, and playing games. It is now a festival used to remember history, celebrate family, and a way for the Jewish community to maintain their distinction among others.

A lot of members of the Jewish community observe and celebrate Hanukkah as it is a Jewish holiday where everyone else outside the faith is welcome to join and celebrate.

For a lot of members of the Jewish community, their religion is a big part of their identity. Celebrating Hanukkah allows practicing Jews to reaffirm their connection with this culture.

Jewish culture places a lot of emphasis on familial love. Hanukkah is a festival that gives Jewish families a reason to celebrate and bond together by making happy memories.

With the animated history of Hanukkah’s origins that colors the fate of Jewish society, it is important for them to remember and observe its events so that no one may ever forget the time when their ancestors faced a huge challenge to their way of life.

The story of how Hanukkah began, shows how standing up to challenges and having hope will always be rewarded with happiness. That is why the Jewish community observes this festival, as a way to celebrate hope.

What’s in a Hanukkah?

On Hanukkah, the Jewish community celebrates by lighting the menorah, playing the game of dreidel, and eating special holiday foods. There are usually social gatherings organized during this holiday as well. In spite of its serious origins, modern-day Hanukkah is a happy occasion and is widely celebrated by most of the Jewish community.

As Hanukkah is a festival in which everyone is welcome to celebrate, promoting the Festival of Lights is a fun thing to do on Social Media. You can also use these posts to remind fellow Jews in observing this important event in your collective history. Get started by creating Hanukkah social media post draft with the help of these guides.

On the Editor page, head to the Fill option, and under Fill Text, you can add your custom Hanukkah greeting. Try to keep it short and simple.

Head to the Graphics panel to add more graphic designs to the template if you prefer. You can add clipart, shapes, and other graphics. Make sure that they match the post’s aesthetic.

Next, go to the Photos panel and search for Hanukkah-related photos under Unsplash or Pixabay. You can insert one by clicking on your chosen photo.

Pick a Hanukkah Template with designs that will compliment your Instagram feed.

On the right side of the Editor tool, you’ll find the Photos panel. Click it, and search for Hanukkah photos either on Unsplash or Pixabay. Browse the images shown and choose the one that fits your Hanukkah Instagram post.

While the template has a default greeting, you can change it by going to the Fill panel. On the boxes under Fill Text, you can change the text to your own Hanukkah greeting.

If you want to add graphic designs then go to the Graphics panel. Browse for clipart or visuals that relate to Hanukkah.

Once you’re finished click the three-dotted icon in the upper right corner and select the Save button. You can now go and upload your template to Instagram.

Here are some facts you should remember about Hanukkah.

Hanukah is an 8-day festival celebrated by the Jewish community with the dates varying according to the Hebrew Calendar.

Christmas is a day that Christians celebrate for a day which is on the 25th of December when they commemorate the birth of Jesus, the central figure of their religion.

Hanukkah is a tradition where the Jewish community can get together and commemorate an important event in their history. There are a lot of activities one can do to observe the customs of this festival. Here are some examples of what you can do during the Festival of Light:

Here are some activities you can do to observe Hanukkah:

Check the visually beautiful Hanukkah examples we’ve presented below for inspiration for your own Hanukkah greetings, messages, flyers, posters, and social media posts. 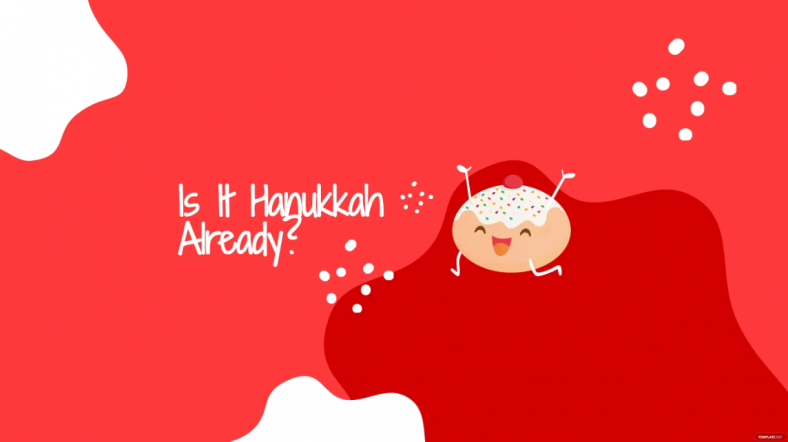 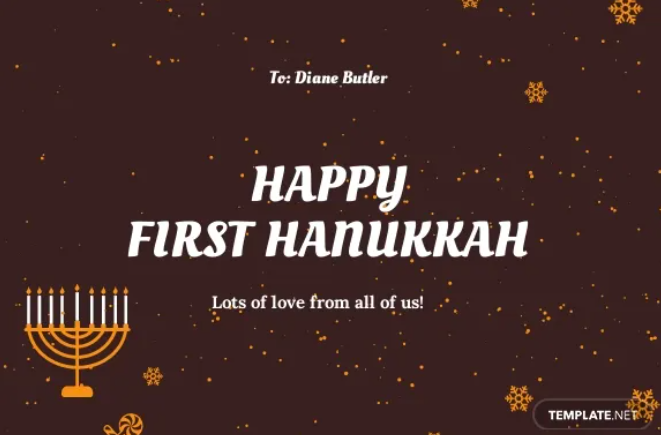 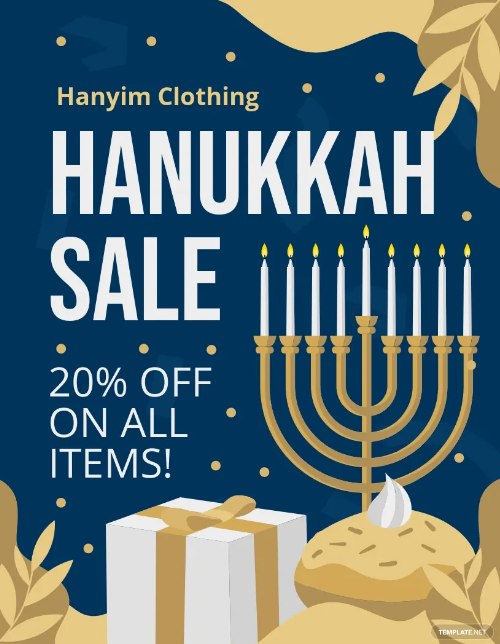 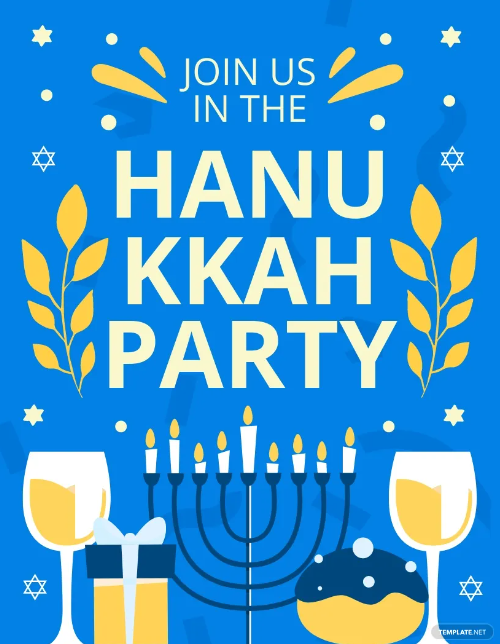 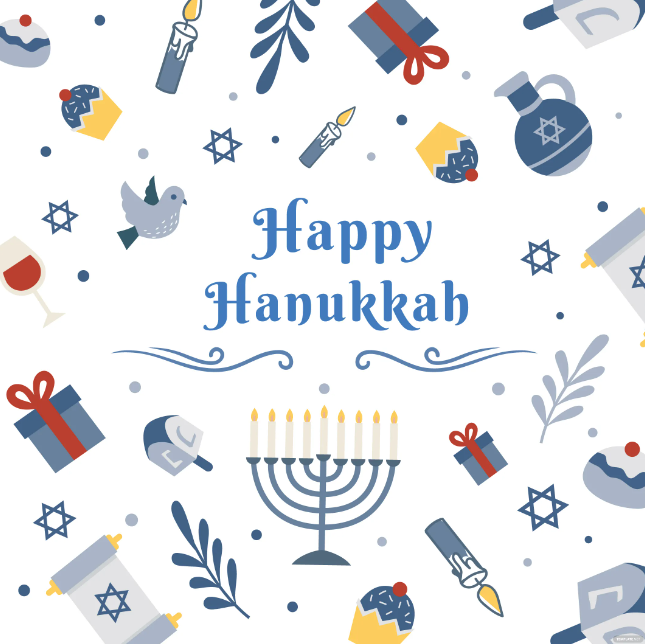 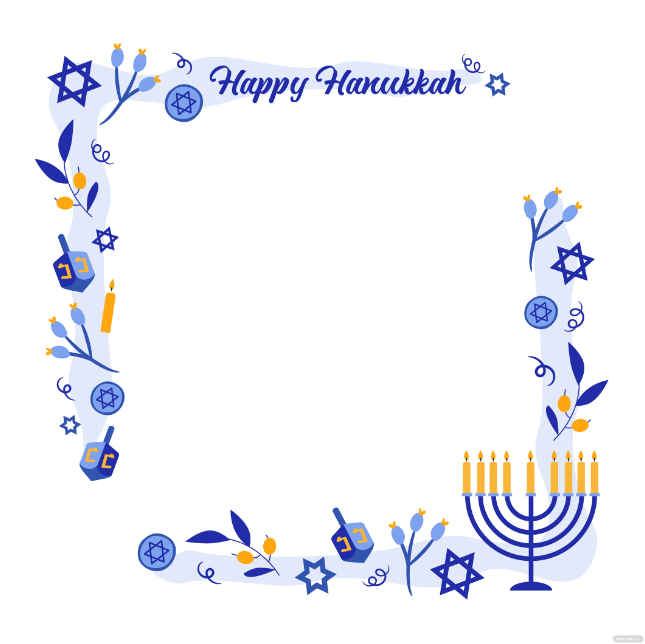 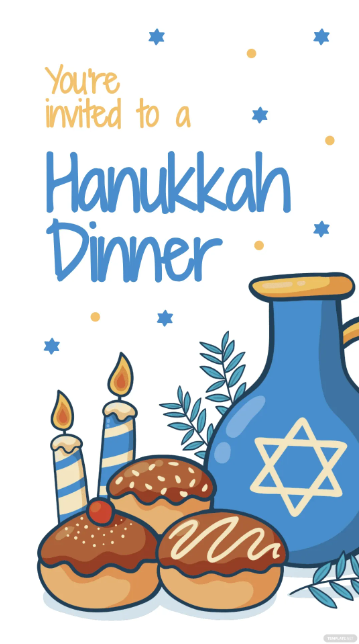 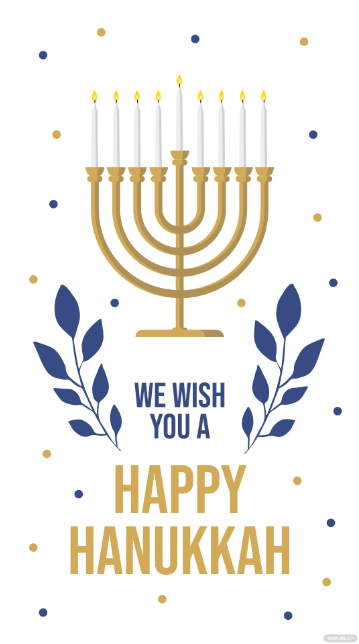 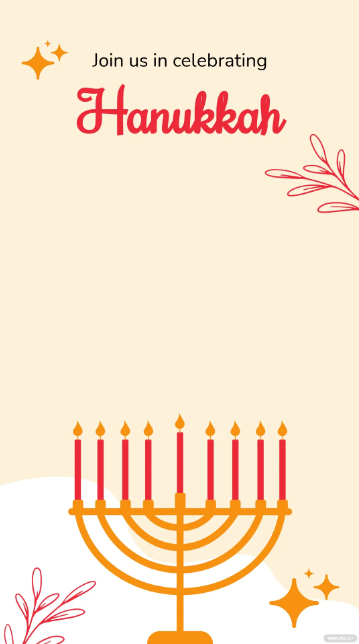 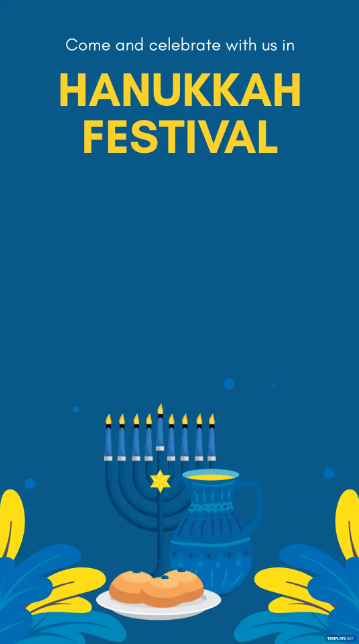 What is Hanukkah and why is it celebrated?

Hanukkah is a Jewish festival that lasts for 8 days and it is celebrated to commemorate the miracle of the menorah lighting for 8 days despite lacking enough oil to keep it burning in the Temple.

What plants are in Hanukkah?

The traditional Hanukkah flower is the lily flower and it is included in any Hanukkah bouquet, which you may also send to someone else for eight days.

Does Hanukkah have ornaments?

As most traditions involve decor and ornaments, so does Hanukkah with the notable one being the menorah, complete with nine candles.

What color are Hanukkah flowers?

When did the tradition of Hanukkah start?

The tradition of Hanukkah started around the second century BCE, specifically in 164 BCE.

While the origins of Hanukkah were 2 centuries before the common era, it was officially considered a festival by Jewish historian Titus Flavius Josephus when he recorded the events of the rededication of the Jewish Temple.

What is the story behind Hanukkah?

When the Jewish people led a revolt against King Antiochus IV for outlawing Judaism and invading Jerusalem, they were able to retake the city and cleanse the Temple.

How did Hanukkah get started?

Hanukkah was started when historian Titus Flavius Josephus coined the event of the Jews retaking their Temple as the Festival of Lights.

What does Hanukkah celebrate?

Hanukkah celebrates the Jewish people’s rededication of the Second Temple in Jerusalem after winning a series of battles against the monarchy of Antiochus IV.

Who destroyed the temple of Hanukkah?

The Second Temple was destroyed by King Antiochus IV when he invaded Jerusalem after outlawing Judaism during his reign, which led to the origins of Hanukkah.

Why is Hanukkah blue and white?

Blue and white are significant colors because it is said that God told the Jews to wear blue cords to the fringes or tzitzit, of their clothing which was made of white threads.

Where is Hanukkah originally from?

The festival of Hanukkah originated in Jerusalem, as it commemorates a historical event that took place there.

What are the Hanukkah candles?

The Hanukkah candles are known as the menorah, which has eight branches for eight other candles.

What is a symbol for Hanukkah?

The famous symbol of Hanukkah is the menorah, the eight branches candle whose name is the Hebrew word for lamp.