Rizal Day is observed on December 30 as a national holiday in the Philippines to honor Jose Rizal’s life and achievements as a national hero. The date, December 30, is the anniversary of Rizal’s execution in 1896 at Bagumbayan, in Manila. 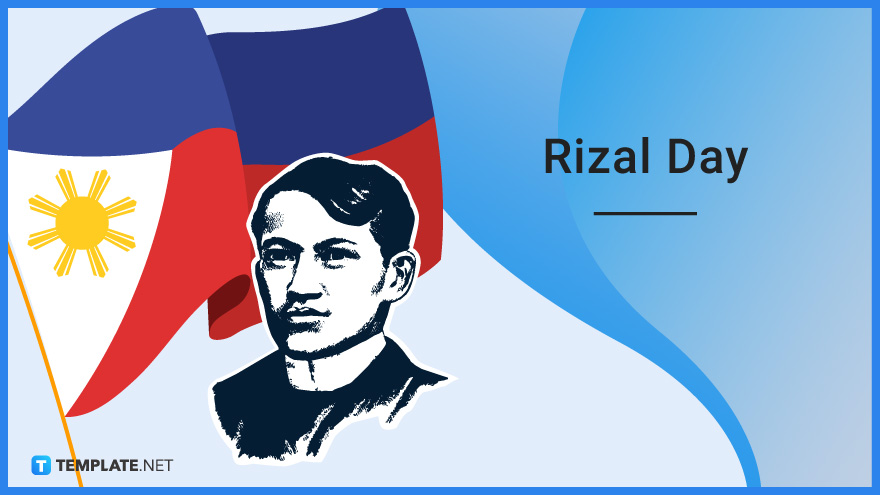 Rizal Day is celebrated as a legal holiday in the Philippines on December 30 in remembrance of Jose Rizal, a Filipino patriot who died in 1896.

Rizal Day is the day that the whole nation of the Philippines observes the death anniversary of their great national hero, Jose Rizal.

When Is Rizal Day?

Rizal Day is on December 30, an annual celebration in the Philippines. The fact that Filipinos commemorate Rizal Day on December 30 of every year is contentious since it marks his passing rather than his birthday, which falls on June 19, 1861.

Jose Rizal, or Jose Protasio Rizal Mercado y Alonso Realonda, was born on June 19th, 1861 and was a novelist, poet, and ophthalmologist, but is best known as a Filipino nationalist and revolutionary. He denounced the Spanish colonizers’ corrupt administration of the Philippines in his 1887 book “Noli me Tangere” and many historians concur that “El Filibusterismo (Reign of Greed)” and the ideals he presented in that book encouraged the revolution. Despite the fact that he had never engaged in combat, he was detained, put on trial for treason, and Rizal was shot to death by firing squad on December 30, 1896, at Bagumbayan Field. The inaugural Rizal Day was observed as a national day of mourning for Rizal and all the victims of Spanish colonial control of the Philippines in 1898 by Emilio Aguinaldo, the country’s first president. On February 1, 1902, the Philippine Commission passed Act No. 345, designating December 30 as Rizal Day.

Since 1898, the Philippines has marked Rizal Day on December 30 as a way of remembering Jose Rizal, who many people regard as one of the country’s greatest heroes. Workers are eligible for holiday compensation under the Philippines’ Holiday Pay Rule because this is a national holiday.

A hero represents goodness. By using goodness, Jose Rizal gave the Filipinos their freedom. The revolution against the Spanish colonists is said to have been started by Dr. Jose Rizal. His ability to fight for freedom in a peaceful yet effective way helped him become a national hero of the Philippines.

The Philippines observes a national day of mourning on December 30 in honor of Rizal in Malolos and all those who died during Spanish colonial rule. Rites, which take place across the nation’s provinces and cities, feature speeches, wreath-laying ceremonies, and flag-raising events. During the ceremonies, the Philippine Air Force performs a flypast.

The Philippines will not gain its independence without the bravery of its people. Rizal Day is considered to be one of the most important events because it serves as a reminder for Filipinos to pay tribute to their brave countrymen during the Spanish colonial period. It is a day to remember not only Jose Rizal, but all Filipinos who have sacrificed their lives for the Philippines’ freedom.

What’s In A Rizal Day?

Ceremonies for Rizal Day are held at Manila’s Rizal Park. At Manila’s Rizal Park, ceremonies for Rizal Day are held. The national flag is raised at the Independence Flagpole, which is often held early in the morning and is officiated over by the president and vice president. The Philippine Air Force then performs a flypast, and a wreath is laid at the Rizal monument. On this holiday, the president often delivers his annual rites, which is initially broadcast. In other parts of the nation, rites are also held, presided over by the head executive of a province, city, or town. Similar to the Manila ceremony, these rites often involve flag-raising, speeches, and a wreath-laying ceremony at the local Rizal monument.

How to Create a Rizal Day Social Media Post

Social media is a powerful tool for sharing almost anything. Therefore, use social media to remind people of Rizal Day online. By using the following guidelines, you can create an effective Rizal Day social media post that you can display on your timeline.

You can customize the post template’s background. Select the Background panel and decide whether you want to change the background color or set a background photo or wallpaper for your template. By simply picking a color or photograph, changes to the background will be visible right away.

Our Editor tool houses plenty of clipart that you can insert into your post template. Just open the Graphics panel and browse through the different categories. For a Rizal Day post, we recommend that you insert clipart of a flag or a book.

Pick from our collection of Instagram templates for Rizal Day. You can alter the template using our Editor tool. Simply select the template that you want and start customizing it on our Editor page.

2. Add an extra symbol or art.

Feel free to add more graphics if you want, as long as they fit the Rizal Day theme. To do this, open the Graphics panel and look for relevant clipart such as digital drawings or vectors related to Rizal Day. Just click and drag the preferred clipart to the template.

Open the Fill panel and write your unique quotes, poems, or just a simple hashtag in celebration of Rizal Day. You can also include a fun fact about Rizal’s life story and work. As much as possible, keep it simple and brief so that it’s easier to read.

If you are not satisfied with the default text fields provided in the template, you can add an additional text box. To achieve this, go to the Text panel and choose one of the text options provided. After selecting, you can enter your message and drag it to the desired position on the template.

When you’re finished customizing, click the three-dotted button in the upper right corner and select Save to save your post draft. You can upload it to Instagram on Rizal Day.

1. Select from any of our Rizal Day WhatsApp Post templates.

You can begin writing your own Rizal Day greeting once you’ve selected a template and opened it on our Editor page. Simply access the Fill panel and edit the Fill Text boxes’ contents there. Keep your greetings short but sincere.

Do not hesitate to include additional graphics, as long as they adhere to the Rizal Day theme. Open the Graphics panel and search for appropriate animated art relevant to Rizal Day to accomplish this. Simply select the desired graphic and drag it onto the template.

4. Add an extra photo or portrait.

You can make your WhatsApp posts much more engaging by inserting a Rizal Day photo or portrait. To upload a file, go to the Uploads panel and select the Upload Your File option. After uploading it, you can attach it to the post template.

Don’t forget to save your Rizal Day WhatsApp post draft. By clicking the three-dotted button, you choose Save from the recommended pop-up menu. Keep it for now and share it on Rizal Day.

The following are some of the interesting facts you should know about Rizal Day:

Rizal Day is a national holiday in the Philippines commemorating the life and works of Jose Rizal.

Columbus Day is an American federal holiday commemorating the day of Christopher Columbus’ arrival in the Americas in October of 1492.

It’s a fantastic idea to get ready for Rizal Day now if you intend to commemorate it this year. We can give you some inspiration with our Rizal Day ideas and examples.

You can add these activities to your Rizal Day to-do list:

Some of our most effective Rizal Day templates examples are provided below. Don’t forget to download them if you like them after checking them out. 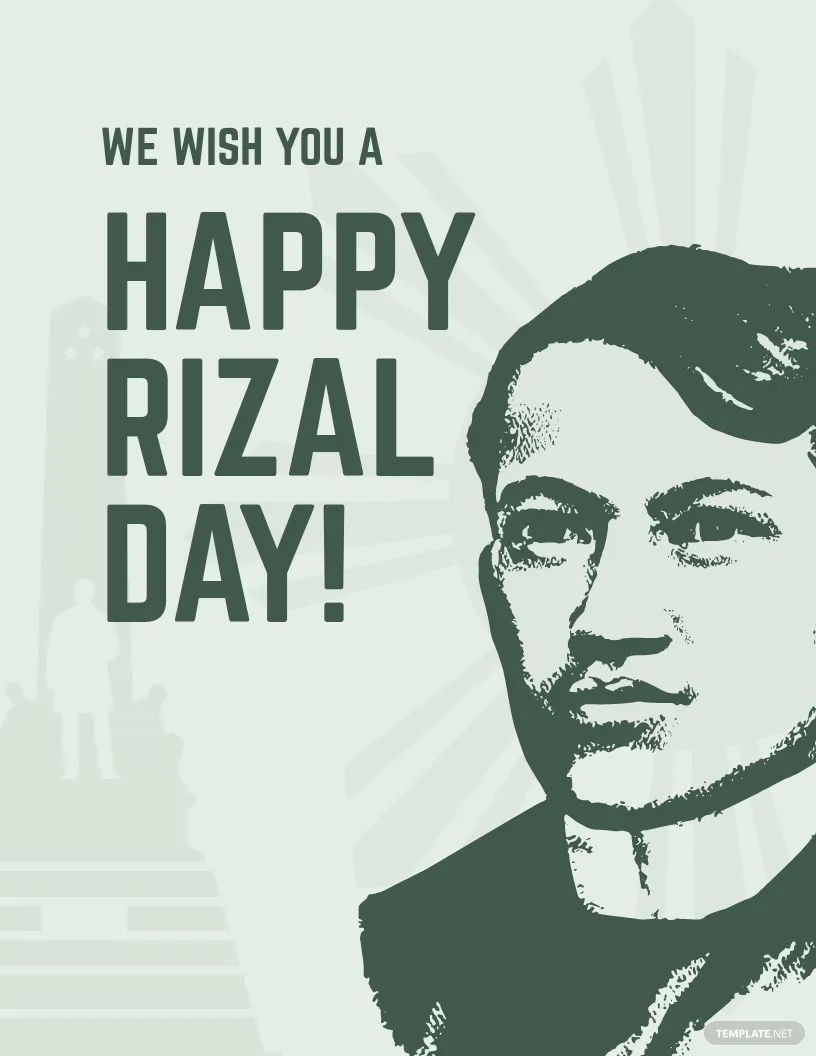 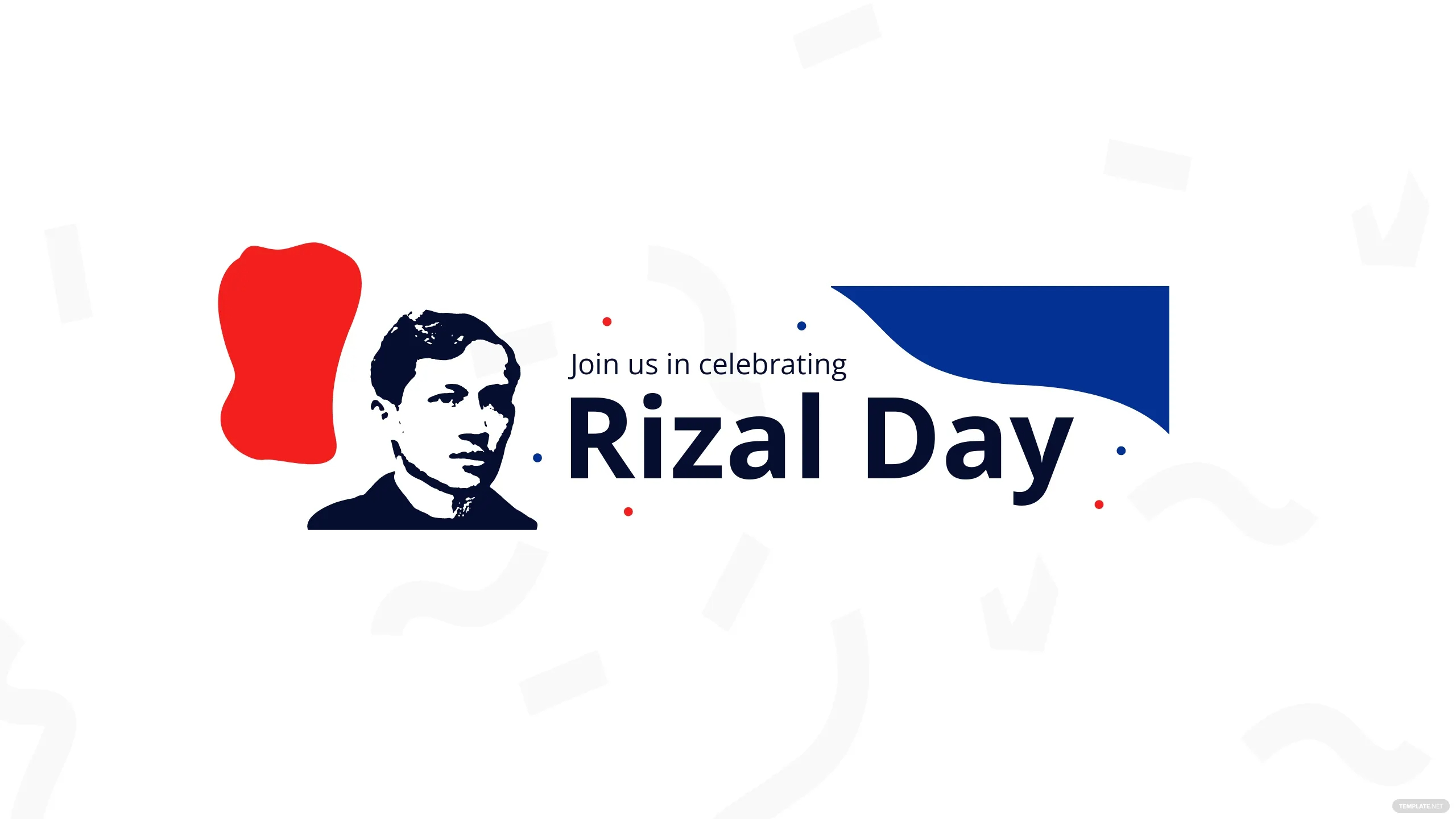 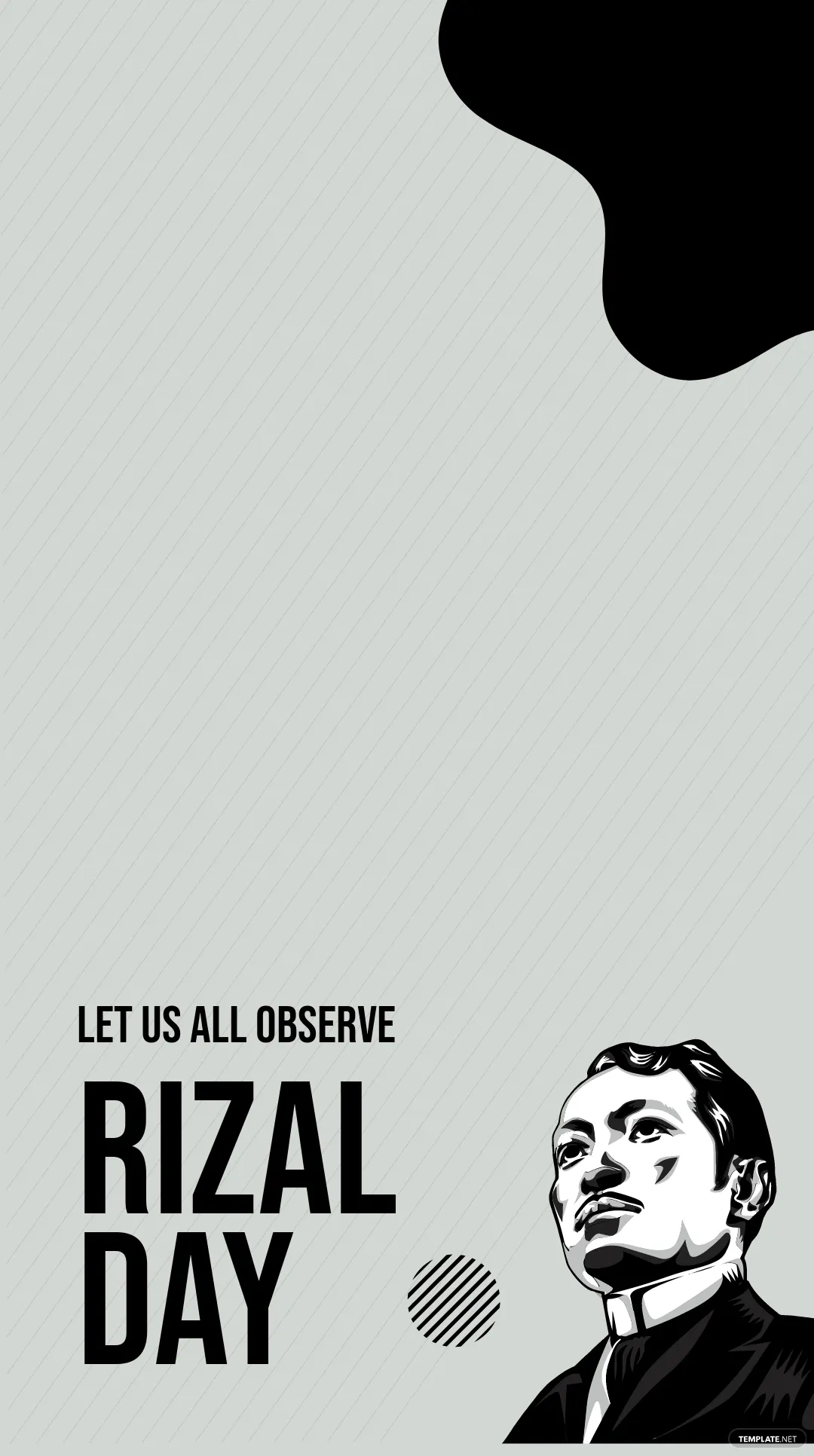 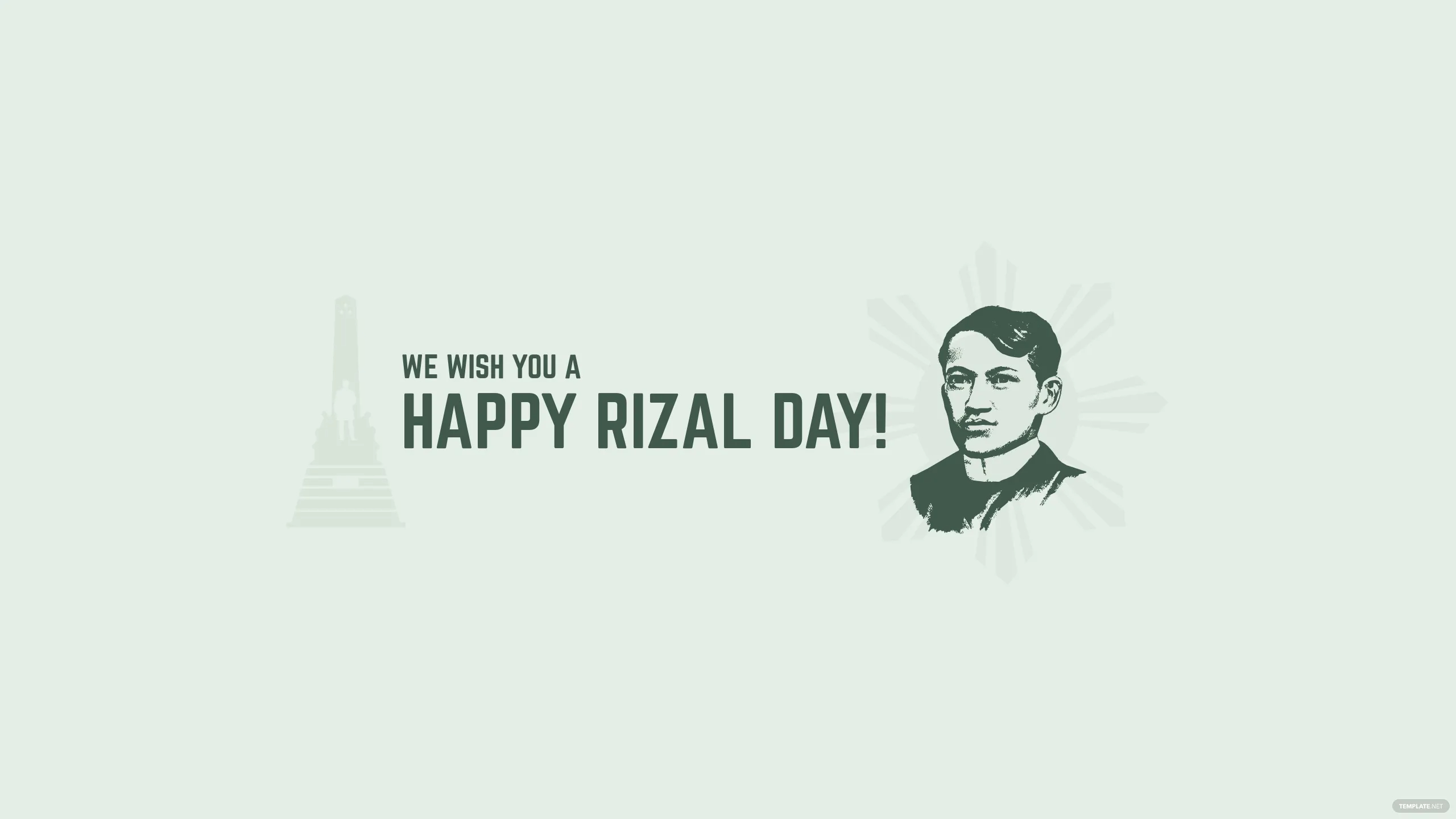 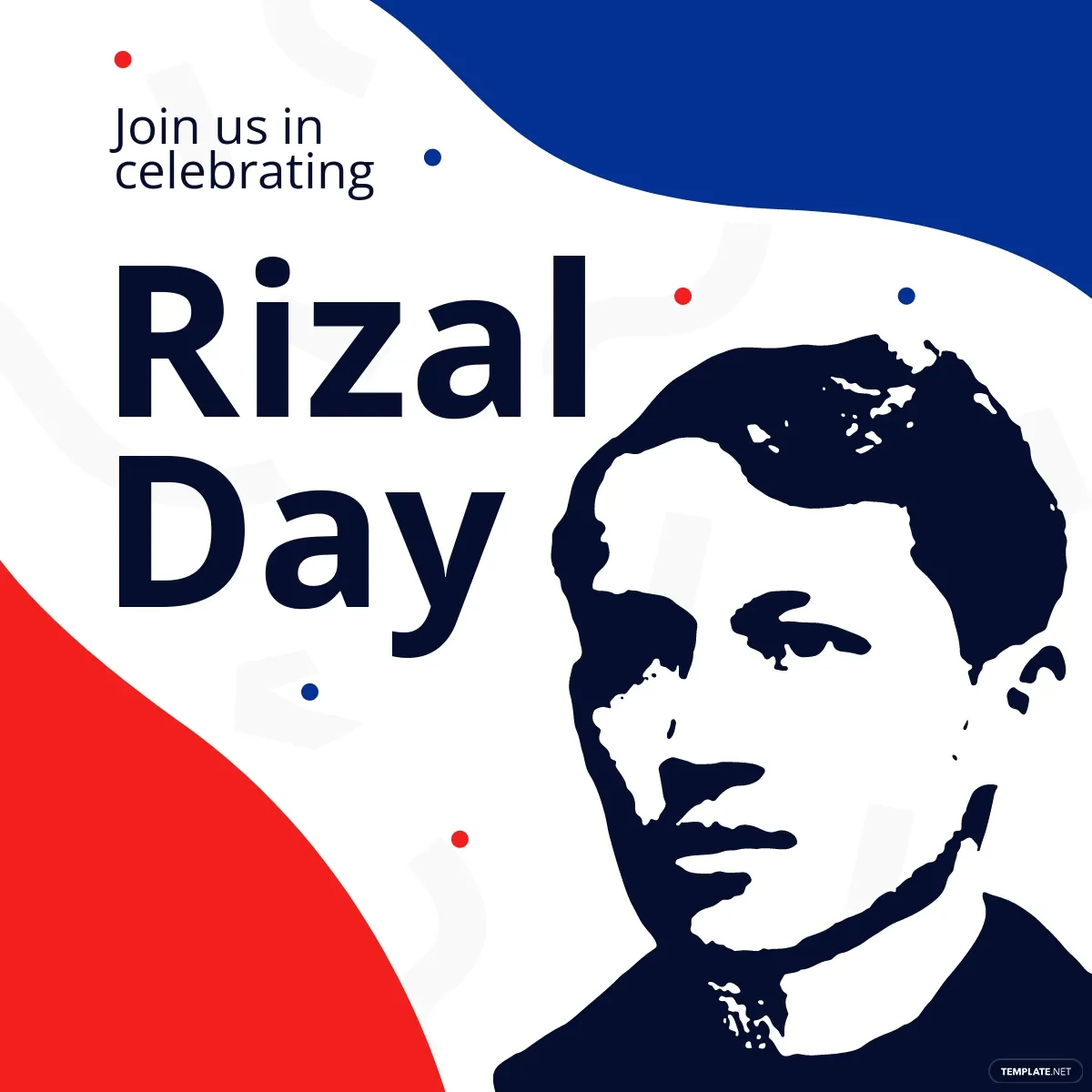 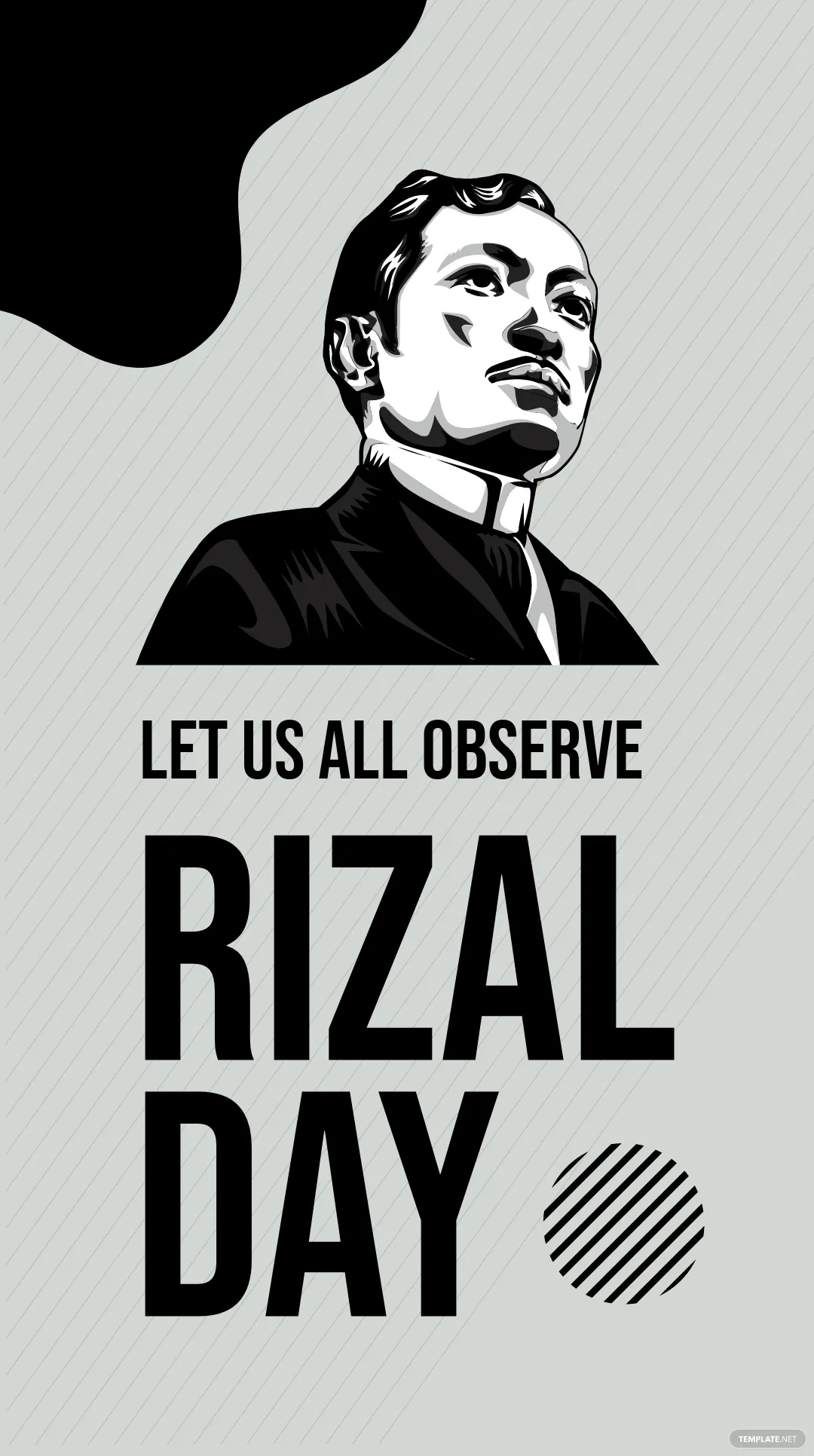 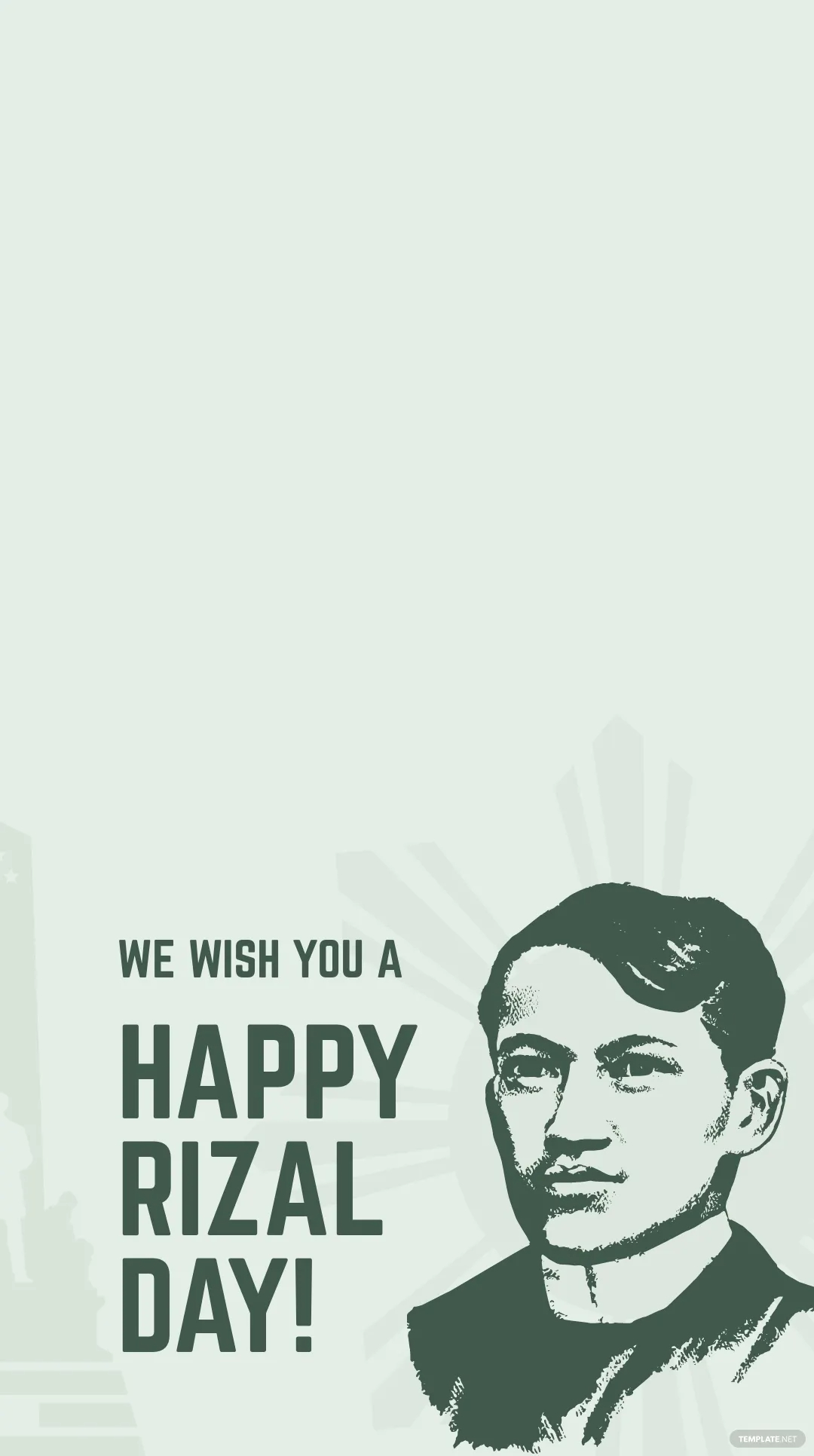 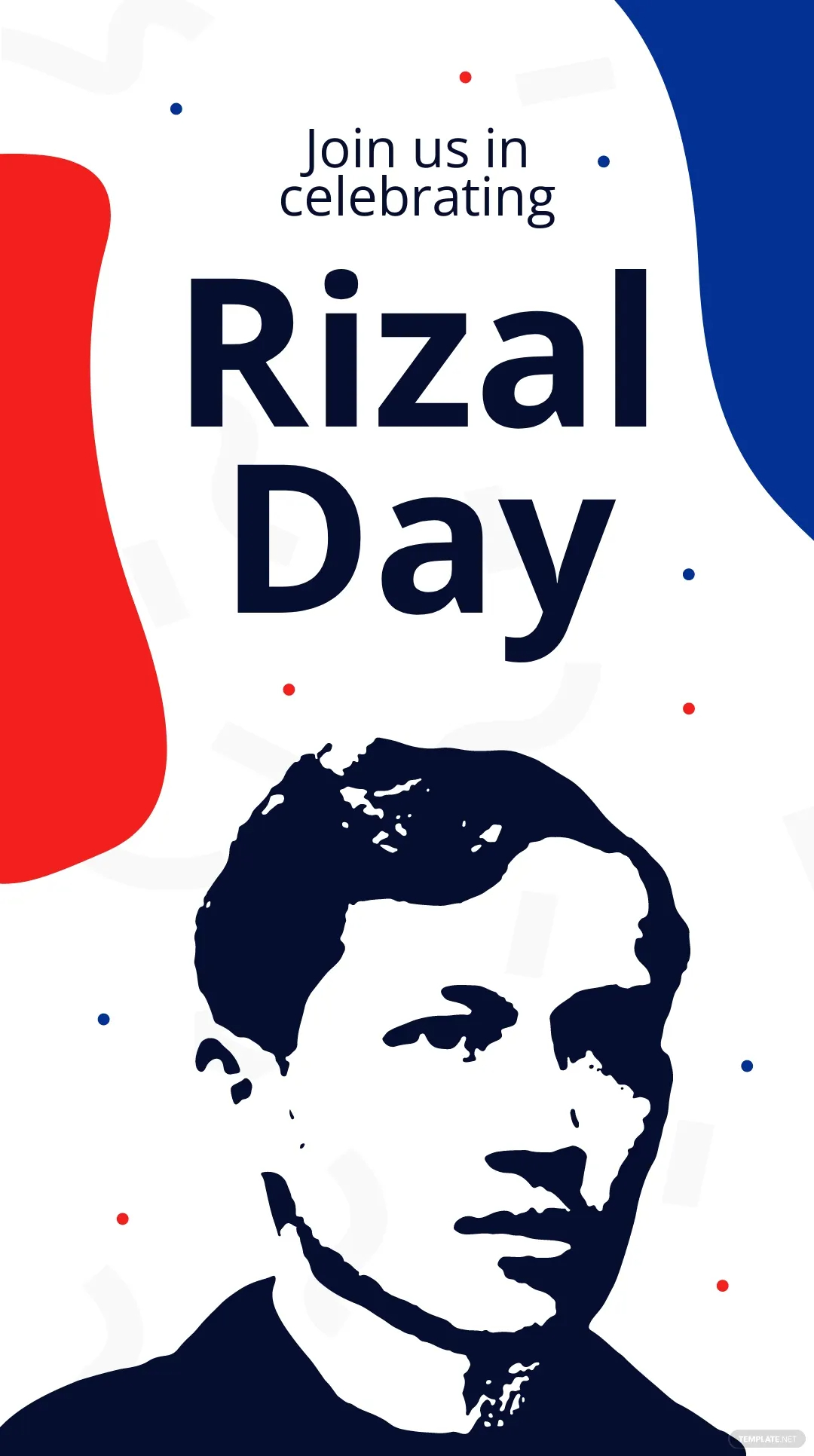 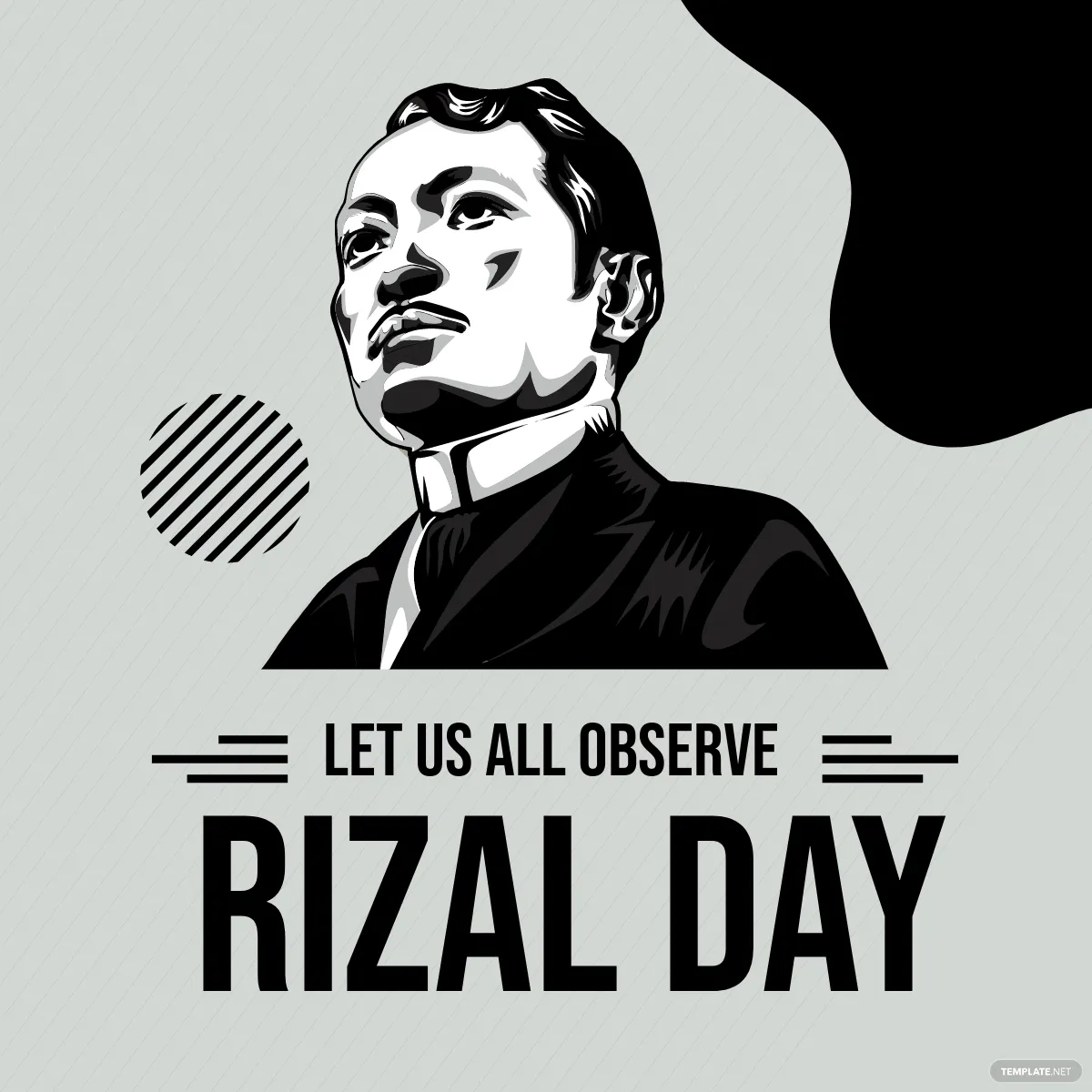 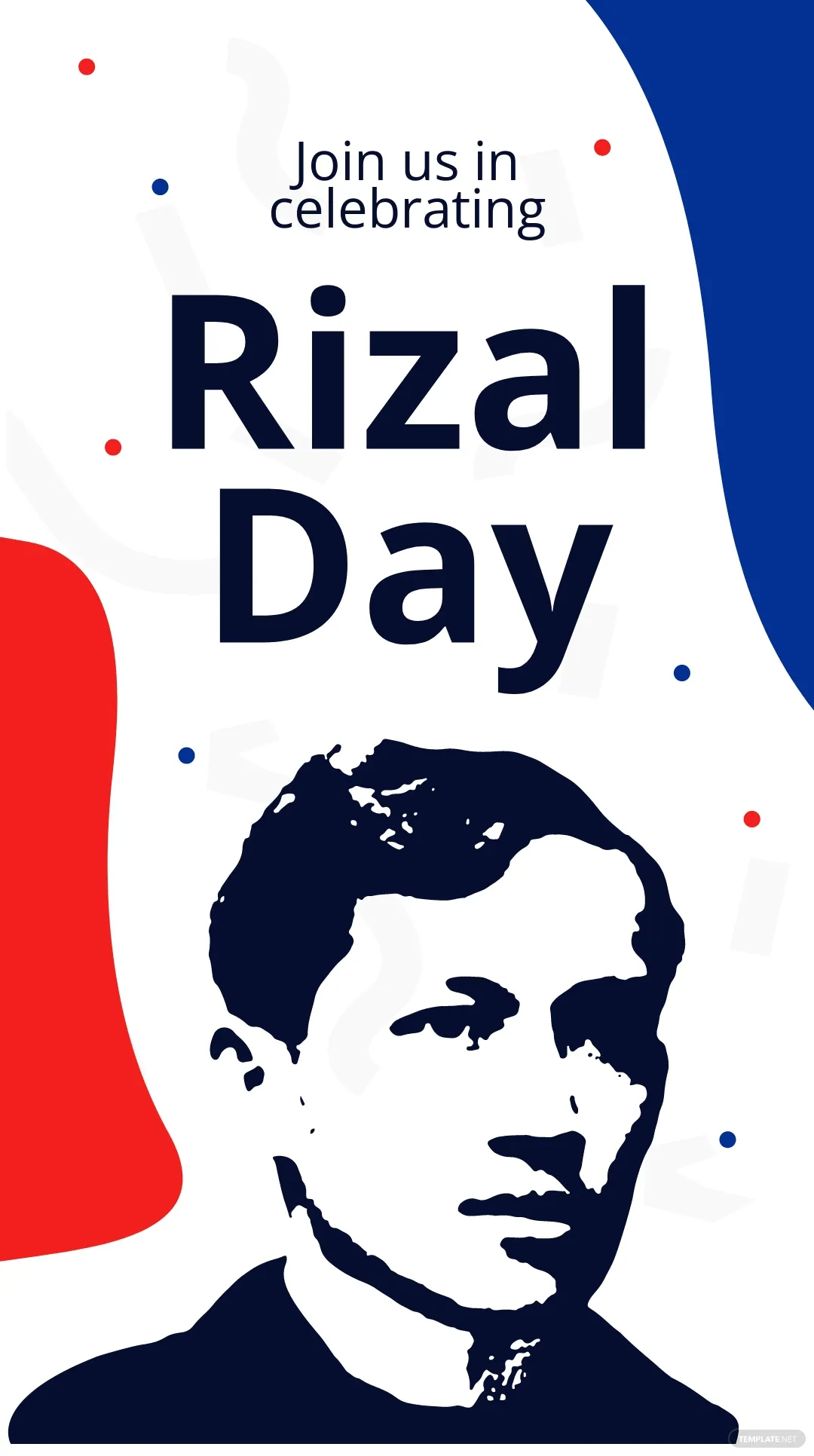 Why is Rizal called to be martyr?

Jose Rizal, the man we know from our history books to be the great Philippine national hero, was martyred for defending the cause of the country and its people under the Spanish colonization.

How do we commemorate Rizal Day?

On Rizal Day, the Philippine Air Force performs a flypast, the national flag is raised at the Independence Flagpole, and a wreath is laid at the Rizal Monument.

When was Rizal Day proclaimed?

What is the main goal of Rizal?

Rizal’s main goal was to rouse the youth of the Philippines and reform Philippine society by first exposing its flaws.

Who declared Rizal as our national hero?

Why is Rizal Day celebrated on his death?

It is celebrated on the day of Rizal’s death to remind Filipinos to honor his sacrifice and all those who died under Spanish colonization.

The law declaring December 30 as Rizal Day is known as Act No. 346.

When was the centenary celebration of the martyrdom of Rizal?

The centennial celebration of Rizal’s martyrdom was on December 30, 1996.

What is Rizal best known for?

He is best known as a nationalist and revolutionary.

Why it is important to study Rizal?

Jose Rizal’s contribution to the Philippines’ freedom makes his life an essential subject for study.

What were Rizal’s greatest and weakest attributes?

His love for his nation is his strongest quality, and his decision to forego the revolution is his weakest.

What does Jose Rizal symbolize?