Winter Solstice is a significant event, especially for those regions that experience four seasons. This is when the earth’s poles reach their maximum tilt from the sun, which for some areas is the shortest period of daylight and longest night of the year. 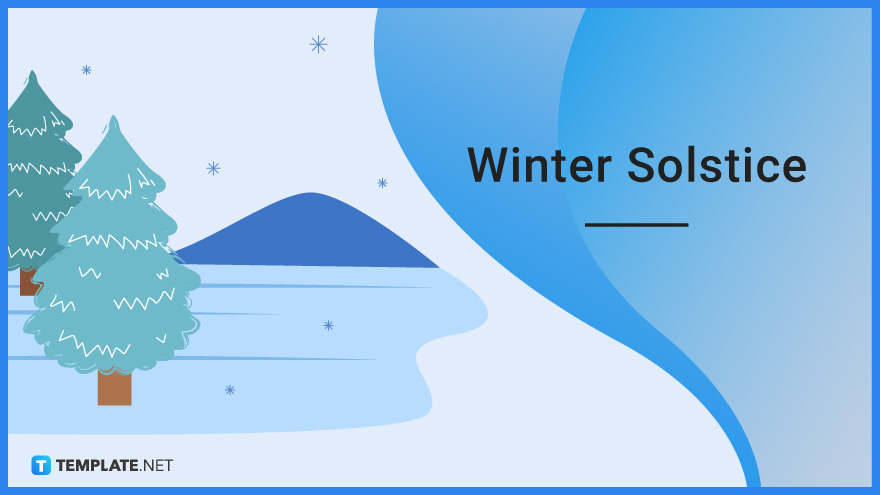 Winter solstice is the period when the earth tilts far away from the sun and traditionally it marks the beginning of winter.

This occurrence is the shortest day and the longest night of the year.

When is Winter Solstice?

Winter solstice is said to have begun as early as the Neolithic period which is the last stages of the stone age. Other cultures in ancient America and in Europe have monuments that suggest that ancient people have been honoring this event for thousands of years. The event itself is not just to mark the start of winter, but a celebration of various rituals and traditions associated with the natural world.

For most, the winter solstice marks the beginning of winter which means shorter days and longer nights till summer arrives. However, there is more to that than this environmental phenomenon. Traditions, rituals and beliefs are spun as the seasons begin to change.

Rebirth of the Sun

Winter solstice is identified as the rebirth of the sun and it is believed to be a symbolic event. Various cultures often viewed the occasion as fire and light, life and death, the rising sun, and the moon. It is a stillness, a period where the sun gradually strengthens itself and the days slowly grow longer.

Various culture around the world has their own traditions and celebrations during the winter solstice. For some, it is a time to honor the sun god, Saturn while there are cultures that refer to the winter solstice as Yule or Yuletide. Which undergone reformation and now is popularly known as Christmastide.

The beginning of the winter solstice is also the time to honor or reconnect to the natural world. This is a period of reflection and self-care since winter everything lies dormant and in darkness. This will encourage us to be with ourselves and our loved ones till the celebration of rebirth and the return of light.

Winter solstice is the time of the year when the earth’s axis tilts to a certain degree. In astronomy, it is the day when the sun travels its shortest path in the sky making it the shortest day and the longest night of the year. For some cultures, such as the ancient Celtic people it is a symbol of rebirth, renewal, prayer, and blessings. Or monuments such as Stonehenge were erected in alignment with the winter solstice sunset.

How to Create Winter Solstice?

Celebrating the winter solstice in this day and age is never complete without any social media posts. If you want to invite your friends to a winter solstice party or concert or just send a greeting card via these platforms, then we’ve got several steps to help you prepare the right template for your posts.

Head over template.net website and select a winter solstice template that matches your theme or requirement. After choosing, click on the Edit this Template FREE button in the upper right corner to be redirected to the Editor panel.

If you want to customize the current text on the template, click on the Fill button on the left side panel and from there you will be able to write down your own content. You also have the option to change the font size and colors.

Adding images is quite easy, simply click on the graphics button and from there have a wide option of clipart and images to choose from. If you need to find something specific, let’s say balloons then make use of the search button and type in the keyword.

If you want to add more beautiful photography that would suit the background of the template you are editing then click on the Background button. Look for the best photo or landscape that would fit the requirement of your design and simply click on it and automatically template gets updated.

Once you’ve chosen an Instagram post template you may now start editing. To do so, you can click on the template image and from there you will be redirected to a different screen.

2. Add a company or brand logo.

If you are advertising a winter solstice event for your company, then add a company or brand logo to your template. Click on the Logo button in the side panel and upload the image from your personal file.

If you want to add more decorations for a snow-themed event, like some snowflakes then simply click on the graphics button. Search for the image you want to add, resize or change its color to suit your requirement.

You also have the option to add tables or calendars to our template. To do this, click on the tables button on the side panel and edit your design.

If you are right about to be done, double-check your work, and if all is well save your template. Click on the three-dotted button on the upper right corner of the screen to save the template.

Choose a YouTube banner template that fits the theme of your page. After which click on the template image to start editing.

Adding fun images such as cartoon designs would brighten up your template. To do this, click on the graphics button on the side panel and choose from the available images.

If you want to add more information to your template, then just click on the Text button. From there you are given the option to add a heading, sub-heading and paragraph.

Don’t forget to save your template once you’re done. Just click on the three-dotted button on the upper right side and you have the option to save or print your work.

Winter solstice often has a beautiful and somehow enchanted ring to it since it has been one of the most venerated events by ancestors. Here are some fun facts to help you further understand what this occasion is all about.

Winter Solstice marks the beginning of the winter season, the longest night of the year, and happens twice a year on the Northern and Southern Hemispheres respectively.

Summer Solstice on the other hand is the opposite, often called midsummer this is the day with the longest period of sunlight and also happens twice a year in each hemisphere.

If you need to create a greeting card or illustrations associated with the winter solstice event then we’ve got several examples that can help inspire you. 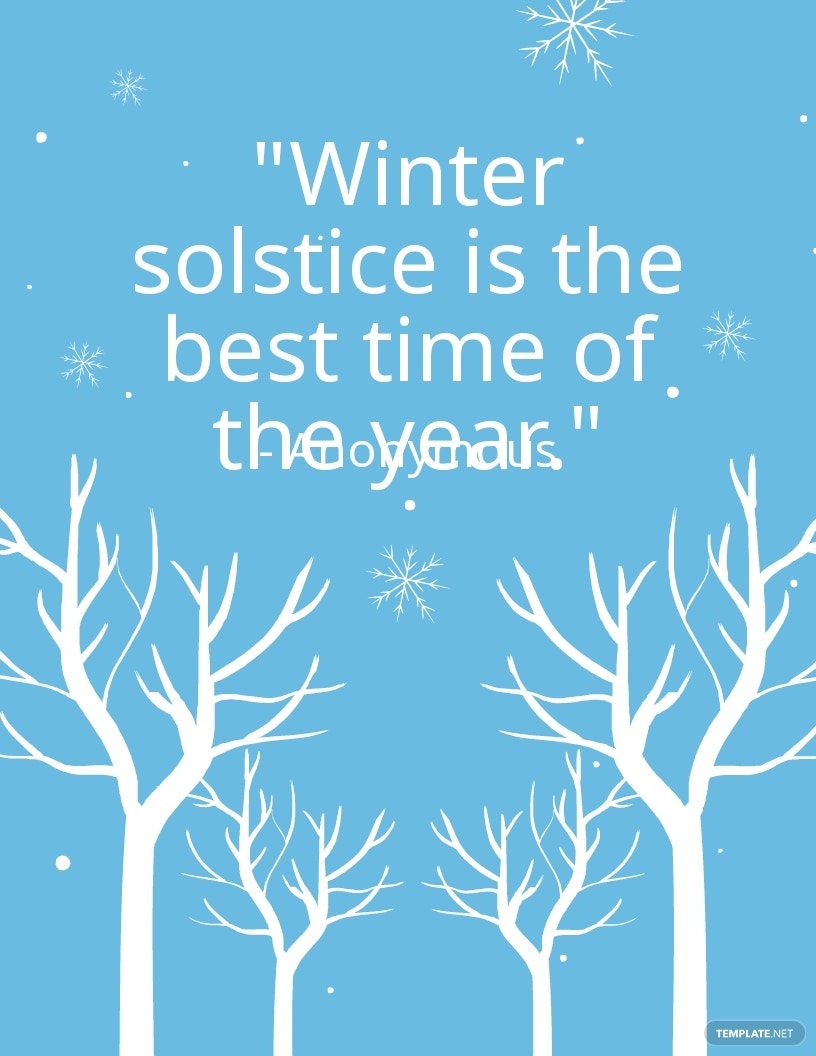 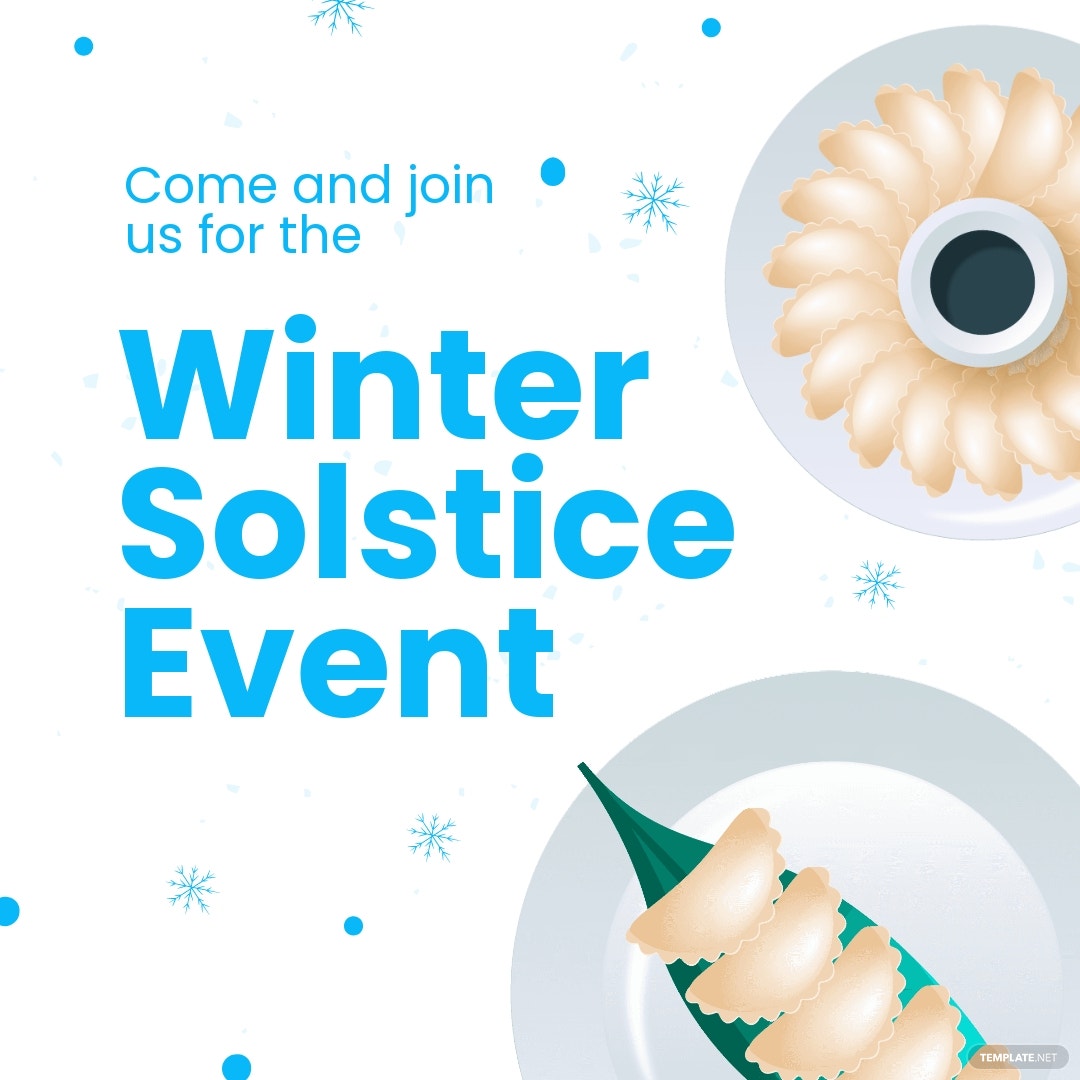 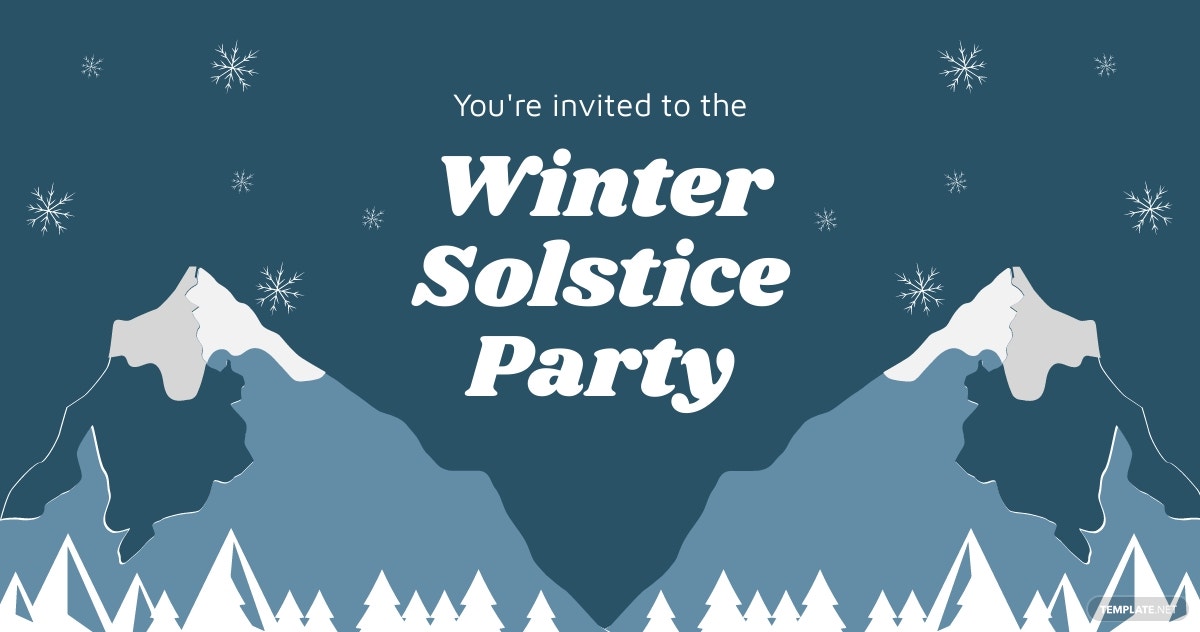 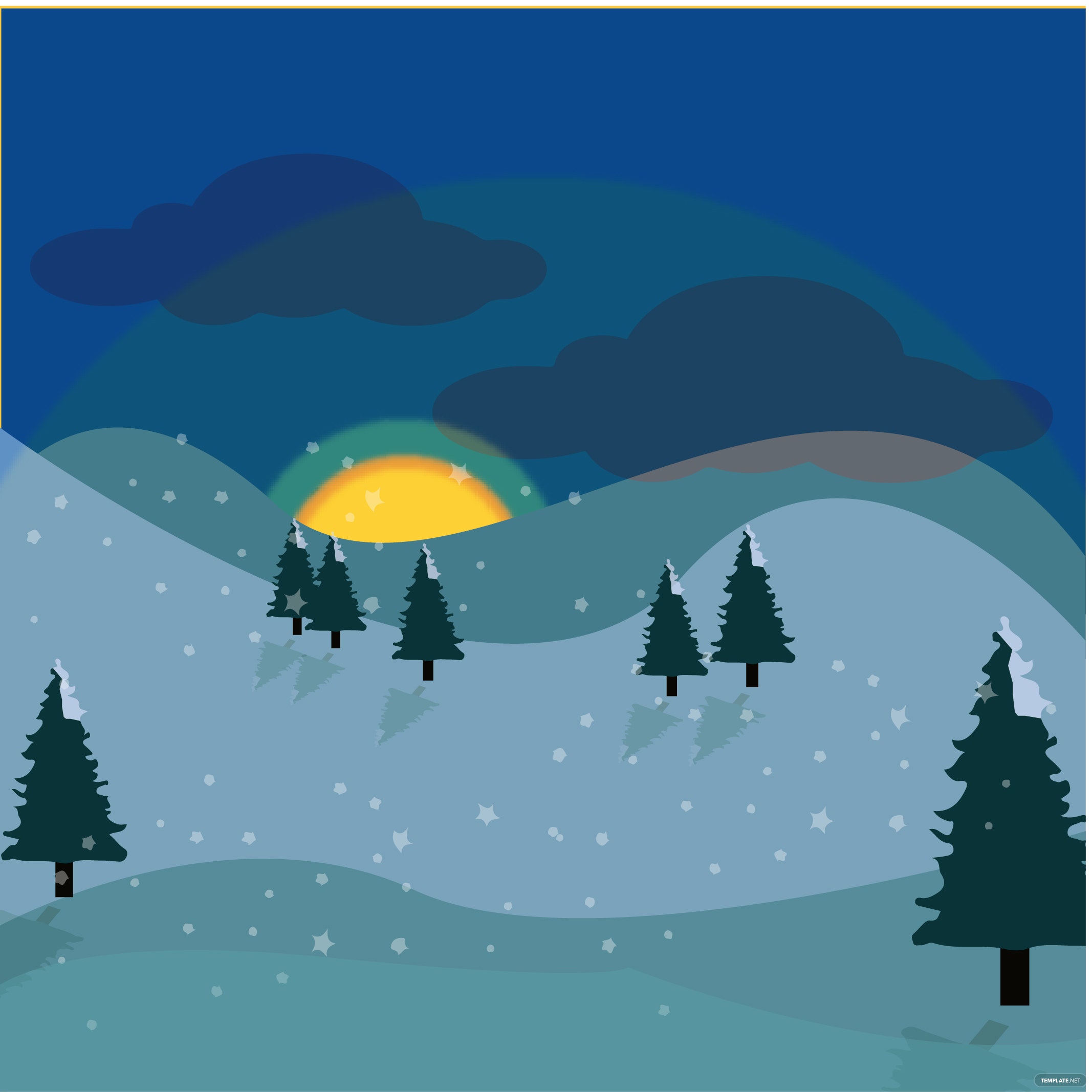 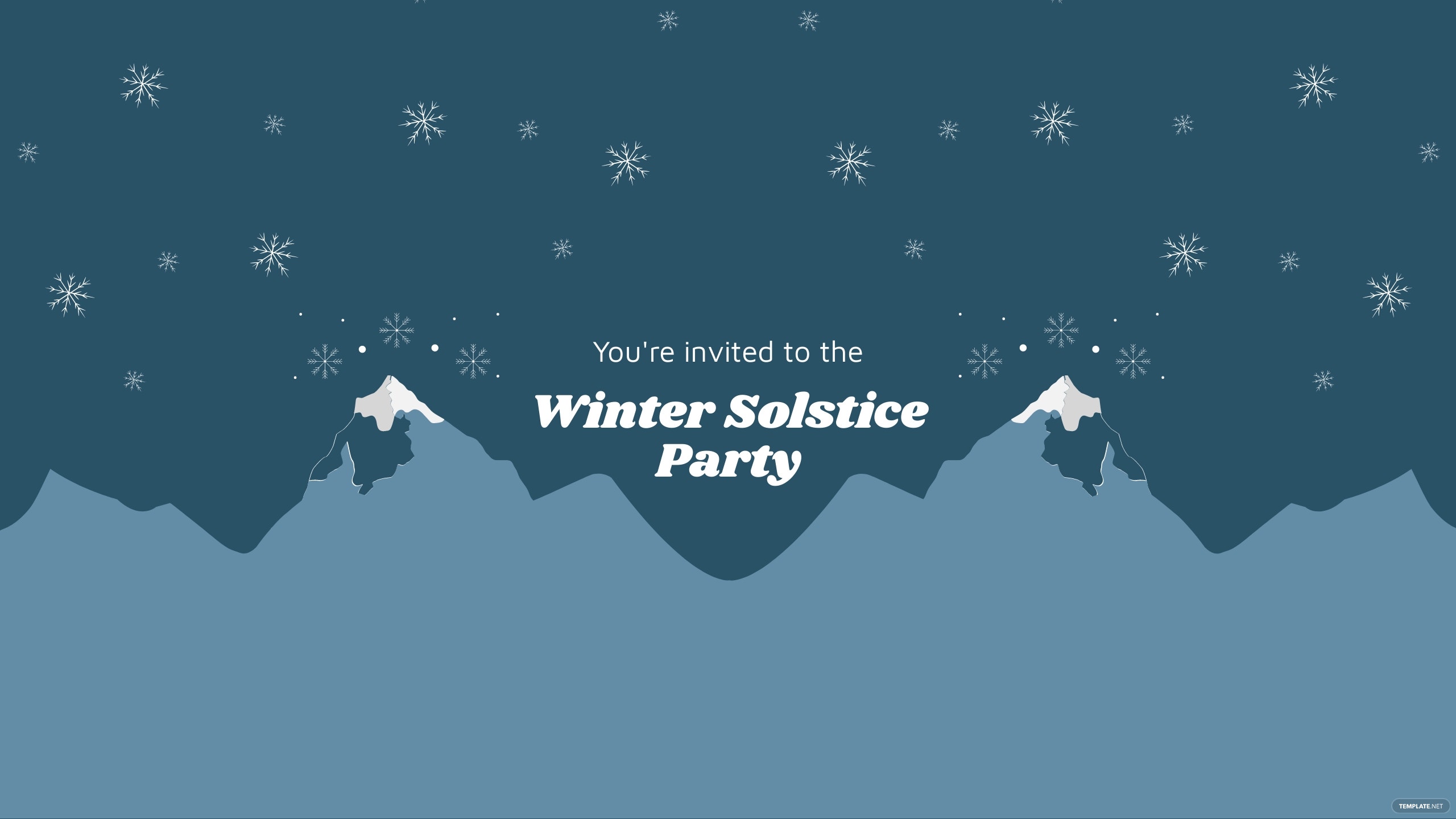 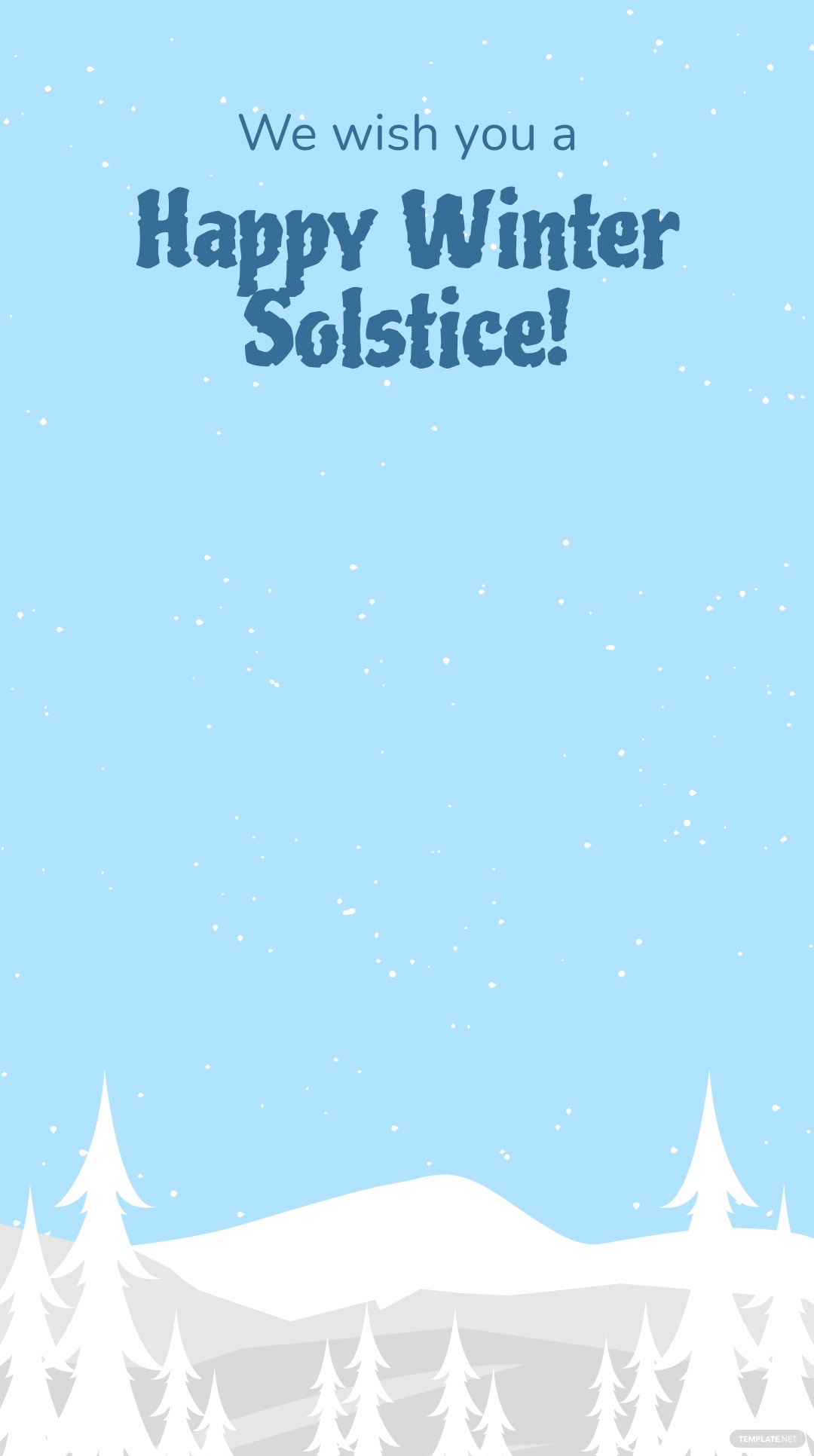 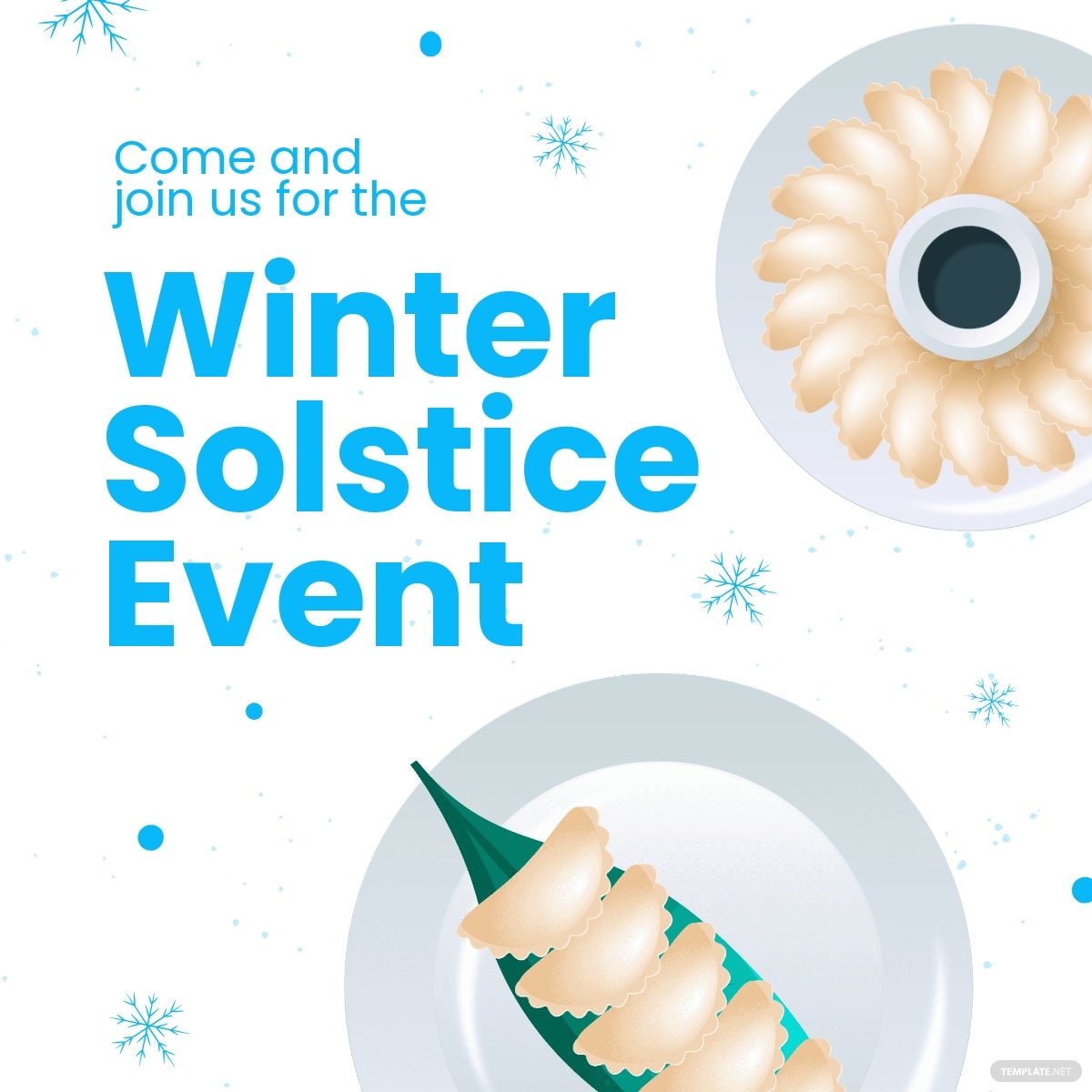 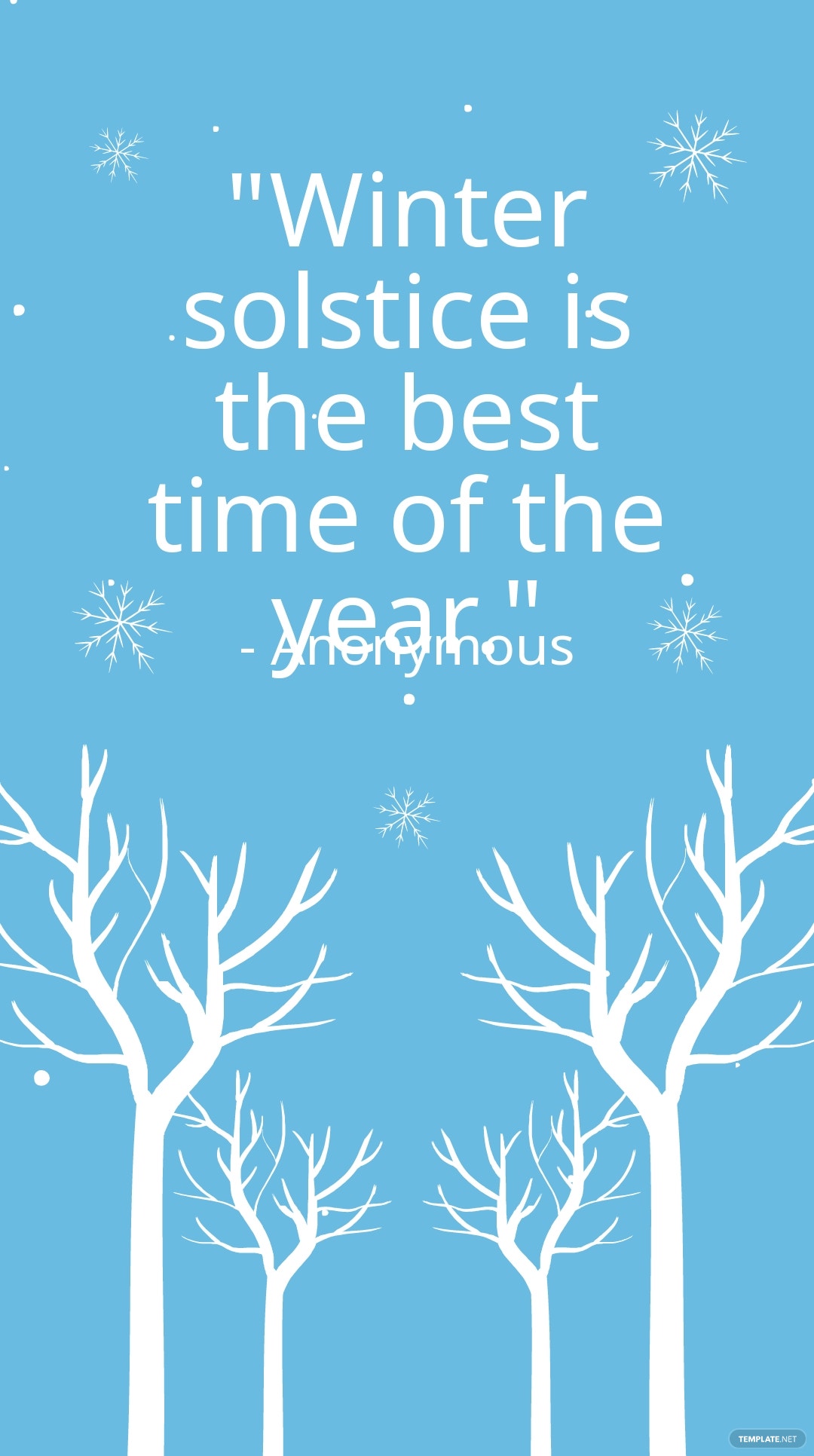 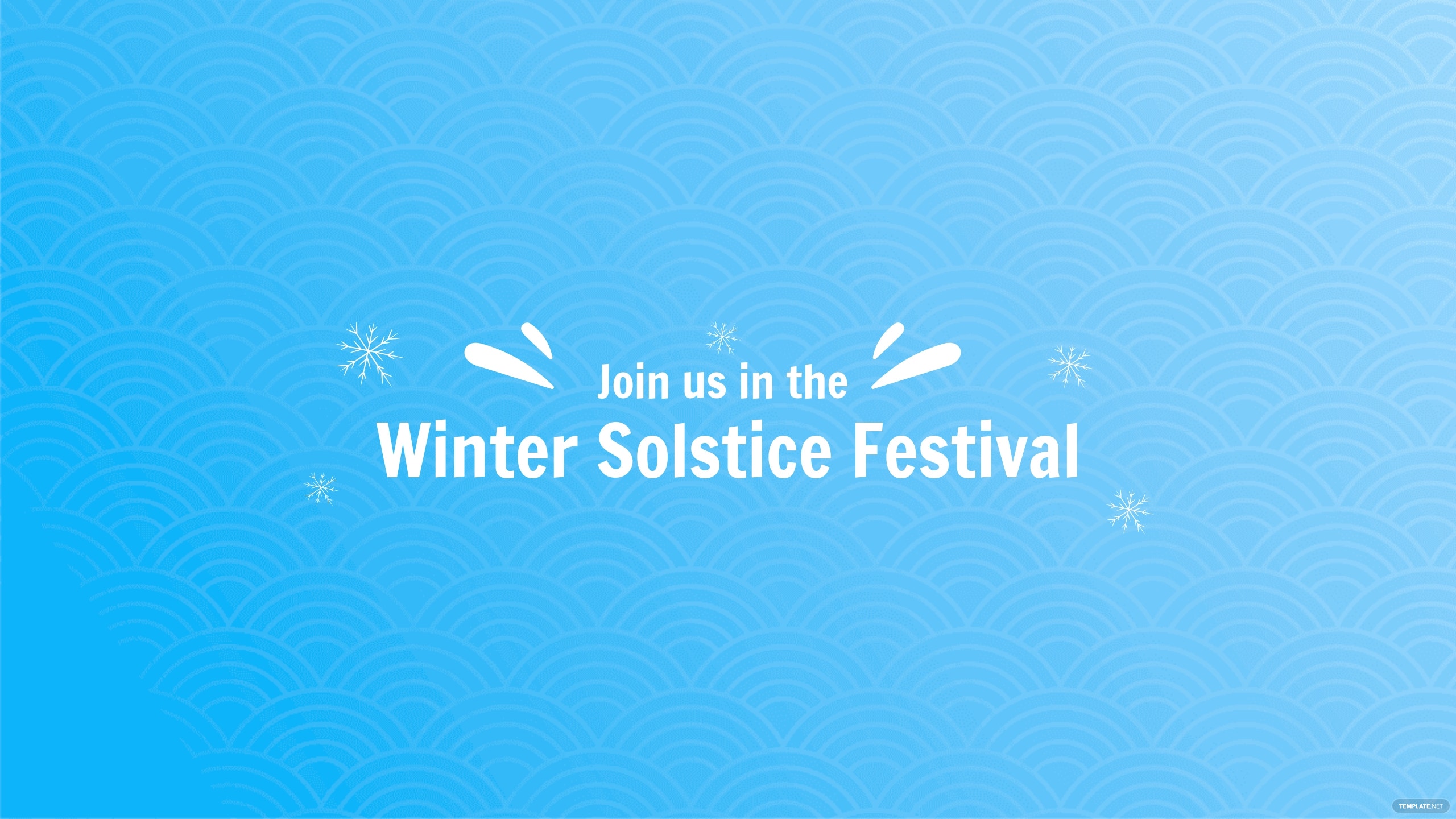 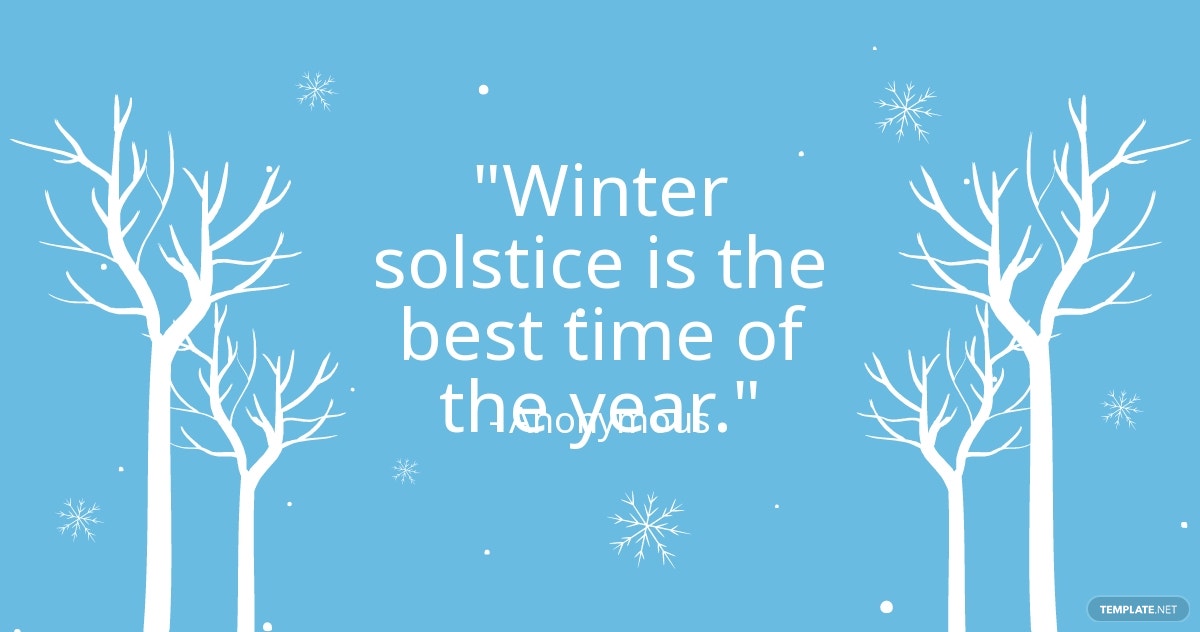 What is the Winter Solstice and Who Celebrates It?

The winter solstice is the longest night of the year and various cultures from different parts of the globe hold festivals and gatherings as part of their heritage.

What Happens on Winter Solstice Day?

Winter solstice marks the shortest day of the year since the earth is tilted farthest from the sun.

What Does the Winter Solstice Bring?

The winter solstice is said to bring in cold winter for countries that experience the four seasons.

What Do You Say on the Winter Solstice?

You can simply say ‘Happy Solstice’ or ‘Happy December Solstice’ greetings would do just fine.

Why is December 21st Called the Winter Solstice?

Although the dates may change every year, December 21st is the usual period when the earth’s axis tilts further away from the sun.

Why is the Winter Solstice so Important?

Winter solstice is significant to a lot of ancient cultures, not only does it mark the beginning of winter but largely age-old traditions have been continuously practiced up to the present.

How Does the Winter Solstice Affect People?

At the onset of the winter solstice, nights become longer and it becomes colder so it may alter your sleeping pattern and you may feel lethargic or exhausted.

What is a Winter Solstice Candle?

As part of a ritual, a candle is lit up during the onset of the winter solstice since it is said that anything that represents fire should be part of this age-old tradition.

How Do You Explain the Winter Solstice to A Child?

Explaining the winter solstice to kids can be done scientifically where you can point out that this event is associated with the earth’s axis which is why there are shorter days and longer nights.

What is the Winter Solstice Spiritually?

The winter solstice is associated with darkness and rebirth which calls for reflection and a time to work on your resolutions.

What Should You Do on the Winter Solstice?

A lot of activities could be done during the winter solstice depending on your culture, yet notably, Christmas and festivities are associated with this event.

What Do Pagans Do on Winter Solstice?

Pagans would offer food to the spirits, burning of the Yule log, cut mistletoe and give it a blessing, tell stories and poems over a bonfire and many others.

What Religion Celebrates the Winter Solstice?

Pagans and Wiccans often celebrate the winter solstice, but anyone is free to do so since Christmas and Hannukah have evolved from this occasion.

What Do Pagans Believe About Winter Solstice?

For pagans, the winter solstice is a period of darkness and the rebirth or the return of the sun thus festivities and rituals are being practiced.

Who is the Pagan God of Winter Solstice?

There are a lot of Pagan gods associated with the winter solstice, notably are of Norse and Celtic deities.

What Does the Winter Solstice Symbolize?

Symbolically the winter solstice represents rebirth as it is the time when the sun gradually becomes brighter as each day passes by.

What is the Difference Between Winter Solstice and Summer Solstice?

The main difference is the seasonality and the fact that winter has longer nights while summer has longer days.