Easily Strike Profitable Deals Using Our Agreement Between Two Parties Templates on Template.net! Whether You Need to Create Simple Contracts, Business Contracts, Loan Agreements, Partnership Agreements, or Agreement Letters, These Sample Legal Documents Can Help You! Every Word is Editable and They Follow Standard Format! Feel Free to Click Download!

A partnership between two parties must be sealed through an agreement. To avoid misunderstandings and conflict, you must have a reliable and legal agreement between two parties. For your convenience, we will provide you high-quality Agreements Between Two Parties Templates for an effective and professional agreement between two parties. Our templates are guaranteed and 100% customizable, easily editable, and professionally written that are useful in your wide-range agreement deals. It comes with the convenience of printing it to all the readily available sizes like A4, US size, and A3. What are you waiting for? Use our advanced products now to boost your social status.

What Is an Agreement between Two Parties?

How to Make an Agreement between Two Parties? 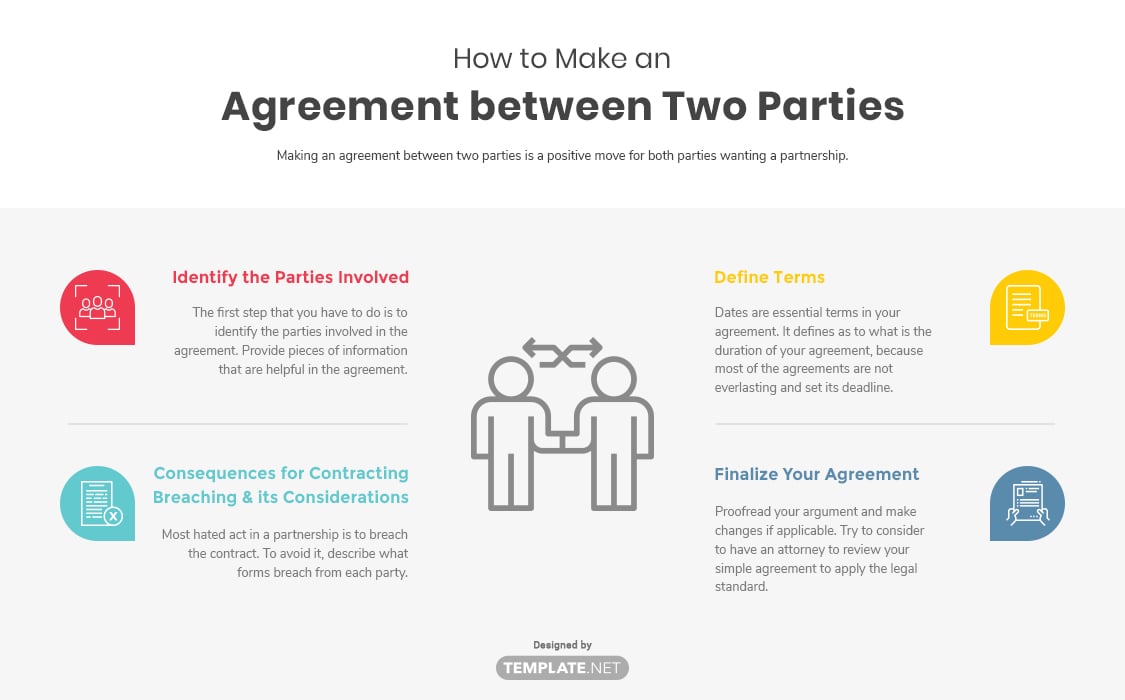 Dates are essential terms in your agreement. It defines as to what is the duration of your agreement because most of the agreements are not everlasting and set its deadline. Also, if there is a termination before the said expiration date, the violator must comply with the compensation of the said action. State also as to how and where the payment would be enclosed if the compensation is in cash form. But if one cannot comply with the payment, one can request a sample loan agreement between two parties from the opposing party. Define also terms of possibilities of events that will occur in the contract period. It is up to the parties to have conditions about it or not.

3. Consequences for Contracting Breaching and its Considerations

The most hated act in a partnership is to breach the contract. To avoid it, describe what forms breach from each party. Generally, it is considered a contract breaching if one party fails to comply. If possible, search for laws that comply with your conditions when it comes to breaching a contract. But make considerations because there are inescapable circumstances that we tend to experience that hinders us to comply with the agreement. According to the benefit-detriment theory, "an adequate consideration exists only when a promise made to the benefit of the promisor or to the detriment of the promisee, which reasonably and fairly induces the promisor to make a promise for something else for the promisee." Mediation is the best option as it maintains your relationship with your partner, and it also cost less money and effort. If one occurs and mediation has no effect, the possibility would be that everything between them goes back as to what it is before the agreement.

Proofread your argument and make changes if applicable. Try to consider having an attorney review your simple agreement to apply the legal standard. If it is finalized, sign your agreement together with your partner and secure a copy for yourself. Seal it with a handshake and hope for a better partnership with the other party.