The evolution of musical genres led to the idea of concerts in the 1960s the height of rock ‘n’ roll. Because of the success of these events, fans wanted more of the concert experience. The experience attracted large crowds which lead to the idea of a festival-type concert. People attend for both the musical and social experience. Today, music events are anticipated every year. The tickets are sold out weeks before the event. If you have plans to organize an event as large as Woodstock, you better start hyping the people through the tickets. We have a list of festival concert ticket templates that you can use for your event. 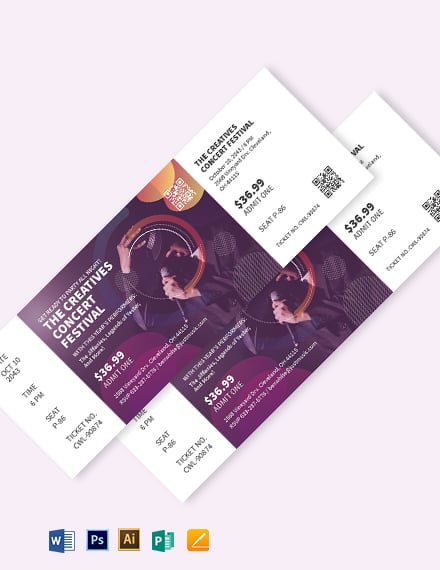 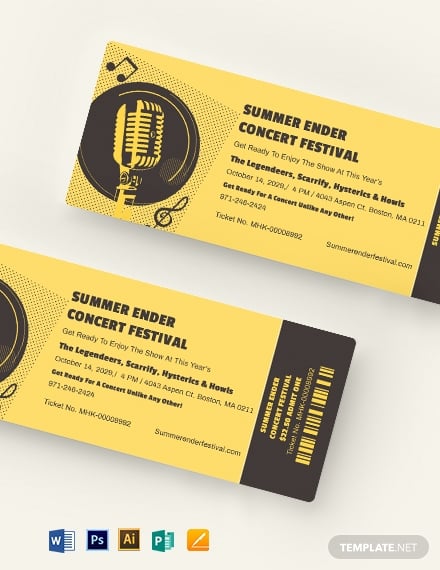 In a historical context, concerts are closely linked to religious activities. Renowned musicians and instrumentalists, such as Beethoven, Mozart, and Handel, had their first concerts in small halls. Rich patrons also hired musicians to play in their homes when there are celebrations. The concerts we have now have progressed by leaps and bounds, that’s why it makes sense to create concert festival tickets using the template shown above, as a guide. Go ahead and hit that download button now!

4. Save The Date Concert Ticket Template 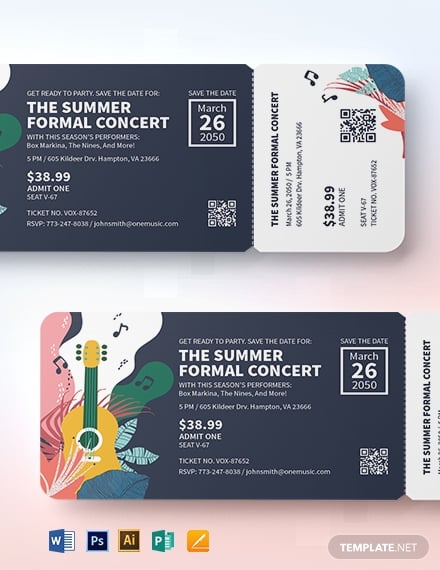 As concerts attracted more and more people, the available venues were no longer sufficient. Outdoor concerts started to cater to this concern. One most notable outdoor concert experience was Woodstock, a 3-day concert festival, back in the 1960s. Recent years produced other remarkable outdoor festivals such as California’s Coachella. Design a ticket worthy of today’s most popular summer music festival by downloading this Save The Date Concert Ticket Template! 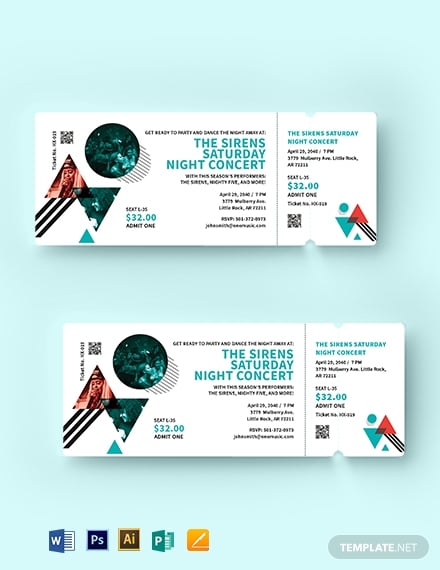 Concerts became avenues for fans to gather and celebrate the music of their favorite bands. The social interaction with other fans makes the experience more remarkable and memorable. As you organize your festival concerts, make sure to design a ticket that can serve as memorabilia that the attendees can look back when they want to remember a good time. You can start by taking advantage of the ticket sample shown above!

A single concert ticket contains a lot of information. It gives the name of the event, date, and location. Additionally, it also indicates the price, serial code, and seat number, if applicable. It also states if the ticket is for general admission or VIP entry.

Step 2: Have an Appropriate Design and Layout

As promotional material, a ticket should be visually appealing. To achieve such, it should have an appropriate design fit with the theme of the concert. The colors and graphic elements should complement each other. The goal is to convey the same message with or without the text.

To aid in making the ticket more appealing, the fonts used should also be complementary to the whole look of the ticket. As pretty and fancy the font is, if it is not readable, it has no use. Keep in mind that all the texts on the ticket are crucial so it should be clearly stated, in terms of semantics and typography.

The perfect images make the event seem more exciting. These images heighten the emotions of the fans. Common pictures that are included in concert tickets are photos of the main performers and large crowds in front of stages.

The quality of the paper is also a vital factor to consider. Most concert tickets are printed on sturdy paper, especially if the distribution happens days or weeks before the event. The print is also more accurate on high-grade paper. 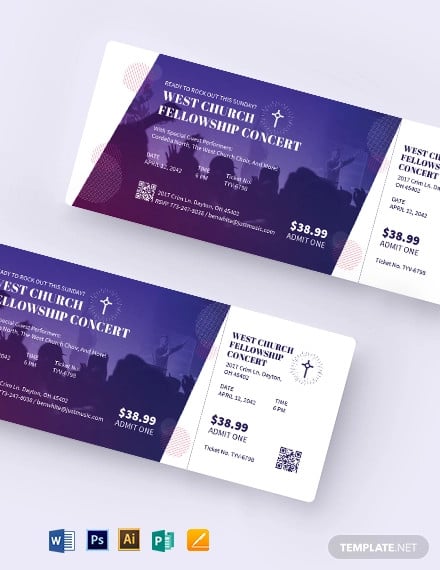 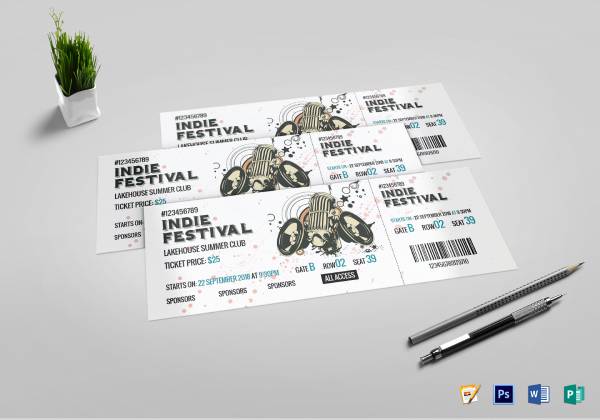 The 1990s was a remarkable time for the music scene. Various genres gained traction such as hip-hop, pop, and RnB. Until now, artists continue to reinvent music by trying out new styles and tones. This reinvention opened up new music scenes. Music festivals are great opportunities to introduce new artists and music styles. Bring that 90s music atmosphere with the help of this Festival Concert Ticket Template! 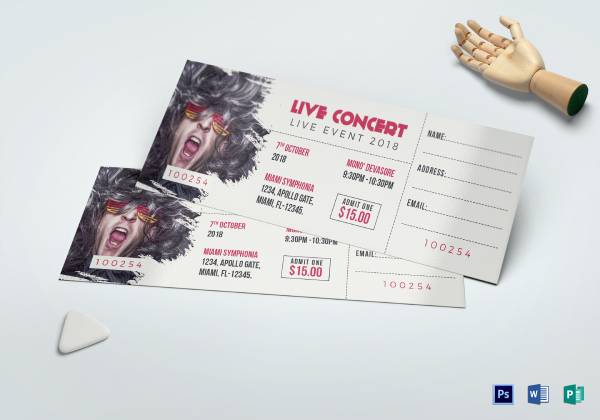 Now, there are concerts in both the local and international scene. Organizers and artists start the preparations months before the concert date. Promotional materials are released for publicity, both print and digital. These steps are done to ensure that the news about the concert reaches a wider audience. 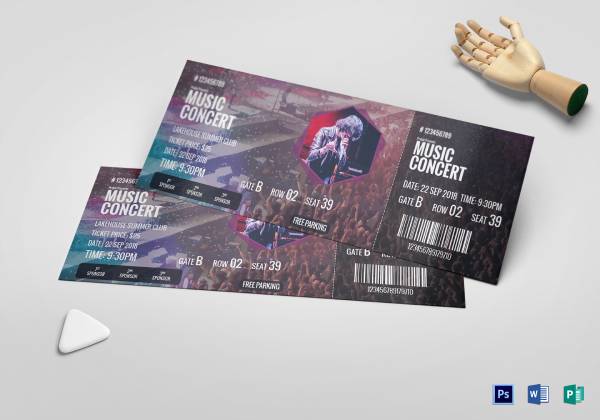 Initial concert planning includes designing promotional materials such as flyers, posters, and concert tickets. Adding pictures of the main performers hype the excitement of the fans. If you want to achieve that look and feel for your concert ticket, you can use this Music Concert Ticket. This template is fully customizable in all versions of Adobe Photoshop. 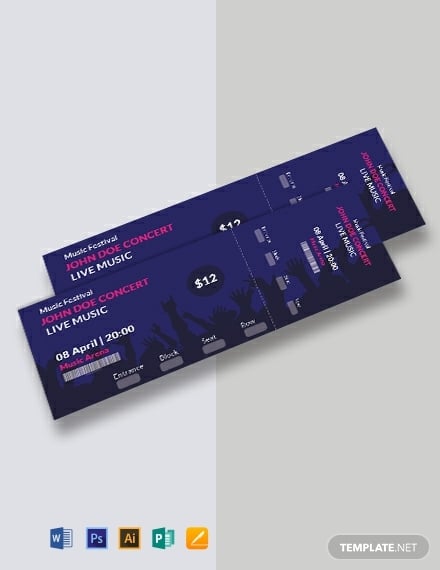 A ticket is also another form of advertising material. With the everyday use of social media platforms, the concert attendees can give free publicity for the event. The goers take photos of their tickets and post it online, which can reach other interested fans. 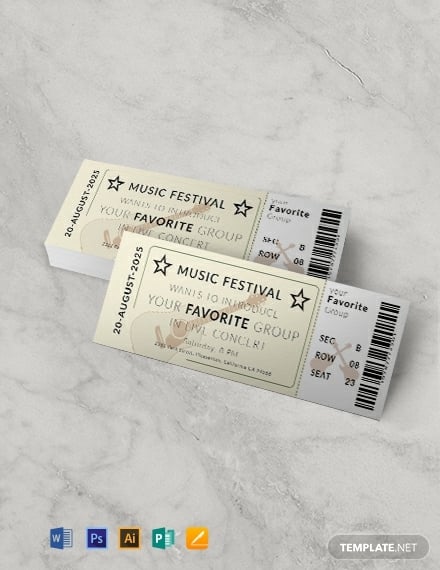 The ticket design should correspond to the theme of the event. Some festival concerts celebrate different bands with similar genres. You can showcase the common genre in the ticket so that you can attract the right crowd. This Vintage Concert Ticket can be used for concerts that highlight bands with vintage music and retro vibe. 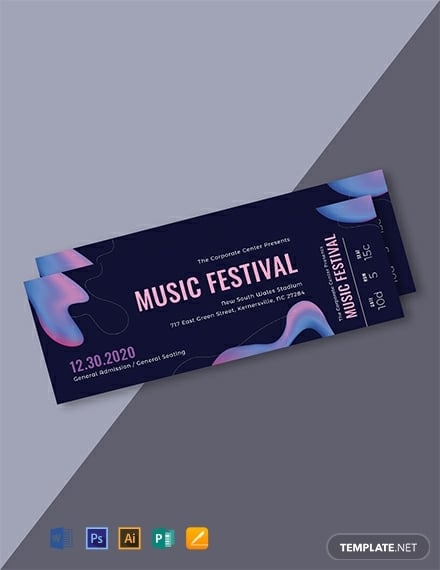 Most music festival venues are on large grounds where the people stand throughout the event. The area is divided into several sections. Each section has different ticket price points. This information should be indicated on the ticket, as well. This info helps in the organization and security of the event. 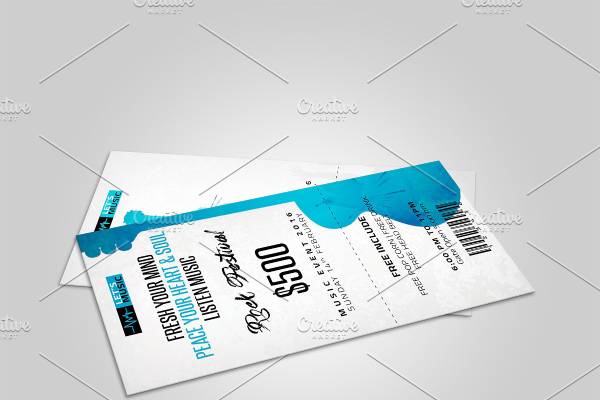 Music festivals do not only invite established bands and performers, but it is also an avenue for newer acts to make a mark in the music scene. Concert festivals should, ideally, have brochures samples to present the newer or first time performers in the line-up. This does not only help promote the up and coming acts, but it also helps the audience know more about them. 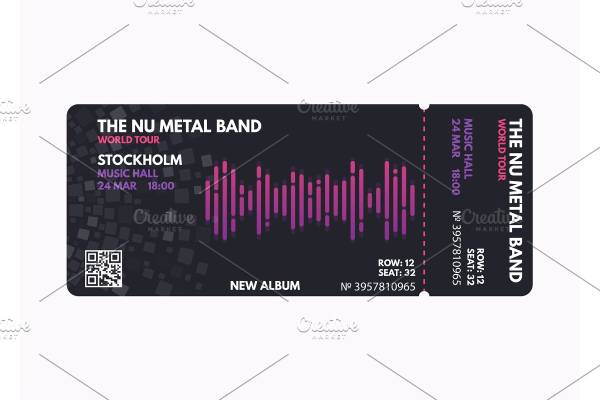 Take advantage of advanced technology by including a QR code on your concert ticket. By scanning the code, it can directly lead the ticket owners to the site of the event that contains announcements and other news about the event.