Deriving its name from Wall Street in the center of Lower Manhattan’s financial district, The Wall Street Journal has been in publication since 1889. Thirty-seven Pulitzer Prizes later, “The Journal” reported a circulation of about 2.475 million copies, including almost 1,590,000 digital subscriptions as of June 2018. Just like “The Journal,” newspapers are now highly targeted to cater to a specific group of readers.

Elements of A Newspaper Template in PSD

In the early days of business journalism, a reportage of fearless, independent, accurate financial information, and analysis was such a novelty that it didn’t take long for The Wall Street Journal to be one of the country’s leading newspapers. The paper’s strong reputation would continue for more than a century. Even though you’re not planning on competing with publications as large as “The Journal,” you should always have the following elements for your newspaper design:

1. Nameplate: The simple banner appearing on the front page of a newsletter is what identifies the publication and is called a nameplate. This is usually made up of the newspaper’s name, logo, or relevant graphics and sometimes a subtitle, including your brand statement or motto. The nameplate identifies the publication from the rest, making it easily recognizable to the readers.

2. Body: This is your text or copy, excluding the headlines and any stylized text elements. At the end of the day, it’s the articles in the newspaper that makes up a large part of its content.

3. Masthead: A masthead is that part of your newspaper layout usually found on the second page but could be placed on any page as long as it indicates the name of the publisher and other important data. It may also include names of correspondents, the editorial staff, contributors, logo, addresses, contact, and subscription information.

4. Table Of Contents: Most of the time, the table of contents appears on the front page, providing a list of all articles, including special and permanent sections of the newspaper and their corresponding page numbers.

5. Headline: The headline comes after the nameplate on the front page of the newsletter, and should be the most prominent text element on the page. It should be a catchy, attention-grabbing phrase that leads the reader into the main story or article for the day’s publication.

6. Sections: A newspaper is usually published with the main sections appearing on its layouts, such as news, feature, and opinion articles on local, national, and international politics and crime as well as articles on business, sports, lifestyle, and entertainment.

7. Byline: The byline is the name of the writer or author of the article, which comes just below the headline, prefaced by the word “by.” The only article that doesn’t have a byline is the editorial since it serves as the publication’s stance. Additionally, editorial articles are usually written either by the editor-in-chief or any of the members of the editorial board. 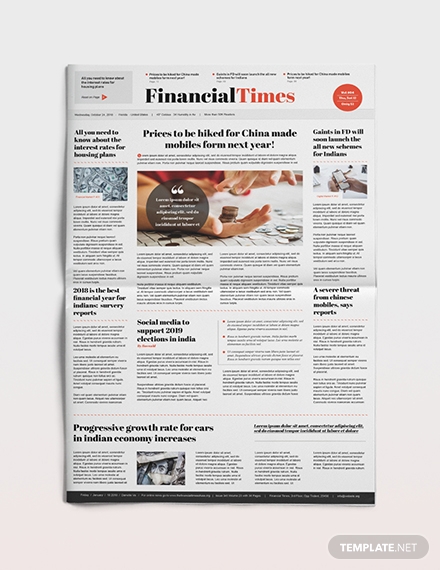 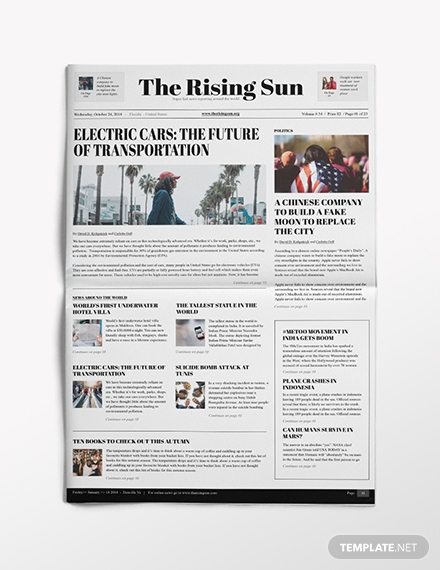 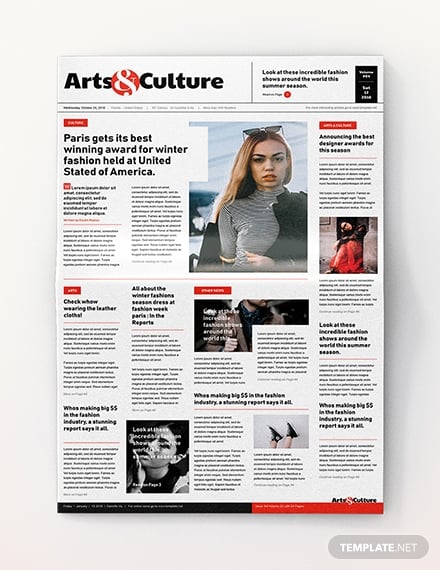 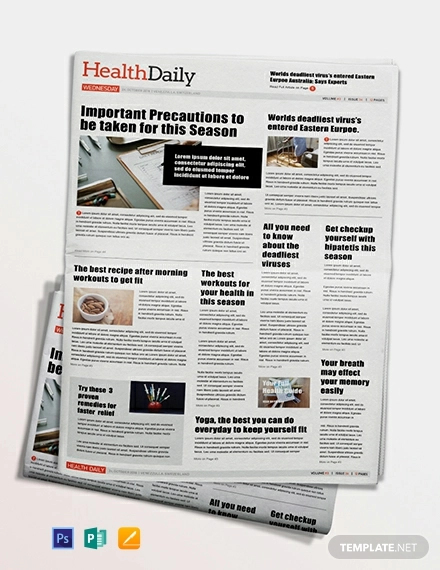 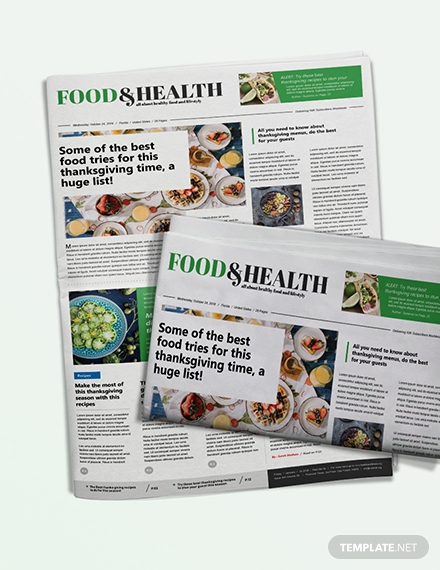 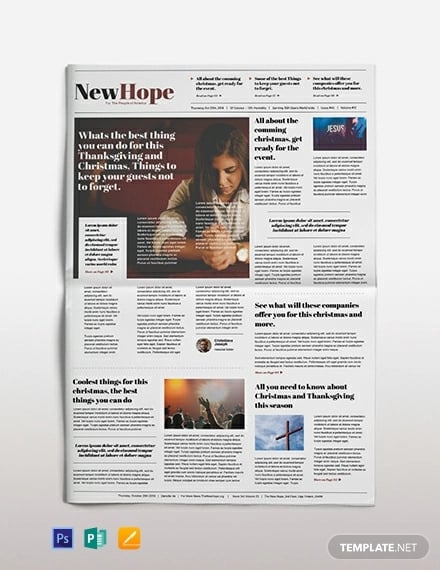 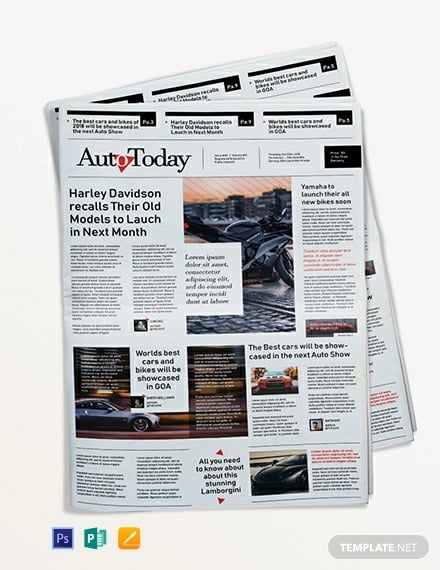 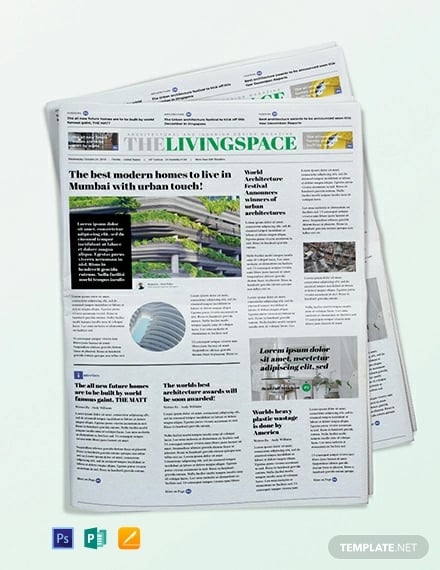 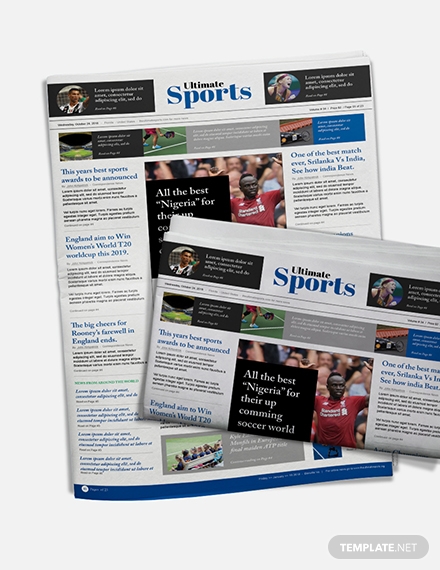 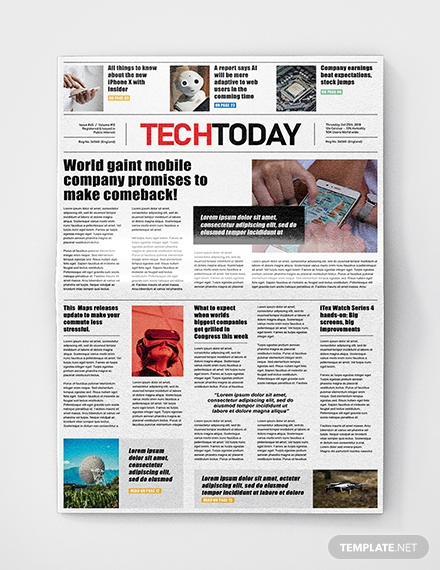 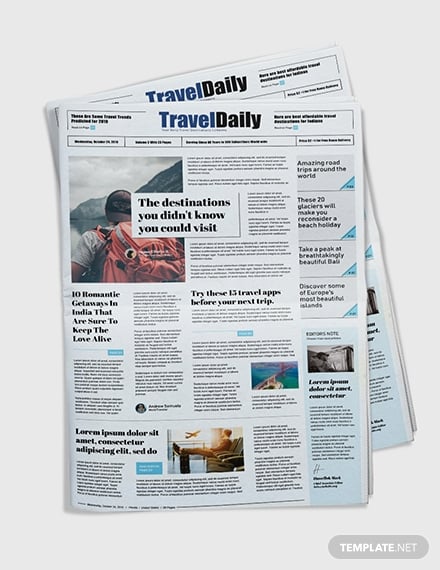 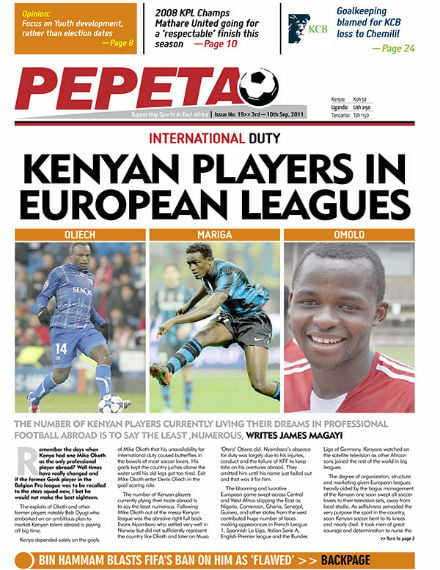 Steps to Design a Newspaper Template

To be able to pursue any form of art, you need to have a good understanding of the tools and process that leads to form it. Designing the layout of a newspaper is no different from mastering a musical instrument or nailing a great recipe. In the same way, you have to follow certain principles and steps such as what we have compiled below, in putting together a newspaper design:

1. Know your audience: As with any medium of communication, defining the purpose of your publication is largely about knowing your audience and what they need to know. Newspapers publish news about the community, school, business, or organization. These reports can be local, regional, national, or even the worst issues of global concern. After all, “good news is no news, and bad news is good news.”

2. Consider proximity: You need to be realistic about your reach. If you want to report about what’s happening in the country, you should first have local news or stories. If you have a goal to publish nationally, consider how you’ll be able to reach such a wide audience.

3. Establish journalistic ethics: Whether you’re in charge of an official student publication, a company newsletter, or an editor in The New York Times, there should be no alternative to upholding journalistic standards. For instance, zero tolerance for libel or malicious reporting and plagiarism shouldn’t be a question because these things are at the core of the writing profession.

4. Hold an editorial meeting: What is the most important and timely story or news that your readers need to know? The editorial board and staff should hold weekly or monthly meetings to agree and plan on each section of the newspaper so that you can work together with ideas on articles, special releases, exclusive reports, and the next issue’s front page layout.

5. Edit carefully: When a poorly written or grossly unoriginal article gets through the editing stages and gets published, this would say so much about the incompetence of the whole board, from the editor-in-chief down to the very last member of his staff. Be very meticulous and don’t be afraid to return or reject any work that warrants revision and rejection.

These are the most common types of newspapers in circulation today:

1. Tabloids: Technically, tabloids are newspapers that measure 11 x 11″ and are usually more narrow than a broadsheet. Since tabloids are smaller in size, their stories are also shorter and tend to be ridden with slang, usually targeted to the masses and the working class.

2. Broadsheet: Considered to be the tabloid’s more serious counterpart, the broadsheet is the go-to format for most publications. Broadsheets have come to be associated with a more demanding and authoritative writing style to the dissemination of news and follow stricter writing standards.

The newspaper templates we have attached in this article does not follow any standard size, so you’re free to customize and format yours as follows:

What is newspaper circulation?

Circulation refers to the number of copies a newspaper company distributes on an average day and is also the prime factor for setting advertising rates.

What is the difference between circulation and readership?

Circulation is simply the number of copies being distributed on an average day. Readership, on the other hand, is an estimated number of readers a publication has.

In a highly scrutinized and demanding profession, journalism remains to be the touchstone of a democratic society with newspapers keeping us informed and updated about what’s happening around the world.