Avoid disputes or misunderstandings in your business deals using contract agreements. Instead of manually making one, why not download our Simple Agreement Templates. Make it easier in making an agreement with a client. Reassured using these templates is convenient and less hassle. We offer 100% customizable, beautifully designed, easily editable, and printable templates that will suffice your document needs. Our templates have default content that is professionally written by our talented writers, making sure that the flow and content are correct. What are you waiting for then? Subscribe now and do not miss out on amazing deals.

What is a Simple Agreement?

How to Make a Simple Agreement? 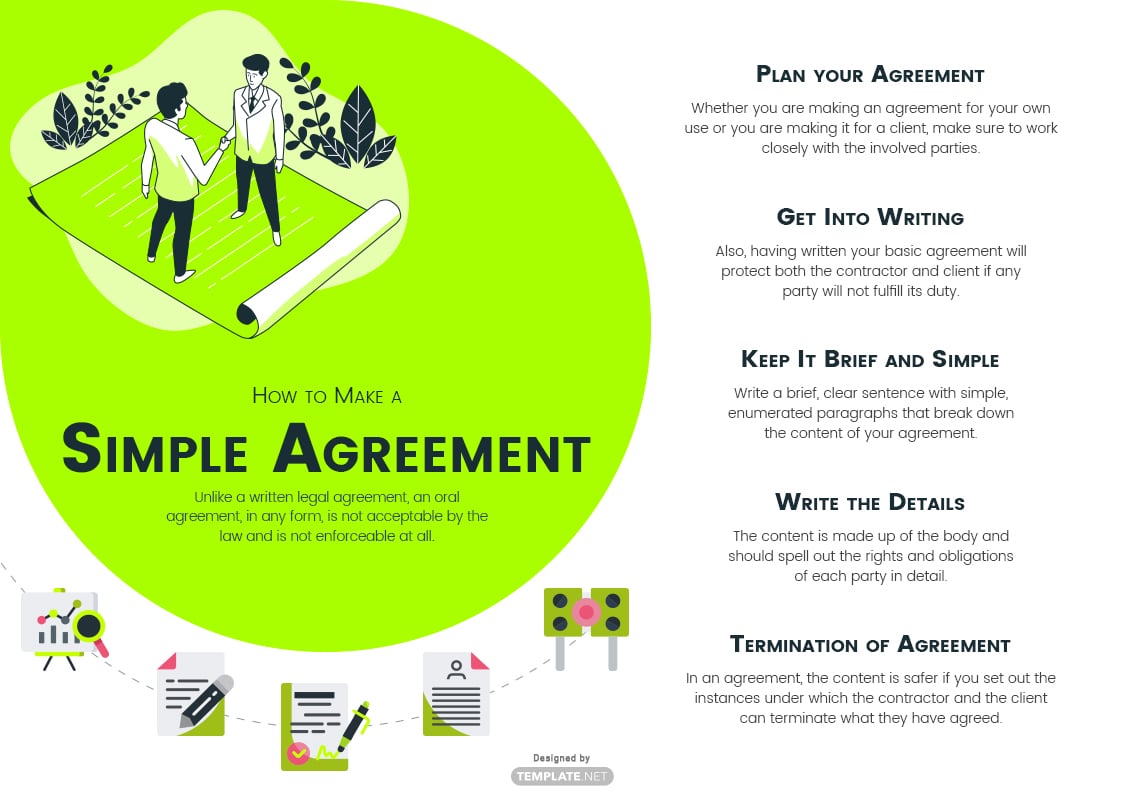 Unlike a written legal agreement, an oral agreement, in any form, is not acceptable by the law and is not enforceable at all. Most agreements must be written down and signed by the contractor and the client. Here's a guide on how to make a simple agreement. Follow the given steps and have a smooth agreement ready in minutes.

Whether you are making an agreement for your use or you are making it for clients, make sure to work closely with the involved parties. Make time to discuss with them all the terms and conditions they want to set into the agreement. Let them understand that anything that will be written in the agreement will be their duty to comply. Being able to work closely with the governing parties will also help you craft the agreement outline easily because you would know what the parties want.

3. Keep It Brief and Simple

Once you are all armed with what you need, you can start writing your contract agreement. Write a brief, clear sentence with simple, enumerated paragraphs that break down the content of your agreement. With this, the readers will pay attention to each paragraph and will understand what's written in the agreement. Don't make confusing terms and statements, use simple contexts. Keep it short, but comprehensible that delivers the right thought.

The content is made up of the body and should spell out the rights and obligations of each party in detail. If you forget to include something, you can always create a short written amendment in the sample agreement.

In an agreement, the content is safer if you set out the instances under which the contractor and the client can terminate what they have agreed. See to it that it's a right for each party to terminate the agreement without being illegal when someone violates the agreement.