Ganesh Chaturthi is considered one of the most important festivals in Hindu culture. It has a huge religious significance and a long history worth exploring, especially around this time of the year when it’s fast approaching. 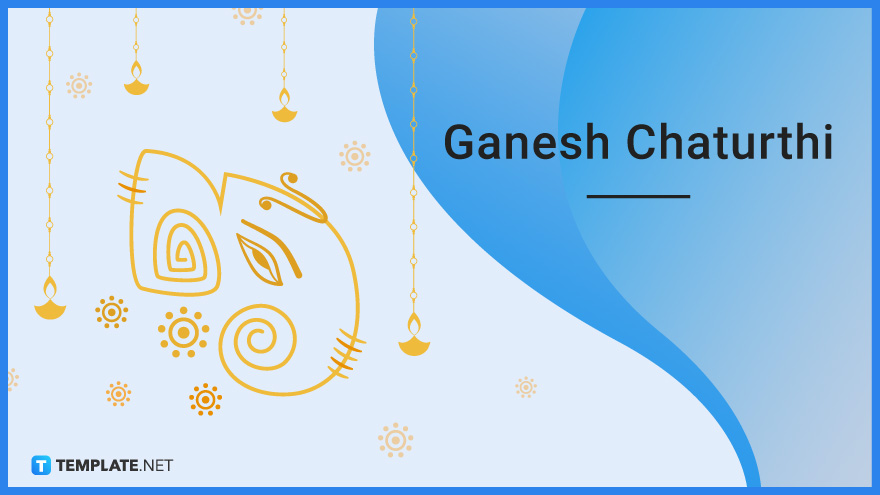 Ganesh Chaturthi is a Hindu festival that lasts for 10 days and marks the birth of Ganesha, the elephant-headed deity who is the god of wisdom and prosperity.

When Is Ganesh Chaturthi?

The starting date of Ganesh Chaturthi changes every year in the Gregorian calendar because it’s observed following the Hindu calendar. It’s celebrated in the sixth month of the Hindu calendar which is called Bhadrapada and coincides with the new moon between August and September.

Celebrate the Birth of Lord Ganesh

Ganesh Chaturthi marks the birth of Lord Ganesh, son of Lord Shiva and the Goddess Parvati. Hindu people celebrate his birth wholeheartedly as he is the god of good fortune, prosperity, and wisdom. Lord Ganesh’s birth is considered by the Hindus as a great divine blessing that grants them an auspicious life.

Throughout the 10-day festivities of Ganesh Chaturthi, Hindu people conduct activities in honor of Lord Ganesh. For one, they sing, dance, and play drums on the last day of the festival as they carry the idols of Lord Ganesh to rivers in a massive procession. Their homes are also decorated with Ganesha idols placed on elevated platforms and they perform certain rituals paying tribute to Ganesh.

Spend the Holiday with Family

For Hindu families, Ganesh Chaturthi is a great day to spend time together. They pray, visit temples, and do other activities in honor of Lord Ganesh’s greatness. Most parents of Hindu families during the celebrations are free from work and so are the kids as well from school. Ganesh Chaturthi is indeed an auspicious and joyful day for the majority of people in India and Hindu nations.

Ganesh Chaturthi is a 10-day festival honoring Lord Ganesh and starts with people placing idols of Ganesha on raised platforms as home decorations. Rituals such as the pranapratishta and the shhdashopachara take place as a way of paying tribute to Lord Ganesh. After Ganesh Chaturthi, Ganesha idols are brought to nearby rivers in a large procession and are accompanied by people playing drums, dancing, and singing.

How to Create a Ganesh Chaturthi Social Media Post

If you’re a devotee of Lord Ganesh, then it’s clear that you’re excited for this year’s Ganesh Chaturthi. So let your social media friends and followers know about it. Make sure to create a beautiful Ganesh Chaturthi social media post by following our simple guide below.

If you’re on Facebook, we invite you to use our Ganesh Chaturthi Facebook post templates. Their creative designs perfectly sport the Ganesh Chaturthi theme and they’ll certainly look good on your Facebook timeline. Click the template that you want and start editing it in our Editor tool which has everything you need to personalize its visual elements.

Our website Editor tool has several Ganesh clipart that you can add to the post template. To find them, go to the Graphics panel and type “Ganesh” in the search box. Click and drag the Ganesh clipart you want to the template. Place it in a good spot and resize it if needed.

If you want, you can change the background color of your Ganesh Chaturthi Facebook template. Go to the Background settings, select See All in the Colors section, and click a color under Default Colors. We recommend using red or yellow since those colors are in theme with the Ganesh Chaturthi festival.

We have Instagrammable Ganesh Chaturthi Instagram templates. You can start customizing them immediately in our Editor tool. Simply select the template of your choice to get started. The Editor tool is very user-friendly and offers plentiful choices for you to tweak the visual details of this Instagram template.

2. Type in your Ganesh Chaturthi message.

When you’re in the Editor tool, start by typing in your Ganesh Chaturthi message or wishes. A short one will do as long as it’s meaningful and in good spirits. To write your custom message, open the Fill panel and customize the Fill Text boxes content.

Free Ganesh stickers are available in our Editor tool. Head to the Graphics panel and type “Ganesh” in the search box. Just click and drag your selected sticker to the template.

When you’re finished beautifying your post draft, make sure to save it. Click the three-dotted icon in the upper right corner of the Editor page and select Save. Get ready to upload your Ganes Chaturthi post draft to Instagram once the festival starts.

Use our Ganesh Chaturthi Whatsapp template to get started. Select the “Edit This Template FREE” button to begin customizing it in our Editor tool. Our Editor tool provides plenty of customization options that allow you to personalize the details of this template.

3. Change the color of the background.

If you don’t like the current background color, change it. To do that, open the Background settings panel, click See All under Colors, and select a color icon under Default Colors as shown in the image above. Just click a color and it’ll immediately be set as the background color. We recommend red or yellow.

If you want to showcase your personal brand in your post, consider uploading your logo. Go to the Logo panel and click Upload Your File to upload an image file of your logo. Once uploaded, simply attach it to the post template.

When you’re done, click the three-dotted icon in the upper right and select Save. Hold on to your Ganesh Chaturthi Whatsapp post draft for now. And when the festival starts, upload it to Whatsapp.

Ganesh Chaturthi is a Hindu festival honoring and commemorating the birth of Lord Ganesh or Ganesha.

Dussehra is also a Hindu festival observed in some parts of India and Nepal which celebrates Rama’s triumph against King Ravanna, the 10-headed demon king who kidnapped Sita who is Rama’s wife.

Here are some good activities you can do in celebration of Ganesh Chaturthi:

Displayed below are high-quality Ganesh Chaturthi templates and examples that you can check out and download at any time. 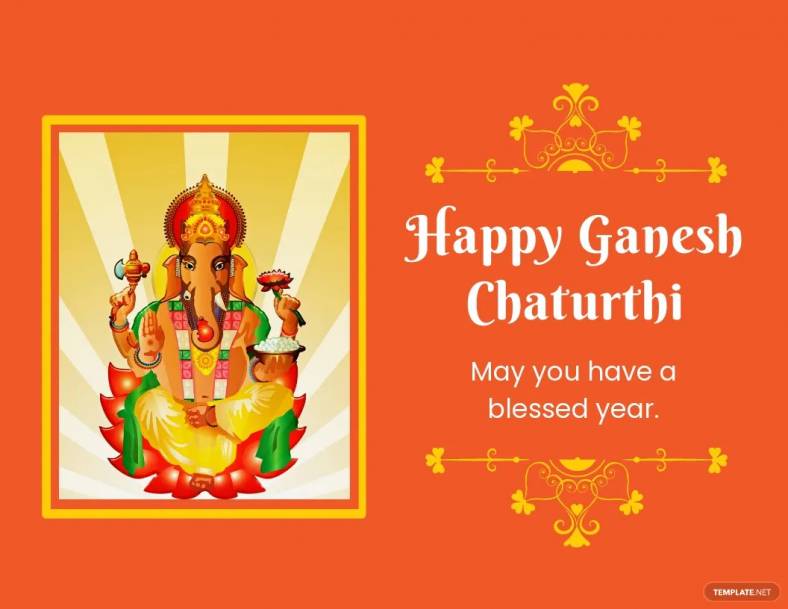 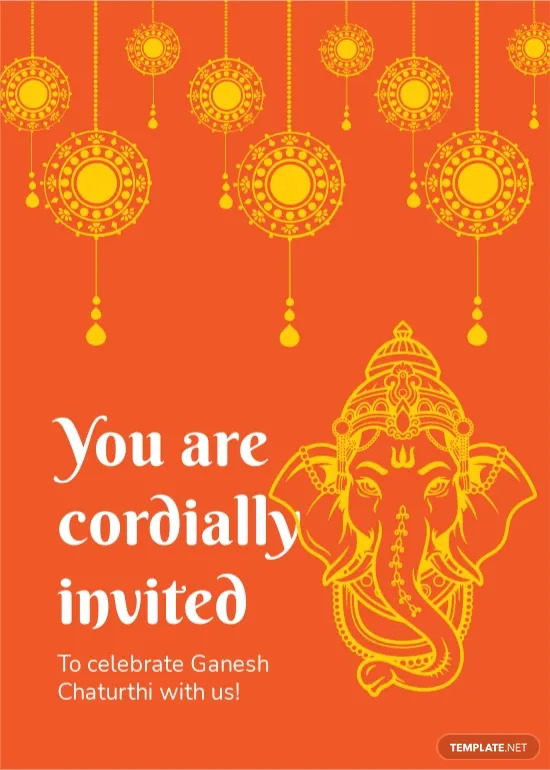 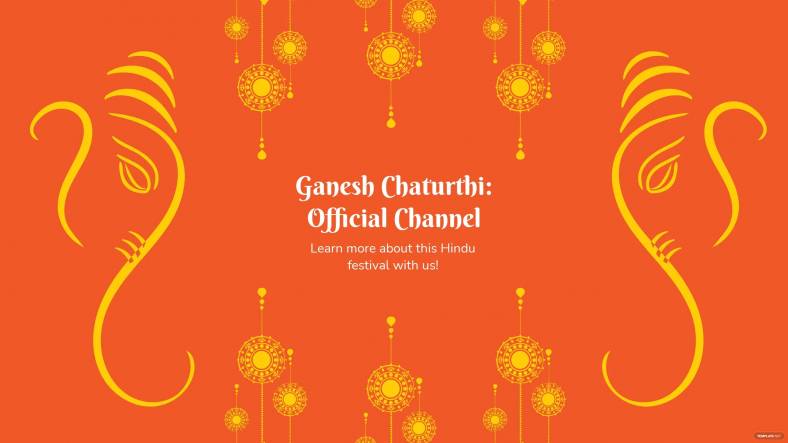 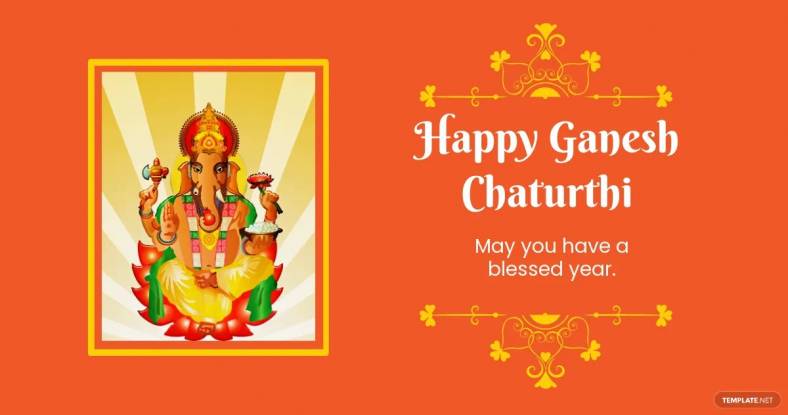 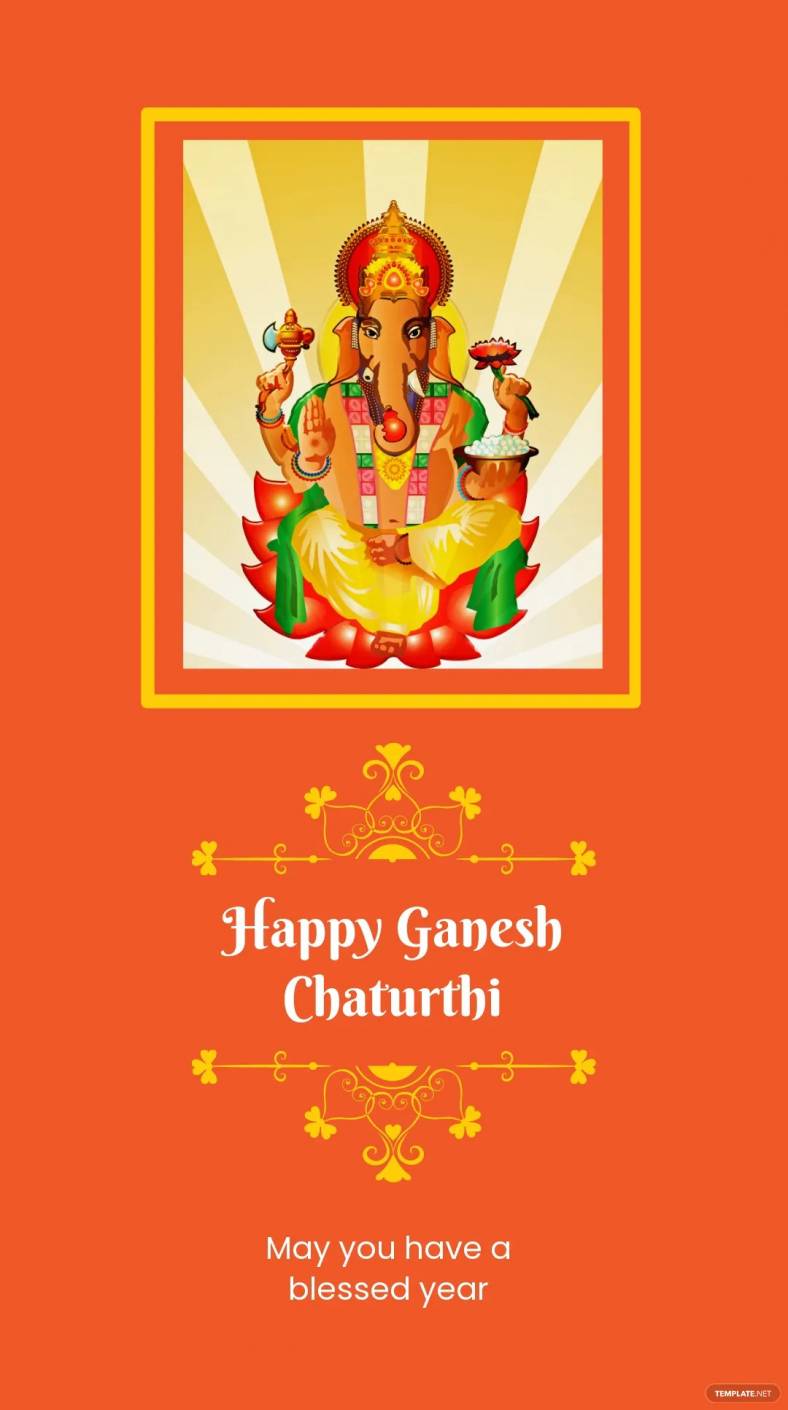 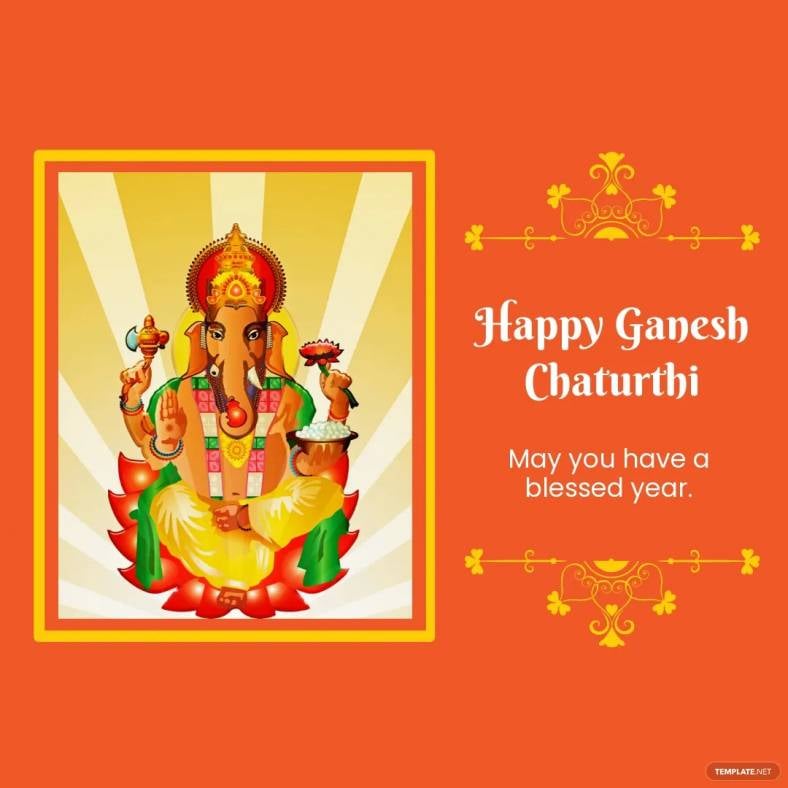 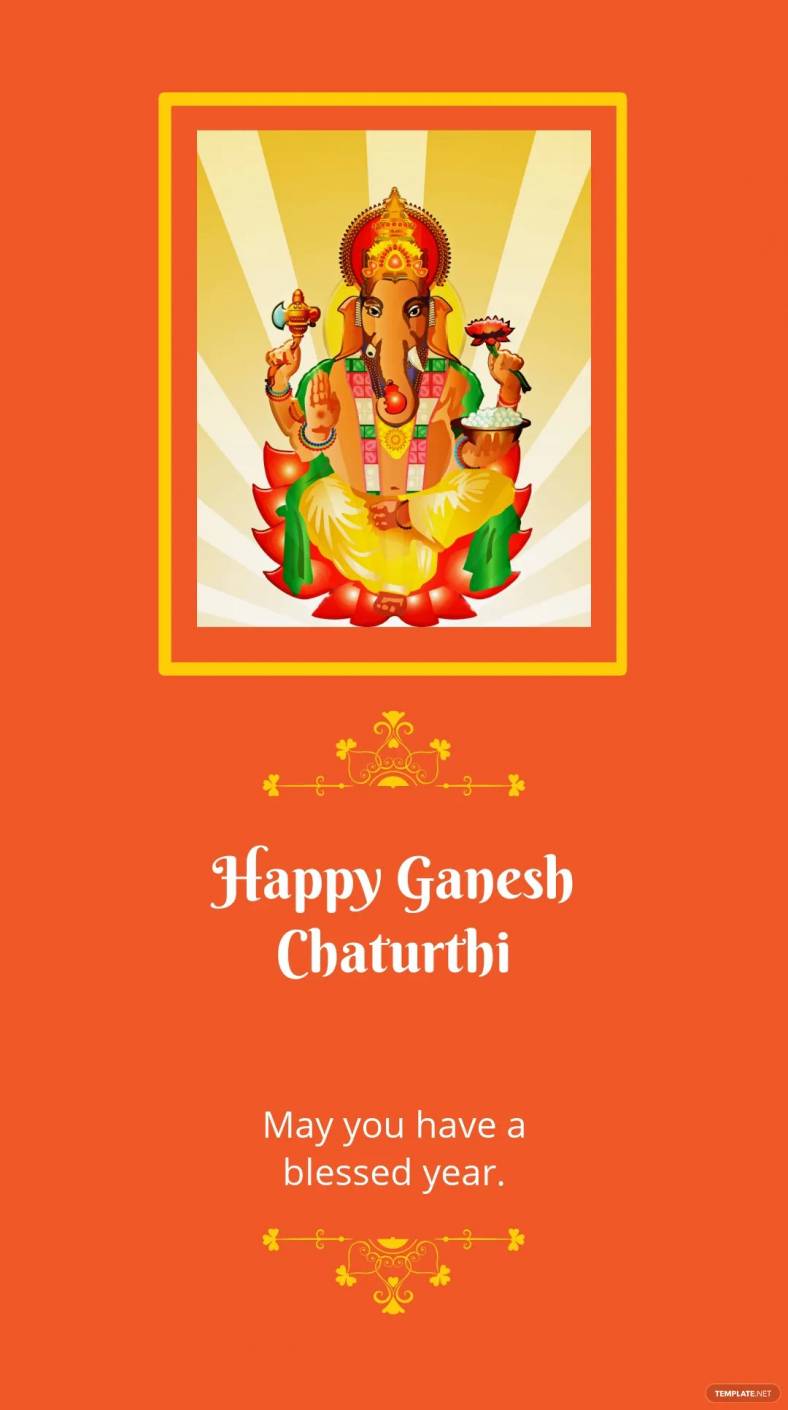 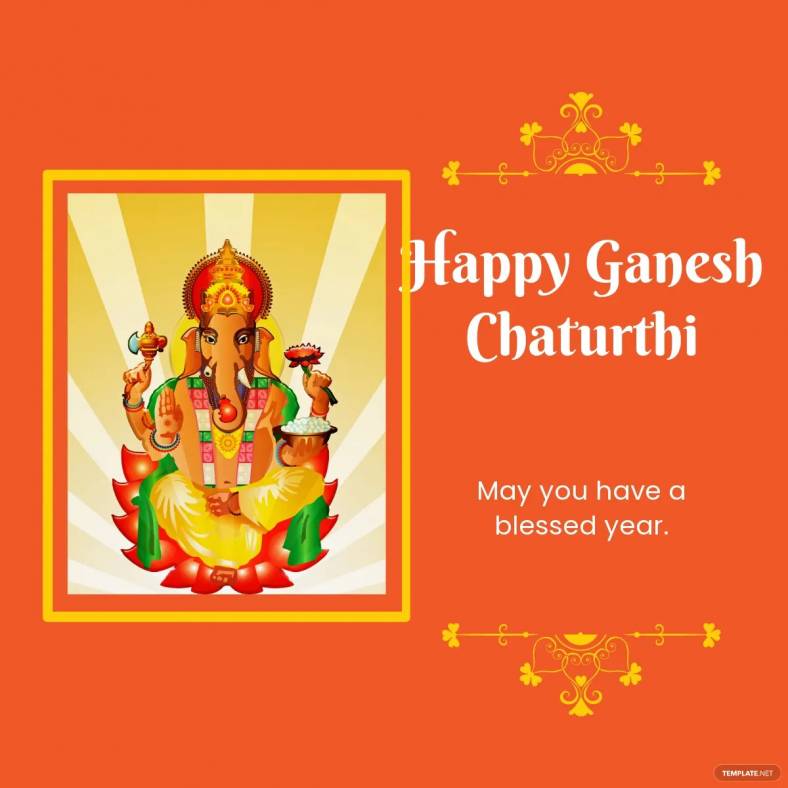 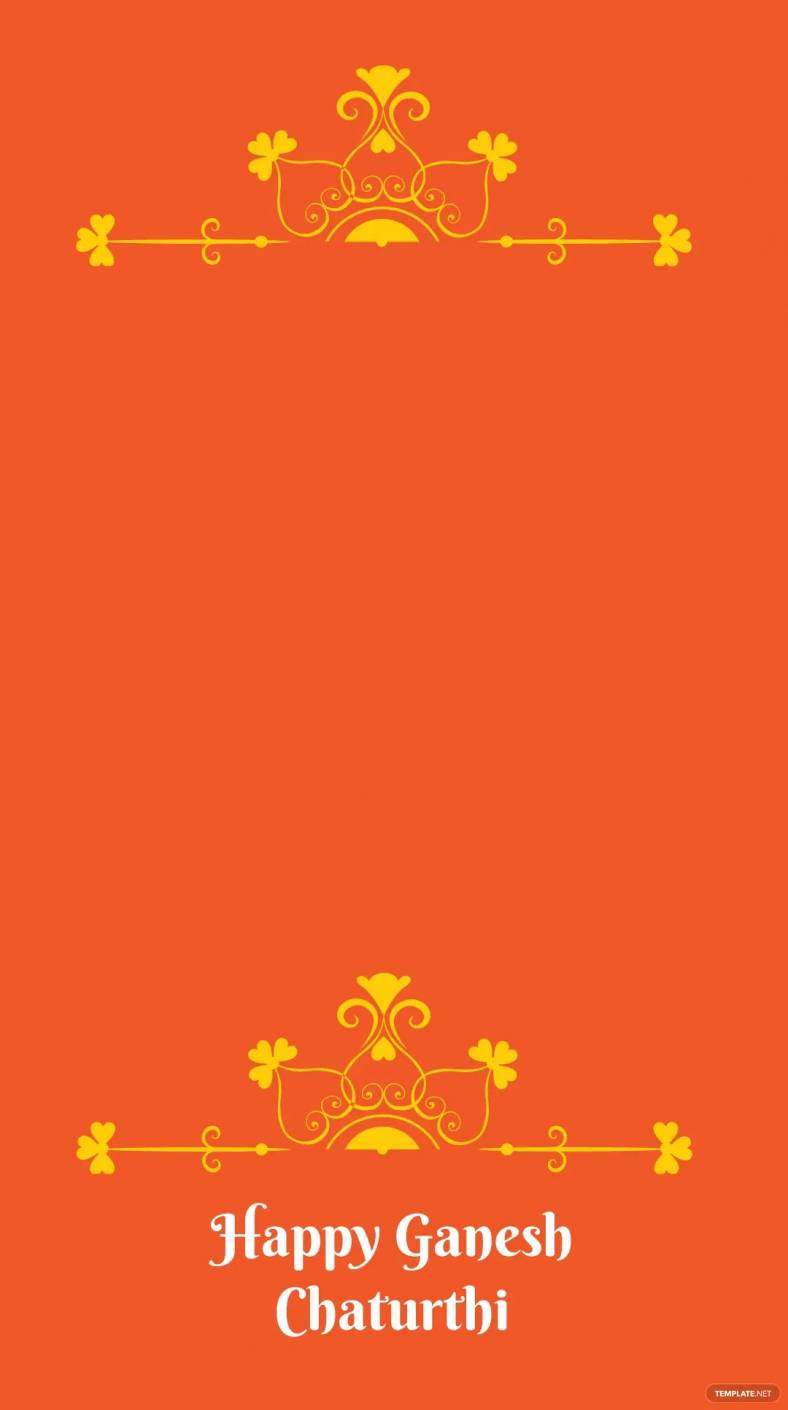 Why is Ganesh Chaturthi celebrated?

Ganesh Chaturthi is mainly celebrated to celebrate the birth of Lord Ganesh.

When should the Ganesh idol be dissolved and why?

The Ganesh idols should be dissolved when the puja is concluded to signify Ganesha’s birth cycle.

Why is Ganesh Chaturthi so special?

The main reason why it’s so special is that it celebrates the birth of Ganesha and the celebration lasts for 10 days.

What does Ganesh Chaturthi teach us?

Ganesh Chaturthi mainly teaches us the importance of valuing and respecting our elders. Such actions are among the things that Lord Ganesh preaches.

What should we avoid on Ganesh Chaturthi?

You shouldn’t sight the moon on Ganesh Chaturthi.

Why should we not see the moon on Ganesh Chaturthi?

You shouldn’t see the moon on Ganesh Chaturthi because such an action is believed to be a cause for being dishonored or accused of thievery by society.

Who first started the Ganpati festival?

The one who started the Ganpati festival is Chatrapati Shivaji Maharaj.

Who served the first modak to Lord Ganesha?

When should we break Ganesh Chaturthi fast?

We break Ganesh Chaturthi fast after the moonrise.

Which flower is used on Ganesh Chaturthi?

The Red Hibiscus flower is used on Ganesh Chaturthi.

What is the story of celebrating Ganesh Chaturthi?

Ganesh Chaturthi has been celebrated since King Shivaji’s time; it was at first a private celebration but was changed to a public celebration by Lokmanya Tilak.

What are the traditions of Ganesh Chaturthi?

Among the main traditions of Ganesh Chaturthi is displaying idols of Ganesha at home and joining musical processions.

What is the significance of Angarika on Ganesh Chaturthi?

Angarika means deliverance in trying times and is a type of fasting believed to alleviate an individual’s struggles.