Ugadi is a Hindu festival that commemorates the beginning of the new year in the Hindu calendar. Discover more about how this holiday is observed through traditions, festivals, and other rituals.

This is observed mostly in the states of Karnataka, Andhra Pradesh, and Telangana, but is still observed outside those states as well.

Ugadi is an annual festival that is celebrated typically in the month of April in terms of the Gregorian calendar. Ugadi’s exact date varies with the date falling on April 2 in 2022, and March 22nd in 2023.

Ugadi is a very old festival, almost as old as the Hindu religion. According to Hindu mythology, this festival commemorates the event where Lord Brahma creates the universe hence the beginning of time and the start of the Hindu calendar.

The festival lasts for nine days and commemorates the creation of the universe by the Hindu god Lord Brahma and it is celebrated through the observance of traditional rituals, food, and pilgrimages.

Creation of the Universe

Many Hindus celebrate this day to commemorate the beginning of the universe when the Hindu god Lord Brahma created the cosmos. As this is the beginning of existence, it makes sense why this is regarded as a special day for those in the Hindu community.

Ugadi is essentially considered a new year by those who observe this holiday. And like New Year’s Day in the Gregorian calendar, this holiday is considered a day where new beginnings start and where things that belong to the previous year get left behind.

Like most Hindu festivals Ugadi is significant in that it allows devotees to celebrate and renew their spirituality with their faith. Ugadi is the day that marks the first day of the universe when Lord Brahma created everything, so people welcome every new year with joy and hope for the blessings of the gods.

Ugadi is a festival that is celebrated for nine days. On the first day, it begins with everyone taking a ritualistic shower where the body is then rubbed with perfumed oil and followed by prayer after that. The days are celebrated with a great festival where feasts are taken with the extended family members. The houses are also cleaned thoroughly to represent the renewal along with the start of the new year. Colorful patterns called Muggulu are drawn on the floor while mango leaf decorations called the torana are drawn on the door. New clothes are bought and gifted to others as well during this festival.

How to Create a Ugadi

Sharing Social Media posts during special events has become a popular thing to do. Social Media is also a great tool for sharing information about certain cultural celebrations. To get started, these are ways you can create a Ugadi Social Media post.

Pick any of our Ugadi templates for Facebook. Select the template that fits your needs and click on the image to open it on the Editor tool. 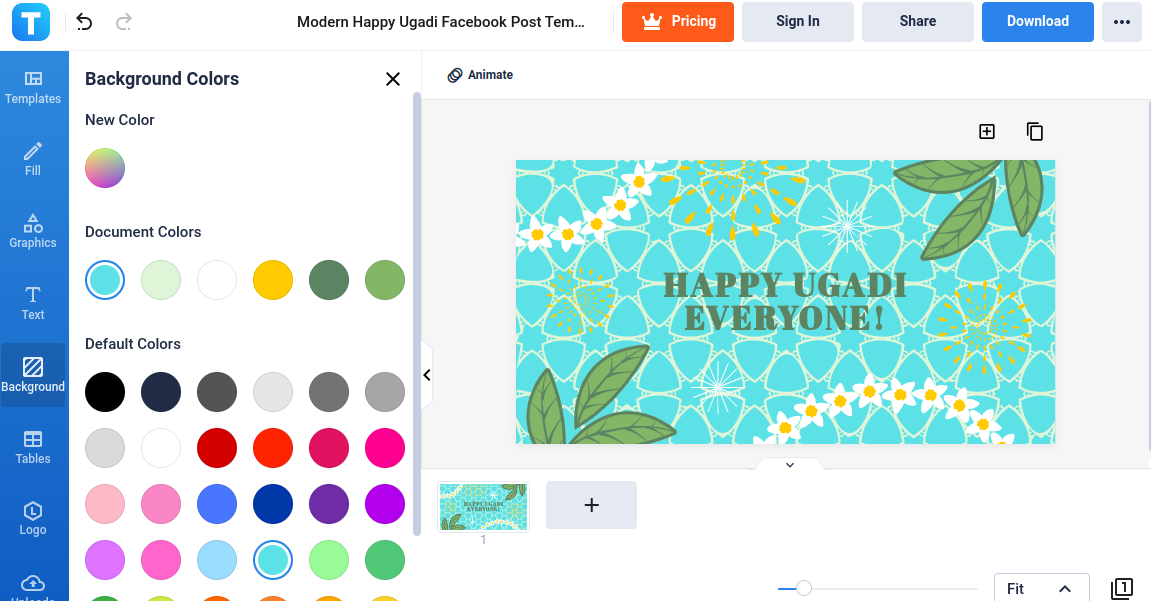 You can start editing with the background color. Go to the Background settings and click the Colors section. There you can choose any color you want, be it blue, white, green, orange, etc.

Proceed to write your National Library Worker’s Day message on the post by customizing the content in the Fill Text boxes. You can do so by clicking the Fill panel.

If you want to place images relating to the Ugadi festival, then you can upload them. Choose the Uploads panel and pick the images. You can place the image file by clicking and dragging it.

Finally, save your Ugadi Facebook post by choosing the three-dotted button, and the Save option. You can upload it once it is Ugadi.

Head to template.net and search for Ugadi templates on the search bar. In there you can find our Ugadi Instagram Post templates. Next, click on the “Edit This Template FREE” button or on the image itself to open it on the Editor tool.

To add custom text to your Ugadi post, you can do so by clicking the Fill panel and changing the text on the boxes.

If you want more visuals on your Ugadi Instagram post, click on the Graphics panel, then search for Ugadi-related HD clipart and animated designs for your template.

You may add photos through the Graphic panel and add great visuals to your Ugadi post.

1. Choose a Ugadi template for LinkedIn.

Adding a text lets audiences know about the post’s content. Click on the Fill button on the toolbar, and highlight the text to add the word Ugadi.

Enhance your Ugadi LinkedIn post by adding graphic design elements like icons and symbols into the thumbnail associated with the event. Head to the Graphics button, and choose graphics from the categories.

Users can add photos on the thumbnail if they want. Select the photo, and click on the Replace button on the top portion of the work area. A new window appears on the left panel, and you can choose from the different stock photos shown.

After finalizing it all, users can now save the new design. Select the ellipsis icon in the upper right corner of the Editor tool, and choose Save. You are now all set to upload your image come to Ugadi.

Ugadi is an annual nine-day festival that commemorates the creation of the universe by Lord Brahma.

Navaratri is a biannual festival that is observed in honor of the goddess Mahadevi.

Here are some interesting facts you should know about Ugadi.

Another name for Ugadi is Samvatsarādi which literally means Beginning of the Year.

On Ugadi, various rituals and prayers are observed during this new year and are referred to as puja which means worship ritual.

In Ugadi, the day is also celebrated by making rangoli which are beautiful designs made with a cute color theme and art crafts.

Ugadi pacchadi is a dish unique to this festival where it has all six flavors in its ingredients/recipes which are sweet, sour, spicy, bitter, salty, and astringent.

With the difference and diversity within India, the way Ugadi is observed varies from one culture and region to the next.

Aside from making the Social Media posts mentioned earlier, there are other templates related to Ugadi that you can use to celebrate this festival. Whether you want to make some vectors, quotes, greeting cards, and posters, we’ve got your back. Some of the best examples are the following: 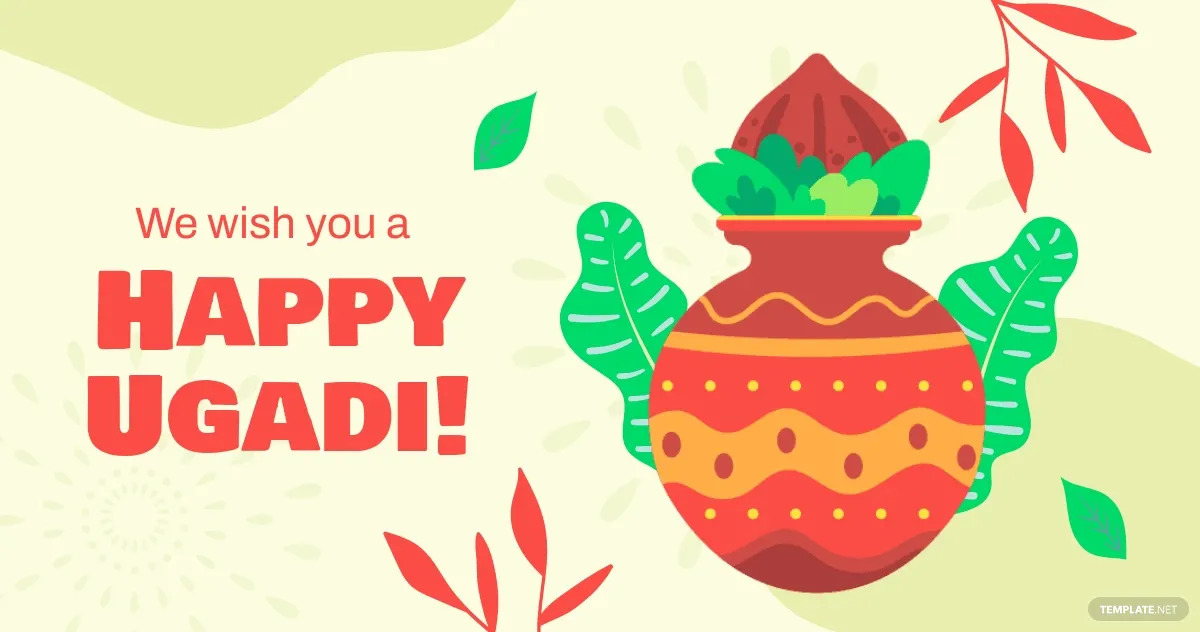 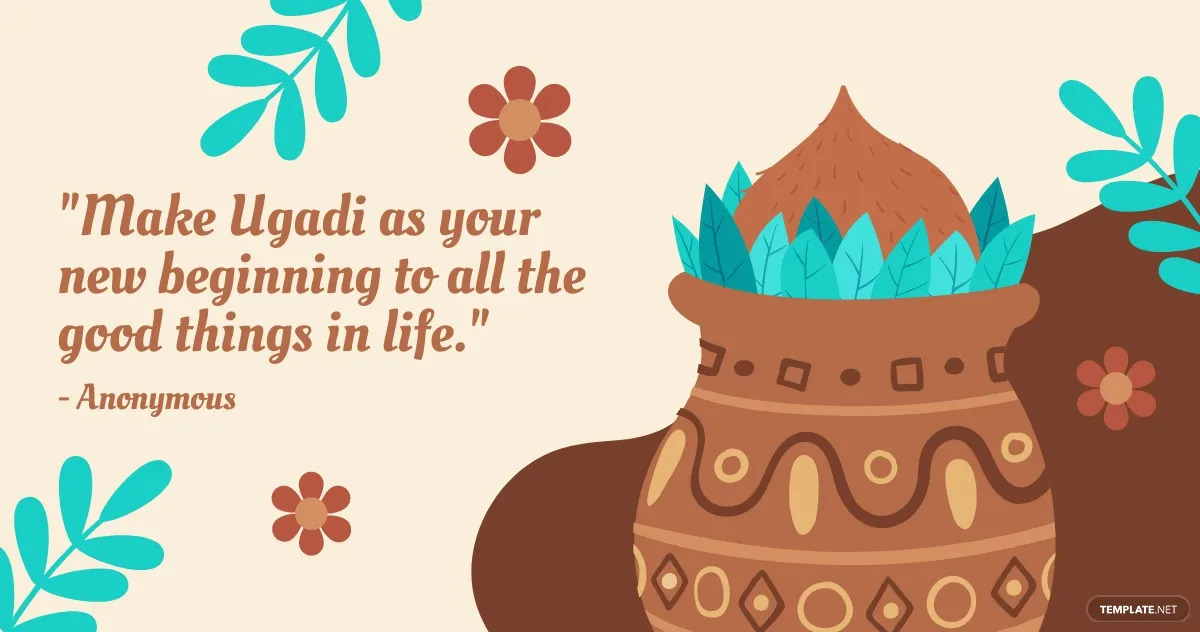 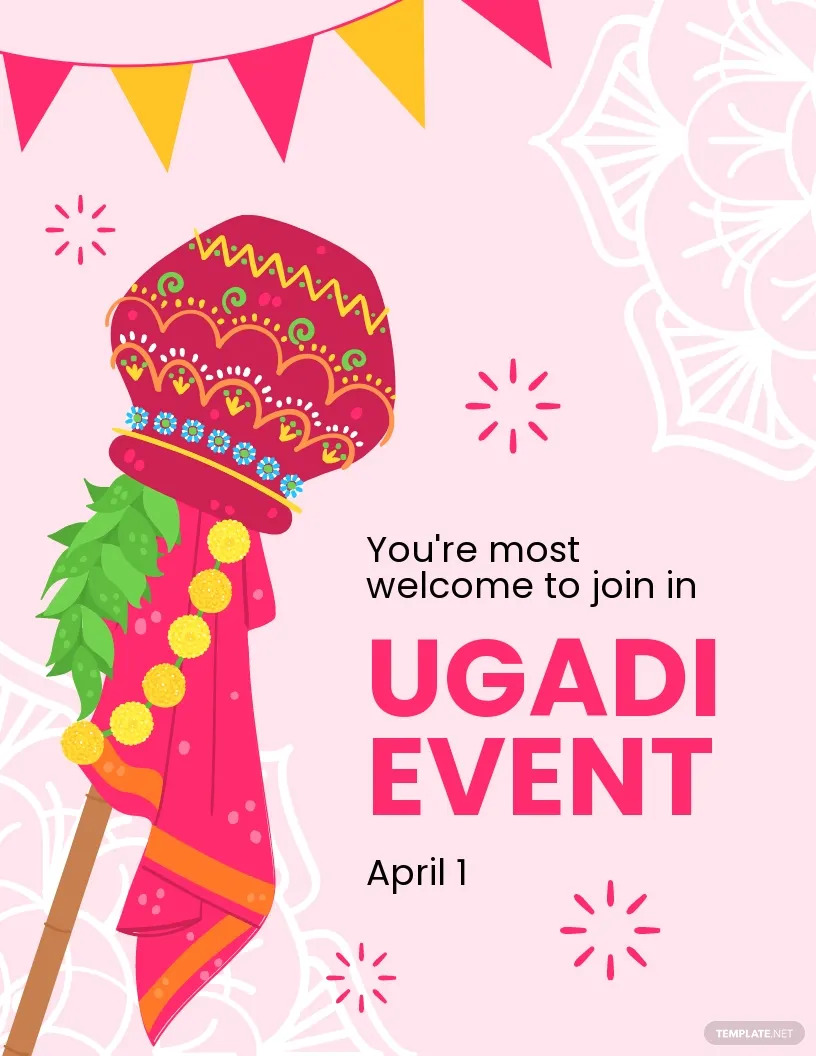 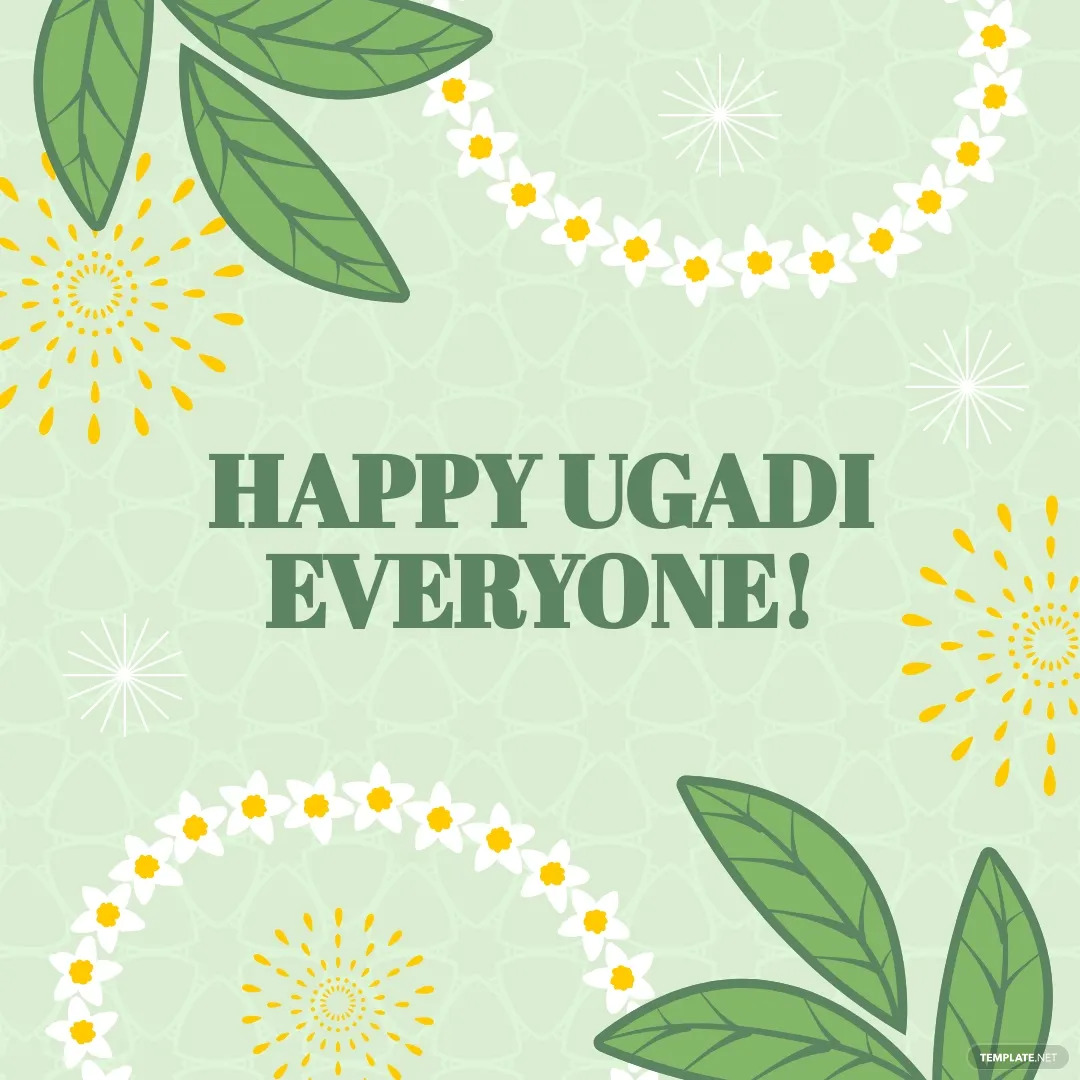 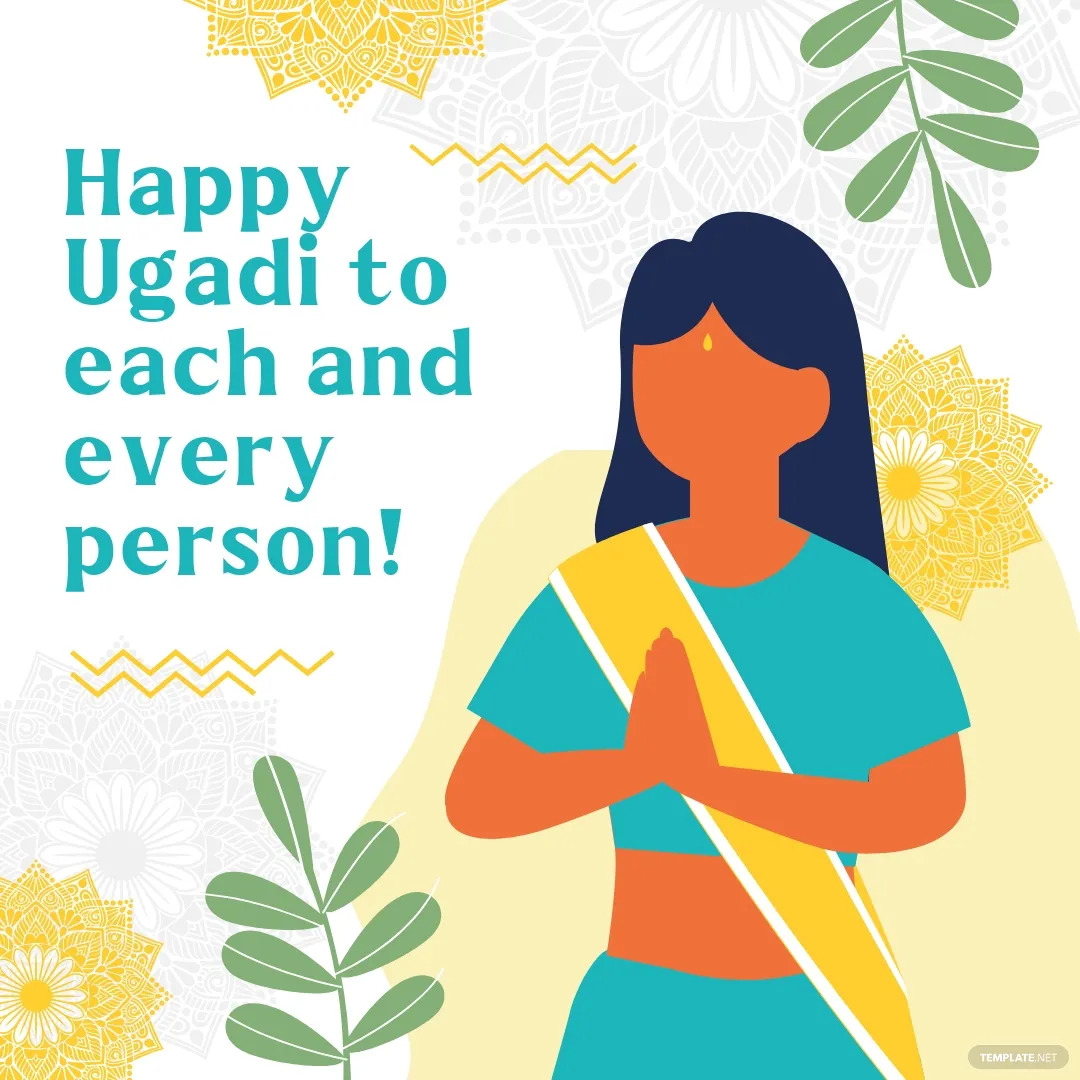 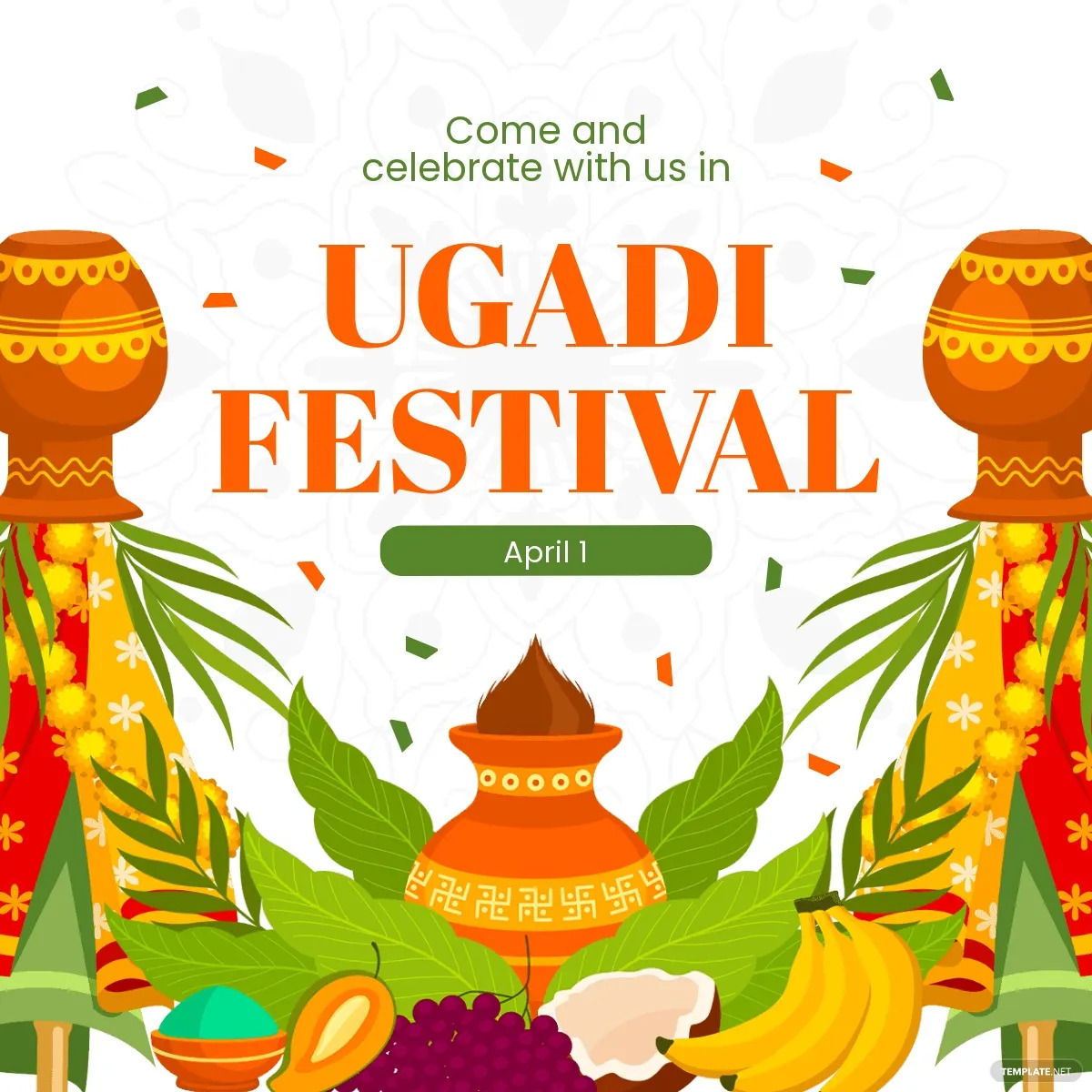 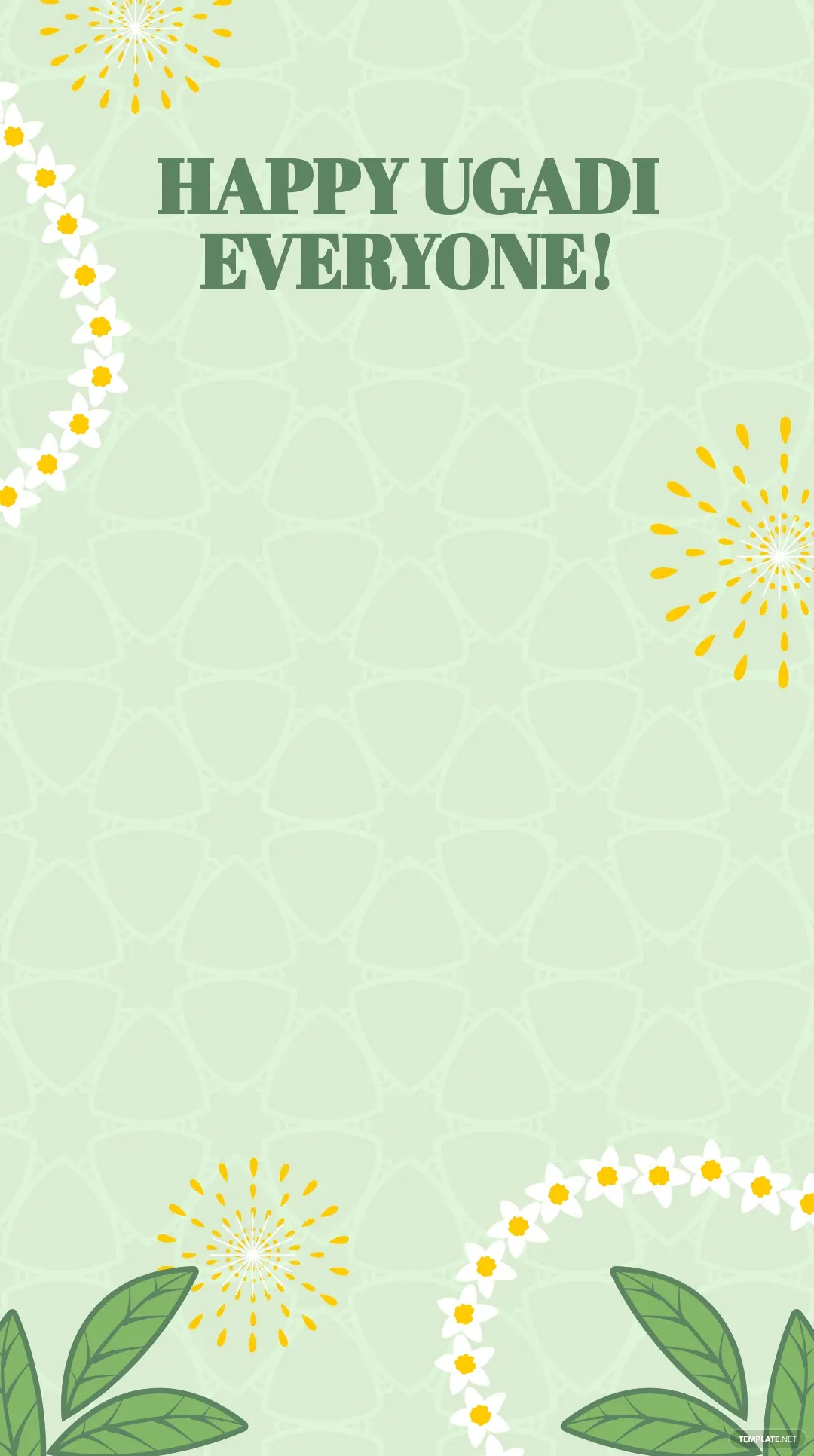 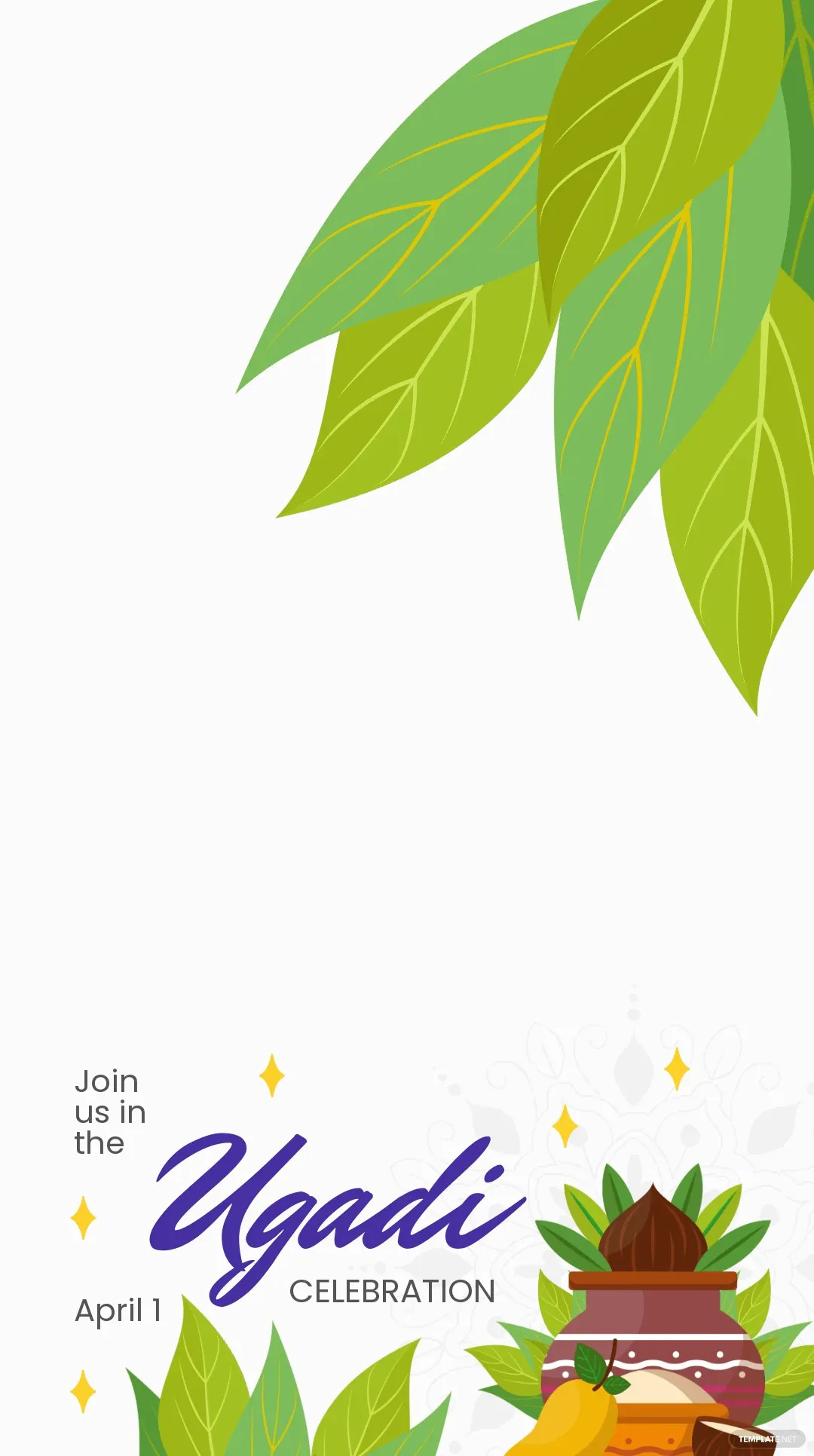 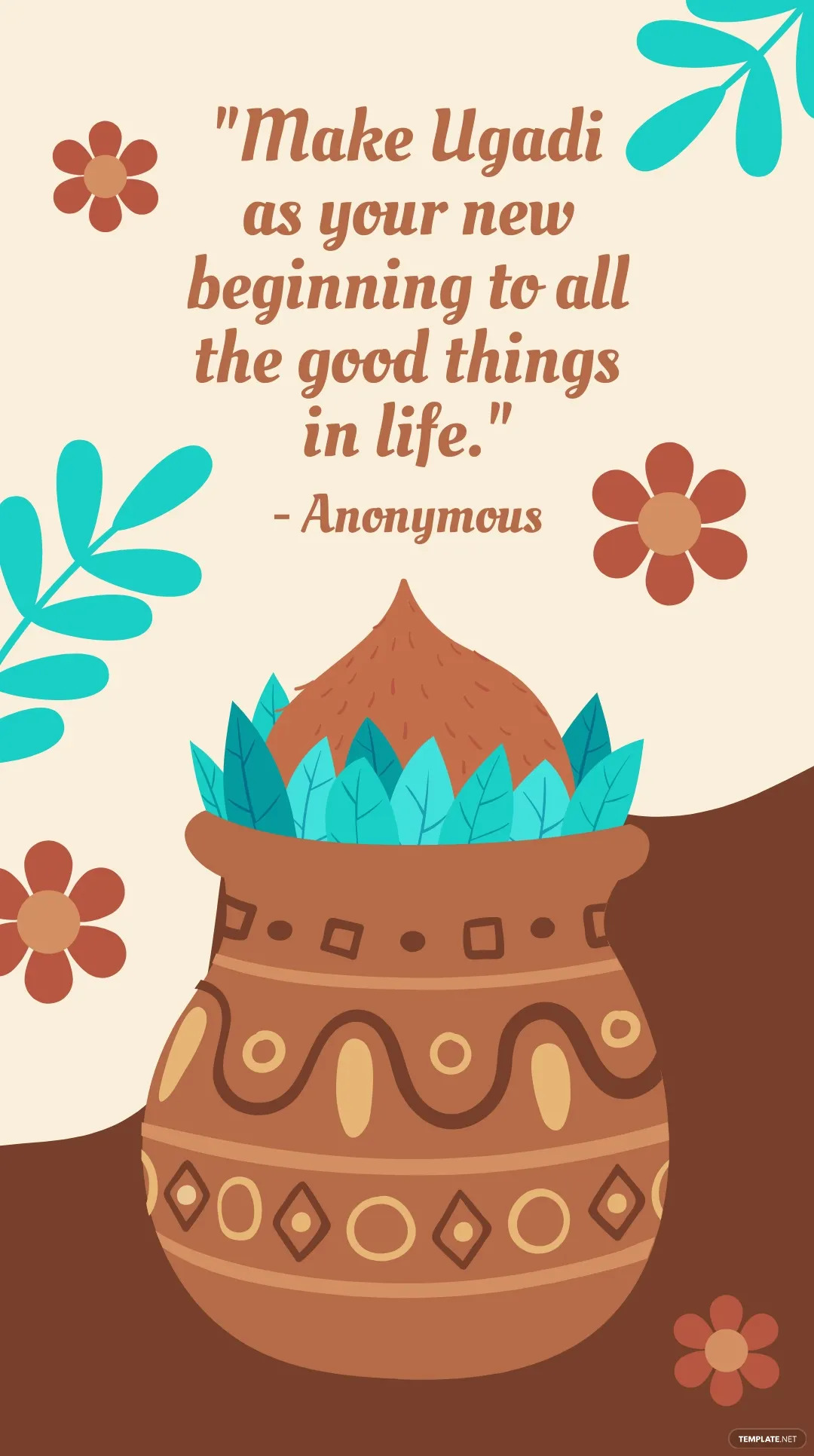 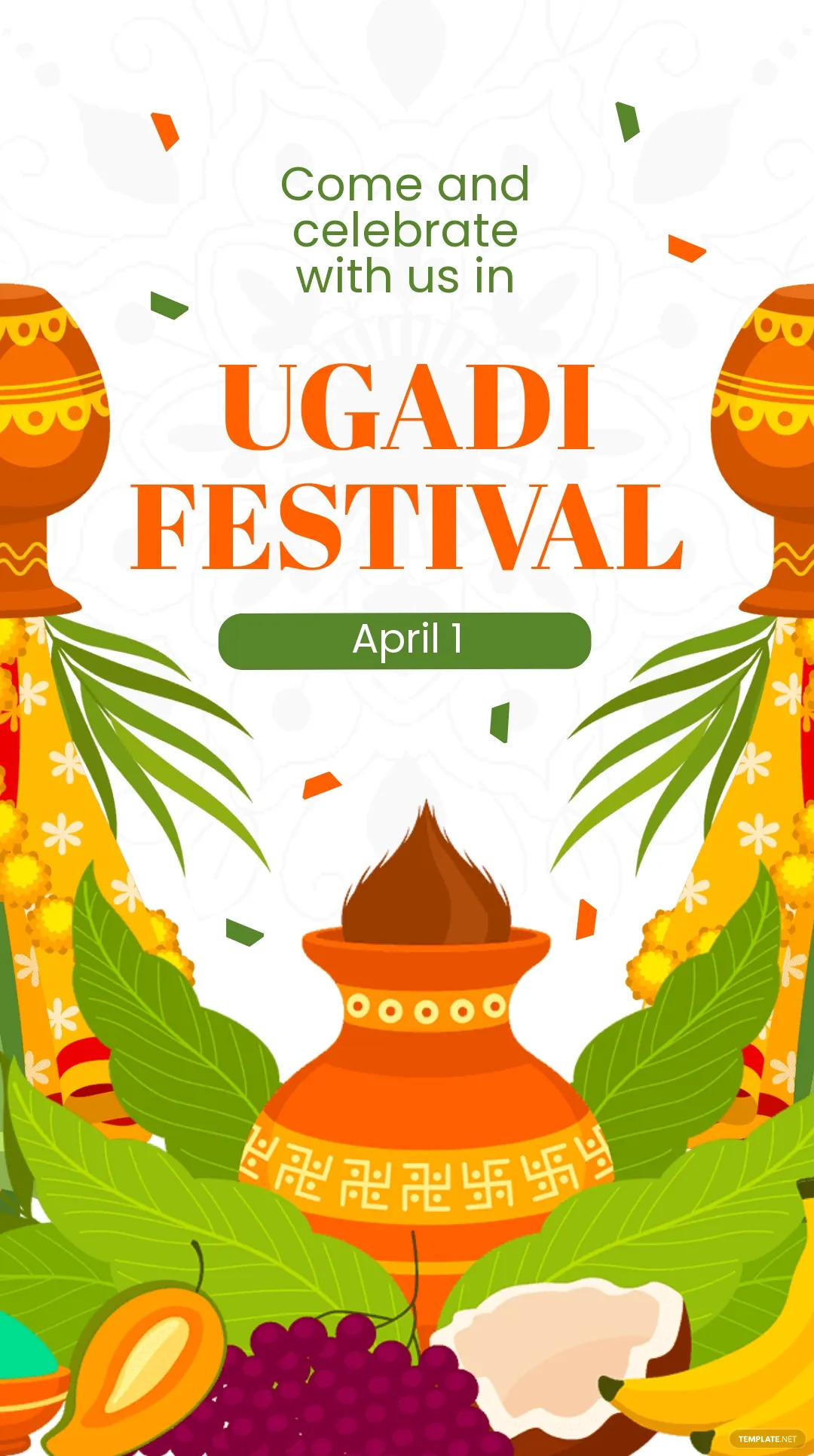 What is Ugadi and why is it celebrated?

Ugadi is the first day of the Hindu lunisolar calendar and is celebrated for Lord Brahma’s creation of the universe.

Which God is worshiped on Ugadi?

The Hindu creator god Lord Brahma is worshipped during Ugadi.

Why Ugadi is celebrated in April?

Ugadi is celebrated around April because that is the month when the festival falls based on the Gregorian calendar.

What is the story of Ugadi?

The story of Ugadi details how Lord Brahma created the universe in a series of days.

What does Ugadi represent?

Ugadi represents the beginning of a new year and new beginnings in life.

What are the things to do in Ugadi?

Some things to do in Ugadi include celebrating with family and visiting the temple to offer prayers for good fortune.

What is the importance of Ugadi?

Similar to New Year’s day in the Gregorian calendar, the importance of Ugadi is that with the new year, everyone should start with a renewed way of living life.

Why should we see the moon on Ugadi?

On Ugadi, it is believed that the sides of the moon are connected to the harvest of the season which is why people watch the moon as a popular practice.

What does Ugadi stand for?

Why do Telugu people celebrate Ugadi?

Telugu people celebrate by making a flavorful dish that symbolizes how one must live life to the fullest with all its flavors.

What do you say about Ugadi?

On Ugadi, it is common for people to exchange greetings of a happy Ugadi along with a wish of good fortune and blessings.

What is the message of Ugadi?

The man message of Ugadi is about hope and happiness which come along with the beginning of a new cycle.

What are the traditions of Ugadi?

Traditions of using mango leaves and coconuts are considered auspicious in the Hindu tradition which is why they are used as decorations during Ugadi.

Why is Ugadi called New Year?

Ugadi is called New Year because the word Ugadi in Sanskrit is derived from the words Yuga (age) and Adi (beginning) which translates to the beginning of a new age.