A proposal takes a while to make, and sometimes it is not approved. While some have written it many times, others may still find the writing process a tricky part. If you tried working on a research project proposal during your student days, building a project proposal for an electrical, civil, mechanical, technical, computer, software, and business engineering project can be a challenge to your career.

Use our engineering project proposal templates to let you write an introduction, executive summary, description, and design outline with ease. Each proposal template contains a brief free format for a multi or one page engineering plan. With our samples, you can have time to write a proposal letter, presentation, and other economic and business effects your project can do. 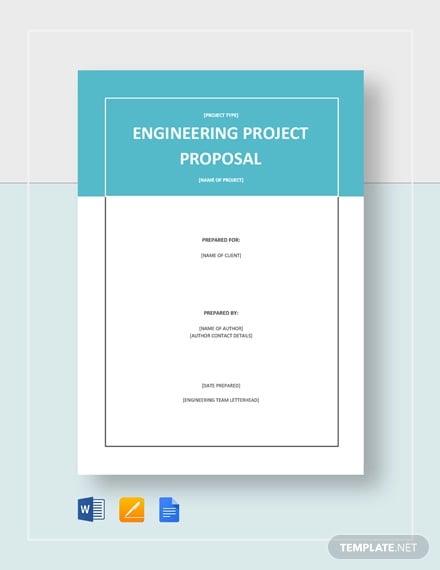 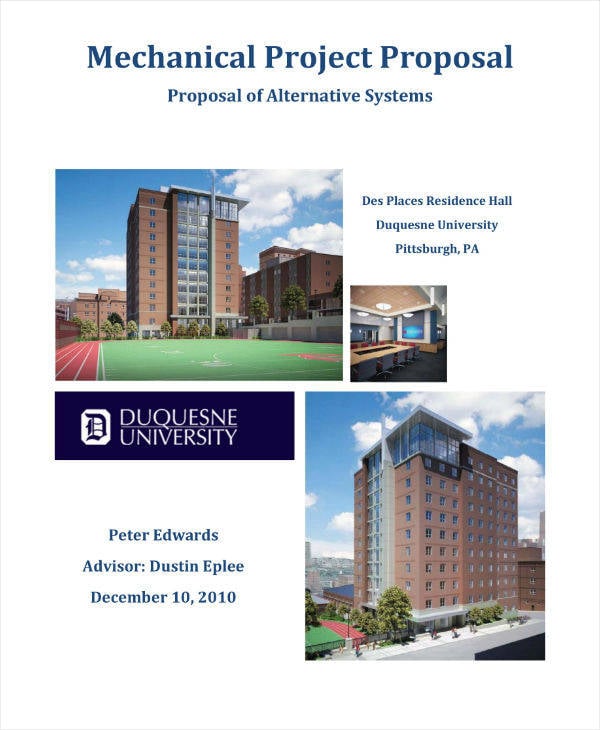 As such, it aims to give a comprehensible layout of what resources are needed for executing a project and how these resources will be allocated. It differs from a project plan in that the proposal aims to ask for funds to carry out the project while the plan details how the project will be carried out. Although they are different, these terms are often used interchangeably and in most cases, combined into a single document. 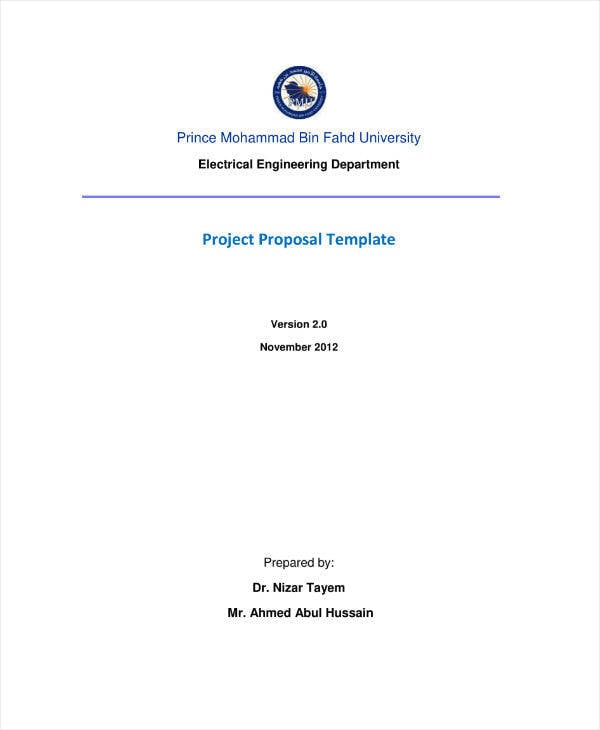 There is no exact style and structure that an engineering project proposal sample has to follow but they all have the same goal. That goal is to convince the reader that the proposal is the best one that suits them and that there is no alternative. It also affirms that the writers of the proposal, the proposers, are most qualified in accomplishing the task at hand. 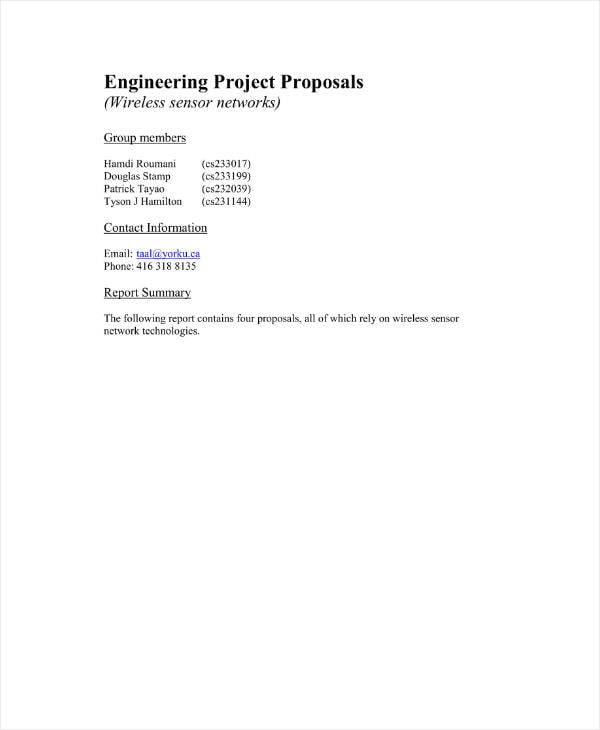 Structure of an Engineering Project Proposal

The executive summary of a project proposal is a brief section that contains at least one or two paragraphs. In these paragraphs, the writer must be able to state the purpose of the proposal, the important parts, the total expense budget, and the qualifications of the team presenting the proposal. Ideally, this section of the proposal should not exceed one page.

It is important to note that one has to have all the basic information of the proposal before writing this section and as such, this should be written last. In the end, the basic things that should be included in the executive summary sample are the purpose (like the statement of the problem), the funding requirements, and the writer’s capacity to follow through with this proposal.

As the executive summary is just a summary of what the project is about in one or two paragraphs, it will not be able to provide enough details to fully introduce the proposal. In writing this section, the writers should define the purpose of this proposal and they should be clear about that purpose. This includes making it clear that a proposal is being made. This is usually done by explaining the situation and emphasizing that there is a problem that needs solving. It is best to consider which facts best support the project and how your project relates to similar projects done before it. You may also see the student project proposal.

This is the meat of the project proposal. With the introduction stating the problem, it is time to follow up that statement with how the problem is going to be addressed. This part of the proposal will detail the approach to the problem and will usually contain at least three elements: the objective, the methodology, and the evaluation. The objective is the intended goal of the proposal and should be tangible, concrete, specific, and achievable in a specific period. You may also see college project proposal templates in PDF.

The methodology is the description of the methods proposed to address the problem. This part should describe the specific activities done to accomplish the problem in a way that allows the reader to visualize its implementation. These methods should be well defended and reasoned out and should match the objectives stated earlier.

The evaluation is the mechanism that allows one to monitor the progress of the project. Including an evaluation of the proposal cements the fact that the writers are serious about achieving their objectives and smart goals. A way to measure the product or an analysis of the process used can be the appropriate way of evaluation. 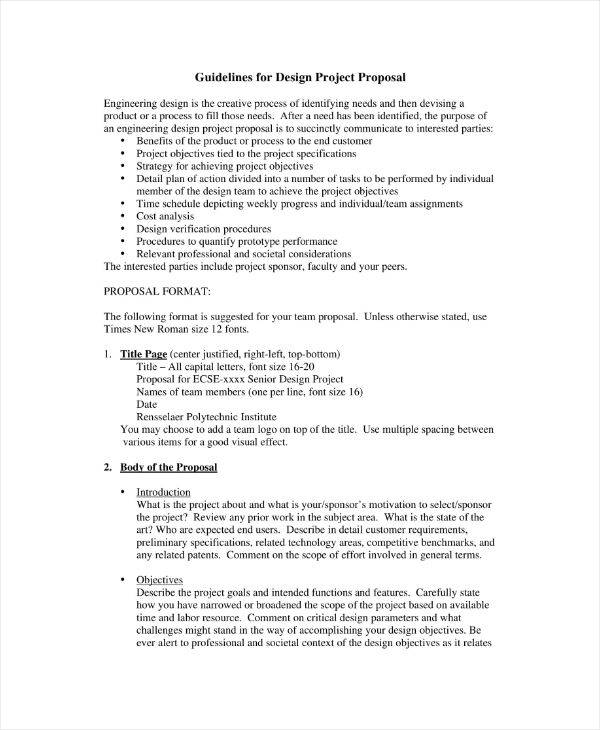 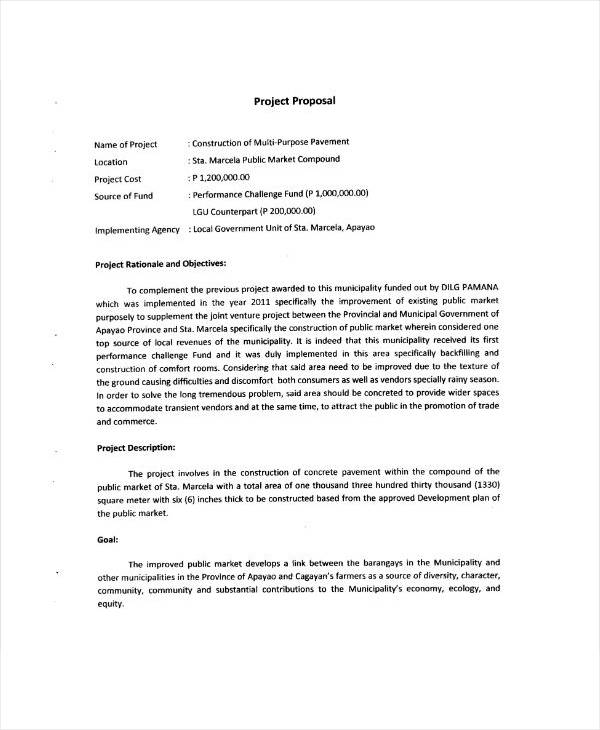 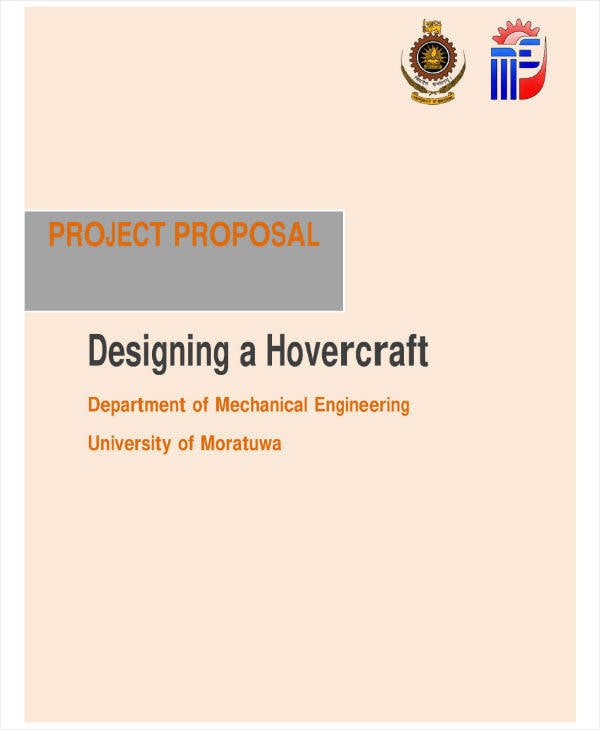 Timelines and milestones are important elements of the implementation process of a project proposal. Both of these can serve as monitors for the project if it is on the right track and if the project can be completed right on schedule. In the proposal period, however, the timeline and milestones can give the audience or the potential investors an idea of when the project is expected to be completed. These things can serve as the project schedule. This section can also specify the reason why such a schedule is chosen to be implemented and it is a good idea to explain so. In some formats, this section is combined with the budget.

The main reason for the proposal is to ask for funding for the completion of the project and thus this section should be clear about how the budget is being laid out. The budget should be allocated together with the resources needed in a clear, concise, and logical manner. Doing so will allow for an easier justification and reasoning of why such an amount is needed and why such resources are allocated the way it is. Just as with the reasoning for the timelines and milestones, specifying the simple budget would be a good idea to include in your proposal. As mentioned above, this section is usually combined with the schedule.

This section is the last key element of the project proposal. This section should present an argument to the audience that there are no better people to carry out the proposal except the writer and the team. Academic qualifications, prior project experience, and the like are valuable here. If working with a team, it is a good idea to write one paragraph for each member of the team that will establish their capabilities that will benefit the project. It is also a good idea to include a one page resume for each team member in the appendix to cement these qualifications. 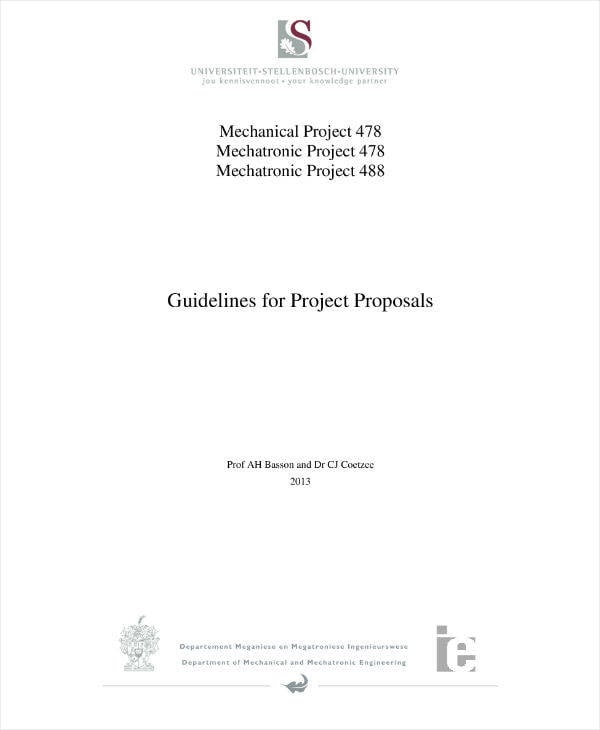 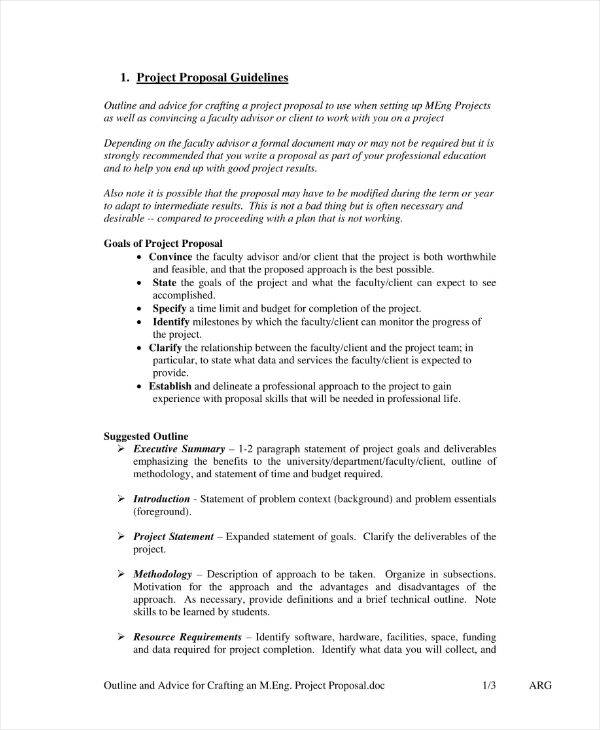 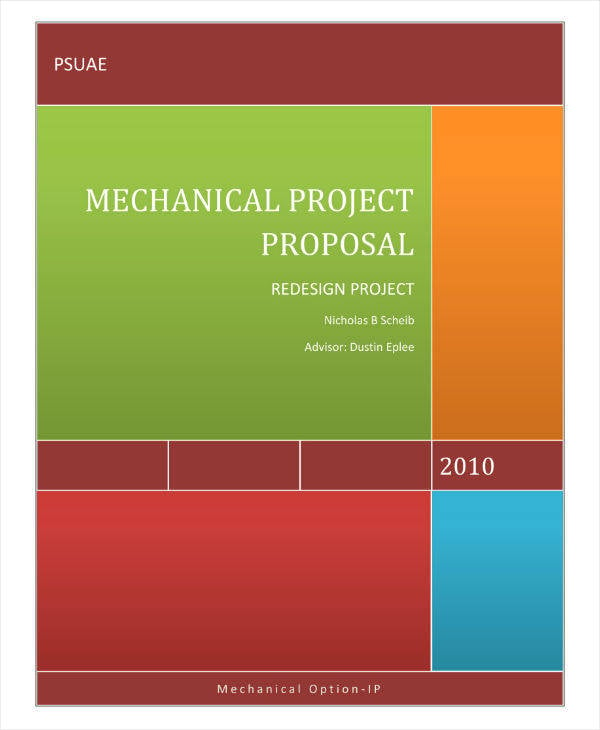 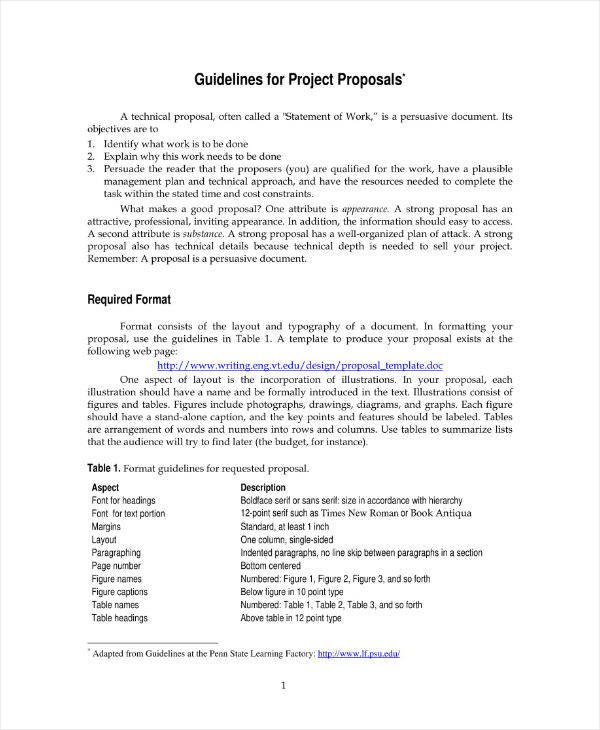 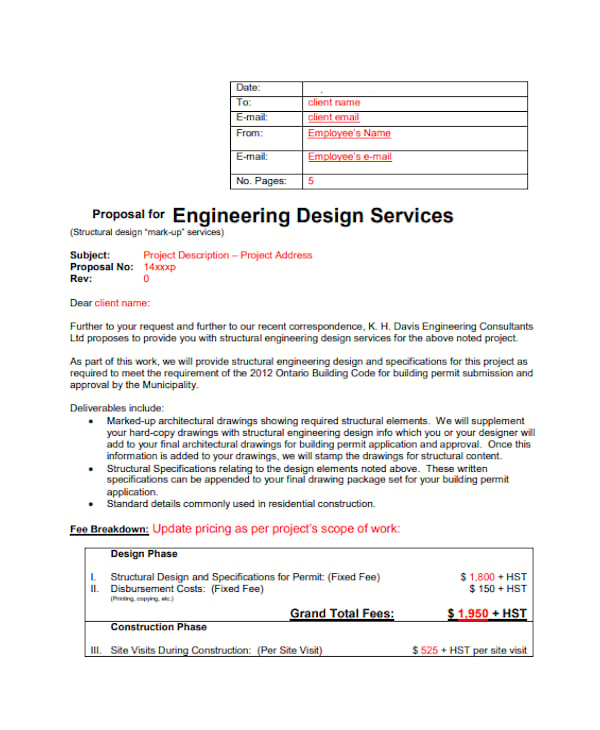 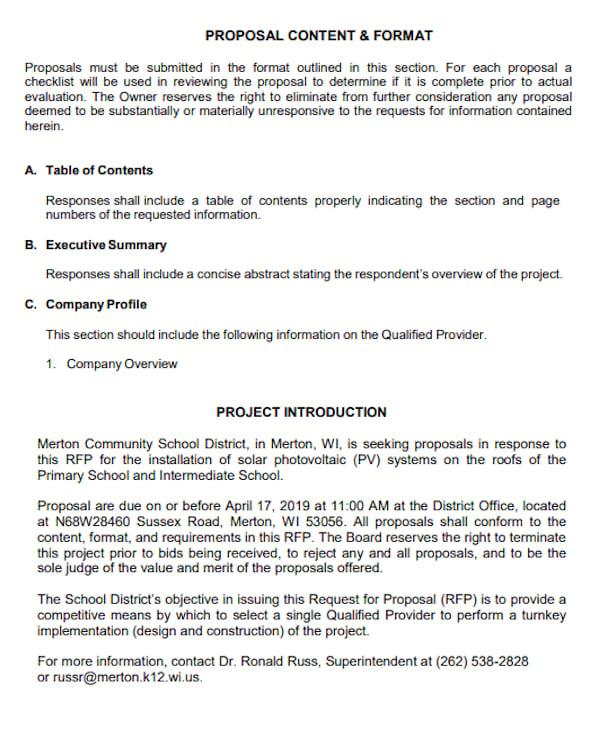 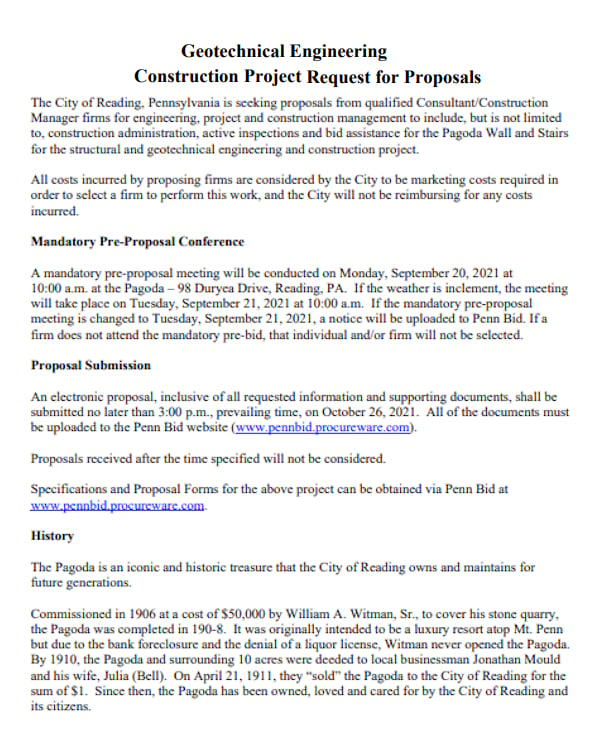 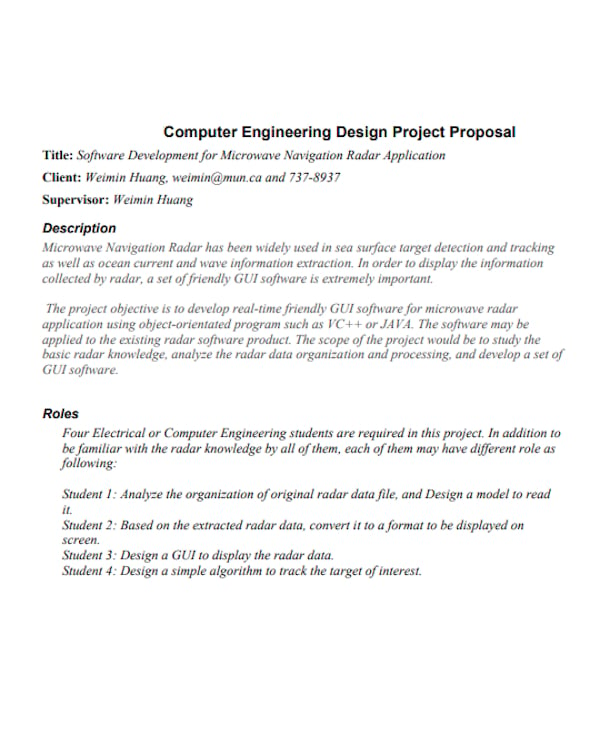 You must finish your proposal earlier than a given deadline. A proposal finished close to the cutoff time can be full of errors. Submitting such a proposal can be harmful to the pitch and may be the reason for its rejection. Furthermore, this can make the proposing team unprofessional in the eyes of the audience thus harming any chance for their future endeavors. Always allow time for proofreading and review of the proposal. Below are some things to consider and remember when applying the finishing touches to a proposal. You may also see student project proposals.

The reason for this goes without saying and has been mentioned above. Things to remember are to make sure that the graphs and charts included in the proposal (if there are any) are clear and legible. Also, make sure that the format is within the specified format provided by the requestor if the proposal is a response to an RFP. You may also see NGO project proposal templates in Apple Pages.

Some proposals are requested with a maximum number of pages. More often than not, when a proposal exceeds the number of page limit, the quickest solution would be to reduce the font size. This is not advisable as doing so will only make the proposal hard and irritating to read. Make this excess of a page an opportunity for trimming down unnecessary words in the proposal. An ideal proposal is lean and direct while providing complete details and information. Less is best. You may also see project proposal samples.

The executive summary will be the first impression the reader will have of the proposal. Make sure it is clear, concise, and above all, interesting. You may also see development project proposal templates in Word.