Contributions are an important part of a business. Whatever amount that comes out of it becomes useful for the operation of the business as a whole. Business owners also put in their contributions for the greater good of the business. But before any contribution comes to life, an agreement for it is written down. This is to ensure that both parties hold up to their responsibilities in the agreement, no matter what path it may take. Any contribution given in the business should be treated with utmost importance. 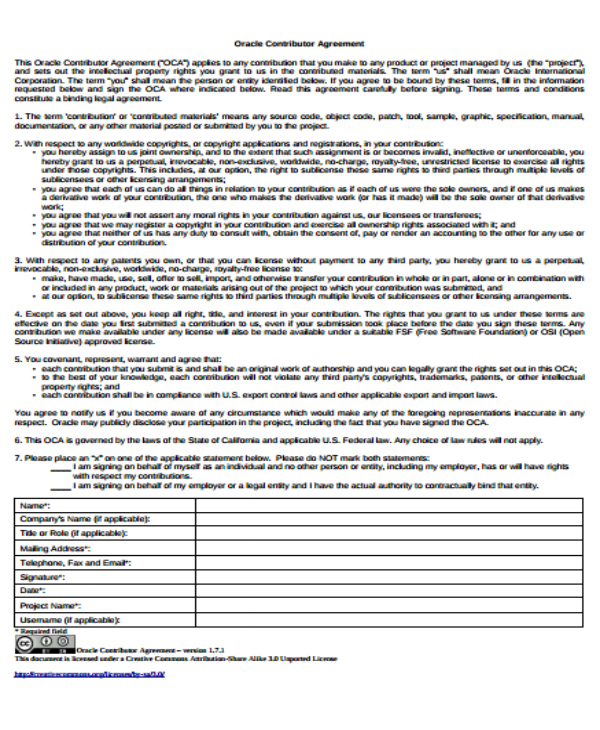 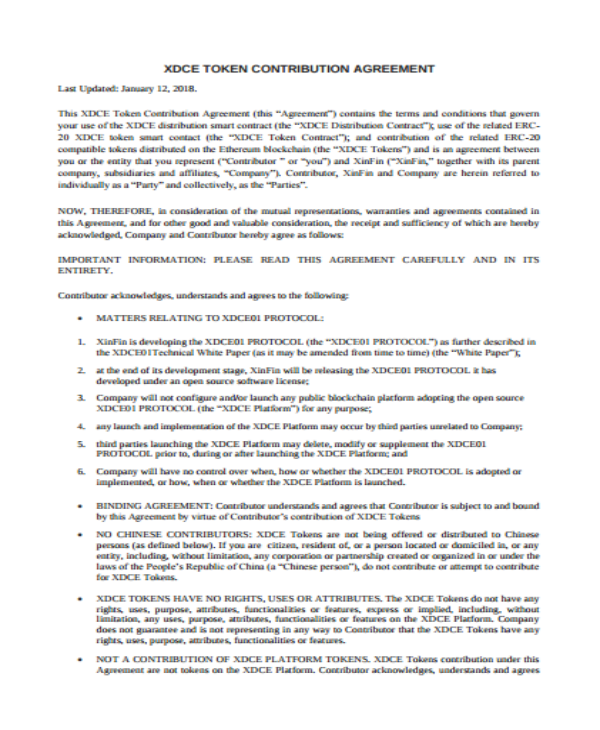 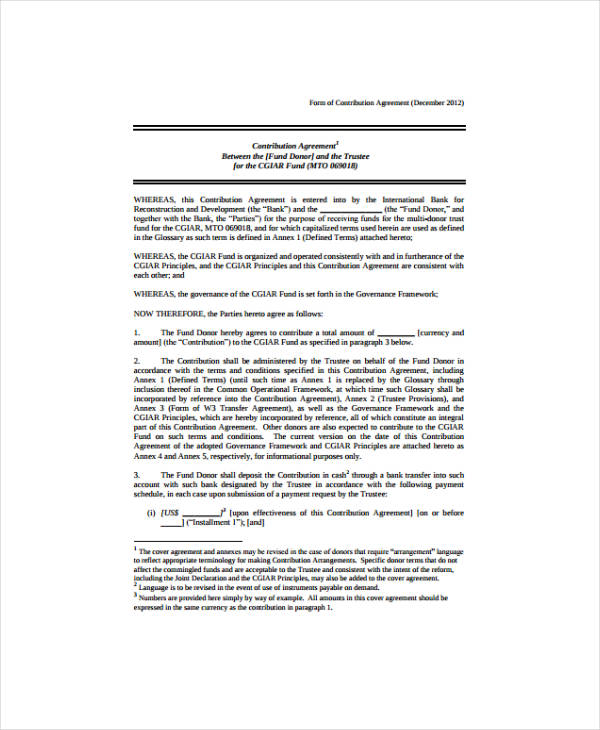 What Is A Contribution?

In the business setting, a contribution means a lot of things. In the government, it is an imposed payment for a set of benefits such as life insurance, housing, and pension. This is common in many different countries, where part of the worker’s salary goes to the mandated government benefits and are being paid every month. They can use these benefits in case of hospitalization, purchasing a new home, or retiring early from the workforce. You can also see partnership agreement templates.

It usually consists of a life insurance benefit, housing benefit, pension and retirement benefits, and withholding taxes. Each benefit has a certain amount to pay every month. In the accounting field, a contribution is the amount left after direct variable costs is subtracted from the sales revenue. This amount is used to pay a direct cost. This contribution is also called gross income. You may also see donation agreement templates.

In the world of insurance, a contribution happens when two or more insurers are liable for the covered loss of insurance and participate in paying the said loss. After paying the loss, the insurer becomes entitled to an equitable contribution, which allows him to recover the payment from another insurer. Whatever contribution it may be, it is always important to do your part and give your share. You’ll have the maximum benefit of it in the long run. You can also read joint venture agreement templates. 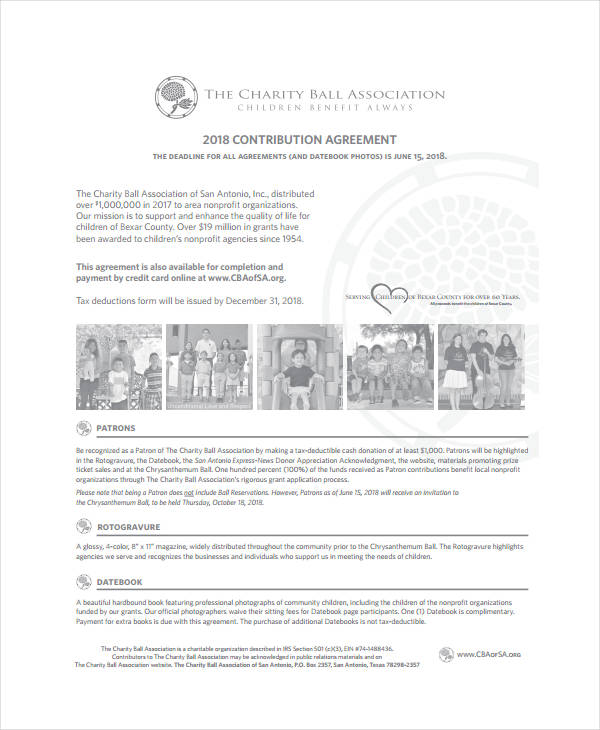 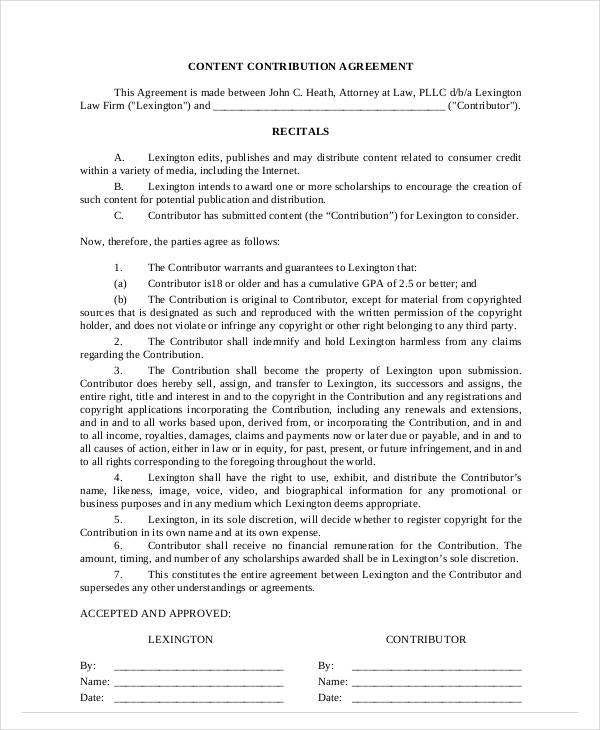 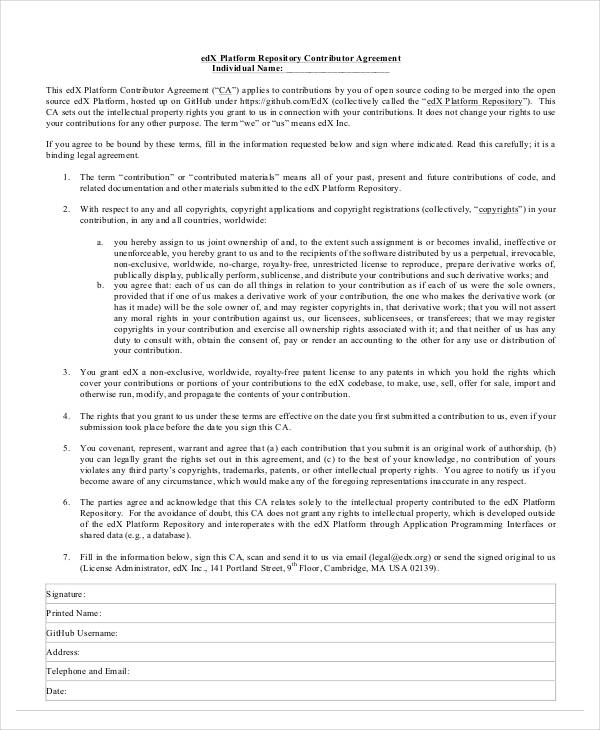 How To Draft A Contribution Agreement

Writing a contribution agreement is important when you want to give certain amounts of cash and in kind donations to a company. It is also written to lay out the conditions of an asset transfer. Writing this kind of agreement is easy with these steps:

1. Have a sit-down consultation

Prior to writing the whole agreement, consult a legal team or hire a lawyer to help you with the laws to be used. You should also research about sample contribution agreements to help you in structuring your own document along the way. You can also consult a law library and government agencies that can help you understand what a contribution agreement is all about. You may also like volunteer confidentiality agreements.

You must identify the parties entering the agreement. Name the two companies joining the agreement. State the full name of the company, its address, contact numbers, and the chief executive officers. If it is a business owner instead of a company, state the full name of the person, his designation and his contact details. Give them names so you can refer to them using those as you draft the whole document. You may also see printable agreement forms.

3. Specify what is being given 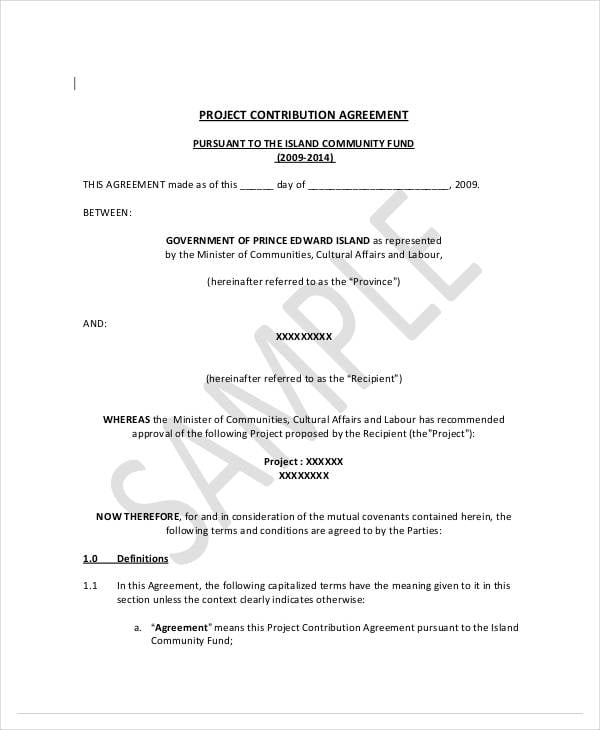 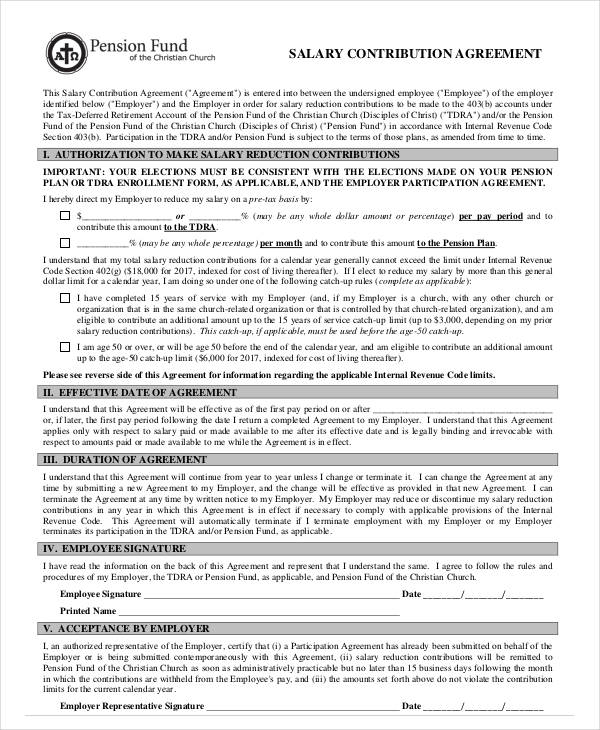 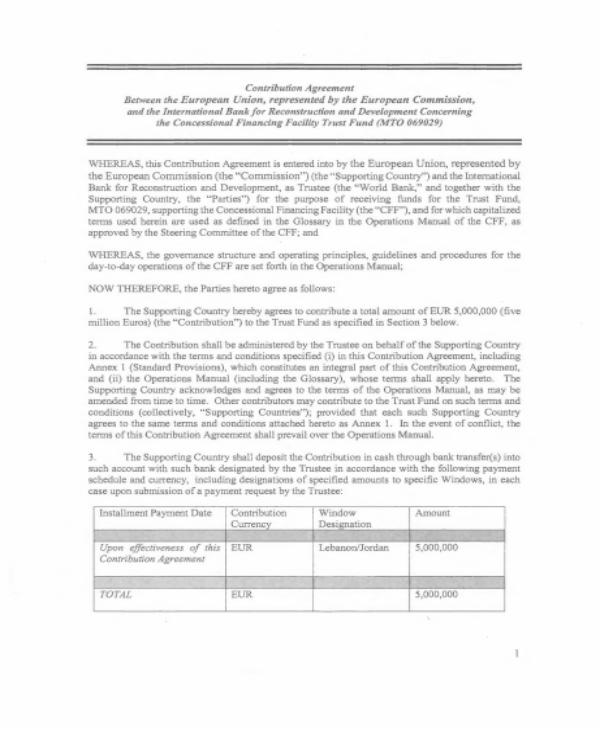 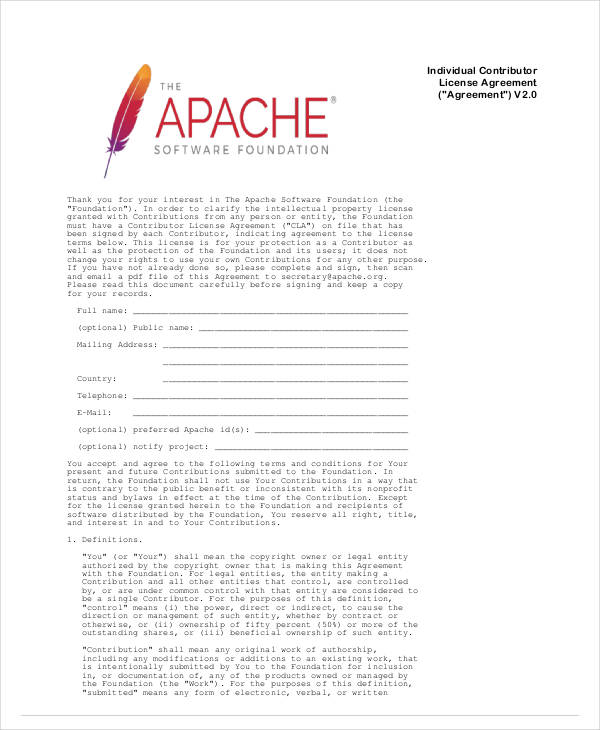 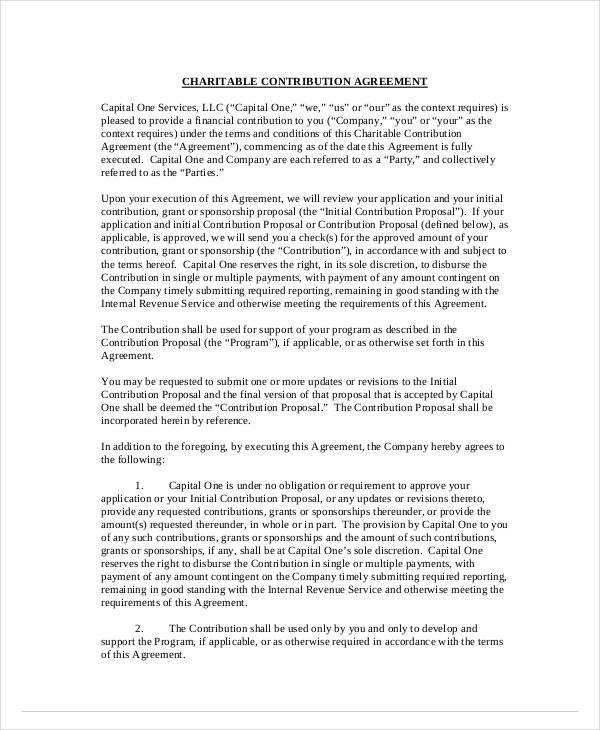 5. Define the laws to be used

Every agreement is tied in to the law to help it become more imposing to both parties. Clearly define the laws that bind the agreement to it. It should also contain the repercussions if the agreement is breached or becomes invalidated. References such as government handbooks and tax regulations are good ones to use. Clearly specify the steps to be taken when the agreement is being breached, and all the possible implications that come along with it. You can also read collaboration agreement templates.

Go over the document and see where you could have possibly lacked in writing it. Make sure the document is free of spelling and grammar errors. Rewrite some parts when needed. You may also see church confidentiality agreements.

7. Make copies of the agreement

After editing and proofreading the document, distribute it to the parties involved and to the agencies stated in the agreement. They have to know what they have agreed on so they can affix their signatures. You can also check out restaurant investment agreement templates. 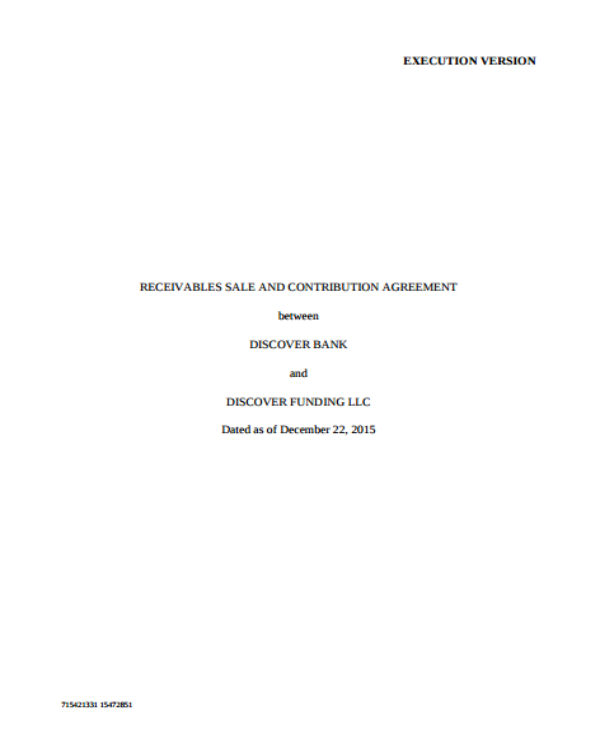 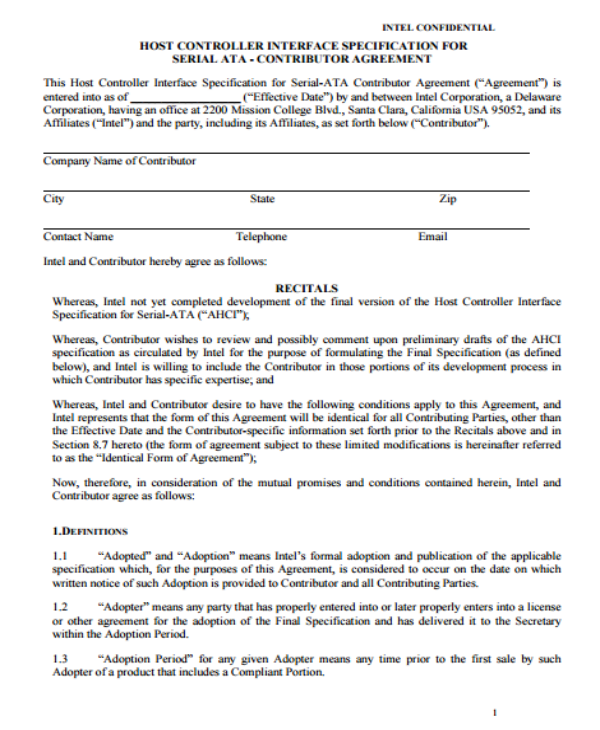 Difference Between Profit And Contribution

Profit and contribution are often confused with each other. One of the ultimate goals of business is gaining profit from their revenue as the business runs day by day. Profit is defined as the difference between amount earned and the amount spent for buying materials, making products and operating the business.

It is a financial gain. One of the measurements for profit is making a profit and loss report by the end of the month. Here, the report will show the profit gained, the amount spent for operations, and the total revenue earned by the business.

Every contribution is held in such great importance. It can be used as a gift or an asset to the company, and it depends on the receiving party on how they will use it. If you need more related articles regarding agreements, go over our site for more information. You can also read standard confidentiality agreements.