Diabetes is a disease in which the body has difficulties in producing a hormone called insulin. Insulin helps transport energy to the cells of the body from the food we eat. The body’s inability to produce insulin leads to the abnormal metabolism of carbohydrates, thus increasing the blood sugar levels in the blood and urine. You may also see action plan templates. 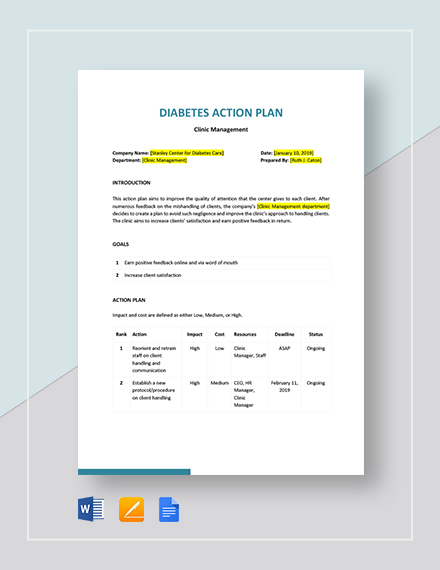 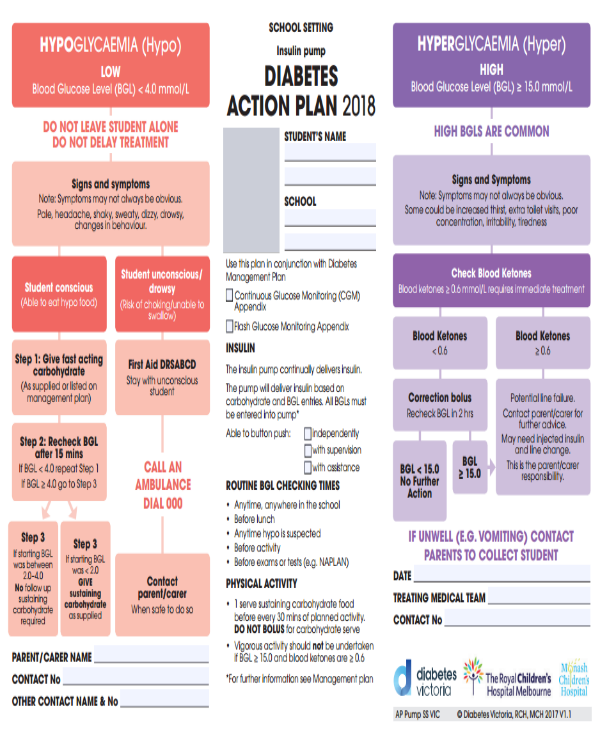 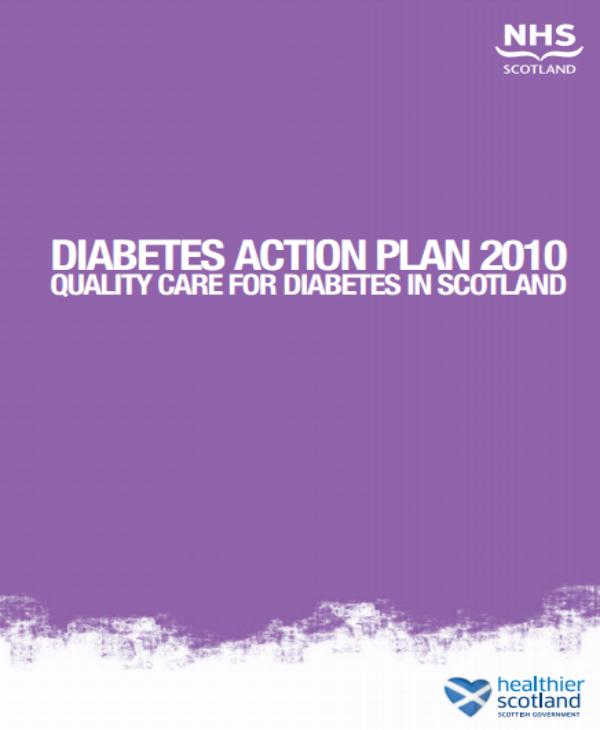 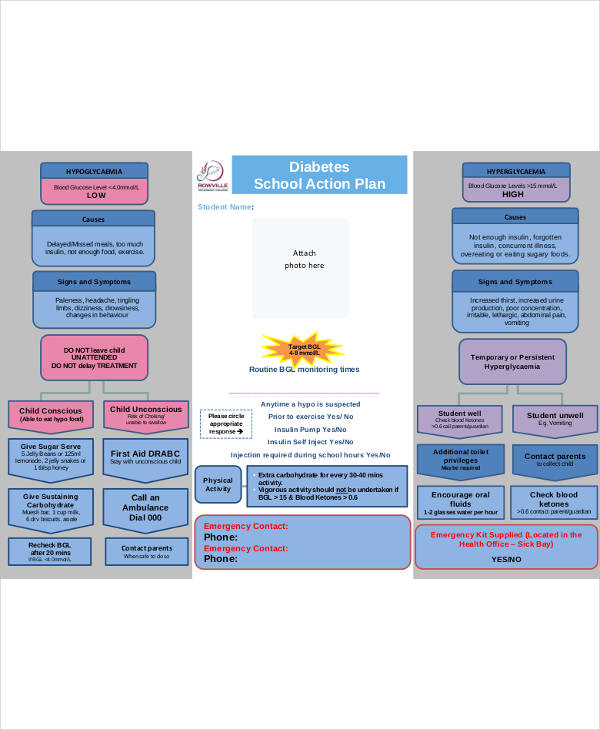 The cause of diabetes remains unknown. Some factors such as genetics, obesity, lack of exercise and poor diet may play a role in its existence. Some people suffer from this, no matter what the age is. However, diabetes can still be prevented by making an action plan for it. You may also see free action plan templates.

A diabetes action plan sample is a short document that puts into detail your courses of action to prevent diabetes. If you think you have been showing signs of diabetes in the past few days, it’s about time to write this action plan. Writing the action plan has to be comprehensive and detailed. In writing an action plan, you have to include the following: You may also see Sample Action Plan Templates.

State about the change that you want to happen in the first part of the action plan. It should be a vision of what you want to achieve in the future. Set a realistic goal to follow so you can make a list of what to do. You can set two or more smart goals to make your action plan more believable. You may also see  Strategic Action Plan Templates.

2. State the action plan itself

The action plan is the concrete step on what to do for the goal to be achieved. For example, if you want to reduce your sugar intake, you should set a goal of eating less sweetened food such as chocolate. The simple action plan for this is eating chocolate twice a week, instead of eating them five times a week. The action plan puts your goals into urgent action.

3. State the difficulties for achieving these goals

In every goal, there will always be a difficulty. State the things that might hinder you in achieving the goals you want to achieve, and what you can do about it. When you do, you will know what to do in case the hindrance comes and makes you unproductive. You may also see simple action plan templates.

4. Write about the importance and confidence of achieving the goals

Why is this goal important for you to achieve? How confident are you in achieving it? These are the questions that you need to address in the last part of your diabetes action plan. State the importance of the goal and be realistic in your confidence of achieving it. You may also see school action plans. 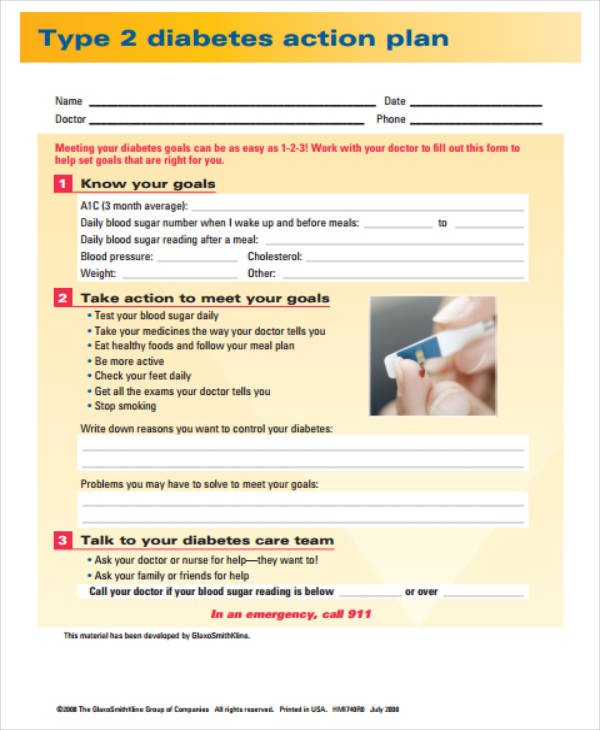 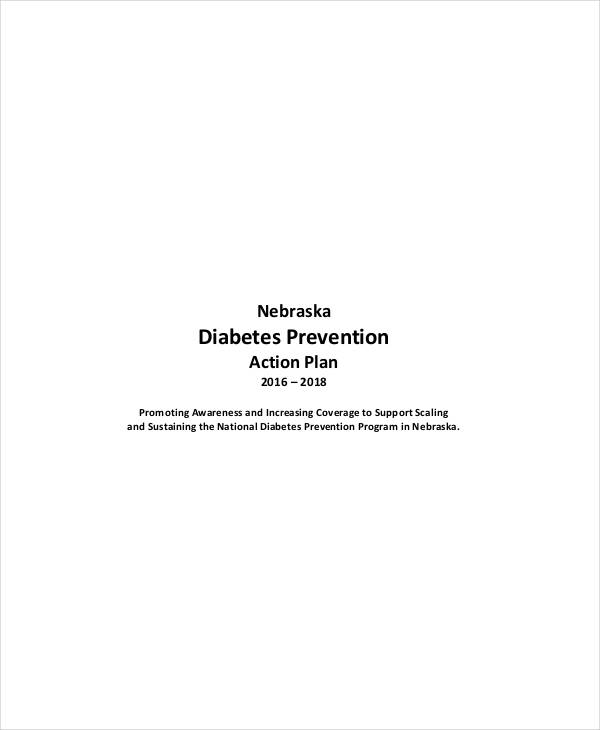 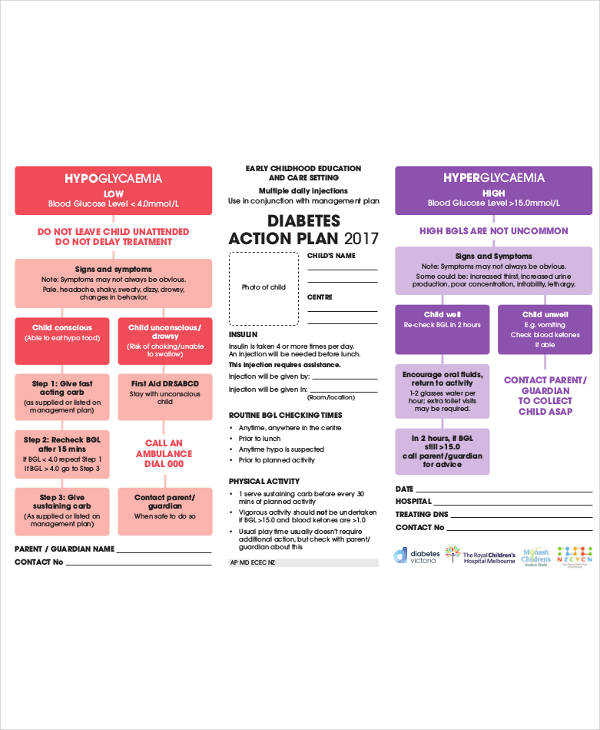 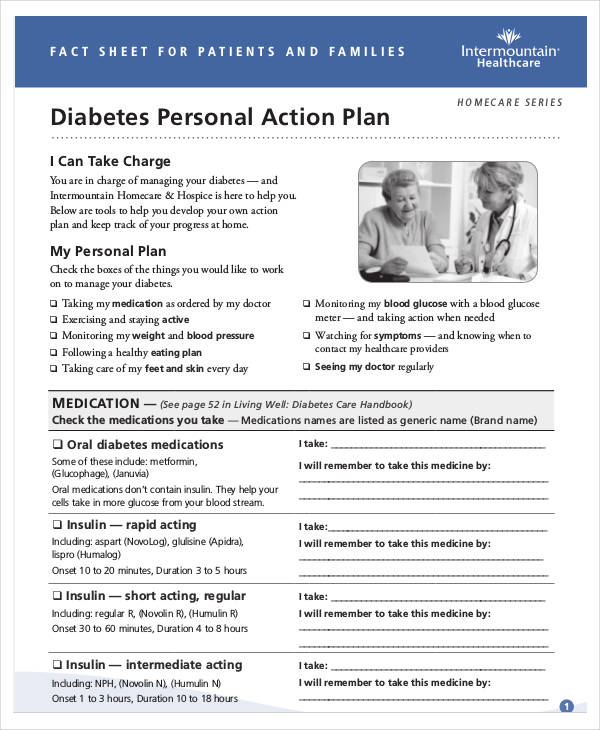 Diabetes is a condition in which blood sugar levels are abnormally high and can lead to several complications. The production of insulin which helps in digesting carbohydrates and transforming them into chemical energy is impaired, thus leading the sugar to be transferred to the blood and urine. There are two types of diabetes: the type 1 and type 2. Type 1 diabetes is the inability of the pancreas to produce enough amount of insulin. It has no cure and its cause is unknown. Type 2 diabetes starts with insulin resistance. This condition is the failure of the pancreatic cells to produce insulin. Lack of insulin develops as the disease goes on. You may also see allergy action plans.

Diabetes is a life-long condition which can affect several parts of your body. You should really take care of your sugar intake. For diabetic people, they need to monitor their blood sugar levels and lessen their sugar intake as much as possible. You may also see business action plan templates. 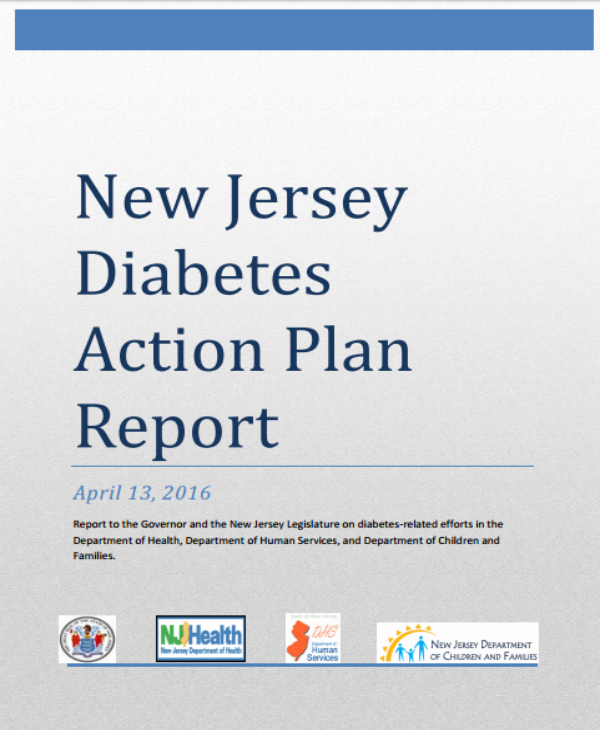 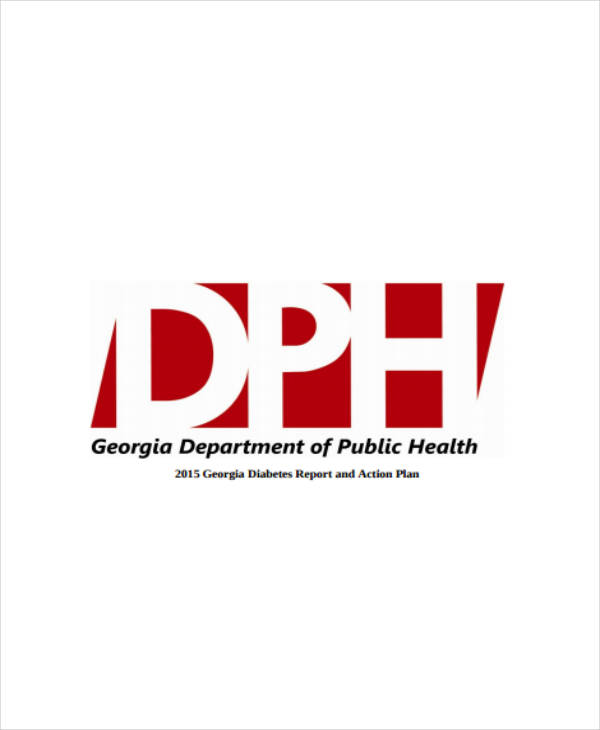 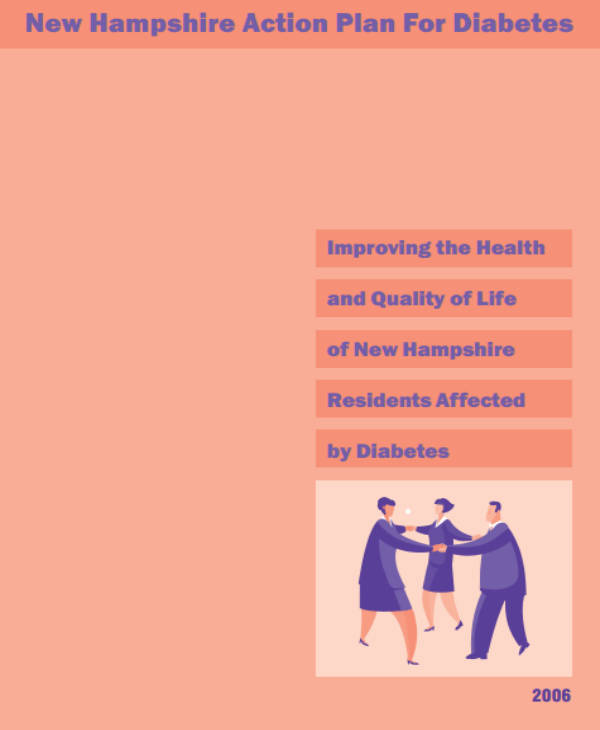 Diabetes is a disease that can result to complications if left untreated. Its causes and symptoms are evident in the most low-key way possible. The first 5 in this list are the causes of diabetes and the next 5 are its symptoms:

If your family has a history of diabetes from several generations ago, it is most likely that you will get one in the future. Diseases passed within the family is surely passed on to the upcoming generations. Diabetes is a disease that is common among families, and it is something families should watch out for. You may also see sample emergency action plans.

Insulin resistance usually happen to women in their late pregnancy, when the placenta produces too much hormones that can cause this phenomenon. During pregnancy, some women produce enough insulin to make up for its loss while some cannot. Another factor for insulin resistance that leads to diabetes is gaining too much weight during pregnancy. You may also see a sample strategic plan templates.

Some medicines can harm the body and disable it from producing insulin. These include niacin (a type of Vitamin B3), anti-seizure drugs, and pentamidine (a drug used to treat pneumonia). There is a big chance of developing diabetes if you have been taking these kind of medicines for another medical condition. You may also see career action plans.

4. Damage and removal of the pancreas

The pancreas produces the proper amount of insulin to help digest the food we eat, and convert the energy from food so it can be transferred to our body cells. If the pancreas gets damaged and eventually removed, it will have a hard time producing insulin for food digestion, leading to diabetes. You may also see sample affirmative action plans.

Some hormonal diseases can cause diabetes. One example of such is hyperthyroidism, in which the thyroid glands produce thyroid hormones excessively. This kind of hormone disease resists the production of insulin, thus leading to diabetes. You may also see simple action plan formats. 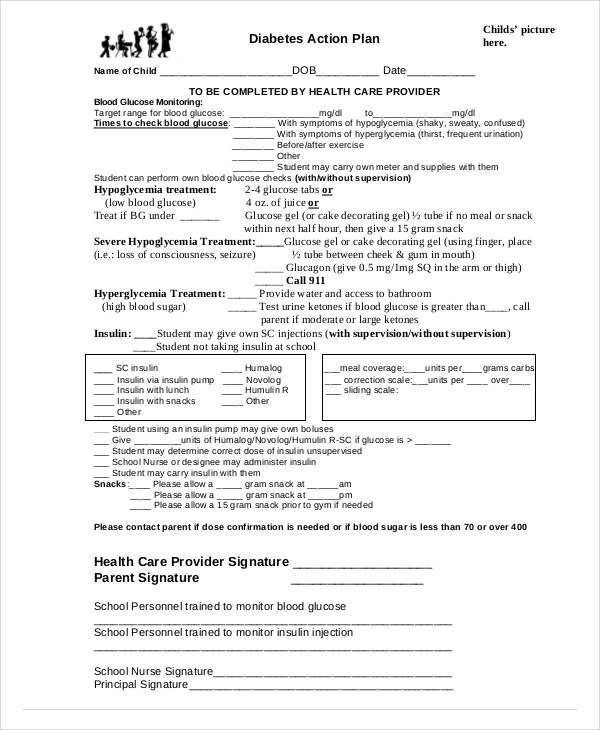 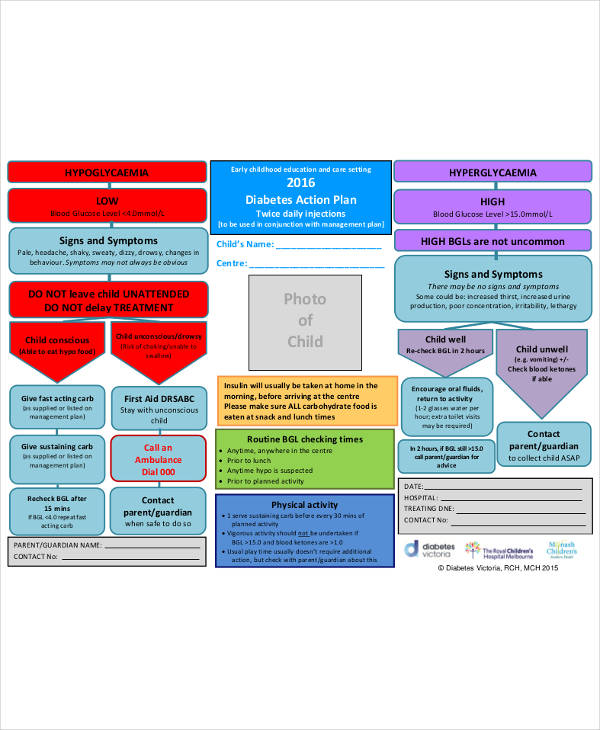 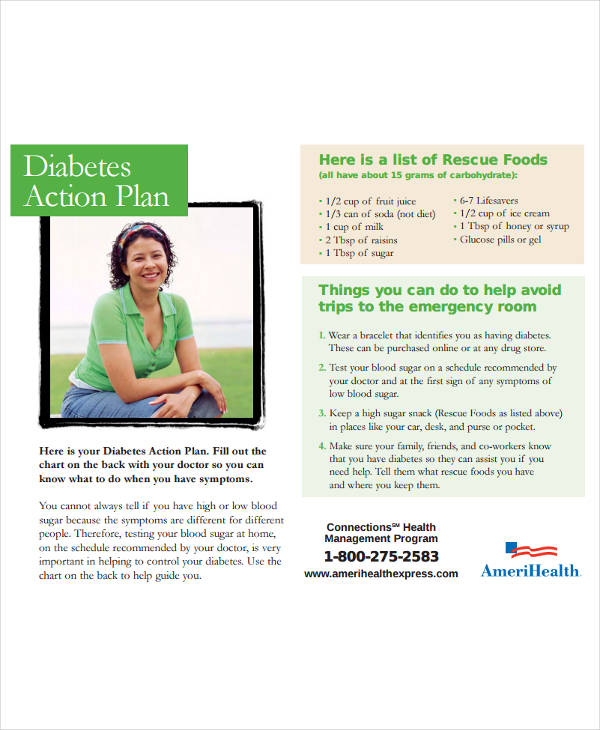 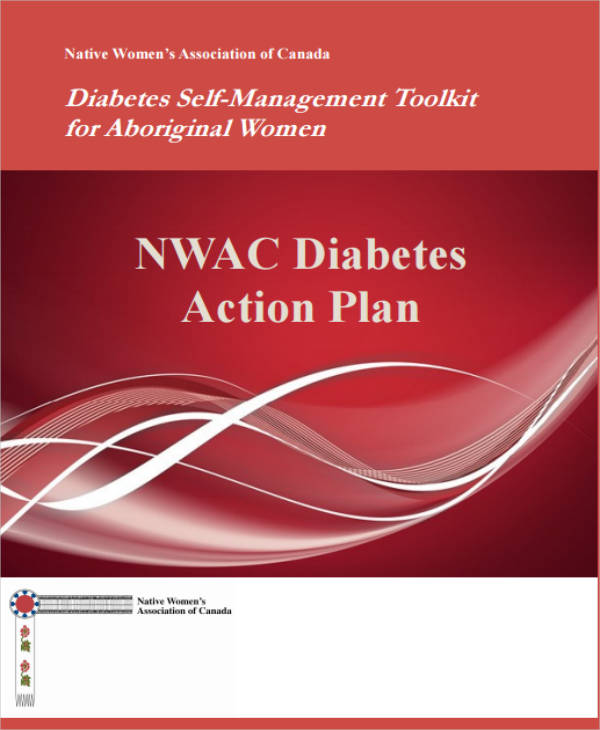 Diabetic people get easily dehydrated. They get thirsty excessively. Drinking lots of water and staying away from sweetened drinks can help in combating dehydration for diabetics. Always bring a bottle of water with you whenever you go to keep yourself hydrated. You may also see project action plans.

Diabetes can cause people to have the excess release of urine. They find their bladders getting full of urine even if they just went to the restroom a few minutes ago. There has been no notable treatment for this but it can be reduced in some way possible. You may also see employee action plans.

When someone is diabetic, their wounds don’t heal easily compared to others. A slow-healing wound such as cuts and lesions can lead to a string of infections that can cause amputation and other complicated conditions. You may also see emergency action plans.

This is more of a complication of diabetes than a symptom. Diabetes can lead to erectile dysfunction, which disables the man to perform well when engaging in sexual activities. You may also see incident action plans.

Diabetic people get hungry and tired easily. They find it hard to cope up with physical activities that require stamina and longevity. They eat excessively but all these energy gets used up easily. You may also see asthma action plans.

An action plan for diabetes is a crucial step into healthy living. While it is something that cannot be treated right away, it can be prevented and curbed with the right amount of care. You may also see sample incident action plans.