Boss’s Day is a yearly occasion that you might not have known existed. It’s understandable since it’s not as popular as federal holidays and religious holidays. However, that doesn’t mean Boss’s Day isn’t special. It has its own charm and it’s worth celebrating in your workplace. 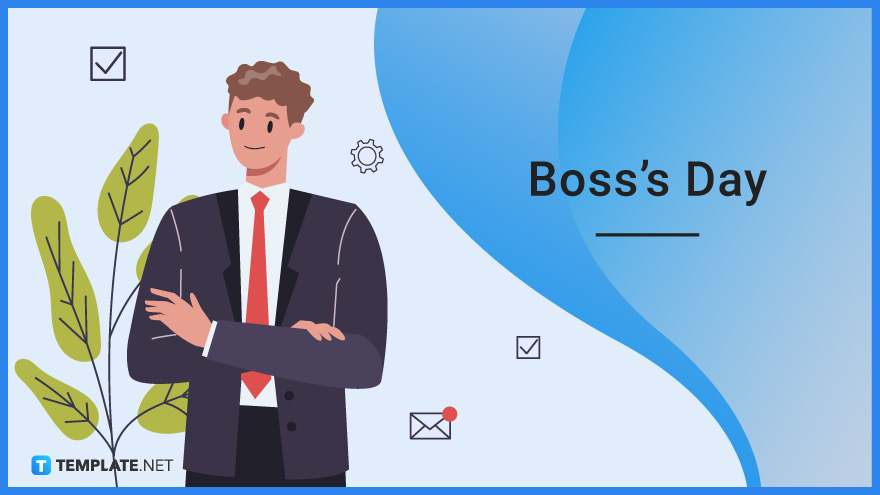 Boss’s Day is a secular holiday in the United States celebrated to strengthen the relationships between employees and employers.

Boss’s Day is a special annual celebration where workers express appreciation to their supervisors, managers, and other superiors.

When Is Boss’s Day?

Boss’s Day is celebrated every year on October 16. However, if the holiday falls on a weekend, it’ll be moved to the next business day which is typically Monday.

Boss’s Day may sound like a gimmick celebration, but it was established with a real purpose that professionals should know.

Appreciate the Work of Bosses

Not every worker regards his or her boss highly. Whether you like your boss or not, you can’t deny that his or her job is tough. Bosses work tirelessly to manage the company and keep their employees in check. They make the hard decisions that not everyone in the workforce agrees with. Their efforts keep the business afloat which also means securing everyone’s jobs.

On Boss’s Day, shower your manager or supervisor with appreciation. Let them feel that their work is acknowledged and that you’re thankful for their mentorship.

Break the Stigma of All Bosses Are Tyrants

Patricia Bays Heroski felt that employees, especially younger ones, don’t appreciate their bosses. So in 1958, she created the Boss’s Day holiday and proposed it to the United States Chamber of Congress. She created Boss’s Day in honor of her father who she worked for.

While working for her father, Patricia saw firsthand how hard being a boss can be. Boss’s Day aims to break the stigma that all bosses are tyrants. Bosses can be hard to deal with, but their strictness is for the good of the company and everyone working in it. Boss’s Day empowers employees to understand the perspective of their superiors.

Boss’s Day is a perfect time of the year to build strong employee-employer relationships. Good relations between workers and superiors are crucial to running successful operations.

Many working teams use Boss’s Day to conduct team-building activities with their bosses. It’s important to build a camaraderie with superiors. Boss’s Day is a day to bridge all the gaps that hinder a good relationship with your manager or supervisor.

On Boss’s Day, offices will organize parties dedicated to the likes of team leaders, managers, supervisors, CFOs, and CEOs. There’ll be food and drinks and beautiful Happy Boss’s Day cakes. Some employees will be taking out their bosses for lunch and giving them gifts as a gesture of appreciation. Other companies will conduct a special ceremony to present awards and certificates of recognition for the efforts of their management team.

How to Create a Boss’s Day Social Media Post

During special occasions like birthdays, weddings, and Teachers’ Day, we tend to post about them on social media. You can do the same on Boss’s Day. That said, we’ll show you the basics of creating a Boss’s Day social media post.

1. Launch Facebook on your mobile device or computer web browser and select “What’s on your mind?”

2. Select the Photo icon and upload pictures of your boss. You can also use pictures of you and your boss, or if you have none, you can use free Boss’s Day photos online.

3. Write a caption for your Boss’s Day post. It can be a message of appreciation to your boss, a Boss’s Day quote, or a simple greeting of “Happy National Boss’s Day!”

4. Tag your boss by mentioning his or her Facebook username.

5. Select either the Public view or Friends Only view to determine your post’s visibility.

1. Launch the Instagram app on your smartphone and select the “+” icon. It’s located in the upper right corner of the Instagram screen.

2. Upload a photo of your boss or any photo related to Boss’s Day from your phone gallery. Make sure to choose a photo that’s Instagrammable.

3. Use Instagram’s filters to make some enhancements to the photo. You can improve the coloring, lighting, and texture of the image.

4. Just like on Facebook, write a Boss’s Day message for your boss, a Boss’s Day quote, or a simple Boss’s Day greeting to be used as a caption. To end the caption, you can use hashtags relevant to Boss’s Day to optimize your post.

1. Launch Twitter on your smartphone or desktop computer and select Compose.

2. Start writing your meaningful Boss’s Day tweet. It could be an appreciation message to your manager, a short essay about the importance of bosses, or a popular Boss’s Day quote. Use the #BossDay or other related hashtags that can help your Twitter post’s optimization.

3. Upload Boss’s Day photos from your computer or phone gallery. If you don’t have one, you can grab free images from Google and other websites offering free photos.

1. Launch Whatsapp and head to the Status tab.

2. Select the Camera icon and upload a Boss’s Day photo from your phone gallery. If you have photos of you and your boss, those would be ideal.

3. Insert stickers and other graphics into the photo so it looks livelier.

Here are some important and interesting facts that you should know about Boss’s Day:

Boss’s Day is a United States holiday celebrated to honor all the hardworking bosses across all industries and to strengthen employee-employer relationships.

Labor Day is a US federal holiday honoring the efforts and contributions of every worker and laborer in society.

Planning to celebrate Boss’s Day? If you are, here are some excellent ideas to make it an unforgettable celebration for your superiors:

Why do we celebrate Boss’s Day?

We celebrate Boss’s Day to build stronger relationships with our bosses and have a better experience working with them.

What do you get your boss for Boss’s Day?

On Boss’s Day, get your boss something that he or she always wants such as a specific brand of pen, coffee mugs, clothes, and other items; you may also take your boss out for lunch or dinner.

What is the goal of Boss’s Day?

The goal of Boss’s Day is to build camaraderie between employees and employers and to break the stigma that all bosses are abusers or tyrants.

How do you thank your bosses on Boss’s Day?

You can create a DIY thank you card for your boss and deliver it to him or her personally on Boss’s Day.

Why is Boss’s Day worth the effort?

Boss’s Day is worth the effort to celebrate because it’s the perfect day to show appreciation to your bosses, party with them, and make amends with them if you had workplace conflicts; your efforts to celebrate Boss’s Day will result in a healthy workplace environment.

What do you say on Boss’s Day?

On Boss’s Day, you can greet your supervisor, manager, or CEO with a “Happy Boss’s Day” or “Happy National Boss’s Day” either verbally or through writing.

What is the meaning of Boss’s Day?

Boss’s Day is an official holiday to celebrate all the bosses in the nation and appreciate their efforts to establish a healthy work environment and positive work experience for their employees.

Who came up with Boss’s Day?

The person who came up with Boss’s Day is Patricia Bays Haroski, a former State Farm employee; her inspiration to create Boss’s Day was seeing her father being an exceptional business owner and a fair boss to his workforce.

Should you really celebrate Boss’s Day?

No one will judge you if you don’t celebrate Boss’s Day, but you should try it to make your boss happy; we never know, celebrating Boss’s Day will lead to having a healthy relationship with your boss, and that could bode well for your career.

What is the role of a good boss?

The role of a good boss is to treat his or her employees fairly, delegate their workloads equally, give them fair pay, give them bonuses, and ensure a healthy work environment.

When and where was the first Boss’s Day celebrated?

Boss’s Day was created in 1958, but it became an official holiday in 1962 and was first celebrated across the United States.

The people celebrating Boss’s Day are everyone working for a superior and all the bosses in the nation.

How do we celebrate National Boss’s Day?

We celebrate National Boss’s Day by organizing a party for our boss, giving our boss gifts, and expressing our deepest gratitude for all their tireless efforts for the staff.