Republic Day is one of the most important public holidays in India. This holiday is when the nation comes together to remember and commemorate the anniversary of when India became an independent republic government. 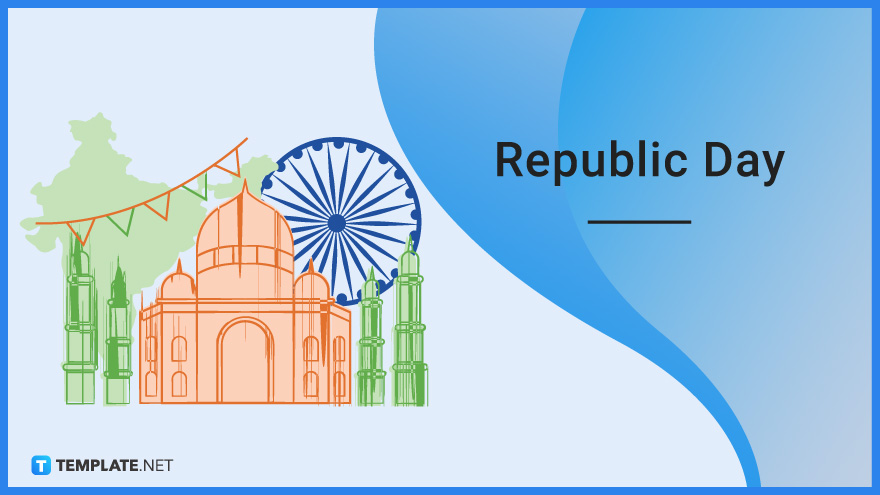 Republic Day is a public holiday in India that celebrates the day the Constitution of India was adopted and effectively replaced the Government of India Act of 1935.

The day is marked by various events and activities across the country with people holding parades, cultural presentations, and speeches.

When Is Republic Day?

India Republic Day is an annual celebration that is observed every 26th of January. The date is significant because it was the day that the Constitution of India formally took effect after being adopted by the Indian Constitution Assembly on 26 November 1949.

India Republic Day holds significant importance for the country’s national identity, and the following points are just some of the primary reasons why the holiday is important to the citizens and people of India.

India was under the control of the British empire from roughly 1858 to 1947. The struggle for freedom and independence from Great Britain is remembered and celebrated annually on Republic Day. With the adoption of the Constitution of India, the nation became an autonomous state and an independent republic form of government.

Day of National Pride and Patriotism

Republic Day, just like Independence Day, is a day of pride and joy. Patriotism and national pride are especially highlighted and the holiday serves as an important reminder of the fight and struggle for democracy. Citizens partake or participate in all kinds of patriotic activities and ceremonies to celebrate national pride.

Commemorate the Constitution of India

India Republic Day marks the day that the Constitution of India formally took effect. The Constitution is an all-important document that became the governing document that subsequently made the country of India a republic. The document replaced the Government of India Act of 1935 and as a result, it marked the end of British rule, dominion, and colonialism.

What’s in the Republic Day?

Republic Day is marked with nationwide celebrations and programs. People take to the streets and participate in several events and activities. School children design Indian flags, military officers partake in Republic Day exercises and performances, a series of contests and parades are held, and friends and families gather to spend time with one another since it’s a public holiday.

How to Create a Republic Day Social Media Post

Although actively participating in Republic Day events and activities is ideal, you can still show your patriotism and national pride by crafting a Republic Day social media post. Simply follow the basic step-by-step guides below and create a post in no time! 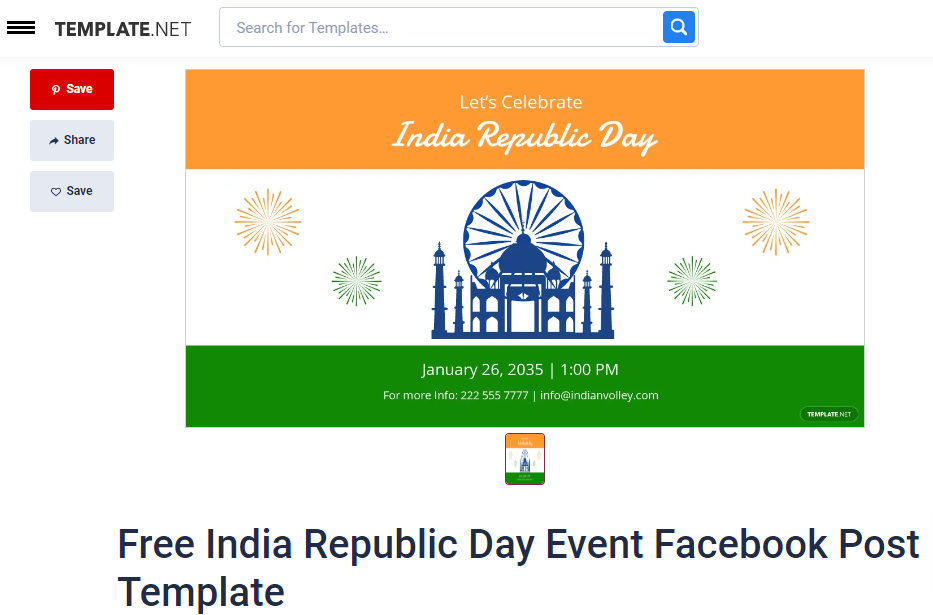 The first step is to search for a Republic Day Facebook post template. Template.net offers some free and editable Republic Day templates specifically designed for Facebook and other social media sites.

The next step is to edit the text in the template. You will see the Fill tool in the sidebar menu, just click on the pencil icon and create a custom Republic Day message or greeting.

After editing the text, you can add as many graphics as you want. Choose from dozens of graphics such as frames, stickers, and shapes. To look for a specific image or object, simply use the search bar in the editor tool.

Feel free to resize, crop, or rotate the text and elements in the template. Change the background color, text size, font, and much more with easy-to-use formatting tools.

The first step is to choose a Republic Day YouTube banner template. Use the search bar located at the top of the screen to search for templates on the site.

On the Editor tool, click on Background to change the color scheme of the template. The traditional colors used for Republic Day are the colors of the Indian flag which are white, orange, and green. But you can add other non-conventional shades to your design if you want.

Make your post stand out by incorporating stunning graphics and adding relevant images. Choose from the wide selection of shapes, objects, frames, clip art, and other elements when you click the Graphics tool in the sidebar menu.

Insert animation and special effects into the template by clicking the Animate button in the settings bar. Choose an effect and you can adjust the transition time and duration as well.

When you are editing, simply save the template. Select the Download or Share button located in the upper right section of the window.

There are several Republic Day Instagram posts and story templates on the site. Choose a template that meets your needs, preferences, or tastes.

2. Input the Caption or Message

Once you open the editor tool, you can find the Fill function on the sidebar menu. Click on the pencil icon to edit the text in the template. 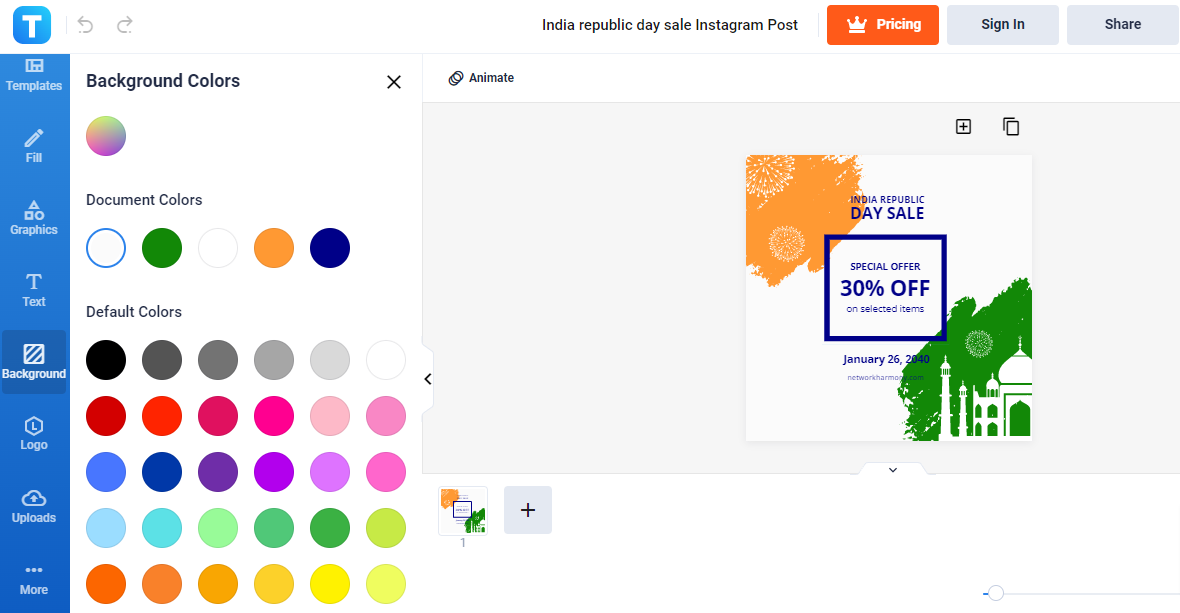 After typing in your message or text, you can customize the background color accordingly. The recommended color palette for Republic Day is the traditional colors of the Indian flag but you can get creative and design the template however you want.

Decorate the template further with pictures, clip art, and other elements. Select the Graphics tool in the sidebar menu and use the search bar to look for the right image.

When you are done customizing and editing, you can then download or share the file. You can save the template in a variety of file formats including GIF, PNG, and JPG formats.

Republic Day celebrates the birth of India as a democratic republic nation, with special emphasis being given to the enactment of the Constitution of India.

Independence Day is an annual public holiday in India that is observed every 15th of August; the holiday celebrates the anniversary of India’s independence from Britain/United Kingdom on the 15th of August 1947.

If you are eager to take part in Republic Day activities, you are bound to find something of interest in our Republic Day ideas and examples. You can also refer to these if you simply want to show your support and solidarity by posting an Indian Republic Day message or photo on social media.

Look forward to these different activities at your next Republic Day celebration:

Use any of these creative and beautifully designed Republic Day templates and images to liven up your social media posts! 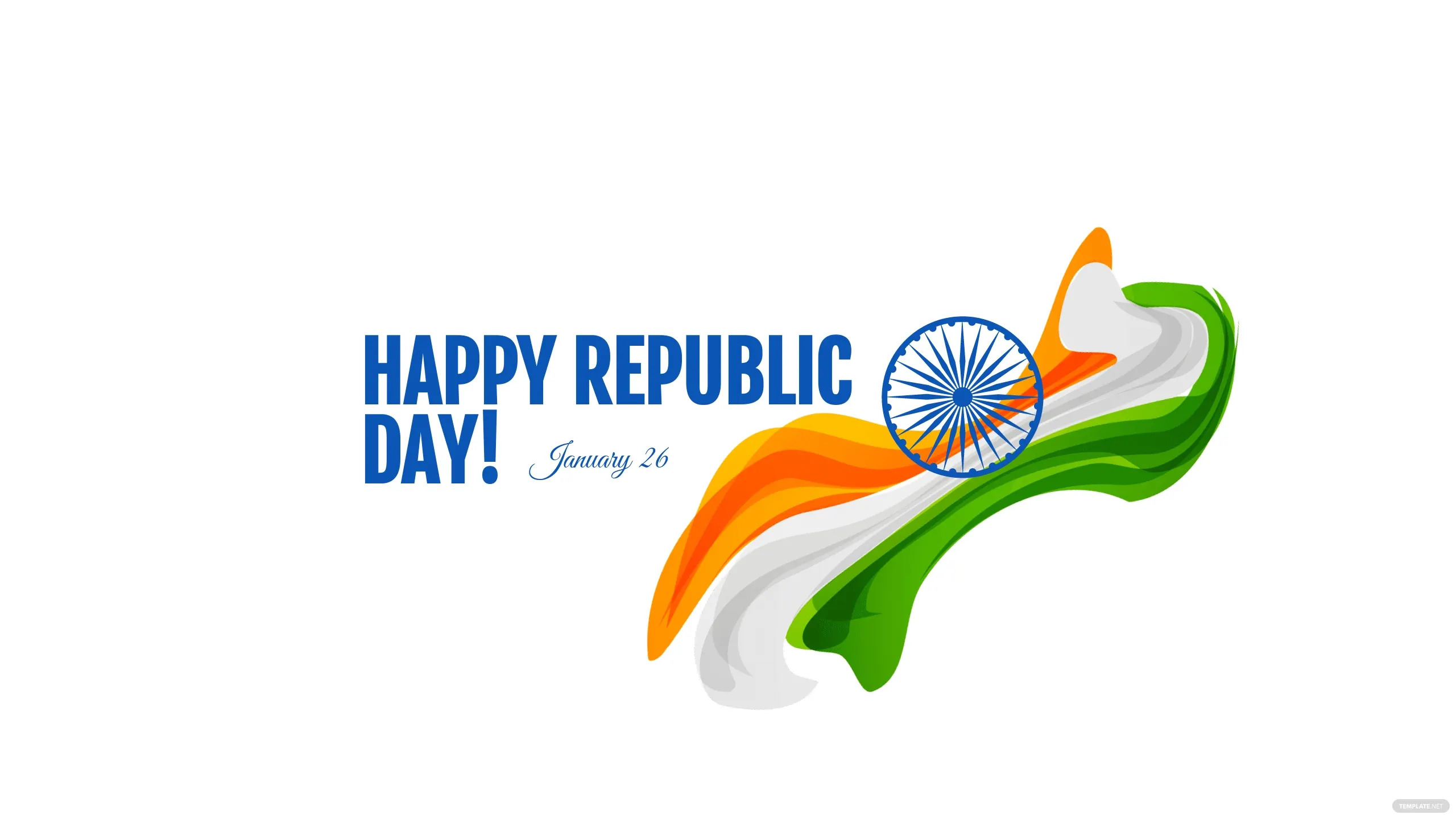 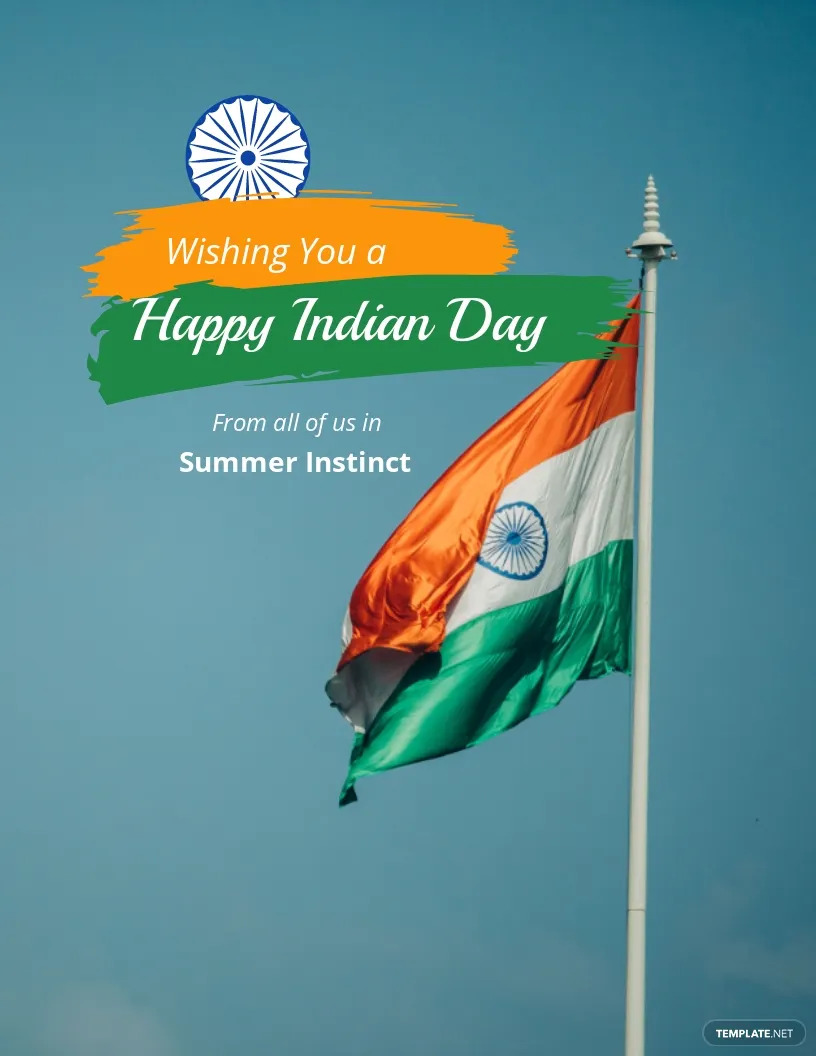 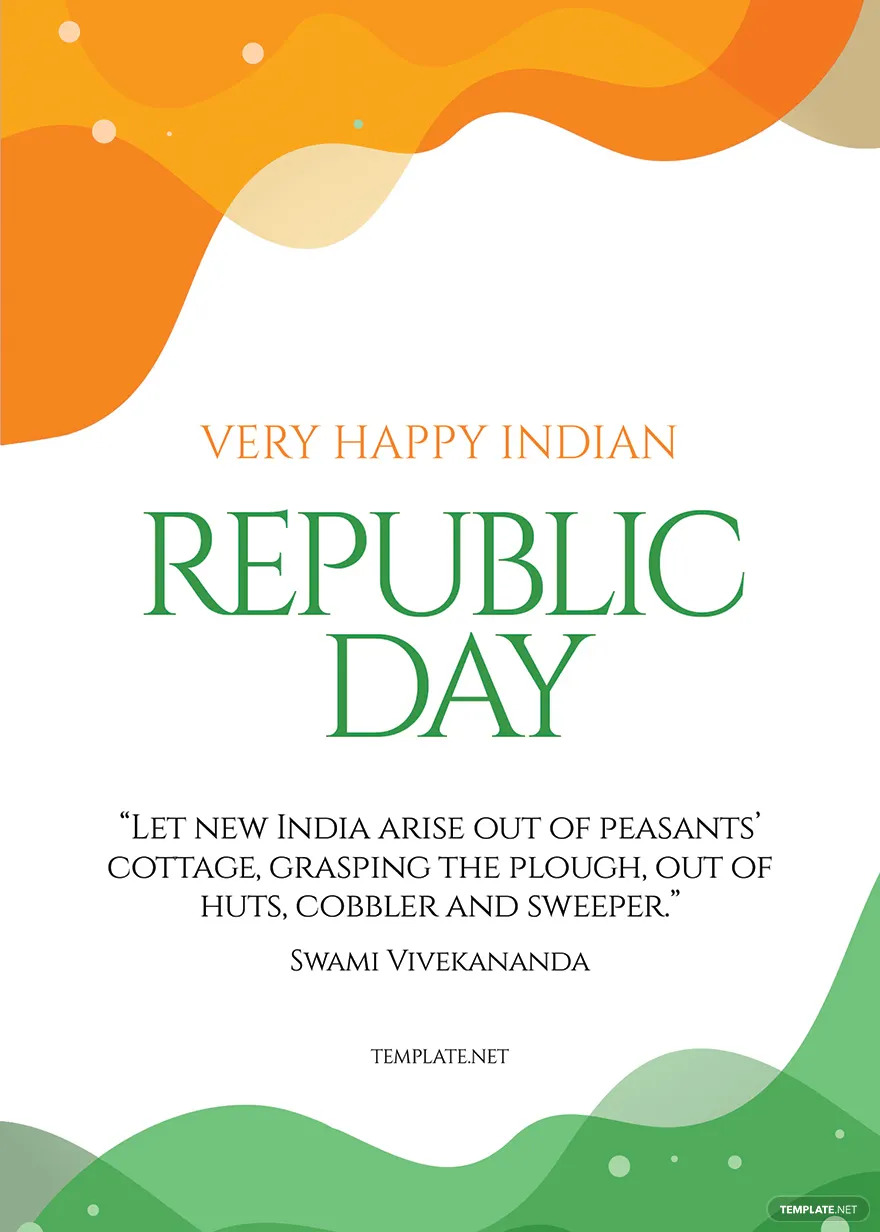 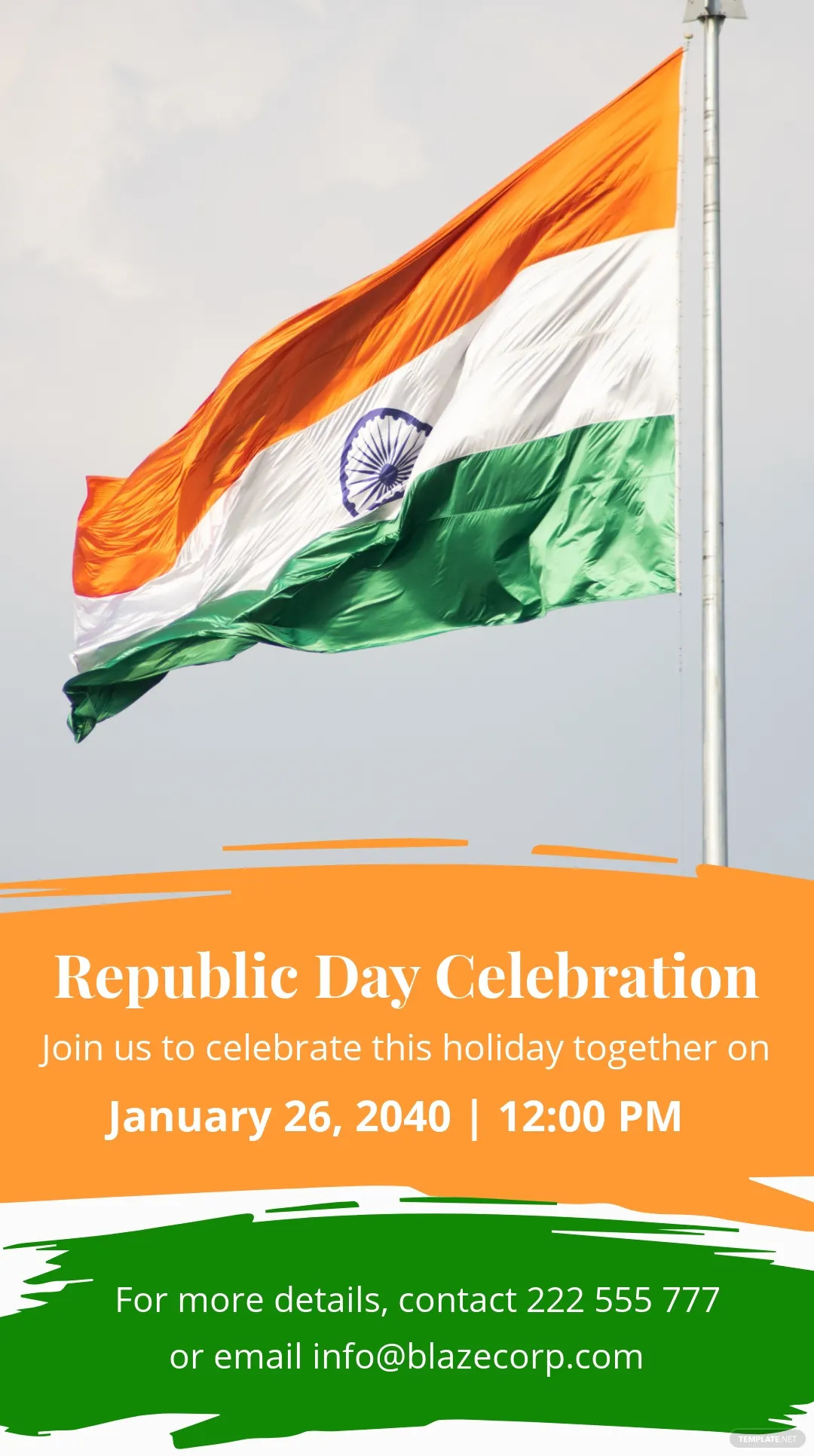 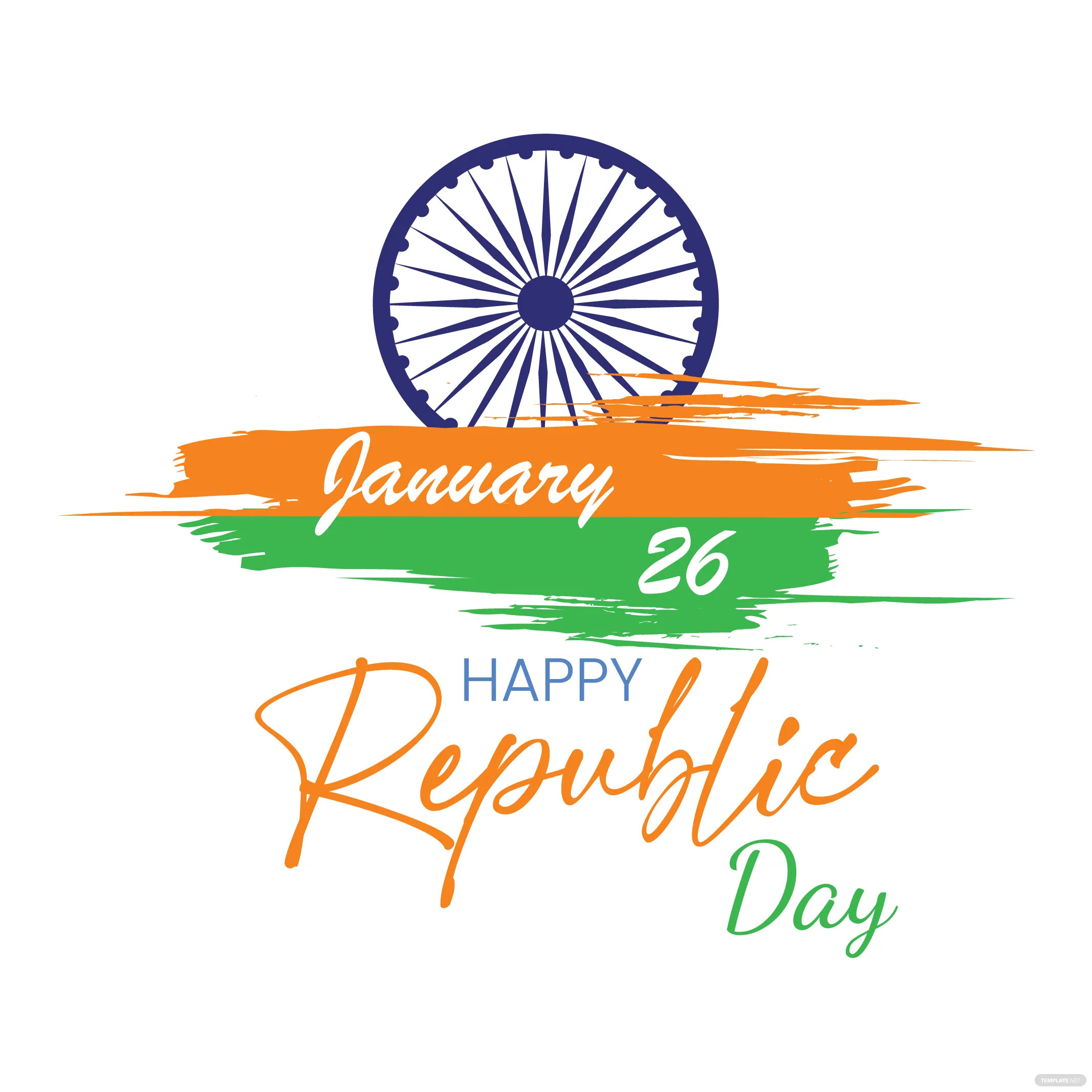 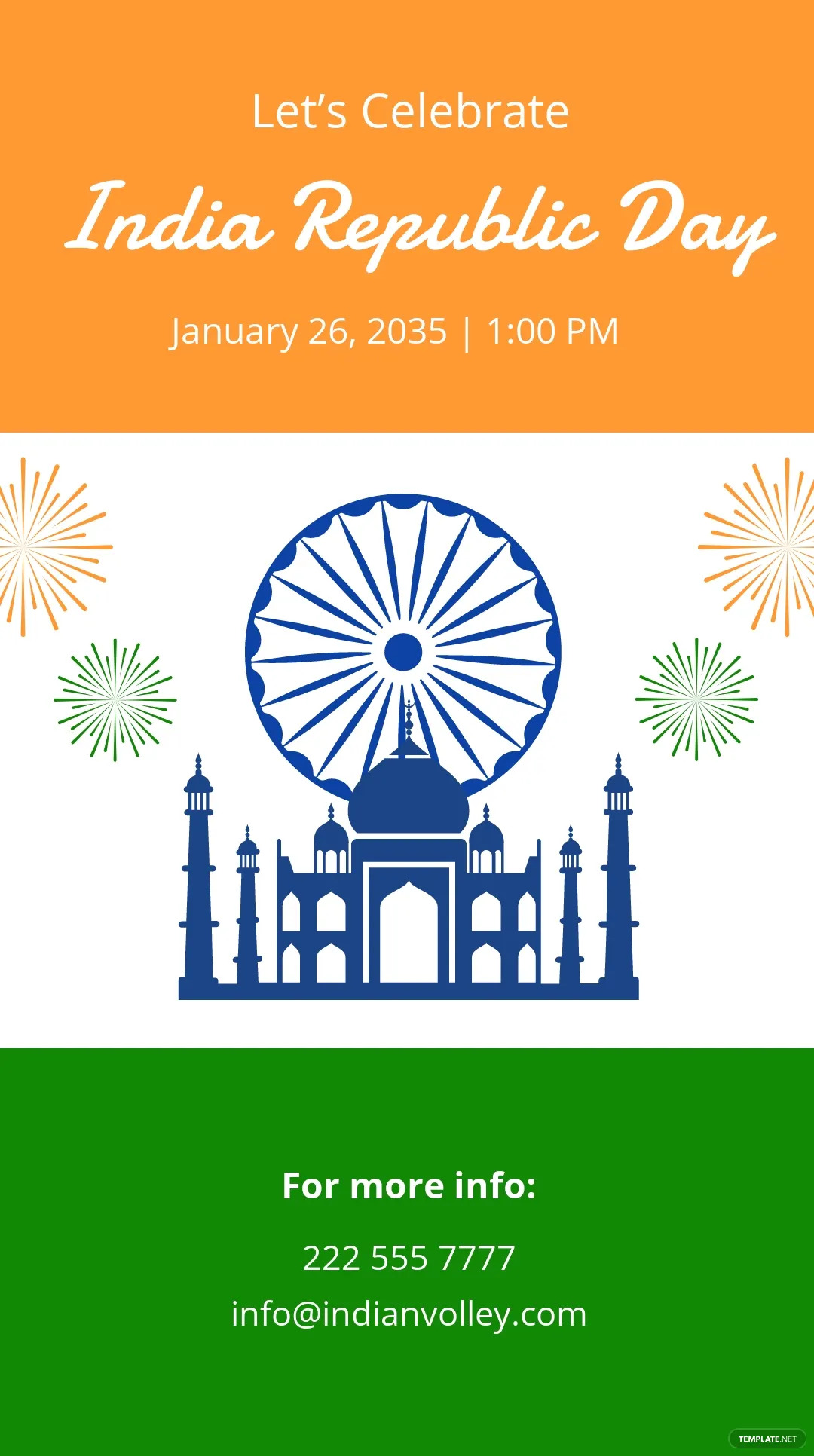 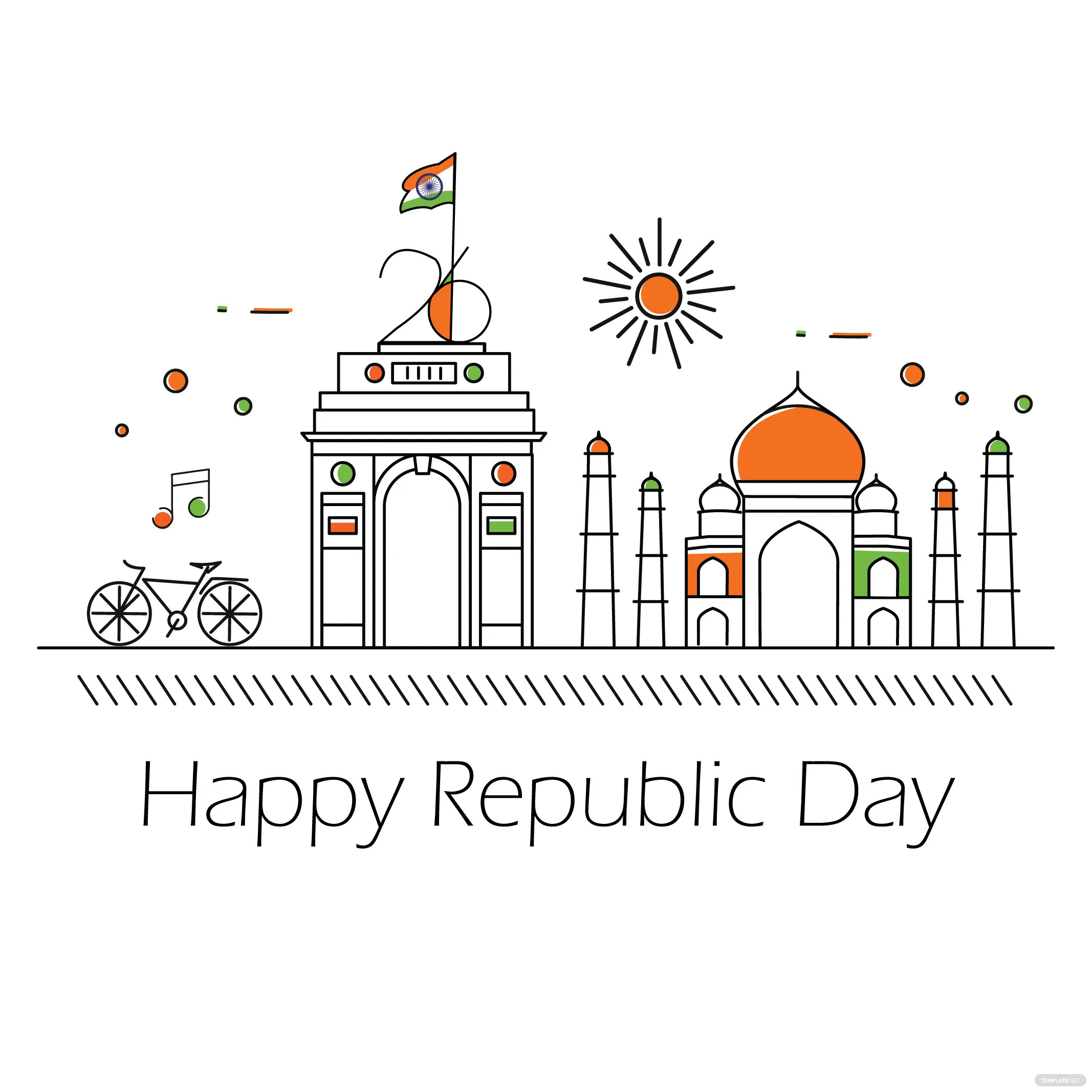 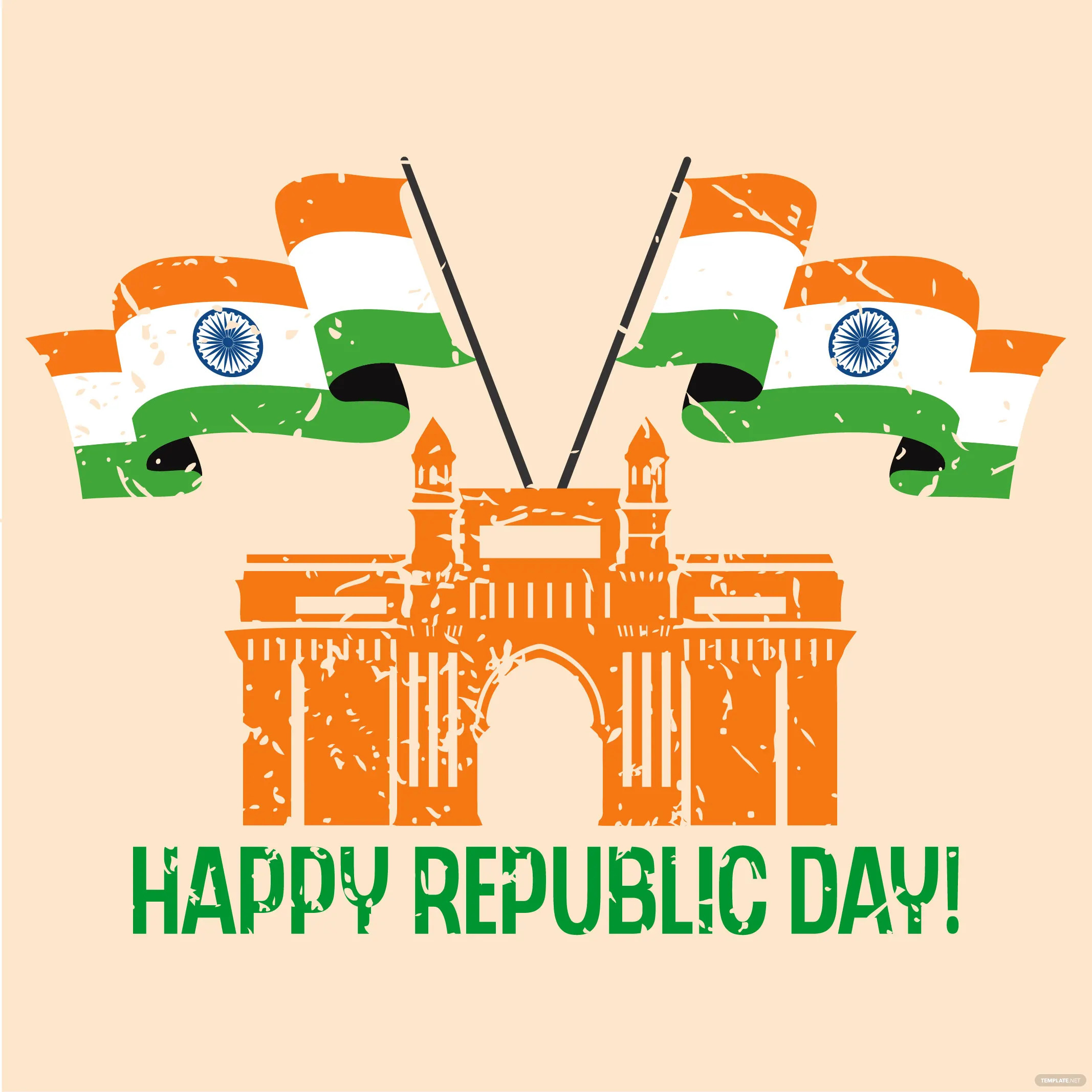 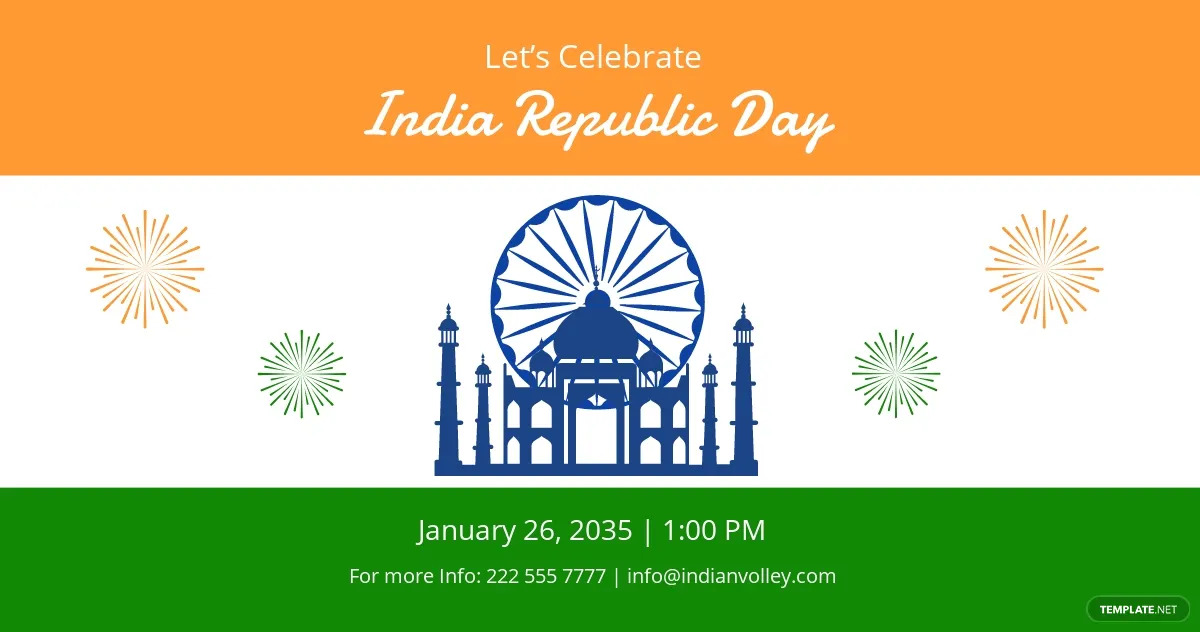 Why is Republic Day celebrated?

Republic Day is an important public holiday in India because it marks the anniversary of the establishment of the Constitution of India.

Who started Republic Day in India?

What is the theme of Indian Republic Day?

Every year, the Indian government comes up with a theme for India Republic Day; the theme of the tableau can range from education to cultural heritage to national patriotism.

Where is the flag hoisted on Republic Day?

The flag is hoisted by the President at the Red Fort on Independence Day and simultaneously on the Rajpath on Republic Day.

Why is the 26th of January celebrated as Republic Day?

The 26th of January was chosen as Republic Day because it was the date that the Indian National Congress or INC issued the Purna Swaraj or the Declaration of Indian Independence against the British Empire.

Who takes a salute on the occasion of Republic Day in India?

The President of India takes the salute every Indian Republic Day because he is the Commander-in-Chief of the Indian Armed Forces.

What is the conclusion of Republic Day?

What do people do on Republic Day?

Citizens of India take part in various activities across the country to celebrate Republic Day, these include flag hoisting ceremonies and parades organized by the Armed Forces and educational institutions.

What is the main importance of Republic Day?

The main importance of Indian Republic Day is the commemoration and celebration of an independent and autonomous India from British rule.

Where was the first celebration of Indian Republic Day held?

The first Indian Republic Day celebration was a modest ceremony that took place at the Irwin Amphitheater that is now known today as the Major Dhyan Chand National Stadium in New Delhi.

What is the story of Republic Day?

Indian Republic Day celebrates the country’s independence from British rule and the inception of the Constitution of India when on the 26th of January 1930, the INC (Indian National Congress) declared India’s independence from the British colonial power.

When is the 73rd Republic Day?

The year 2022 marked the 73rd anniversary of Republic Day; last 26 January 2022 was celebrated with extravagant parades including an aircraft show put on by the Indian Air Force.

Which award is given during the Republic Day parade?

The President of India bestows several awards and honors during Republic Day including the best tableau award, the Padma awards, Gallantry awards, and the Pradhan Mantri Rashtriya Bal Puraskar, among others.

How do you explain Indian Republic Day to a child?

Republic Day is a public holiday that is observed across the Indian subcontinent and marks the important date (26 January 1950) when the Constitution of India became the governing document that recognized the nation as an independent Republic government.

What is the slogan of Republic Day?

One of the popular slogans during the 73rd commemoration of India Republic Day was “One Nation, One Vision, and One Identity.”