Companies often conduct bidding for various benefits. It promotes healthy competition and ensures that the company will be getting only the best. When a certain company has made a decision from a pool of bidders, they will be informing this bidder through an awarding contract letter. You may also see Letter Samples.

The process of formally informing a bidder that they have been chosen as the contractor for a certain project or contract is called contract awarding. To formally inform this successful bidder, an awarding contract letter is made. This type of letter has the following elements:

1. Successful Tenderer: This is the individual, company, or entity that you have chosen to award a contract out of the pool of bidders. In the awarding contract letter, this is the receiver.

2. Contract Provider: This is the individual, company, or entity that confers the contract to the successful tenderer. This can be you as the writer and sender of the letter.

3. Contract Affirmation: This is the line or paragraph of the awarding contract letter that explicitly confirms the bidder that their company has been chosen to be the official contractor. It also contains the details regarding the bid.

4. Reason of Acceptance: This is the part of the letter that mentions why the tenderer has been chosen to be awarded with the contract. 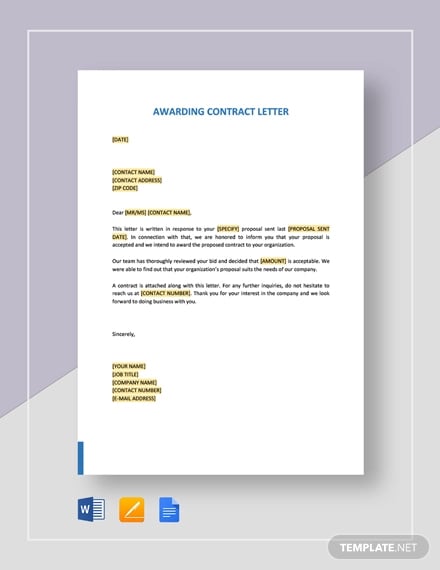 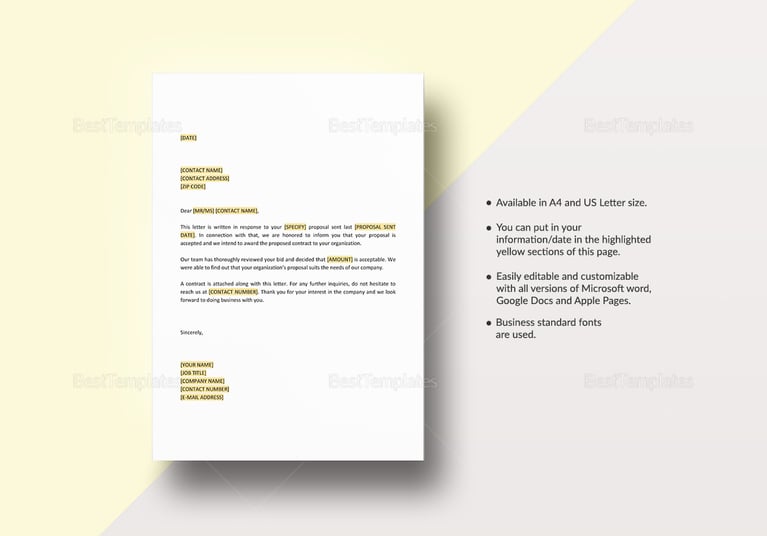 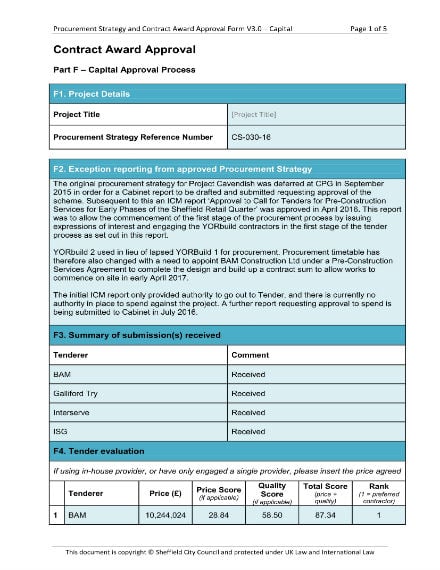 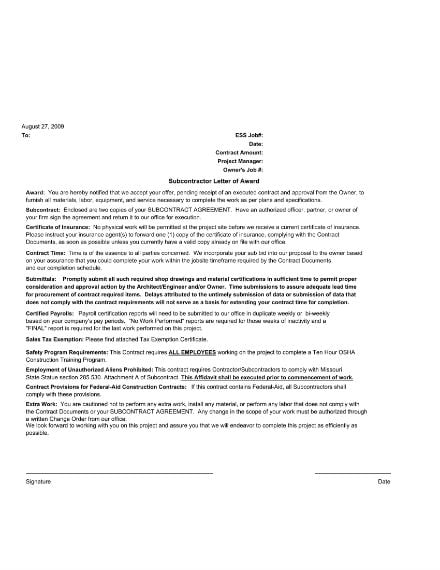 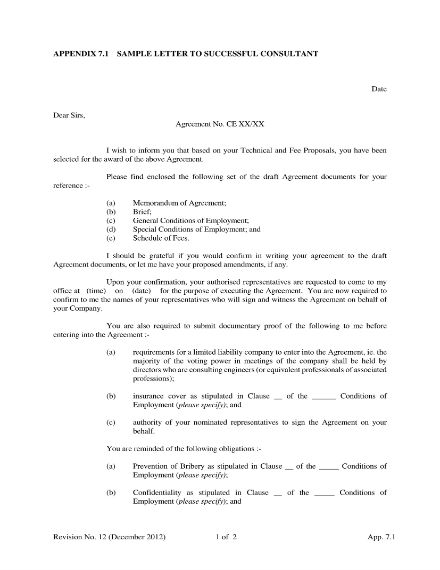 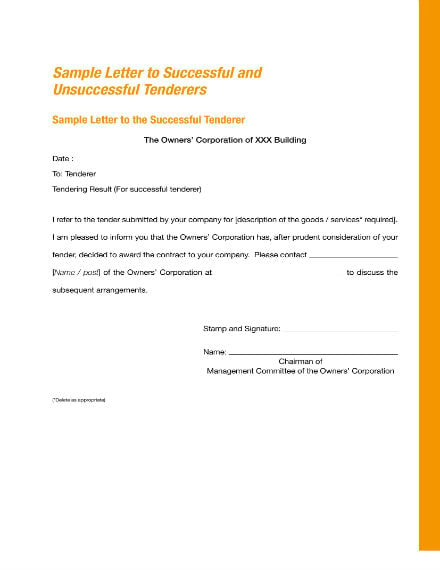 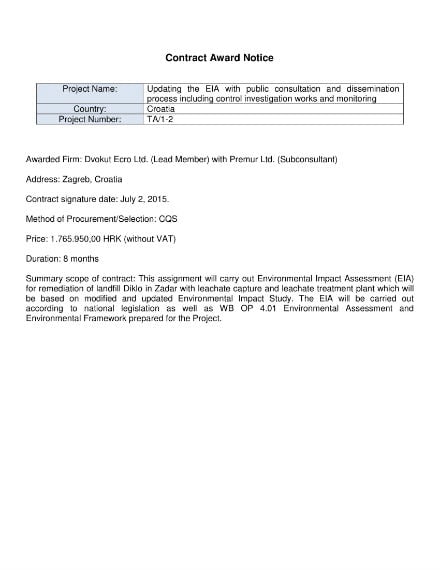 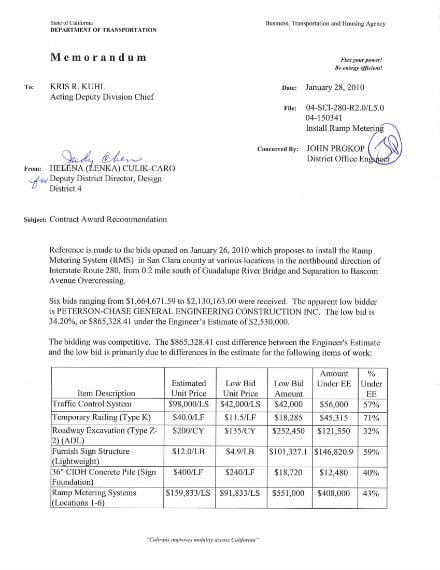 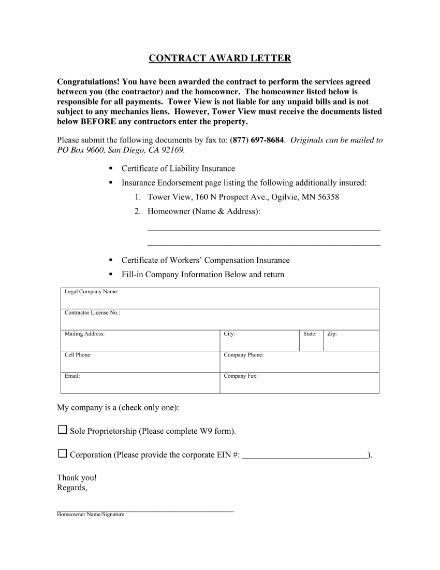 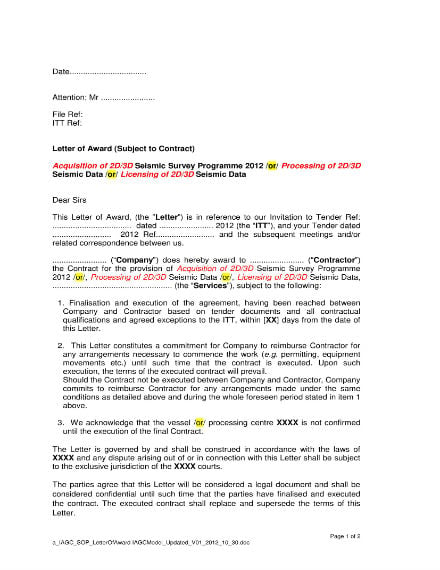 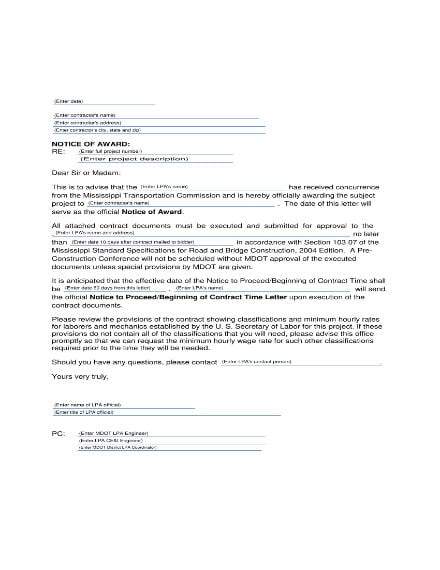 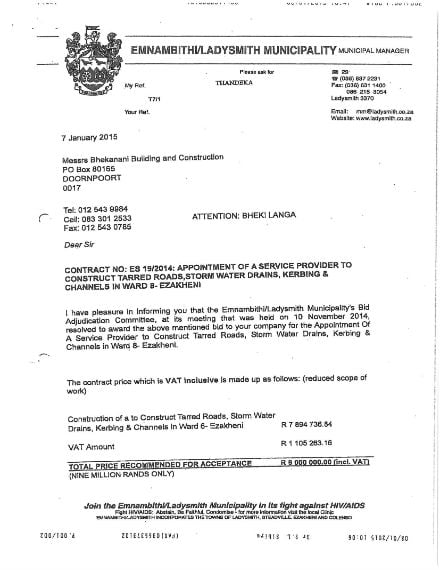 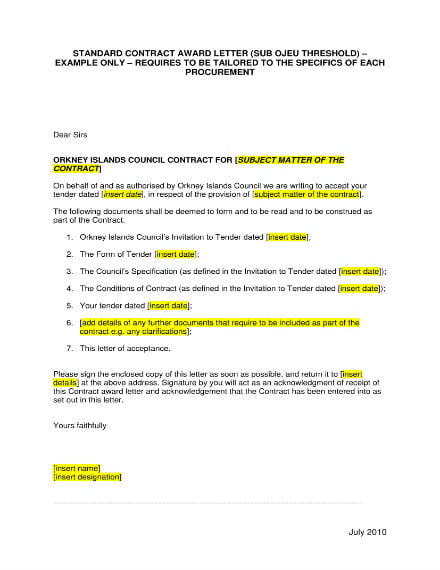 2. Writing the content of the letter: The body of the letter is where you will provide the details as well as the confirmation that your receiver has indeed been chosen to be the partner for the contract.

3. Proofread: Read your letter again and cite for errors in grammar and inconsistencies from the business letter format. Make sure that you have clearly expressed your message and you got all the details correct. If you already have a contract then don’t forget to attach the contract on your letter. Spending mere minutes of reviewing your letter will spare you from doing major re-dos and worries if ever it gets sent.

Awarding contract letters are classified according to the method used in choosing the winner of a bid. There are four most common methods, and they are:

How long should I wait before sending out my awarding contract letter to the successful bidder?

As long as you think you have made a carefully-weighted decision on the bidder that you will be entering a contract with, then it is safe to send out a letter informing them that they are the chosen ones. Usually, companies take around 90 days to take in proposals and finalize their decision, so you might also want to observe that kind of length in deliberation.

Sending a letter to the bidders that you have not chosen for the contract is not really recommended as you want to keep them open for other opportunities in your company. In the instances where you and your chosen bidder will suddenly not agree with the contract, then you still got the other bidders welcoming the contract offer from your hands. Only send a letter when the contract has been signed by you and your chosen contractor, as there is already a sense of finality in this stage.

Take note that a contract awarding letter is not the contract itself, so it is not binding and the receiving party can refuse the offer stated in the letter. However, once both parties have signed the contract, they will both be legally bound and backing out entails a complicated and expensive legal service. When choosing your contractor, make sure that you have weighed and evaluated the different factors and so as not to take a hard toll on your company in the end.