Sank your teeth into a company’s development and now need to recline on your backrest? The least you would want is the company’s acknowledgment for whom you have to spend your blood and sweat for years. Sample resignation letters give an idea on how to announce the resignation of prominent members of any organization or board and thank them for their services.

5 Steps to Write an Announcement of Resignation Letter

Start with the heading announcing the name of the company, the resigning officer’s designation preferably in bold letters so that the4 other employees immediately know what it is about.

Step 3: Mention Who Will Take Charge of His Duty

This is important for the other employees to know who will take up the emptied position and with whom they should coordinate with henceforth.

Step 4: Do Not Forget to Thank

Thank the resigning officer for his service and contribution to the company. Let the goodbyes be memorable and full of gratitude.

Step 5: Signature Is a Must

Since you have taken up the responsibility to make the announcement on behalf of the company, make sure you let the others know that and your authority in making such announcements. 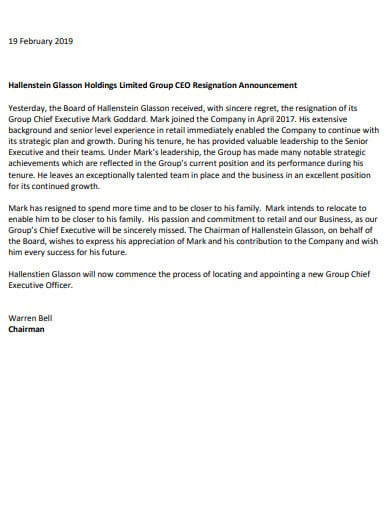 The CEO is the head of the company. The announcement has to be as big as his position. Extra care should be taken in writing this formal resignation letter so that the entire company knows about his withdrawal of service and at the same time the company can thank him and wish him luck for his future endeavours. These templates can be taken help from to know what exactly you should write in CEO resignation announcements. 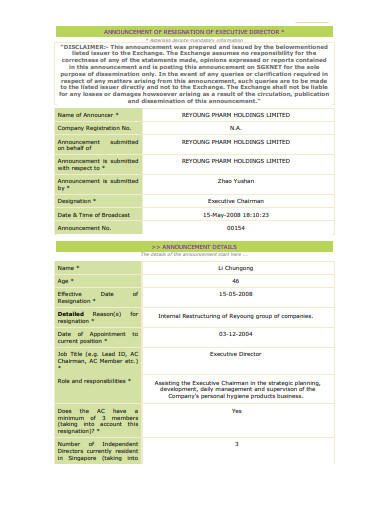 Announcing the Resignation of the Executive director on the behalf of the company is a bit complicated since you need to detail the effective date of his or her resignation, the date of the new joinee’s appointment, the registration number of the company. You can also take assistance of these sample resignation letters and select the template for Executive Director resignation and fill up the details of the company.

3. Board of Directors Resignation Announcement 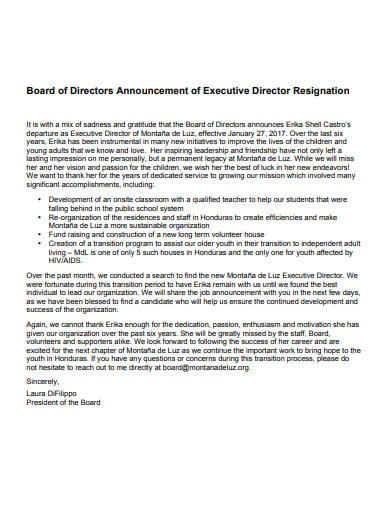 The entire Board of Directors might choose to announce the resignation of one of the prominent employees. This is done through a announcement letter template thanking the employee personally for their services followed by the updated information on future occupation of that position. 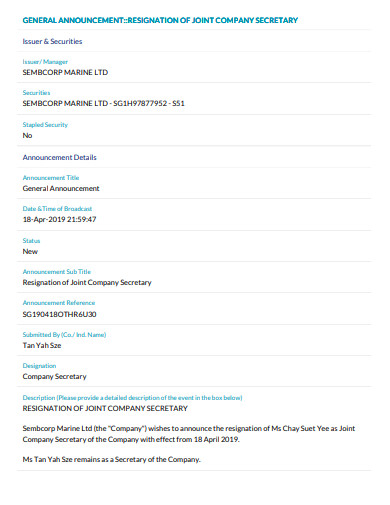 Professional resignation letter templates all have a similar basic format. This includes options for the organisation’s name, resignee’s name and designation, announcing officer(s) name and designation and the date of effect and some other personal details. The rest of the letter format remains same- thanking the employee, the duration of their service etc. 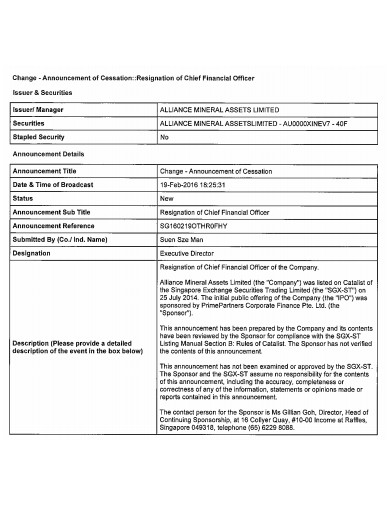 A financial Officer’s resignation announcement is quite similar to executive director’s resignation. Details like the issued authority’s name, stapled security, new registration number and employee name need to be filled up in the resignation letter samples already ceated by us. 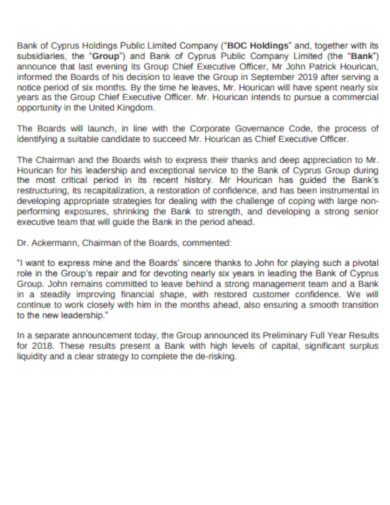 Executive officer resignation template is a formal piece of document announcing that the executive officer has decided to resign.It comprises the date of his resignation, the duration of his service and thanking him for it. This has to be followed by the announcing officer’s name and signature. 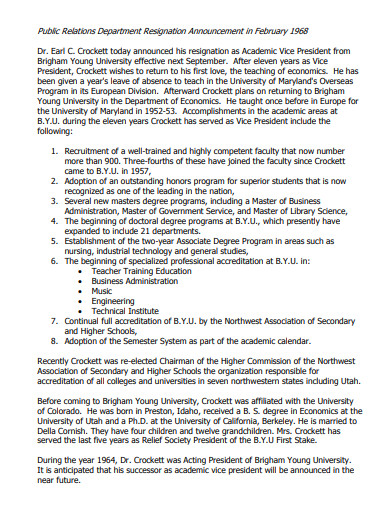 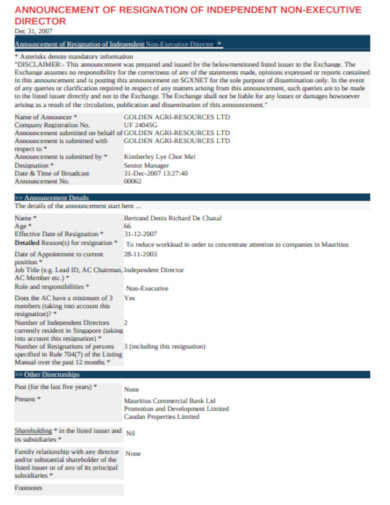 A non-executive director resignation announcement includes the brief detailing of the resigning officer’s name, his resignation ID, formal reason, date of effect followed by a separate section dedicated to the new non-executive officer, his date of joining and other details as required by the company. 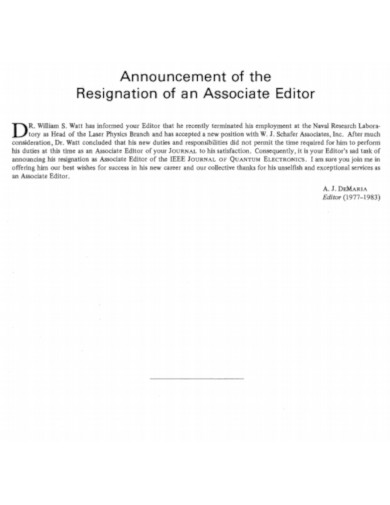 Associate editor is leaving? Draft a resignation announcement quickly so that both him and the company can acknowledge each other with fond memories later. These free resignation letters by us are also available that give you an idea on how to do it. 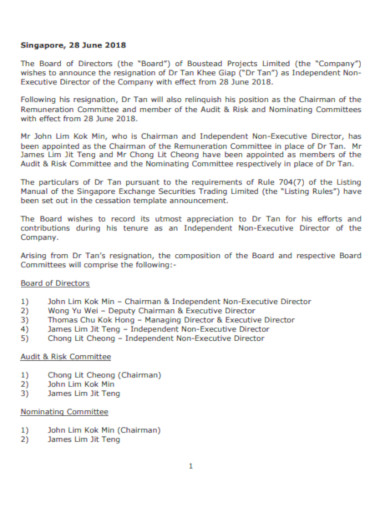 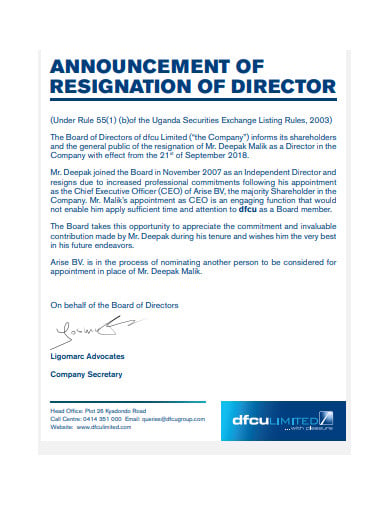 Director resignation letters need to be extremely formal and polite since it announces the departure of the head of the company. Another important aspect of this lettter is the announcement of new appointment that need to be taken care of. Download these pre-drafted templates by us and get going. 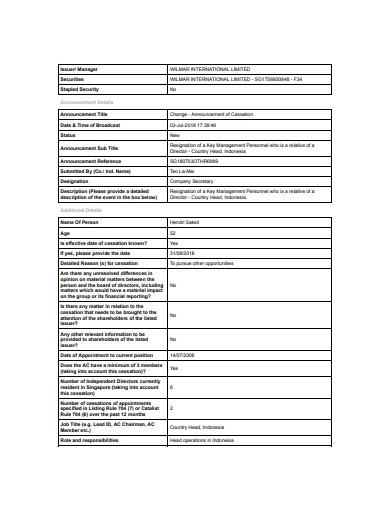 Format of resignation letters keep varying depending upon the organisation and status of the resigning employee. Some basic format includes the name of the employee, his resignation ID, his stapled money details, his date of resignation, officer to take up charge etc,. 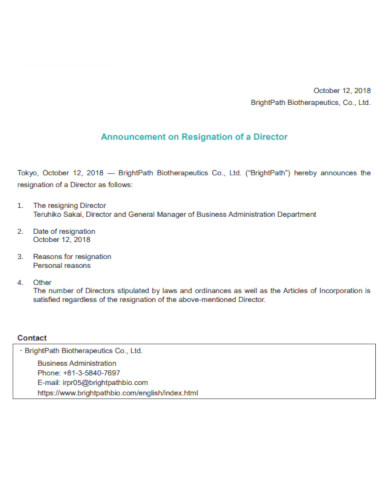 Samples of resignation announcents are now available for free. You can select resignation letter sample from the many, prepared by us according to your choice and follow the form and content too and get a announcement letter drafted easily. 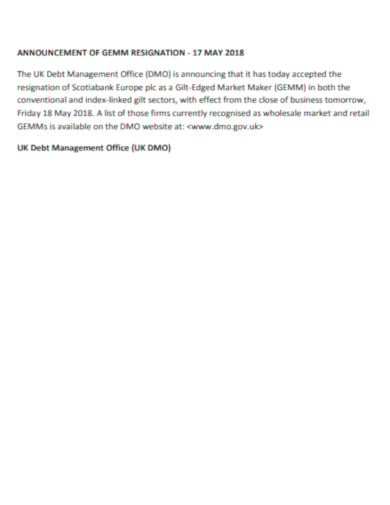 Free formal resignation letter templates are now created by us. All you need to choose is, who you are writing the letter for and select the template. Gather the necessary information and fill it up to draft the right letter of announcement. 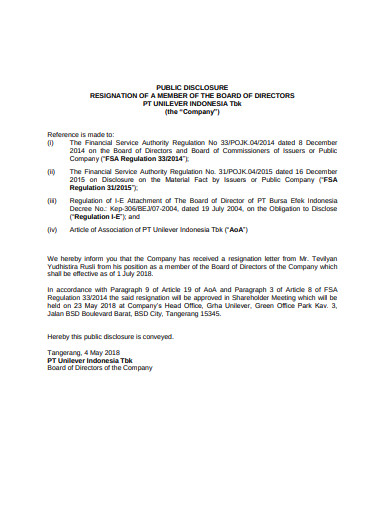 Free resignation letter sample templates are now not only downloadable but also printable,. Select and fill up and get your announcement of resignation letter prinnted and ready incase your letter needs to be handed out and not forwarded via email.

16. Announcement of Resignation Template in DOC 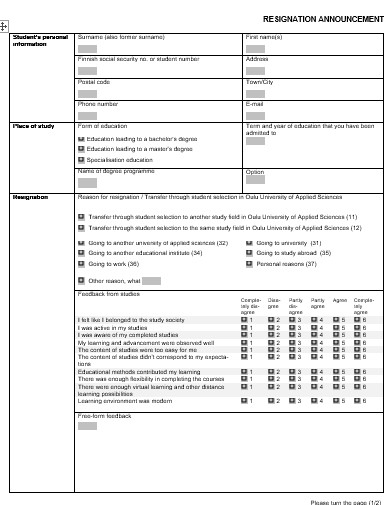