As one individual reaches adulthood or graduates college, that individual is expected to apply for a job sooner or later. This is expected from one because of many reasons. Reasons like to support the family, support himself/herself, work in the profession that he/she studied for years, or deposit a little bit of his/her income to his/her bank account for future use. But sometimes when one finds a job, the pay is not always good, especially in the first few months. That is why people who find themselves in such a situation tend to either apply for another job that pays well or opt for two jobs at the same time. Working for a company and having another job outside of it is called outside employment.

This article will introduce you the full definition of outside employment and some of its general policies that companies around the world use. Along with that, we will also be showing you templates of its policy and forms to give you an idea of what it is composed of. By the end of this article, you will also be able to read the advantages and disadvantages of having two or more jobs at the same time. 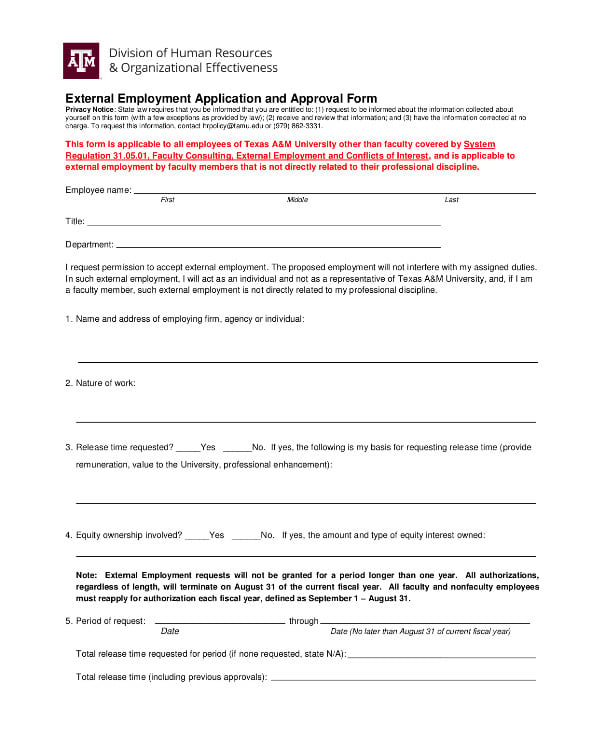 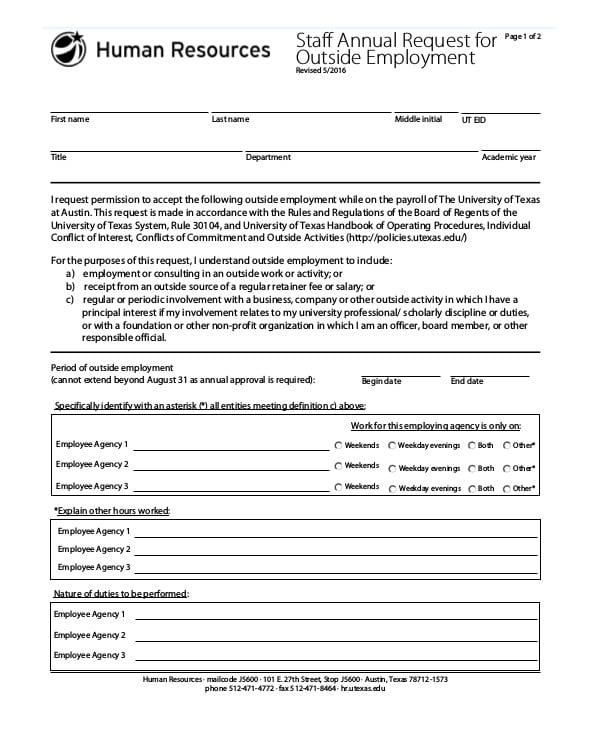 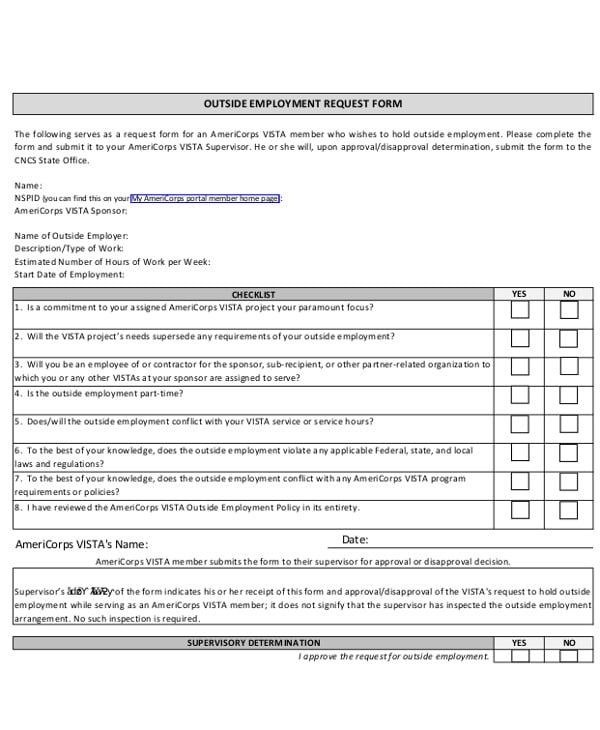 What is Outside Employment?

According to different companies who have this kind of policy, outside employment is basically where an individual works in a different company, while at the same time, works for his first company. It is also when one is self-employed or when someone receives wages and compensation from another employer where one renders service. Different companies have different methods when it comes to allowing employees to have another job outside of the company while working on their own. That can be found in their outside employment policy. The policy is made up of these components:

1. Purpose. Basically, in this part of the policy, it states why there is this kind of policy. Most often, it would explain that it is for the benefit of the employees to understand when one applies for outside employment, the second job should not affect his/her performance with the current company. In other words, it should not have a conflict of interest for the company. You may also like verification of employment forms.

2. Scope. This determines where the policy applies to in the company because some might not be granted the request.

3. Procedures. This is where it would state what necessary procedures are to be followed if one would want to apply for outside employment. The procedure should be clear and concise as to any other policy within a company to avoid confusion. It will usually require the individual to ask permission from the supervisor or to fill up an outside employment form to make it more formal.

Outside Employment Request Form to Engage 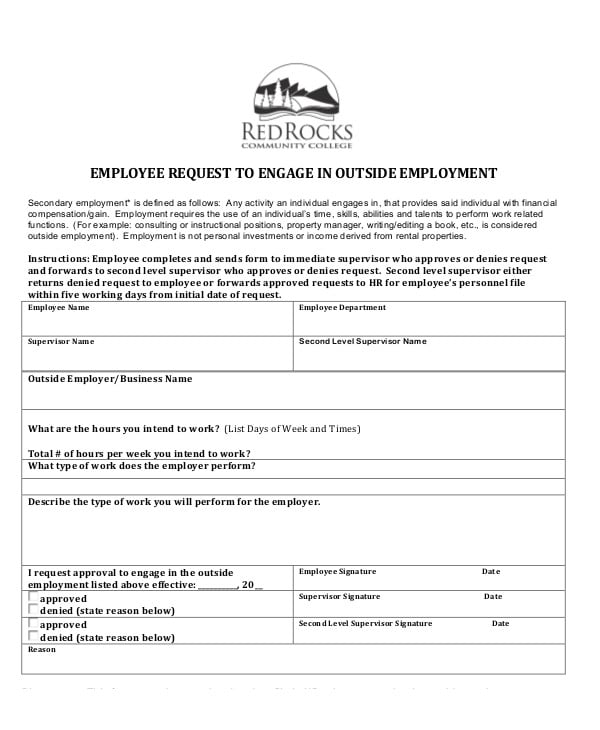 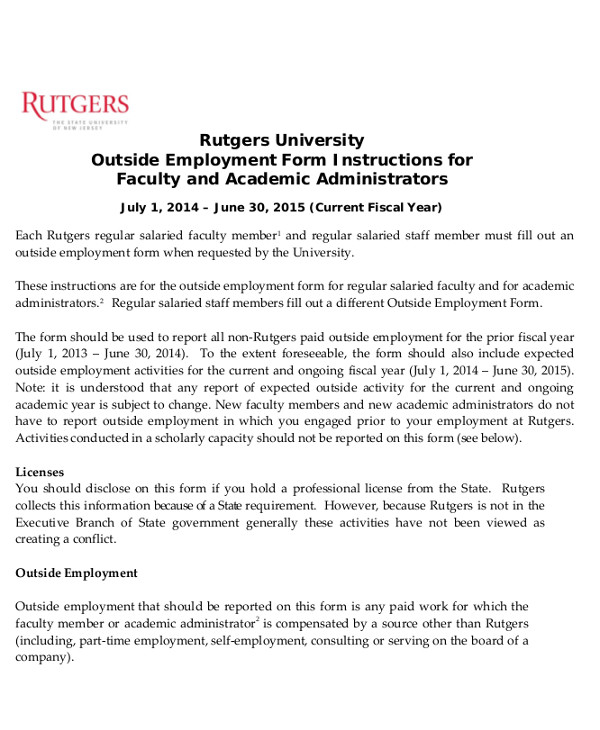 Parts of an Outside Employment Form

1. Basic Information – This generally contains your name, the department in which you are in, your job position, and the date you filed for this request.

2. Employer Information – This is where you write the name of the employer or company you plan to also work with if ever the request is granted by HR or to anyone that the company has deemed responsible for such requests. You may also see HR application forms.

3. Job Title – This is where you state what kind of position you’re applying or taking in the other company.

4. Location – This simply means the complete address of where your other employer or firm is located.

5. Work Hours – In this part of the form, you have to state the hours of service you will render for that other firm.

6. Months – You have to put how many months you are planning to have this outside employment.

7. Approval – This part is responsible for the person in charge to decide if he or she will let you work for another company at the same time with the current one. The end of this part of the form is where the one in charge will affix his or her signature whether the request is approved or not. You may also like HR complaint forms.

It is best that the one requesting should make sure his/her request is reasonable in order for it to be approved immediately. But, this does not mean that one should falsely state why he/she needs also work in that other company to avoid penalties that might cost him/her not only his/her job but also his/her future is looking for another. Having a bad record by other companies is a major setback and can leave a bad impression for the person as an employee. You may also see employment verification forms templates.

Staff and Administrative Outside Employment Form 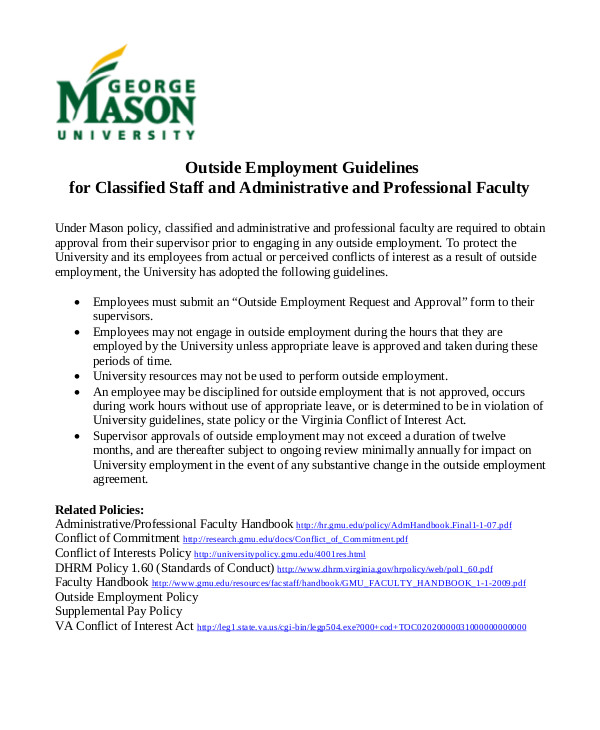 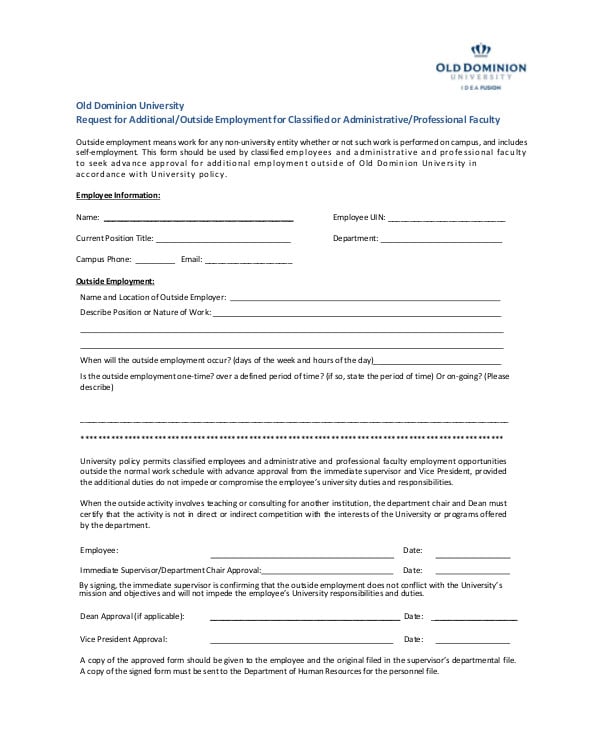 Advantages and Disadvantages of Working Two Jobs at the Same Time

No matter how good some things might seem or how bad things are, there will always be an equal and opposite reaction. If one involves himself/herself in working two jobs at the same time, it has its advantages and disadvantages. How heavy the impact between the two of those effects depends on the perception of the individual. In this part of the article, we will be giving you some of the pros and cons of working two jobs at the same time. This would also be useful if you need to reevaluate yourself someday if you have to face the dilemma of choosing to work two jobs at the same time or not. These are the pros and cons. You may also see employee correction forms. 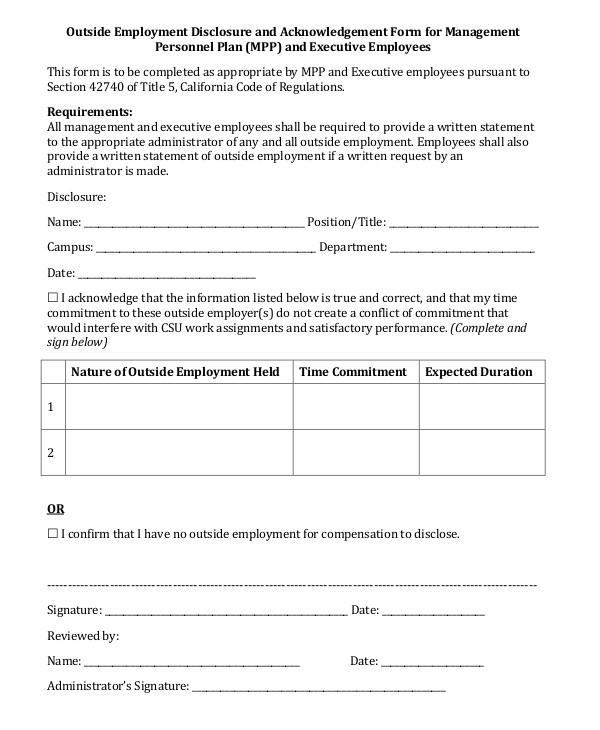 External and Outside Employment Approval Form 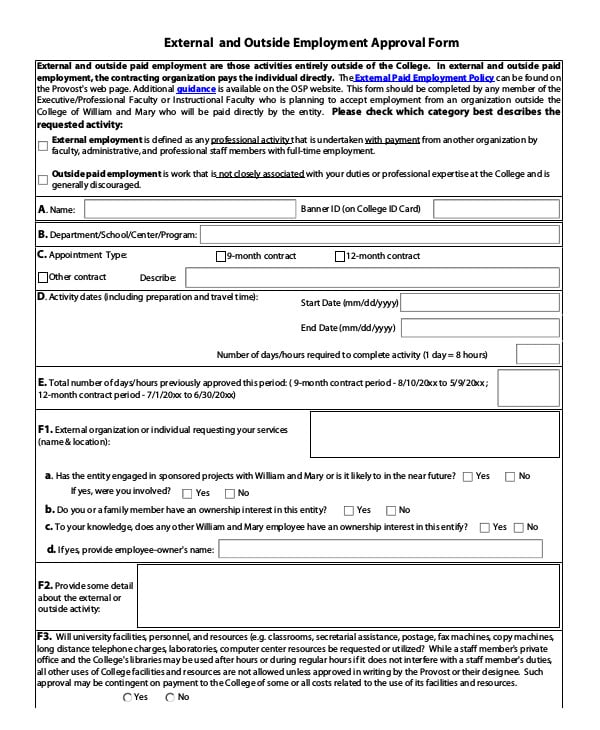 The best way to avoid the disadvantages of having two jobs at the same time is to reevaluate your choices. You should be able to ask yourself if two tasks are something you can handle. You also have to consider the heaviness both jobs would give you and ask yourself if you have the power to carry that every day after you wake up in the morning and before you sleep at night. Ask yourself if having two jobs will lead you to positive growth in the future and that your efforts will not go to waste. Late realizations can make one regret. In the end, it is not what people regret doing, but regret the things they could have done, but didn’t. You may also see employment verification forms.