Contracts usually have rules, where there can be collaborations and communications that are effective for many people to make the purpose of it achievable. Their personal data can be shared with others, in order to make the information circulates to people that will only work for the contract is by a simple contractor non-compete agreement. 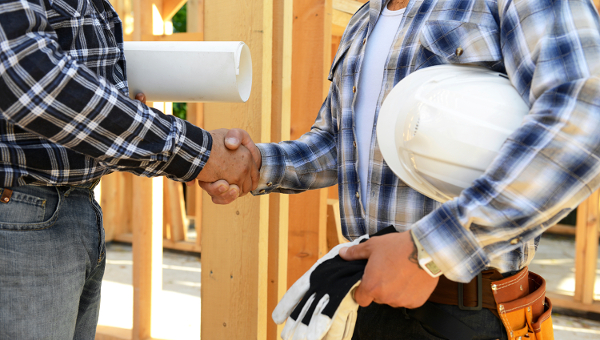 These necessitate anyone in the contract sample to not let any person know the personal information they have learned during and after their contract is completed in their company or employer. This way, you can secure the information only to your organization. Agreement templates that are available online can be of great help to you in making the right agreement needed for your business. 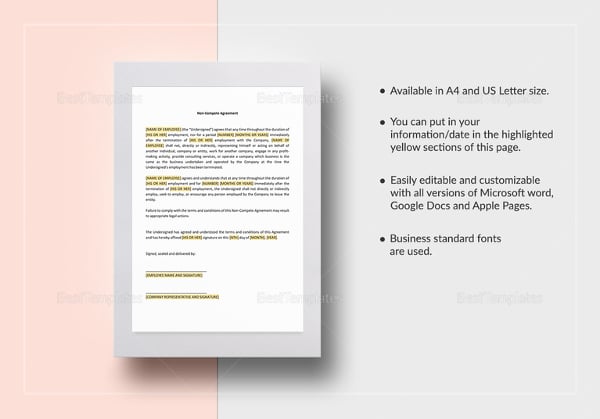 Protect your business with the help of this non-compete agreement template, that you can use with ease. Just simply download the template, edit and customize to meet your needs and requirements. Check private agreement templates for more. It will keep you updated on what is commonly used to have your information be as private as it can be to avoid any competition to grow. Try it out now! 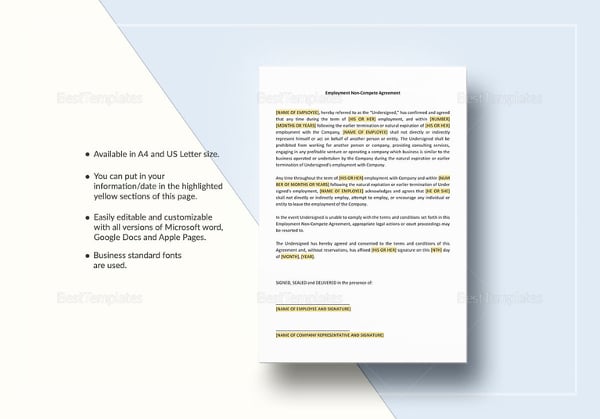 Companies are always hiring personnel that will work for them for a long time, there are also times when there are employees that will work for others in order to have a higher salary and position. This sample agreement template mentioned above will prevent any person from rendering their knowledge from other companies that can hurt the income of their previous employer. 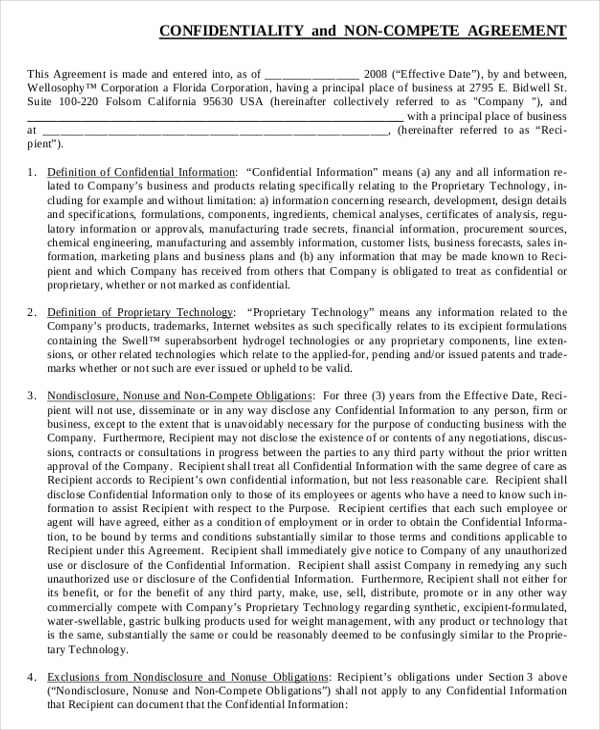 The form where the people that will work for you can sign immediately before they start working in your company so they will know the things that they must tell publicly and the information they must keep for themselves alone. A non-compete agreement is usually signed between two parties and it has to be a very confidential one. The above template is one such agreement that you can use to make the best non-compete agreement you need. 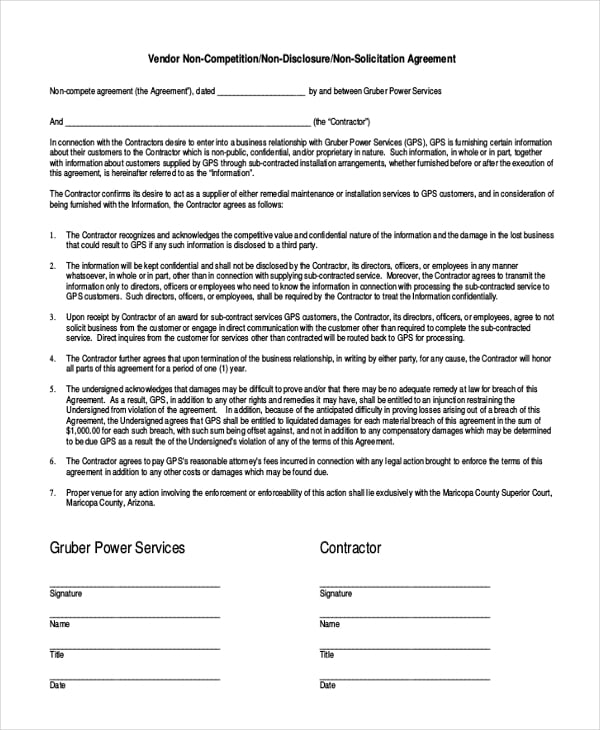 Any kinds of markets have their own restrictions when it comes to buying and selling good whenever required. With this agreement, there will be the rule where the vendor can neither have the same products nor create the products they are selling and maintain the status quo as they have before. A vendor agreement is signed between a company or an individual who is interested in selling his/her products and services to another individual/company with some terms and conditions in mind. 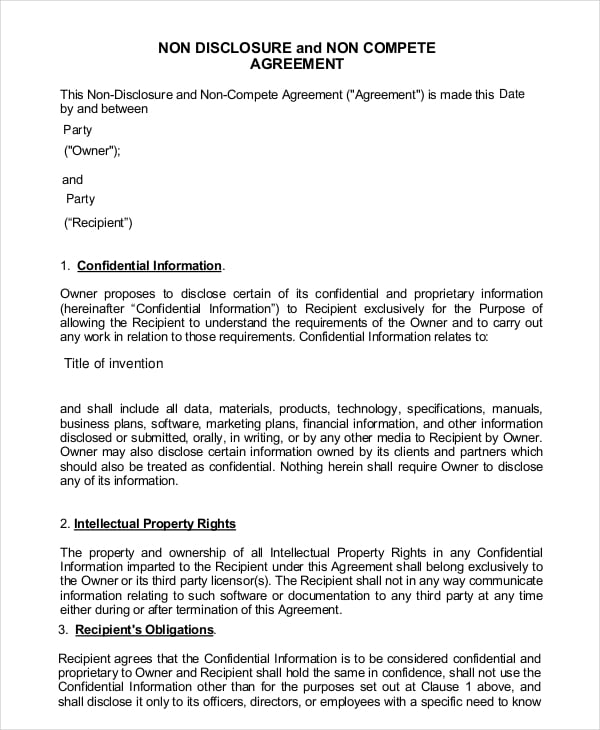 Its contents are not that primarily all-encompassing but only focuses on the parts that must be followed to have a directive in inhibiting any opposition and imitation of the products once released.

Create a Non-Compete Agreement in 5 Steps:

Step 1: Scope of the Agreement

The next step would be to make sure that you have added all the needed details of the clauses and prohibitions one has during the time of the agreement. Add the indemnity clause, penalties of violation of the agreement, the non-compete clause for which you are writing the agreement in the first place, etc. in detail. This way, all those involved in the agreement know what they have to do, as these act as a guide to the roles and responsibilities of each.

Mention the time period for which the contract is valid. This means that you need to add the number of months, days or year the agreement is active for and what are the possible clauses for termination of it a little early. Mention the different zones with any degree of restriction for the contractor. This means that as long as he/she is working for your company, he/she cannot work for anyone else unless specified in the agreement.

The last and final step in making an agreement is to review it before you get it signed. You might have missed the mistakes in it, so always give it a read so that you can make all the changes needed. Once you make the necessary changes in the agreement, the next thing for you to do would be to get it signed. Check the contractor confidentiality agreement for more. Since once the agreement is signed, it is considered a legal document. Make sure you give a copy to all those involved in the agreement.

Agreement by Contractor to Non-Compete 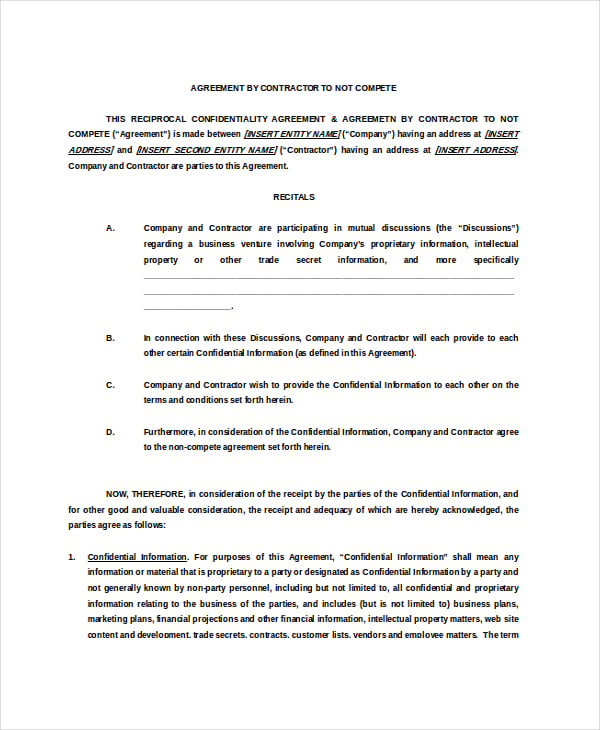 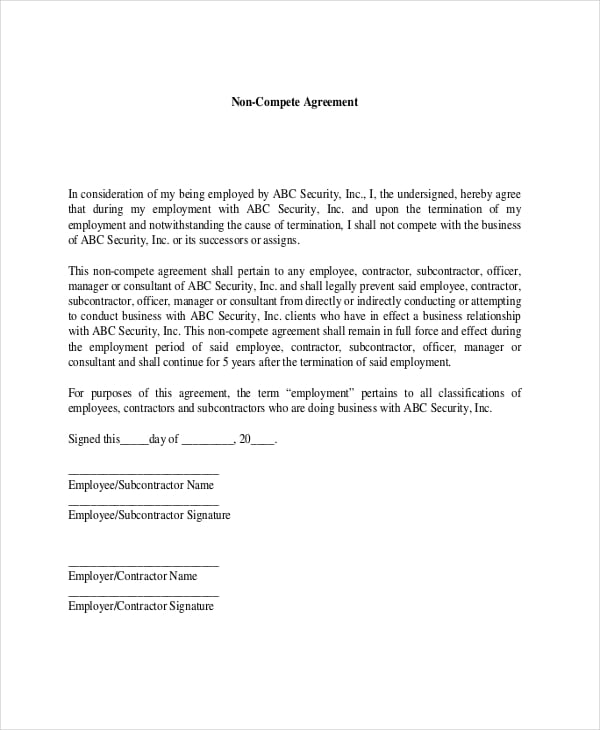 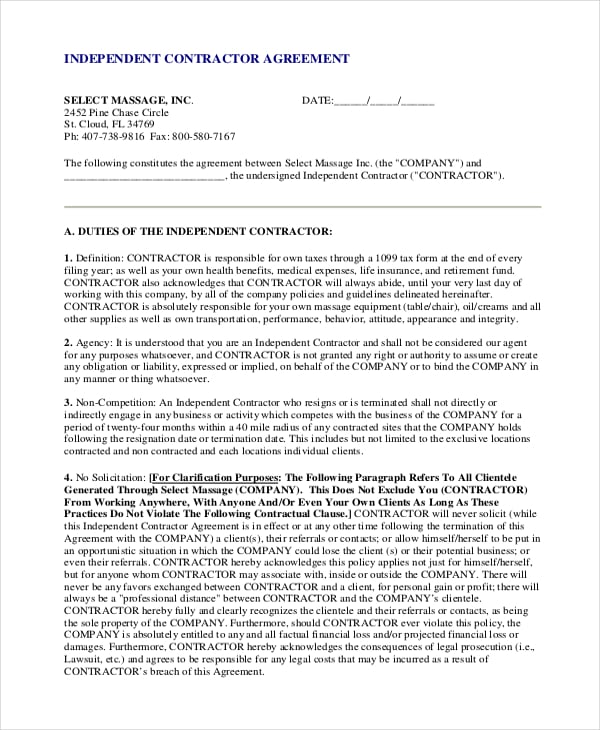 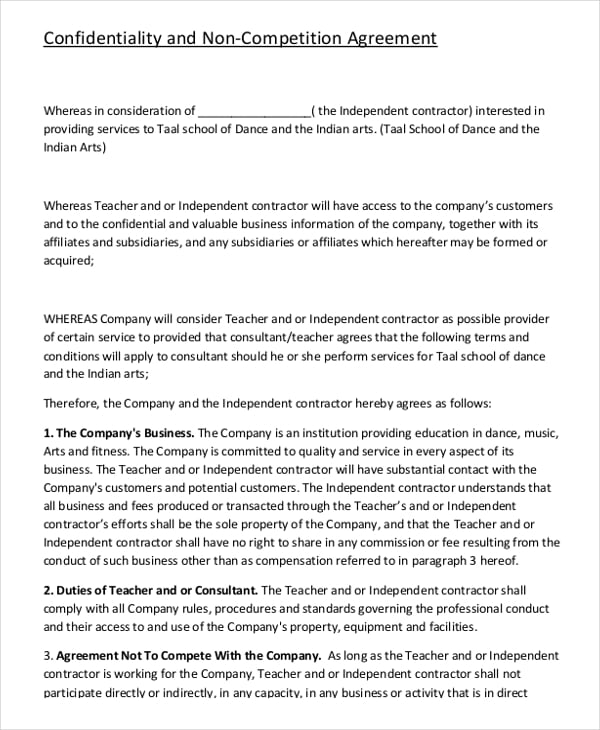 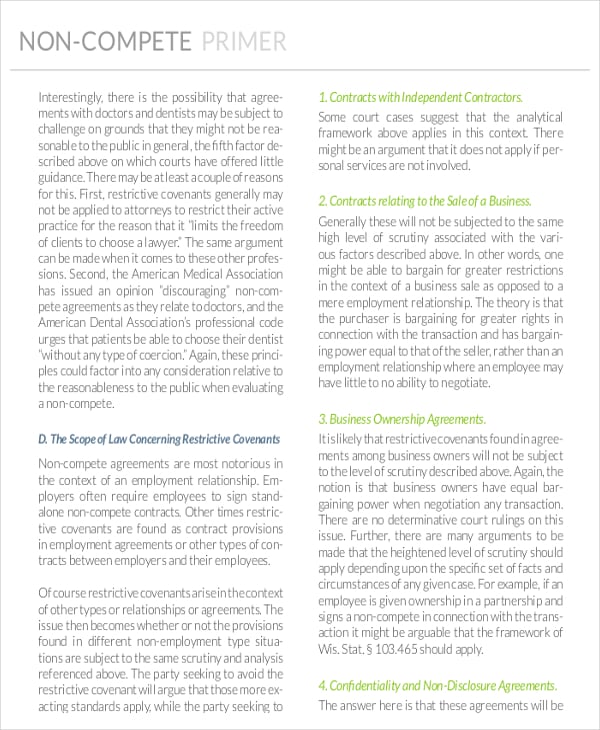 Employers must be the spearhead that will make any of their employees follow the companies rule regarding the privacy of their company’s information. Check employee non-compete agreement templates for more. Whatever it is that they have learned, they should prioritize not to talk this information to other people without the permission of their employers.

To take better use of this document, have it validated by a lawyer after it is completed so it has a legal reference. The agreement that will be made must be based on the contract that was signed by the concerned parties. They must all cooperate in forming the non-compete agreement and get it validated by signing the document whenever completed. All the copies must be present as they act as references for the future. Attorney non-compete agreement templates can be of great help to you in case you are a lawyer and need to make such agreements for your clients.

You can take this in a sample format where you can base your own agreement document when you will make your own. On the other hand, if you want to have it done by skilled writers then give us your instructions so you can assure that it has a higher efficiency rate compared to others.

View All Contractor Templates
Available in