How to Make an Apprenticeship Contract Agreement

There are those people who haven’t exactly met the qualifications of a particular profession they want but would like to learn the skills and knowledge it takes to take on the particular profession in the future. These people are what you would call apprentices and many employers hire them every day. You may also see contract agreement. 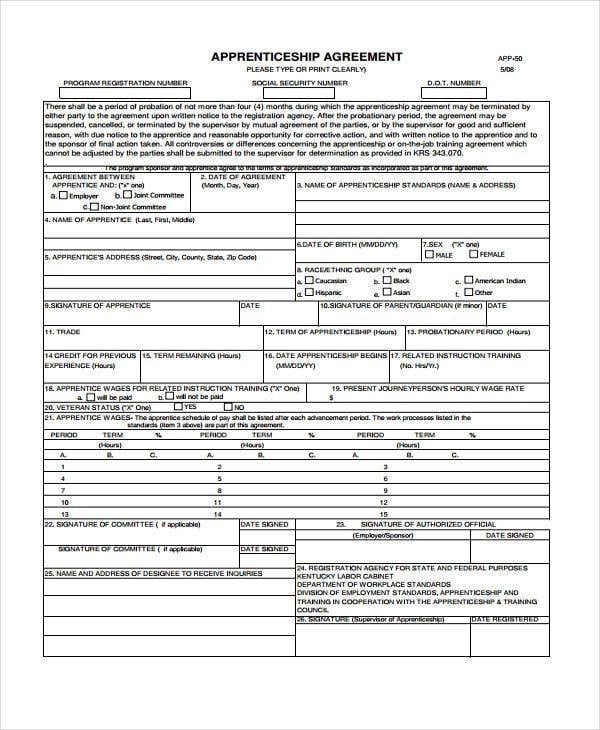 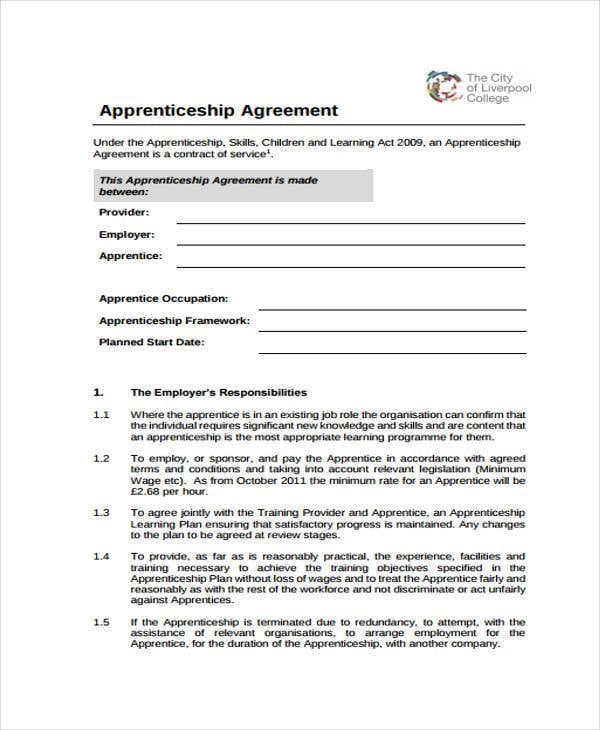 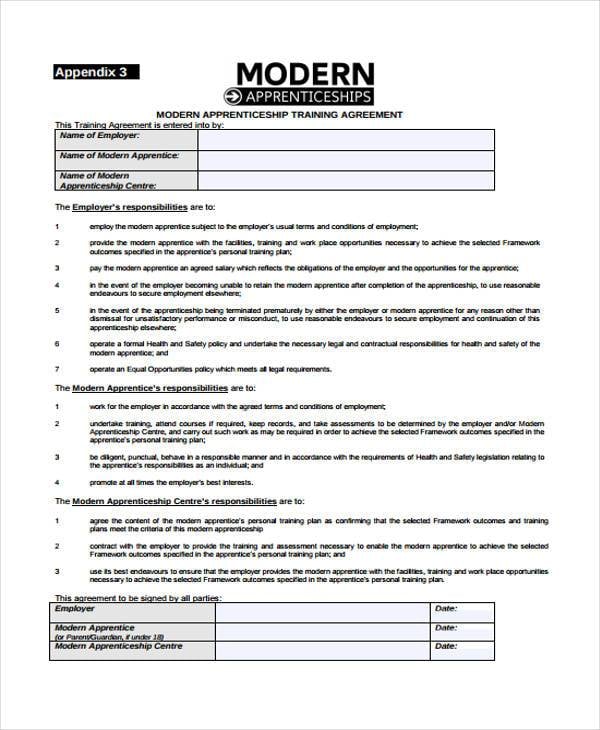 However, before any kind of apprentice can be taken, there has to be an understanding between both the employer and the apprentice in regards to what he/she is going to learn and the duties and responsibilities that the apprentice will carry out. Which is the reason why there are apprenticeship agreement forms and this article is going to focus on how you are going to create one. 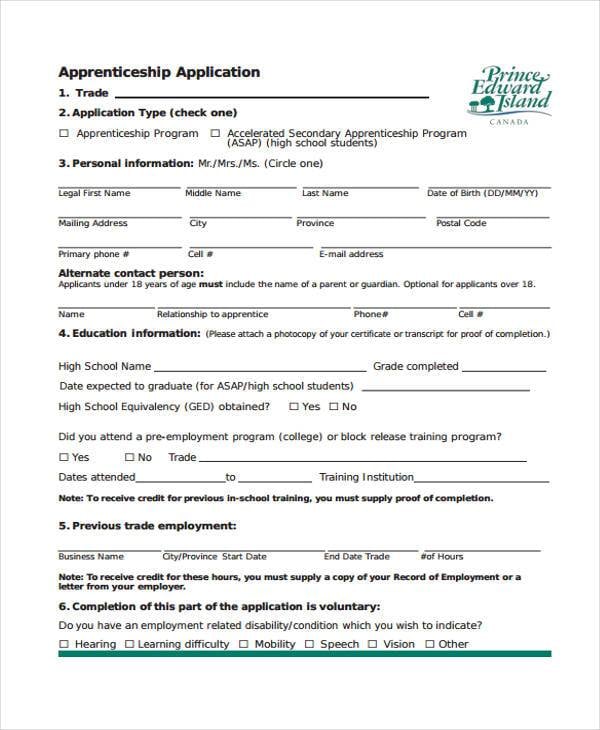 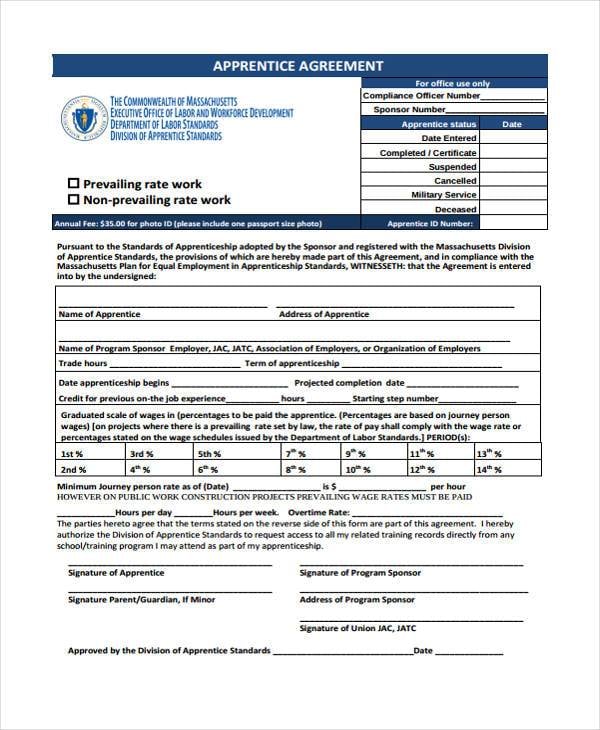 How to Make an Apprenticeship Contract Agreement

1. Have the Apprentice Place in His/Her Basic Information

This to ensure that the person who will be taking up the apprenticeship is exactly who this person states that he/she is. This is not just for formality purposes, it’s required that they provide the information to ensure the validation that this person was able to complete his/her apprenticeship. So, you’re going to have to make sure that the apprentice places his/her complete name on the document, as well as other basic information such as his/her contact details and more. Be sure that the apprentice checks that there are no errors in this section as even one error on the name might just be enough to nullify the contract. You may also like contract templates.

2. State the Purpose of the Apprenticeship

The purpose of every apprenticeship will depend on the type of profession that the apprentice will be trying to learn about. So let’s say that one person wishes to take an apprenticeship in stock sales. So obviously the purpose of this program is so that the apprentice will be able to learn the basics on how one will go about in selling stocks, as well as being able to meet with other qualifications related to the profession that has been designed by the employer. You may also like sample contract agreements.

3. State the Duration in which the Apprentice will be Employed

This is where the employer talks about the apprentice’s working condition. Yet again, the conditions of the job will depend on the type of profession the apprentice wishes to pursue. So, this should provide information such as the location as to where the apprenticeship will take place, the facilities that will be used, the different equipment that the employee will have to work with, the different tasks and activities that will take place and much more. You may also see sample agreement templates.

If there are company policies that ensure that employees know what they should and should not do, then there are also rules that the employers create that their apprentices will have to follow. If you’re going to be creating these rules and regulations, then you need to be as strict as possible when enforcing them as you want your apprentice to learn that following rules are always essential in every profession. So when you’re making your agreement form, here are the rules that you are going to have to place:

Even if it’s just an apprenticeship program, there’s always the possibility of incidents and accidents occurring that could very well place the lives of the apprentice, employer, or anyone else who may be involved in immediate danger. So it’s important that you point out that the apprentice must do whatever is possible to prevent these accidents or incidents from happening by remembering what was taught during the induction and the training part of the program (hopefully you were able to do this as not doing so will reflect very poorly on your end). You may also see vendor agreement templates.

7. The Disciplinary Actions that will be Taken

It’s always important to come up with an apprenticeship contract agreement if you’re going to have an apprentice under your wings. So, be sure to follow the steps above to help you in creating an effective one.

If you would like to learn more about how to create an agreement contract for an apprentice or anything that’s related to this particular topic, then all you have to do is go through our site, find the articles that contain the information that you need, and utilize the information that you are able to find to help you out. You may also see business agreement templates.