Sophie Kinsella once said this about secrets, “This is what happens. You tell your friends your most personal secrets, and they use them against you.”. That simple statement in itself, just shows how powerful a secret can be and how people are willing to just use that ever so easily by telling others. A personal secret’s value grows over a span of time especially if it is so precious and valuable. Secrets are secrets for a reason and should serve its purpose. That purpose is to be kept and not get it spread unless the owner of the secret is okay of the secret being shared. You may also see agreement samples. 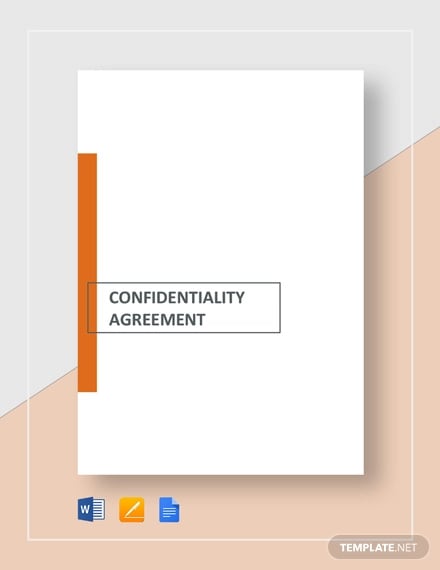 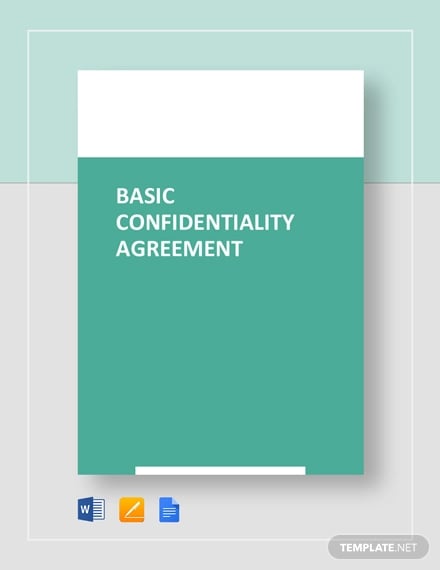 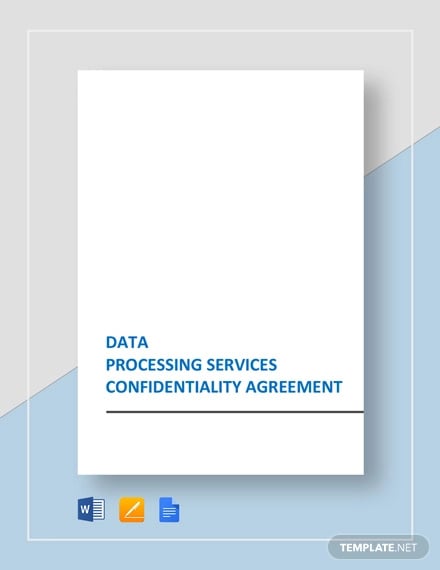 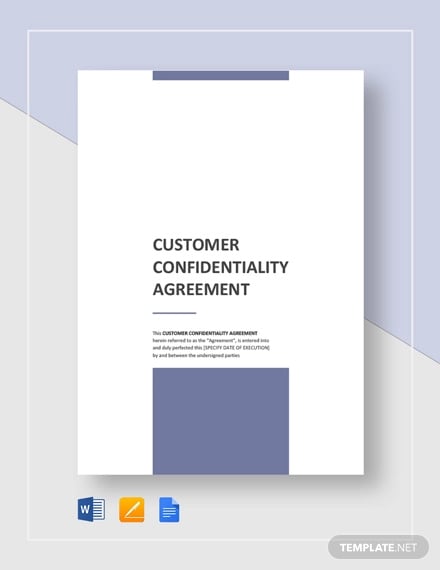 Secrets contain information that has the ability to surprise or hurt someone. But even if some secrets can make someone happy, it is still not right to go around and spread them. These things are a secret for a reason but some people just do not respect that. The disclosure of secrets can often ruin friendships and can be embarrassing to the one who owns the secret. You may also see sample data confidentiality agreements. 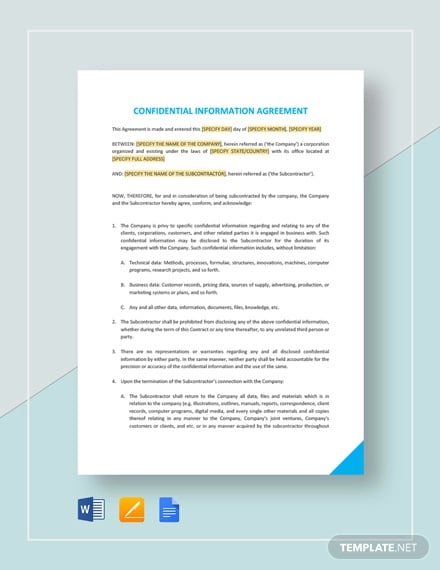 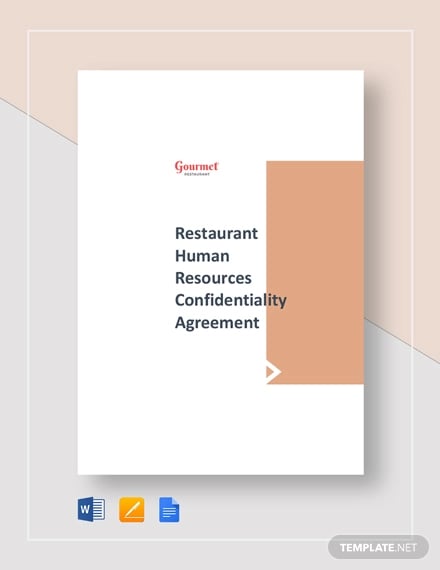 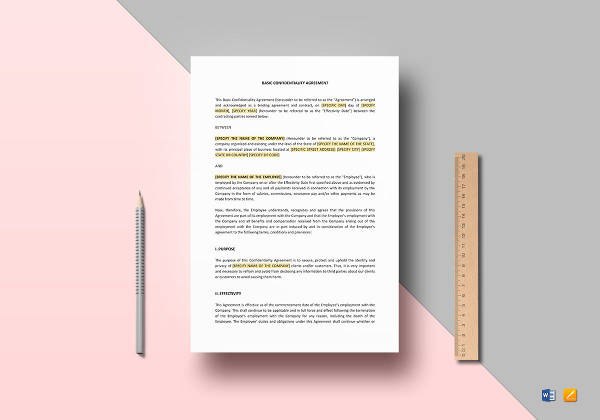 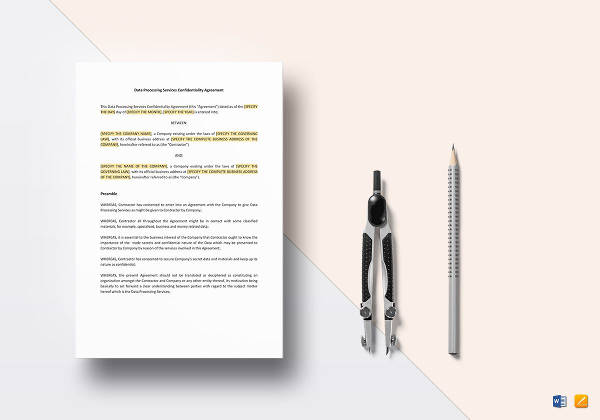 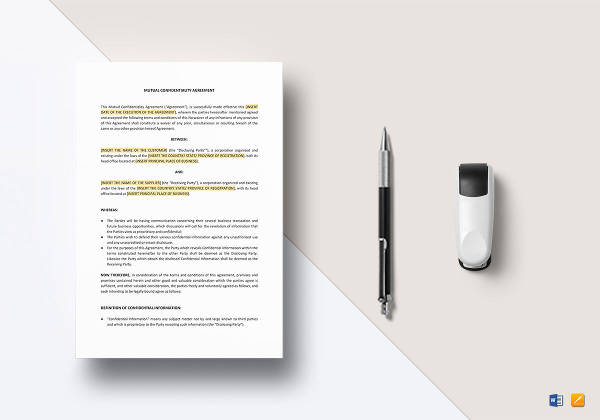 The owner of the secret would tend to be more careful next time on who he or she shares personal information to. That is the same thing a businessman or an employer feels if they ever get betrayed by someone in the organization who chose to disclose confidential information to someone in or outside the office or company. A restaurant’s recipe is a secret that should never be disclosed to a competitor because that will completely breach the confidentiality agreement between the employer and the employee. 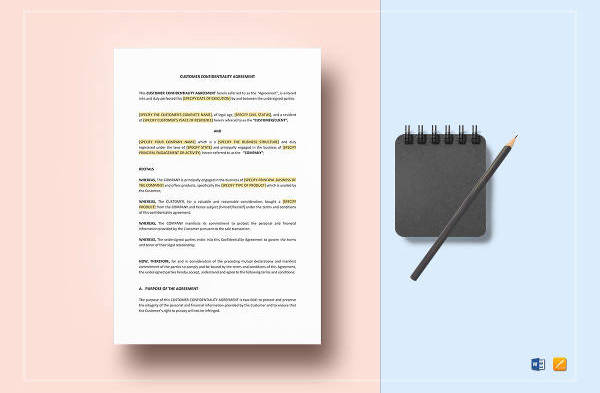 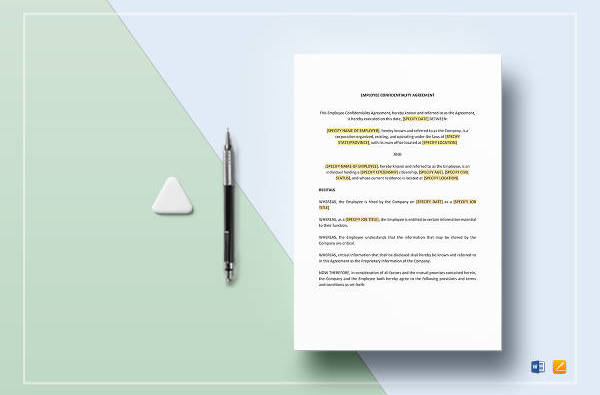 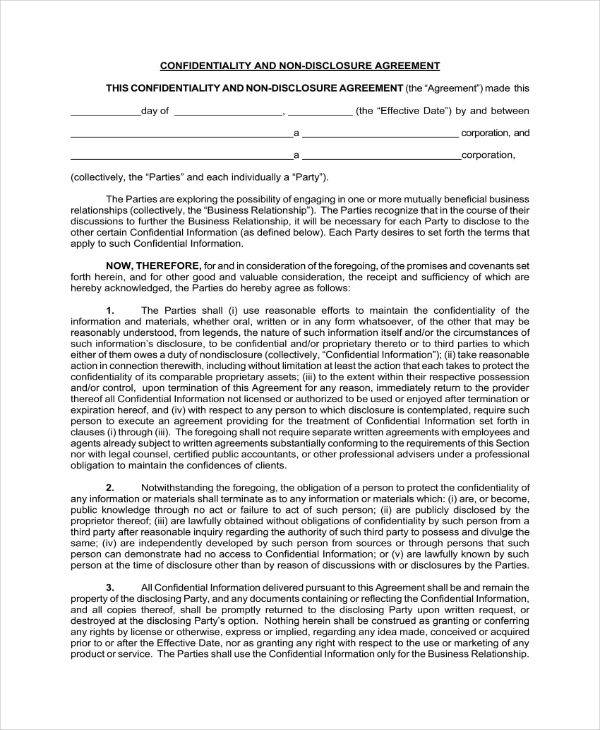 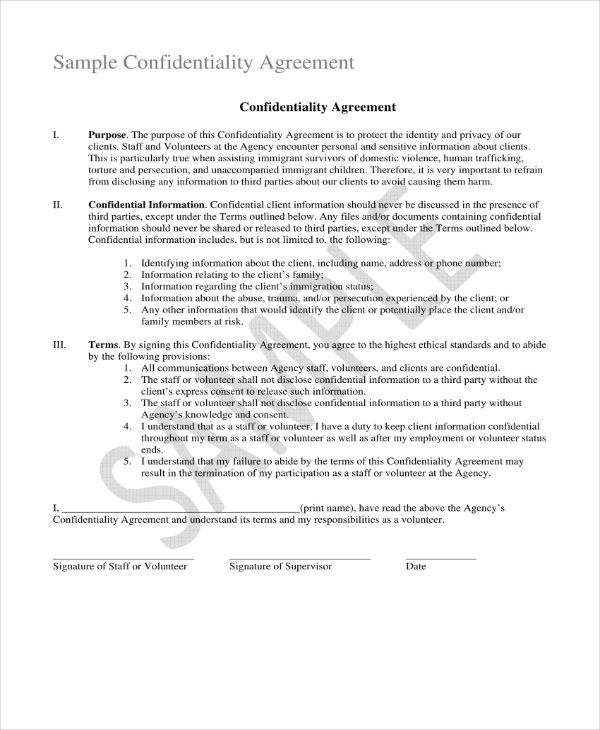 What is a confidentiality agreement?

As we have explained earlier, a secret should be always a secret unless the owner of the secret permits you to share them to a specific person. If there will come a point in time that the owner of the secret finds out that you spread valuable information, a conflict will arise quickly. That is also the same in a relationship between the employer and the employee. You may also see human resources confidentiality agreements.

A company has information in which not only the employees know but also their consumers and competitors. But there is also some information about the company that only can be shared by specific employees from their employers. Regardless of what position the employee as if the manager or CEO gives and lets you read a confidentiality agreement, then the information you will be getting should remain to yourself only, 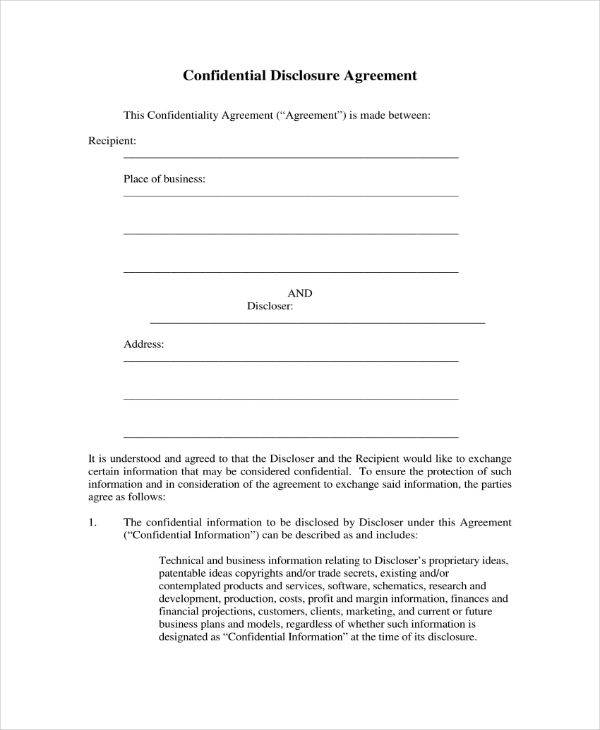 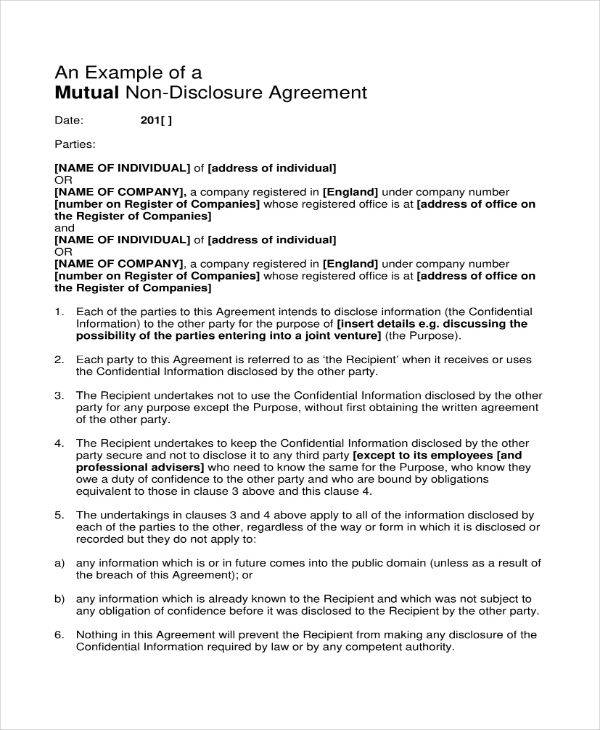 Where Are Confidentiality Agreements Used?

If you have fully read and understood what a confidentiality or a non-disclosure agreement is, it is time for you to find out what the typical situations are where employers would want to use this kind of agreement. We encourage you to take note of the following because if ever you are given a confidentiality agreement, you would understand why and what kind of information will be relayed to you.

These are the typical situations:

These are typical situations in which an employer would use a confidentiality or sample non-disclosure agreement to his or her employee or potential clients who are involved one way or another in business transactions around the company. It is like keeping a personal secret but only this time, it is in a form of a business related secret. The ones who are involved in this agreement should know their place and role in regards to keeping the information being relayed to them a secret and should not disclose any information unless their agreement had some considerations. 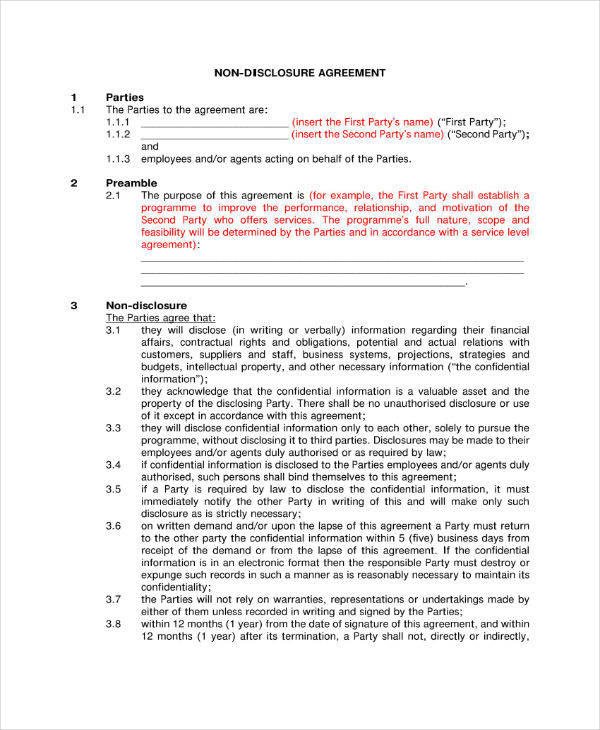 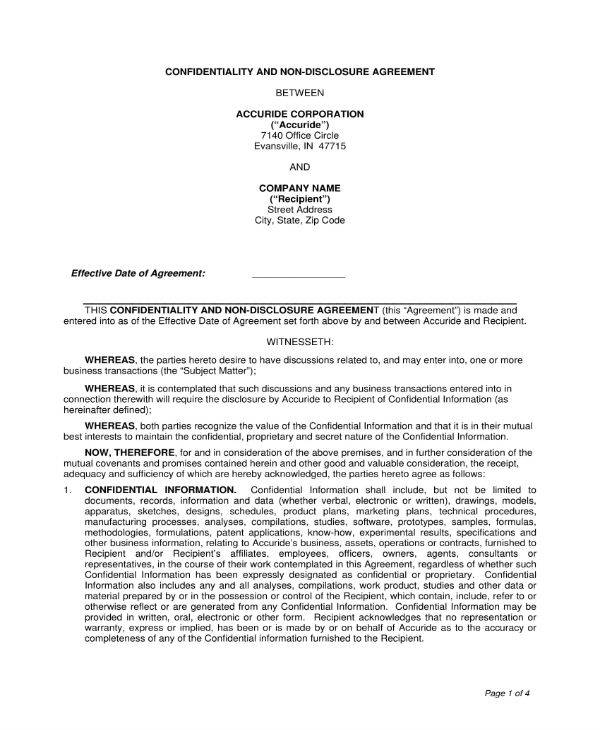 What happens when there is a breach of the confidentiality agreement?

A friendship can be ruined because of a personal secret being spread about a particular person or information. It has varied consequences that would hurt both of the people involved, That also happens in the business world. There are always penalties for everything that has been breached or can be a form of trespassing or fraud in a company or business. You may also see non-disclosure and confidentiality agreements.

There are specific penalty or penalties in each element of a company that is being breached. In this article, we will be enumerating to you the different kinds of penalties for employees who decide to breach the confidentiality agreement between him and his employer.

We encourage you to be mindful of these penalties so that in the event that you might be given a confidentiality or a non-disclosure agreement, you would know the consequences if ever you decide to tell everyone about it until it reaches the one whom you agreed to keep it confidential. Knowing these penalties can help you follow the sample agreement accordingly and would not have to face legal actions.

Here are the general penalties when one breaches the confidentiality agreement: