An autopsy Report Template is really important in finding the actual causes or conditions behind the unnatural death of a person. For ages, such reports have been instrumental in solving several murder mysteries, both in fiction and real life. You may also see report samples. 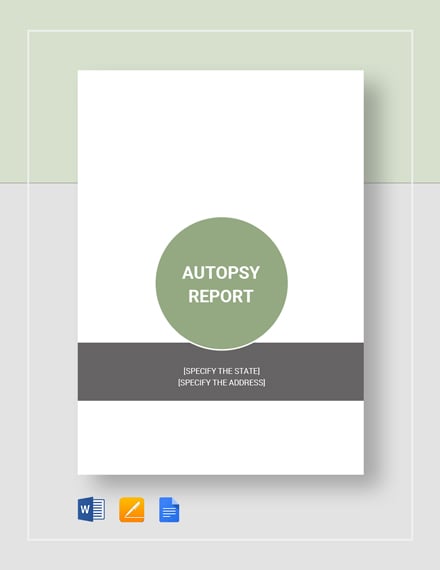 There have been cases where heinous kills appearing as suicides have been proved wrong by the autopsy, ensuring justice for the deceased and his or her near ones. If you need help in filing such a report, there are pre-designed autopsy report templates online. You can also see Project Report Templates. 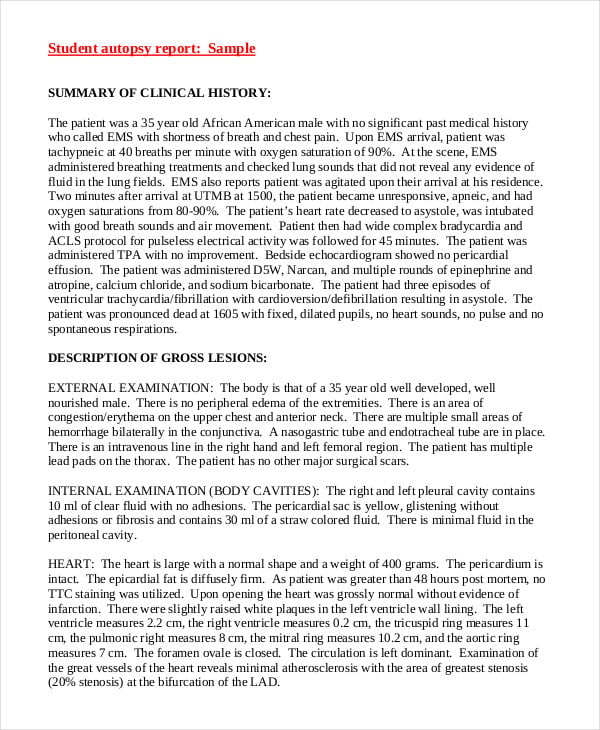 You have a detailed autopsy report template here of a student that begins with the summary of his/her clinical history and then it offers concise descriptions on each of the major body parts, followed by reflections of the doctor. 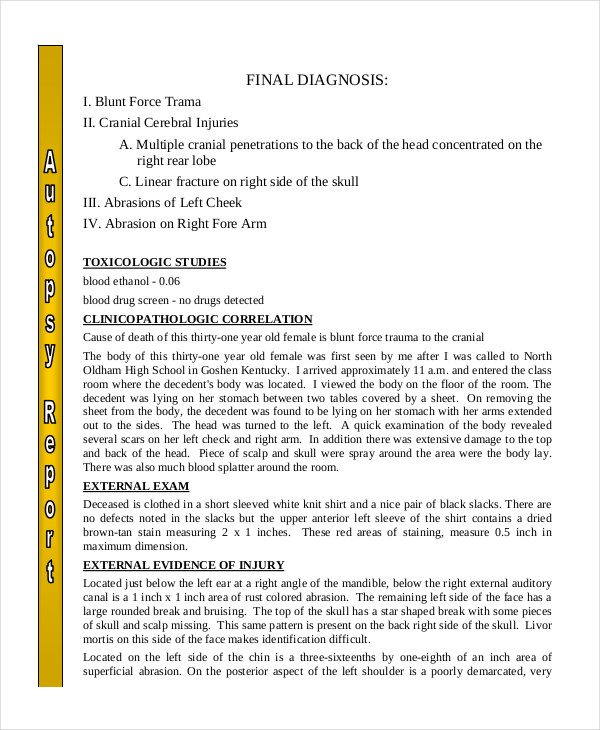 This is the autopsy report of a female which starts with the final diagnosis of death, followed by the report on the  toxicological study, clinicopathologic correlation, and detailed data on external and internal examination.

> What are the tips to write an Autopsy Report Template?

You have to start the autopsy report template with the name, sex, and age of the deceased, the time and hour of death as well as the autopsy, and the name of the pathologist. Then, you will start the report with the final diagnosis regarding the cause/causes of death in bullet points. You can also see Word Report Templates.

Next, you will record your findings from the toxicological study. Then, the report would contain a full analysis of the external and internal body of the deceased at the time of death. Do not forget to mention about the evidence collected from the scene of death and the person’s body- all of which helped the pathologist to draw up his diagnosis. 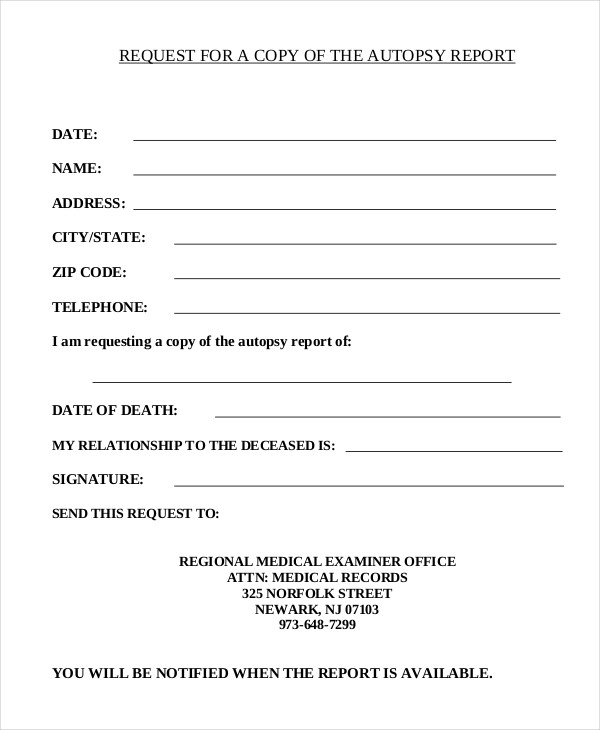 If you are looking to apply for an autopsy examination of a deceased relative or a friend, this template will help you to file the application. You have to mention your relation with the deceased person here. 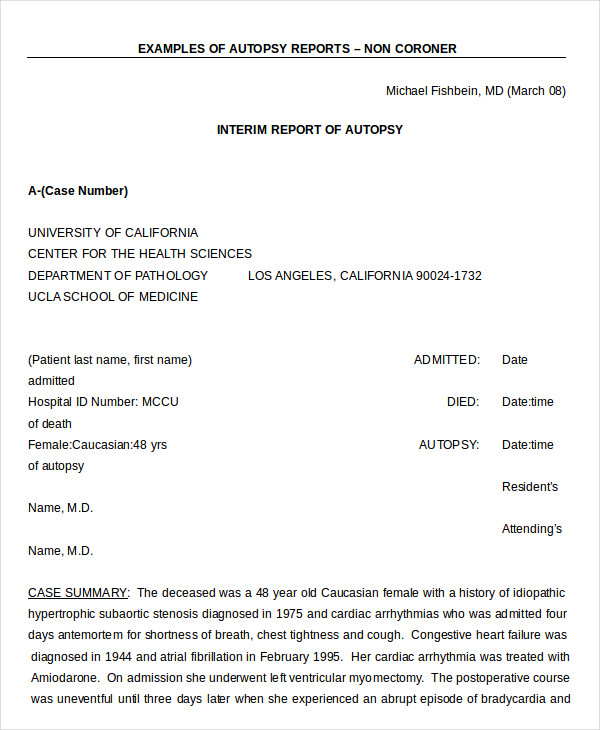 You have a compact autopsy report template here that opens up with the case summary of the casualty and then goes down to include the anatomic pathological diagnosis. It concludes with resident’s and attendee’s signatures. 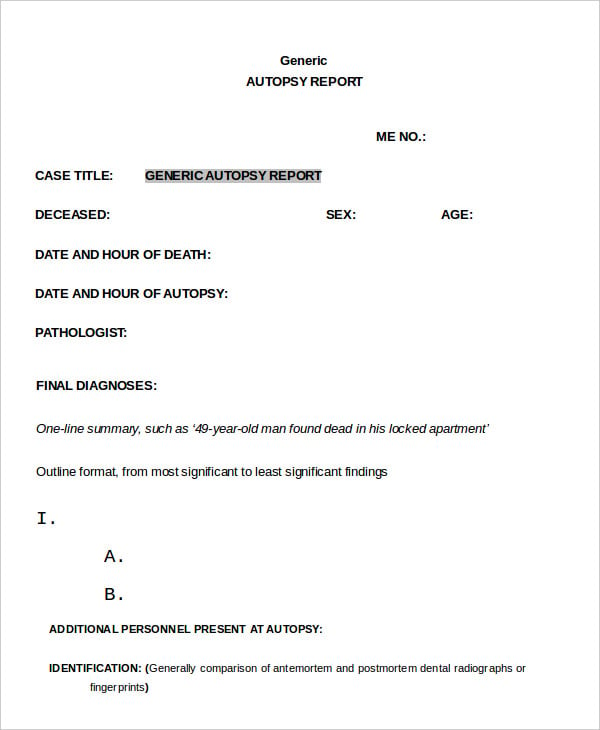 If you need guidance on how to draft an autopsy report, this template here would be handy with its detailed instructions on what sections to include and what to include under each.

> What is the benefit of an Autopsy Report Template?

When a person does not die a natural death, there is usually confusion regarding his or her cause of death. The autopsy report template is the much needed here as it extends the final diagnosis of the deceased’s body, identifying the actual reason behind the cause of death. You can also see Excel Report Templates.

Added to citing the reason, the report also presents details on the external and internal body examination of the corpse which helps in understanding the person’s condition during the tragic incident. Such reports are imperative to establish the truth behind the death in law courts if any case or investigation is being conducted regarding the death.