The Super Bowl is one of today’s most-watched annual sports events. It is the National Football League’s playoffs championship held every year. 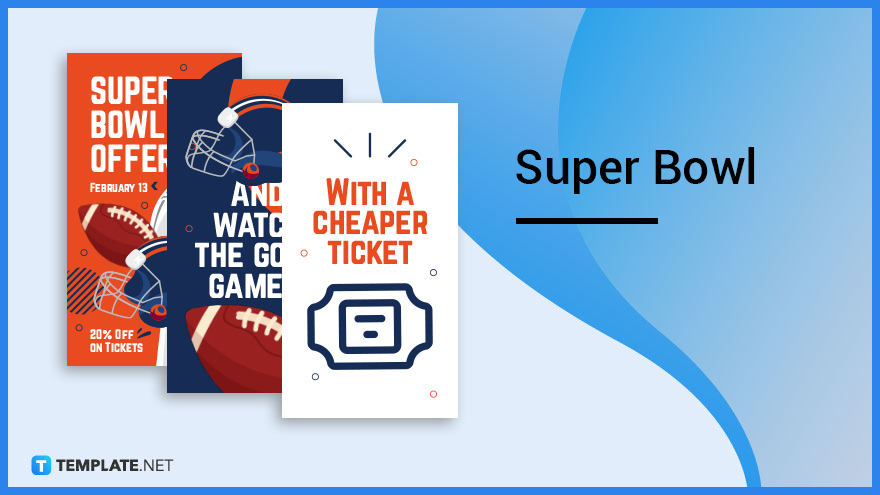 That means that it is the ultimate final that awards the winner the championship trophy.

What Is a Super Bowl?

The Super Bowl was made when the NFL and the rival American Football League (AFL) agreed to merge in 1966 so that their best teams could come out at the top and play for a title. It was the AFL-NFL World Championship Game until Super Bowl III in 1969, when the name “Super Bowl” was used for the first time. Since 2022, it has been held every other second Sunday of February in a different city.

A giveaway Instagram post is useful to entice the audience of your discounts on food and snacks during Super Bowl Sunday. This features a playful design highlighting the NFL trophy, but you can customize it and add the NFL championship ring, or make the texts transparent. You may also use it for your Instagram ads. 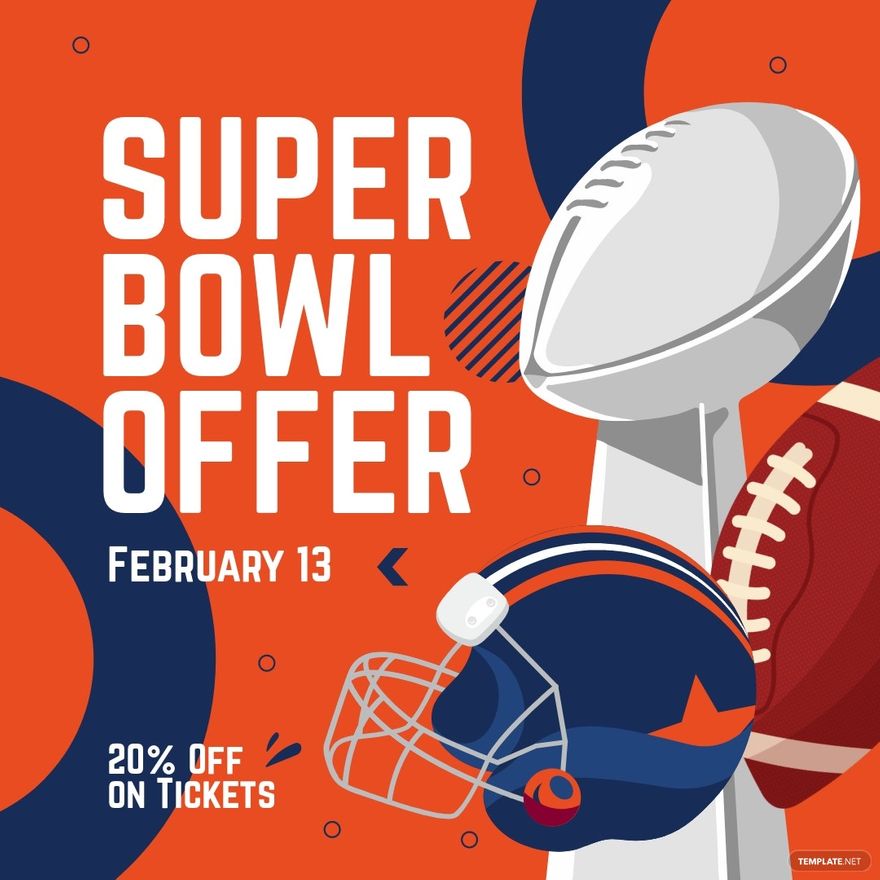 Snapchat is a quick and entertaining app where you can send photos and videos to your loved ones. Invite your friends to the Super Bowl with a selfie and a festive Super Bowl event Snapchat Geofilter. Make funny faces and root for the Chiefs with this filter on your background. 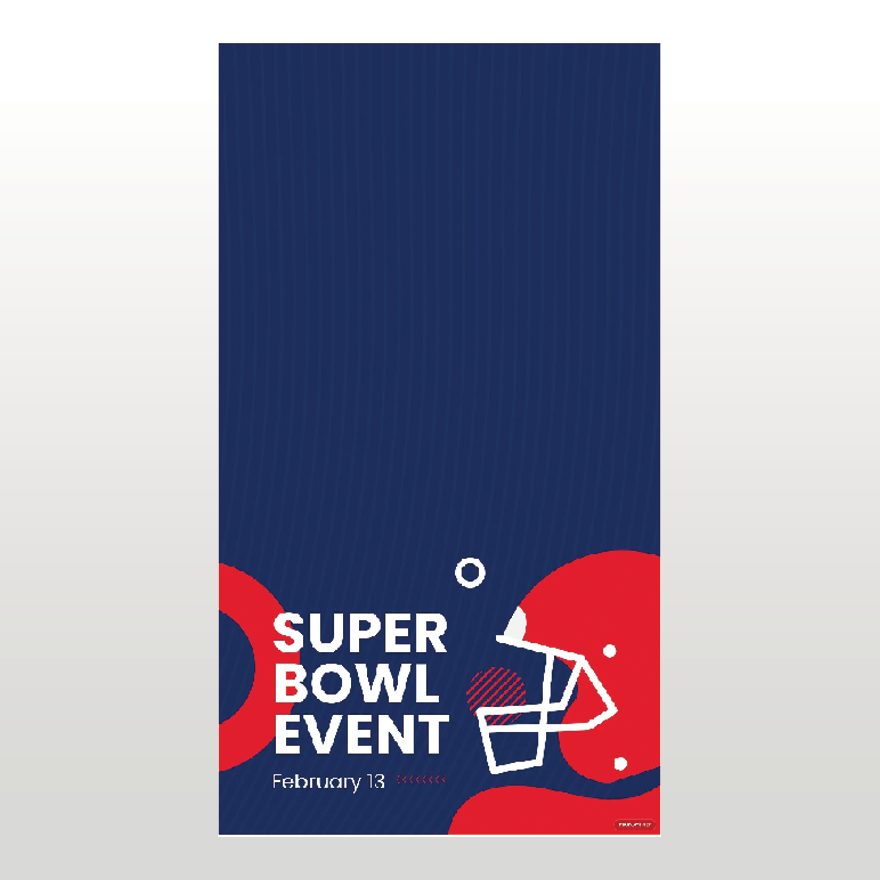 With this creative event Whatsapp post template, build excitement and interest for your Super Bowl event on Whatsapp. It looks simple but very aesthetic. Let them know the confetti, and good afterparty music is ready. 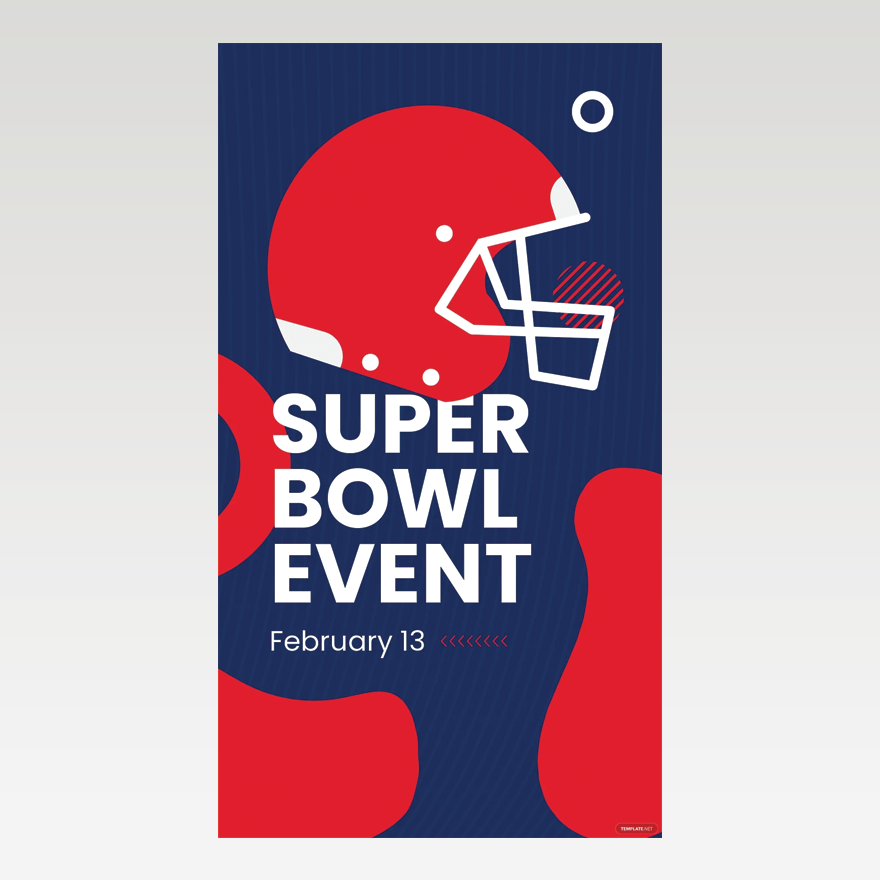 Going to the game can be a little too expensive. Enjoy the game together live on Whatsapp instead. Send your friends invites using this cool watch party Whatsapp post template. 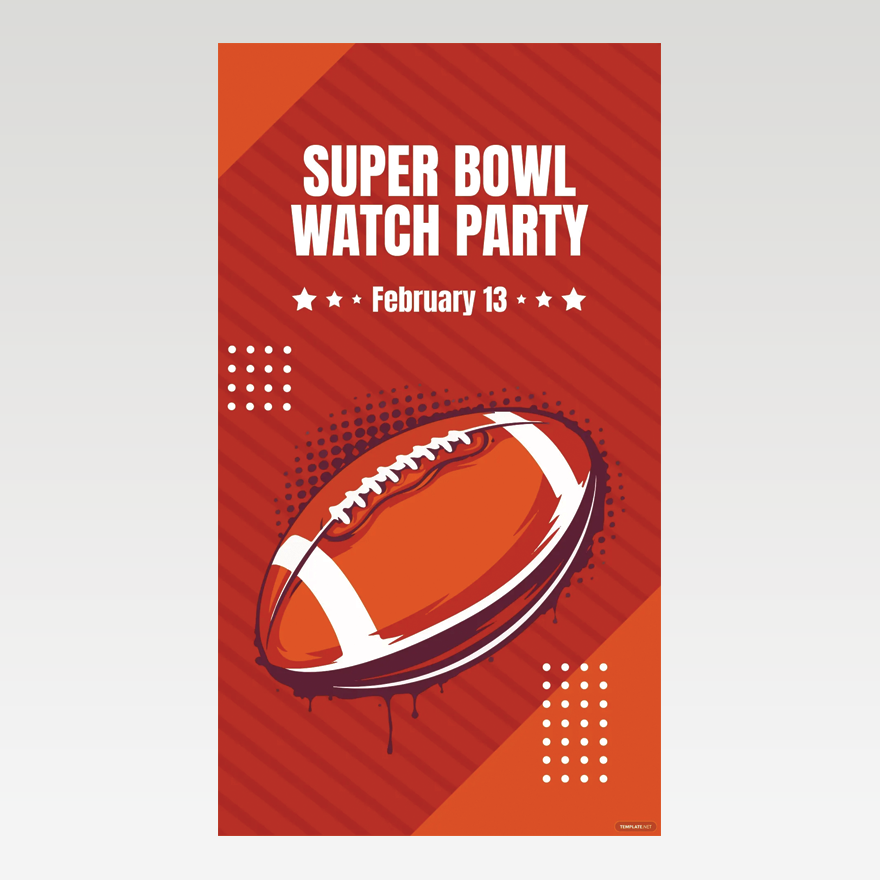 Sports is entertainment that always sparks a fun conversation, even in the workplace. Let your colleagues on Linkedin know your favorite team with this Super Bowl Sunday Linkedin post template. It will surely get them excited about who will win this year’s trophy. 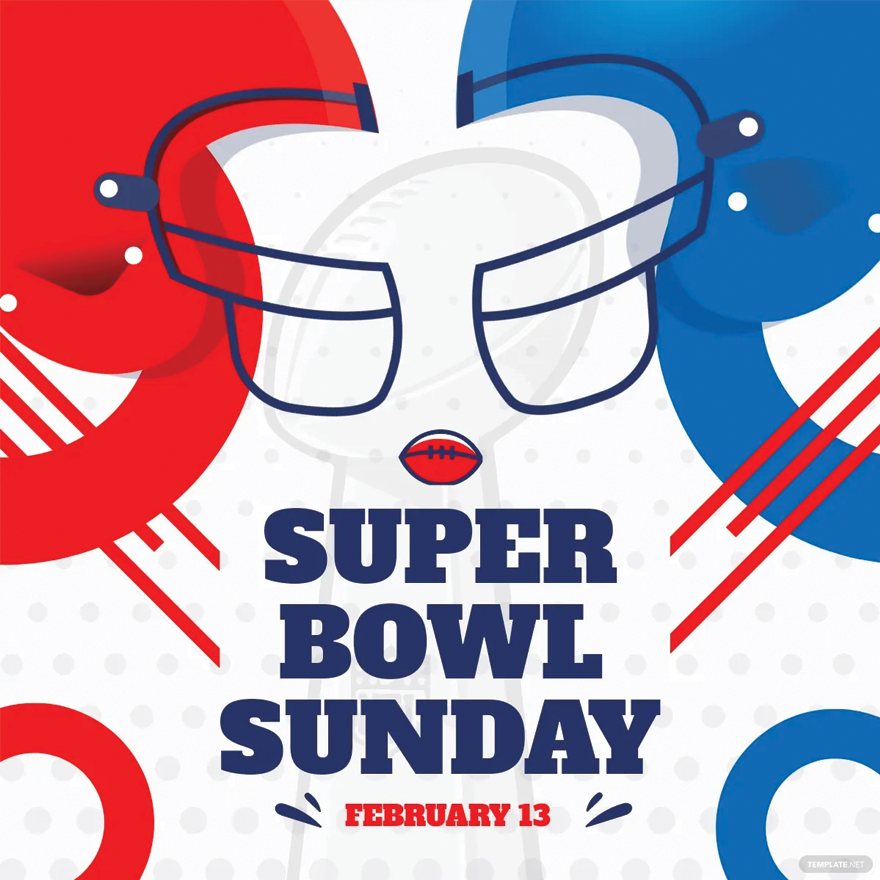 Get your guests excited about your upcoming Super Bowl Sunday party using this customizable ticket invitation template. It contains a fantastic design that will surely get people to join the fun. Highlight the halftime show and a photo of this year’s Super Bowl teams to make it more exciting. 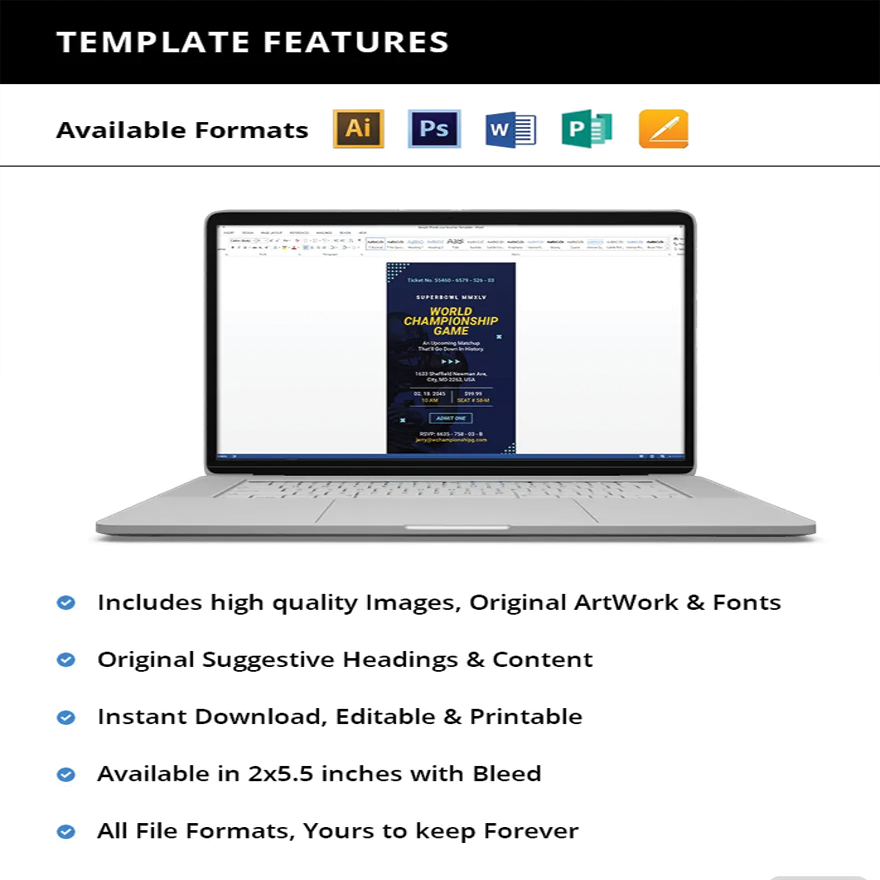 A flyer is a type of paper advertisement that is meant to reach a large number of people. It is usually posted or passed out in public, given to people, or sent through the mail. Use this eye-catching blue and red Super Bowl Sunday flyer that features the date of the game to build enthusiasm about the grand stadium of the game. 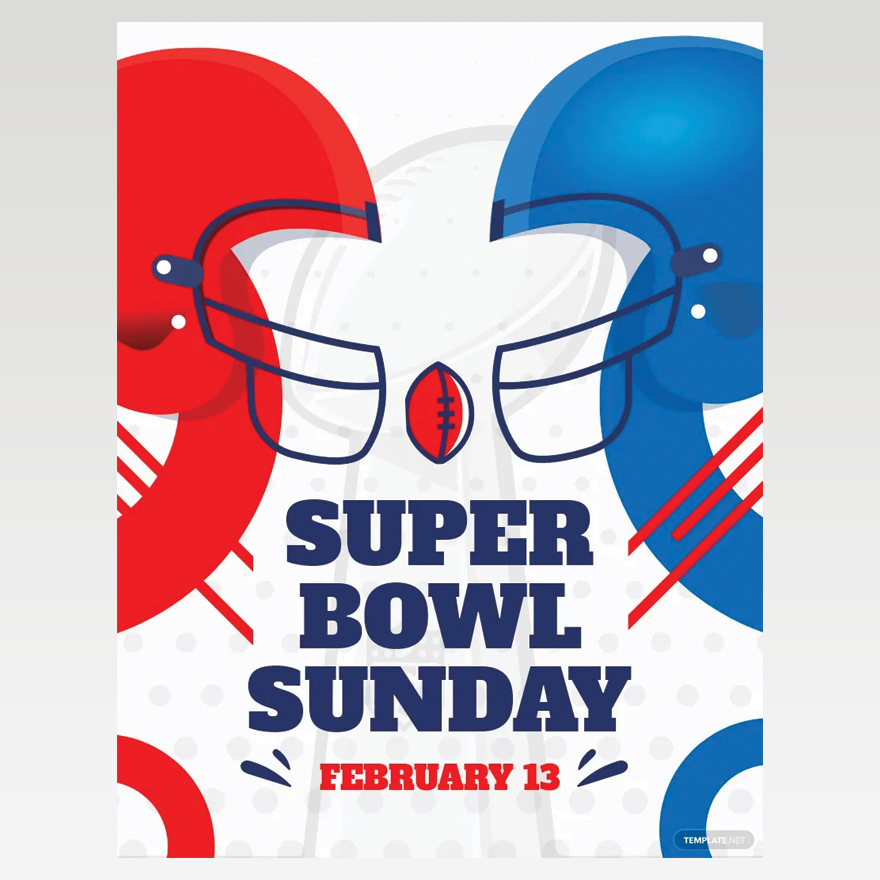 You can never go wrong with monochromatic designs. This offer flyer presents a simple yet fantastic graphic design that will surely appeal to football fans. It is intended to capture more anticipation for the Super Bowl. 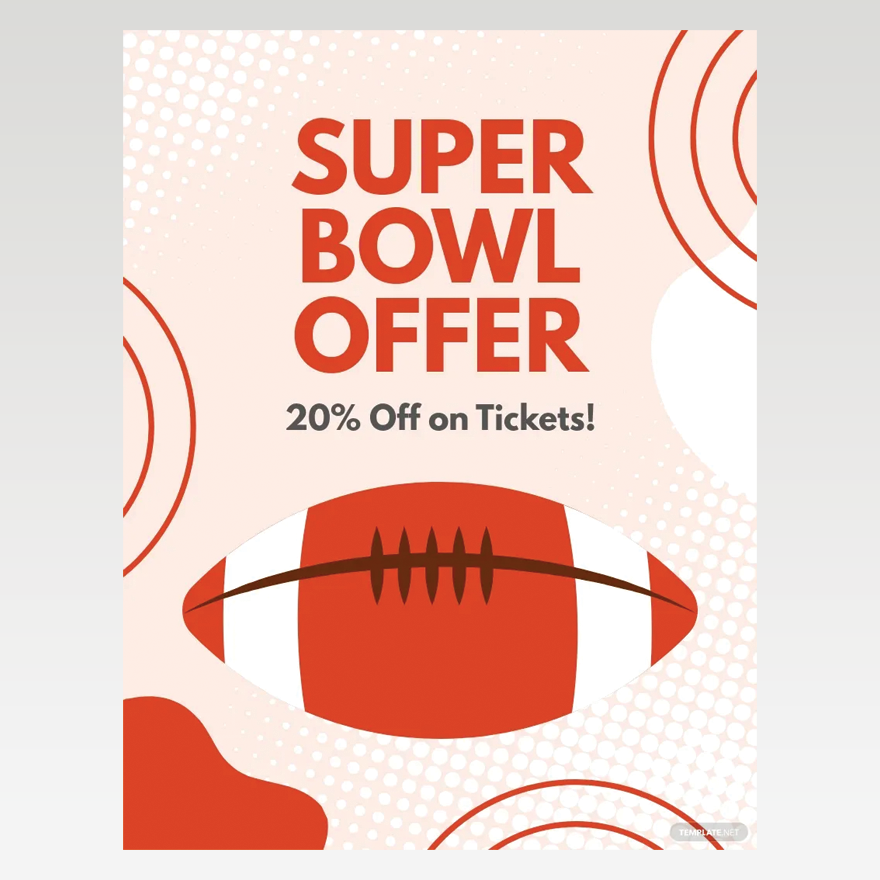 his very fun and creative Sunday Snapchat Geofilter will get your friends to snap a selfie cheering for their favorite teams. It features the iconic Super Bowl trophy and football gears in blue and red. Add this to your Snapchat filter collections and customize it how you like. 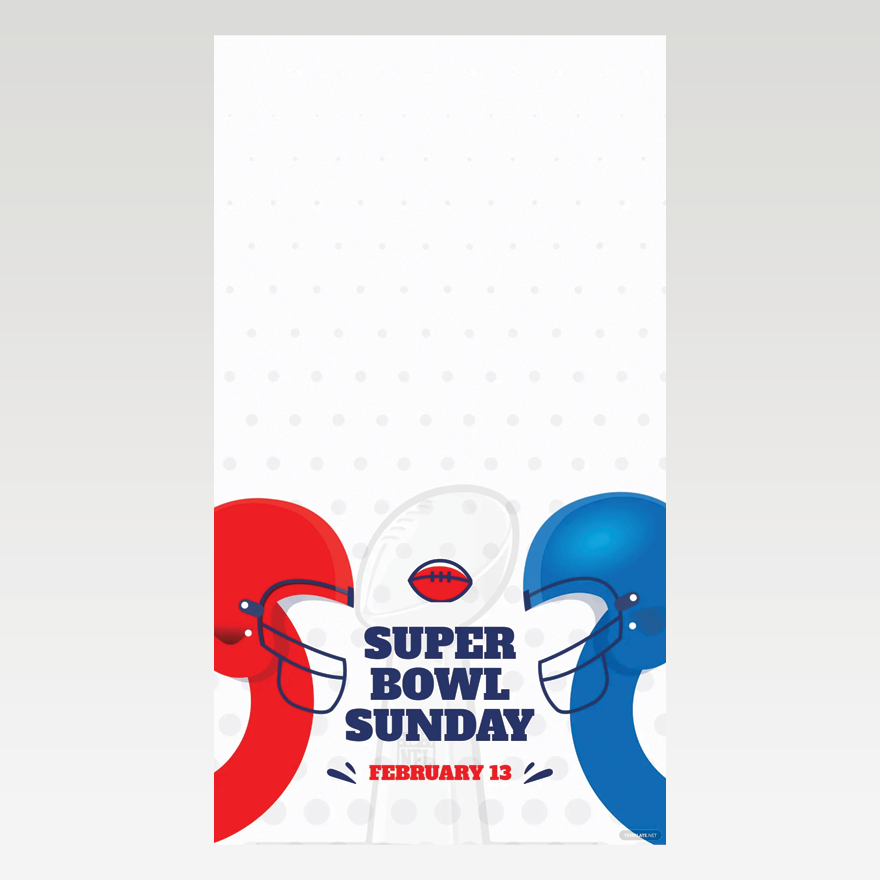 You can reach potential customers where they are watching by advertising with online videos. Make your YouTube ad offer with this brilliant offer YouTube banner template. It has an artistic look that will immediately grab your attention with one look. 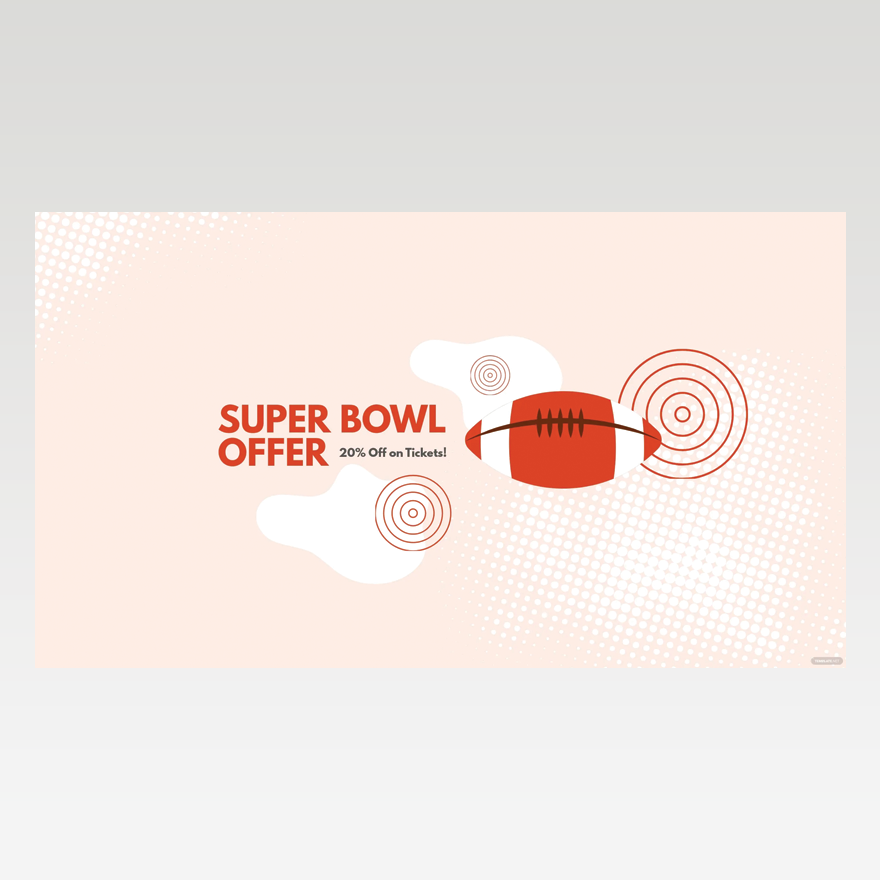 The Super Bowl draws massive crowds every year. With its spectacular halftime performance, cutting-edge ads, and huge stadium, it is one of the most anticipated athletic events worldwide and is broadcast in more than 170 countries. Among the many teams that play the game are the Falcons, Giants, Saints, Chiefs, Packers, and Patriots.

Every year, the National Football League (NFL) champion is chosen at the Super Bowl, a popular sporting event. It determines the best of the best in the league. It also culminates the season of the league.

Many people around the world tune in to watch the Super Bowl every year. Statistics show that about 120 million people watch this show and this does not include the aftershow recap of the game statistics and results. The magnitude of the anticipation is so great that the whole game is broadcast in more than 200 countries and reaches an additional 100 million people worldwide.

The Super Bowl is a great time to sell things through marketing and advertising. This lets brands show off their products to millions of people worldwide. As a result,  this generates a lot of revenue for the show’s investors.

The NFL has offered to sell itself and the Super Bowl in particular as something only Americans can enjoy. In some way, it highlights the country’s patriotism as it symbolizes its values. It’s now not only a celebration of the sport but also of the country, which is how many Americans (and a lot of the rest of the world) now see it: as a big, showy event.

The game showcases the value of Sportsmanship. It celebrates camaraderie and fellowship. Teams show much respect for each regardless of who takes the trophy home.

What’s in a Super Bowl? Parts?

An eye-catching Super Bowl template should start with a heading that elaborates the main purpose.

The subtitle should contain the specifics and should also be clear but concise.

Lastly, a distinguishable Super Bowl design should have a creative and fun background, whether football gear, a ball, or the NFL Logo.

How to Design a Super Bowl?

1. Choose a Super Bowl size.
2. Determine the purpose.
3. Select a Super Bowl template.
4. Customize the graphic design.
5. Edit the text and message.
6. Review the message and download the file. 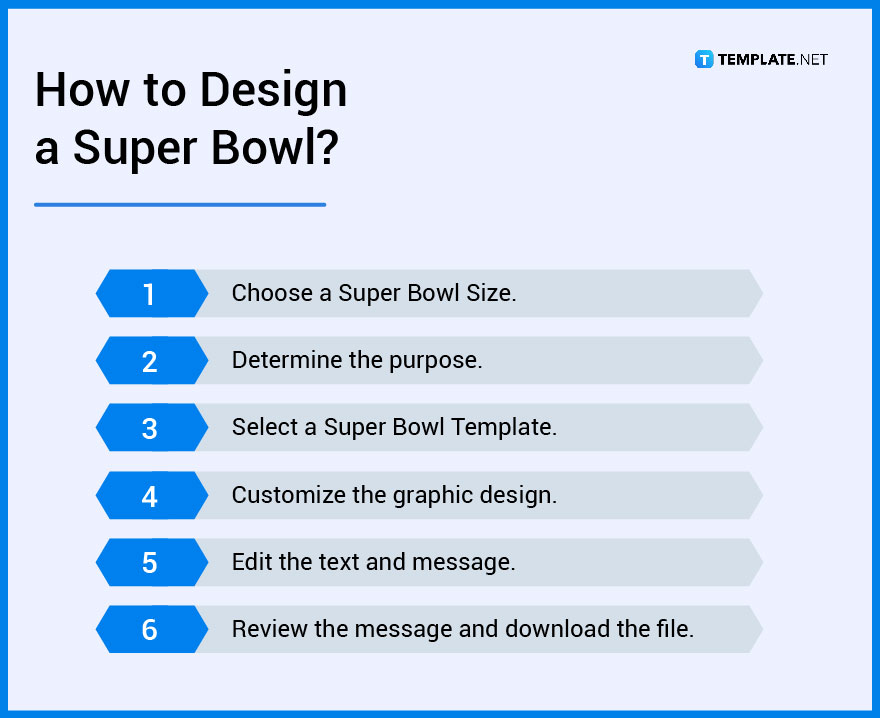 The Super Bowl is the culmination of each NFL season and represents the pinnacle of American football at the professional level.

On the other hand, the World Cup in football (soccer) is a tournament with 32 national teams held every four years by the Fédération Internationale de Football Association (FIFA).

What’s the Difference Between a Super Bowl, Pro Bowl, & Playoffs

Super Bowl is the ultimate game and the NFL championship will be awarded to the victor of this game.

In a Pro Bowl, the best players from different teams play against each other for one all-star game.

The playoffs consist of seven teams from the league’s two conferences.

Super Bowl templates may come in a wide variety of shapes and sizes. Although there is no standard size, the following are some of the more common super bowl sizes: 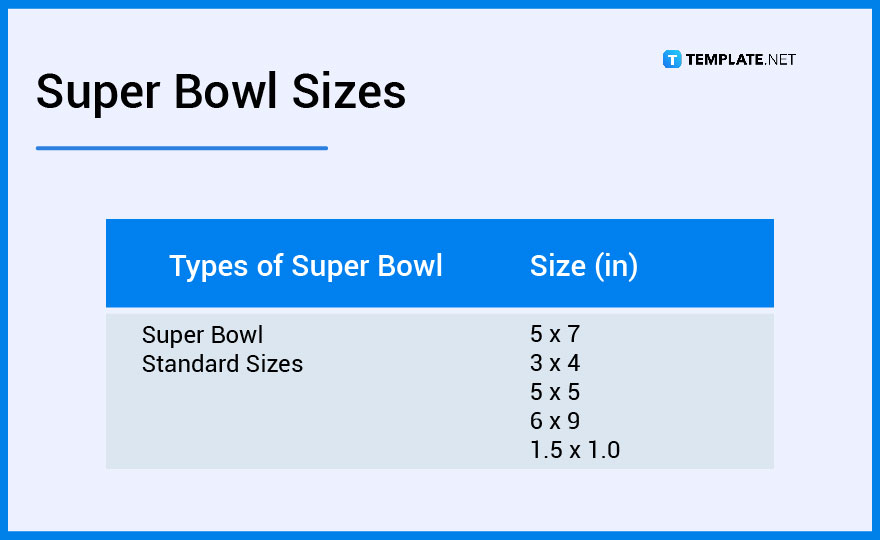 Get inspired with these Super Bowl ideas to help you get started on your own Super Bowl poster, invitation, or flyer!

What was the 1st Super Bowl called?

The original name of the game was “AFL-NFL World Championship Game.”

What’s so special about Super Bowl?

The National Football League’s championship game (NFL) is the Super Bowl where teams compete all season long to earn a spot in the Super Bowl.

Why is the Super Bowl the most-watched event?

How do people celebrate Super Bowl?

From the stadium and host city to the homes and other gathering places of football enthusiasts and their friends and family, this unofficial national holiday is celebrated with festivities, feasting, and spectacle.

What do you do at a Super Bowl party?

What time should you start a Super Bowl party?

Often these Super Bowl parties don’t start or end at a certain time, and some people might’ve been invited to more than one.

Where was first Super Bowl played?

What are Super Bowl traditions?

Most people spend the day with their friends or family having chips, pizza, and chili.

What is the symbol of the Super Bowl?

XLV-XLVI: Here’s the new logo that will stay in place at the base of the Lombardi Trophy; only the Roman numerals and the stadium will change.

What does the purple represent in the Super Bowl?

Purple stands for fairness, green for faith, and gold for strength.