If you and another party where to get caught up in a dispute, then the natural reaction of either would be to take the matter to court. However, there are some who think that taking certain problems to court will consume too much time and finances and would rather only have to discuss with the other party about how the matter should be settled. You may also see Agreement Templates 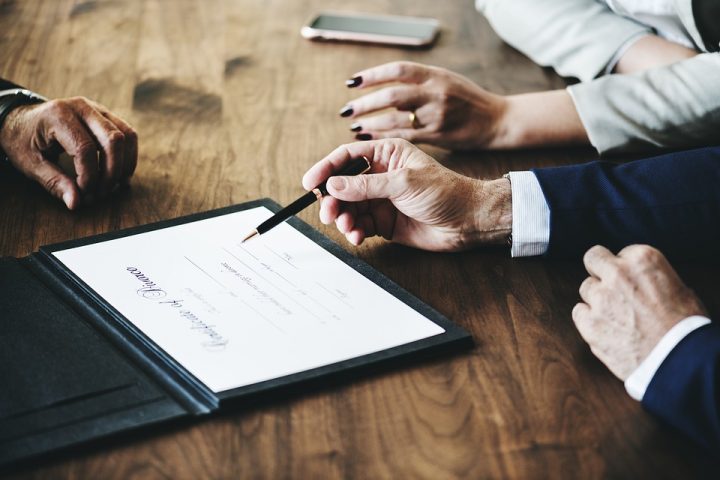 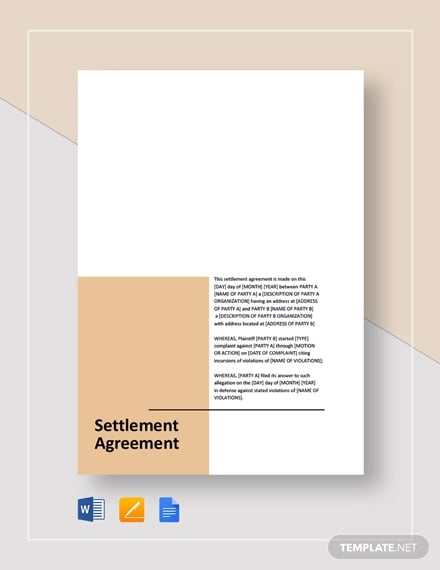 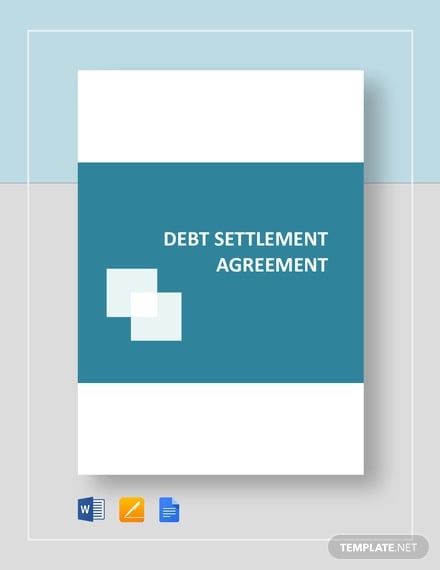 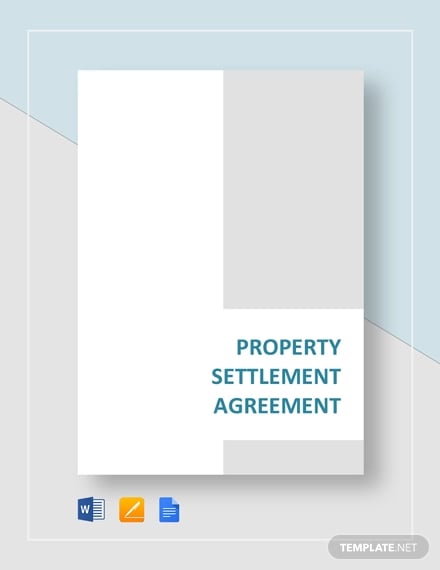 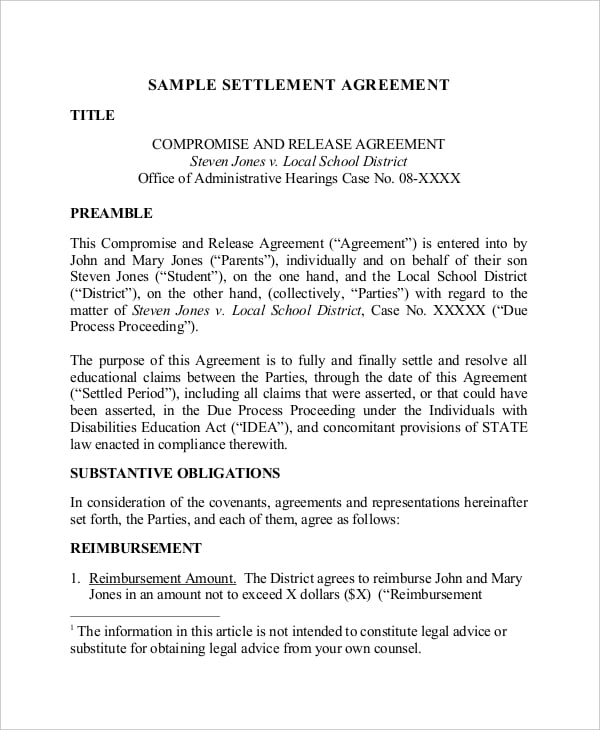 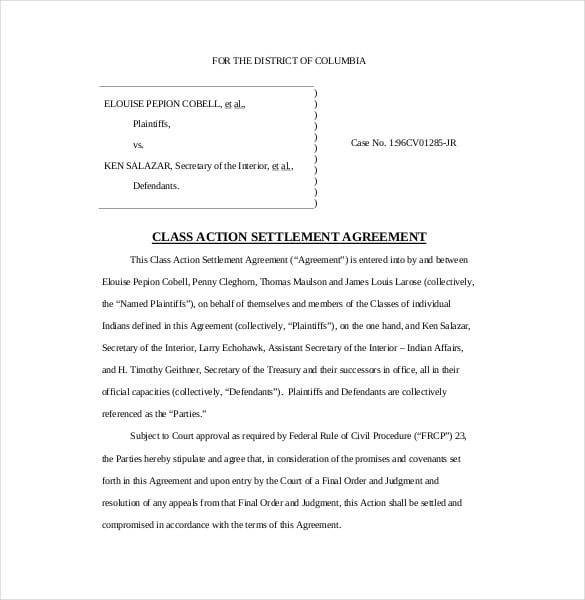 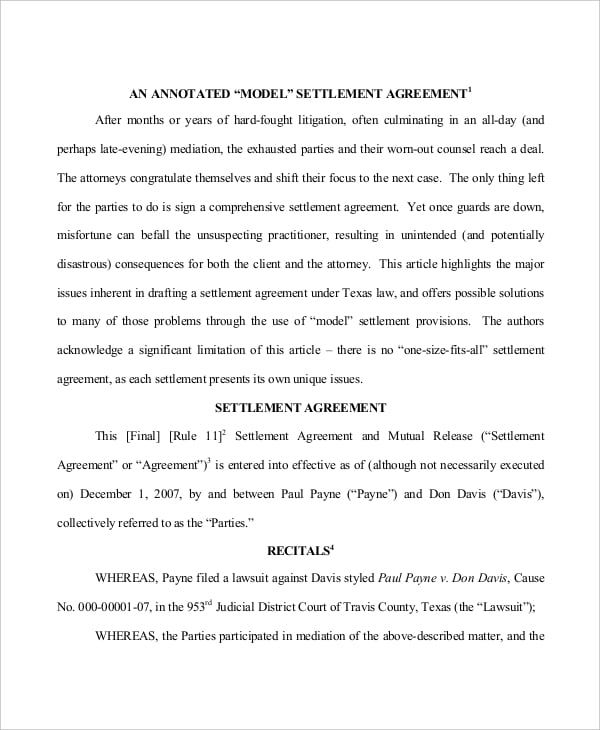 How to Write a Settlement Agreement

Think of this as a legally binding contract that’s meant to resolve any dispute between one party and another so that neither will have to go through the judicial process. When you’re making this kind of document, you must understand that it holds a certain power as it dictates how both will go about the dispute; basically telling them what they can and cannot do, as well as how compensation will be made. Which is why if you’re going to make this document, you have to be very careful with what you put in it. You may also see confidentiality settlement agreements.

So here are the steps you should take in order to create an effective settlement agreement:

If you’re going to start making the agreement, then you’ll want to start it by tilting it in a way that informs the reader about what it’s all about. You may also see divorce agreement templates.

When you’re going to make an agreement document, you’ll need to have a paragraph which introduces all of the parties that are involved in the matter as well as their roles. You want to make sure that the anyone who reads the document will easily be able to identify who is who, meaning that you are going to have to provide the complete names of the people that are involved. Also, you’ll want to write down their addresses and a state where the parties named have the capacity and authority to enter the agreement. You may also see release agreement templates.

3. Provide a Description of the Dispute

One o the most important sections of the document that the people involved will definitely need to go through is the one where the dispute is explained in a detailed manner. In it, one will know all about the “who”, “what”, “when”, “where”, and “how” aspects of the dispute. It is important to do this so both parties are in agreement about what specific act is being discussed in the agreement as well as what has to be settled. Because let’s say that one party sees that there are a couple of inconsistencies. Both will need to discuss the matter again to ensure that the description regarding the matter is nothing but the truth. You may also see release agreement templates.

Without this provision, a court will have a tough time upholding and enforcing your settlement agreement in the event it is breached otherwise you’re going to have to get it approved. You may also see sample divorce agreement templates.

4. Include Statement Regarding Compensation in Exchange of the Release of Legal Liability

This is the part of the agreement that will need to have the required consideration, which is necessary to spell out in order to have a valid contract. You may also see sample money agreement templates.

5. Include a Statement About the Scope of the Claims Which Need to be Settled

During negotiations, you should have determined with the other party involved about whether the settlement agreement will be able to resolve all the claims, including unknown and future claims, or whether it will cover only a certain claim. It’s advisable that you have the agreement to take care of all claims, including unknown and future claims so that the two parties will no longer have any problems once the agreement is over and done with. You may also see sample loan agreement templates.

Sometimes, a conditional settlement agreement may be desirable. A good example would be if a certain matter had to be settled with a certain action, but that particular action will need to take time in order to complete. It is not usually desirable in situations where something may not be completed by a certain date, such as when a person has to keep the confidential information about a company in secret. In this case, you should negotiate an unconditional settlement agreement, wherein the effects would take place after a certain number of days. You may also see sample confidentiality agreements. 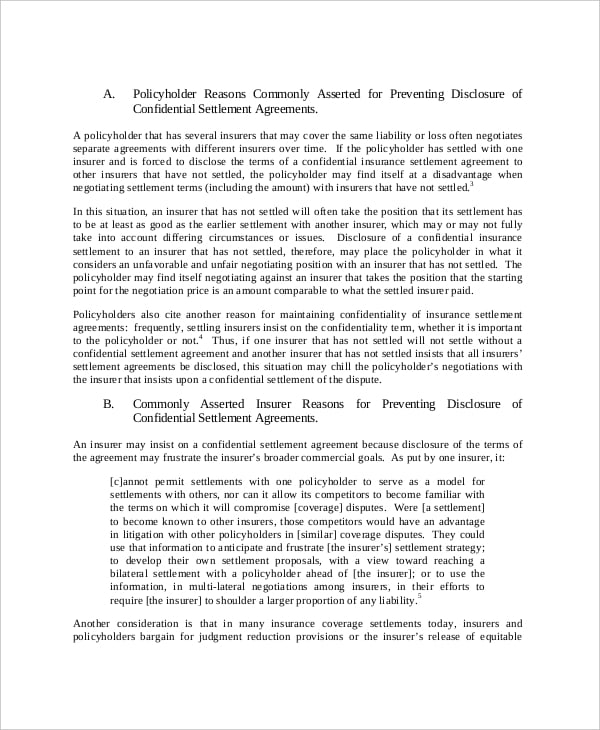 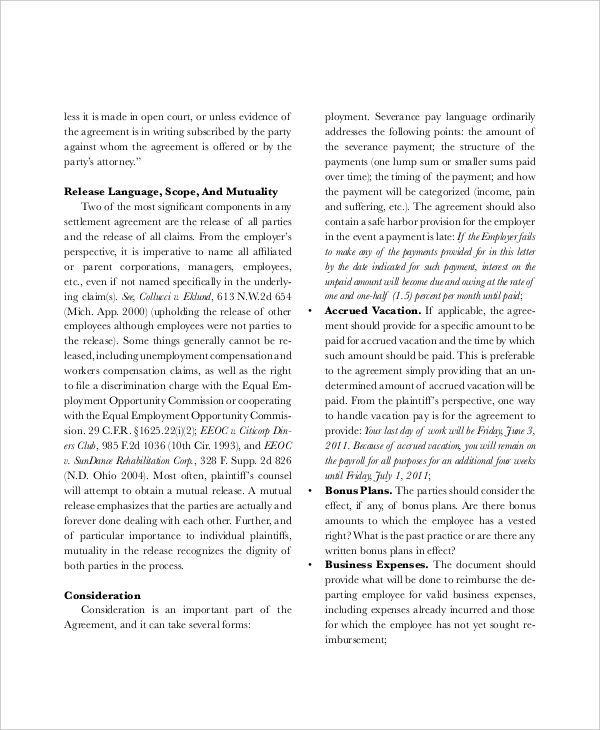 7. Spell Out Whether the Release Will Include Any Faults or Liabilities

Oftentimes, when parties are agreeing to settle a dispute through a mutual agreement as opposed to going through the judicial process, the party that is providing the settlement payment might not want to admit to any faults or liabilities. If you and the other party have already discussed the matter and have come to an agreement, then you may provide a clause which states that the other party who is in the wrong to compensate without having to admit any wrongdoings. You may also see subcontractor agreement templates.

8. State Whether the Agreement Is Confidential

Making your settlement agreement confidential ensures that neither party that’s involved is allowed to share any information regarding how the matter will be settled to anyone outside of the agreement. There will be times where one party would rather not have the information shared with anyone that isn’t involved, so having the option to keep the information confidential is a good way to get both parties to sign. This type of provision comes up most in business settlements where one company is often involved in litigation and settlement, and that it doesn’t want other potential litigants to know the usual terms of agreements. You may also see shareholder agreement templates.

9. Include the Provision of the Dismissal of Any Litigation

If you are in the middle of litigation when you decide to settle and create a settlement agreement, then it’ll be your responsibility to ensure that you include a provision where both parties have come to the conclusion that they will dismiss the litigation and not move forward with it. You may also see separation agreement templates.

10. Provide the Areas for Signatures

And lastly, you’ll want to be able to gain the signatures of the parties that are involved in the handling of the dispute. At the very end of the contract, you will make space for all parties to place their signatures in. Just make sure that they sign, their names are there, and that the date of when the agreement was signed to ensure that it’s official. You may also see sample agreement templates.

If you would like to learn about other types of agreements that you can make, then all you have to do is go to our site. It has all the articles you need to help you with whatever situation you’re facing. Just be sure to read up whatever information is on there and that you utilize them well so that they can effectively help you out. You may also see confidentiality agreements in a word.