Procure an Important Document to Settle Debts and Disputes with Template.nets Free Settlement Agreement Templates. Download Readily Available Document and Letter Samples for Settlement Agreements for Parties Involving Divorce, Property, Payments, Legal Matters, Release, and Master Settlement. All Templates Are Professionally-Made for You to Easily Edit to Your Specifications.

Resolving conflict through a settlement agreement  is the fastest way to put an end to a conflict between two parties. Composing a settlement agreement can be difficult especially if you have to come to terms between two parties. Ready-made templates are available for you to own for an affordable price. We have professionally written Settlement Agreement Templates whether it be payment settlement, divorce settlement, or debt settlement. We assure you 100% customizable templates that can be personalized through a variety of your favorite programs such as Microsoft Word and Google Docs. Download our templates now that will surely save you a lot of time.

How to Write a Settlement Agreement?

A settlement agreement is a legal contract between two parties in dispute or settling an end of something. It would state what the parties have agreed on to resolve their issues. Settlement agreements almost always end up with one party paying a hefty amount of money to the other party. A settlement agreement is not only used in settling issues that have arisen between a couple who wanted a divorce. But, it can also be applied between an employee and employer coming to an agreement and a creditor and debtor trying to settle a debt settlement. 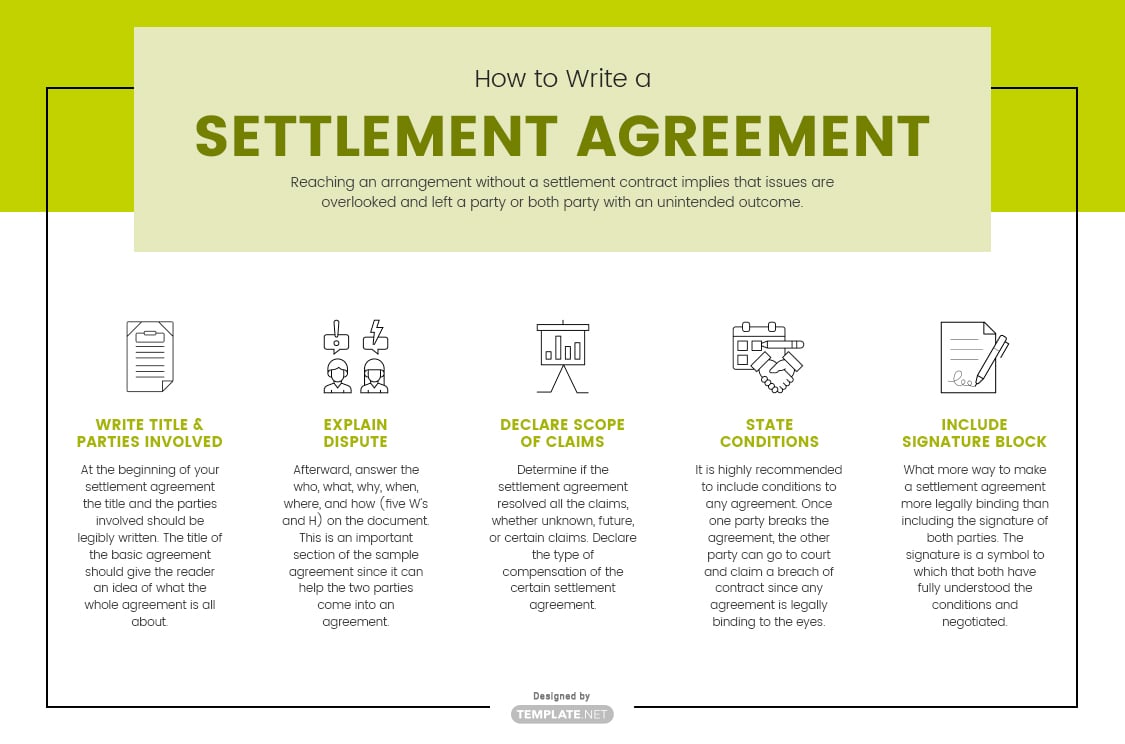 Reaching an arrangement without a settlement contract implies that issues are overlooked and left a party or both parties with an unintended outcome. Simple agreements are powerful so draft and execute them with precision and care. Follow the simple steps in this article in order to create the best settlement agreement according to the issue.

At the beginning of your settlement agreement the title and the parties involved should be legibly written. The title of the basic agreement should give the reader an idea of what the whole agreement is all about. Next, you should write, if possible, one paragraph that introduces both parties and explains their roles in the agreement.

Afterward, answer the who, what, why, when, where, and how (five W's and H) on the document. This is an important section of the sample agreement since it can help the two parties come into an agreement of what action or claims are going to be discussed and what is going to be settled. Be as comprehensive as possible and include any information that may be relevant to the agreement.

3. Declare Scope of Claims and What will be Received

4.State Conditions of the Agreement

It is highly recommended to include conditions for any agreement. Once one party breaks the agreement, the other party can go to court and claim a breach of contract since any agreement is legally binding to the eyes of the legal court. Confidentiality can be a condition of a settlement agreement. It ensures that all the claims during the dispute or agreement cannot be discussed or revealed to anyone.

What more way to make a settlement agreement more legally binding than including the signature of both parties. The signature is a symbol to which that both have fully understood the conditions and negotiated. Thus, leading them to come to a legal agreement and fully agreed to what was written on the document.