Comic strips are one of the longest forms of reading entertainment which is still to date, a favorite of a lot of readers since they can be funny, relatable, visually pleasing, and caters to both kids and adults. Usually found reading periodicals such as magazines and newspapers, comic strips are now also compiled in books and can be read on various websites. 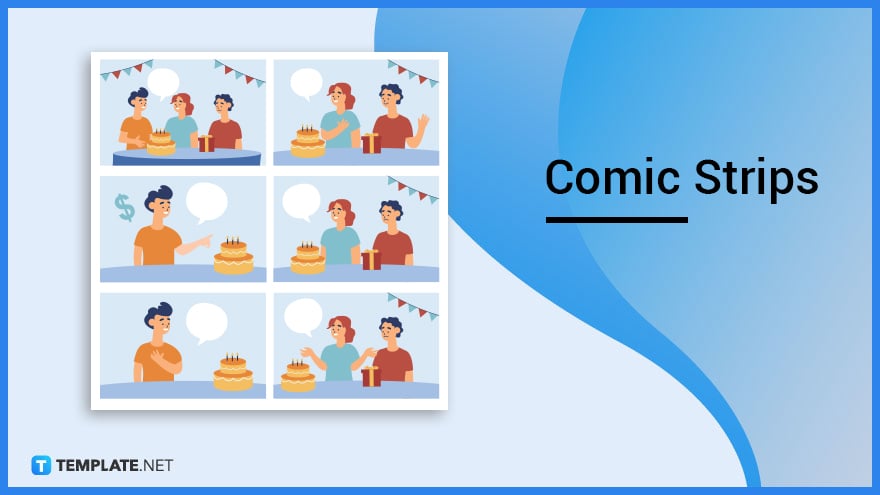 A comic strip is made up of graphic images, often times are cartoonish in nature that is designed to be read as a narrative or a chronological order.

This collection of drawings is not only used purely for entertainment which tackles a large expanse of the genre, it can be educational in nature and is used for campaigns as well.

What Is a Comic Strip?

A comic strip is a set of drawings that are arranged in sequence through a series of three to four panels. This display brief humor or form a narrative and are either in color or in black and white. Comic strips are regularly included in magazines or newspapers which have their own dedicated section. Popular comics are now serialized in comic book magazines, with a strip’s story sometimes continuing over three pages or more.

The understanding of self-care is important to each and every one of us. Simply being mindful of your needs would help you better understand the people around you as well. And what better way to appeal to this notion to the public is through a self-care comic strip, which will help readers visually learn more about its importance. 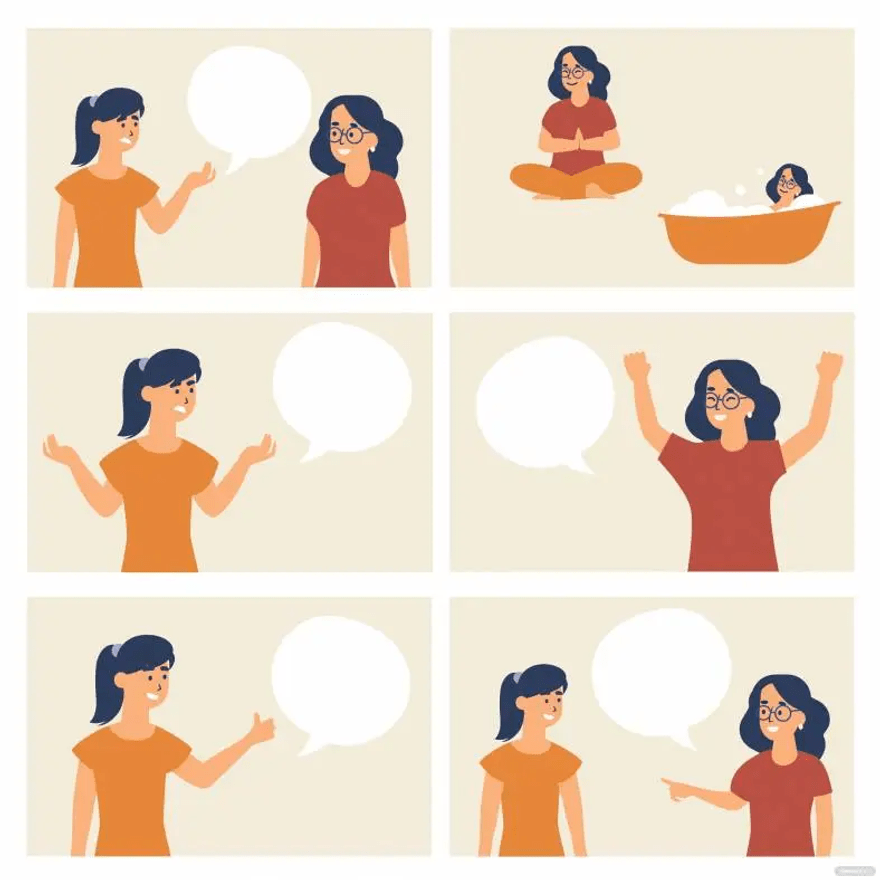 There are numerous comic strips that tackle stories that define the daily lives of people. A great example of this is a life comic strip. They can be heartwarming in nature, informative and educational all of which aim to impart teachings and guidance to the readers. 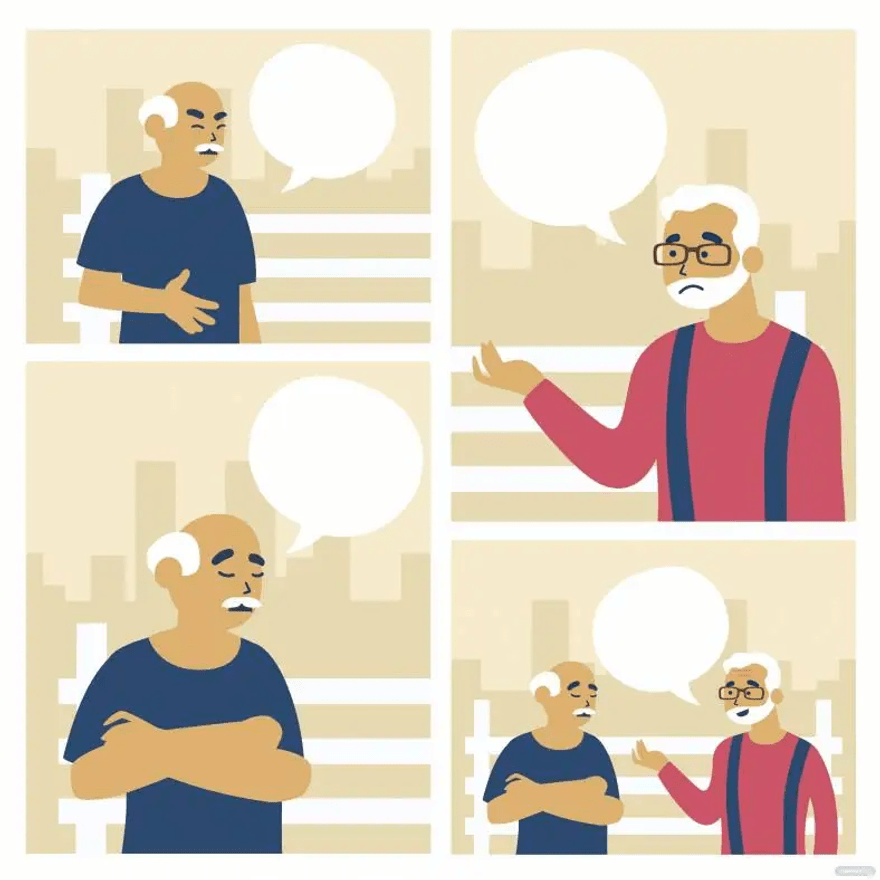 A fashion comic strip is a fun and unique way of showcasing the latest fashion trends. Talking about this through a comic strip will keep readers visually entertained with some witty storyline and great graphics. Comic strips like this can be used as an informative marketing tool to keep customers engaged. 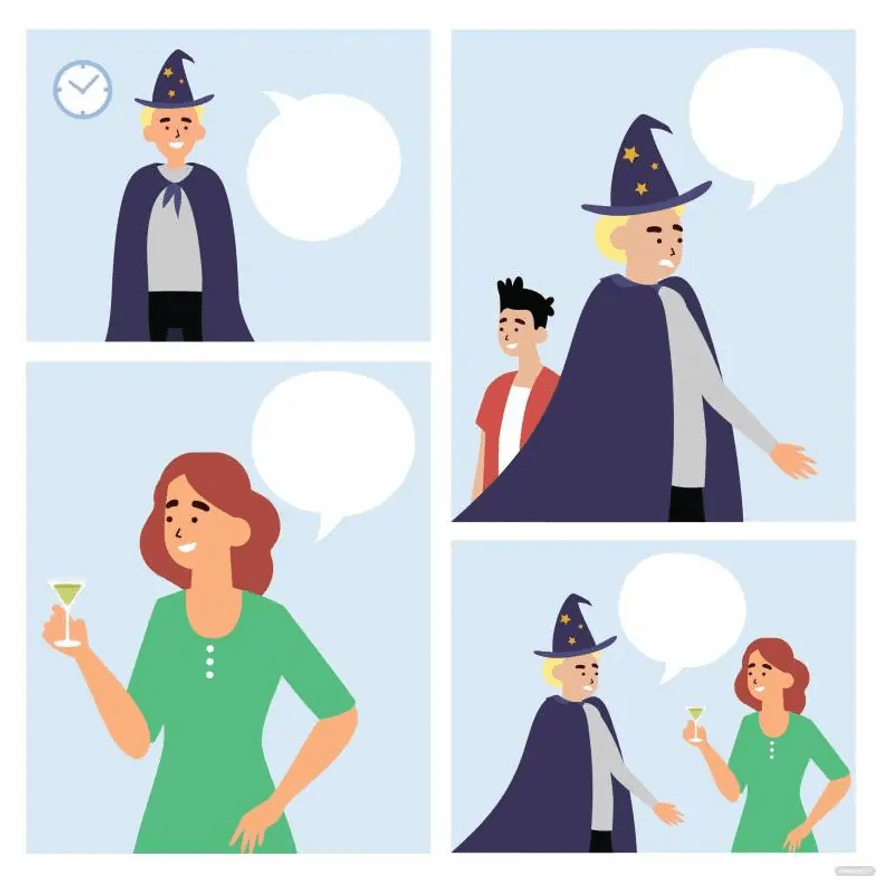 An education comic strip is a fun and suitable way of teaching children and adults. This could be incorporated into a poster on the school grounds or posted on a website. Plus, younger children are bound to understand their lessons better when done through visual aids such as comic strips. 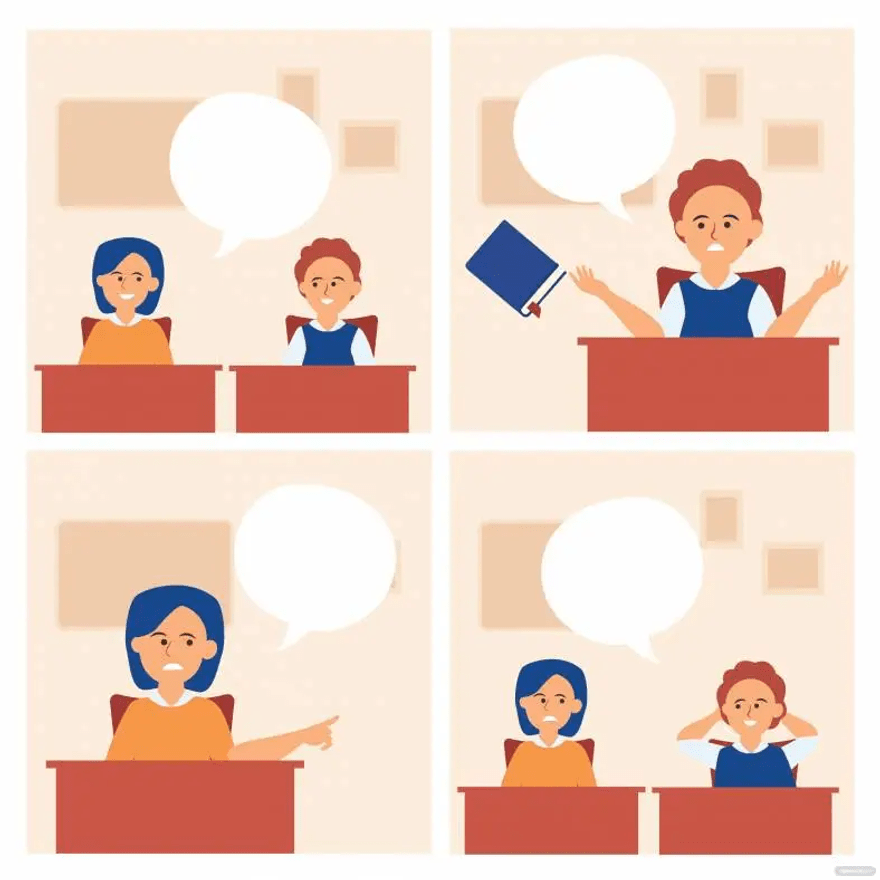 Need a unique yet funny birthday present? Then, surprise the birthday celebrant with a one-of-a-kind birthday comic strip. Create an amusing plot and characters which including the celebrant, of course, that will fit with the birthday theme. 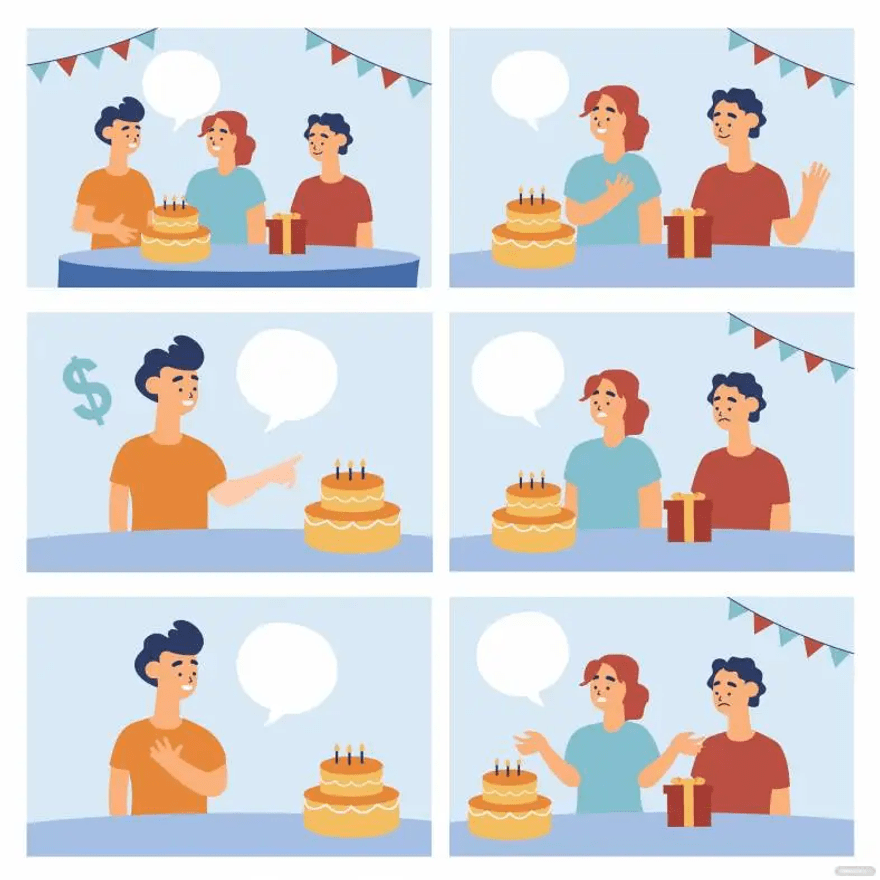 Interestingly enough, a friends comic strip is one of the most popular storylines in the comics industry. It’s easy to understand—more importantly, relatable to a lot of readers. A story about friends could be told with jokes, action scenes, or a depiction of a slice-of-life genre. 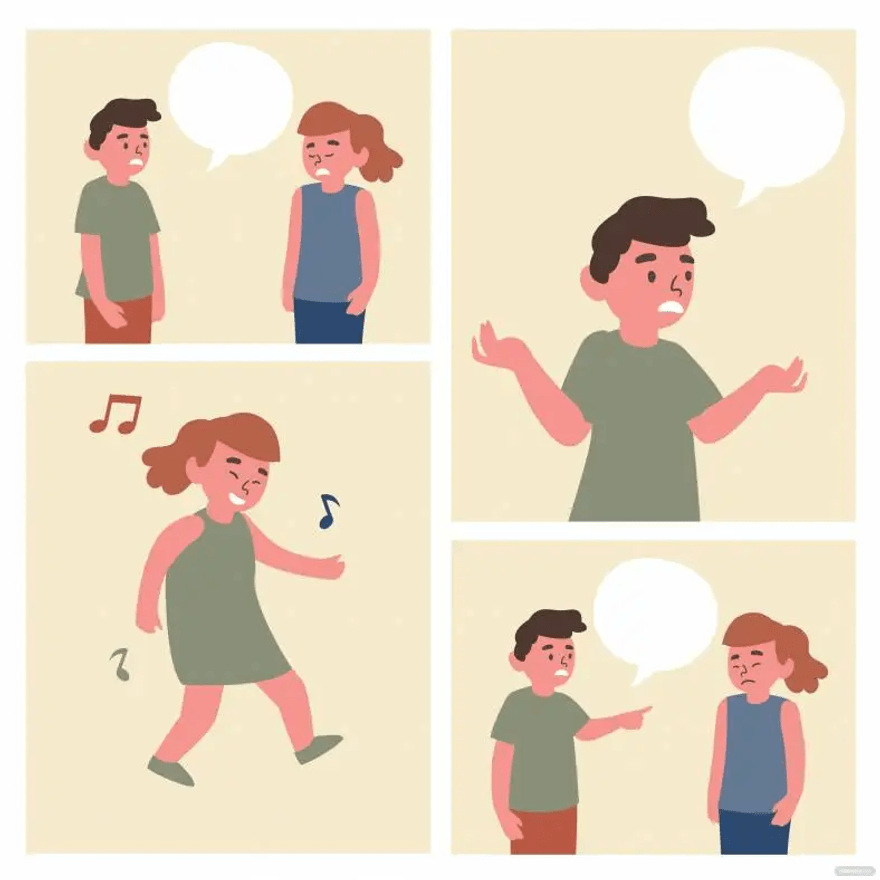 Sometimes a comic strip does not need lots of words to convey its message to the readers. Just like this enumeration comic strip which is designed for exams, particularly for grade school students. Or, you could use this type of comic strip for instruction manuals or safety handbooks. 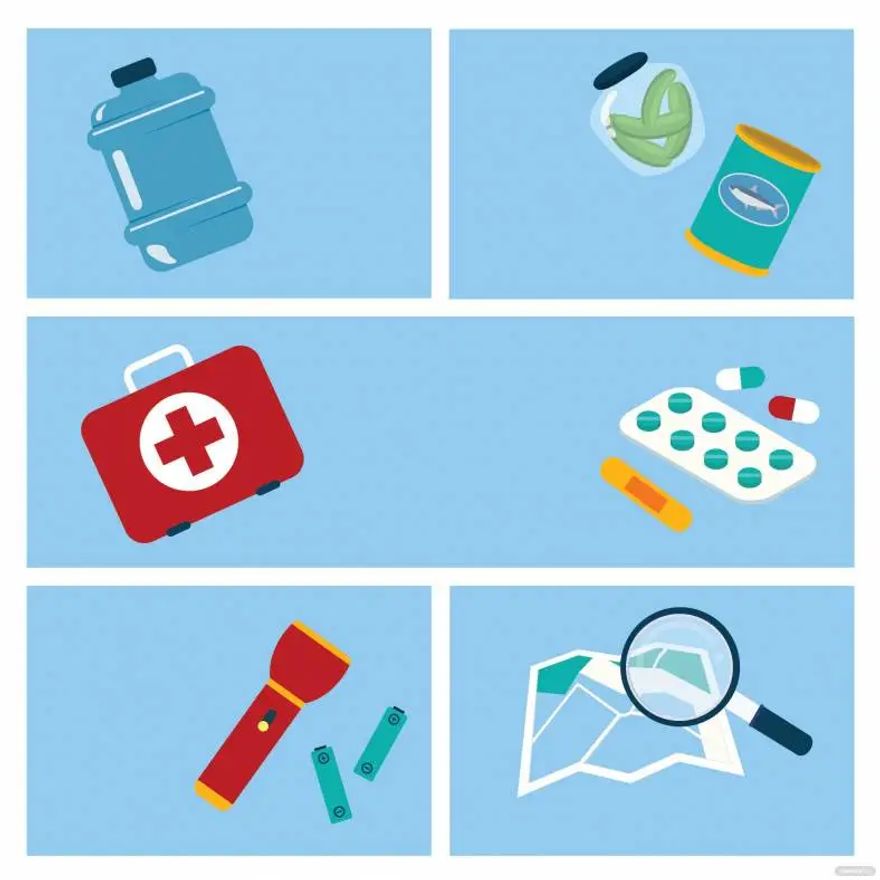 A cartoon comic strip is synonymous with comic strips as this is the platform used to create plots, draw and design superheroes like Batman, Superman, and Marvel characters and not to mention where Japanese comics or manga began. They follow a lot of genres from humor, slice of life, action, and mystery, to horror, which makes them widely popular with readers of all ages. Below is a good example of such a comic strip. 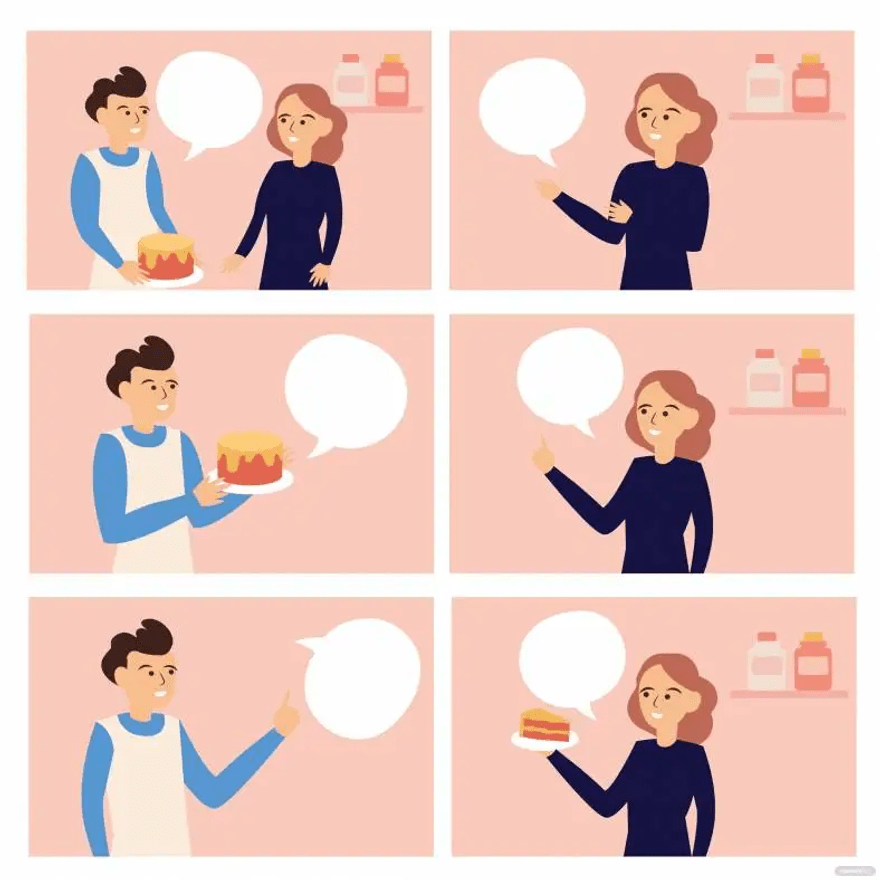 A love comic strip is another popular story plot with a large number of readers. This kind of comic strip tackles stories about relationships, heartbreak, and new beginnings. To some, it could be quite relatable hence its popularity, and let’s face it a lot of us would love a bit of drama. 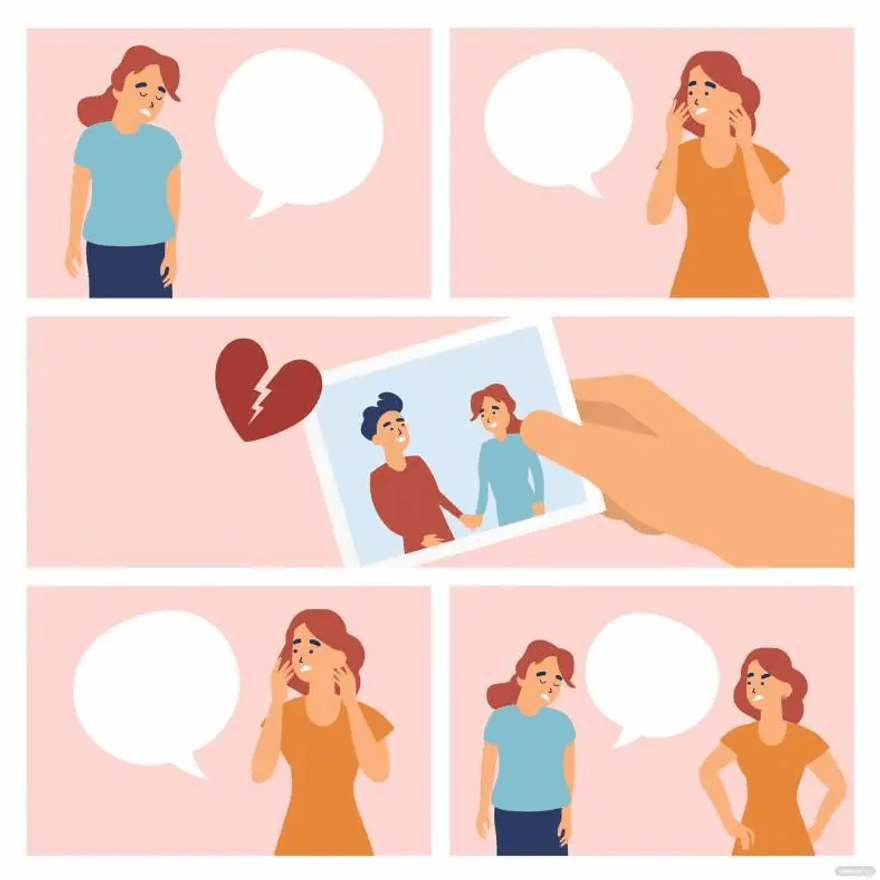 An office 6 panel comic strip is a type of comic strip presented in 6 boxes or panels. Its usual plot is all about office-related concerns or it may tackle work-related issues. This is designed to entertain or educate its readers about different office musings or feature an employee’s daily work activity. 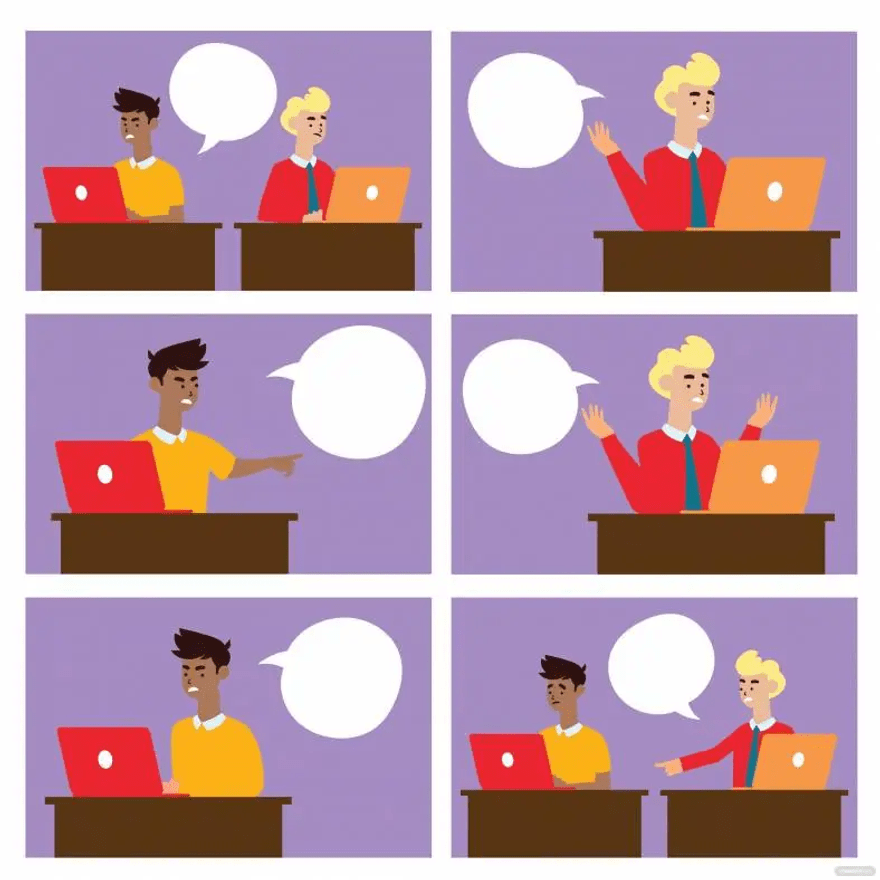 Most of the time comic strips are created as a source of reading entertainment as most people find stories with graphic images more amusing and easier to understand. Whether these are presented in black and white or in multicolor, comics offer visual entertainment thus making them one of the most popular reading materials of all time. Because of its popularity and its ability to reach a wider audience, comic strips have other important uses as well.

A comic strip is developed because an artist wants to tell a story and not just through words but through art and illustrations which makes it more interesting to readers. The use of words and drawings is equally balanced in a comic strip in order to create each scenario.

Comic strips are designed to entertain readers thus they come in different genres, plots, and a wide variety of characters. They are also used to educate and raise awareness, which is done in a creative manner. Comic strips tend to communicate information and because it has visuals, they would give readers a better understanding of the plot.

Books are not the only materials that can enhance your reading comprehension, comic strips can also help you become a better reader. Not all comic strips contain jokes, some tackle serious issues which can be quite beneficial to the reader.

There are a lot of things you could learn when reading a comic strip because it deals with a wide array of genres, most likely you’ll be able to learn a new word or perhaps give a better understanding of a certain culture. Because comic strips are quite accessible nowadays, readers have a chance to read through different kinds of comic strip story plots with a wide variety of graphic images.

A lot of newer comic artists get their inspiration from the comics they used to read in the past. Comic strips help inspire creativity because of the exposure you get to reading various genres, this will help you sharpen your skills in drawing and writing.

Whenever you find yourself in a reading slump or if reading a book with pure text isn’t your thing, then perhaps reading comic strips can increase your motivation to read. Not only is it entertaining but it helps you understand the scenarios and each plot because of the images.

What’s In a Comic Strip? Parts?

A comic strip is made up of a series of panels or boxes, which are used by artists to draw and write down the comic’s content. These panels are of different sizes, usually boxed shaped, and may come in at least 2 or 3 panels per row.

Developing a plot gives a comic strip life where the artist incorporates this in a series of drawings and dialogue. A comic strip may have one-short stories or continuing storylines.

A comic strip is never complete without its character drawings and background. These graphic images provide visuals to the storyline.

A dialogue creates interaction between the characters which helps readers understand where the story is going. Although there are comic strips that are purely just made up of graphics which is enough to tell a story, so adding dialogue can be optional.

Comic strips are designed in black and white or in full color. In some cases, a combination of both. 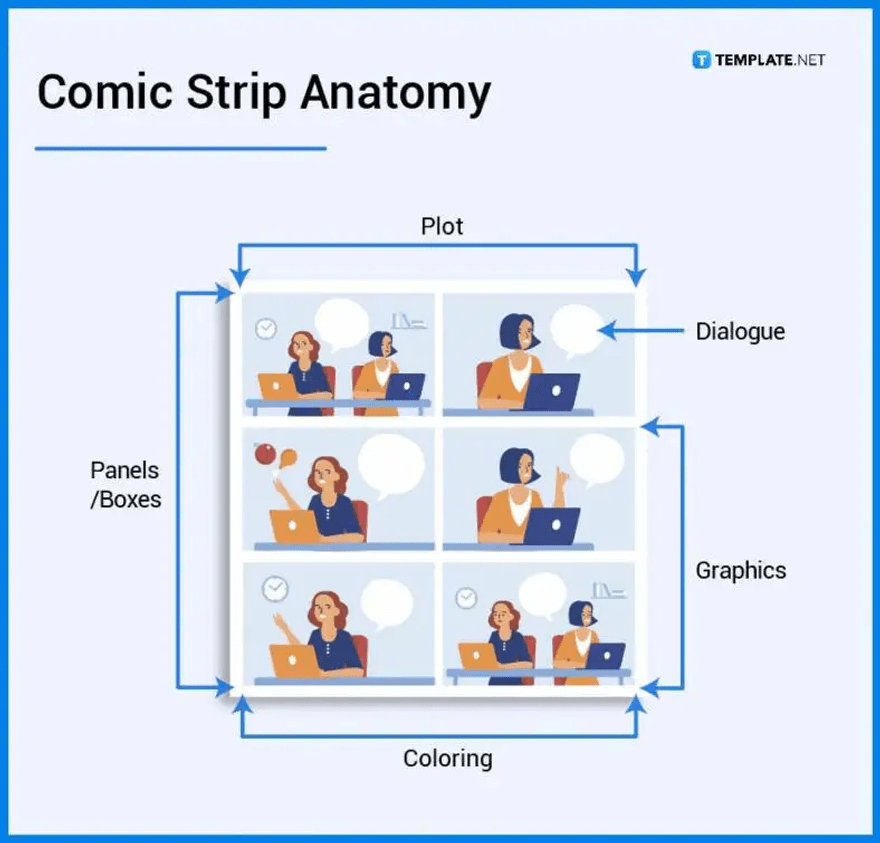 How To Design a Comic Strip?

2. Decide on the theme or genre of the comic strip. 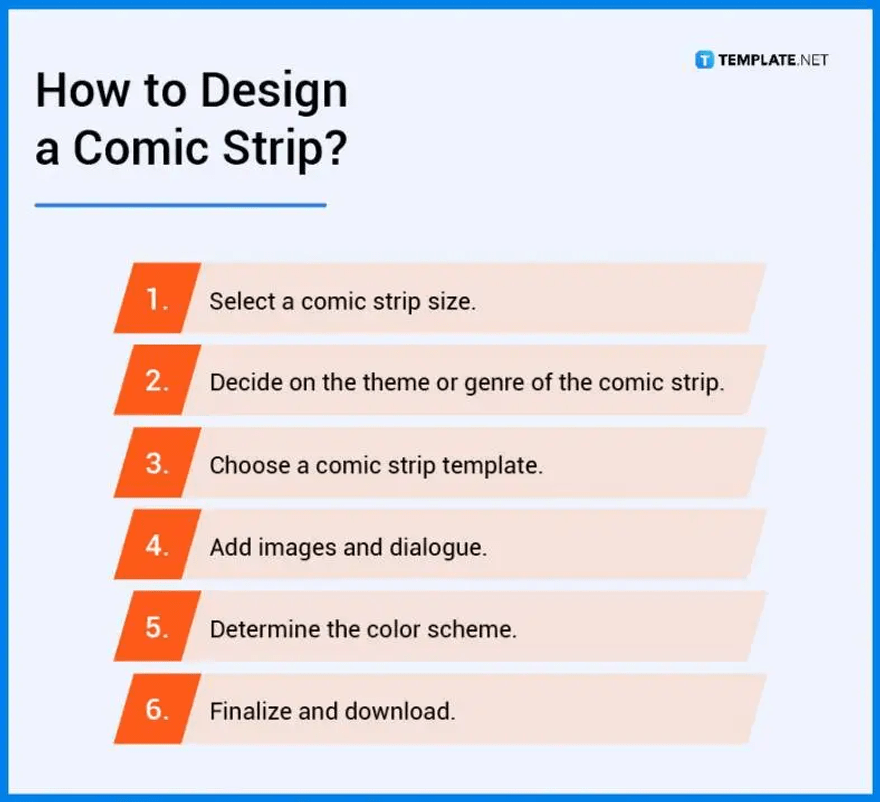 A comic strip is a small comic that is made up of 2 to 4 frames. This is commonly published in newspapers and magazines and could be read on a daily basis.

A comic book on the other hand is a series or collection of comic strips gathered all together in a book or a comic magazine. This consist of several pages which typically tell a single story in a few panels or else a segment of a continuous story. In most cases, comic books are published on a monthly or quarterly basis.

What’s the Difference Between a Comic Strip, Graphic Novels & Story Board

A comic strip features cartoon drawings and dialogues that are written down in speech bubbles.

Graphic novels are similar to comic books yet their distinctive feature is that these are generally stand-alone stories with more complex plots. Graphic novels cater to fiction, non-fiction, and anthologized work.

A storyboard is a series of drawings drawn inside a panel is designed to show how a movie, video, book, or advertisement will go.

Comic strips come in a variety of sizes, whether you need to print, upload this online or publish this in a magazine or newspaper. To give you an idea for your latest project here are the following comic strip sizes for easy reference. 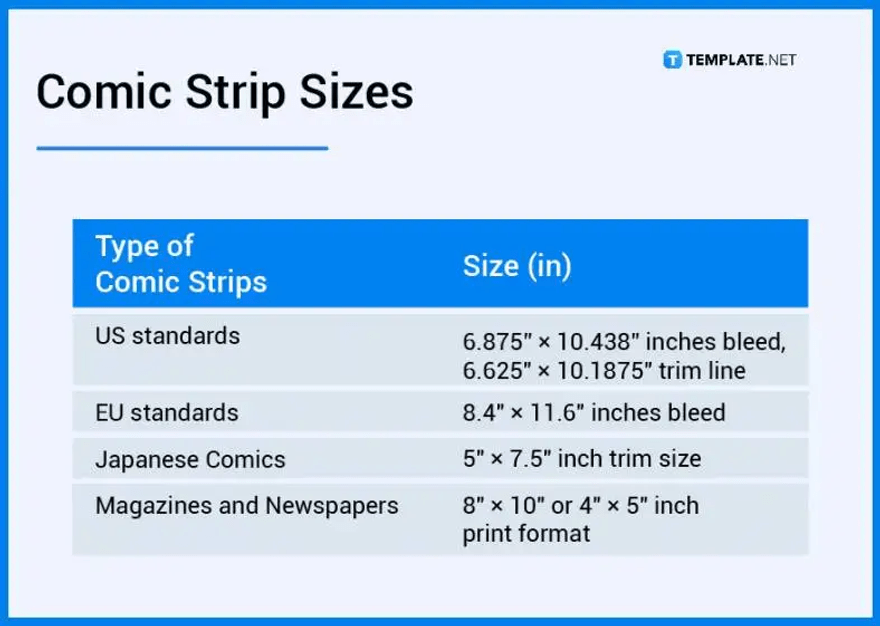 Get imaginative and showcase your creativity with these comic strip ideas that will help you build an engaging comic strip for your readers.

What Makes an Interesting Comic Strip?

What is the Structure of a Comic Strip?

The basic structure of a comic strip is the beginning, the middle scene, and the end scene which highlights the resolution or character’s reaction.

What Should be Included in a Comic Strip?

A basic comic strip should include a plot, a drawing of a character or a scene, and in most cases dialogue is written down in speech bubbles.

What is the Oldest Comic Strip?

The oldest comic strip and is still being published is called The Katzenjammer Kids, which started on December 12, 1897.

What is Similar to a Comic Strip?

Comic strips are sometimes referred to as funnies, cartoon panels, or graphic novels and they share slight similarities to storyboards.

What are the Boxes Called in Comic Strip?

These boxes are called frames or panels.

How Do You Make a Comic Strip Virtual?

To create and publish a virtual comic strip online, you must start by opening an editing tool like Photoshop or Illustrator, upload or select a comic strip template, work on your content (from your drawing images and dialogues), save it, then, upload it on the web.

What are the Parts of a Comic Strip Called?

The parts of a comic strip are called panels or frames which hold each section of the comic strip, including its images and dialogues.

What is a 3 Panel Comic Strip?

A 3-panel comic strip is short and easy to create, consisting of 3 frames, and is constructed of three simple elements: a set-up, reinforcement, and a punchline.

Why Bristol Paper is Used for Comic Strip?

Artists love using Bristol paper because it is smooth and durable which allows smooth ink coverage.