For employees, making sure that their boss knows that they’re appreciated is always going to be a good thing. If the boss knows that he or she is beloved or even noticed by others, then that could mean the difference between having an employer that will take care of his or her workers, or one that couldn’t care less.

So how are employees supposed to go about in showing their thanks to their bosses? Well, one of the easiest ways to do that is by coming up with an appreciation letter and this article is going to teach you all that you need to know in order to make one. 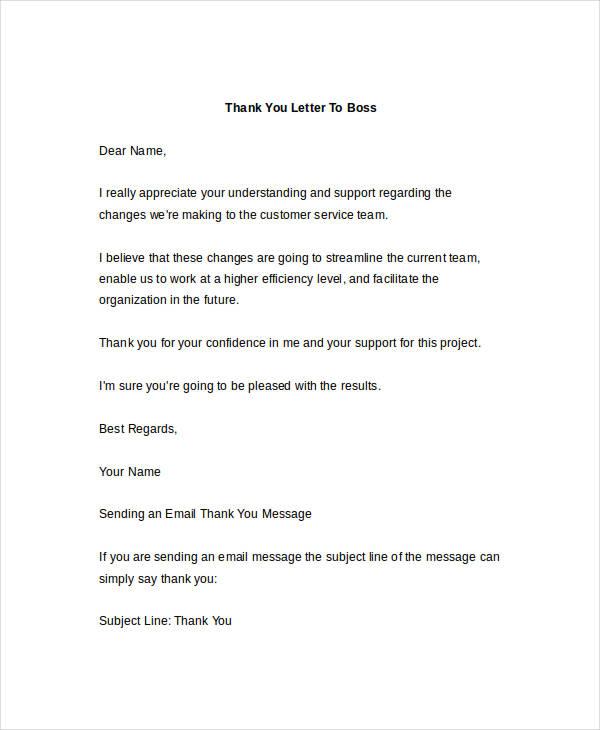 Appreciation Letter to Boss for Bonus 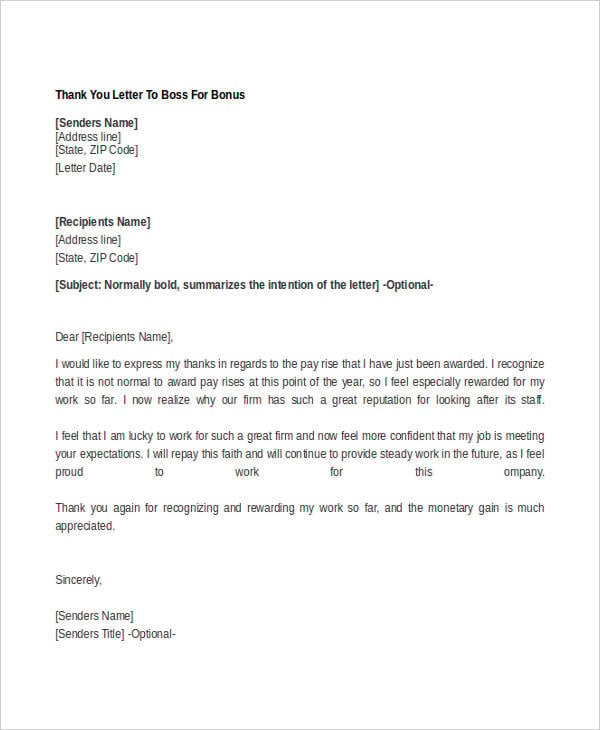 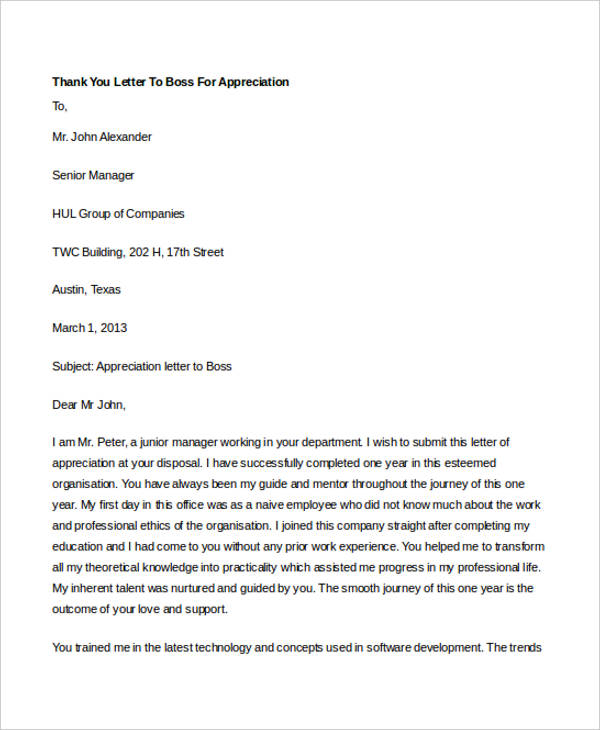 Appreciation Letter to Boss for Promotion 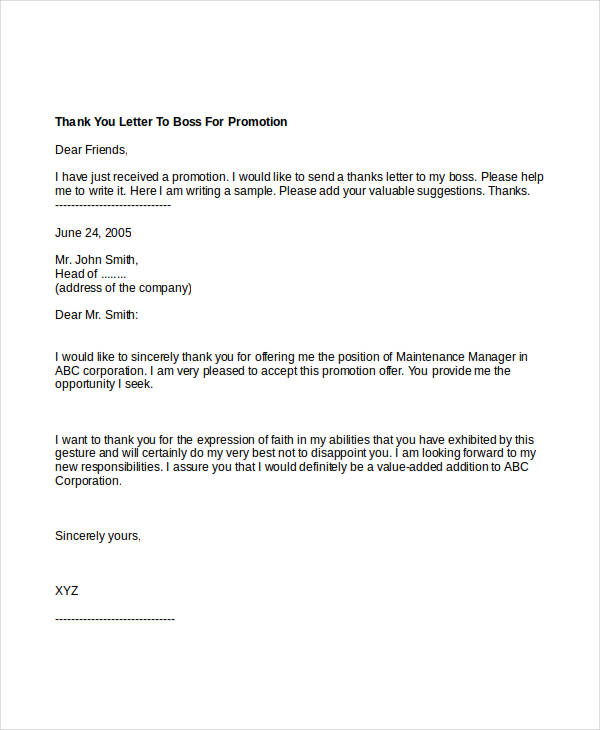 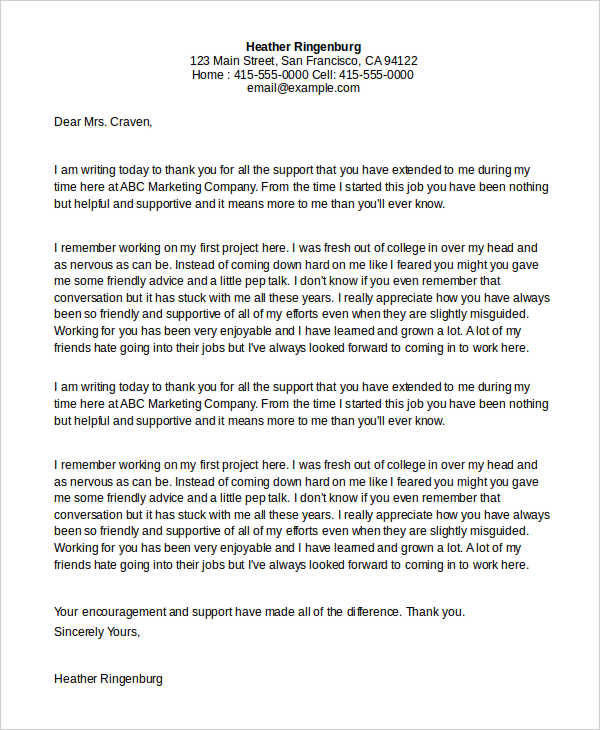 The Benefits of Making an Apprecation Letter to Your Boss

There are a lot of things that just about every employee can gain by showing a little gratitude to their boss. Here are a few examples:

How to Create an Appreciation Letter to Your Boss

Now that you’ve learned what an appreciation letter to your boss can potentially do for you and your co-workers, then the next step is to learn how to make one. Remember that the letter’s entire purpose is to thank your boss for what he or she has done, meaning that you’ll want to do it in a way that shows genuine gratitude.

With that in mind, here are the steps that will allow you to come up with a proper appreciation letter to your boss:

Make Sure to Include the Title of the Letter

The first and one of the most important steps to take when making this letter is to make sure that you are able to write down the title. The reason as to why you would need to do this is because you want your boss to have an idea as to what the letter may contain before he or she even goes through it in its entirety.

So when coming up with the title, it’s usually best to stick with something that’s straight to the point and professional. However, assuming that you and your co-workers have a close relationship with your boss, then you can go with a more creative title. Just make sure that the wording is appropriate and you shouldn’t have any sort of problems.

This should be pretty obvious but it’s important that you don’t forget to write down the name of your boss that you’re trying to thank. This makes it clear as to who the employees are appreciating. Also, should your boss decide to show it to someone other than those in the office, then those who read it will see that the letter is thanking exactly who they should expect.

So what you’re going to do is to write down the name of your boss. When you decide to do so, it’s important that you remember to write down his or her complete name into the letter. Again, you want to guarantee that readers know exactly who’s being thanked, giving you all the more reason to ensure that you write down your boss’s name completely. Include the first name, last name, and middle initial so that there’s no way to mistake thanking someone else.

Also, be sure to check on the name’s spelling before finalizing the letter. You don’t want to end up thanking the wrong person or to show an embarrassing mistake to the person that you’re trying to thank now do you?

Write the Date as to When the Letter was Made

Next is that you’re going to want to include the date in which the letter was made. Your boss might want to remember the letter his or her employees made and possibly show it to friends or family. When that happens, providing the date may just come in handy as your boss might just be able to locate the letter with that information alone.

So when writing the date, be sure that you are able to include the day, month, and year. It’s better to follow the date format that everyone around you is used to. This should make things much easier for your employer.

State What the Boss Has Done to Receive the Appreciation Letter

The next step is the one that’s arguably the most important. If you were to receive a letter that contains statements of “thanks” from different people, then you’ll obviously want to know what it is that you did that made them want to do it, right? Well, your boss will feel the exact same way. So you are going to have to provide a good reason as to why you’ve made the letter in the first place.

Think, what is it that your boss has done? You’re going to have to be very specific when doing this and you have to explain it in a way that just about any person can understand when they read what you’ve written. Did your boss take out the whole team to lunch? Did he or she help improve everyone’s performance? Is there something that your boss did that helped the company? Just point out what was done and do so with a respective and appreciative tone.

Remember, your boss will most likely want to show this to his or her colleagues, friends, and family. So if you don’t provide an ample reason as to why your boss is being thanked, or if you do so in a manner that can be considered as rude, then the point of the letter will be meaningless.

Point Out Who’s Thanking Your Boss

The person that will be receiving your letter will want to know who made it. Which is why it’s important that you’re able to point out the names of all the people that are involved in the creation of the letter. This will let the boss know exactly who has taken notice of his or her hard work and those who are grateful for it.

So when you’re doing this, you can decide to write the names of the employees individually, or you can simply state that everyone in a particular department or even that in the entire office is showing their thanks. It’s best to go with the former option should there only be a handful of people that wish to thank the boss. Also best to write down their individual names so that the boss can better appreciate these people.

If it’s the latter option, then you may simply state the the letter was made by everyone and be straightforward about it.

While all of this may sound tedious, it’s best to still do this as even a simple thanks can go along way.

In the even that you would like to learn about the other types of appreciation letters that you can make, then all you have to do is to go through our site. It has many different articles, all of which should have the information that you’re going to need. Just be sure to read the ones you’ve chosen thoroughly so that you can make the most out of what they have to offer.